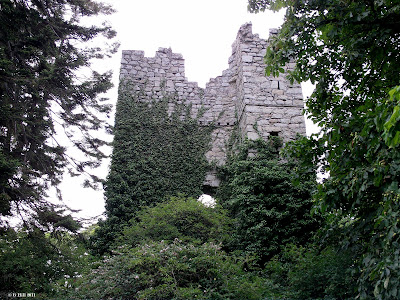 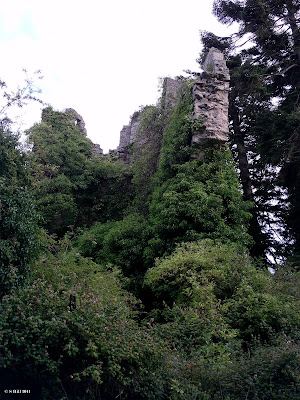 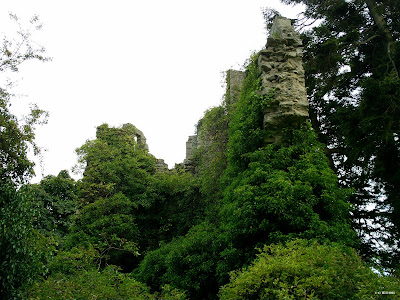 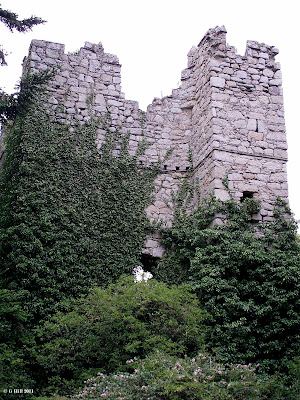 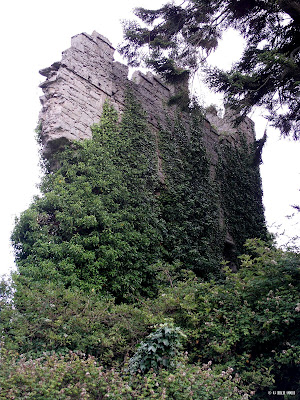 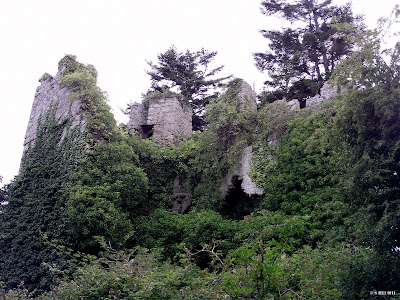 Kilgobbin Castle was constructed in Norman times and was passed from the Hacketts to the Walsh family in the 15th century. It was one of several Castles along the boundary of The Pale, the others included Bullock Castle in Dalkey and Carrickmines Castle, which is now unfortunately buried beneath a motorway. Kilgobbin was occupied by a succession of Walsh generations until 1641 when they were dispossessed. It remained occupied by several further owners until in fell into ruin in the mid 1830's.
The Castle is basically a tall square tower structure. Over the years it has been invaded by ivy and now only two of the walls still fully stand, the rest buried beneath the vegetation. It was last occupied in it's semi-ruinous state by a derelict old man who made somewhat of a shelter out of it. Since then the only rumoured occupants are the spectres of a man in heavy clad armour and a white robed woman carrying something unknown in her arms.
The Castle now sits in it's ivy bed just behind the walls of a private house on Kilgobbin Road. We located it from a posting on the Internet by a visiting tourist who drove into the property on hearing of the existence of a castle and was promptly greeted by a large Dog on the lawn. Needless to say he left quickly without exiting the car.
We arrived and parked at the gate pillars and had a look inside the open gates. To the left, at one end of the large lawn, stood a large house and on the right a clump of trees, This was, we were sure, where the ruin was situated. On the steps of the house sat a large hound as was mentioned by the previous visitor and although not moving, eyed us warily. I felt if we took one step further he'd be on us in an instant. Not wanting to get savaged or to chicken out, we had to make a decision. On one of the gates was an intercom, so I pressed the top button and actually got hold of one of the owners. Once we explained our position they said it would be no problem and even offered to take the Dog inside while we were there.
That said, it didn't take long to look around. The Castle is inaccessible due to the very thick and thorny vegetation which has been allowed to grow around. You can't blame the owners as otherwise it would more than likely be a magnet for anti-social activity. The sheer height of the Tower remains fully evident and it must have been quite imposing in it's time.There were no signs of the aforementioned ghosts but all the same it was well worth seeing, especially as it is so well hidden now from the public view.. I don't know of any right of way for the public since it is lies on private ground and though the gates seem always open, we would suggest that if  visiting, to ring the intercom first.
To find the Castle, take the R117 from Sandyford towards Kilternan. At Stepaside, take the left hand turn at the Garda station onto Kilgobbin Rd. Just after Kilgobbin Lane there is a bend in the road. The gates to the property are on the left at this bend.
Posted by Castlehunter at 12:56