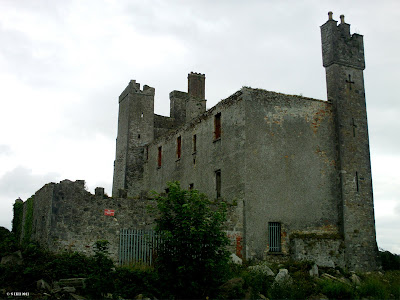 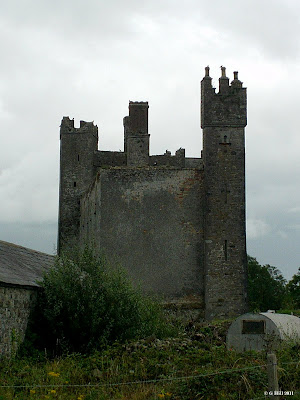 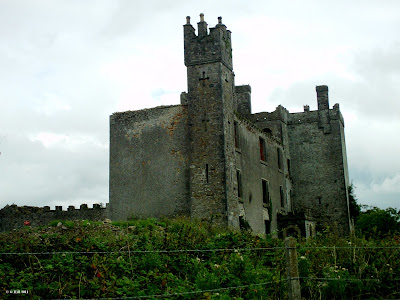 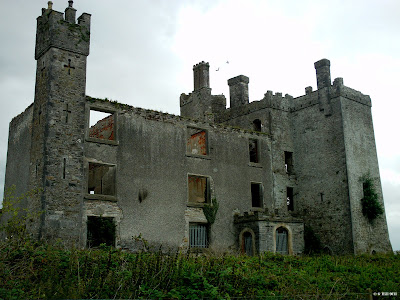 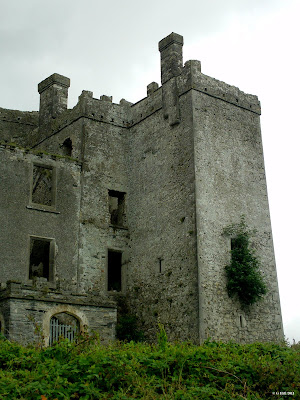 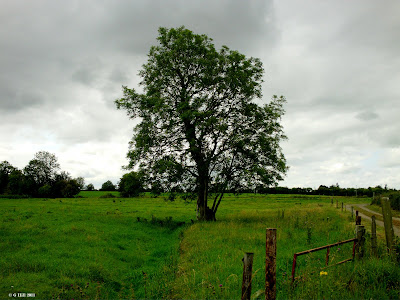 Above Image: The Hanging Tree? 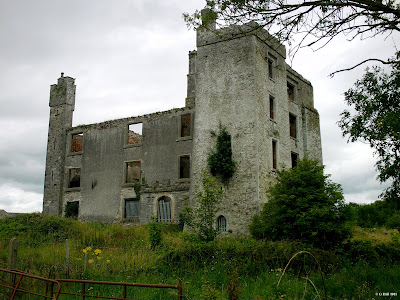 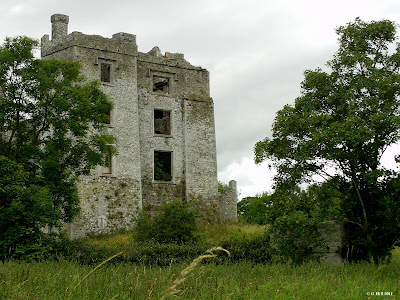 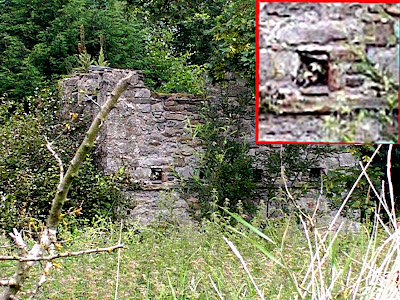 Above Image: The Ghostly face? Enlarged in the top
right hand corner 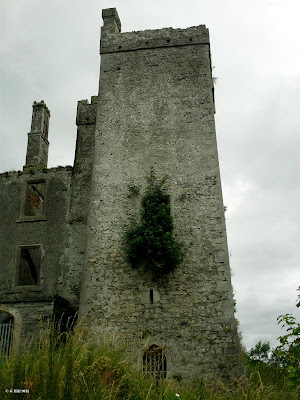 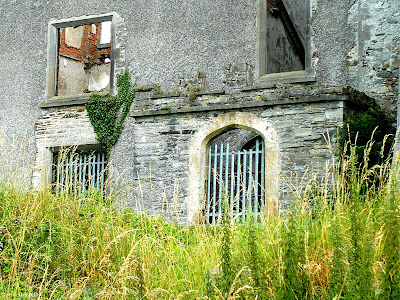 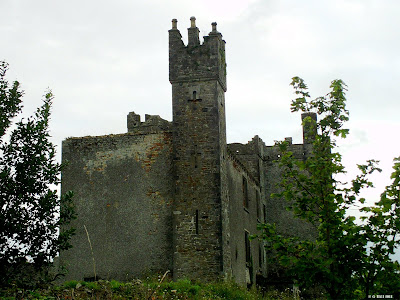 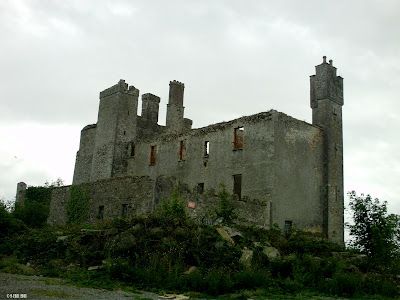 Athcarne Castle is situated in an area of Co Meath known as Eastmeath.The Castle comprises of an Elizabethan Tower House, a three storied mansion and a corner Turret. The original Tower & Mansion were built by William Bathe in 1590 and the Bathe family resided there for many generations producing some notable personalities in the Legal and political arenas. The Castle lies just six miles from the site of the Battle of the Boyne and it is said that James II stayed here on the night before the event.
In 1830 a turret was the added  making the existing structure an even more formidable building. The last occupant was James Gernon who lived there until the 1950's when the building was partly demolished and has stayed in a state of dangerous ruin since.
I have to say that we have been to many Castles and Abbeys where we felt uneasy, but this place had a distinctly foreboding air about it. The Castle is very much hidden and wasn't easy to find, but eventually down a narrow grassy lane we saw a part of the turret peeking through the tree branches. We pulled up outside a padlocked gate and a sign saying Danger, keep out. The Castle is in a high state of disrepair and there is a lot of rubble around it's base which was put there by the OPW in the 1980's from an old church demolished elsewhere, so it's not surprising that the public are encouraged to stay away. The gate was locked, but you could climb over and take a quick look, There were a number of nearby Dogs barking so we did not want to draw undue attention. We found another gate at the top of the lane which had an open padlock on it and this led you around the back of the Castle where although it is fenced off from access, you can get amazing views. We noticed a stagnant pool of water at one point and this it seems is all that remains of a boating pool.
Legends about the Castle include cries of dying soldiers heard at night and the spectre of a hanged soldier on the great Oak tree adjacent. The most disturbing tale is a recent one by a local worker who claimed to have seen the face of  "a demented girl with blood covered hands"  All very disturbing indeed. On looking at our photos later there is one image (shown above) where it seems there is there is someone odd looking at us through the left hand aperture of a ruined outer building. Enlarged it becomes more odd. Apparently this was a storehouse called the "Shell House" and these apertures may have carried roof timbers so they are not very large which makes it all the more strange.  Needless to say after a short while we began to feel it was time to move on as there was a definite feeling of not being wanted there. Nobody (Human) disturbed us on our visit. We would recommend a viewing but certainly not just before or after dark.
Athcarne is but a shadow of it's former self, a derelict insanity seems to haunt it and it stands jagged and unwelcoming.
To find the Castle on the N2 to Slane take the right hand turn at Balrath Cross for Duleek.  The 2nd right hand turn down this road will lead you down a Cul-De-Sac. About halfway down a small lane way veers to the left. Take this route and you will find the Castle at it's end.
This one is dedicated to you SRBO.
Many thanks to "Saoirse" for the amended local information. We are only sorry we didn't get to speak to you on the day! 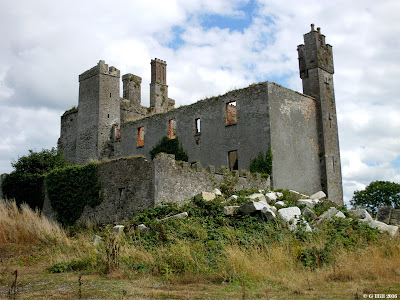 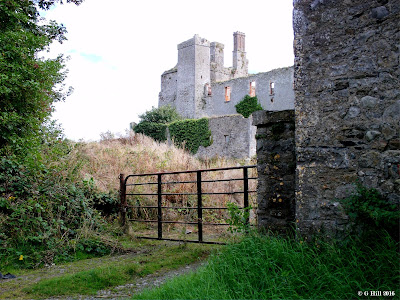 Above Image: The entrance gate. Gap to the left hand side 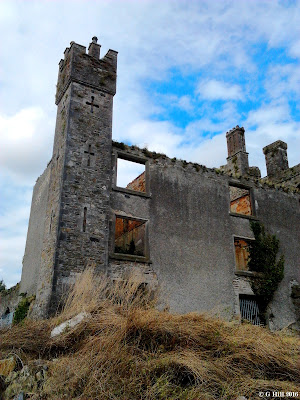 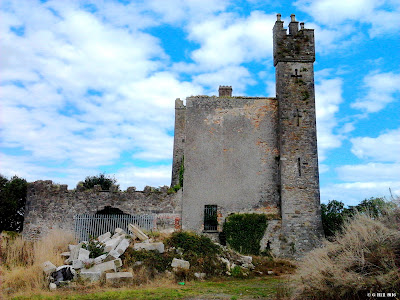 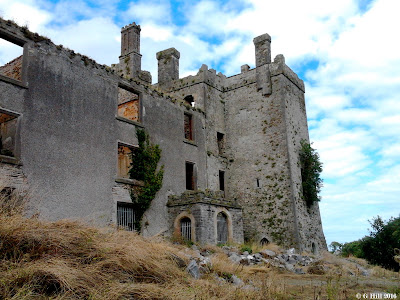 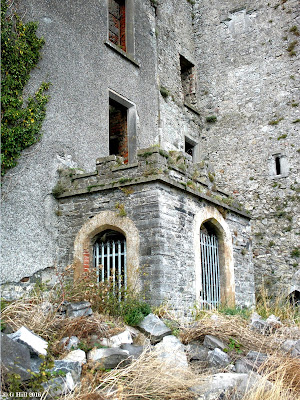 Above Image: Rubble blocks the entrance 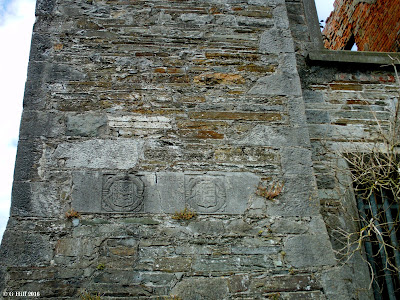 Above Image: What appears to be family crests 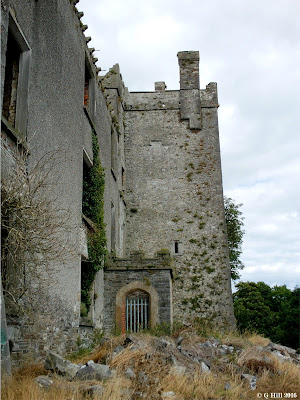 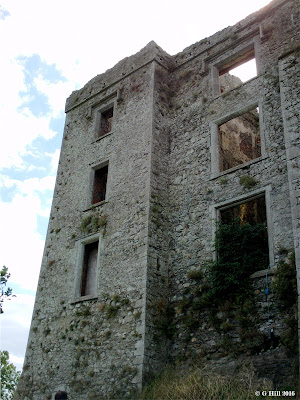 Above Image: The rope dangling from the bottom right
corner of window 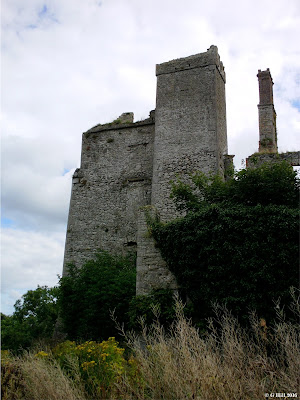 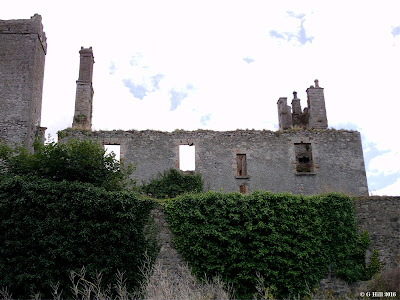 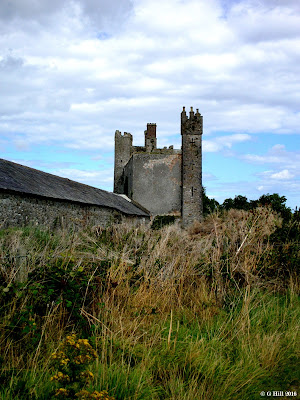 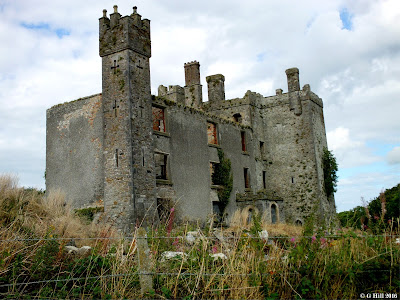 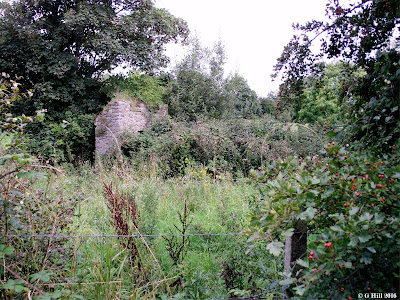 Above Image: Remains of the shell house 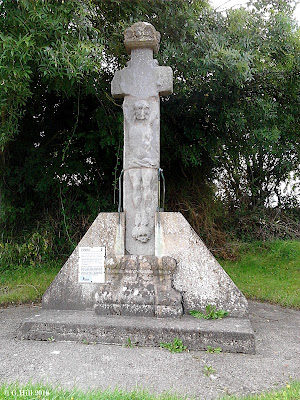 Above Image: The Way Cross

I have been meaning for a while to return to this interesting ruin and hopefully get a closer look than on my initial visit. So on a fine late Summer afternoon we found ourselves again at the rusted iron gate leading to Athcarne Castle. The old "Danger Keep Out" sign was still posted way above anyones line of sight so you wouldn't even notice it. Surprisingly we didn't have to clamber over the gate as the overgrowth to its left hand side had been cleared and there was a gap you can easily walk through. The site is used by the State as a storage facility for stone blocks hence the adjacent sheds in the courtyard. The site has been cleared somewhat so it is very easy to circumnavigate the ruins at close range although lots of large stone blocks and rubble have been placed around the possible entry points to make it difficult to try and get in. The subject of "getting in" can now be safely said to be next to impossible as all of the ground floor doorways and windows have been gated up, locked with humongous padlocks and on top of all this wonderful "keep out cake" a topping of good old barbed wire for good measure! The one and only possible entry point is a window on the North East face which is positioned about twelve feet off the ground and is festooned with overgrowth. Yet there is a blue coloured rope dangling down from the sill where no doubt some young enterprising and probably foolhardy persons have succeeded in entering to God knows what sort of landing on the other side. The temptation of finding and climbing the still existing stone spiral stairs that lies within it seems will drive some to any measures. On this occasion I thought discretion was the better part of valour and declined the ropey challenge. I will admit that the idea of bringing along an extendable ladder did flit though my mind.
Regardless of the non entry this visit was a much more satisfying one. The shell house where I last seemed to capture a face looking out is now overgrown and so Mr Face will have to look out elsewhere.
The one thing that I can say is that I didn't realize how imposing a ruin it is up close. It literally looms above you on elevated ground with its windows like eyeless sockets forcing you to stare through them always drawing your attention to some derelict detail within. As mentioned before this castle is supposedly very badly haunted. Some of its residents are said to be the ghost of James II who stayed here before carrying on to hjs death at the Battle of the Boyne and a demented girl with blood dripping from her hands. Add in cries in the night of those being slaughtered in the Boyne Battle, a Spectre hanging from a tree and even the Devil himself who is said to have made an appearance here. A lot to worry about then and believe me even on what was a fine sunny day there was still an underlying unease about the place, not tangible enough to notice immediately but after a while sets about a definite feeling of not being welcome. Go when you can and go soon as the days are getting ever shorter and  in my opinion this would not be a place to be when dusk blankets over Athcarne's eerie dereliction.

On the Road from Balrath crossroads to Duleek where you take the second right hand turn for the Castle ruins there is a large stone cross to see. This cross was erected as a way marker in 1675 by Sir Luke Bathe and his wife Dame Cecelia Dowdall who were then residents of Athcarne Castle.