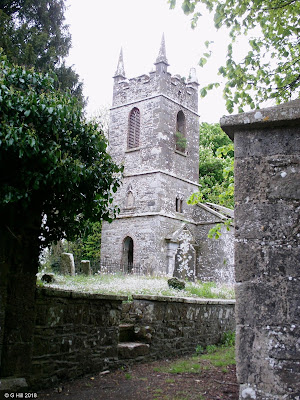 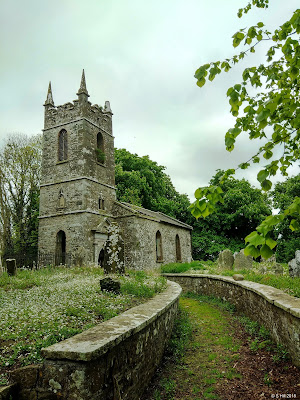 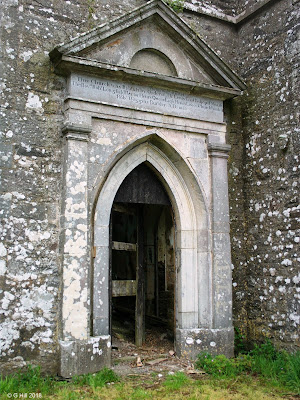 Above & Blow Image: The pedimented doorway and
medieval stone head 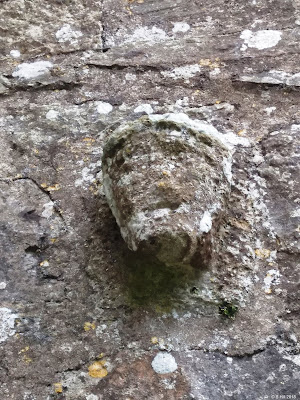 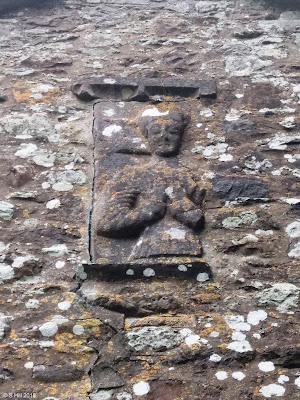 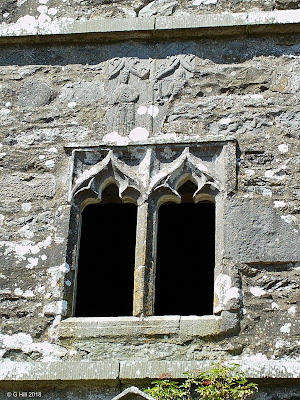 Above Image: The double ogee-headed window and above
it the other tomb fragment set in the wall. 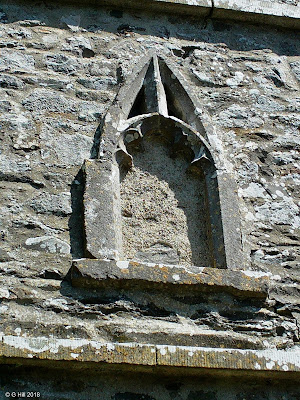 Above & Below Image: The remaining West and North
medieval windows. 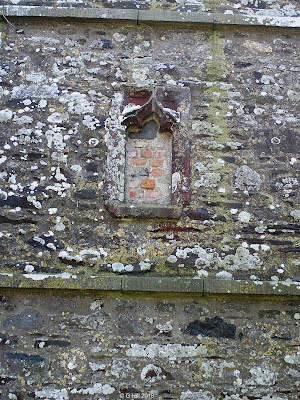 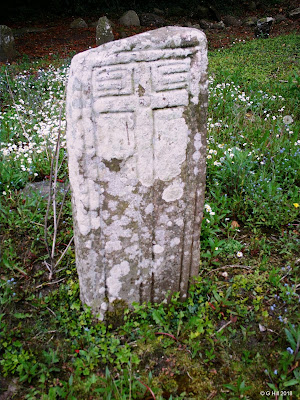 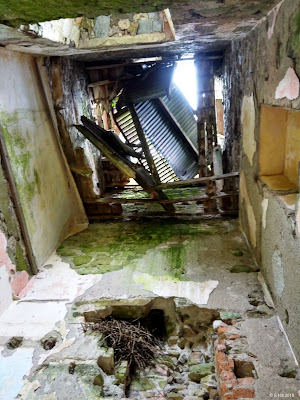 Above Image: A view upwards inside the bell tower 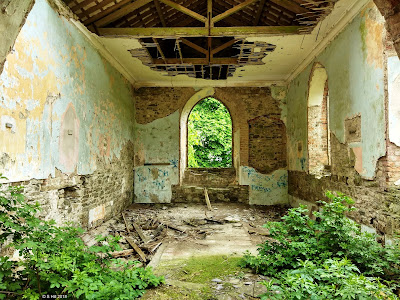 Above Image & 2 Images Below: The ruinous interior 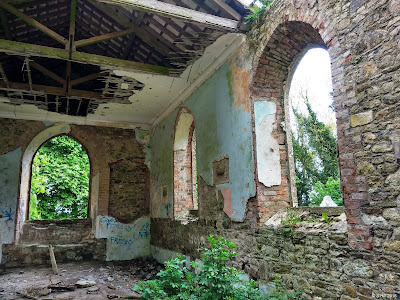 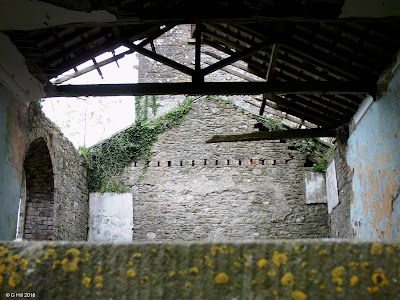 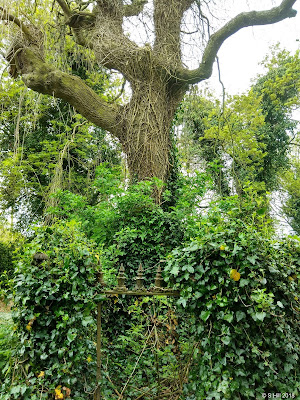 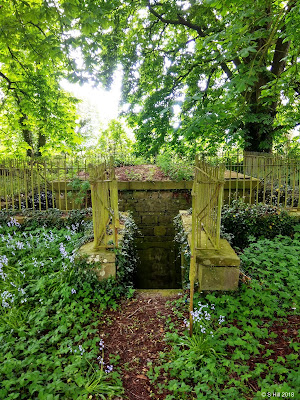 Above Image: The mausoleum 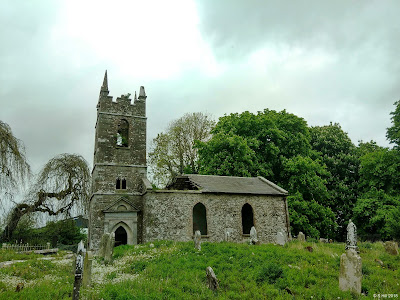 Again in a lonely place, this time in Co Meath we come across another abandoned Church of Ireland church standing derelict in an ancient graveyard. This was once the site of a medieval church which was in ruin by the early 1640's. This new Church was commissioned in 1820 by the then Lord Bishop of Meath Thomas Lewis O'Beirne who ran a Church building programme over a 25 year period starting in 1798. Some fragments of the medieval Church were included in the new building and these are as follows: the Pedimented entrance door, a atone head that projects from the wall to the right of the entrance door, three arched windows in the middle section of the bell tower and some fragments from a chest tomb, one in the East gable above the window and the other above the double ogee-headed window over the entrance door. The new Church was kept in use until services ended in the mid 1960's and it has now subsequently began to fall badly into ruin.
The Ruin of the church which was dedicated to St Patrick is accessible up a side road from the main road into the village of Nobber. The actual lane way leading up to the graveyard is what I term a "Hairy road" which is nothing more than a gravel track with a bank of grass running up along the middle. It was not a very comfortable drive up and an car exhaust problem (loose & missing brackets) a few days after the visit I think I can attribute to this road. If you are lucky to own an SUV then it's a doddle but be careful driving up otherwise.
My first impression of the ruin was how a bit uninviting it looked. I will admit I'm not prone to any form of psychic sensitivity but I got a feeling here that I have had in several other places and it is a bit unsettling. However I have never shirked from continuing an investigation uncomfortable or not and so onward we went regardless.
As the ground of the graveyard is at a higher level than that of the church the pathway leading up to it is walled on both sides. This brings you to the door and above it is a plaque dedicated to those involved in the church construction. The curious stone head is at a height to the right of the door protruding as if like a watchful sentinel. The wooden door is still mostly extant frame-wise anyway and has been forced open. It is jammed halfway due to fallen rubble from the bell tower and indeed stepping in and looking up there is still much loose debris to be seen. I am quite surprised that the doorway has not been bricked up for safety reasons as something could easily come down upon you. However I was also a bit glad that we could still get inside to have a look.
The interior of the church is now a mess of  fallen rafters and crumbling plaster. The roof is fifty percent gone and the rest probably wont be too far behind. It looked to be well lit building in its time with light streaming in from the large arched windows in the South wall and East gable. It seems a sad place now and quite desolate only echoing within its walls the sound of some birds in the bell tower.
We walked outside and my son went to investigate the sunken mausoleum at the rear of the graveyard which has steps leading down allowing you to walk around its perimeter. I remained standing outside the Church door and again I got that unsettling feeling especially as there came what sounded like footfalls on the debris in the Church interior coming closer towards the doorway behind me. I stood and waited for the arrival of  whomever or whatever it was but no one came. The footfalls ceased and the atmosphere returned again to just the distant sound of the bell tower birds. Definitely a little eerie I might say.
Opposite the bell tower's West side among the ancient graves is a excellent stone grave slab standing about a metre high engraved with a simple framed Latin cross. It was a particularly interesting find in this somewhat foreboding location. I found the visit here very interesting and atmospheric especially with the additions of the medieval remnants. Apparently there is also a stone Knights foot part of an effigy from the medieval period somewhere in the graveyard but it unfortunately remains elusive at the moment.

To find the ruin take the M3 heading North and after junction 10 the motorway ends at a roundabout.
Take the third exit on this roundabout and then the first exit on the subsequent roundabout following the signs for the N52 to Dundalk. Drive straight through the next two roundabouts and then on the third take a left again following the N52 for Dundalk. Continue on this road for approx 12KM  through Carlanstown and Staholmog until you reach a T-junction with the R162. Turn right here and bypass the immediate left turn for the N52 taking the next left turn about 200m ahead. This is Castletown Court. Drive for approx. 600m and you will come across a narrow lane way on you left adjacent to a bungalow with a conservatory. Turn up the lane way and drive carefully to the top where there is room to park at the entrance gate. The gate is unlocked so out of courtesy close it again when leaving.
Posted by Castlehunter at 14:55