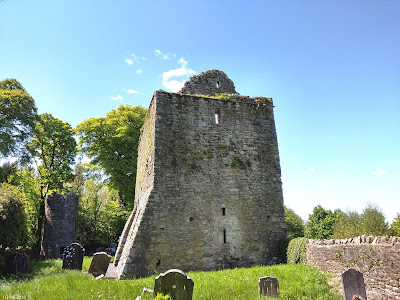 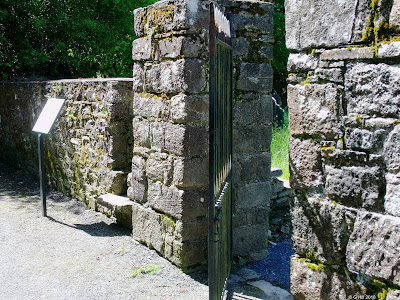 Above Image: The entrance gate & stile. 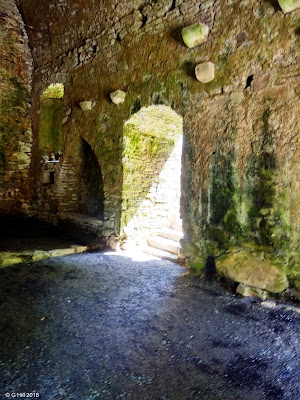 Above Image: Light streams into the chancel through
the South facing doorway 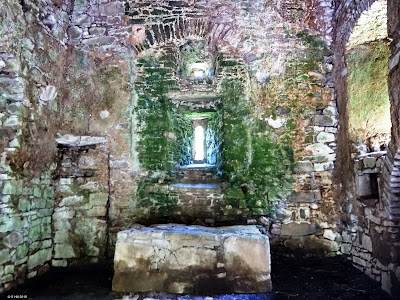 Above Image: The chancel 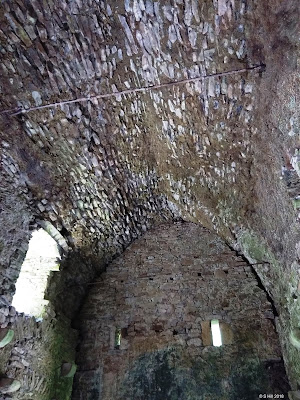 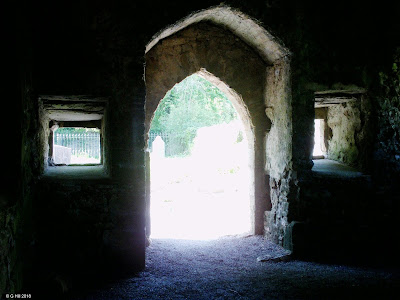 Above Image: The West doorway 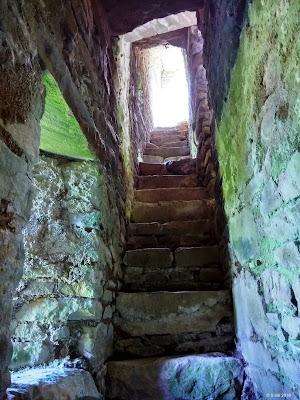 Above Image: Stairs to the upper floor 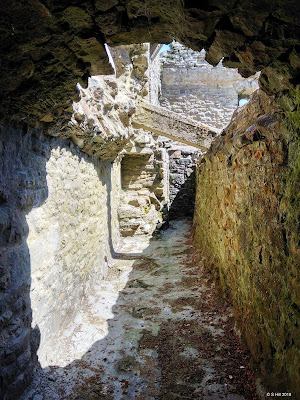 Above & Below image: The passageway 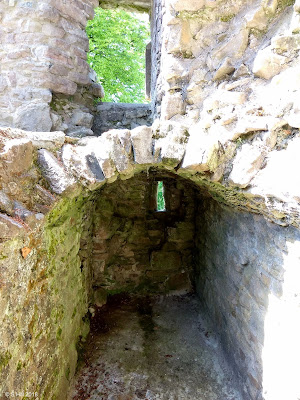 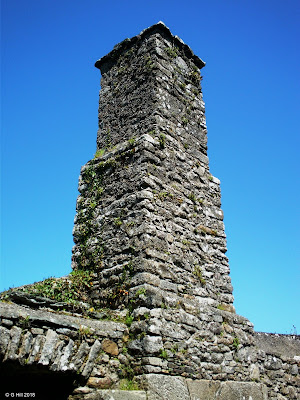 Above Image & 2 Below Images: The great chimney
& fireplace 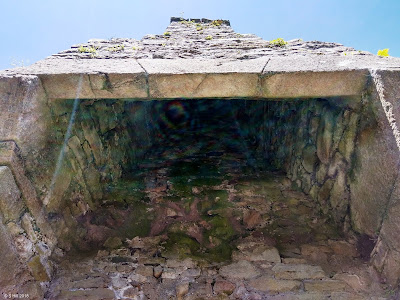 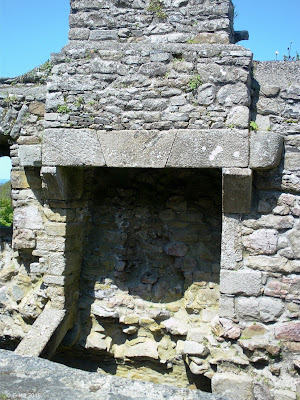 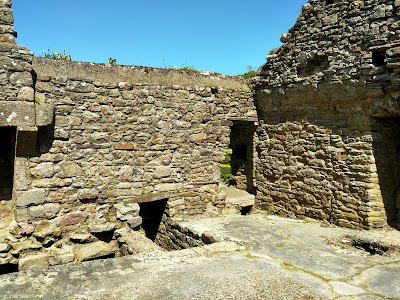 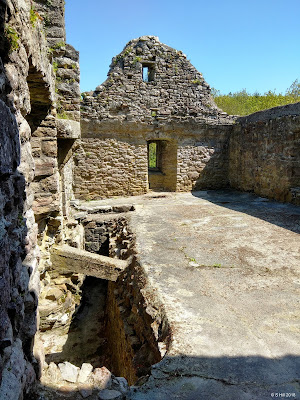 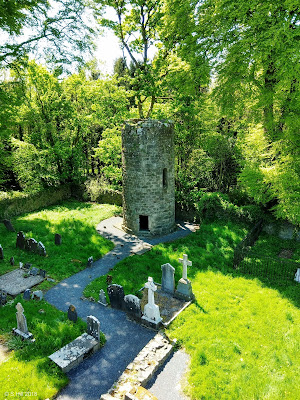 Above Image: The round tower viewed from the church upper floor 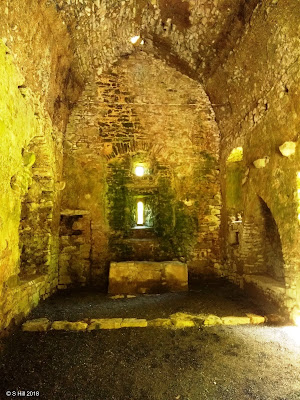 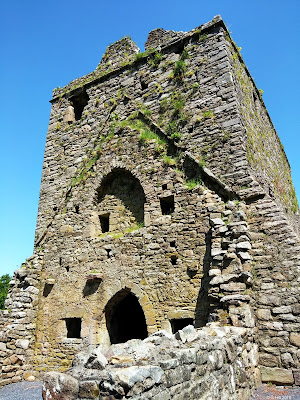 Above Image: Remains of the nave 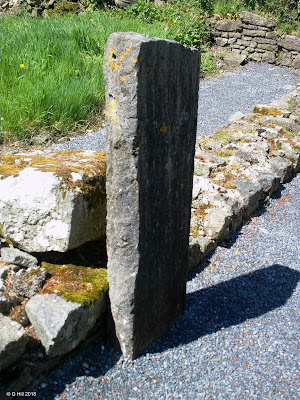 Above Image: Strange stone in the nave area 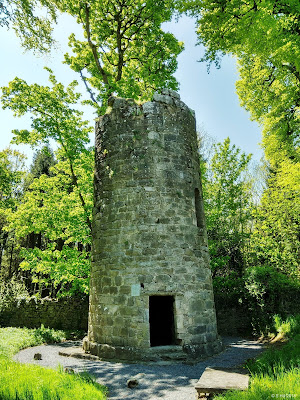 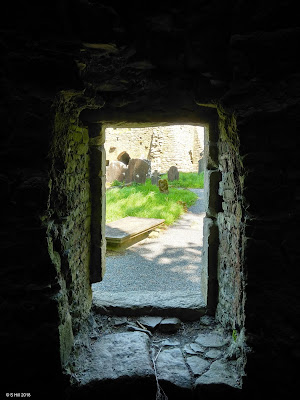 Above Image: View out from within the round tower 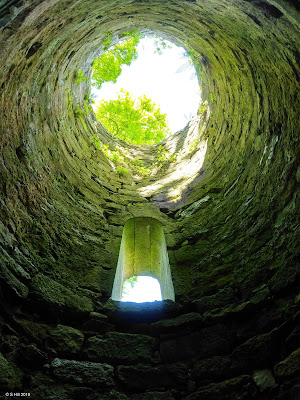 Above Image: View upwards within the round tower 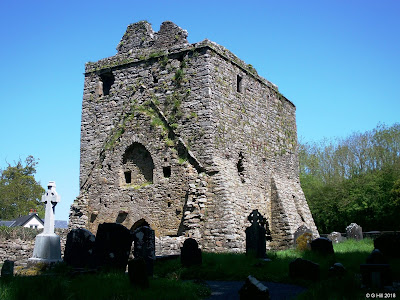 A couple of mysteries surround this site which lies tucked away in the Kilkenny countryside and which I can safely say was one of the most interesting places I've visited.
An early Christian monastery was founded here but by whom is unclear. The Church is dedicated to St Brendan of Birr so perhaps he may have been the originator. Little is known too of the origins of the round tower but it most certainly was part of the monastic site and could possibly date as far back as the 9th century. The original church was built here in the 12th century and consisted of the lower section of the present tower which was the chancel and also the nave which today all that remains are the foundations. You can still see the remnants of the roof by the triangular shape on the West facing wall. The residential section was added above a vaulted ceiling over the chancel in the 15th century.
I have to say I was very excited to find the open doorways in the South and West walls that led into the chancel and its amazing vaulted ceiling. There may be few cracks in it though as there were frequent droplets of water kissing the top of my head as I walked around. Another plus was the discovery of a steep stone stairs in the corner of the North wall. These led up to the floor above the vault which is now exposed to the elements. To the right at the top of the stairs is a passageway and then there area a couple more steps up into the once residential floor. This floor on a sunny day is a virtual suntrap the stone floor was hot to the touch. The area is dominated by a huge fireplace and a tall chimney giving an idea of how high the walls must have been. From a window in the West wall you can actually look down upon the adjacent round tower which in its time would have loomed over the church but is now diminished to less than 30 feet.The tower is unusual in the way that it sports two doorways, one at ground level and the other in a more usual fashion at approx 13 feet from the ground. The tower is also built unusually upon  a stone plinth. Access through the ground level doorway is now possible as at one time it had been blocked up. It's fascinating to stand inside and look upwards through the tower innards to the sky.
This one of my favourite sites and is well worth a trip to seek it out. We were lucky with the weather a warm sunny day but I would imagine that these ruins could take on a much more ominous aspect on a darker cloudier day. Go soon you won't be disappointed.
To find the ruins take the M9 exit 10 and join the R699 heading West towards Callan. After approx. 850m you will reach a fork in the road. Take the left hand road which is the R701. Continue for approx. 1.2KM until you see a turn right signposted for Carrick On Suir. Turn right here and then immediately left down a narrow road. (you can clearly see the ruins now). You can park at the entrance gate quite safely.