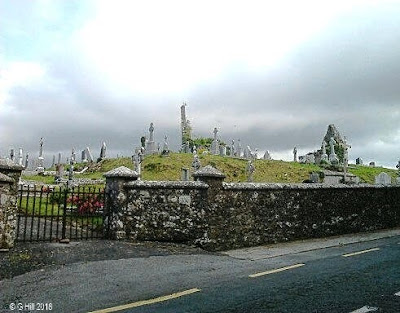 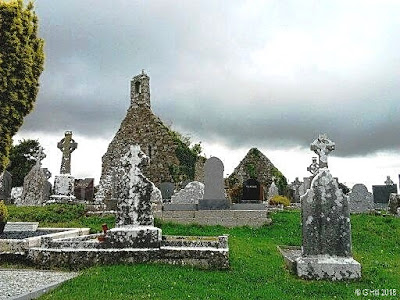 Above Image: The West gable and bell cote 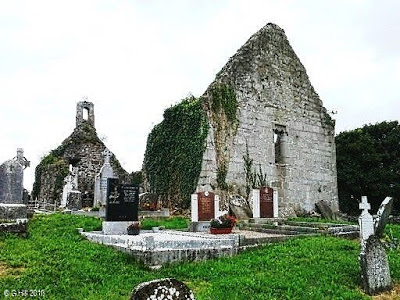 
I came across this church ruin on the road between Gort and Loughrea in Co Galway. It looked quite striking sitting atop the elevated ground within the graveyard and I wasn't going to pass it by without having a look.
There is little information available regarding the history of this church. It is most certainly medieval in origin and the place name "Kilchreest" translates to Christchurch which may have some link to the more famous Christchurch in Dublin. The townland that contains the church was part of the lands owned by the Persse family of Roxborough, their great house being the family seat for 245 years. Their is among their history as landlords the eviction of village tenants which would not have sat well over subsequent years and indeed Roxborough was burned in the civil war of 1922.
The church at Kilchreest is listed as being Roman Catholic and in ruins on the 1837 ordnance survey map. It is quite possible that this church could have been abandoned as far back as the dissolution in the mid 16th century.
As I say the ruins are quite striking when viewed from the road. Most of the North and South walls have disappeared leaving the church in two distinct sections. A single bell cote is evident on the extended West gable and there is a single window in the East gable which would have been the chancel. A further look around the graveyard revealed a few very interesting grave slabs.
To find the ruin take the R380 out of Gort towards Loughrea and drive for approx 20KM until you see the sign on your left that you are entering Kilchreest. The graveyard and ruin are approx 450m past this sign on the left hand side. You can park at the roadside wall.
Posted by Castlehunter at 15:57