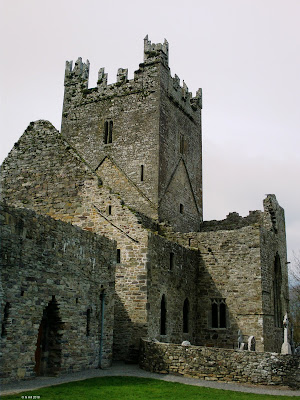 Above Image: The great tower of Jerpoint 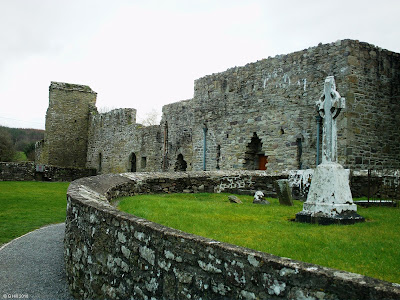 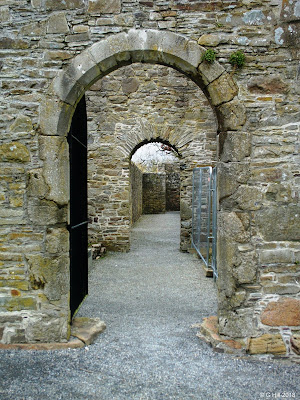 Above Image: East door leading to the cloister 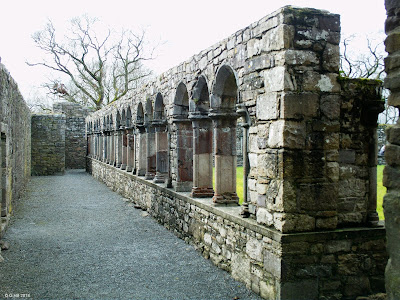 Above Image & Below 2 Images: The cloister 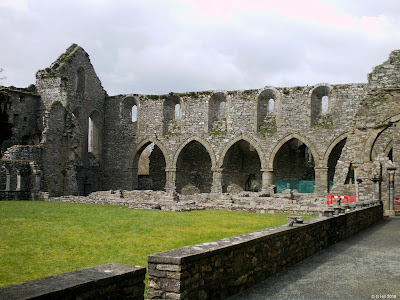 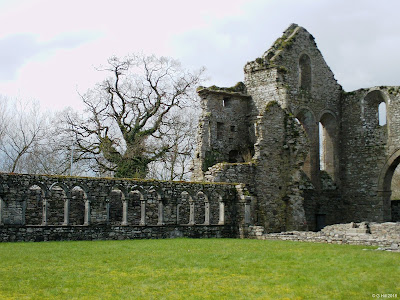 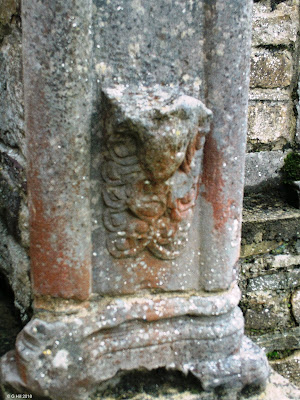 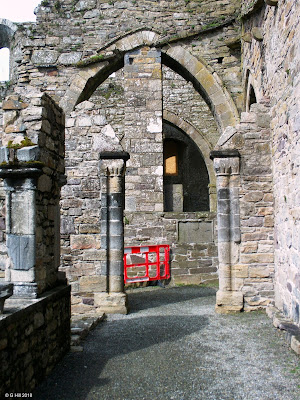 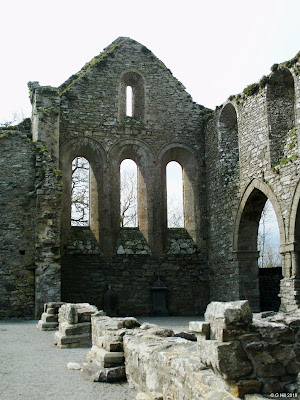 Above Image: West gable of the nave 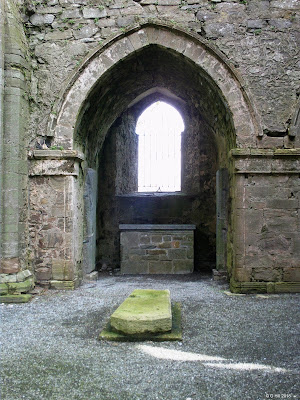 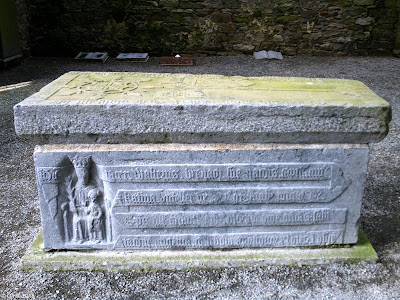 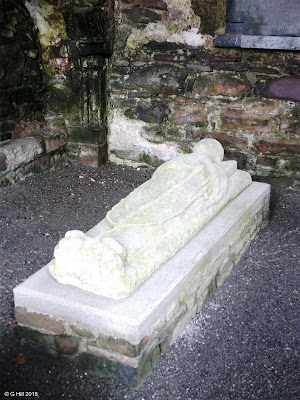 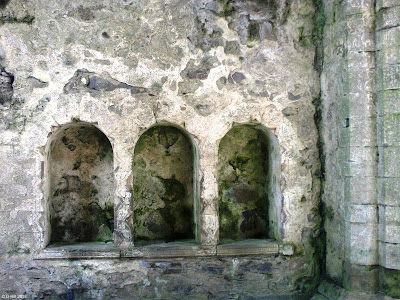 Above Image: A Sedilia 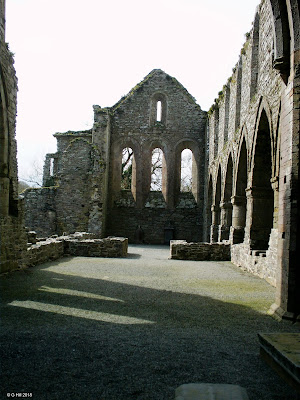 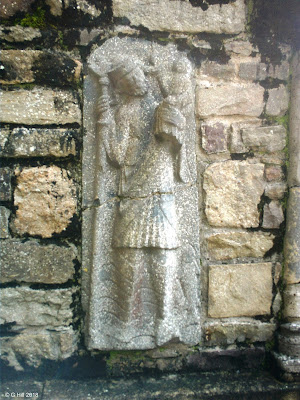 Above Image: Effigy of St Christopher 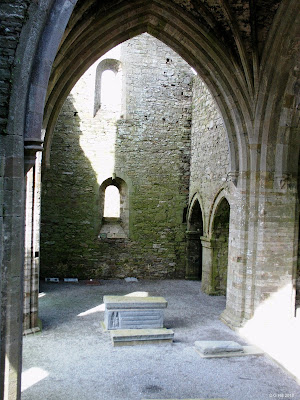 Above Image: The great arches below the tower 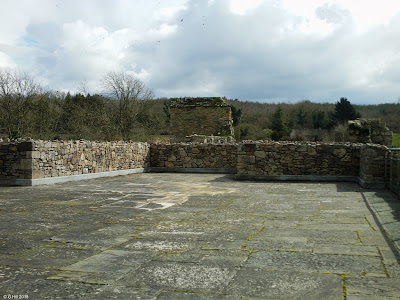 Above Image: Rooftop above the South Transept 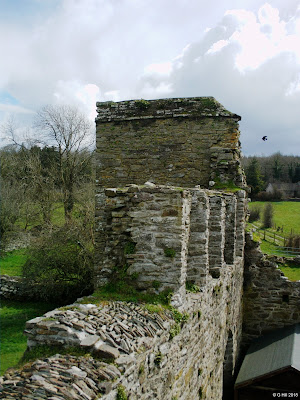 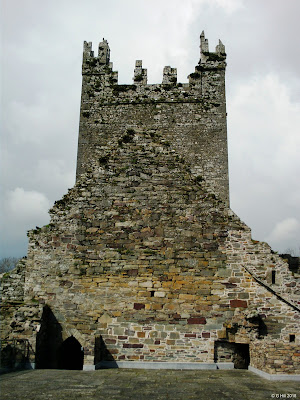 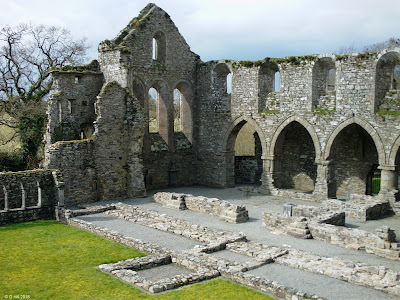 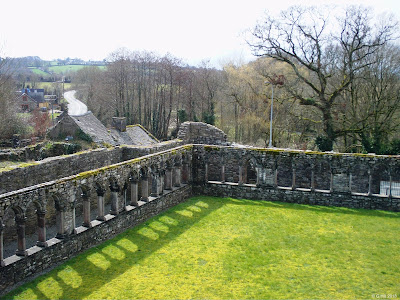 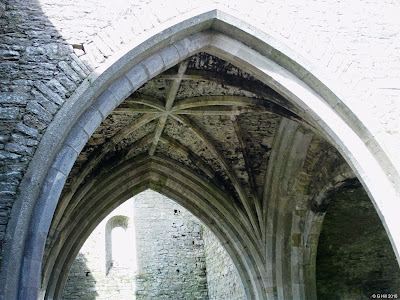 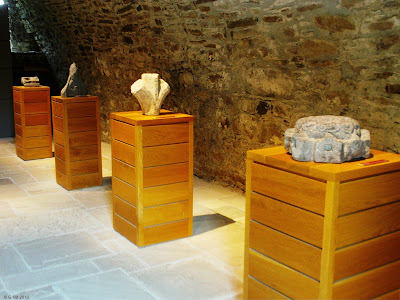 Above Image & Below 2 Images: Some of the artifacts to be seen 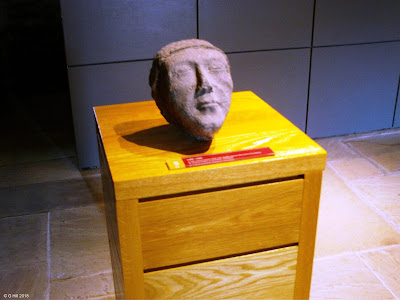 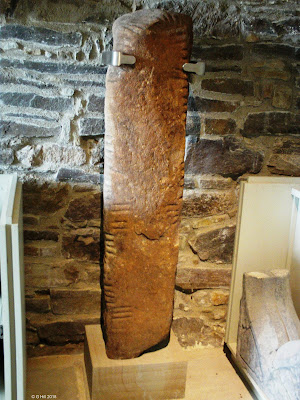 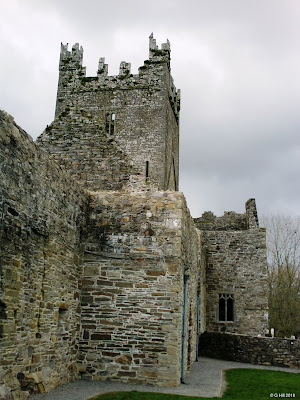 Jerpoint Abbey was founded c.1160AD probably by the Bishop of Ossory Donal MacGillapatrick.
The Cistercian order originally founded in France in 1098AD became its occupants in 1180AD.
By the time the great tower was added in the 15th century Jerpoint was thriving under its patrons the Butlers of Kilkenny. Although a victim of the dissolution in the mid 1500's the Butlers still maintained possession until the mid 1600's. In its heyday there was even a town at Jerpoint but later it would disappear leaving only a few foundations visible today. The abbey came into state care in 1880 and is managed today by the OPW who have strived to maintain the building from further decay.
When we visited the entrance in the North wall of the nave was inaccessible as works were in place but we had easy access through the East door leading to the impressive cloister.
The abbey is littered with interesting carvings, tombs and effigy's and it took us quite a while to take it all in. An exciting discovery was a stairs leading up onto the roof over the South transept which gives you a wonderful view of the nave and cloister below and indeed the surrounding countryside. Unfortunately another stairs giving access to the tower was at this time inaccessible.
In some of the rooms off the East of the cloister are many historical artefacts on display even a very impressive ogham stone.
The very austere practices of the early Cistercians or "White Monks" made it forbidden to construct a stone tower to the abbey. but this changed in the 15th century when the austerity waned and the Butler patronage was in place.The massive tower is supported by four huge piers and has very decorative vaulting.The top of the tower has a fortified appearance with its battlements designed in  the Irish fashion.
The cloister had a little reconstruction work done in 1953 and this area is a most interesting section. Filled with carvings of Knights, Bishops and odd looking creatures all to be found in various nooks and crannies..
All in all we spent some very worthwhile time there and although there is an entrance fee it is really nominal at around €4-€5 This of course helps with the maintenance of the site. Do yourself a favour and try to make a visit when you can.
To find the ruins of Jerpoint head South on the M9 and take the junction 9 exit. At the top of the exit ramp take the first left turn off the roundabout onto the R713. Continue for approx 5KM until you reach Stoneyford. Drive through the village and as you exit you will find a fork in the road. Take the left hand fork onto the L4206 and continue for approx 4.5KM until you reach a staggered crossroads with the R448. Turn left here and continue for approx 700m. You will see the abbey on your right. There is a car park for visitors 50m past the abbey.
Posted by Castlehunter at 17:10