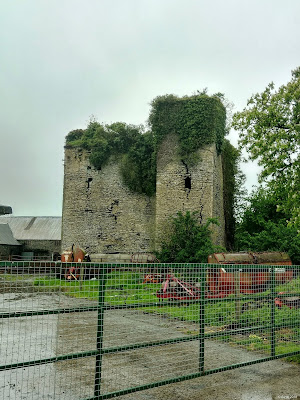 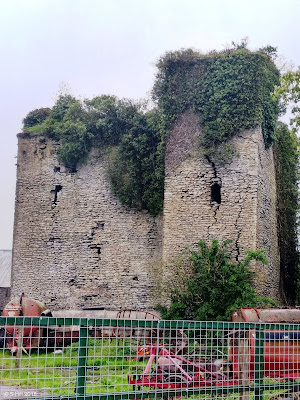 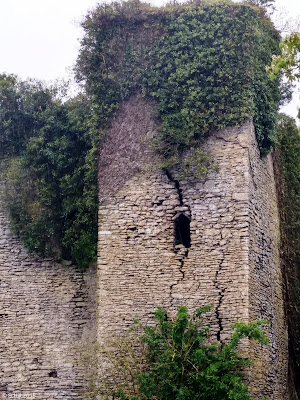 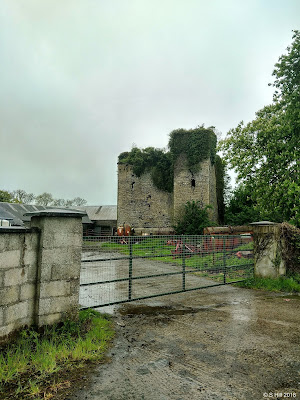 We came across this ruin just outside Portlaoise on the road to Mountmellick.
Clonreher Castle's construction date is unclear but it was originally owned by the O'Dowlings who lost possession of it first to Sir Ralph Bagnell and then in 1562 to John Dunkirley who owned lands in Maryborough (now Portlaoise). Clonreher was used as a defensive outpost for Tudor settlers against the O'Moores. The O'Moore lands were later called called Queen's county in honour of Mary Tudor. After the Cromwellian invasion the castle's defences were diminished and by the time Robert Hartpole gained possession in 1576 it was in a ruinous state.
The four storey tower which has a vaulted cellar is situated today in a farmyard surrounded by outbuildings and various pieces of farm equipment either in use or abandoned. It is really disappointing to see an historical castle in such a bad state. It is slowly decaying evident by some nasty fissures in the wall of the corner tower. When we eventually moved on to our next destination it was with a tinge of sadness.
To find the ruin take the N80 North out of Portlaoise. You will go straight through two small roundabouts and then a third larger one. Once through the large roundabout continue on the N80 towards Mountmellick for approx 350m then take the first left hand turn. You will find the ruin approx 700m down this road on your left. You can pull in at the farm gate.
Posted by Castlehunter at 17:22