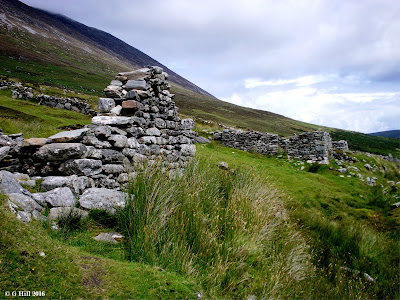 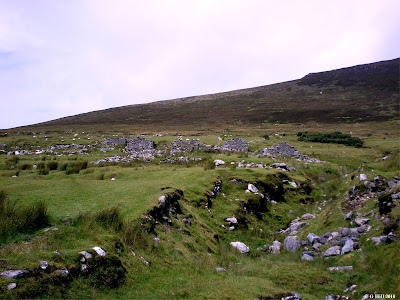 Above Image: The lower Southern slope of Slievemore mountain 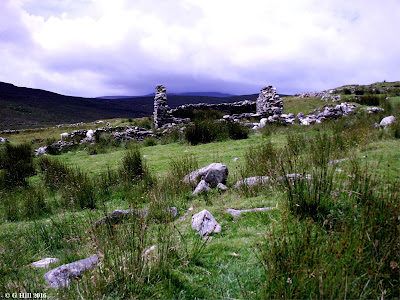 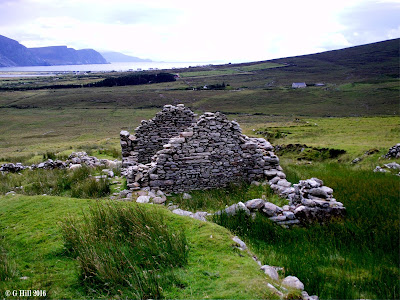 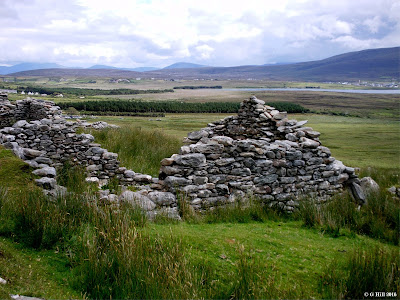 Above Image: What appears to be the Nephin Beg mountains in the distance 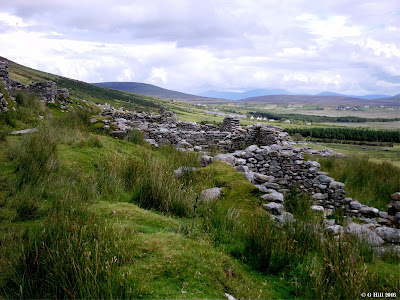 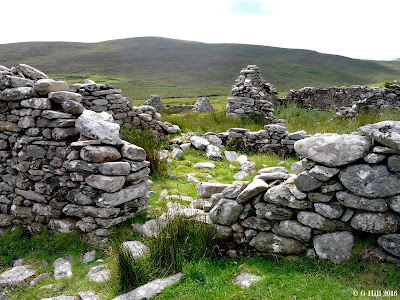 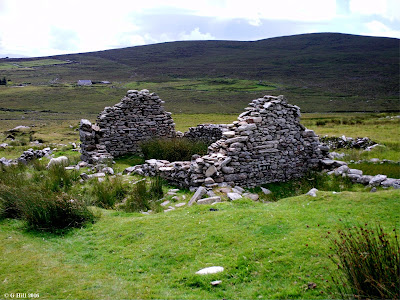 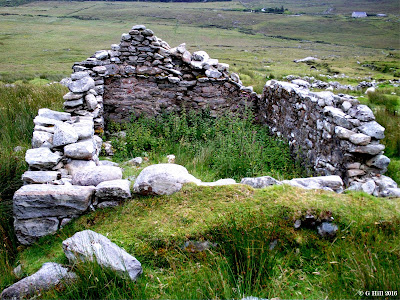 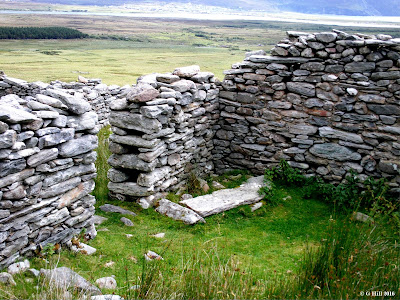 Above & Below Images: Single door entrances 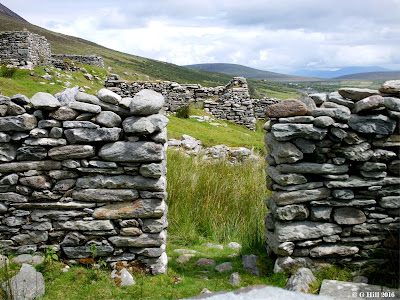 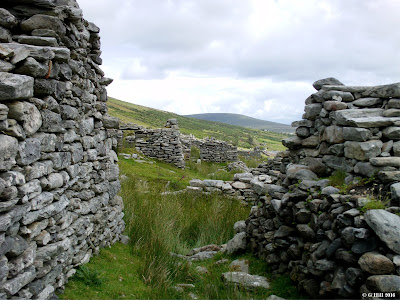 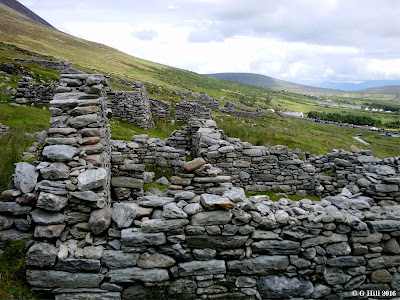 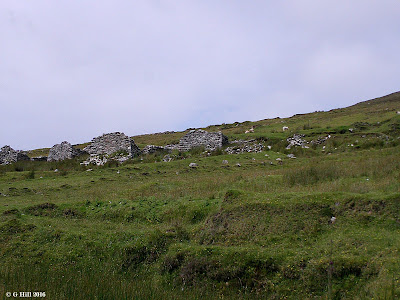 On The Northern end of Achill Island a little North of Keel and South East of Dugort lie the remains of Slievemore Village an almost mile long series of ruined cottages scattered along the lower Southern slope of Slievemore mountain. Consisting of a main village and two ancillary villages in close proximity they are a poignant example of Ireland’s past.

Archaeologists believe there was a settlement here at least as far back as Anglo-Norman times. The cottages themselves were more than likely from a later date and families occupying them were certain to have been living under the control of a local landlord. Times were hard and many would face eviction if they did not pay the rent. When the great famine arrived in 1847 the residents were devastated by it and some moved out to Dugort to be near the sea so they could attempt to live on catching fish. Many others emigrated at the time and also in successive years thus leaving the village eventually abandoned. Eerily deserted the village remained that way and began to fall into ruin. Interestingly enough up to the 1940’s a practice called booleying was in effect. This would take place during the summer months when cattle were grazed on the mountainside and people from nearby villages would use the remains of the cottages as temporary domiciles while they tended the herd. In most cases young people would be involved in this. Eventually even this practice died out and now the village is now truly deserted except of course for the thousands that visit it every year.
We paid a visit during the Summer and on Slievemore because of its exposed slope it can get quite warm. There was fair amount of people about but there are so many ruins to wander around that you frequently found yourself alone. While we were there a rescue helicopter was scouring the mountain for a man who had gone missing while hillwalking. They thankfully found him in the end incapacitated on a high part of the mountain. We kept to the safer lower level and walked up the track heading West from the car park and worked our way back down exploring the cottages one by one. The ground is uneven in places but easy enough to navigate. There are upwards of 100 cottage ruins here, most were one room structures built in the same fashion as the field boundary walls that are prevalent here in the West of Ireland, constructed not with mortar but by stacking and slotting the large stones into place. They vary in size some with substantial remains others at near foundation level. They are all almost parallel to each other in a North-South direction with the scant remains of a very old pathway in between. Looking at these humble abodes I can only imagine that life must have been very hard in those times with potatoes being the main staple diet and when famine swept the land these poor souls would have been hit the hardest. I found it a very sobering experience and certainly made me grateful to be returning to the comfort of our Hotel.
These are really a very interesting set of ruins, it’s not often you find an entire village in this state of affairs so if you find yourself in the vicinity of Achill it is well worth a diversion to view Slievemore. Achill which is the largest of the Islands off the coast of Ireland is so close to the mainland that a simple short road bridge at Achill sound is all you have to navigate

To find the ruins take the N59 heading West out of Mulranny (or Mullaranny as it is also known) and just as you leave the village there is a left turn onto the R319. Take this turn and follow the road until you reach Achill Sound (approx. 15KM). Cross the bridge at Achill Sound and continue on the R319 for approx. 14KM until you reach the village of Keel. Just after the prominent Minaun View Bar take a turn Right and follow the narrow road for approx. 2KM until you cross a narrow stone bridge. Just after the bridge the road forks left and right. Follow the narrow left hand lane right to the top which leads you to a graveyard and a car park. You will see the ruins of the village on the left. Please note on this last narrow stretch after the bridge if you spot a tour bus heading in the other direction from the ruins stay where you are until it passes as you will never get by it on the lane itself.