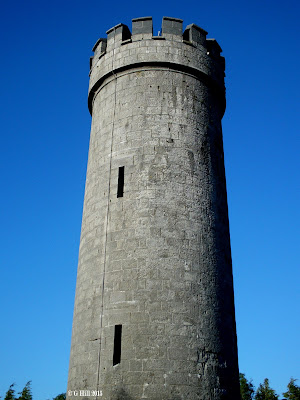 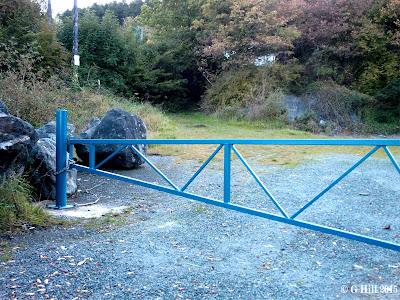 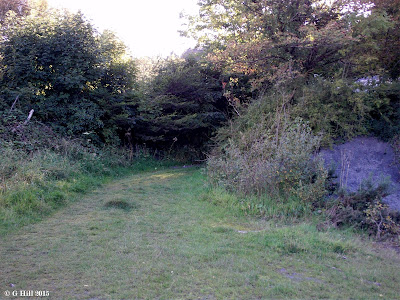 Above Image: Starting point of the trail 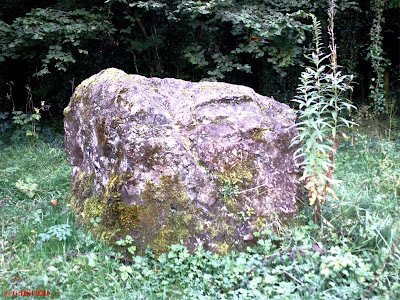 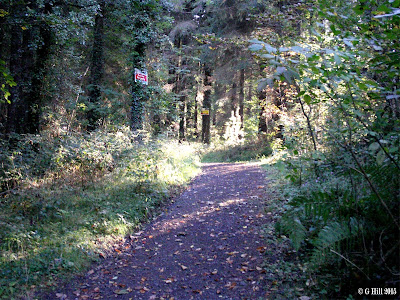 Above Image: Trail upward with one of the warning signs 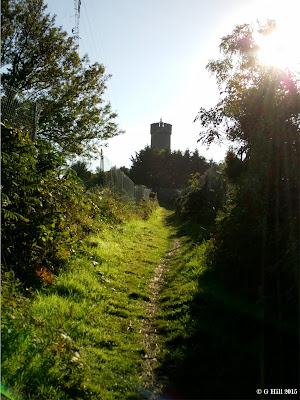 Above Image: The tower comes into view 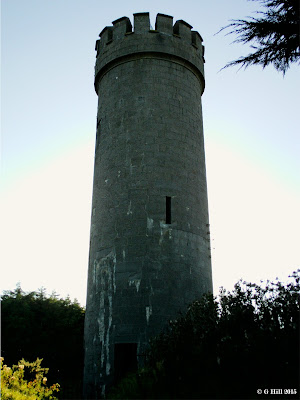 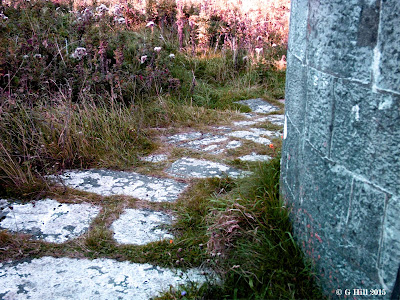 Above Image: Base flagstones 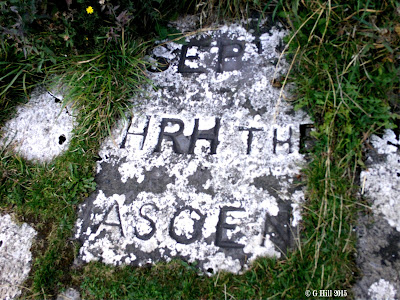 Above & Below Images: Overgrown flagstones with details of
Royal visit 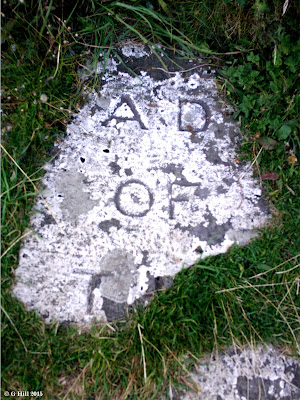 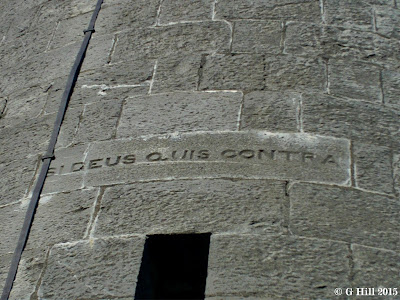 Above & Below Images: Two of the exterior inscriptions 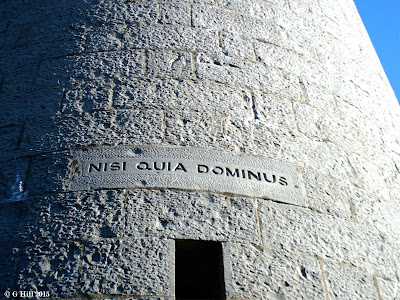 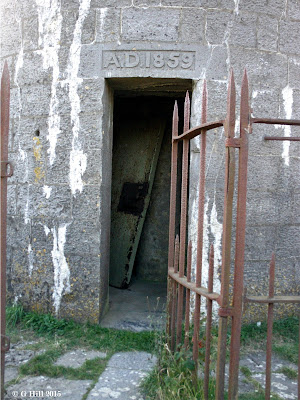 Above Image: Entrance door to tower 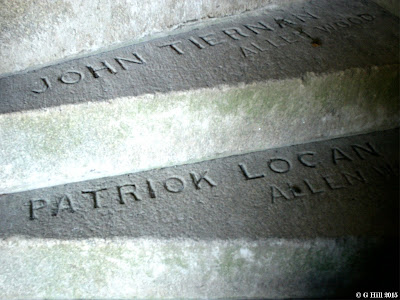 Above & Below Images: Two of the inscribed steps 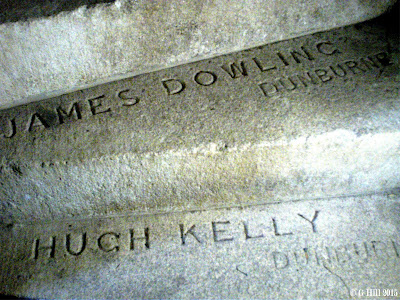 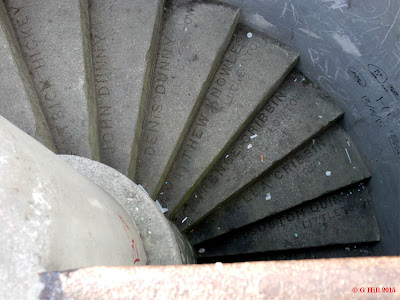 Above Image: The stairs viewed from the conservatory 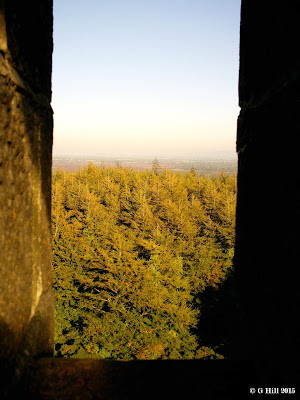 Above Image: First view through the window 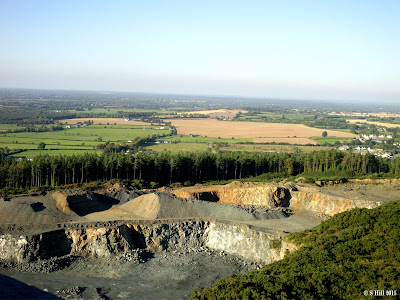 Above Image And Below 3 Images: Views from the tower of the
excavated hill 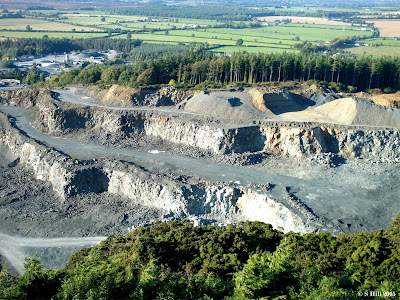 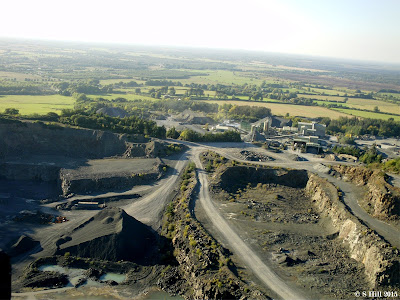 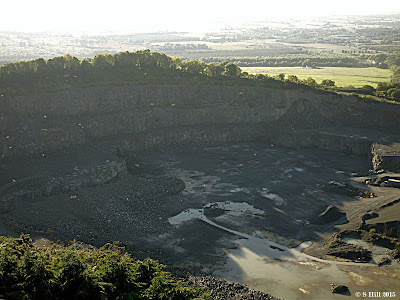 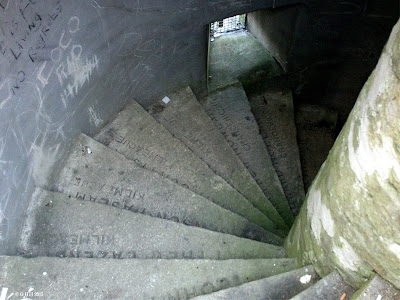 Above Image: The descent 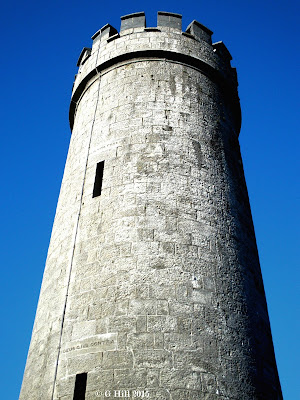 This interesting tower sits atop the Hill of Allen and is commonly referred to as Aylmer’s Folly. It was a project of Sir Gerald George Aylmer a Baronet of Donadea Castle. Construction began in 1859 with the chief masons William and Lawrence Gorry at the helm and took four years to fully complete as building only took place during the summertime. The Hill of Allen on which it stands is according to legend where Fionn MacCumhaill had built a camp and his men trained on the wide flat plains below. The Hill of Allen is also the highest point in Co Kildare and the tower stands at a height of 60 feet above this and is 9 feet wide at its base.

I was really interested in ascending the hill and climbing the tower but was getting many conflicting reports regarding access. Up to a few years ago there was a Kildare Co. Council car park at the base of the hill and a trail led up to the tower. Apparently in an unusual move the Council controversially sold the rights to quarry the hill for the next 50 years to Roadstone and so up to now almost half of the hill has been quarried away leaving the tower which sat on the crest of the hill now sitting basically near the edge of a cliff. A locked barrier now blocks access to the car park but a local man told me that there was still a public right of way to the tower and that you could still park a car at the gate and walk up. So off we went.
Arriving at the roadside gate I managed to tuck the car in against it. There is a large gap on the right between the gate and the hedgerows which gives easy access on foot. The trail to the summit begins on the back left hand side of the car park and leads up to a large field gate with a sign “private property”. This was to be the first of many warning signs along the way. But yet there were many signs simply saying stick to the trail for your safety. Obviously Roadstone were not inhibiting the walker. To the left of this field gate the trail turns left you will notice a large boulder on the right which was used as an altar stone in times past for celebrating the mass during the infamous penal times in Ireland. To reach the tower just follow the trail upward along a reasonably easy gradient keeping on the straight and narrow, the ascent shouldn't take more than 12-15 minutes. Eventually the tower comes into sight.
After the trek I was delighted to find that the doorway was open on the tower. A large detached steel door lay inside against the wall. The tower has several inscriptions in Latin on various points around its height on the outside and a flagstone partially covered at the base a little around left of the door commemorates the visit in 1861 of HRH Edward,the Prince of Wales. He apparently ascended the tower on September 16 of that year. It is not indicated how much of it was actually built at that point.
Folly or not this is a really unique tower. The date of construction 1859 is engraved clearly above the doorway. Each of the steps on the spiral stairs inside has an individual name from those involved in the construction. The stairs leads to a domed top where the original glass has been replaced by a new PVC styled conservatory. I was disappointed because it was difficult to see anything out through the glass but I then discovered a window that could be opened. The gap between the glass and the castellations outside is quite narrow and a lot of carefulness is needed but I managed to climb outside and stand up to see above the castellations and what a view is to be had. The plains of Kildare stretch out before you. One scary view is of the whole half of the hill excavated below leaving the tower virtually on a precipice. I don’t know what future lies for this tower or if Roadstone intend to continue quarrying past it but hopefully this interesting historical site will not entirely disappear.