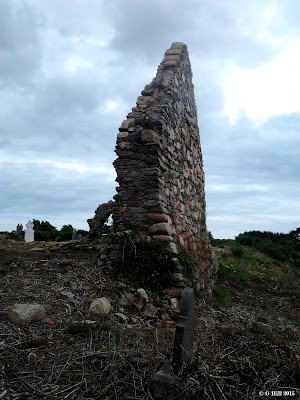 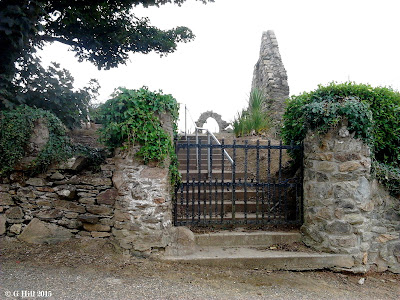 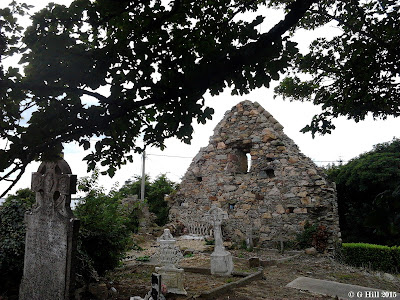 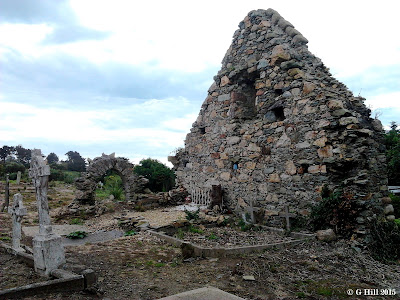 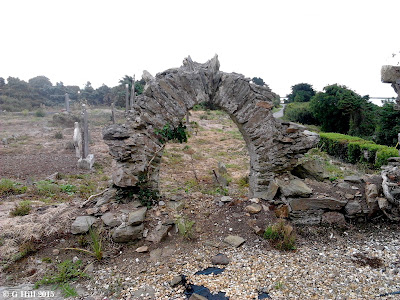 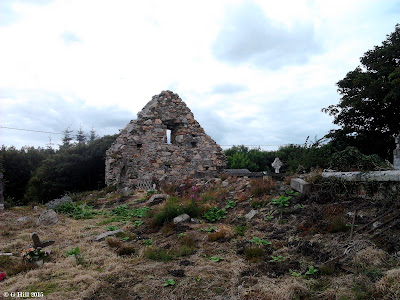 This small ruin is all that remains of the parish church of St Iberius. The Bishop Iberius was also known as Ibar or Ivor and was a 5th century patron of Beggerin Island. This one time parish church in the Wexford countryside was named after him.

The construction date is unclear but is likely to be medieval and is recorded as being in ruins by 1840. What remains today are the single windowed West gable and partial remains of the North and South walls. The South wall has a rounded doorway which is partially sunken as the ground in the enclosure is higher than when construction took place. Apparently this was a sizeable enough Church in its day with a nave, chancel and a round chancel arch.
The ruins sit on elevated ground by the roadside with access by way of a stile or gate. The scant ruins have a dramatic look when viewed from the road below which is what set me about visiting them but sadly they leave a bit to be desired up close. Nonetheless there is at least something to see here unlike some of the very scant ruins I’ve visited such as Old Ballybought Church in Co Kildare (see previous post here) The graveyard has a series of cut stone grave markers some dating back to the late 18th century and a large monument from 1851 dedicated to a local surgeon named Thomas Edward Lindsey who was from the nearby townland of Broadway. The graveyard doesn't appear to have a regular upkeep and the ground inside is uneven and overgrown in places so a little care is needed. Still it’s worth a quick stop if you happen to be in the area.
To find the ruin head from Wexford to Rosslare on the N25 and when you reach Tagoat you will pass by Cushen’s bar and the large St Mary’s Church on your left. Take the next right turn signposted for Carne Beach, Lady’s island & Broadway. Drive for approx 2.5KM and you will reach Butler’s pub on your left. The ruins are adjacent to the pub. You can park in the pub car park and drop in if you like for a refreshment afterwards!