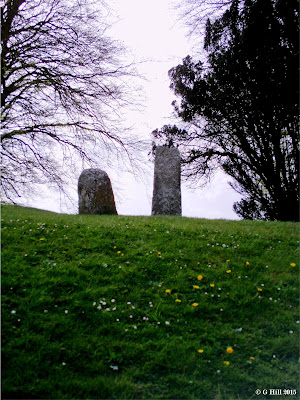 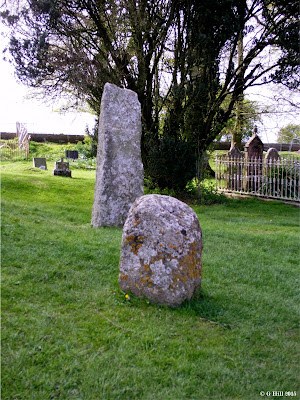 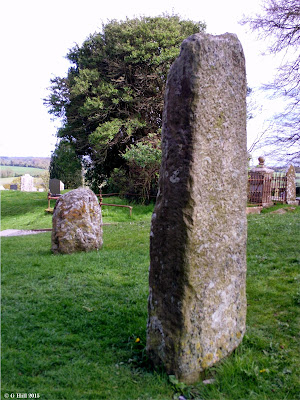 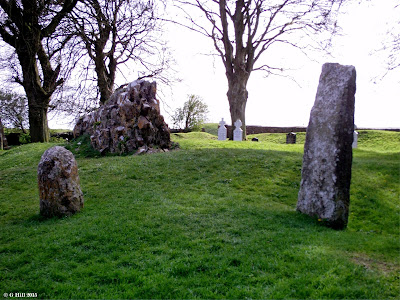 Above Image: The Stones with Church ruin in backround 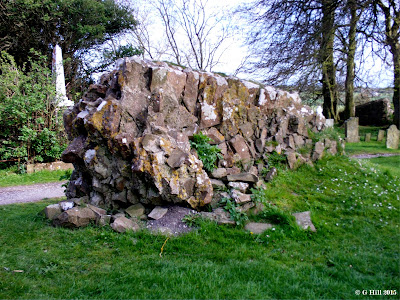 Above & Below Images: The remains of the Medieval Church 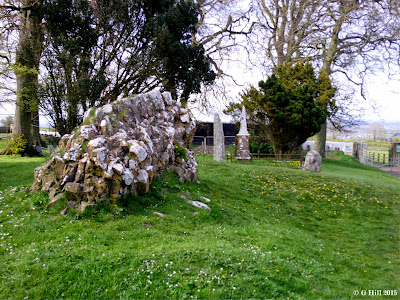 On the fringes of the historic Hill of Tara beside a Church dedicated to St Patrick which now serves as a visitor centre are two standing stones in close proximity to each other. These would have been part of a larger quantity of standing stones that in ancient times that were littered around Tara. They most likely date to the Bronze Age (300BC-2500BC). Stones such as these are fascinating to me as they are a tangible and mysterious link to the ancient past and so when I found myself in the area I decided they were worth going to have a look at.
The stones stand on a grassy mound a few yards apart adjacent to the Church and hard to miss as you enter the site. The larger of the two has a faded engraving of what is thought to be the pagan god of fertility Cernunnos. This raises the possibility of them being involved in pagan rituals although equally it could also be the case that they were markers of some sort or a representation of male and female.
Adjacent to the stones are the partial remains of the medieval Church of Tara. Reportedly constructed in the 12th century it was linked to the Knights Hospitallers and was a parish Church until it fell into ruin in the 16th century. Apparently what was left was mostly demolished in 1822 and some of the stone used in the construction of the present Church.  The scant remains of the old Church along with the standing stones form a kind of greeting party to visitors heading for the historic hill and its further antiquities.

To find the Stones take the M3 heading North and at the Junction 7 exit and take the left hand turn at the top of the exit ramp onto the R147. Continue on this road until you reach the second right hand turn approx.1 KM on. This turn is signposted for Tourist Information. Turn onto this road and drive until you come to a T- Junction.  The car park for Tara is a few yards to your left or alternatively you can park opposite if space available. The entrance for the Churchyard is a few yards to the right of the road you just came from. A short walk up a gravel path will bring you to the stones.