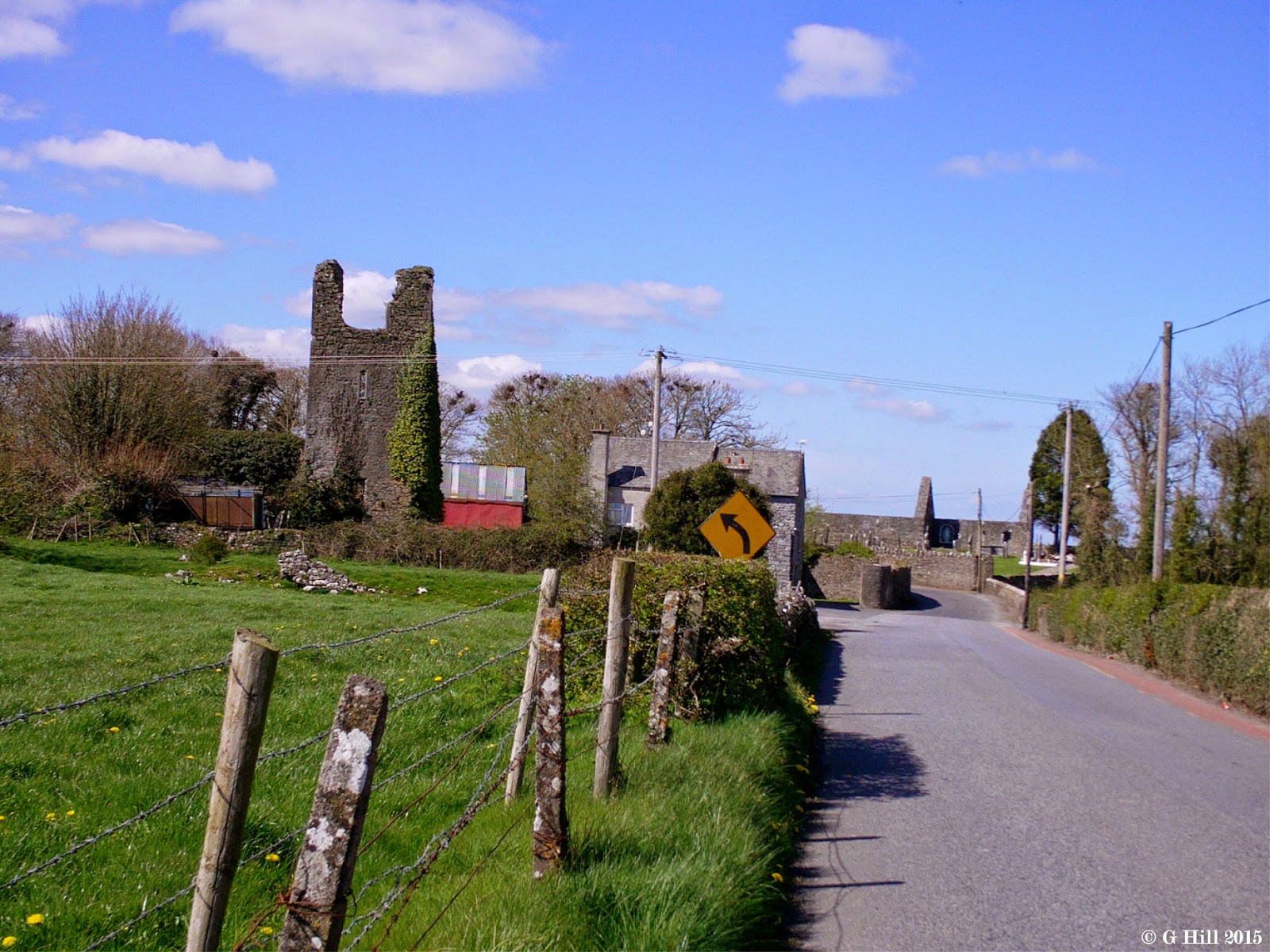 Above Image: Approach to the Castle (Church on right) 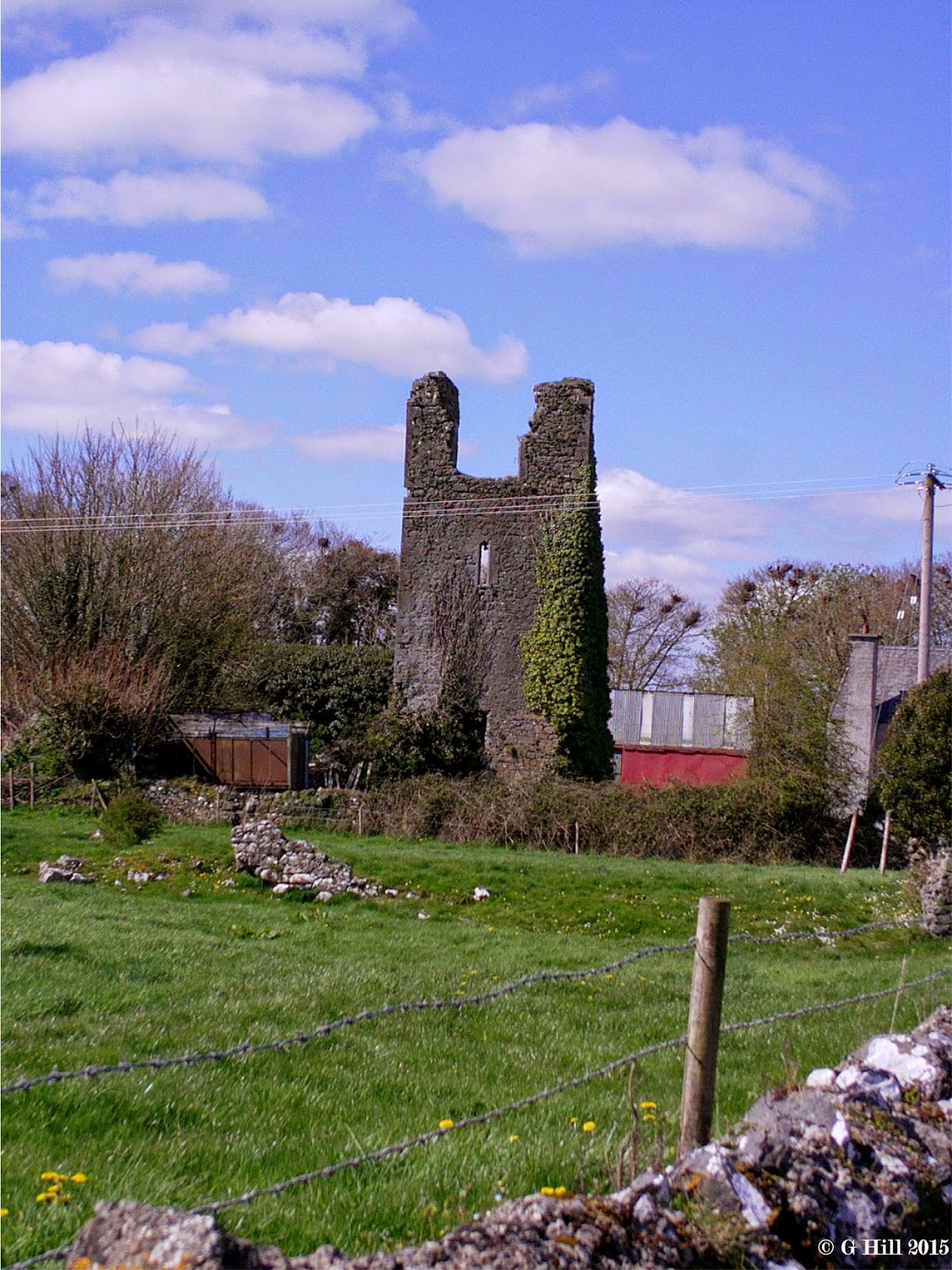 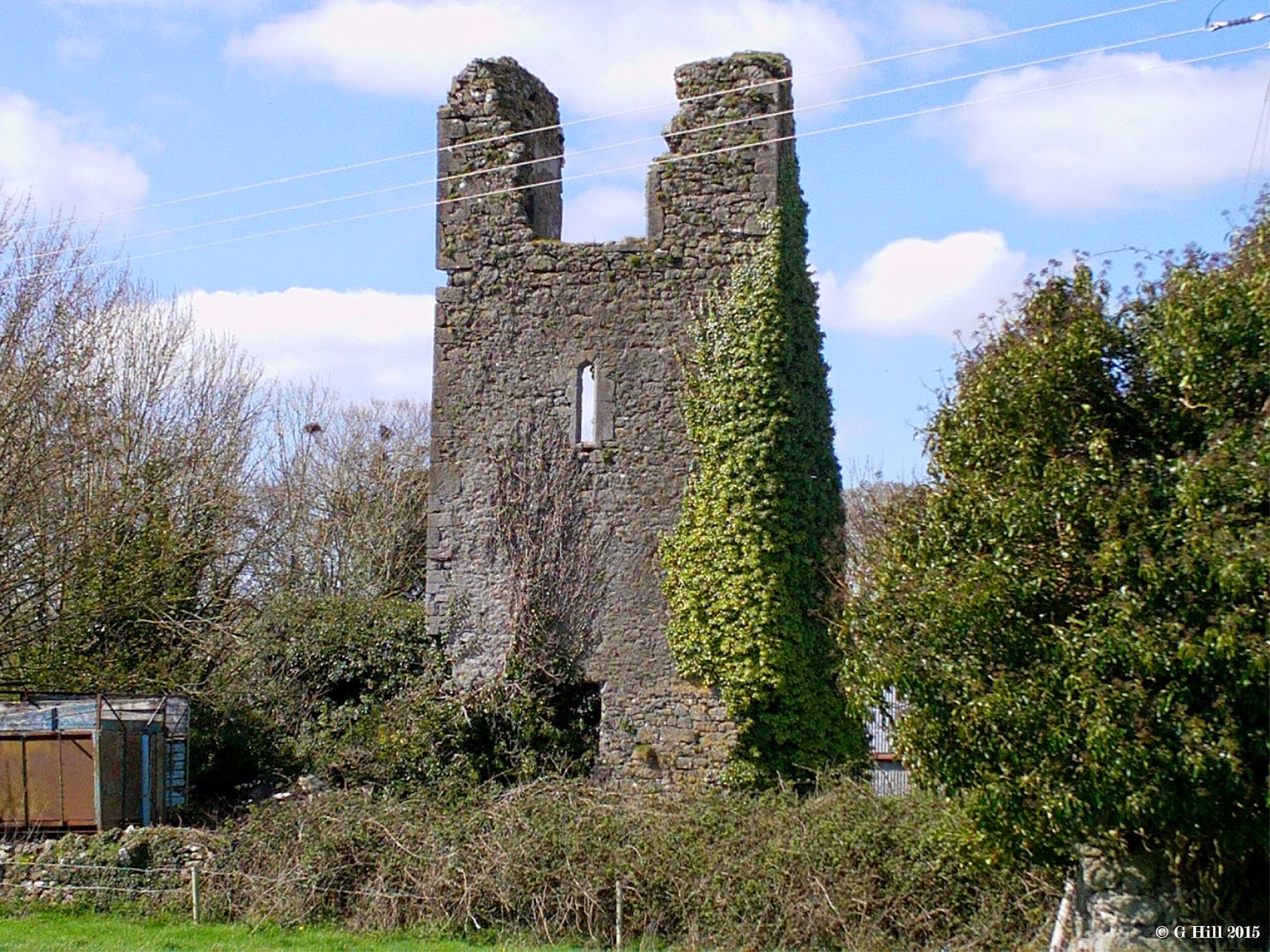 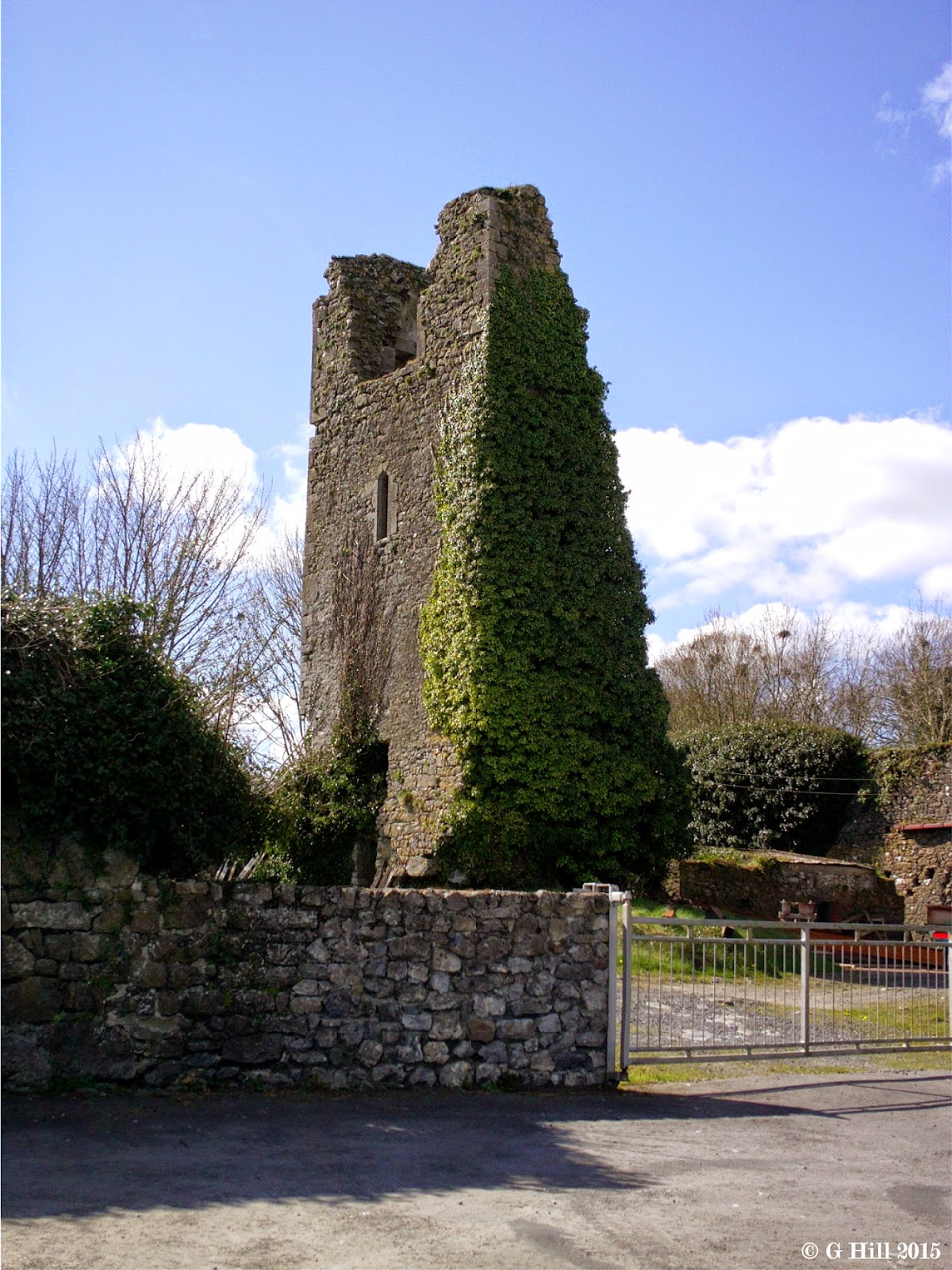 Above Image: The partial East wall 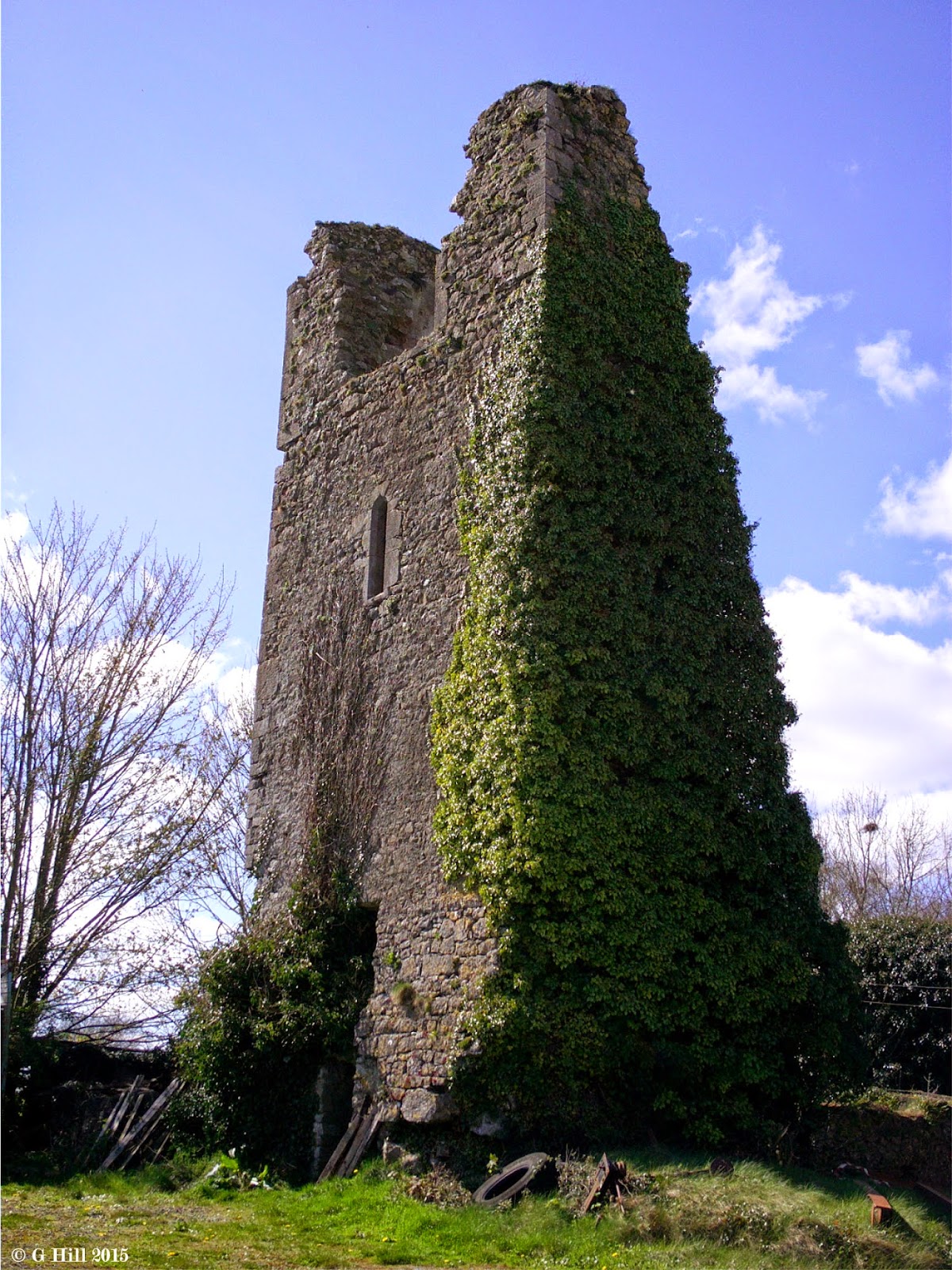 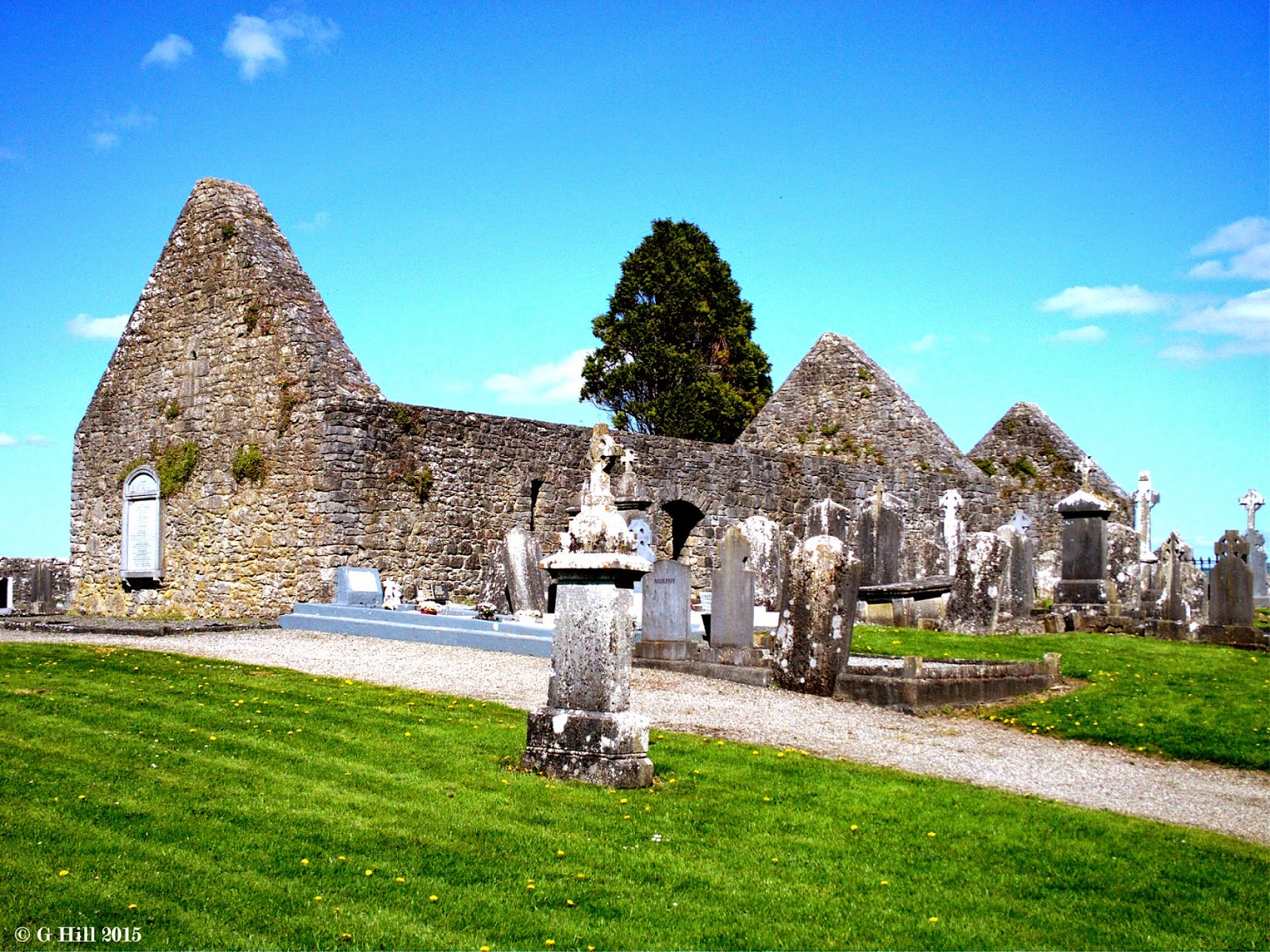 Above Image: The medieval Church 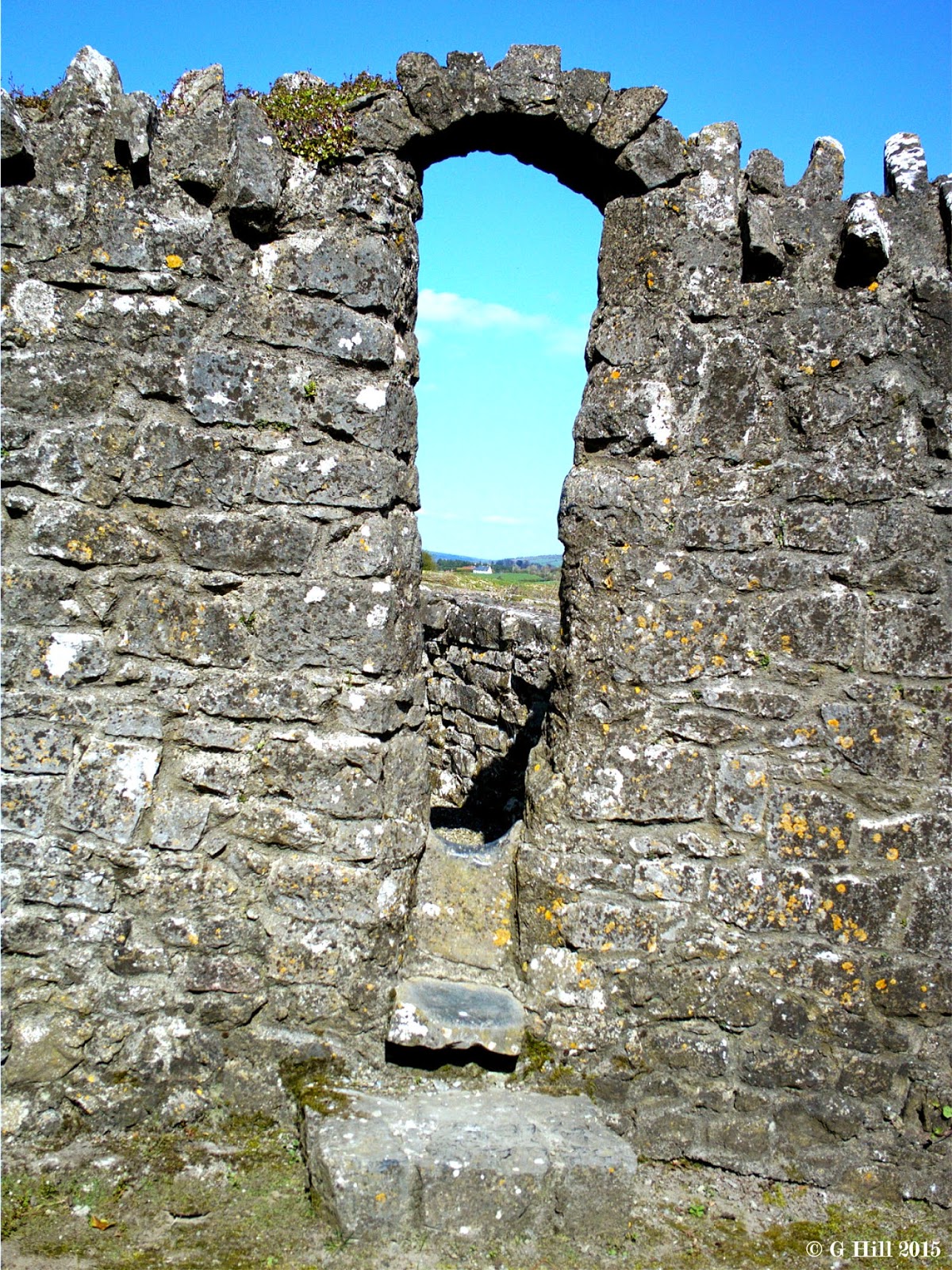 Above Image: Entrance stile to graveyard 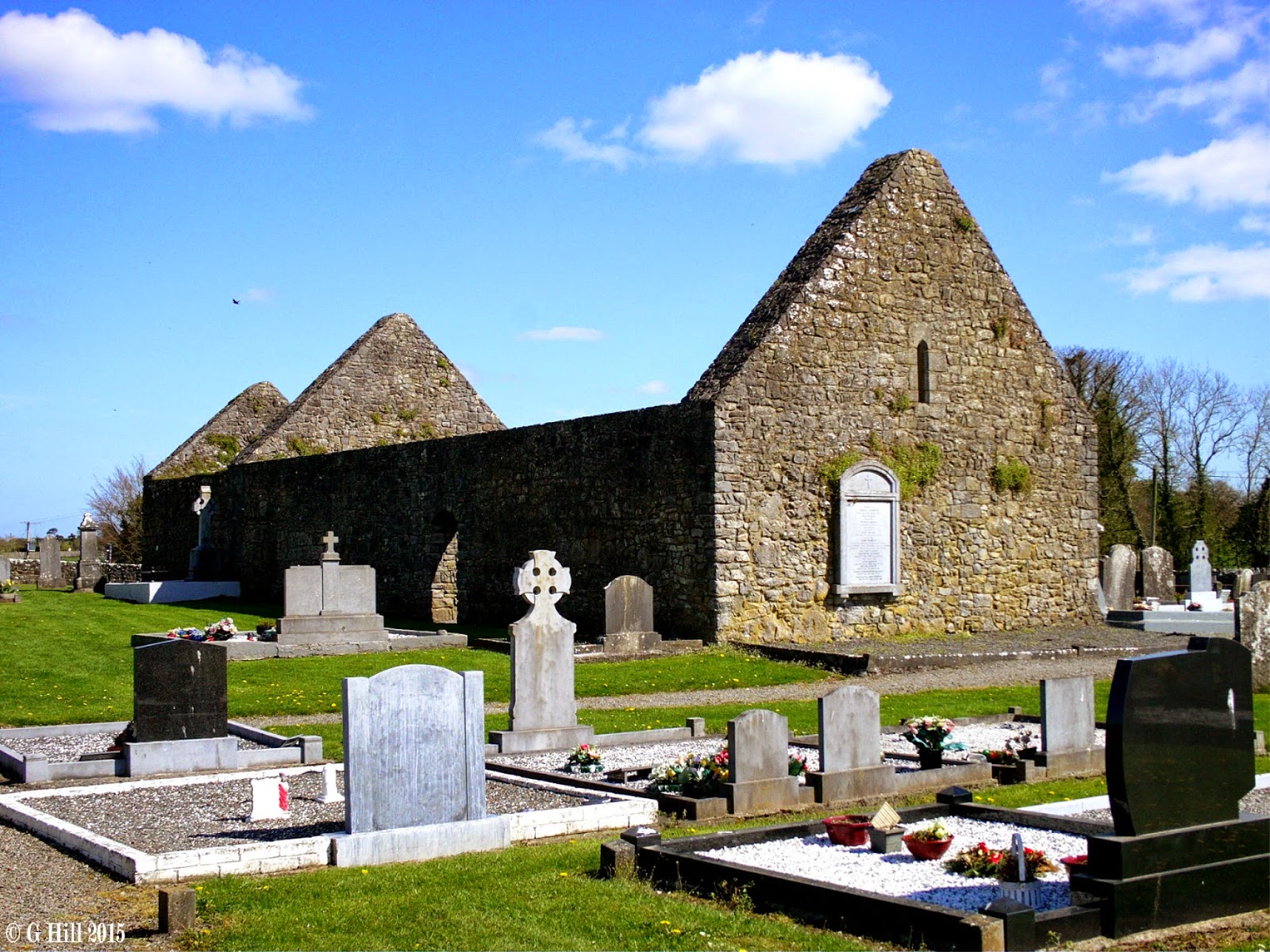 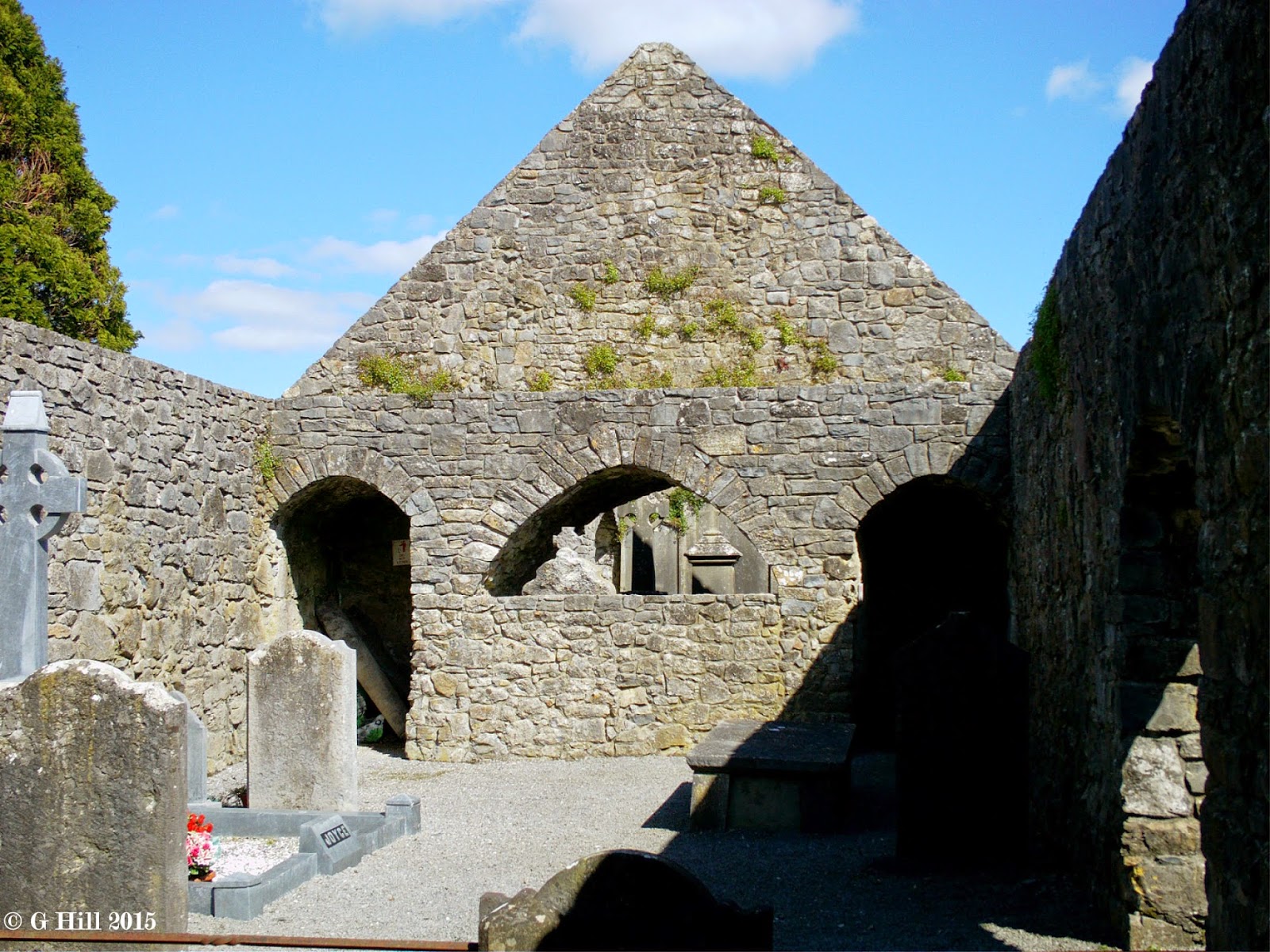 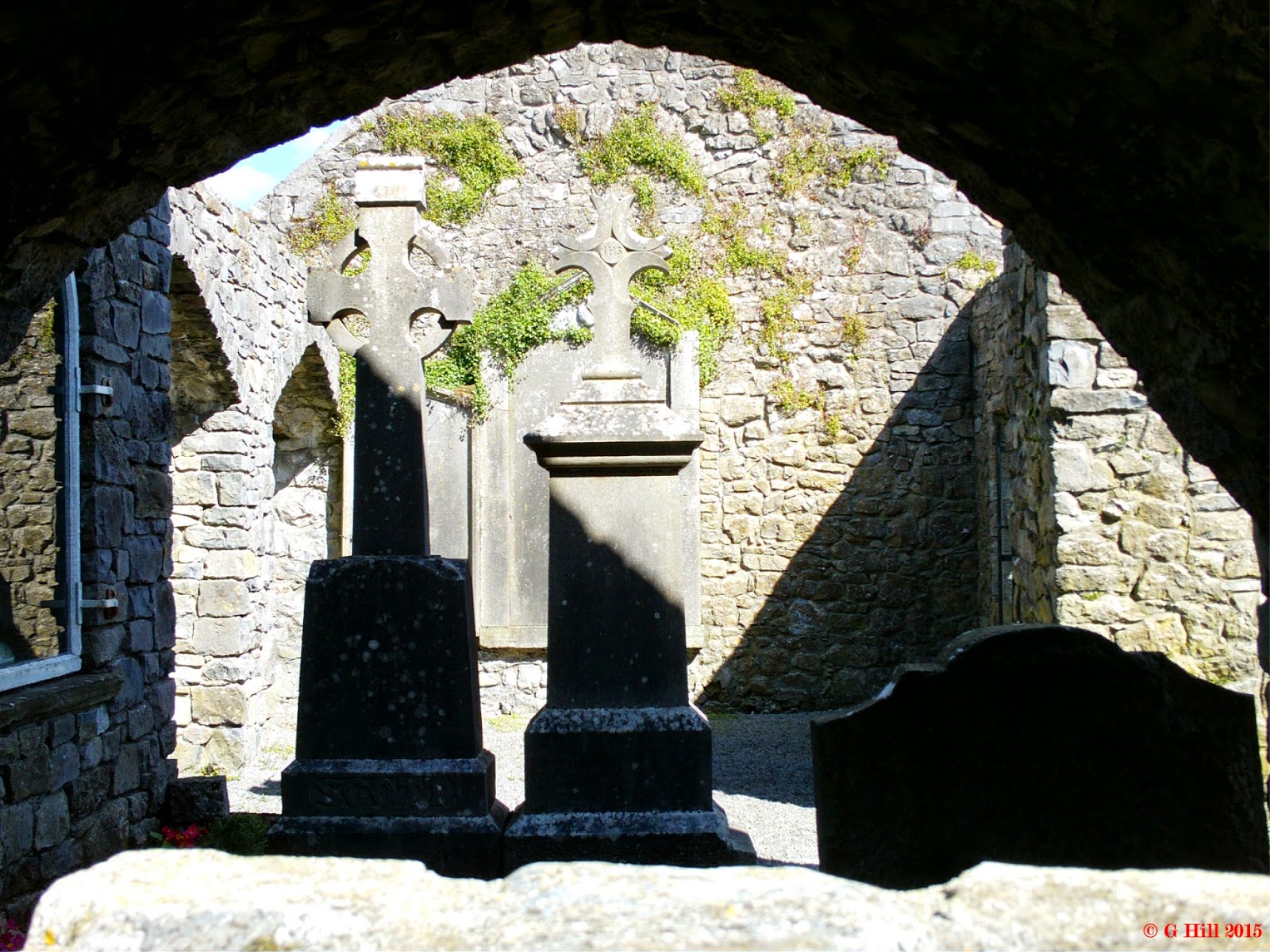 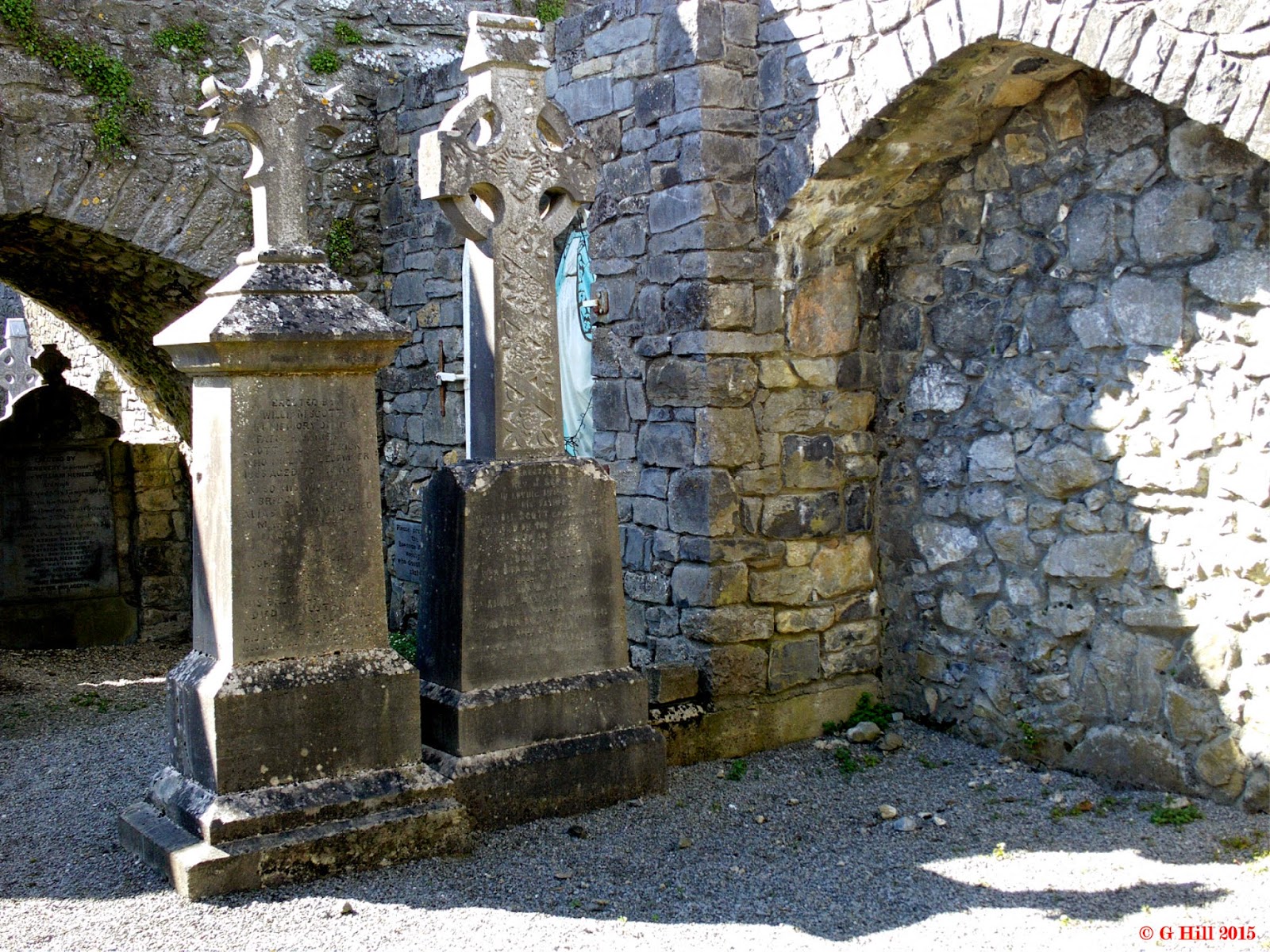 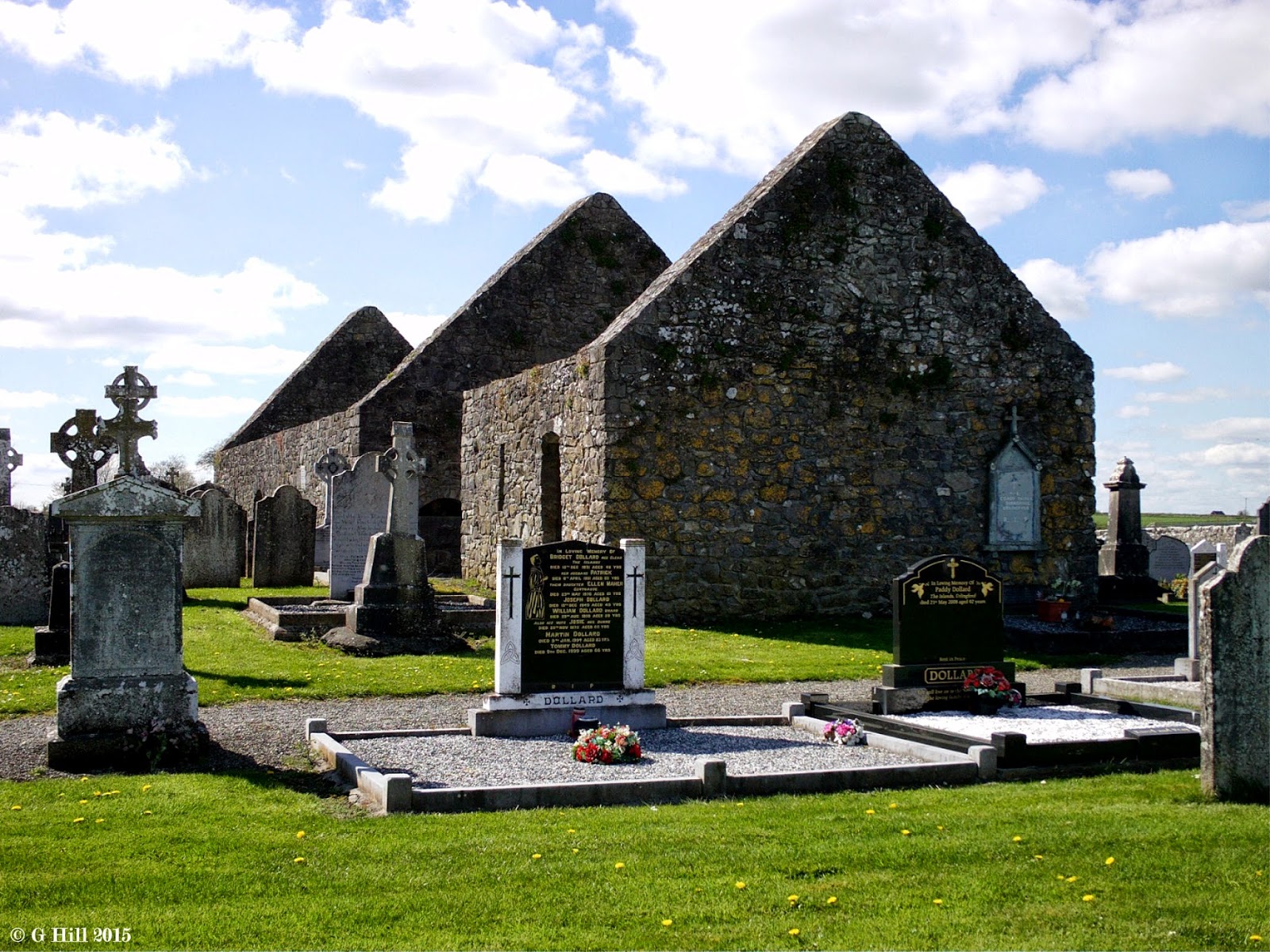 Urlingford Castle & Church lie in close proximity to each order on opposite banks of the River Goul. The five storey Castle was built in the 15th century by the Mountgarret Butlers a significant landowning family and would have had a large defensive bawn surrounding it. A print from 1781 depicts attached buildings to its North facing wall and a partial wall along its West side but it was pretty much abandoned and ruinous by then. All of the additional structures and indeed parts of the castle were demolished and used to build the nearby Mill. All that remains of Castle today is its South facing wall and slivers of the West and East walls leaving the Castle jutting up shard-like from the ground.
The castle lies on private land but can be pretty much plainly seen from the road side gate. It still looks very commanding Its remaining wall standing to its full height with the exception of its fifth floor window which is missing leaving a gap at the centre top.
Although the Castle is divided from the Church by the river, the road runs over the Goul and the Mill graveyard in which the Church stands is easily accessible by way of a stile in the wall at the bend of the road. The Church is also believed to have been constructed in the 15th century and added to over subsequent years. Records show that by the last decade of the 19th century it was completely covered in ivy, but a massive restoration project in the 1970’s uncovered it and it remains that way today. All of the walls and gables stand to full height and are in very reasonable condition but even so it remains a very plain structure with few features of note. The Castle remains the most aesthetically pleasing of the two.
To find the ruins take the M8 heading South and exit at junction 4 taking the first exit off the roundabout on top of the exit ramp onto the R693. Drive to the next roundabout and then take the second exit right onto the R639. After about 500m you will enter Urlingford. In the village take the right hand turn at Bowden’s store onto Mill rd. Drive for approx. 350m and you will spot the Castle ahead of you. Parking adjacent to the gate is possible.
Posted by Castlehunter at 13:41