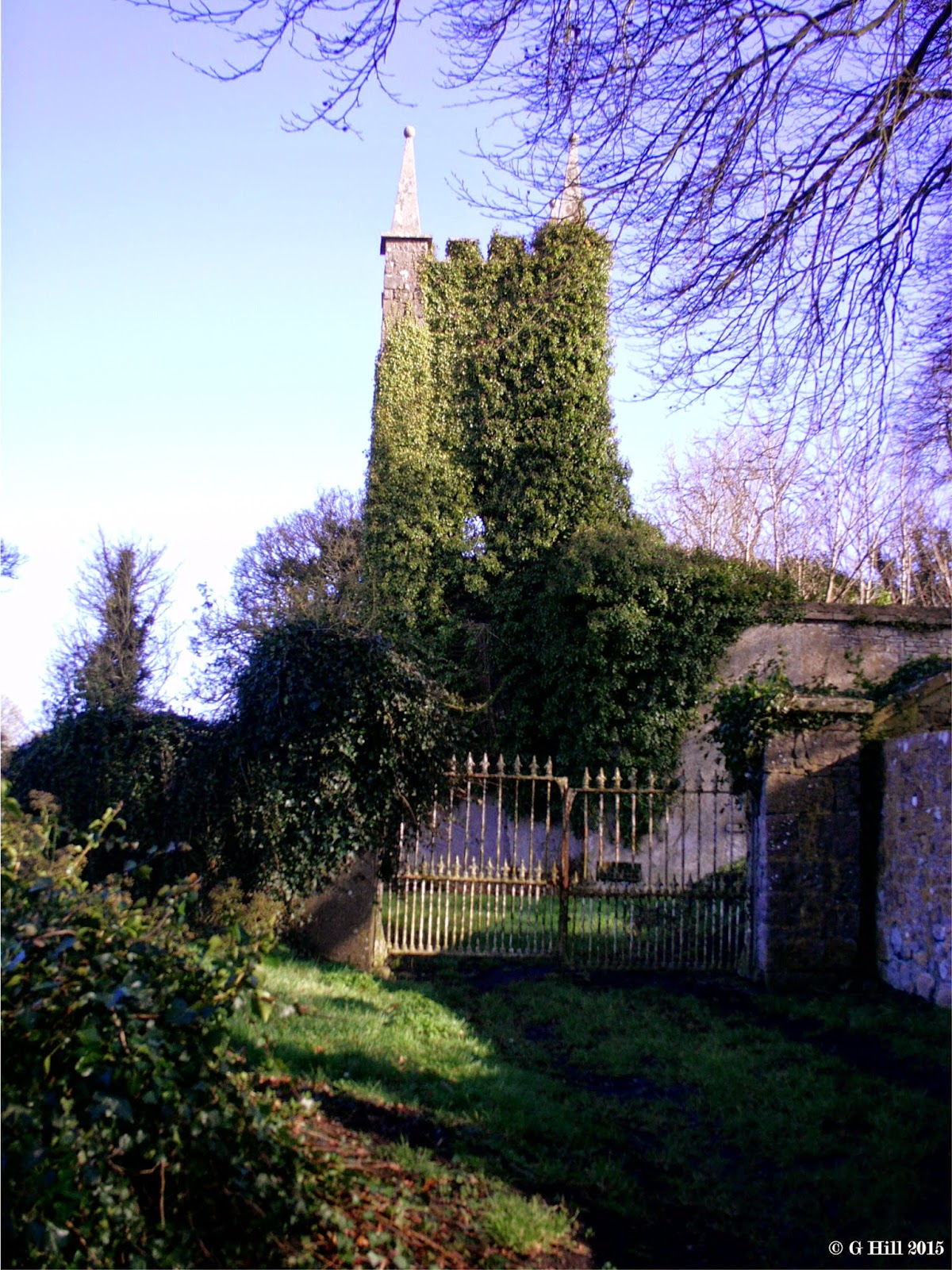 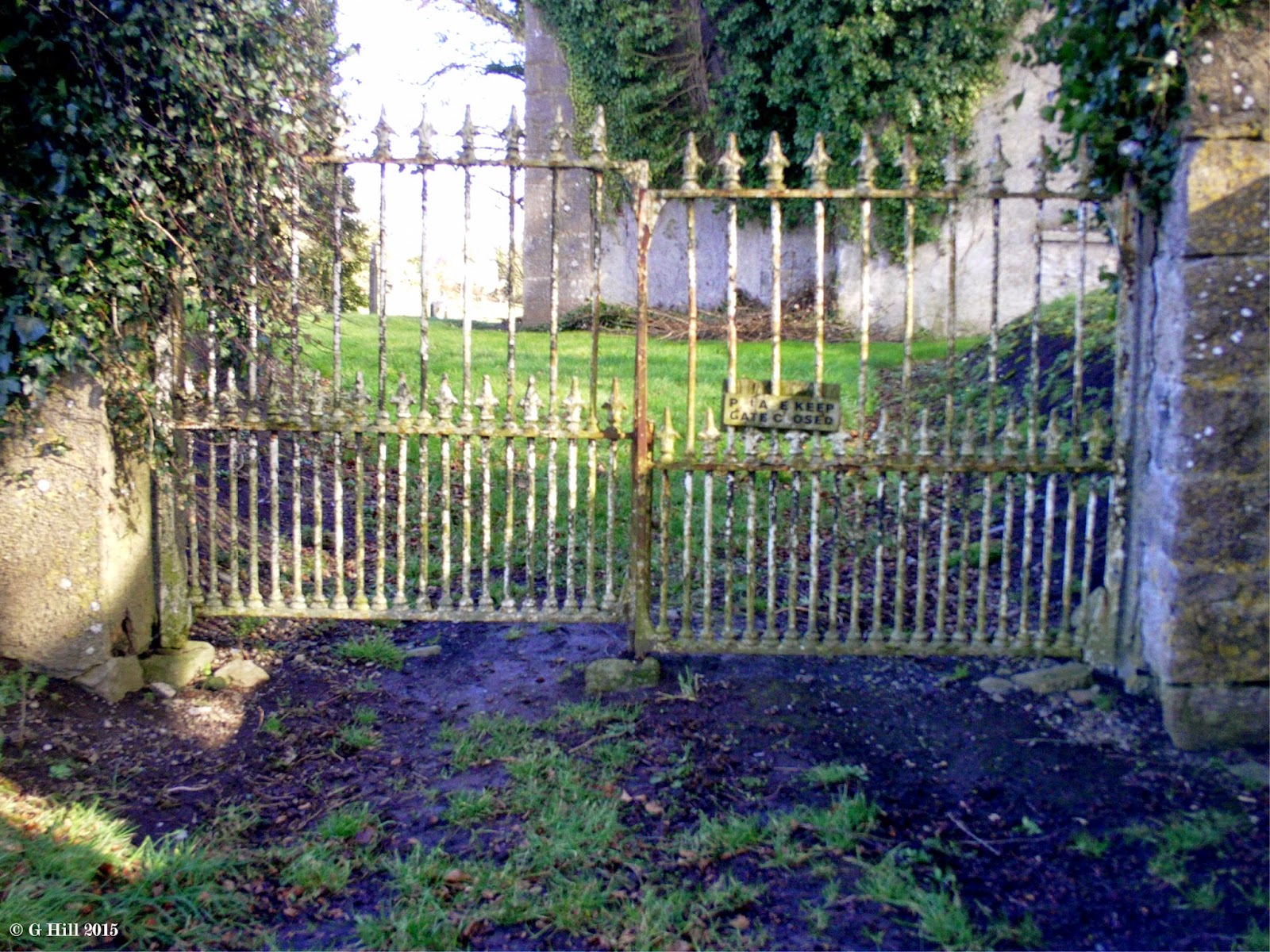 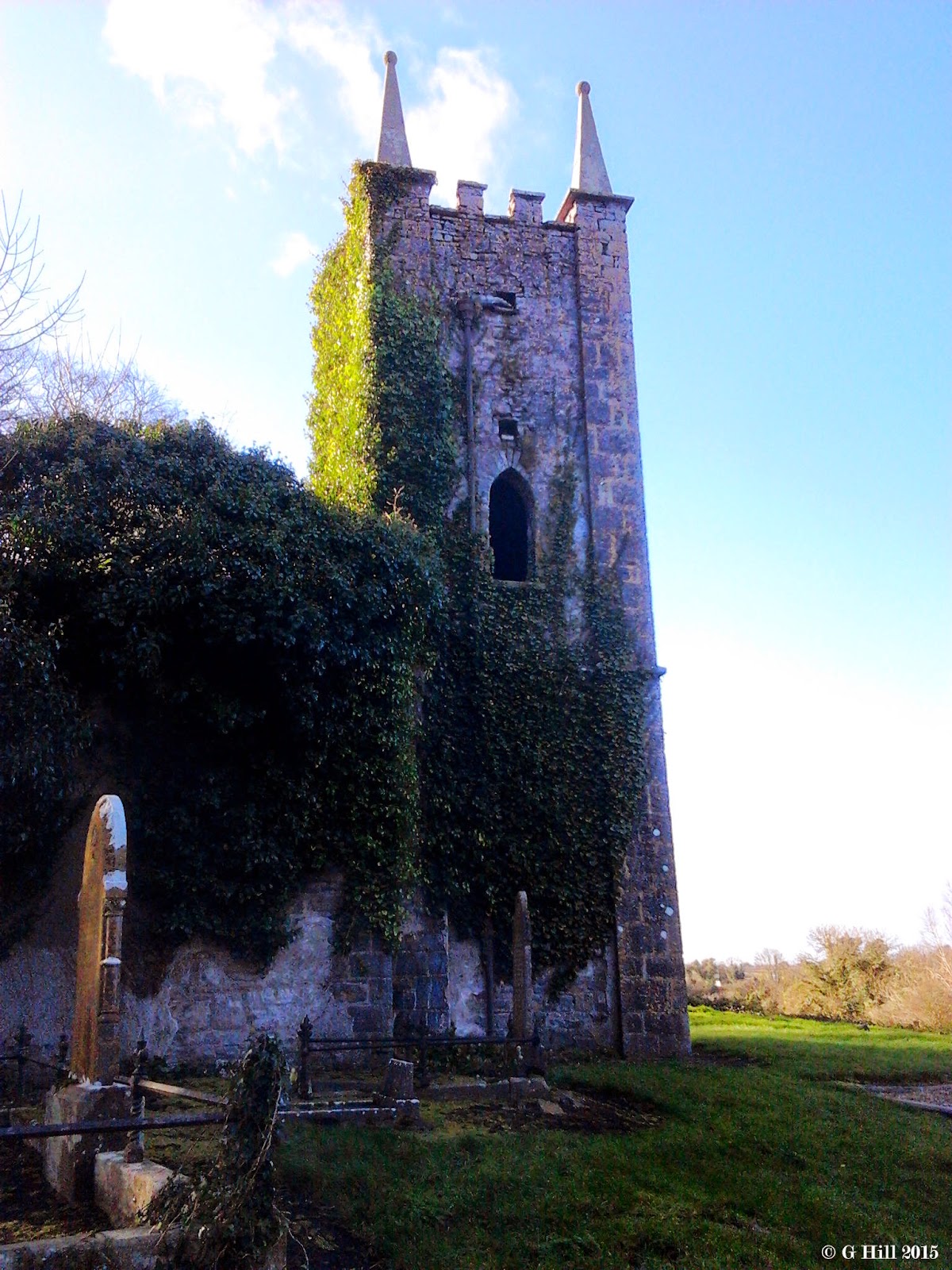 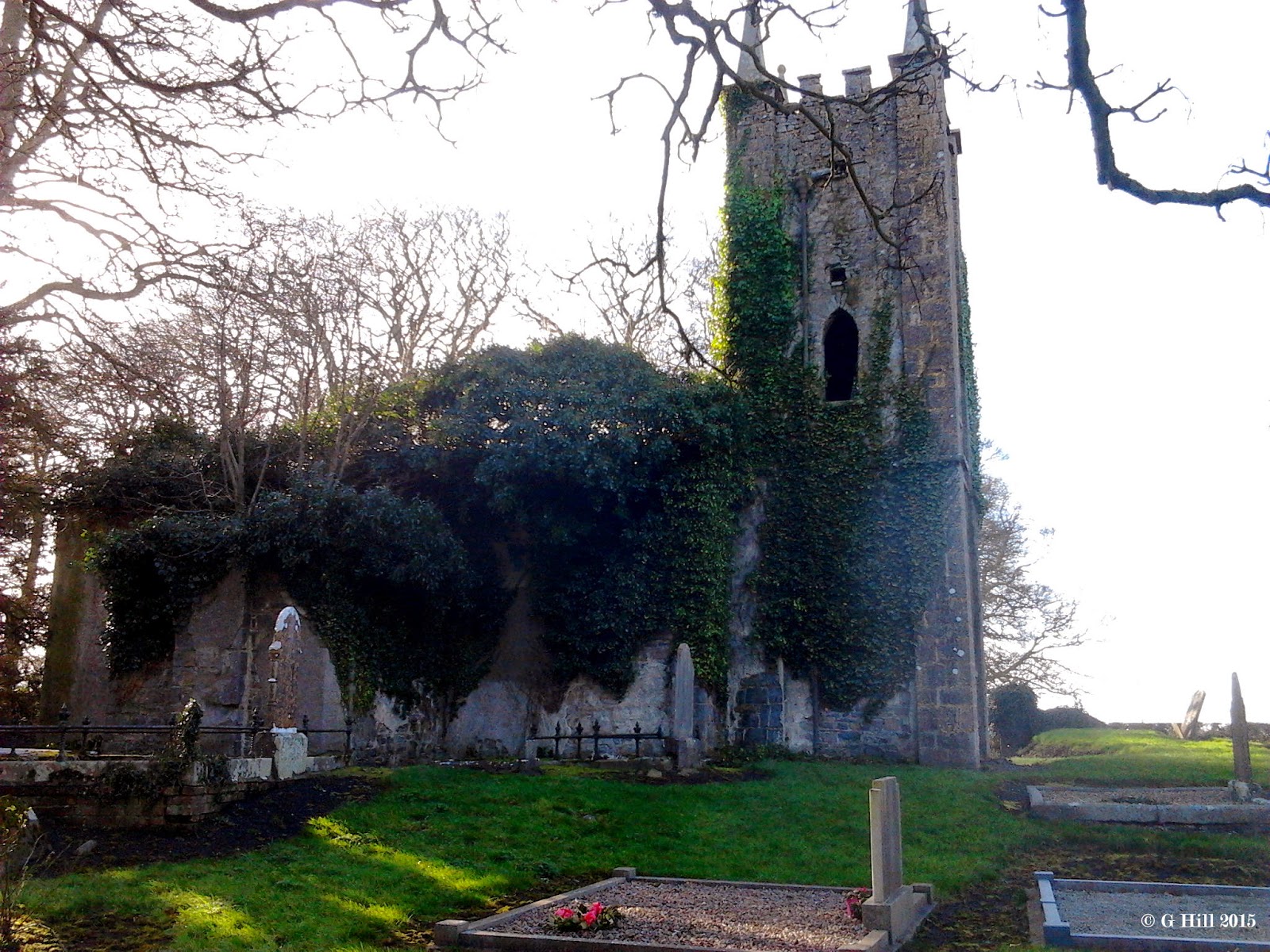 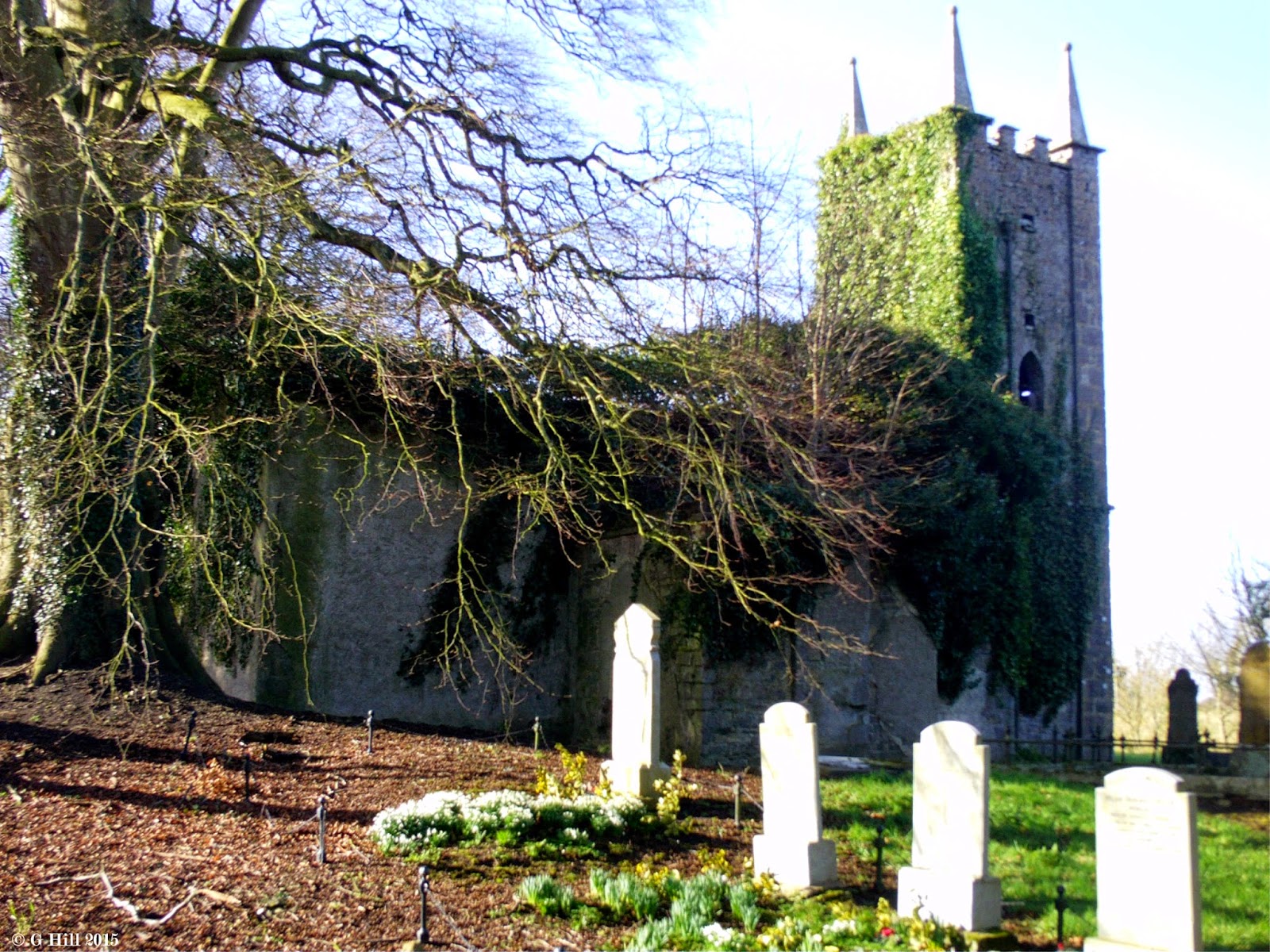 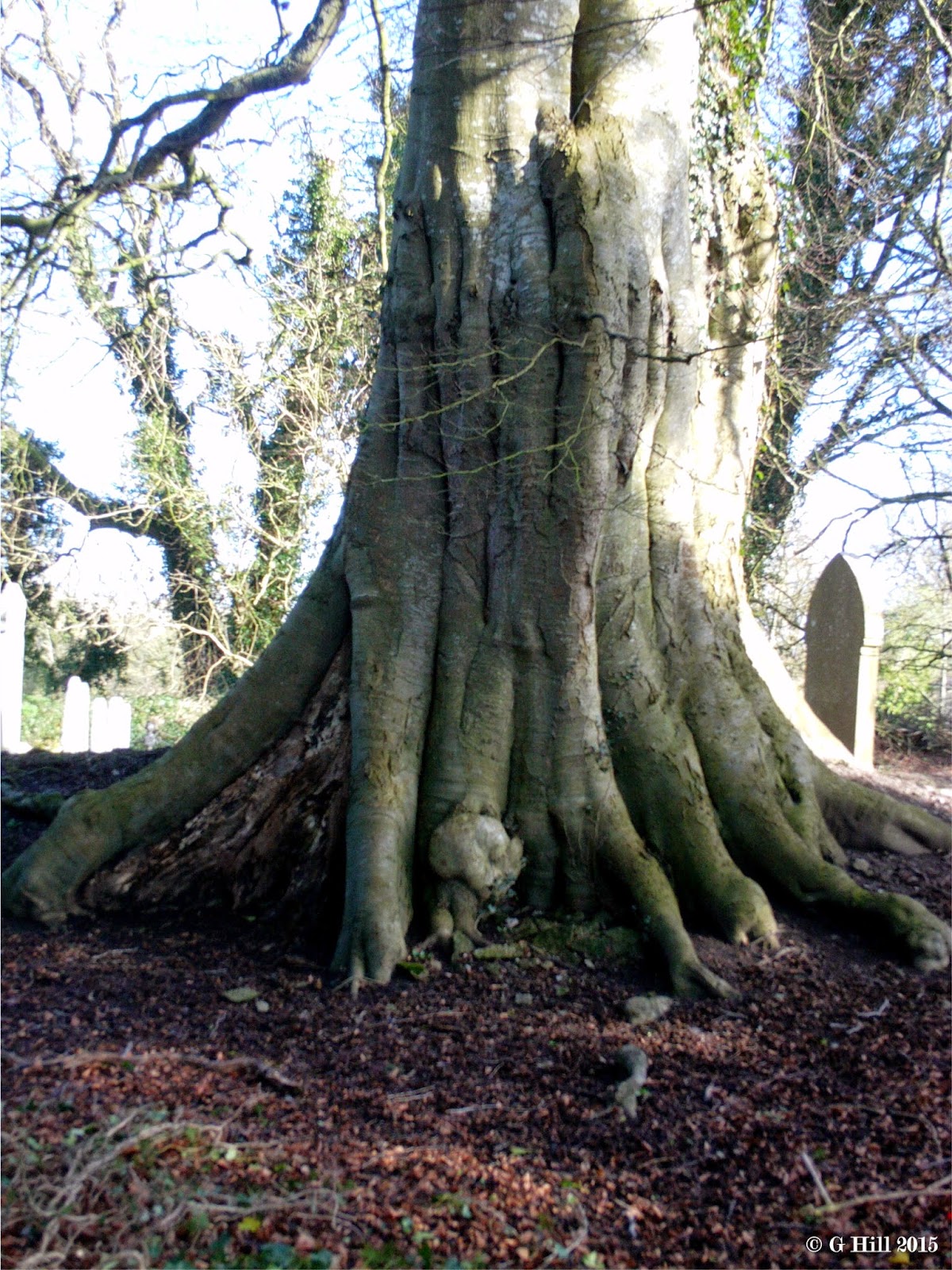 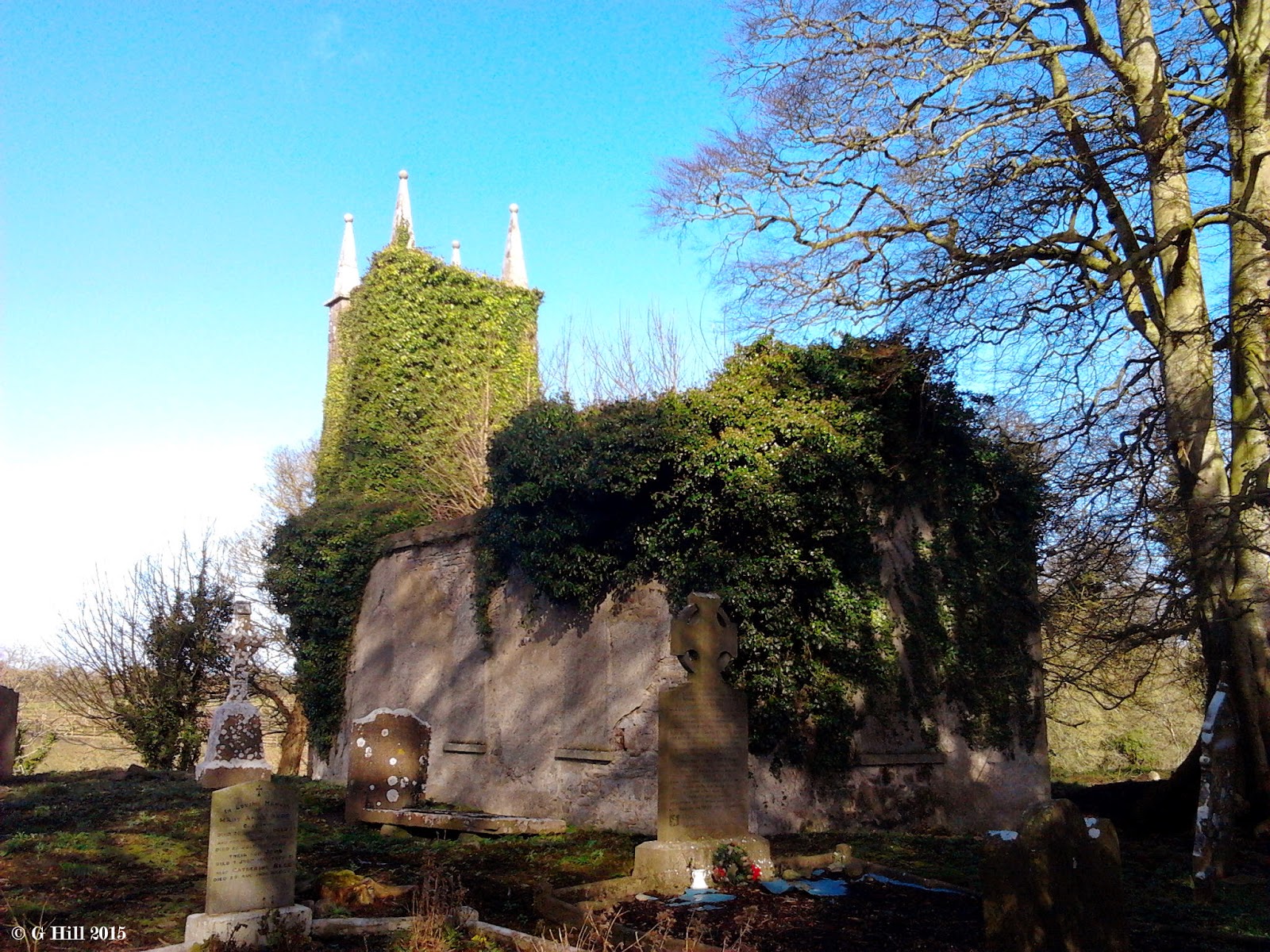 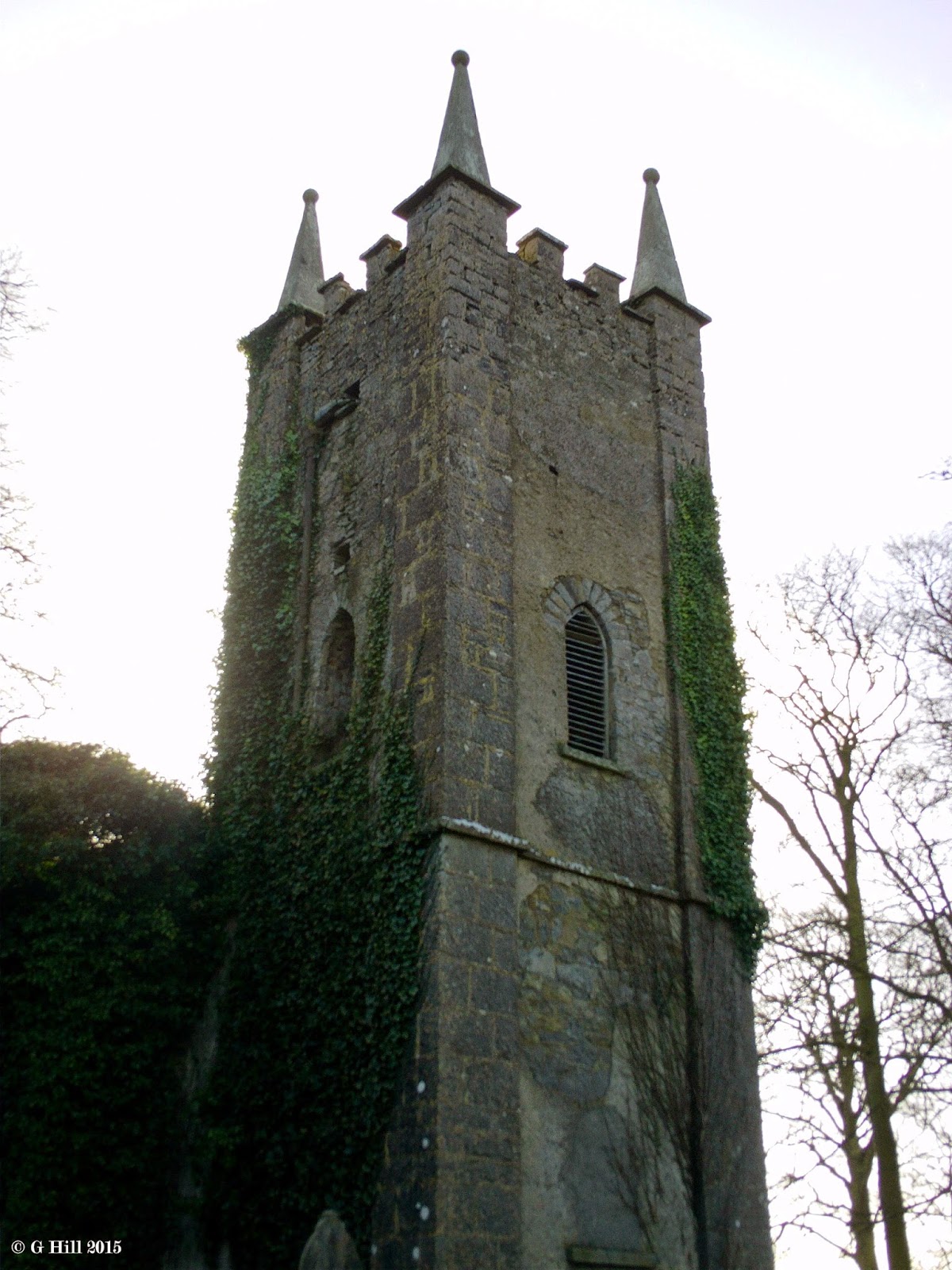 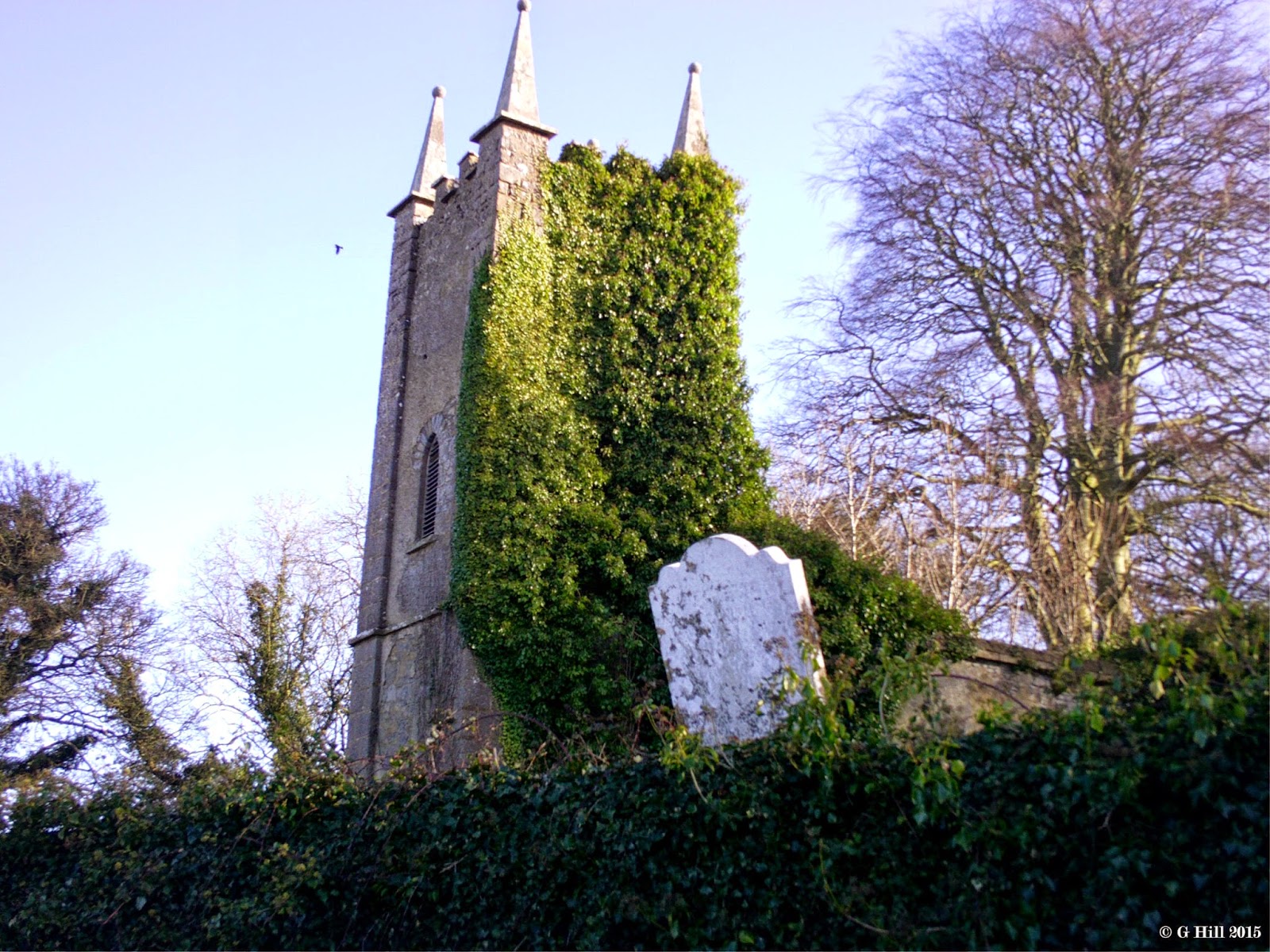 This former Church of Ireland Church was constructed in 1821 and was one of the Prebends of St Patrick's Cathedral. Whether due to lack of patronage or some other reason it was closed in 1960 and over the years the door and windows blocked up. It now sits atop a grassy mound with ivy encroaching heavily on its Southern side.
I came across this somewhat picturesque ruin while heading towards Garristown. If I had been travelling in the other direction I would most likely have missed it as it sits above the road near a bend and trees and shrubbery hide it from view. However I managed to park the car on a muddy incline that led to the entrance gates. I had expected as in so many sites to find the gate chained and locked but not in this case, a simple sign with worn letters requested that the gate be kept closed. I obliged as I entered the surrounding graveyard. It appeared to be still in use.
While I did not immediately get a vibe at this site I have to admit that looking at the photos later the place does look a bit on the creepy side in an M R James sort of way. I strolled around in the watery sunshine uninhibited disappointed to find no entry to the ruins apart for a small hole in the wall at ground level on the Northern side that maybe a child could get through, though God knows what he might find inside at this stage. Adjacent to this hole is a huge and very gnarled tree with some very odd shapes on it. One section looked like some deformed baby was curled up against it. Really weird.
The tower dominates the ruins and although covered on its South side by ivy still appears to be quite sound,.after all the Church has only been abandoned for fifty five years. The tower is topped by four tall pyramidal spikes on each corner and a castellated effect in between.Its hard to determine if there is still a roof on the Church as the trees and ivy disguise it, but more than likely it has been de-roofed as this was a method of not having to pay further rates or taxes on abandoned buildings.
So if travelling in the area take a look at this creepy old ruin but be careful parking as you will have to back out onto a bend and the road while quite rural does have the odd speeding motorist.
To find the ruin is a bit of a long winded journey but here goes. Heading Northwards on the M50 take the junction 5 exit and follow the exit ramp marked City R135. This exit ramp curls round in a circle an brings you to a set of lights at Charlestown shopping centre. Turn left at the junction and drive approx 350m until you reach a junction with The R104 (St Margaret's Rd) Turn left and drive until you reach a roundabout and take the first exit left onto the R122 for St Margaret's. Continue for approx. 2KM until you reach another roundabout and turn right onto the R108. This long road takes you around the perimeter of Dublin airport until you reach a T Junction. Turn right the take the first exit left at the next roundabout. This is the continuation of the R108. Drive for approx. 3KM until you reach another T Junction with the R125. Turn left and a few yards later take the first right turn signposted for Ballyboughal. Drive for approx 3KM until you enter Ballyboughal. You will pass a petrol station on your right and about 150m beyond is a left hand turn with a stone cross at the corner. Turn left down this road (R129) and drive until you see a sign pointing left for the L1065 to Oldtown. Follow this road and you will pass a rustic pub with a tractor on its roof. Just beyond this you will come to a T- junction with a water pump opposite. Turn right following the sign for Garristown. Continue for approx 550m keeping your eye on the right and you will spot the Church. As mentioned there is limited parking on the approach incline and care is needed when reversing back onto the road. As requested please close the gate when leaving.
Posted by Castlehunter at 13:24