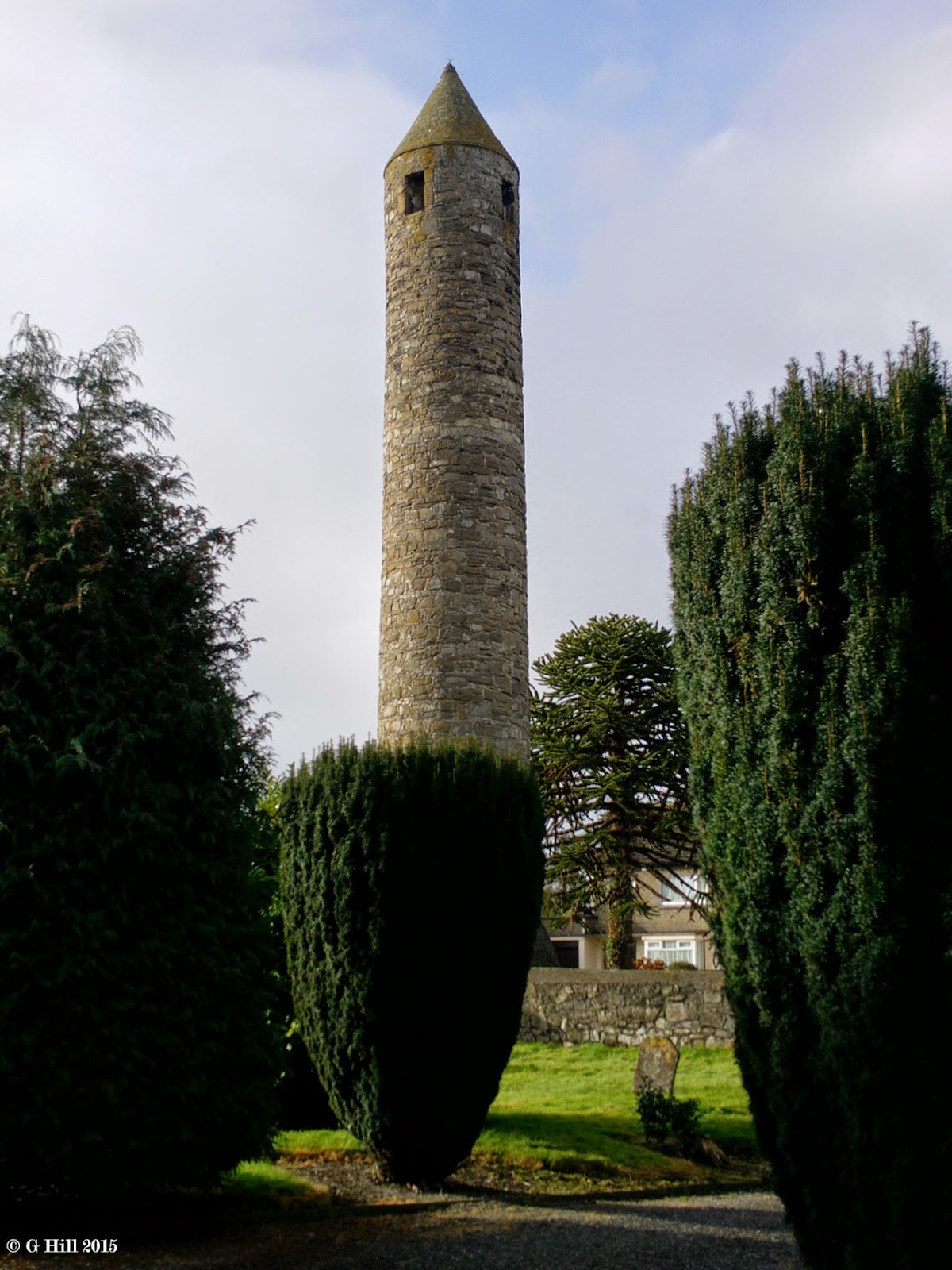 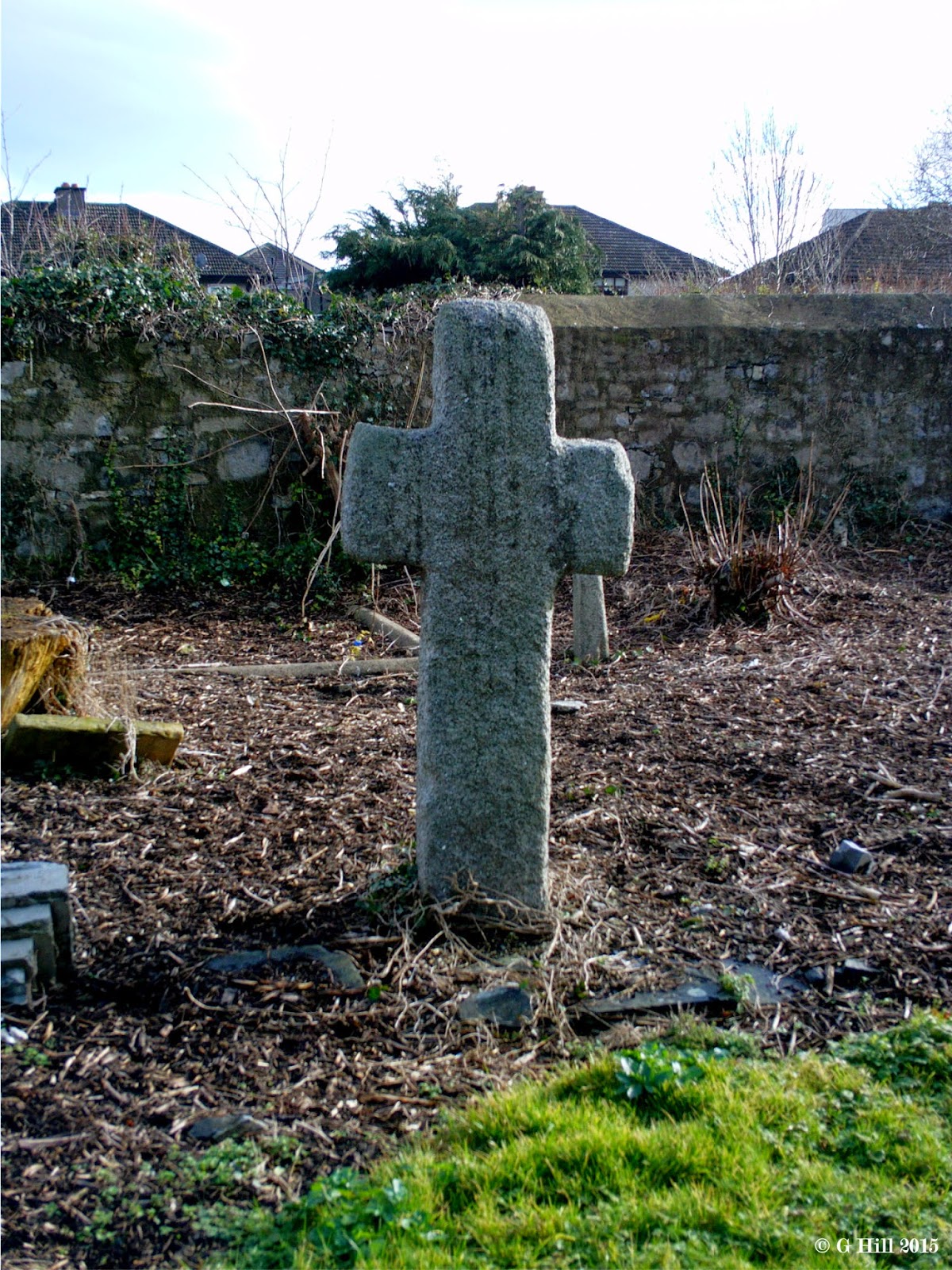 Above & Below Images: The large cross 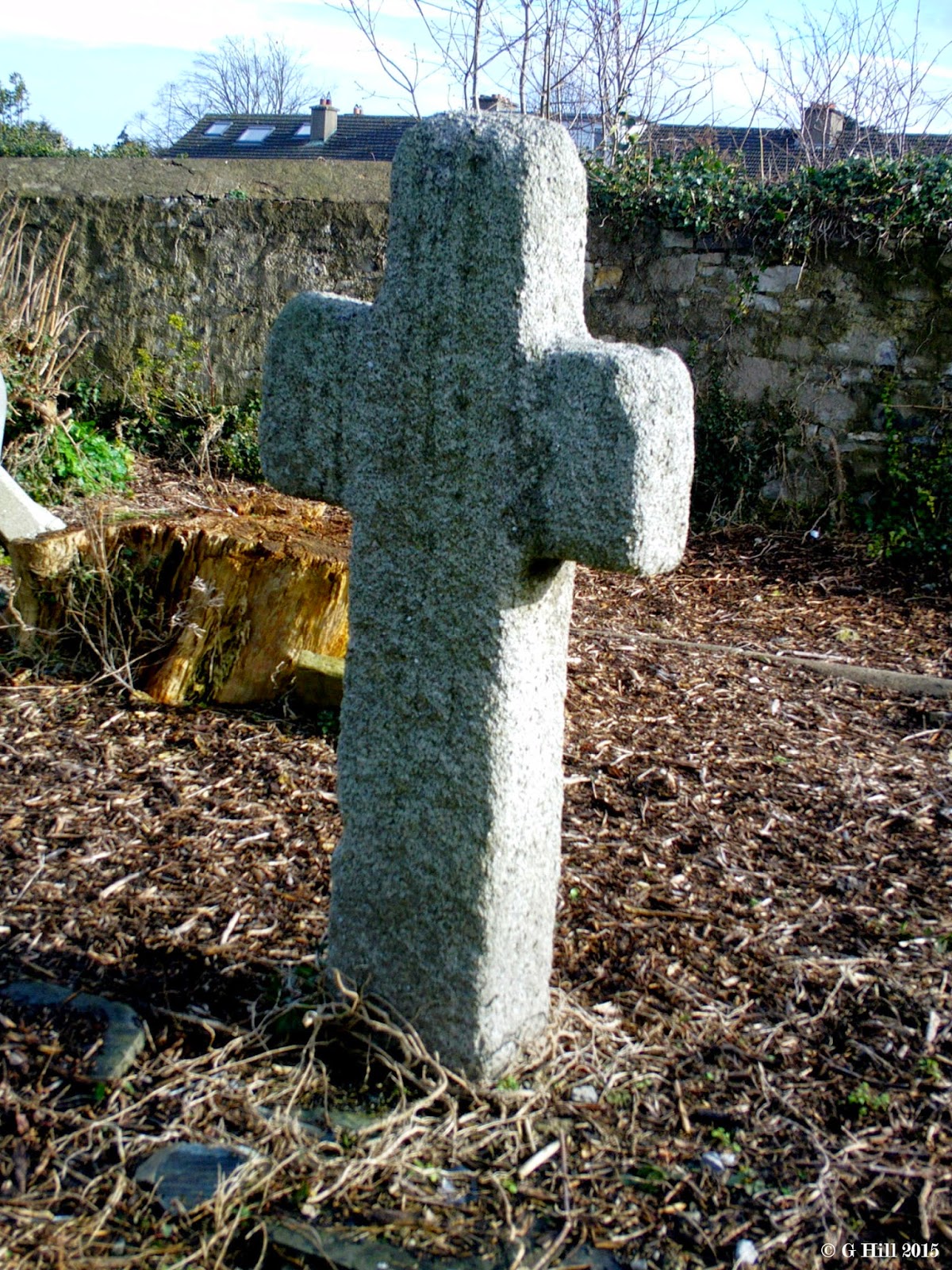 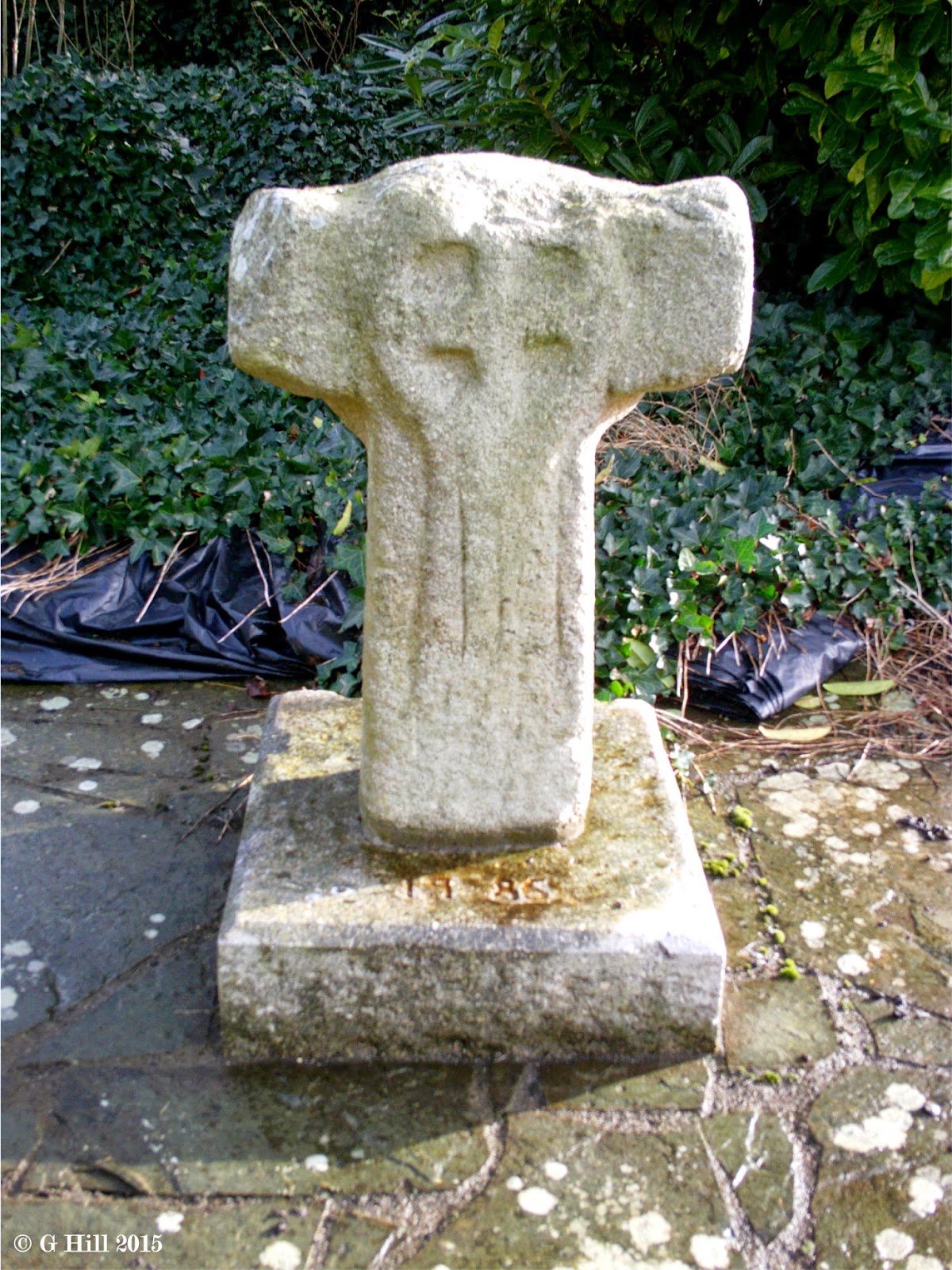 Above & Below Images: The two faces of the smaller cross 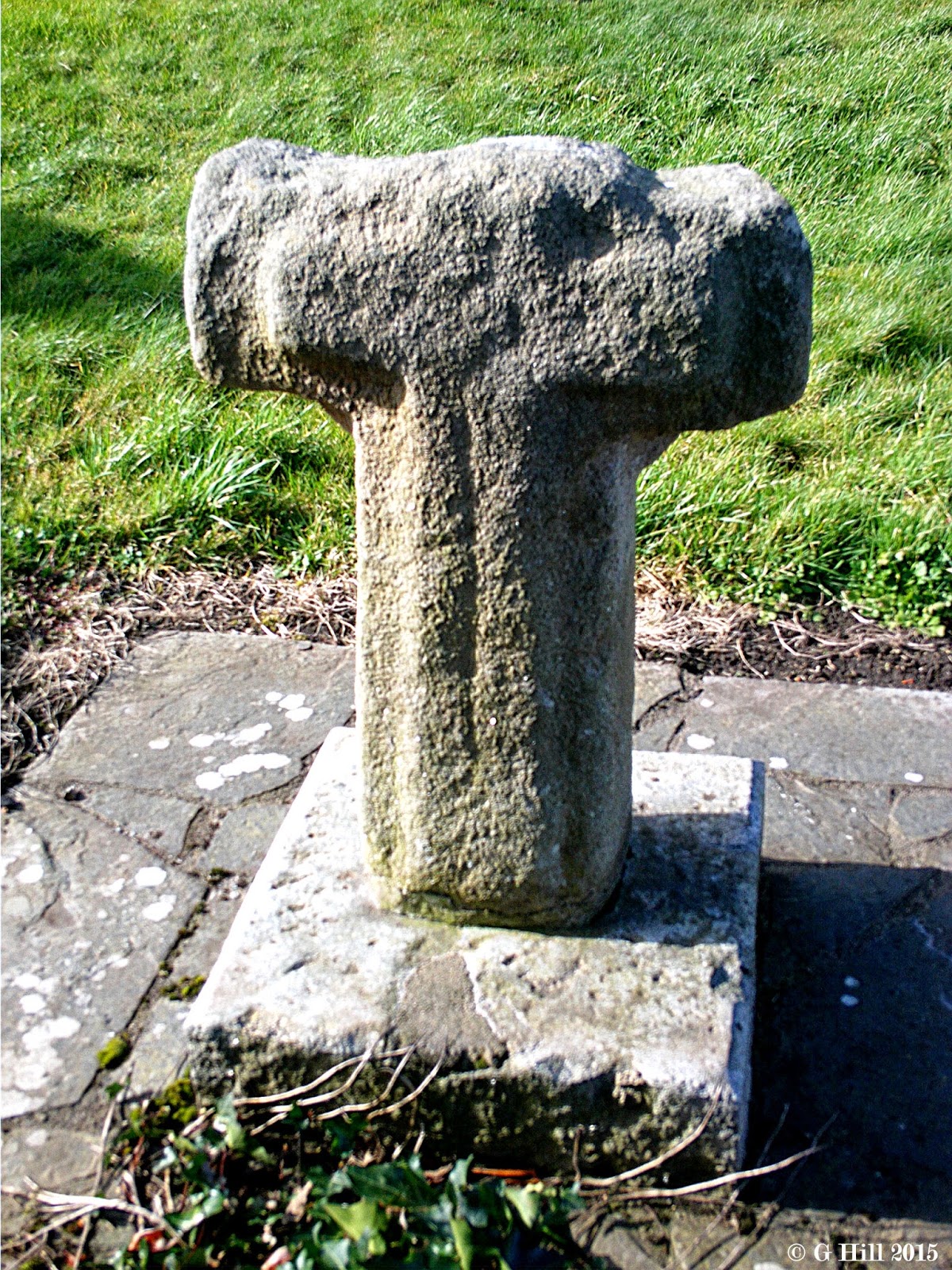 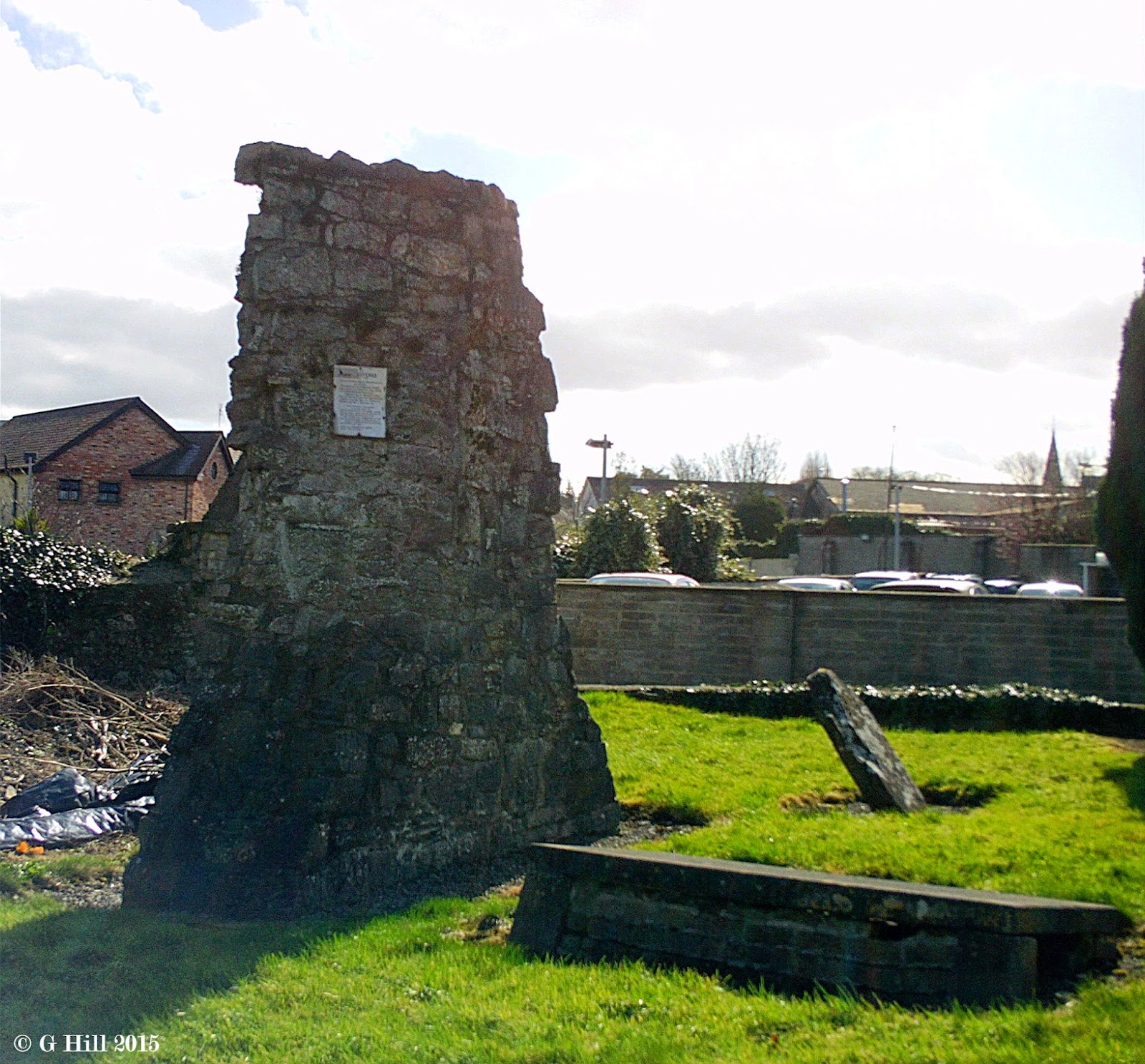 Above & Below 3 Images: Remains of the old Church 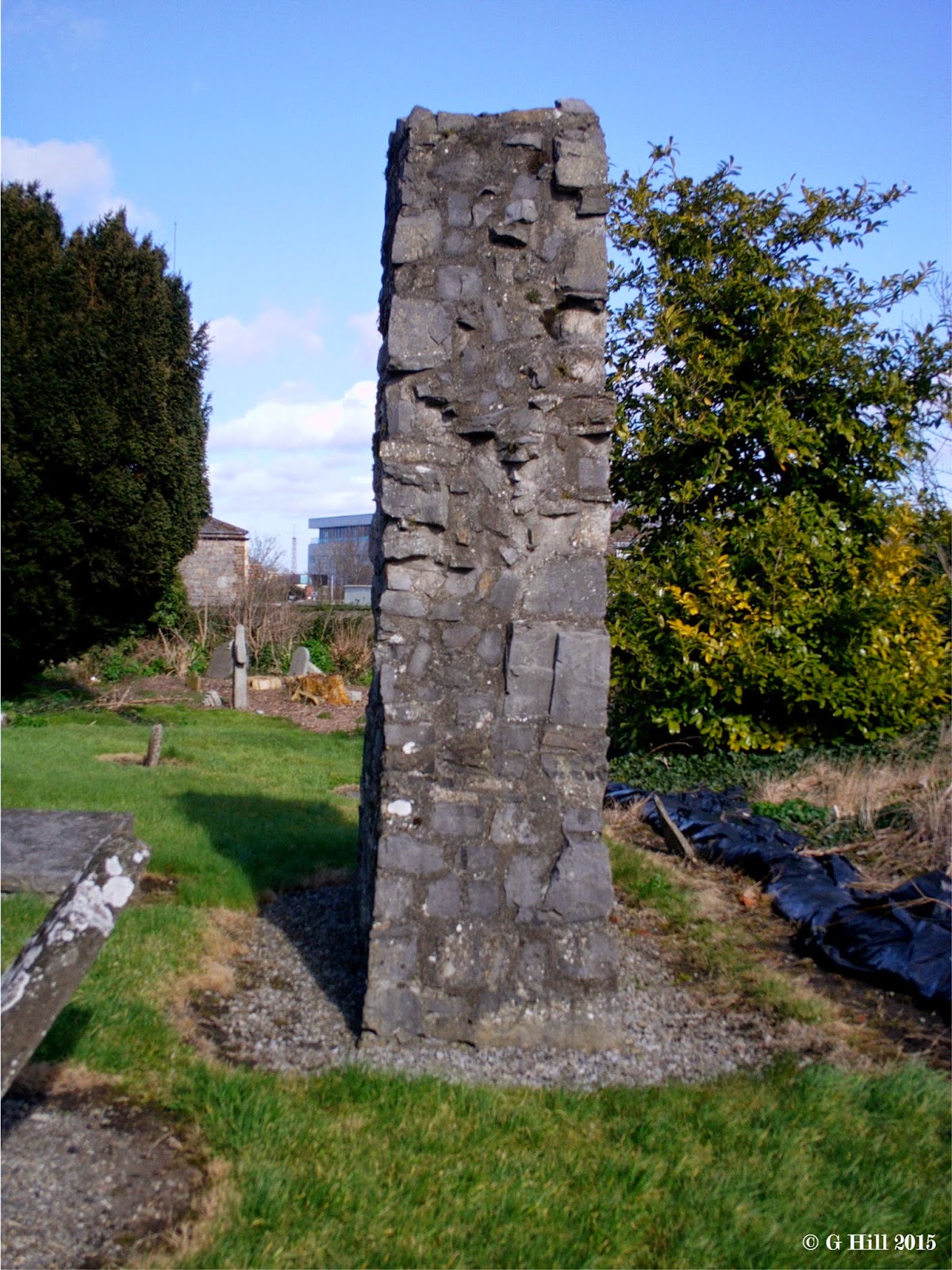 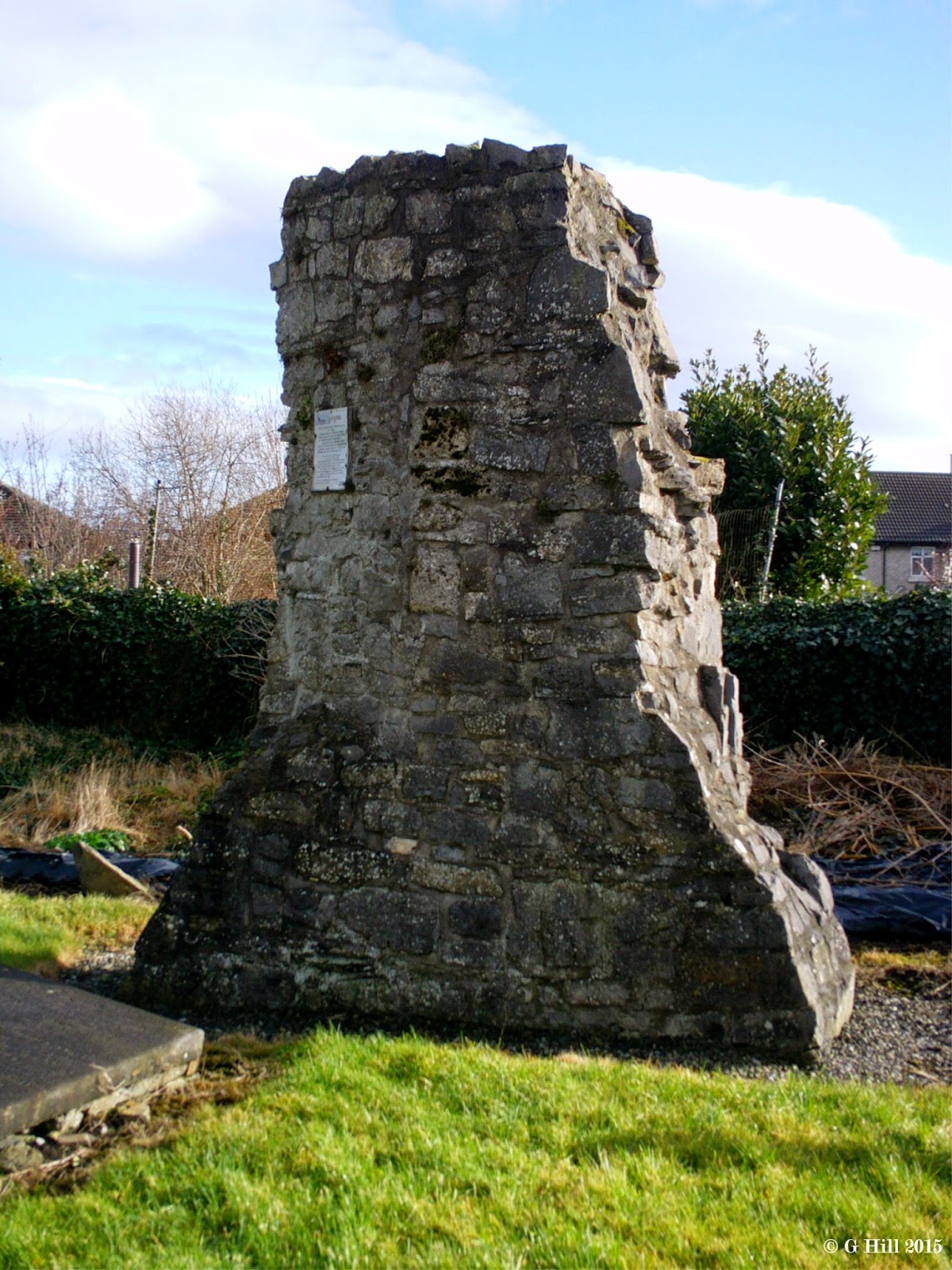 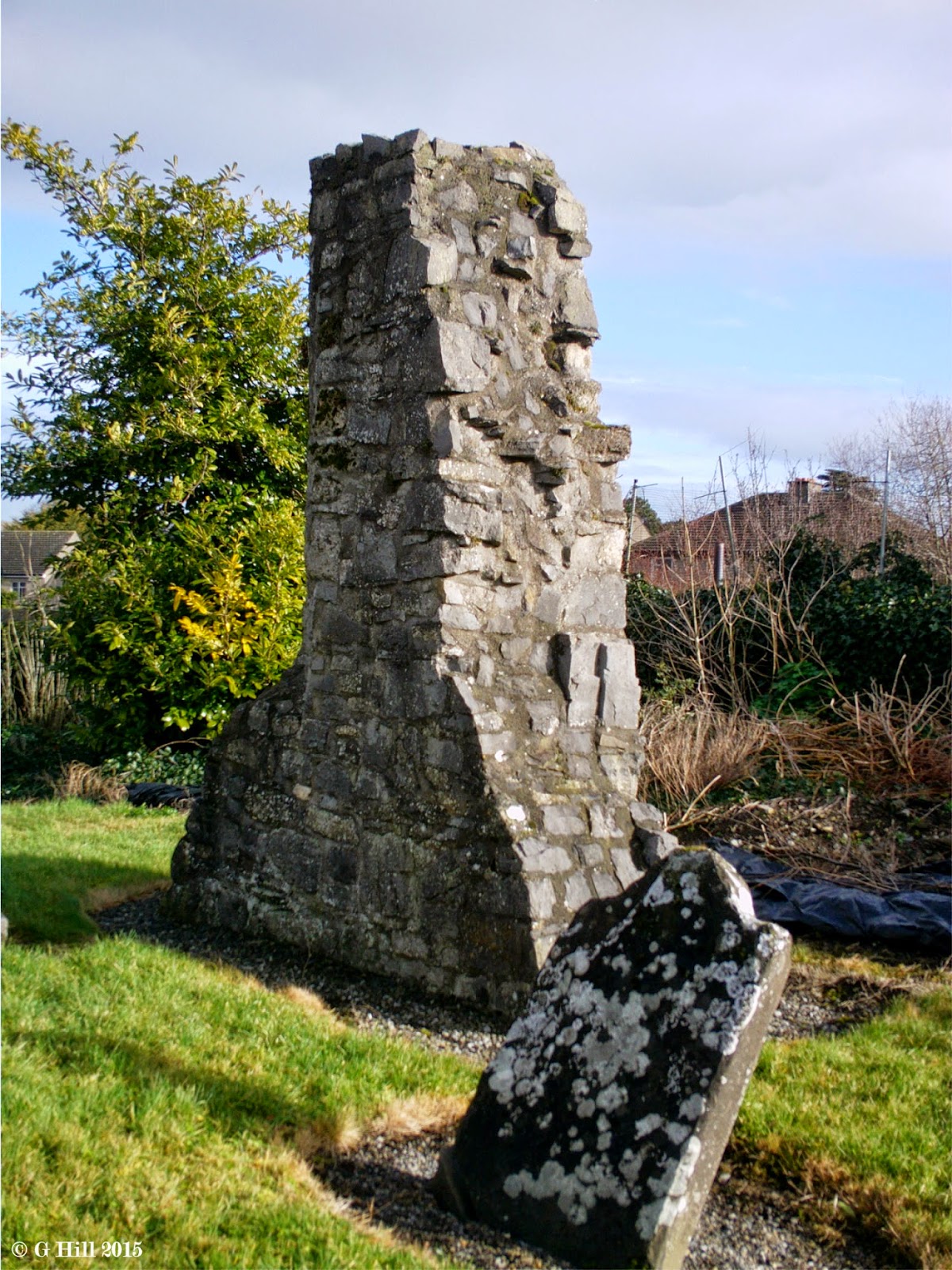 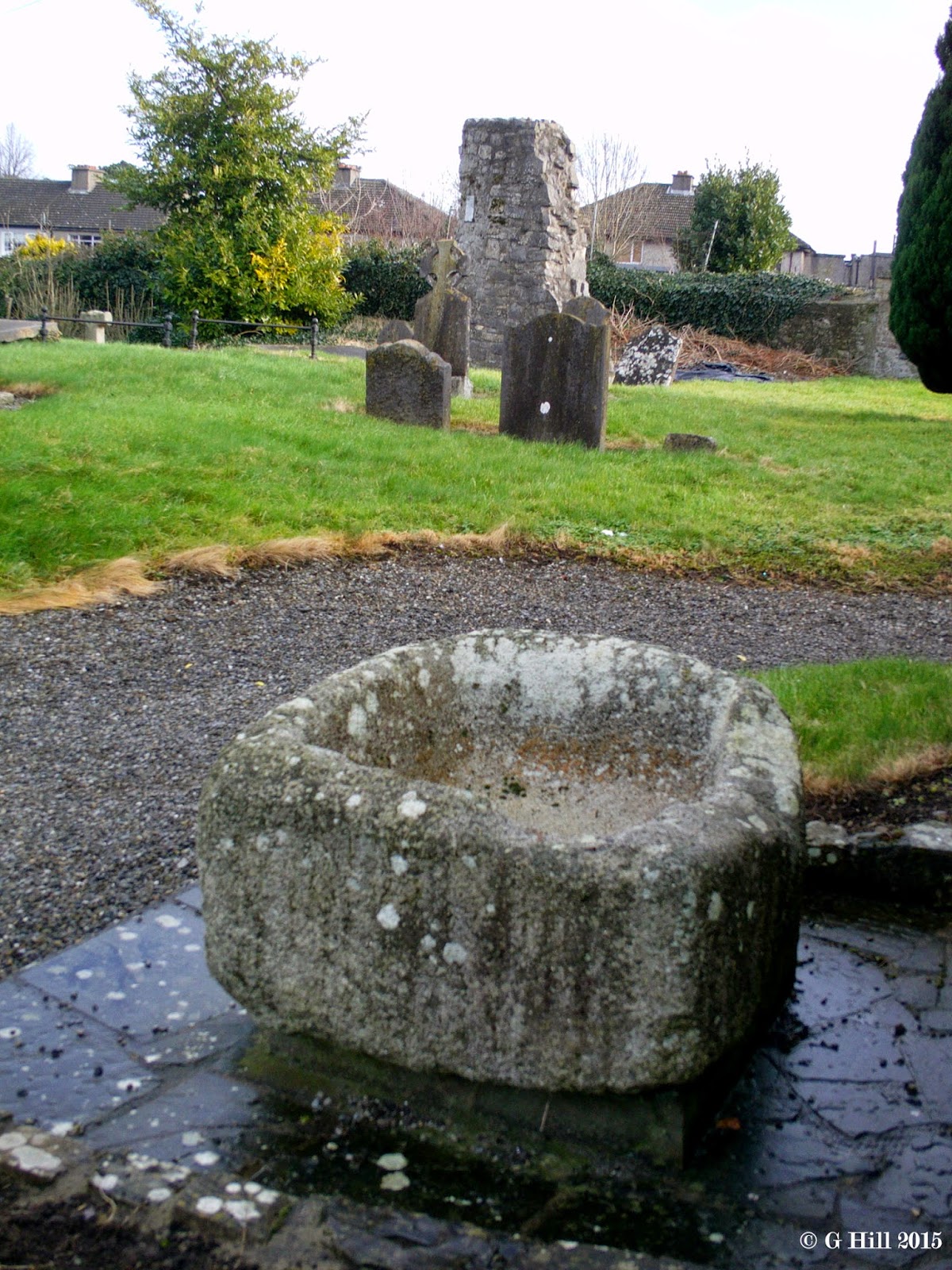 Above Image: The ancient font with Church remains in backround 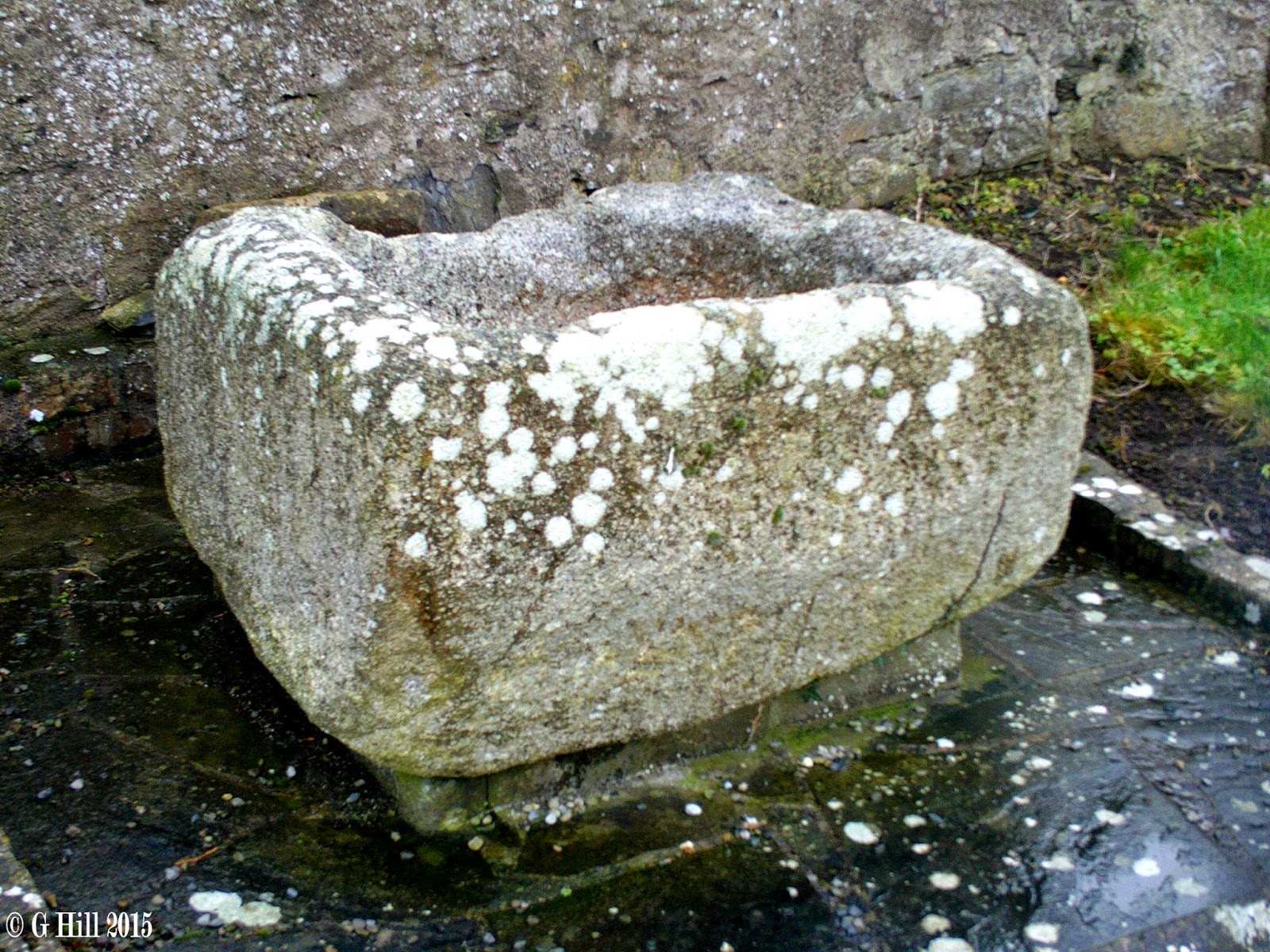 Above Image: Close up of the font 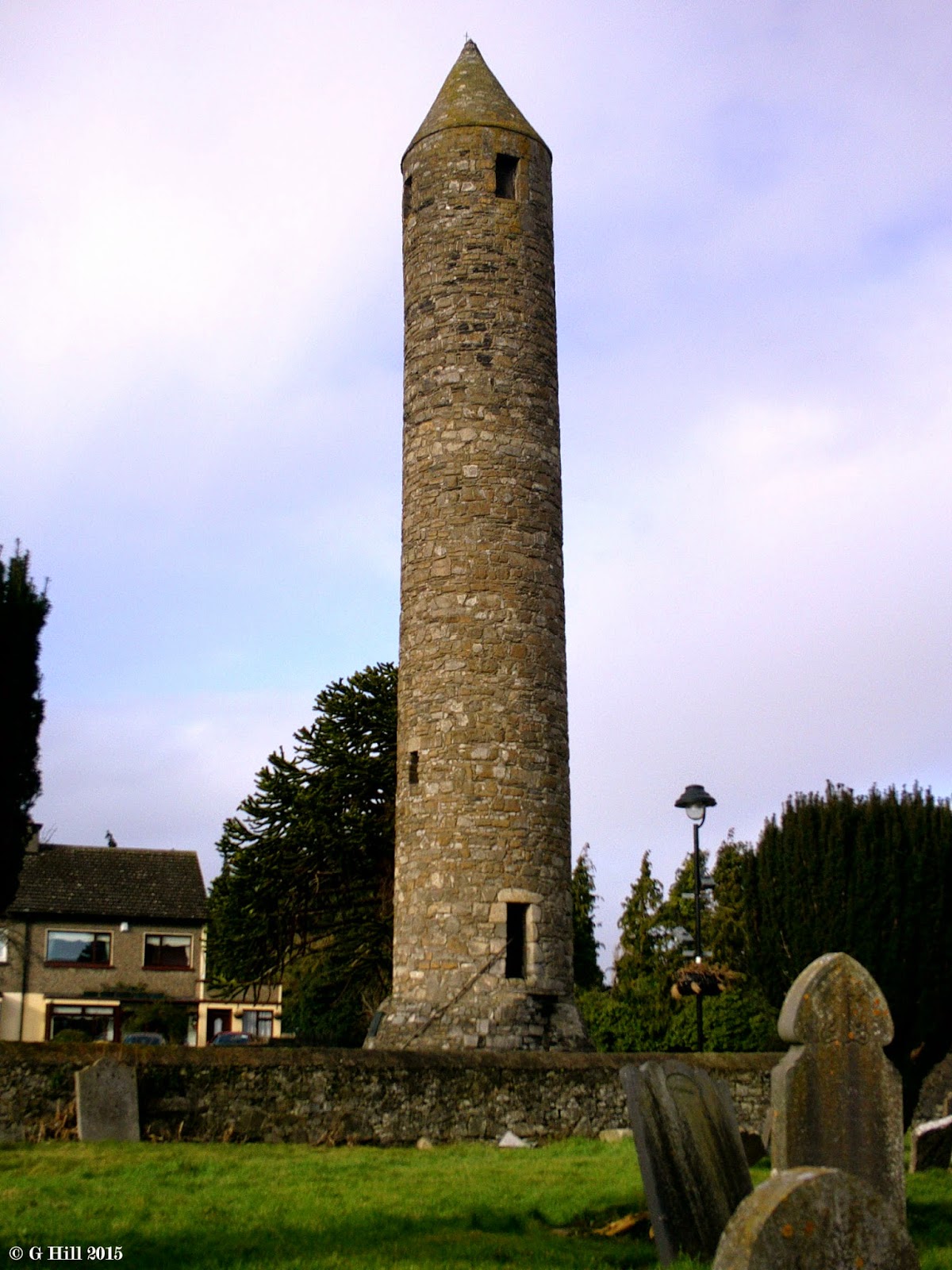 Above Image: The tower as viewed from St Johns 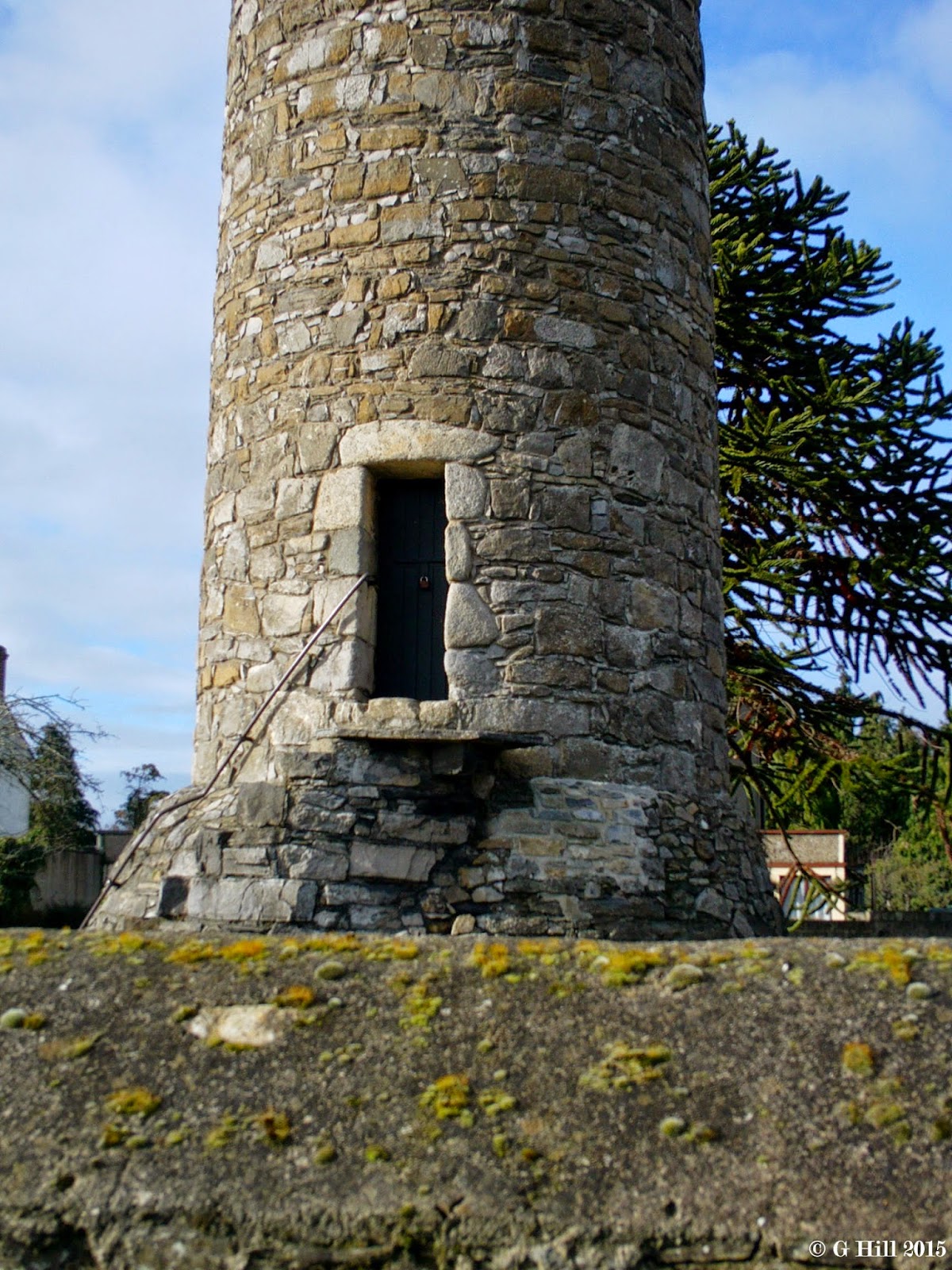 Above Image: Entrance door to the round tower 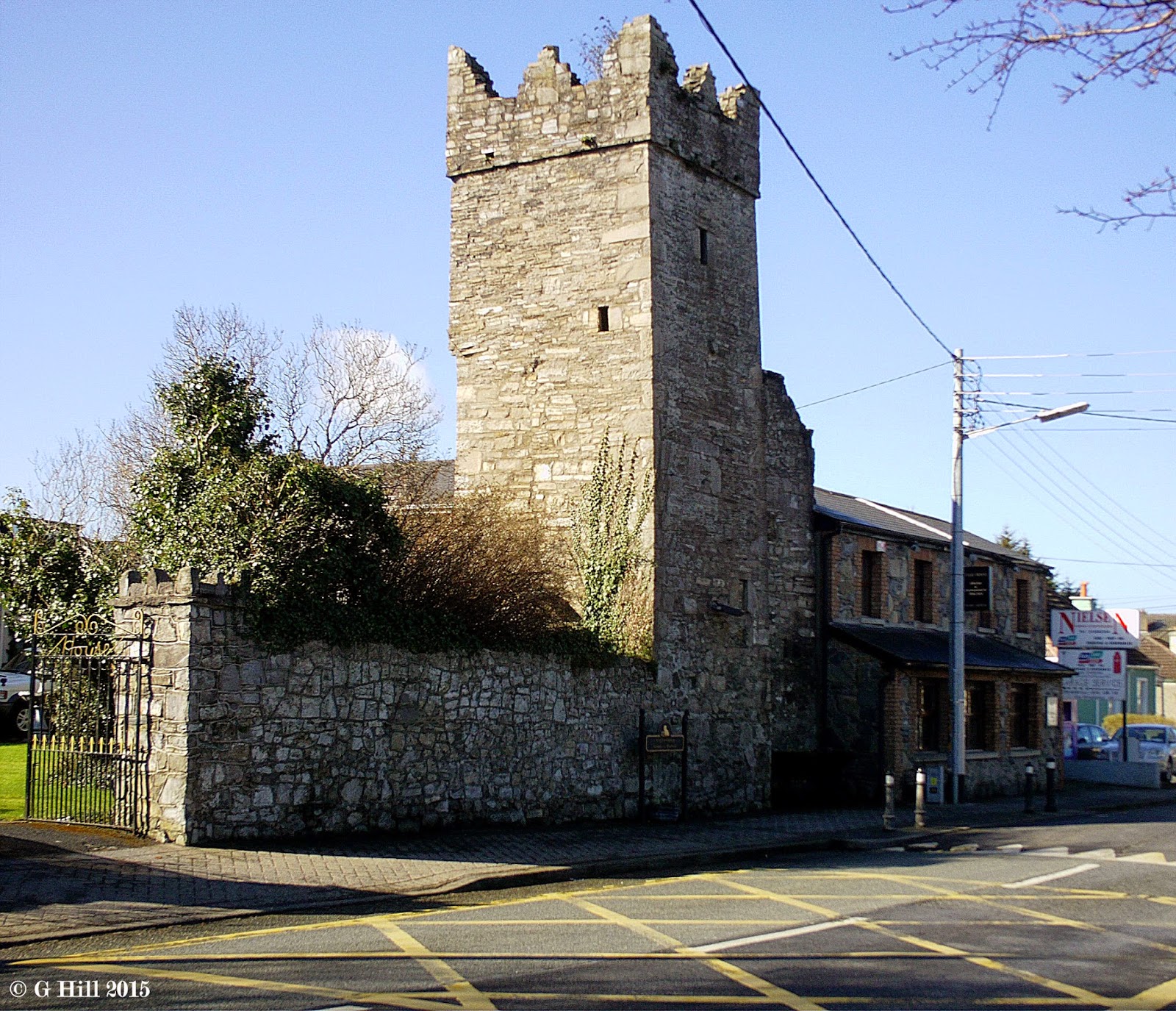 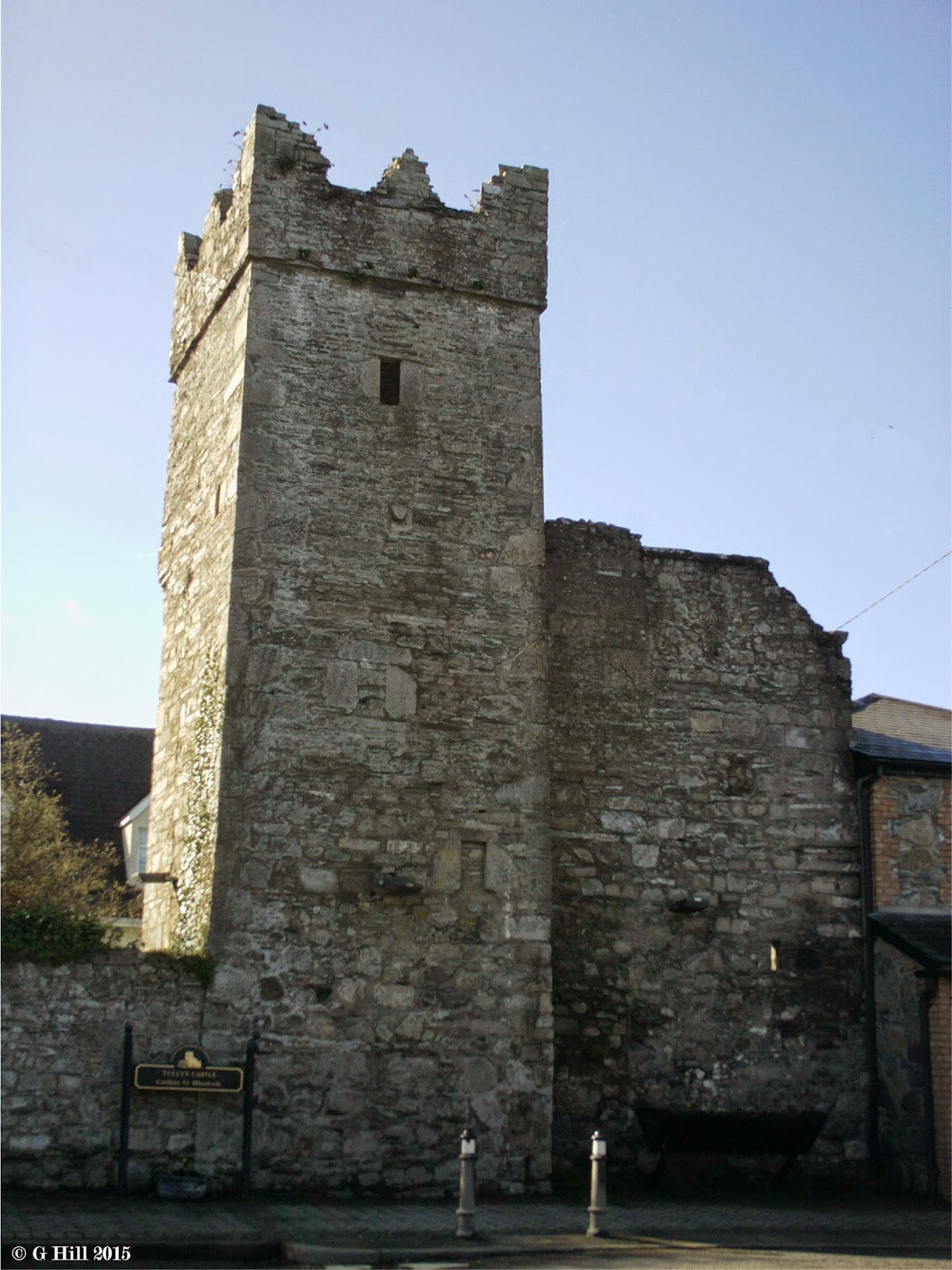 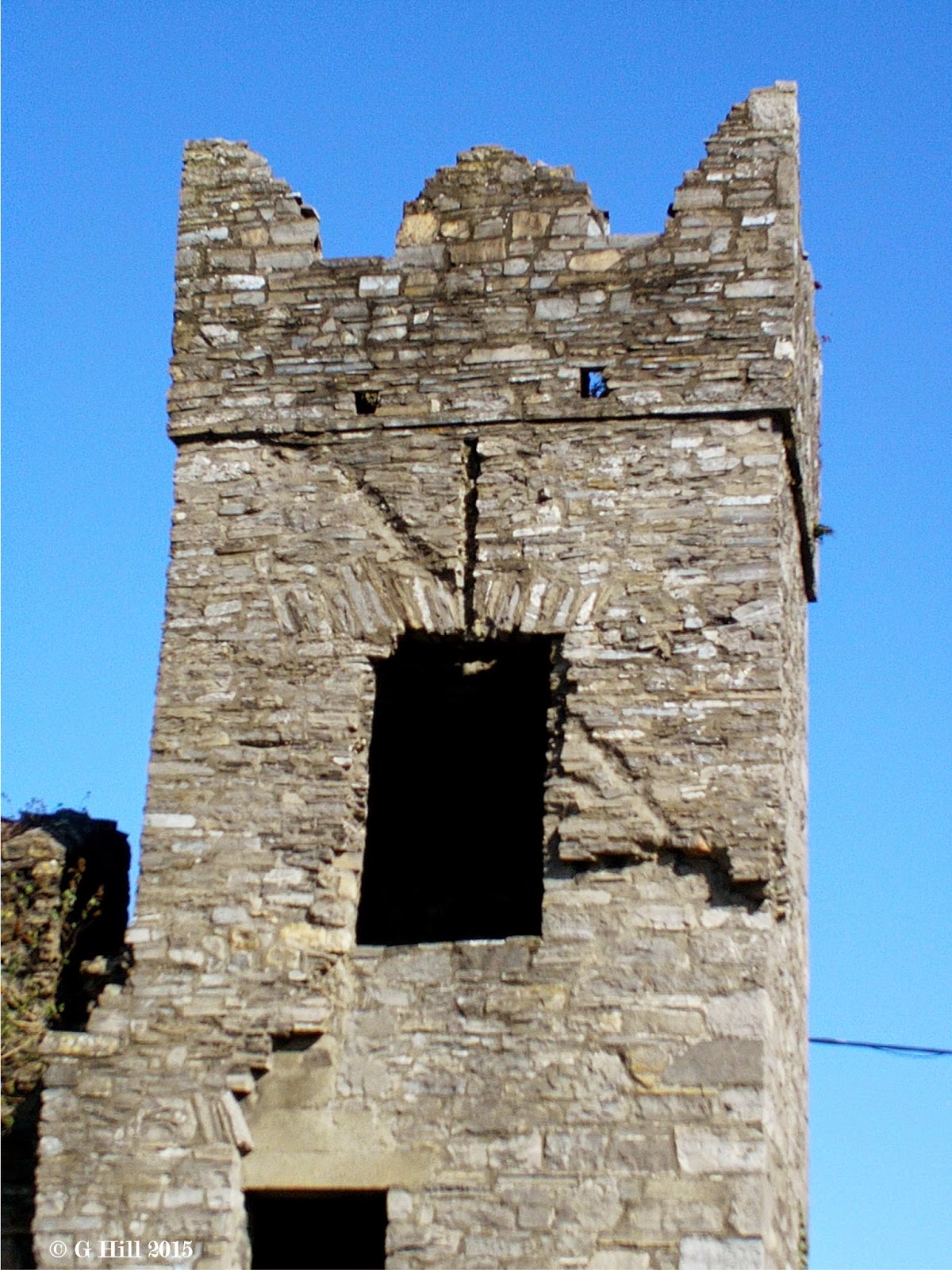 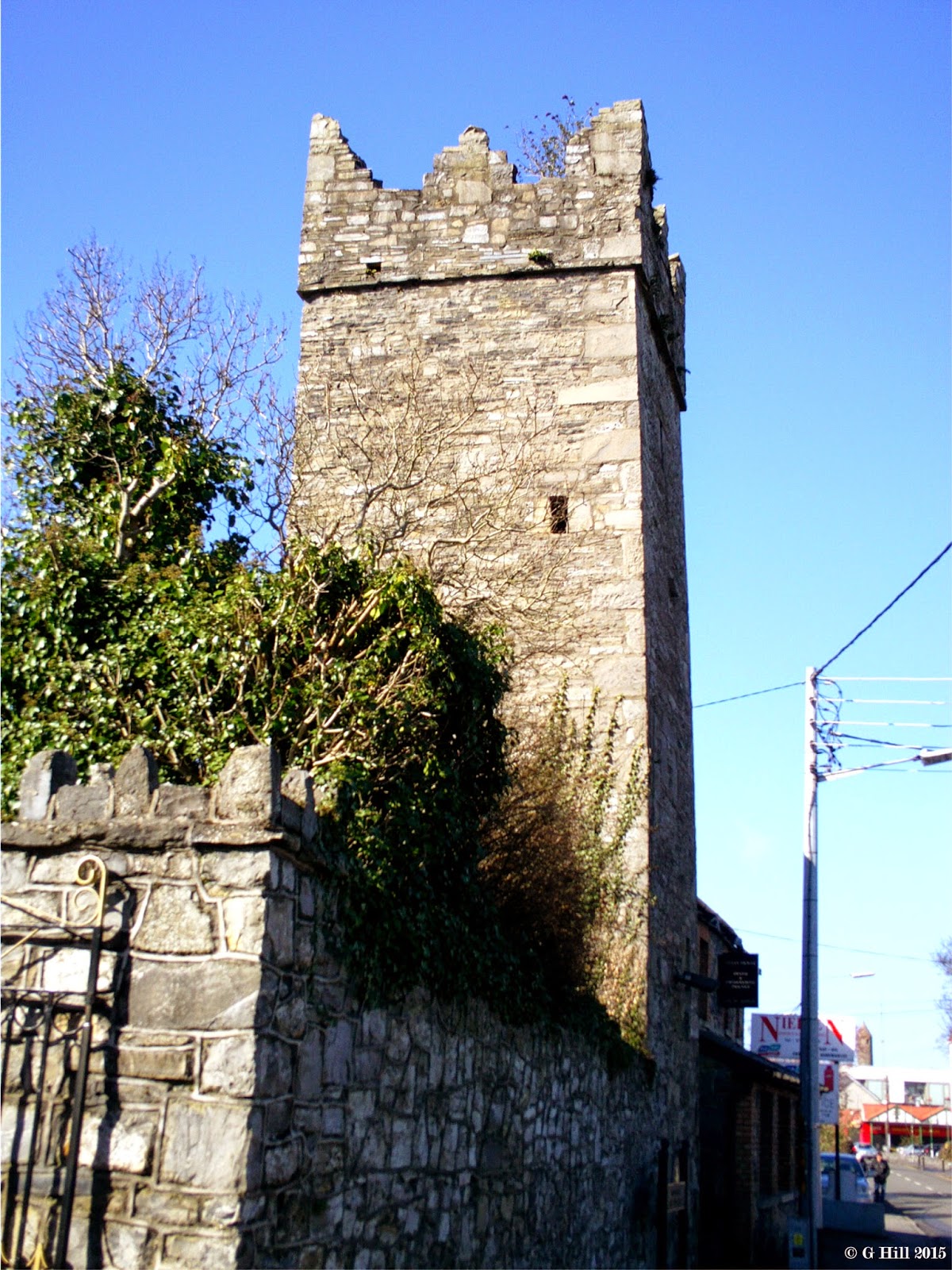 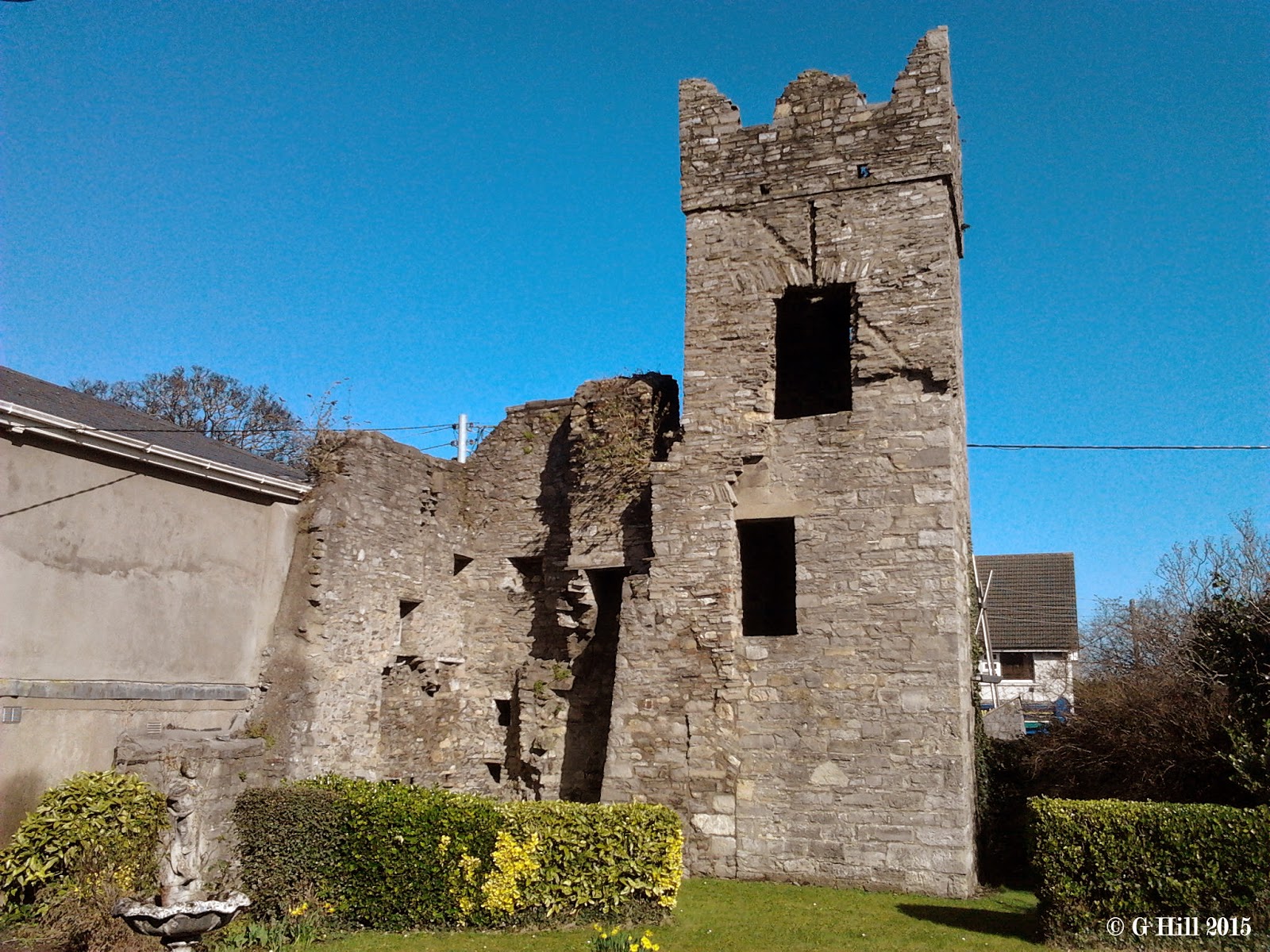 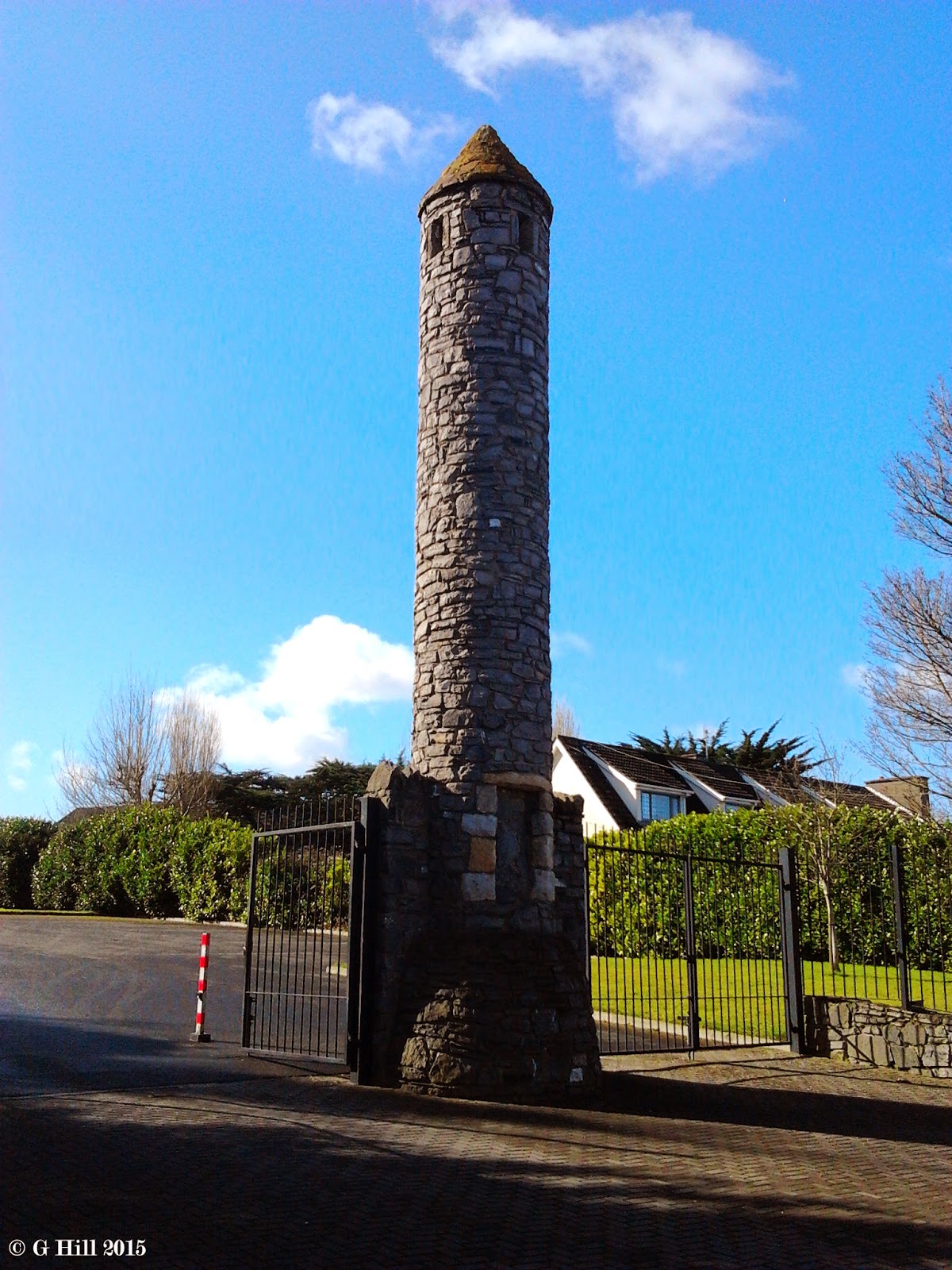 Above Image: The replica tower on Monastery Rd


A monastery at Clondalkin was founded in the 7th century by St Mochua and it grew into a very sizable site over the subsequent years. The tall round tower, one of the finest examples in the country, is believed to date to the late 8th century or early 9th century and is a testament to time still retaining its conical cap intact. The site was ransacked many times notably by the Vikings in which the tower no doubt played an important part in defence for the clergy. Today unfortunately nothing remains of any of the other monastic buildings.
The tower stands over 90 feet tall and has four windows at its top which mirror the points of the compass. A couple of years ago the tower was opened to the public one Saturday but otherwise it remains squarely locked up. Its iconic stance dominates the village and is close to a narrow but very busy road. It is best viewed from the grounds of the Anglican Church of St John across the road where a wall impedes the view of the noisy traffic. Indeed St John's was built in 1787 and stands on the site of the former medieval church (circa 13th century) which was demolished to allow the construction of the new church. However a tall 12 foot sliver remains and is possibly part of the chancel of the old church. It is now a national monument and a very striking feature in the Churchyard.
I went to photograph the tower one Friday morning and was aware that St John's church grounds contained the remains of the medieval church but I did not expect to find the gates open which they were and so the visit became all the more interesting. Within the grounds of St john’s it remains quiet and peaceful and I remained undisturbed during my visit. At the rear of the church are some remnants of the old monastic times. There are two stone crosses. The smallest depicts both a ringed and a Latin cross on its faces while the larger granite cross which may have originally been a boundary or grave marker stands proudly a few yards apart from the smaller cross. Along the boundary to the right of the new Church is a large granite baptismal font which may date back to the original monastic times. Again it is very impressive and I find the manner in which all of these items have been preserved and placed a credit to those involved in doing so.
Nearby on Monastery Road are the remains of what is thought to be a 16th century Castle. Locally called Tully’s castle as this was the name of a previous owner it has been mentioned in records as being Clondalkin Castle. The remains consist of a tall narrow tower and part of an adjoining building on its North West side. There are two door like apertures on its Southern West side. The ruins now form part of the garden wall of a modern house. The tower may have been part of a number of castles built to protect the pale but seems too narrow to have been a residential tower so it would lead one to suspect it might be an ancillary tower to a much larger non-extant castle.

To find the ruins take the R113 (Fonthill Rd) heading Northwards from Newland's Cross on the N7. Drive for approx. 500m until you reach a crossroads with Boot Rd. Turn right here and drive for approx. 800m, you can’t miss the tower ahead of you. For parking your best bet is to continue on past the tower and park in the Mill shopping centre a little way further on the left. Parking is free and only a 3 minute walk back to the tower. Be sure to check if the gate to St Johns opposite is open so you can view the other antiquities. The best time for access would probably be a Sunday morning when service is held at 11.15am. To find Tully’s Castle leave the car park at the mill centre and go straight through the traffic lights to the road directly opposite. Follow this curved road until you reach a set of lights at the Village café. At this junction turn left and drive approx. 200m and you will spot the Castle on your right. You can park at the shops opposite.
As an interesting aside about 400m east of Tully’s Castle on the same road is a replica of the round tower at the entrance to a large car park. Worth a look for the heck of it.