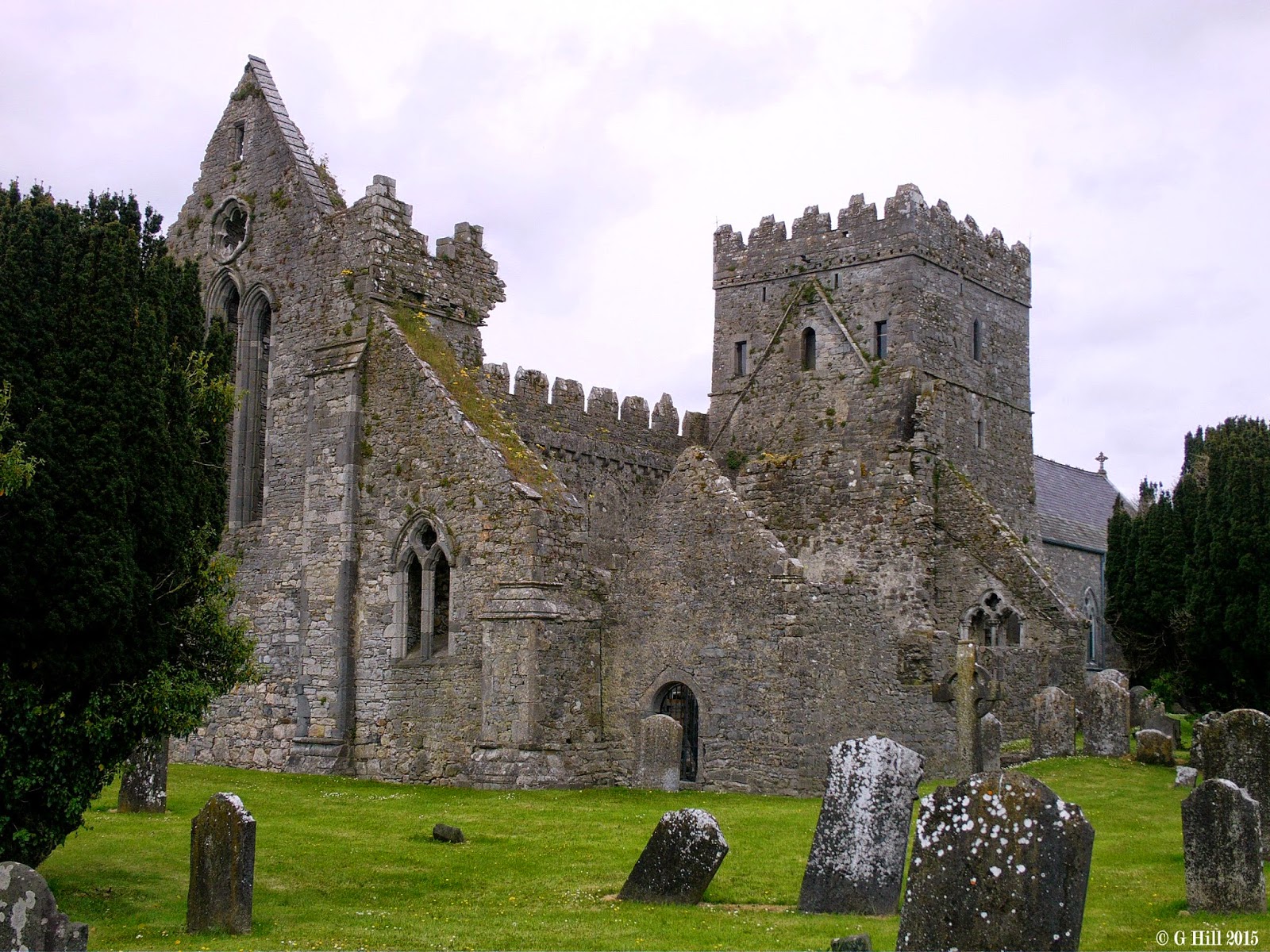 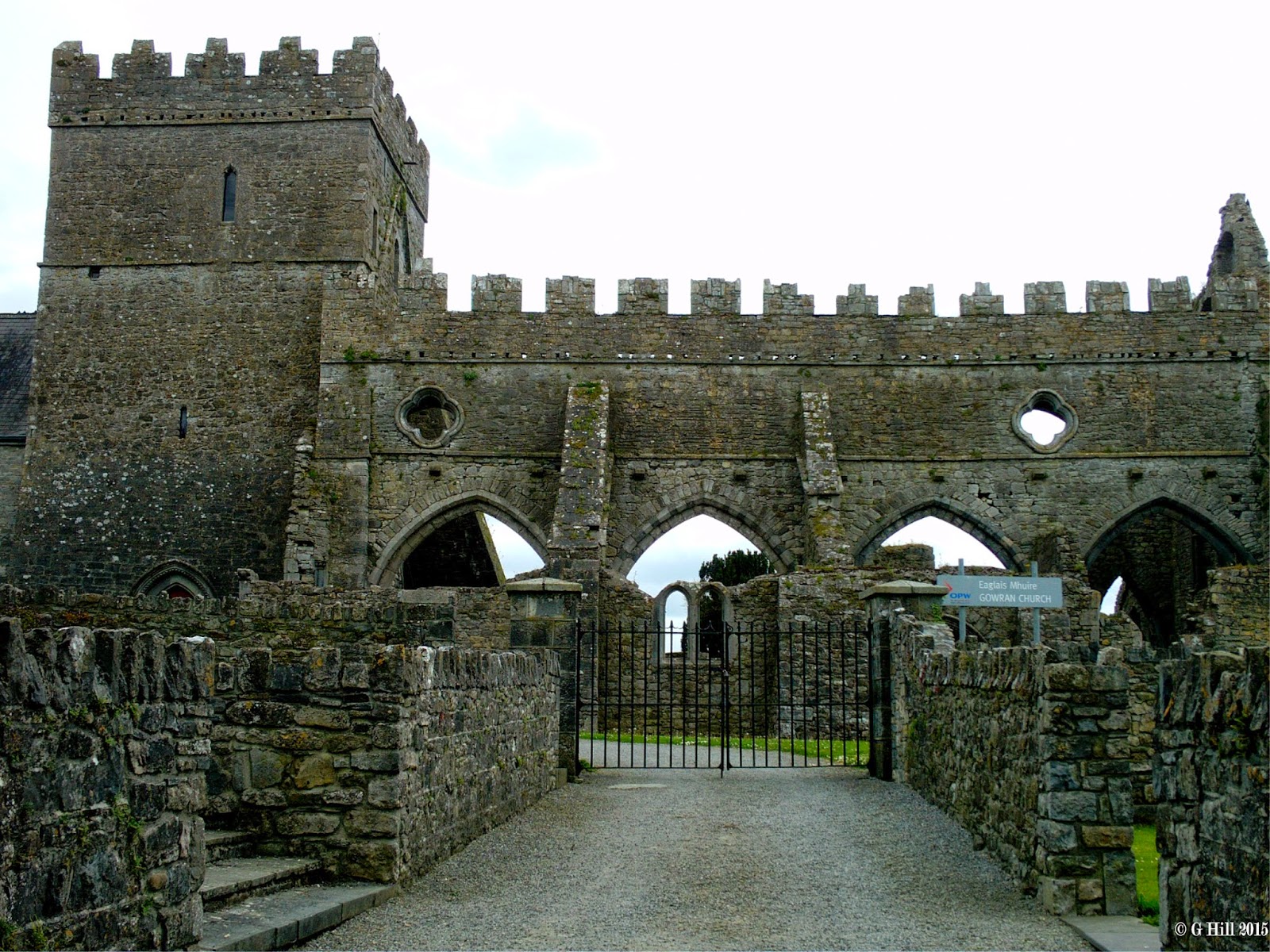 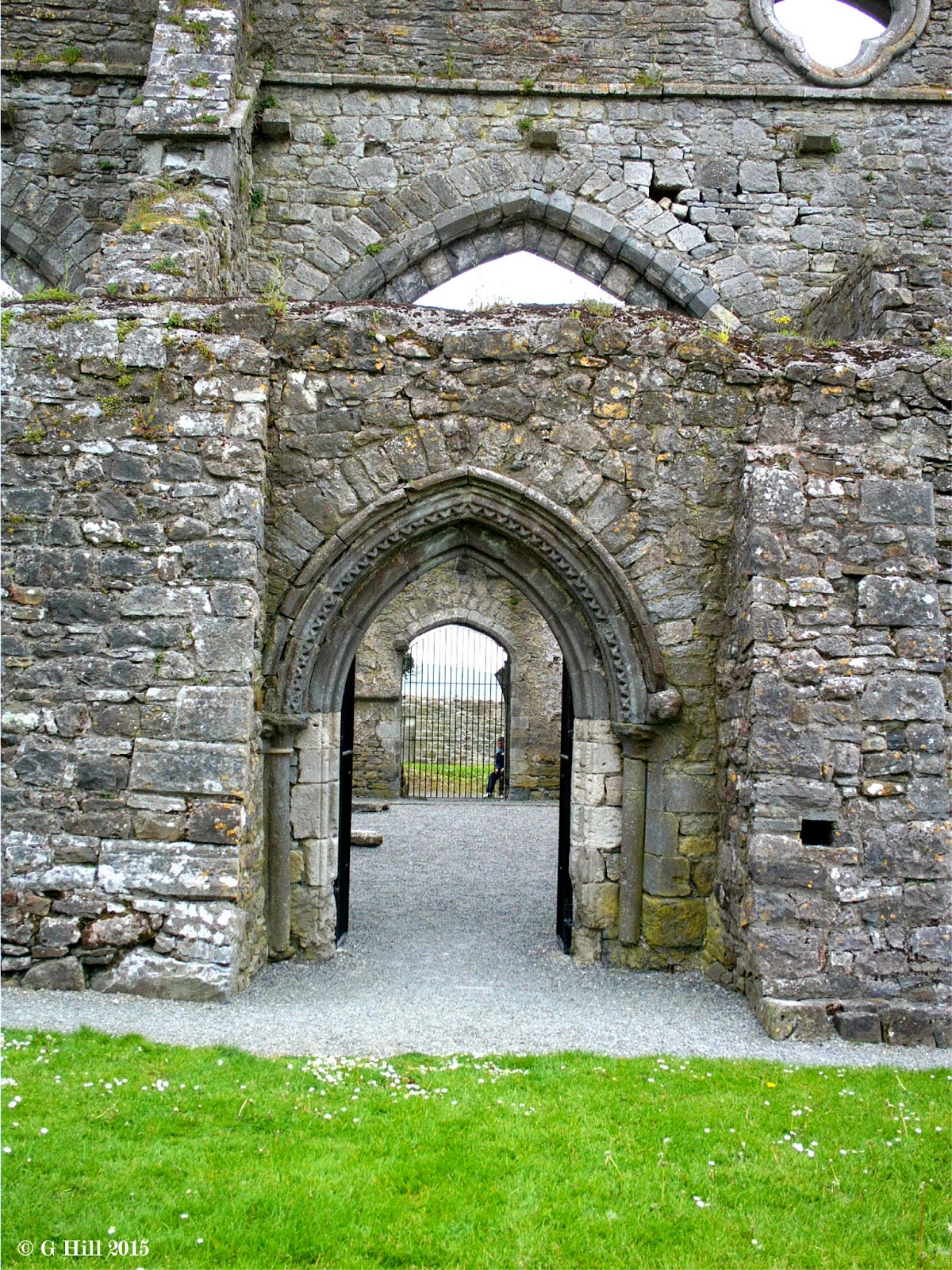 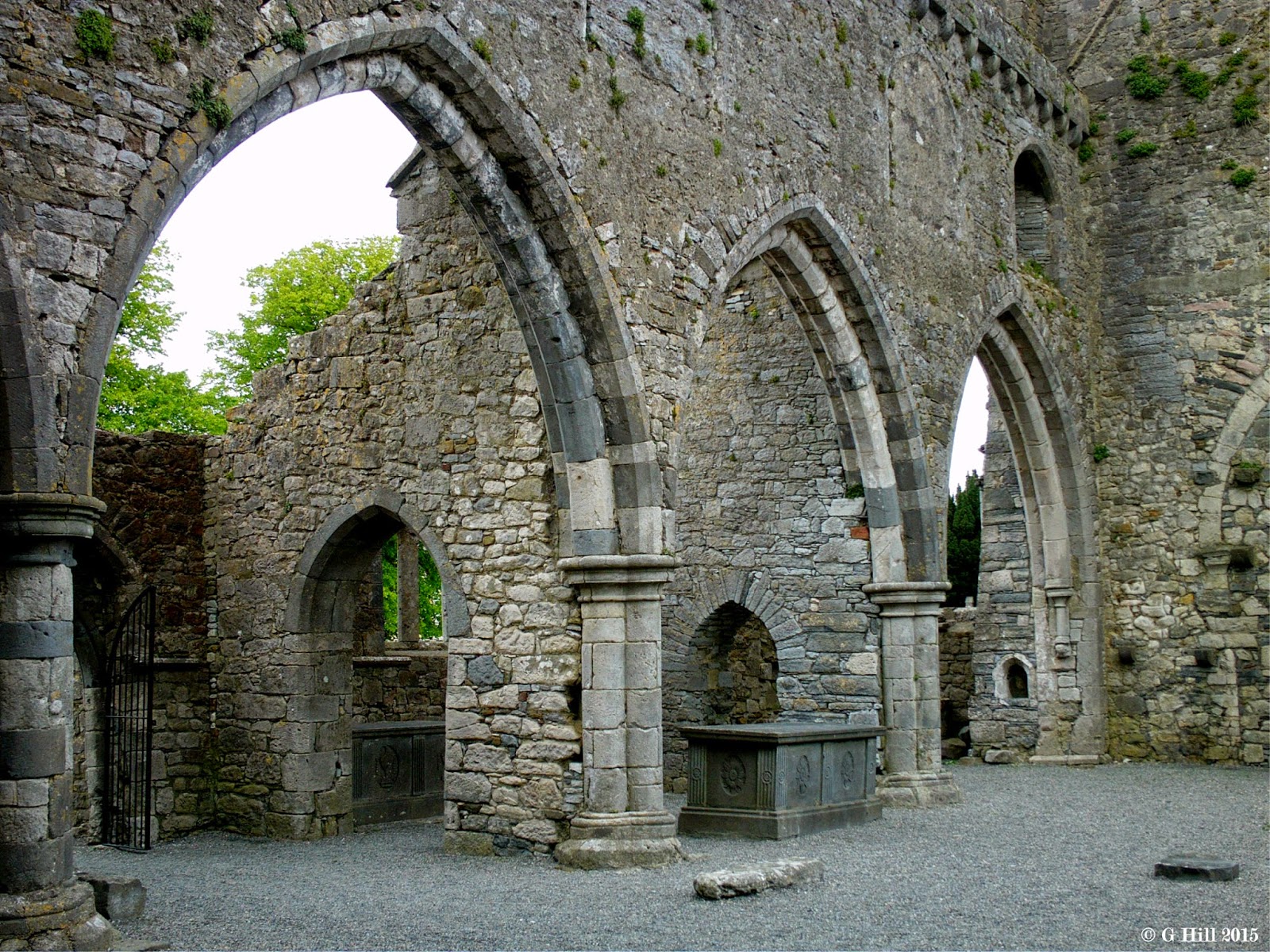 Above Image: The graceful arches 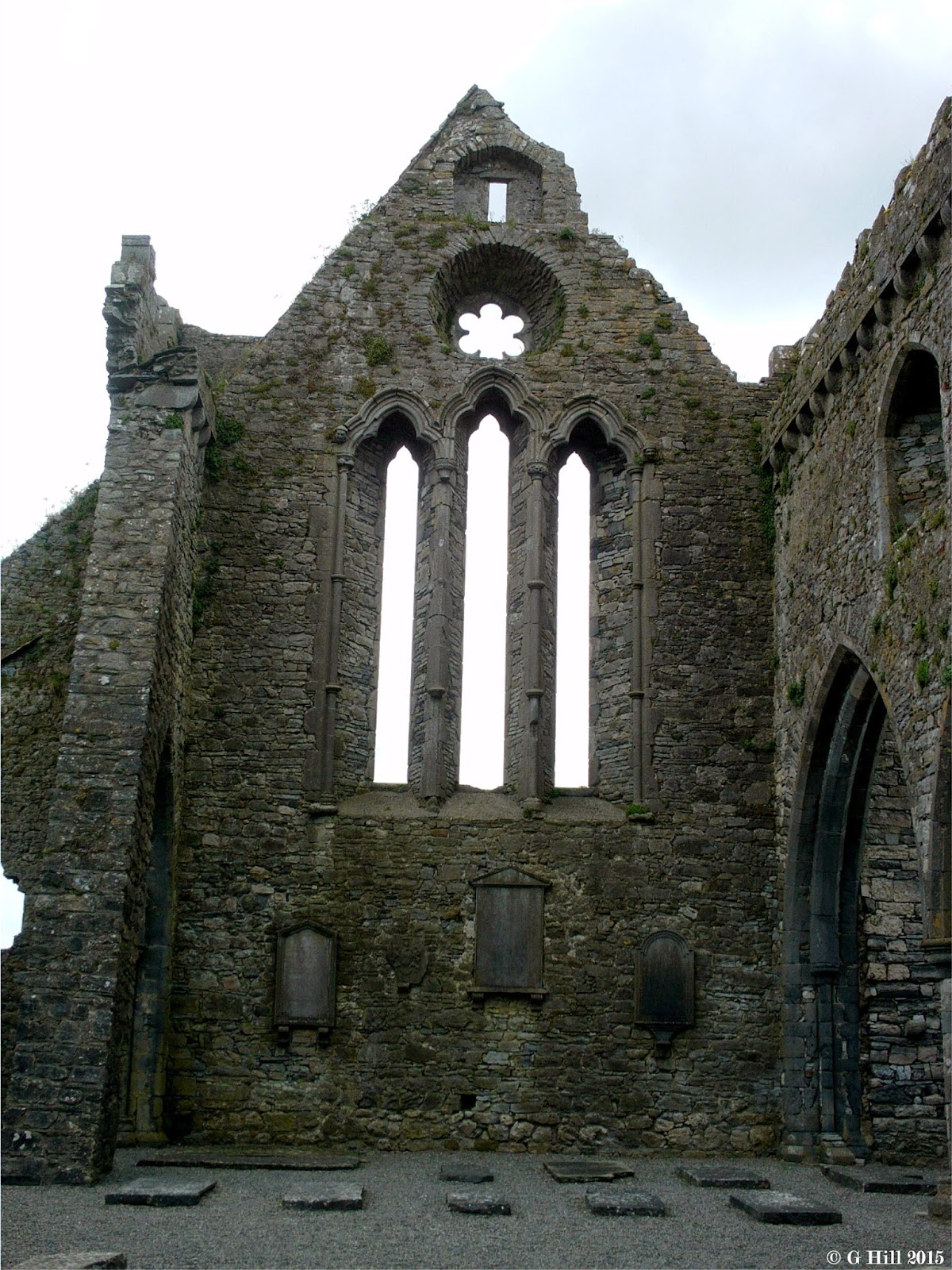 Above Image: The West gable (Interior) 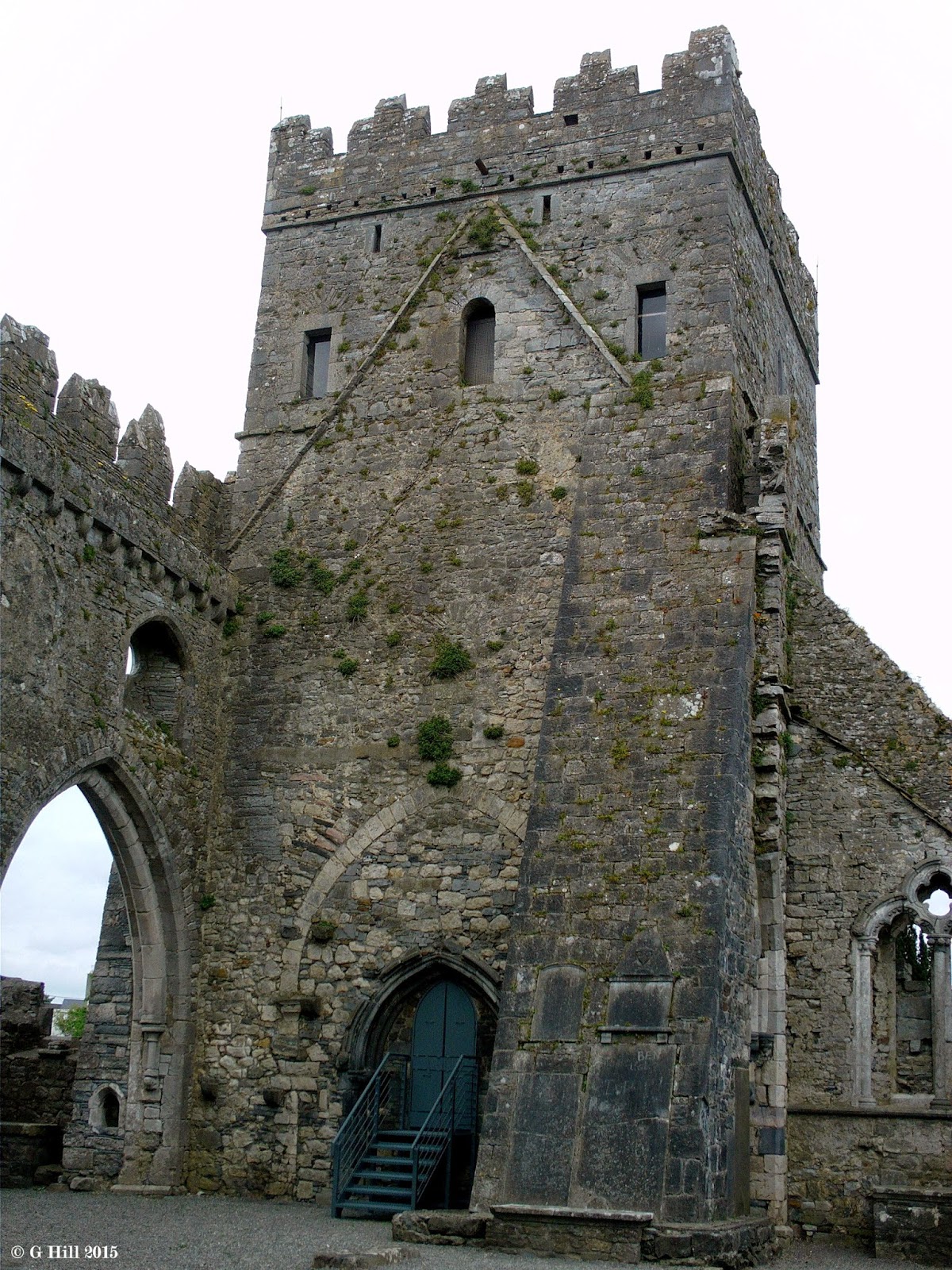 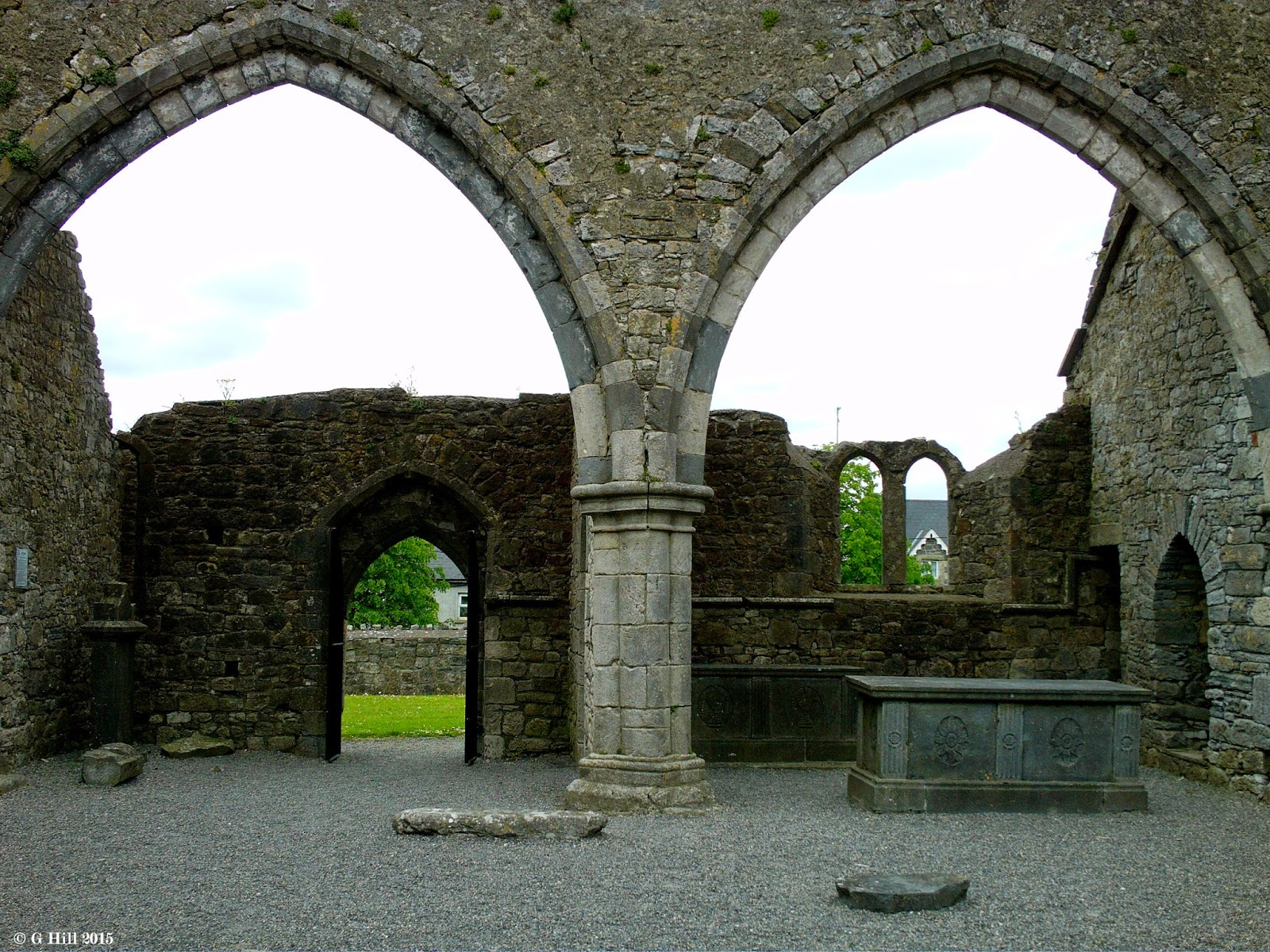 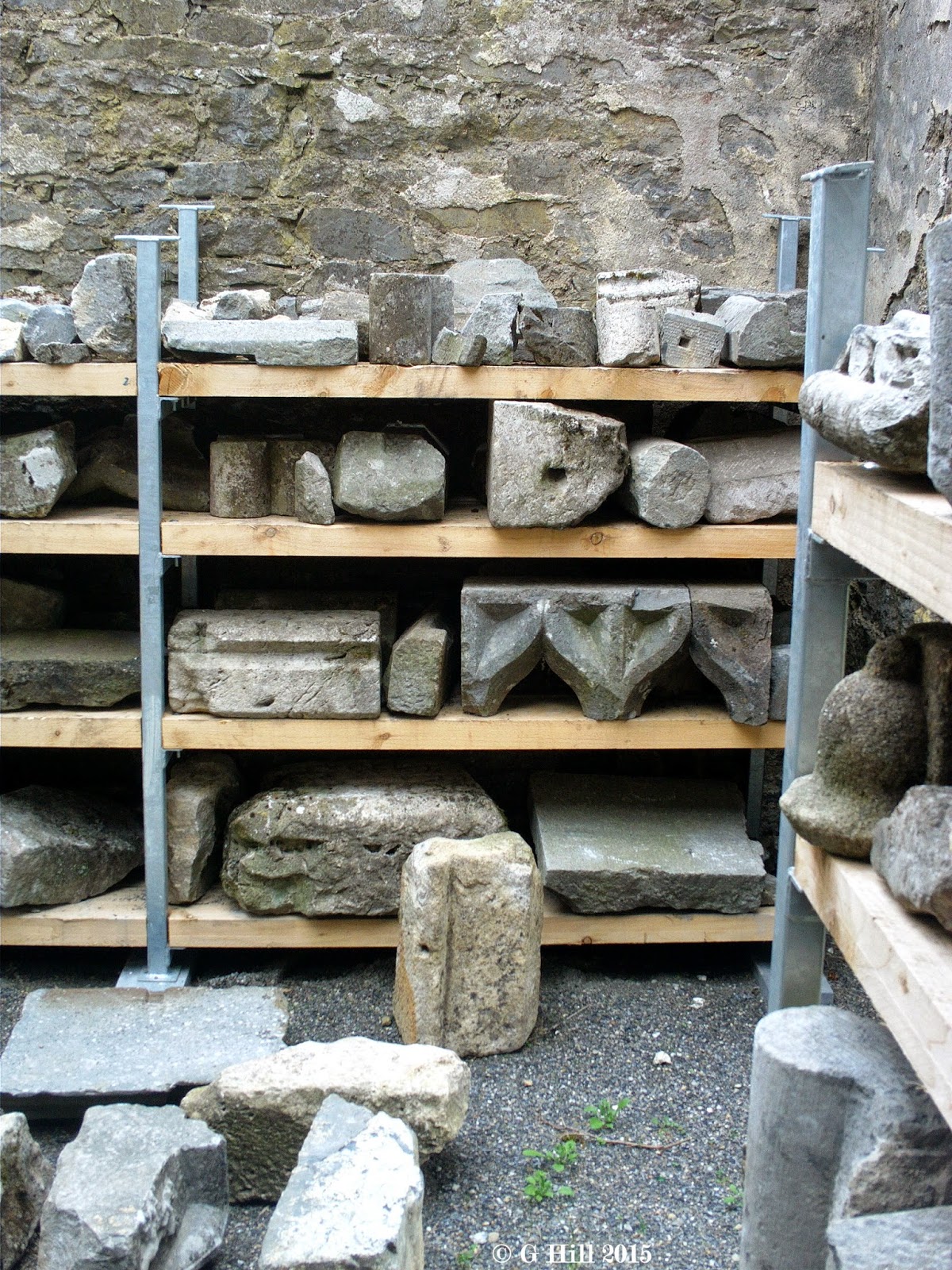 Above image: Some artefacts from the ruins 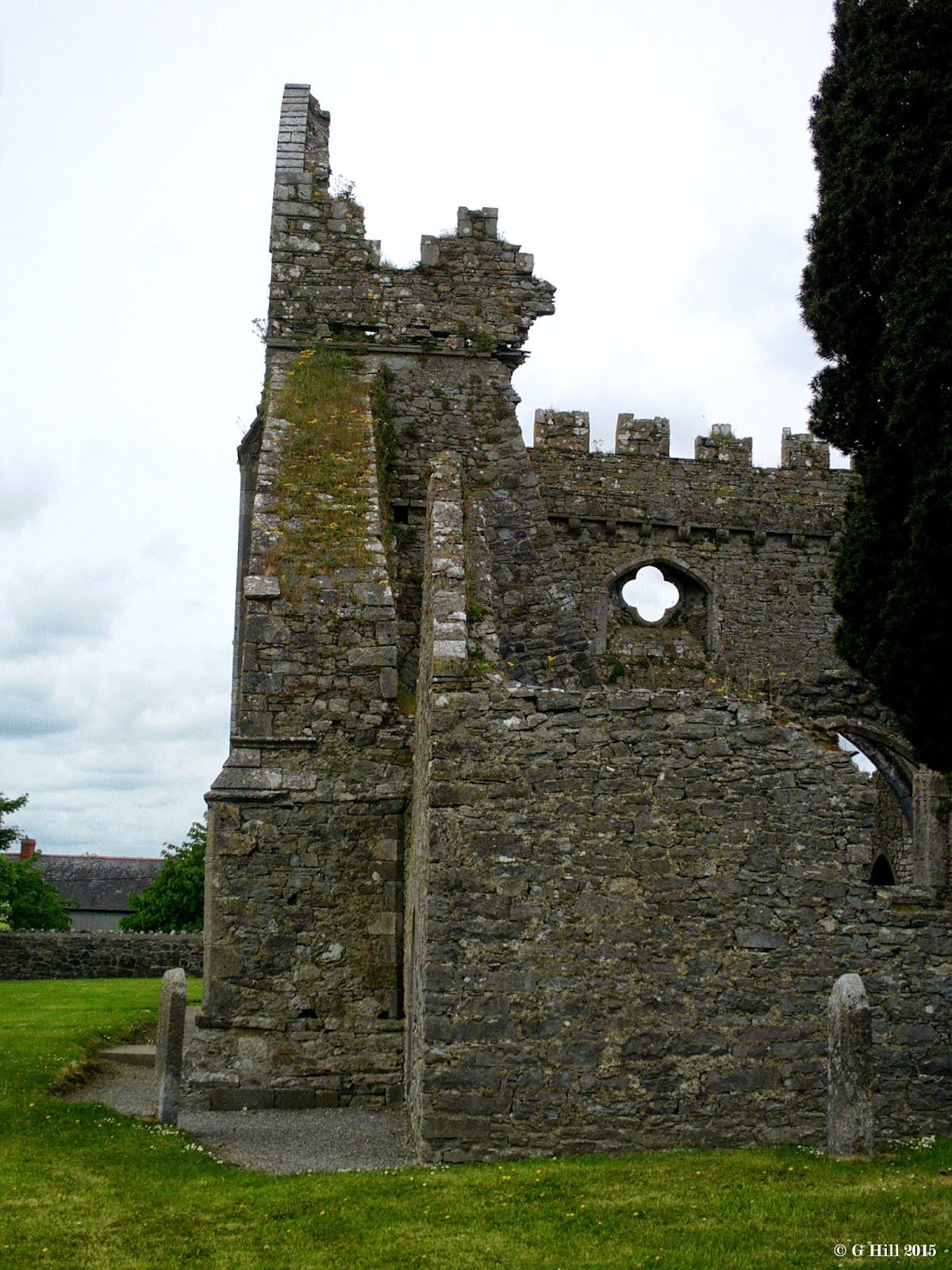 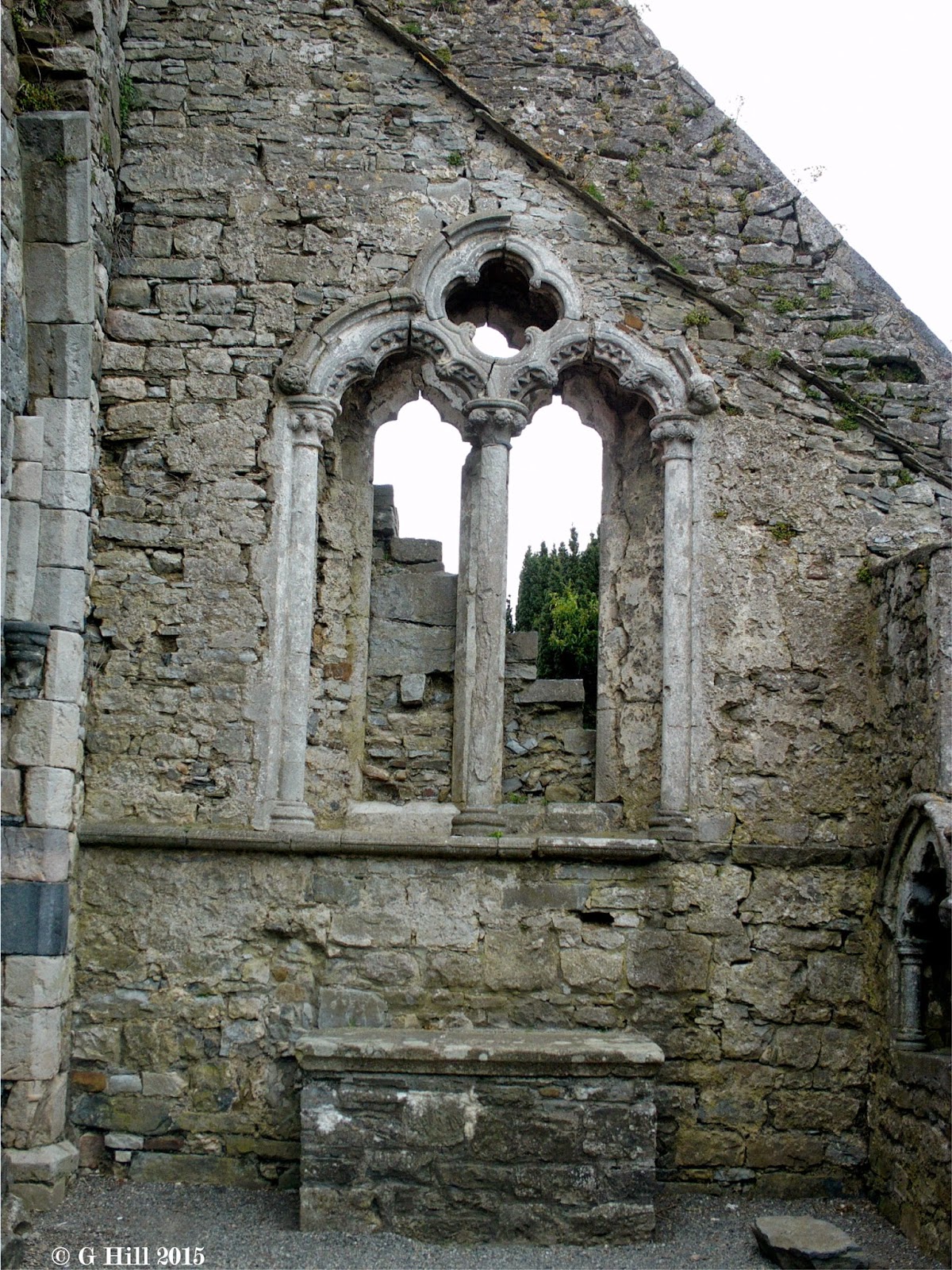 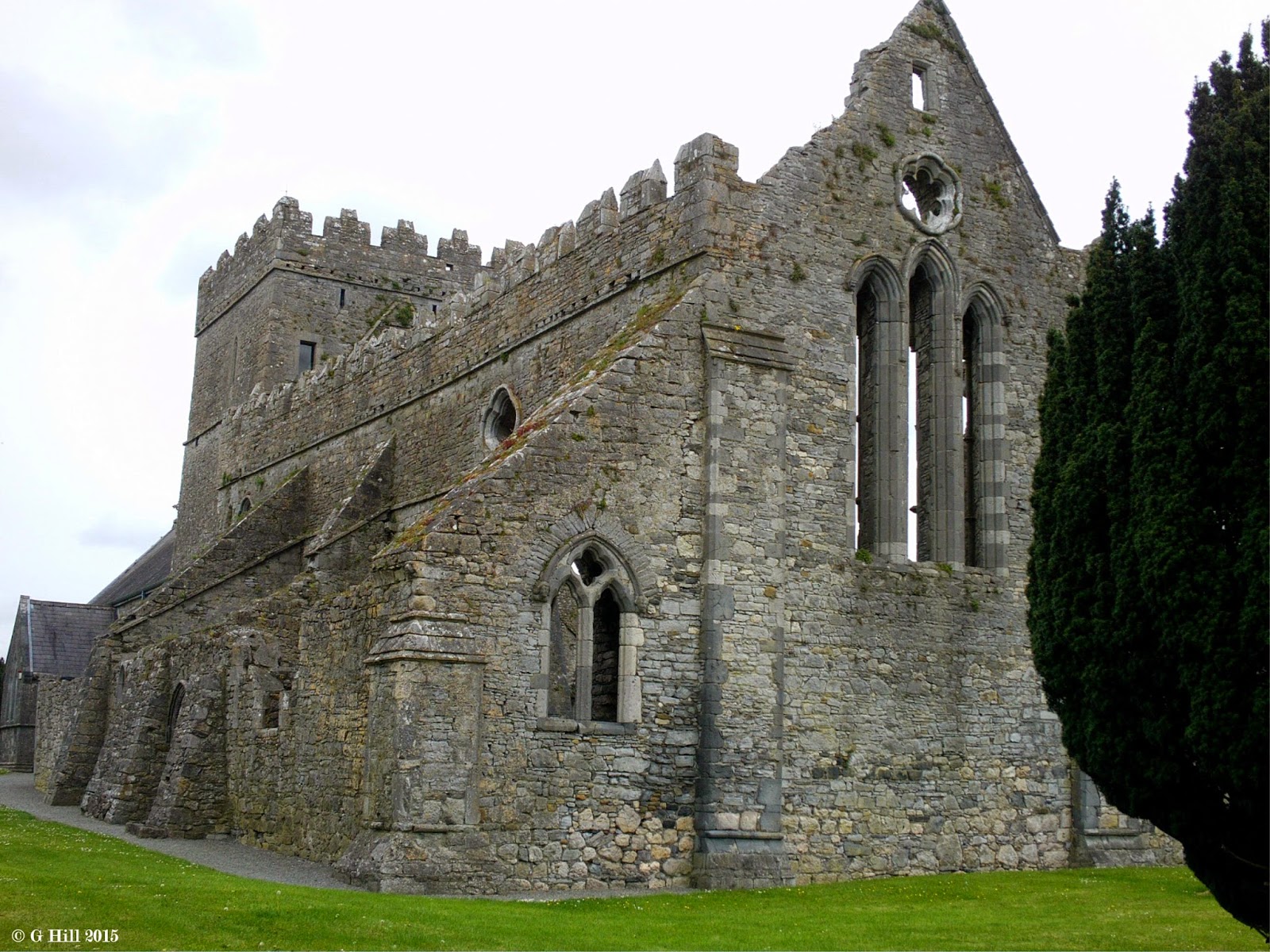 Above Image: The West gable (Exterior) 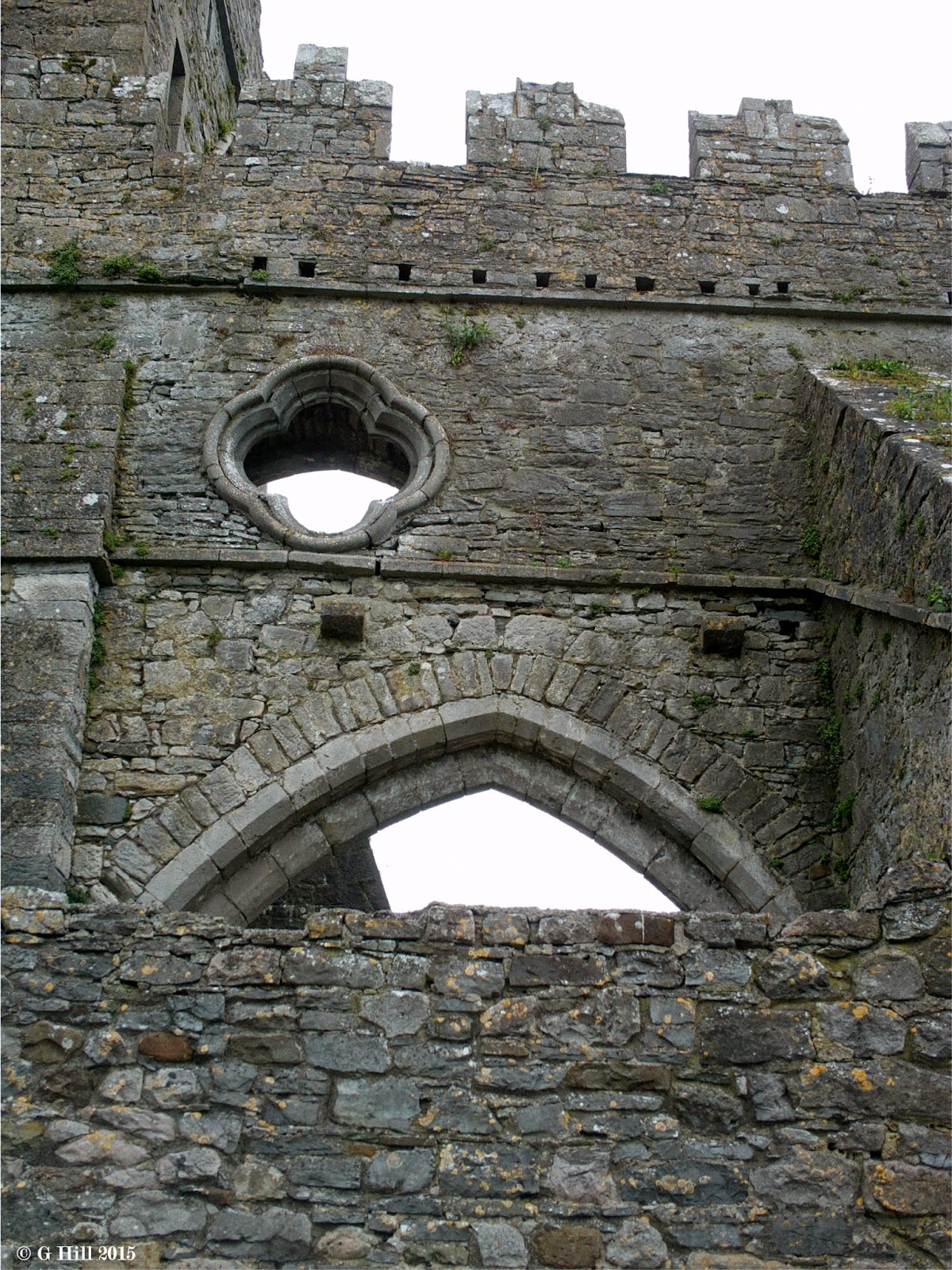 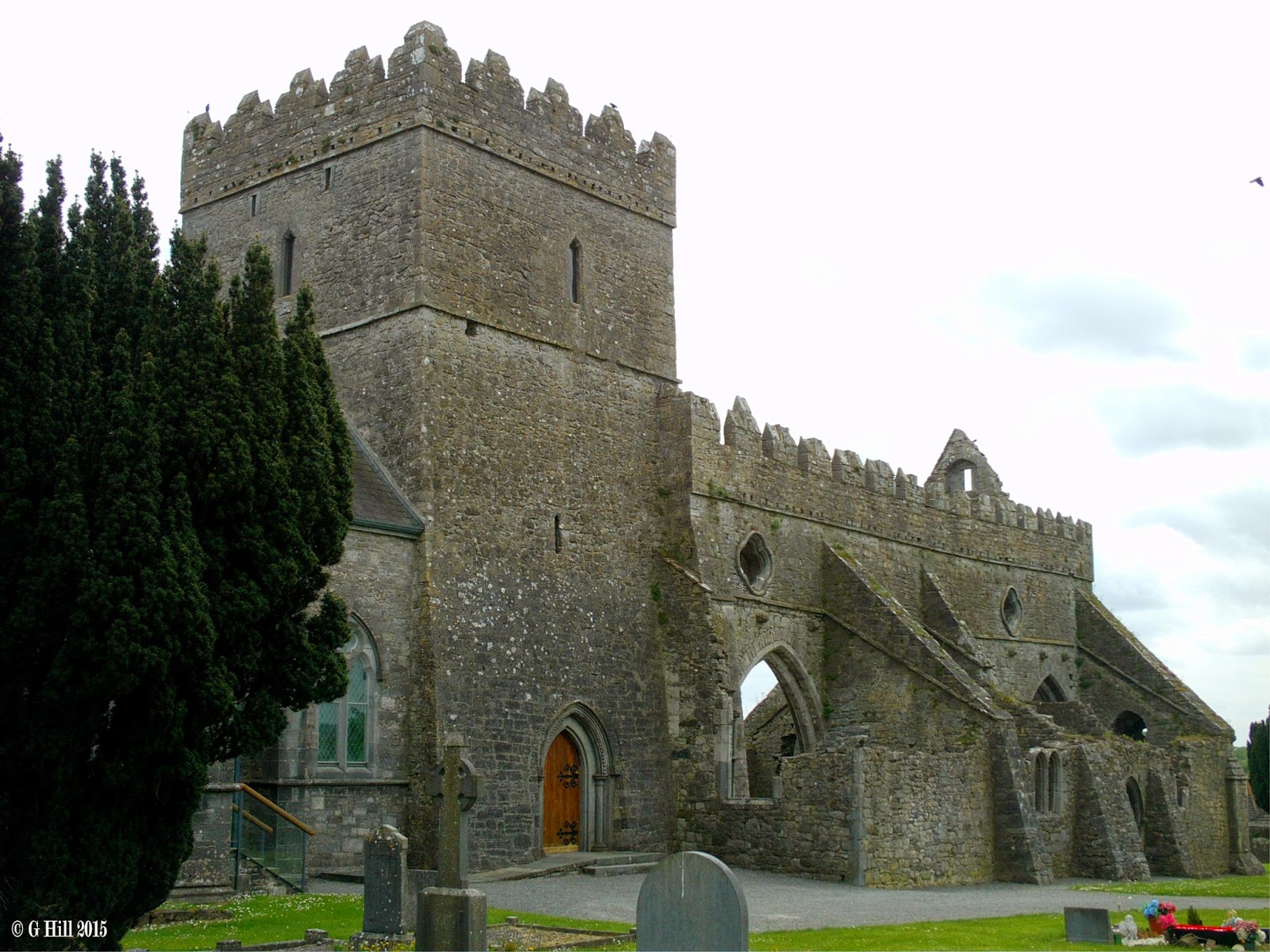 The huge Gowran collegiate Church was constructed in 1260AD on the site of an earlier monastery. It was administered by a college of priests rather than being run like a traditional monastery
Is it a ruin or is it not? Good question. It is really a tale of two Churches.The structure is now divided into two distinct sections. One section is in ruins the other in use. The original chancel and nave were expanded in the 14th century by the addition of the large tower and battlements .The Church fell into ruin after the dissolution but the chancel end was rebuilt upon in the 19th century incorporating the tower and thus creating a new Church of Ireland parish Church of St Marys which is still in use today.
We came across the Church by chance passing through Gowran, the large ruined section being the first thing we spotted. As mentioned the newer Eastern section is in use and the tower contains some very interesting effigies and tombstones but to me really the ruins outside are the more interesting to see.
You can access the ruins through a stile at the end of a walled lane way that leads up from the main street and then by way of a doorway in the south wall. There is some amazing stonework on this Church including the elaborate crenellations on the high North wall. There are many niches for tombs in the South wall and some interesting carved slabs and masks.
The aisle has arched arcades, the North one still intact. Standing in the nave the tower looms above you and is supported by a large buttress. I felt dwarfed walking around this impressive structure. The many arches and windows are a testament to the masons who constructed them.
Near the Western end of the nave is a tomb with a rather creepy shrouded figure upon it, this is the tomb of James Keally and his wives dated 1646.
A very impressive place then and well worth your time to stop and have a look around if in the area.
To find the ruins take the M9 heading South and take the junction 7 exit. At the top of the exit ramp take the first left on the roundabout and continue on straight through the next roundabout. At the third roundabout take the third exit on the right onto the R448. Drive for approx. 5.5KM until you reach the main street of Gowran. Continue up the main street and you can’t miss the tower of the church on your left. Parking is possible by the roadside at the church itself.
Posted by Castlehunter at 13:39