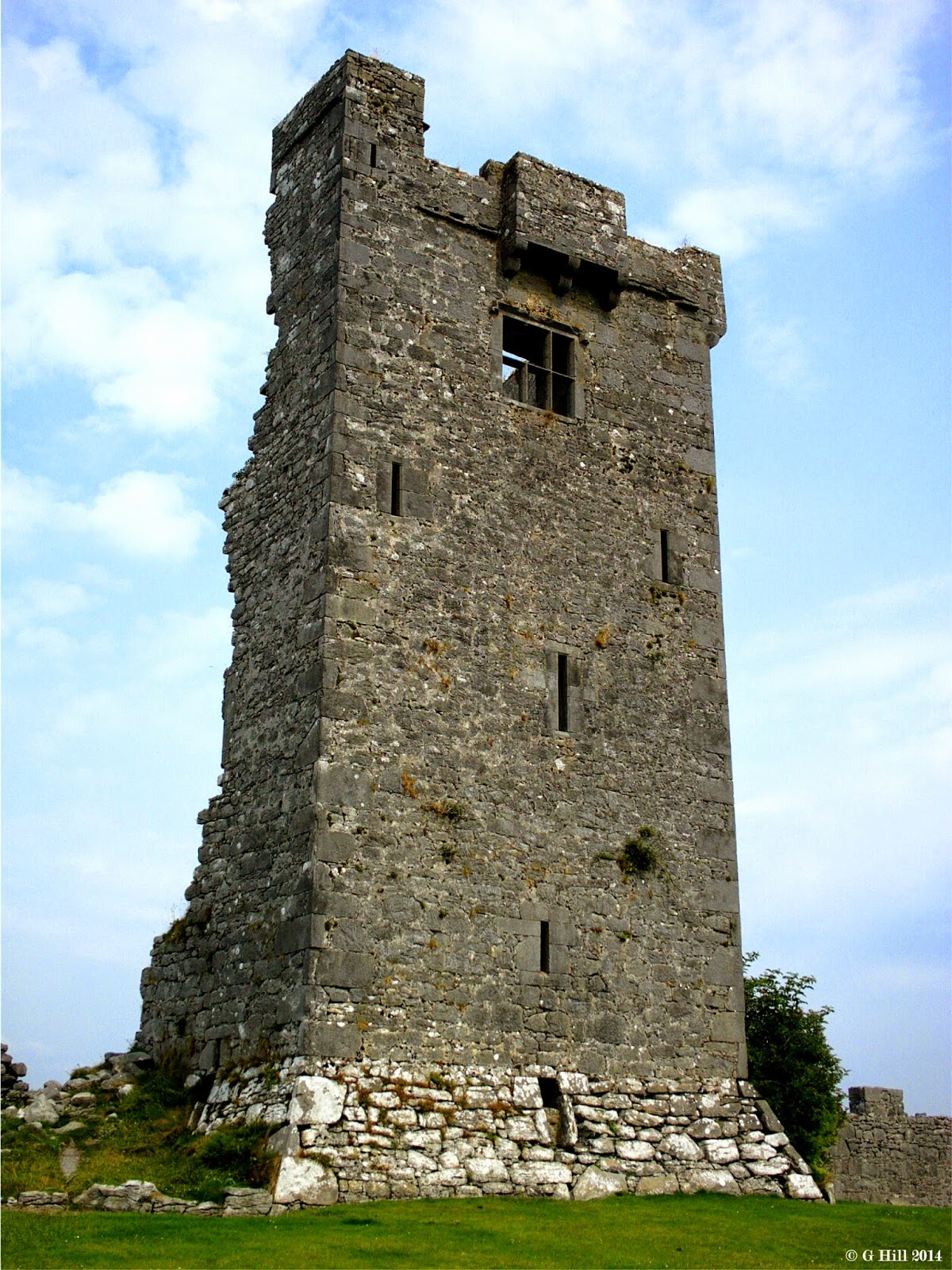 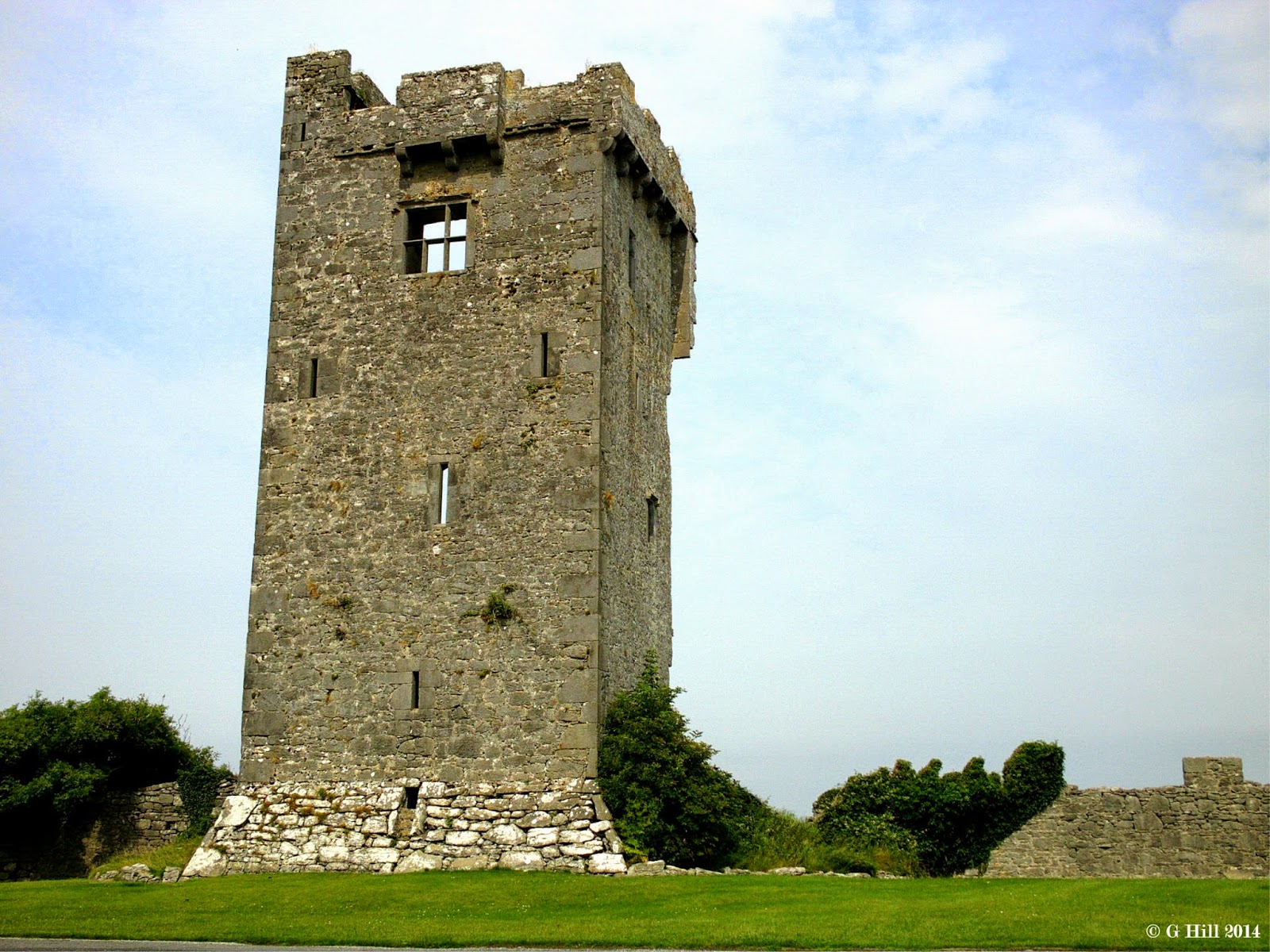 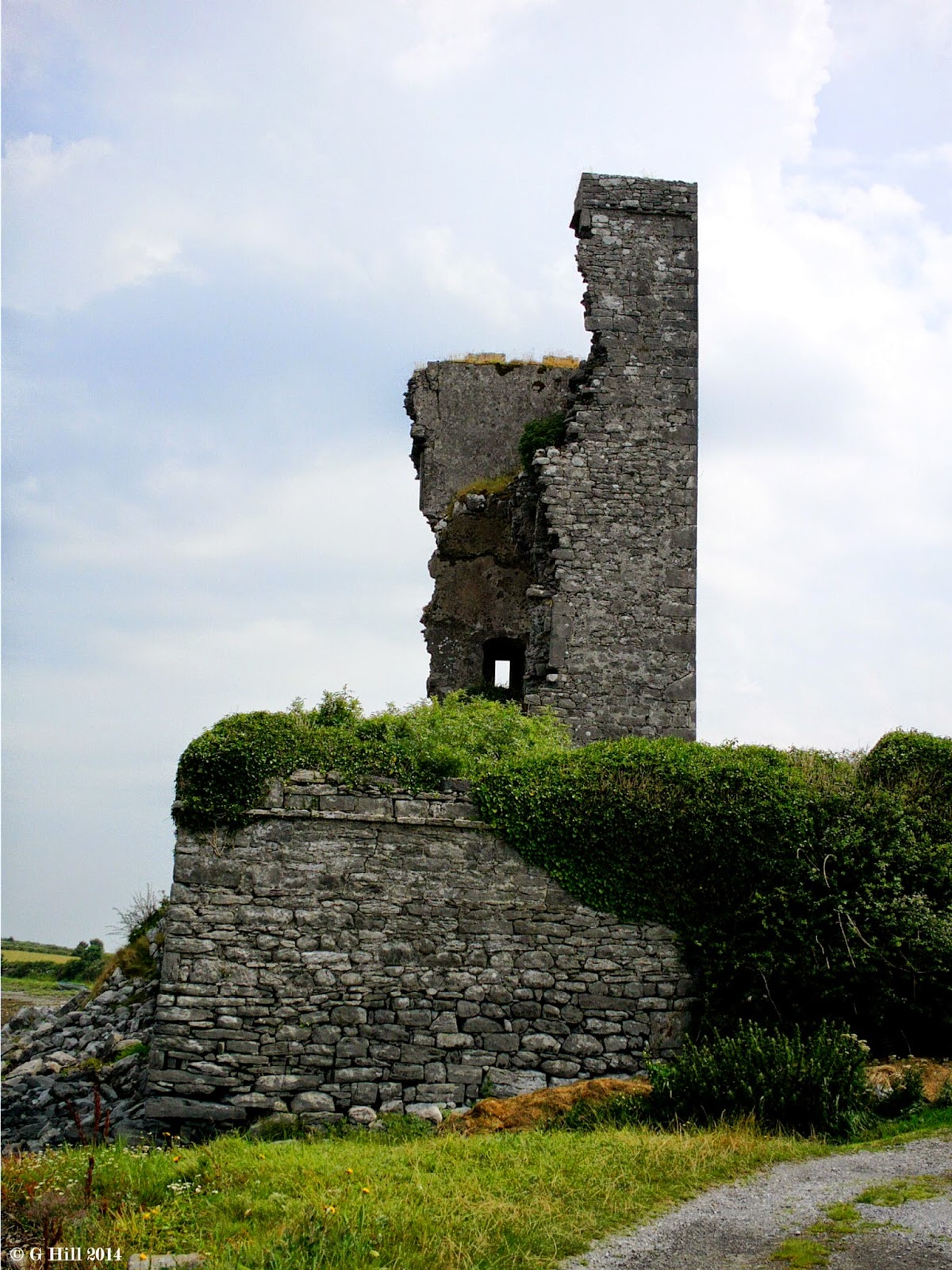 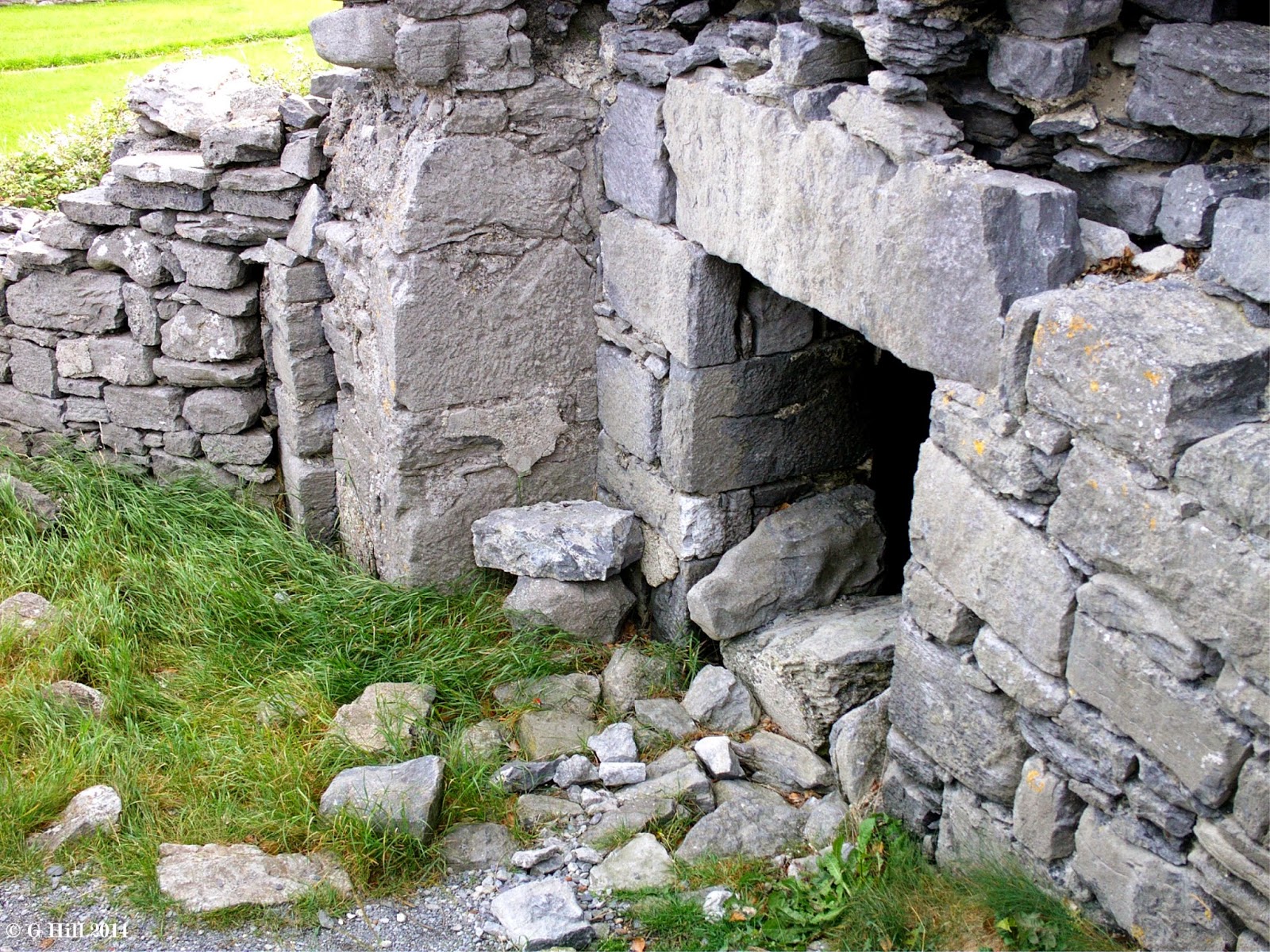 Above & Below Images: Semi-blocked entrance 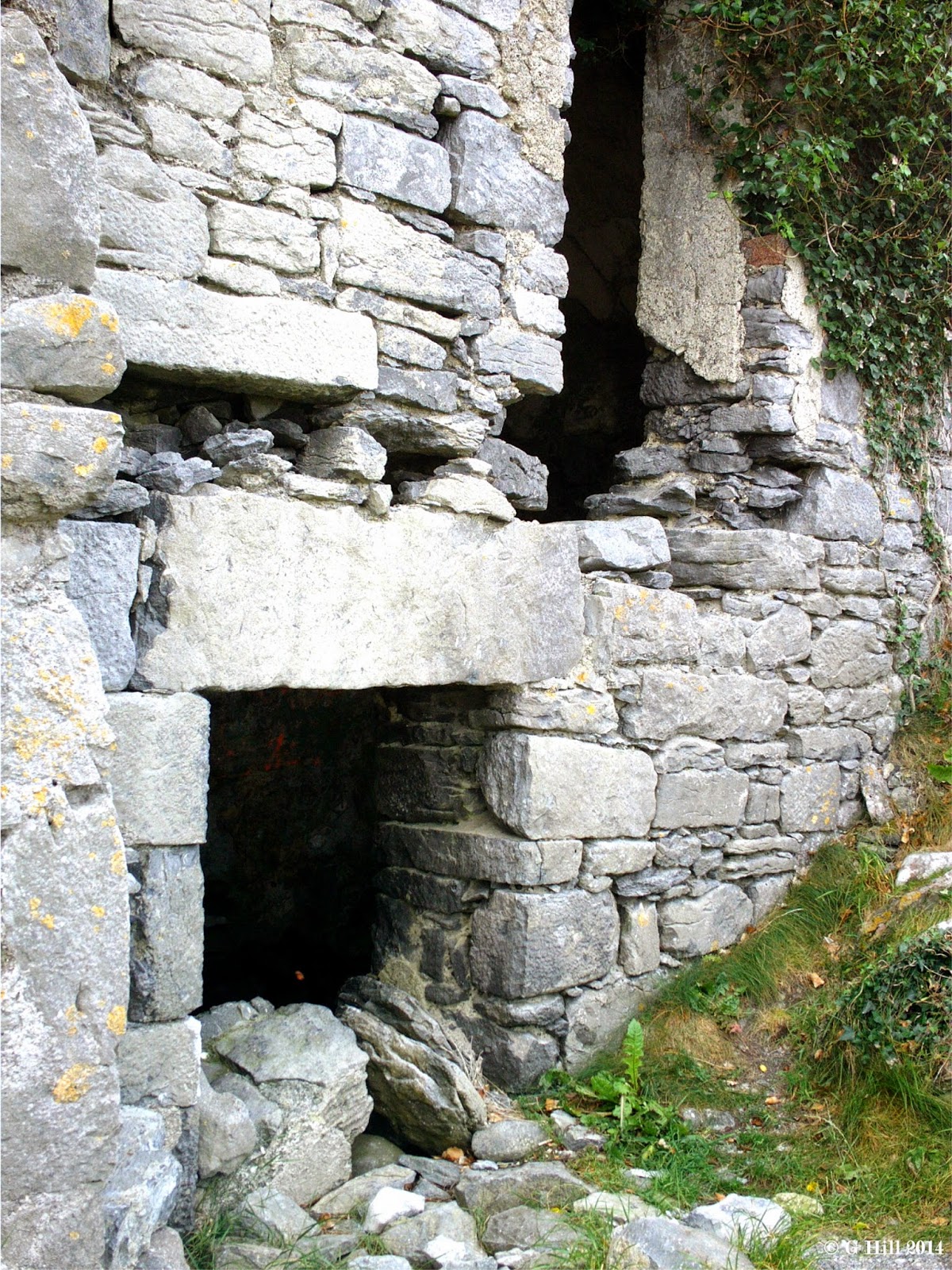 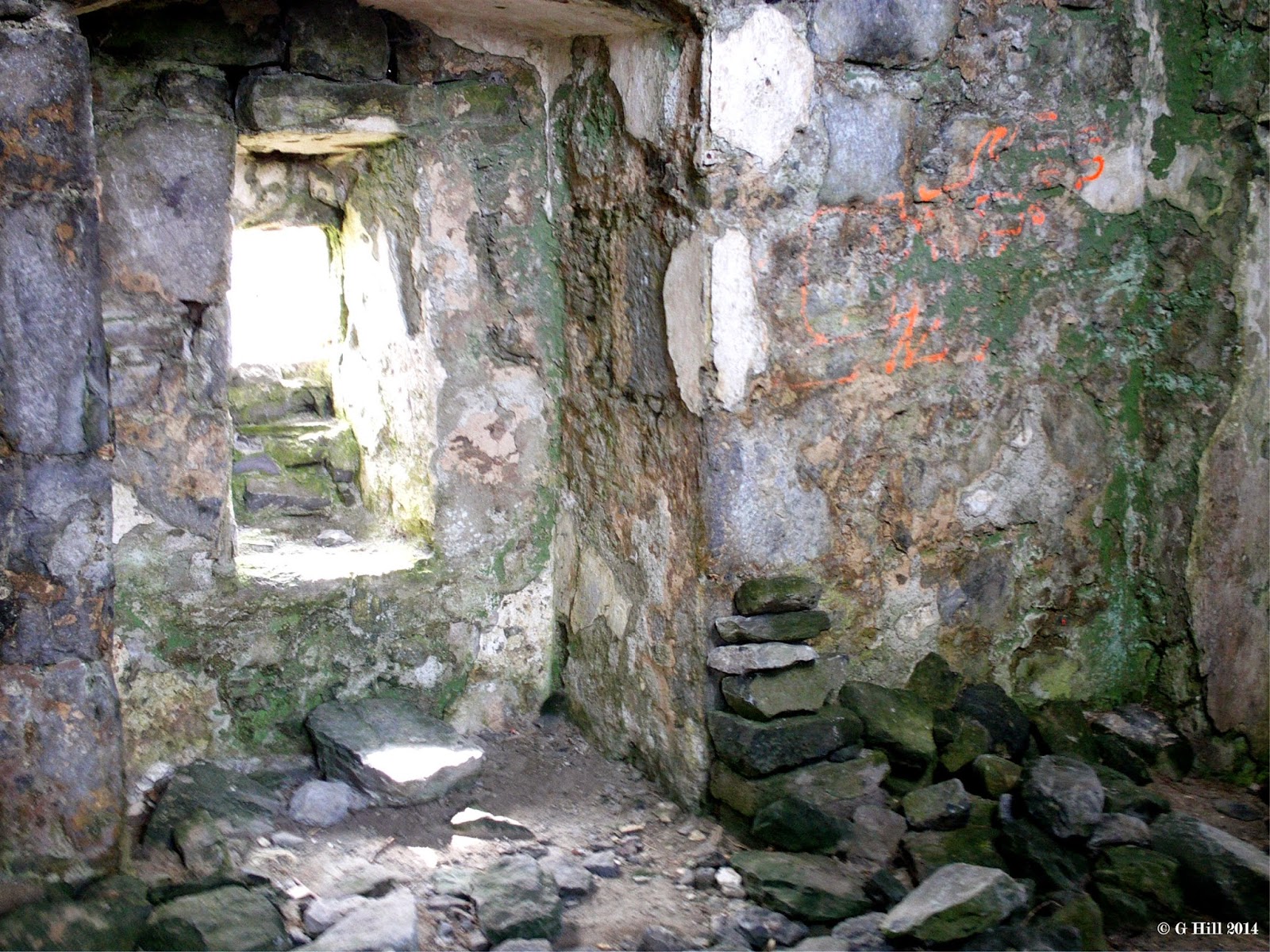 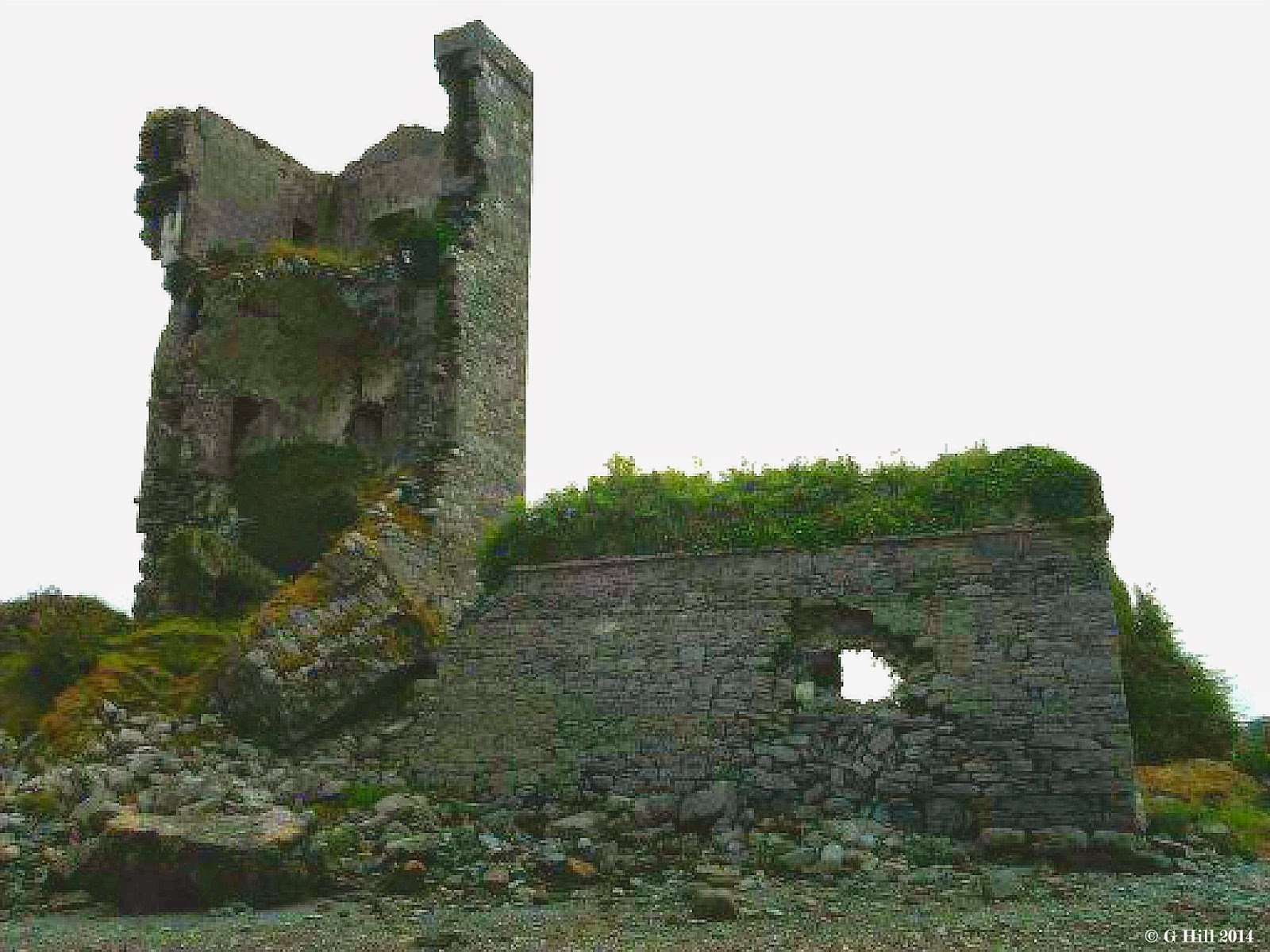 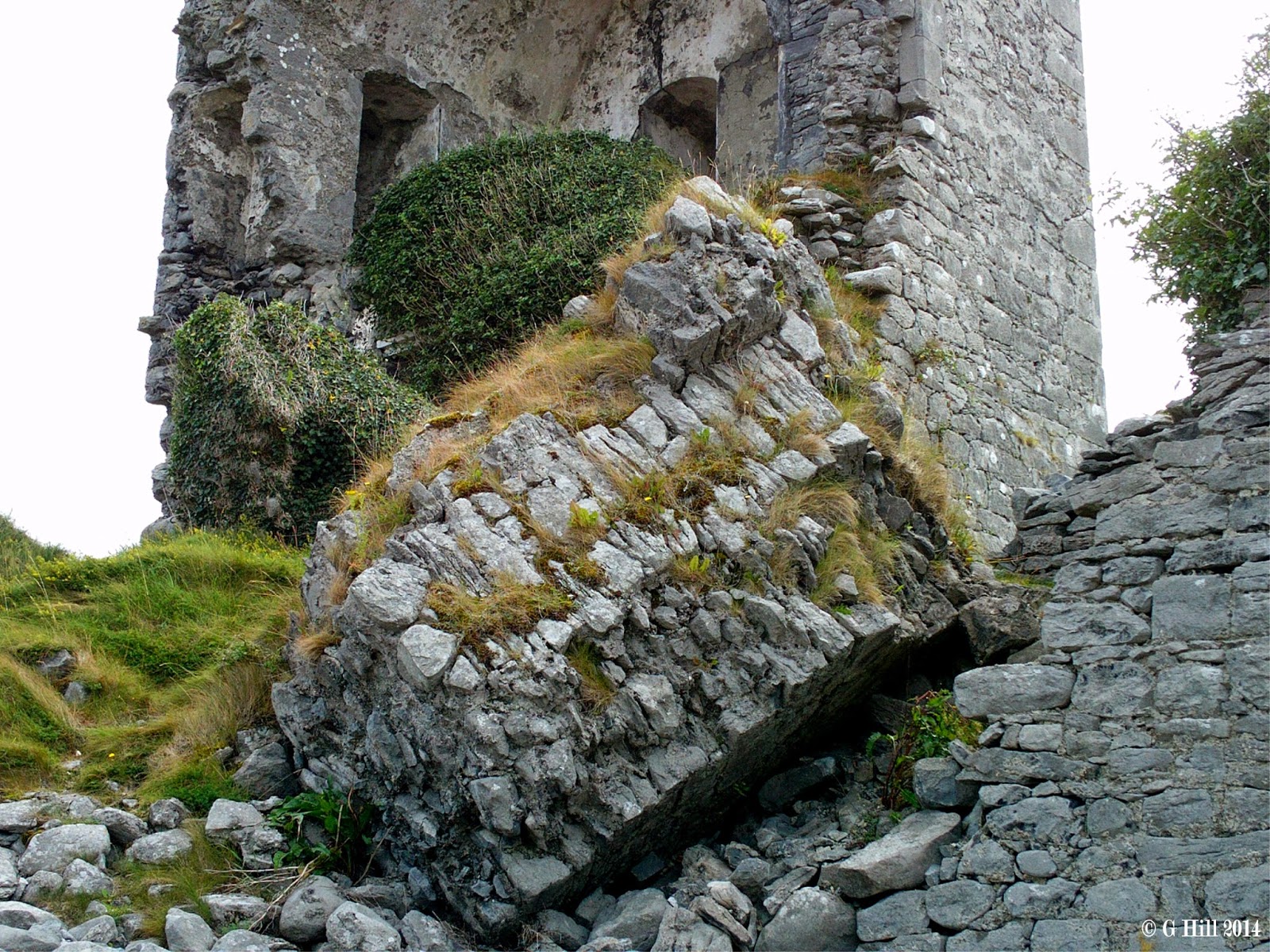 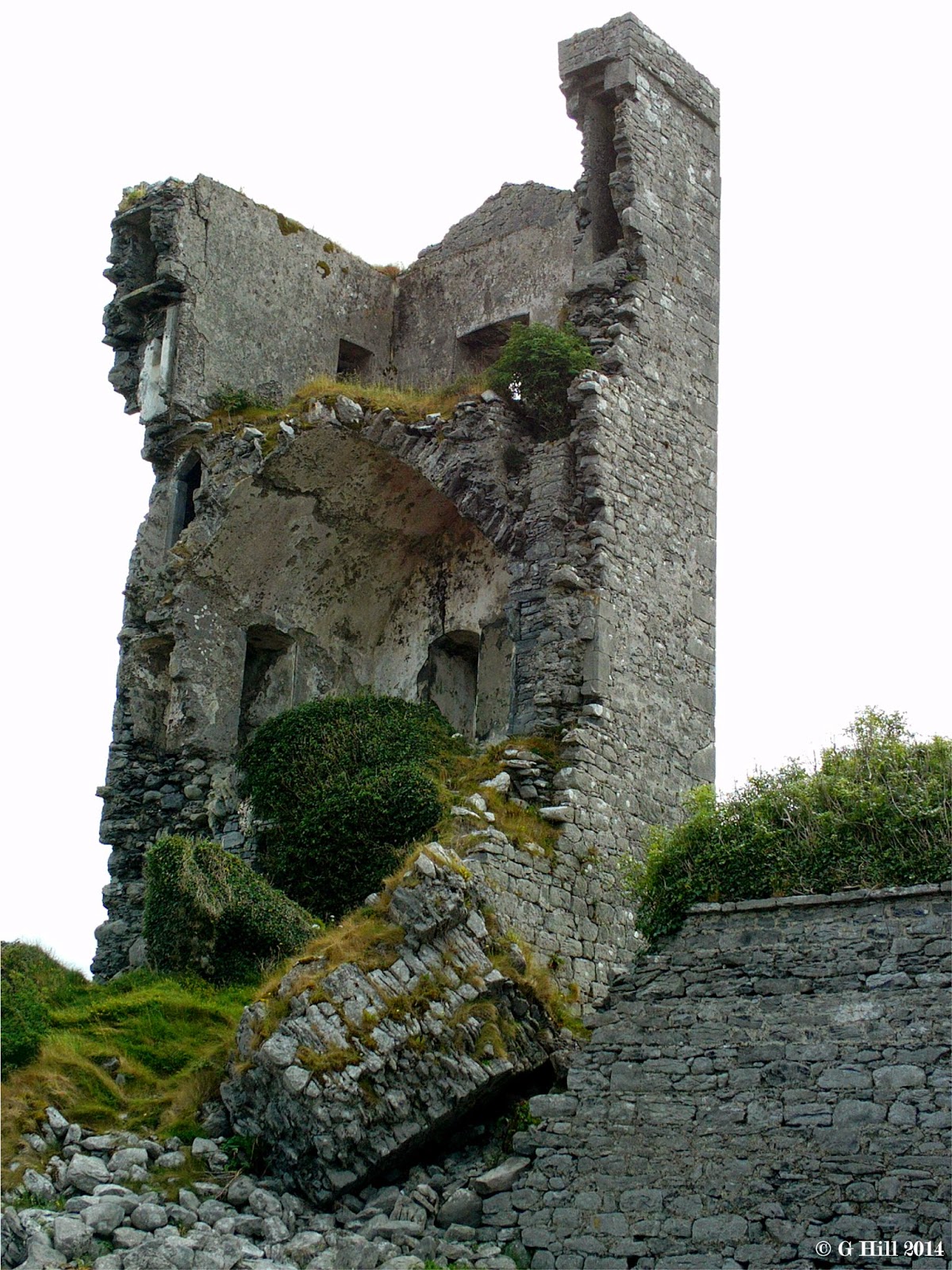 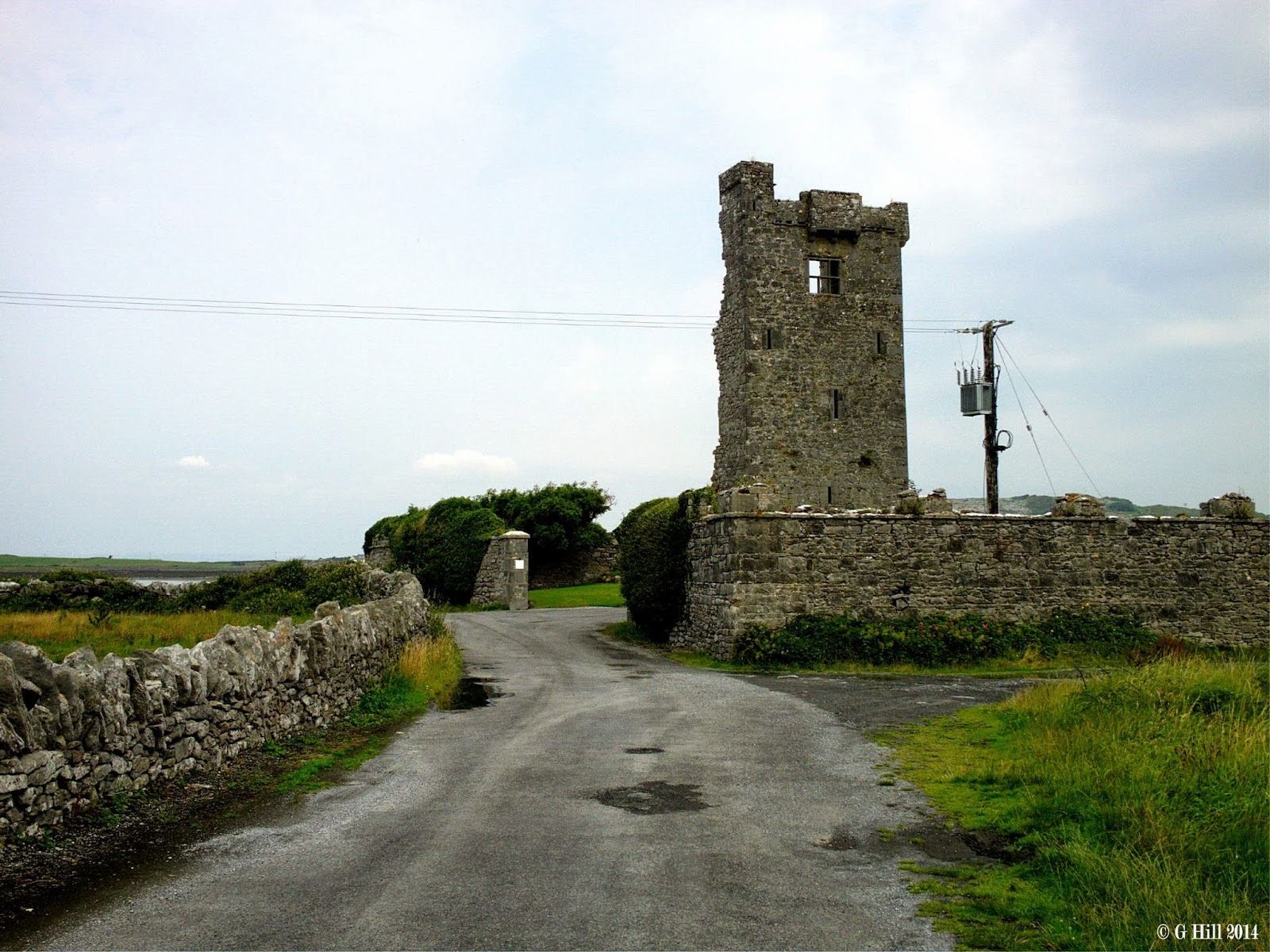 This five storey tower stands on the coast between Kinvarra and Ballyvaughan. Known as Muckinish Castle (Muckinish being translated from Gaelic as Pig island) the Castle is also sometimes referred to as Ballynacregga. The Castle was built c.1450 by the O’Loughlins and is now in a ruinous state, a testament no doubt to a turbulent past. Now the only full wall standing is the South wall. Portions of the West and a good deal of the East remain but the entire North facing wall has collapsed into rubble on the strand below. The ruins remaining stand seventy four feet high and there is a machicolation for defence purposes on the parapet of the South wall.
It’s hard to miss this ruin as it is just off the coast road a little out of Ballyvaughan. A lane way provides access from the main road. Just adjacent to the ruins a series of holiday homes have been built and so parking is easy in the landscaped area just in front of the Castle. When we visited I was struck by the familiarity of the place and realised that I had actually been here before back in the early 1990’s. Nothing seems to have changed much although a little more wall may have fallen and there was as before virtually nobody else around.

The ruins are striking, standing tall over the bay and it is possible to clamber over the edge of the West facing side and climb down to a small entrance just above the beach which is now impeded by the fallen masonry. But still you can get a look inside at the ground floor through one of the windows adjacent.
Standing down on the beach below and with the whole North wall collapsed you can see the innards of the tower. You can clearly see that the first and third floors were vaulted. The Castle sits on a narrow part of an isthmus jutting into Pouldoody bay and definitely would have held a very strategic position.
An interesting site then but I wonder how much more subsidence will take place in the foreseeable future. The landward side seems solid enough but as for the seaward….


To find the ruins take the N67 from Ballyvaughan towards Kinvarra and after about 4KM you will spot the Castle ruins on your left down towards the bay below. A walled lane way brings you directly to them and you can park in front of the Castle.
Posted by Castlehunter at 13:16