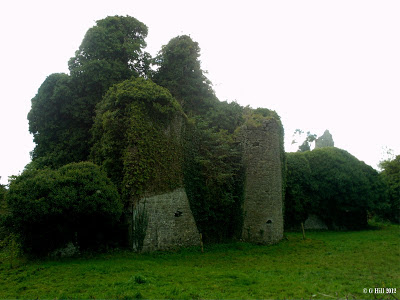 Above Image: The two flanking Towers 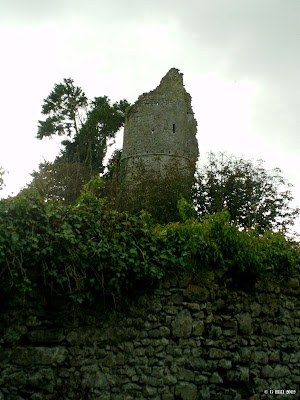 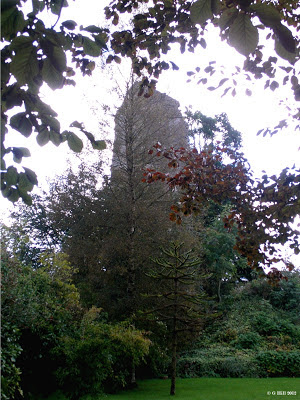 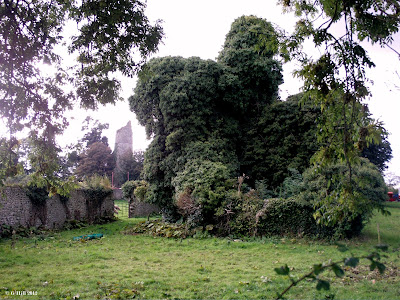 Image Below: The Stair Turret 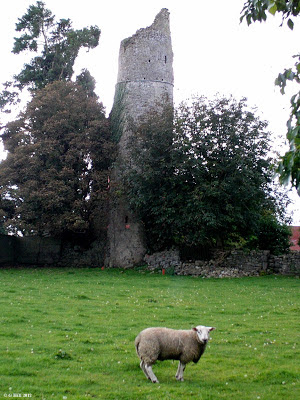 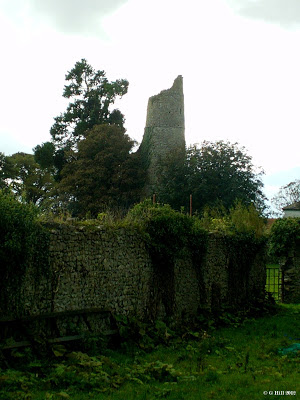 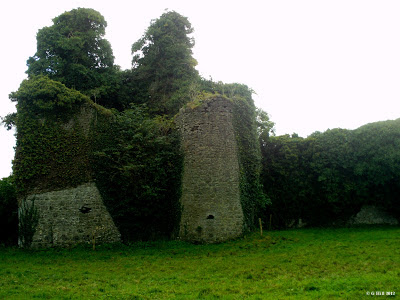 We located these ruins by pure chance.We were in the area looking for Kinnefad Castle (See earlier post here) and I stopped to get some directions from a local man busy mowing his lawn. In talking he mentioned the existence of Castlejordan so we went to take a look on our way.
There is very little information regarding these ruins but what I could uncover is that a young man named Jordan De Courcy, in exile in Exeter after his father's death, returned to Ireland in the early 13th century and built a fortress here. We can only assume that these ruins are what remains. It later became the ancestral home of the Giffords. In 1661 Thomas Gifford became the first Baronet although the Baronetcy is said to have ended with his demise a year later. There are records of some later Giffords which include an attack on the Castle against Sir J Gifford and Lady Jepson by rebels in 1642, but it all becomes rather sketchy after that.
The ruins sit beside a bridge on the River Mongagh. When we located them we found they are mostly on private land with a large modern house adjacent. The lane way leading to the gates of the house affords a view of two towers, one of which is now covered in ivy. We managed to cross over the grassy area which was only cordoned off by some twine and have a closer look without infringing on the house which squarely says private property and in doing so discovered a doorway that led to what looks like the remains of a bawn. Beyond this but fenced off is a curious circular tower almost resembling the Wonderful Barn
in Kildare (see previous post here) This appears to be a turret stairs of maybe four storeys and although looked interesting was unfortunately inaccessible.
While there is not much more of the ruins left, what remain are spread over a considerable area prompting the thought that they are all part of the same structure rather than separate entities, but this is not entirely a   certainty. If they are then Castlejordan must have been a formidable place in its time.
Unfortunately the two flanking towers look as if they will disappear soon under a coating of ivy. It would be nice to see them both cleared in time to reveal the impressive ruins that lie underneath.
We didn't stay too long here as we felt we were possibly trespassing and we had other Castles to see in the area but it's certainly worth a stop at Castlejordan if you happen to be passing.
To find the ruins take the M6 motorway and exit at junction 2 taking the road to Ballinabrackey. Drive for approx 7.5km until you reach a small T-Junction. Turn right and drive for a further 200m until you see a signposted right hand turn for Castlejordan. Take the turn and cross the stone bridge and you will spot the ruins a little down the road on your left. Parking on the roadside is possible.