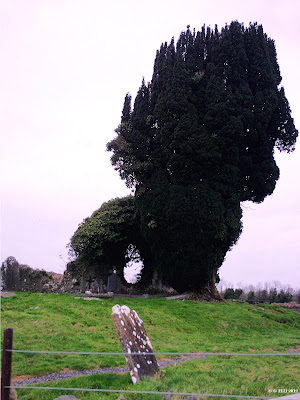 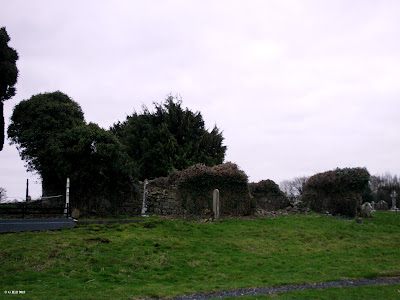 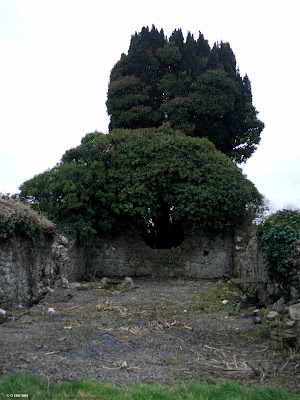 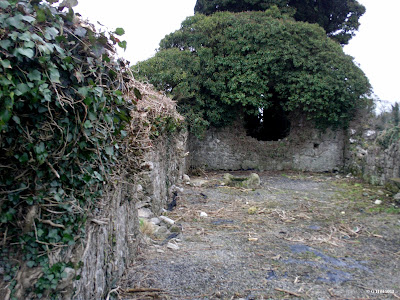 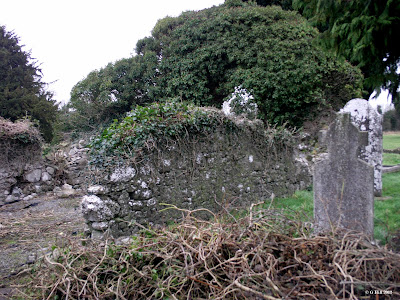 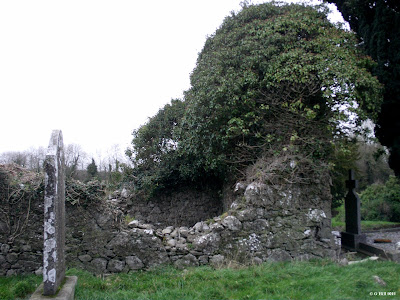 Downings is a townland in Co Kildare a little west of the optimistic sounding village of Prosperous. Sited here just off the main road to Allenwood are the ruins of a small Church. Such small remains would not normally warrant a visit, but these are in fact built upon one of the oldest ecclesiastical sites in Ireland. Within the present ruin is the site of the Cell of St. Farnan, circa 6th Century, one of the first Christian Churches in this area. Nearby to this site also is the St Farnan's well, whose waters once imbibed are said to have a dampening effect upon the desire for alcohol!
The ruins of the Church are surrounded by a circular wall in the pattern of earlier Christian burial sites and indeed part of one of the original ramparts still remains today. The Church was probably built by the Knights Hospitallers around Norman times and the area it occupies measures approx. 42 feet by 16 feet.It appears to have been in ruins by 1837 according to Samuel Lewis' directory.
It is not difficult to find Downings although it is not signposted. We found it's exact location by scouring the road to Allenwood on Google Maps (Satellite) finally spotting what looked to be a graveyard. When we arrived on site we found a metal gate that appeared to lead to the ruins but had Co. Council warnings of "No Dumping" and was well and truly locked. A bit disappointed and about to leave, we just happened to spot a smaller gate about 20 feet to the right in a hedgerow and behold it led into the field in which the walls of the graveyard were visible. It looked to be private land but there were no prohibitive signs and the gate wad just tied with some rope.We followed the country code and after we had entered closed the gate behind us.
It had been raining a little earlier in the morning and so this crossing was decidedly swampy in places, but we eventually made it to the outer wall. There appears to be some restoration work in progress by a local concerned group and they have requested on the banners draped on the walls not to disturb their handiwork.
"Take nothing but photos and leave nothing but footprints" as the old saying goes!
A small pin is required to be removed to open the gate in the wall and once done then you are in.There is not a great deal  to see really, the remains are scant but it is interesting to see the layout of an ancient burial site. The east facing gable is mostly standing with a circular hole where a window one was. A large tree looms over this end giving quite a dramatic effect. The gable is ivy covered  and there are sections of the Church walls still in evidence to give you an idea of it's original size.Centuries of wear and tear has taken it's toll but as mentioned, local effort may slow down the process a bit. It's always a shame when an important historical structure ends up covered in vegetation and perhaps disappearing from view. Annaghaskin Church in the Enniskerry area is a case in point. We are still trying to locate it and have so far narrowed it down to a clump of trees and overgrowth in a field in the Monastery area of Enniskerry.
If in the area of Prosperous check out Downings ruins, a very old and strange place indeed.
To find the ruins of Downings, take the N4 from Dublin and exit at junction 5 for Celbridge. Continue on the R403 through Celbridge, Clane and Prosperous. About 1.5km outside of Prosperous watch out for a wide gate with hills of gravel on your left. You can park here. The gate for the entrance to the field is to the right of the larger gate opposite the gravel pit.
Posted by Castlehunter at 19:52