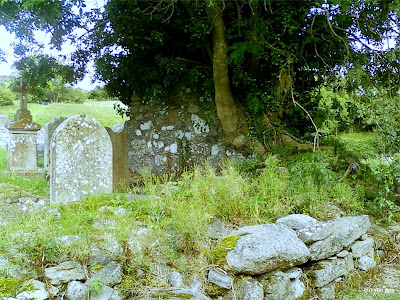 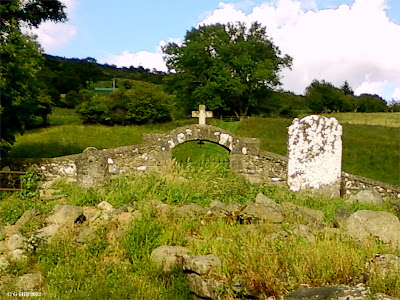 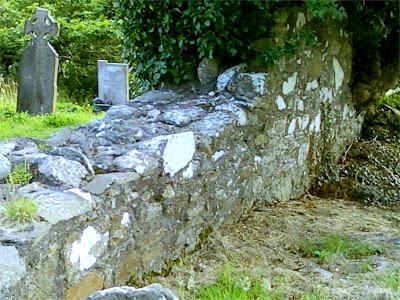 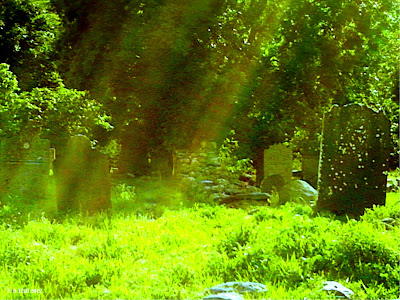 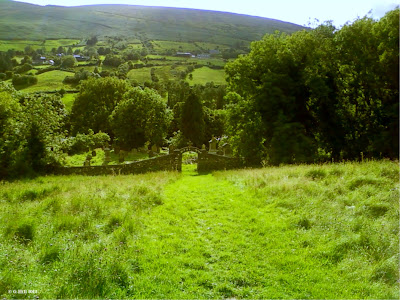 Above Image: The approach to St. Anne's 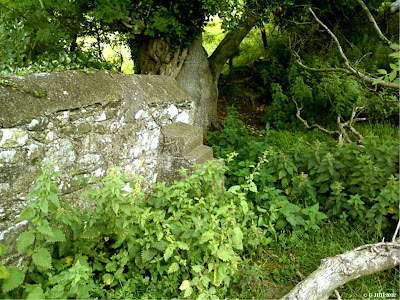 Above Image: The wall steps 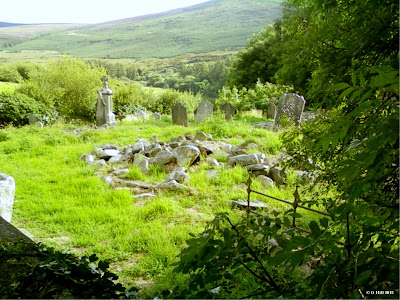 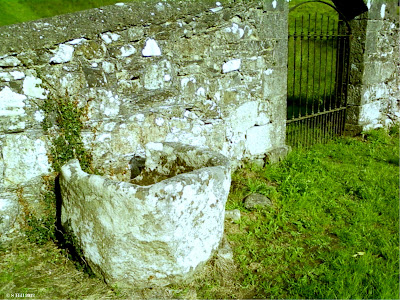 Above Image: The stone font 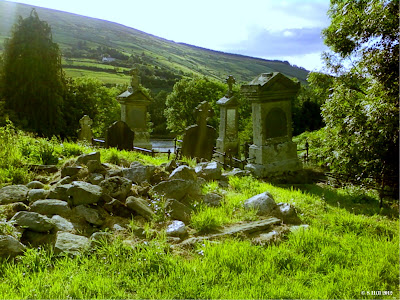 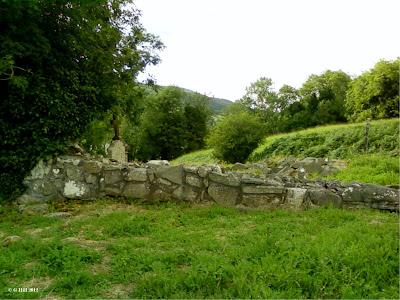 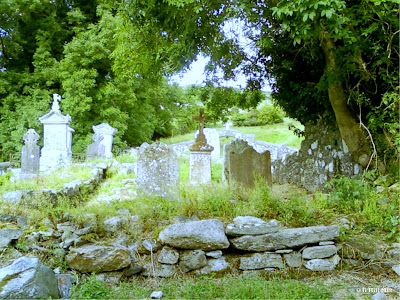 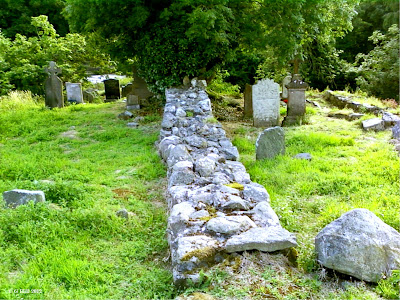 The very scant remains of an ancient Church can be found on the graceful slopes of the Glenasmole Valley in Co. Dublin.
The Church dedicated to St. Santan was built on an ancient site called Kilmesantan, meaning Church of Santan. Santan was a 6th century Bishop who was mentioned in the book of Leinster.
The approximate date of the construction of the Church is vague and there is very little left to give any indicating factors architecturally of it's age. It was mentioned in records from the 13th century to have been within Irish territory because of insurgency in the area, so it is likely that it was well established by then. It survived in use until the late 1600's when it was finally abandoned and left to fall into ruination. The ruins themselves are positioned North-East - South-West and now only a portion of the South Eastern wall remains. In recent years the stones from it's walls have fallen and scattered around the graveyard, which is still used to this day for an annual outdoor mass. A clean up by locals resulted in the strewn rocks being stacked into tidy piles some of which now have again fallen over.
While unremarkable, the ruins are well worth visiting if only because of their age, the fact that they might not survive too much longer and because of the very picturesque location in which they stand.
We found our way down from the road in St. Anne's Village on a trail through a sloping meadow. There is a gate at a sharp angle to the road which you could drive by quite easily and miss. It has a cross upon it indicating holy ground.
The trail beyond the gate takes you down between two houses and into an open field where the trail continues on around the perimeter to the right. It was a summer's evening when we visited and it was an extremely pleasant walk.
The graveyard in which the ruined remains stand overlook the Glenasmole reservoir with it's ample plantation of Scots Pine and Douglas Firs. The site is surrounded by a stone wall and there is a large iron entrance gate which at first appears to be sealed shut. To it's right hand side amongst a nest of nettles is a rudimentary set of stone steps set against the wall, but on the other side is a steepish drop. Knowing that this site is part of the Dublin Mountain Walk we thought it strange that easier access was not available, so we looked at the iron gate again. As it happened it was just tightly jammed and with a bit of pressure it opened with a loud creak.
The Church remains may be unimposing but on close inspection you can trace most of the foundations of the Nave and Chancel giving you a fair idea of the the original size. It takes a bit of climbing around rocky ground to achieve this. I have seen an old photo of the ruins taken quite a number of years ago when there were more of the walls intact but they now seem to be disappearing quickly. Although the Church was long out of use, the graveyard was still being used until the 1950's. Just inside the entrance gate to the right, you will find the remains of a large stone font which although mostly complete has been damaged by an attempted removal some years back.
To find St. Anne's ruins, take the N81 from Templeogue to Blessington and exit at Old Bawn Rd (R113). At the top of this road take a right hand turn at the Old Mill Pub onto the R114. Take the second turn left and drive up the hill past the local Church until you reach a fork in the road. Take the right hand fork.You will need to drive approx. 2 miles up this steadily narrowing road until you reach a second fork. Again take the right hand fork signposted for Castlekelly. Keep your eyes peeled on the right hand side of the road until you spot a gate on a grassy slope leading down from the road. There is also a small road sign indicating the graveyard.
If parking, please note that there is a private gate adjacent so be careful not to block.
Posted by Castlehunter at 17:27