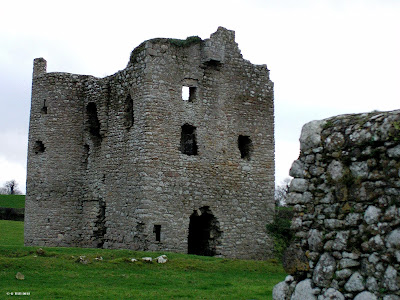 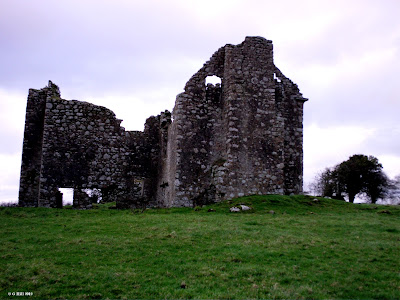 Above Image: The old house ruin 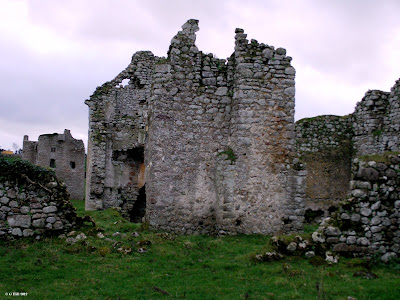 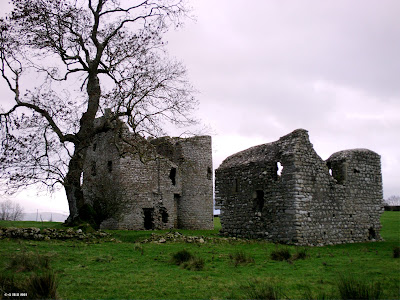 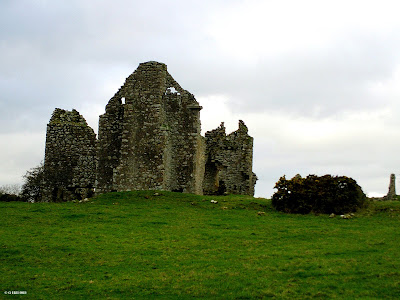 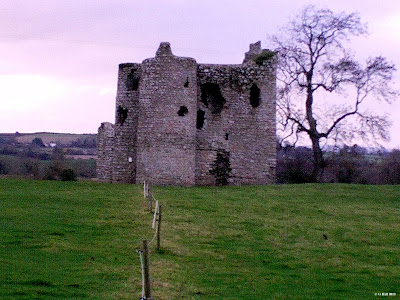 Above Image: The Gatehouse 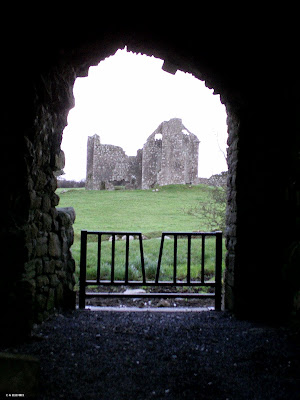 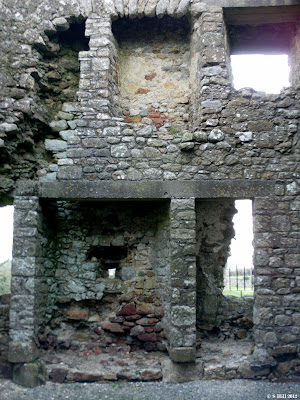 Above Image: Within one of the turrets 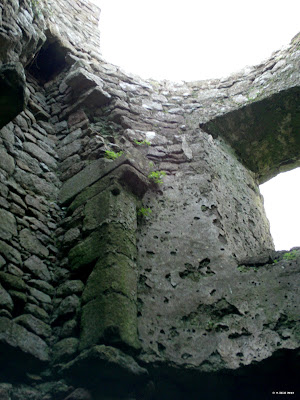 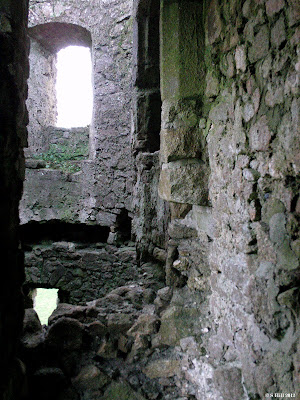 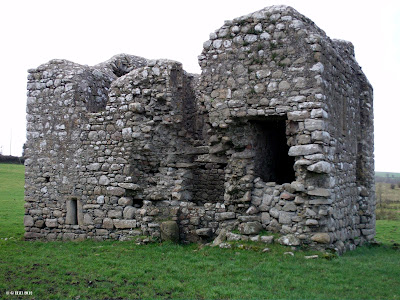 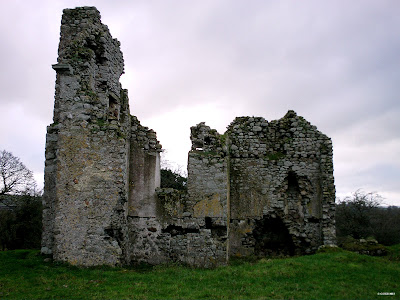 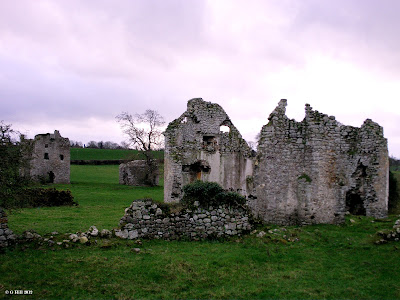 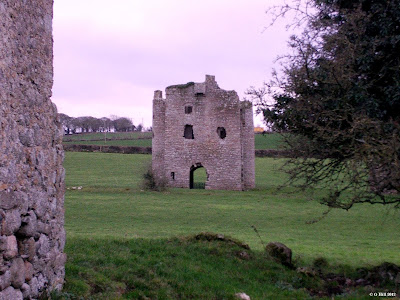 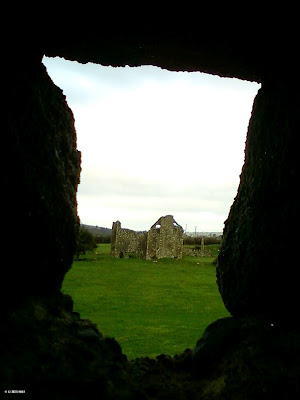 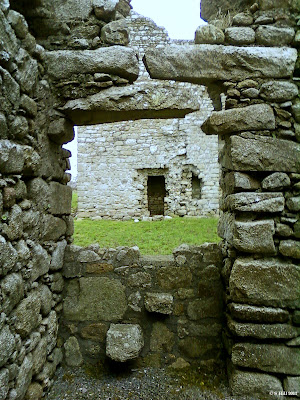 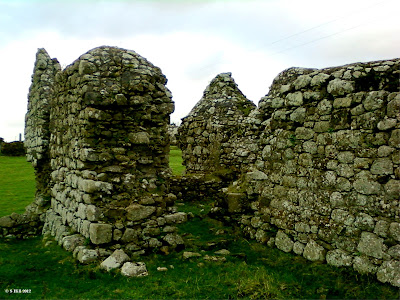 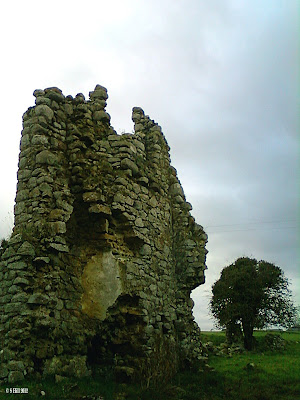 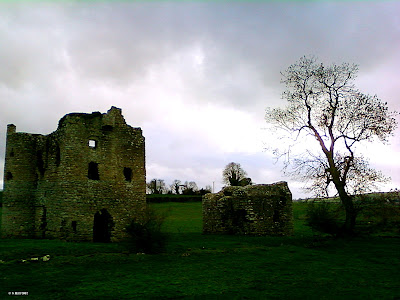 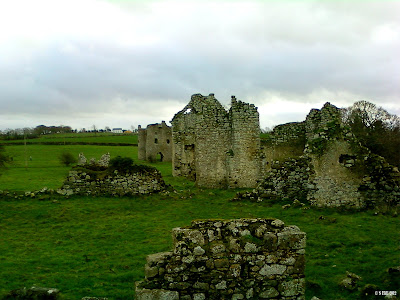 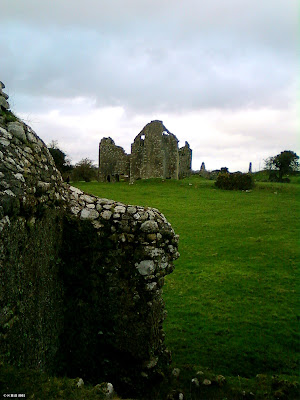 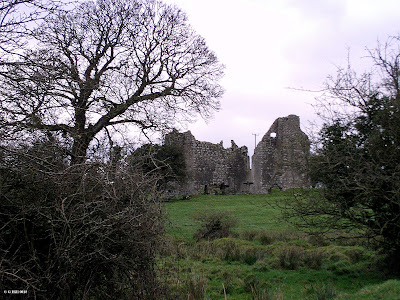 The striking remains of Ballyloughan castle stand in a meadow south east of Bagenalstown. The 13th century structure was once a very formidable castle with some evidence that there was also a moat. All that remain today are the impressive two-towered entrance gate and some remains of two corner towers that once were conjoined by a large curtain wall. On it's periphery, on a hill, are the remains of a later 16th century mansion, jagged and striking in it's ruination. It is believed that the Castle contained a large courtyard within and was occupied originally by the Kavanagh family and acquired much later by the Bagenals who were very prominent in the area.
The Castle passed hands through the years but may not have been occupied by it's later owners, in fact it is thought that it possibly may have been abandoned early in it's history. The ruins, while visible from the road and with a small OPW sign for information, are still quite off the beaten track and are located down a side road off the main Bagenalstown to Fenagh road.
We were visiting Ballymoon Castle in the area and decided to take a chance at finding Ballyloughan.
We parked at the iron gate where the information sign was situated and we could see the great gatehouse across the field, but the iron gate at the roadside was firmly padlocked. There was also a second gate to traverse inside
There were a few houses dotted along the road so we knocked on the door of the nearest one to see who we could seek permission to enter from. As luck would have it a very amiable gentleman took some keys and opened the lock for us. No clambering over gates this time!
The field is well kept and the ground underfoot is quite even , so it only took a few minutes to reach the ruins.
First impressions are of a well scattered series of buildings ending high on a hill and the feeling that in it's time this was a very large and well fortified site. The undulations of the surrounding ground would suggest the possibility of a filled in moat.
The gatehouse which is acknowledged as a fine example of it's type stands high and proud and is accessible through a quite tight rail underneath the archway. There is a spiral stairs leading to the upper floor and you will find passageways and chambers to explore.
One of the legends of the Castle is of a haunting following the betrayal of a local priest by the owners of the Castle who was in hiding from the Royalists. As soon as the man had been hanged strange sounds began to rush along the passageways of the Castle
One of the adjacent corner towers is accessible by way of a stone stile.We spent about an hour wandering from one ruin to the next in this large meadow. On an incline behind the Castle looms the ruins of a large mansion from which you can get a better view of what the Castle layout might have been like. All in all this is one set of ruins worth your time.Do seek permission to enter as they are on private land.
To find Ballyloughan take the R724 from Bagenalstown to Fenagh. About 2 miles along you will spot Ballymoon Castle on your left. Take the first right hand turn after Ballymoon and after approx. 500m you will reach a T-Junction. Turn left and and after a few yards turn right. You will find the ruins about 1km down this road on your right hand side. It is a narrow road so park close to the gate.
Posted by Castlehunter at 20:21