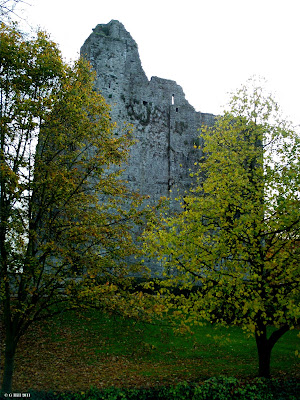 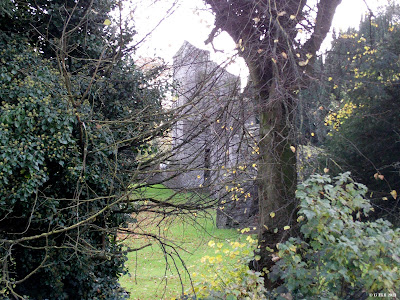 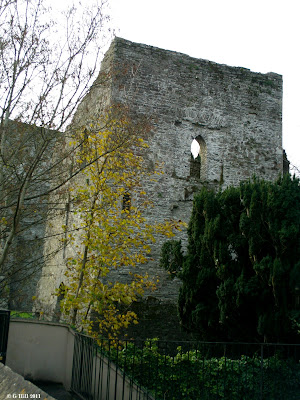 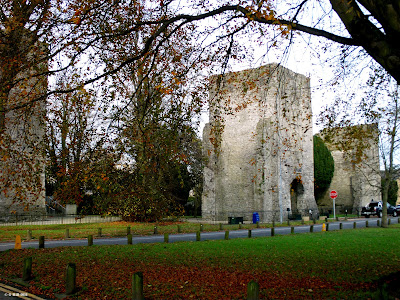 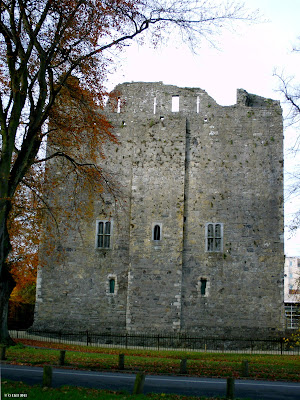 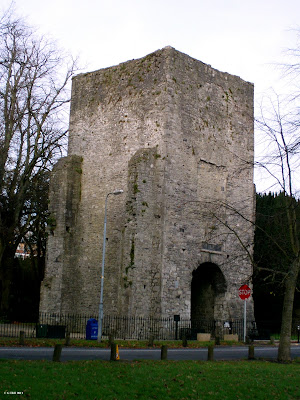 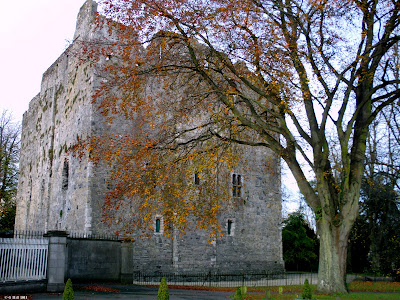 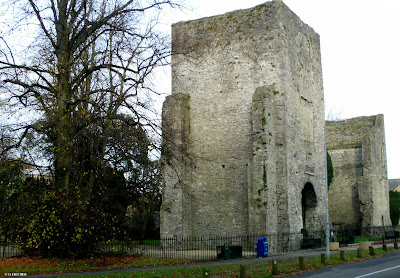 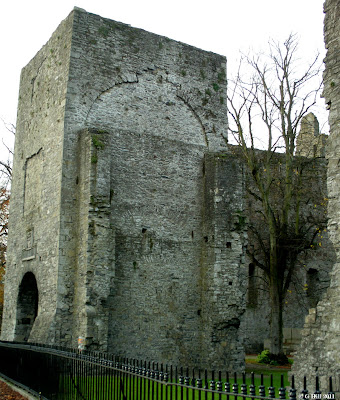 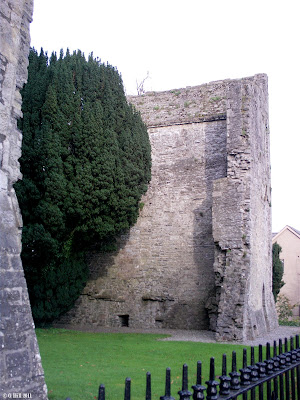 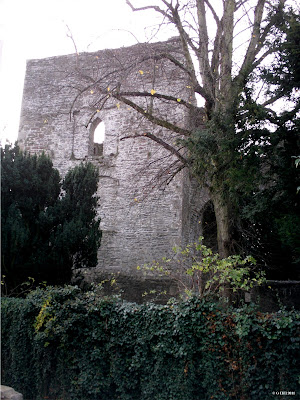 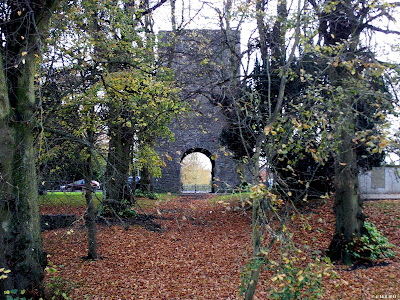 Above Image: The entrance gate from within 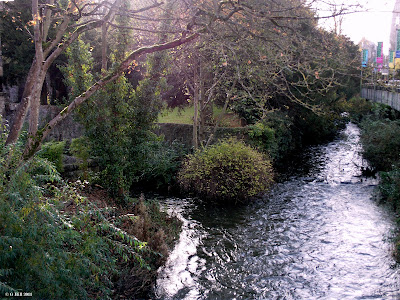 Above Image: The meeting of the streams behind the Castle

The ruins of Maynooth Castle are situated at the entrance gate to St Patrick's College Maynooth. The Castle was built by the very powerful Fitzgerald family around the early 13th century and was strategically constructed at the meeting of the two streams " The Abhann Slad" and "The Lyreen" . The Fitzgeralds ruled the Barony of Naas for a long period and many of them became highly powerful figures such as The Duke of Leinster and Lord Deputies of Ireland. The Castle was constructed at the most westerly point of The Pale and apart from the Keep which was first built in the early 1200's the remaining ruins seen today are additional fortifications dating from the 1400's.
The castle fell to the English forces of Sir William Skeffington in 1535 after an insurrection by Silken Thomas Fitzgerald after his enemies had falsified reports and stated that King Henry had executed his Uncle for treason. By 1537 six Fitzgeralds including Silken Thomas had been caught and indeed executed leaving victory to his cunning enemies.
The Castle was restored from falling into ruin by Richard Boyle in 1635 as his Daughter had married George Fitzgerald, his ward, but following another attack in the 1640's, the Fitzgeralds finally moved out and eventually constructed the Carton estate nearby. The Castle remained uninhabited thereafter.
The remains you can see today are the great Keep, The Gatehouse,with the Boyle/Fitzgerald crest above the doorway and the Solar Tower which was a residential structure. Nothing remains of the great wall that surrounded the Castle apart from a fragment incorporated into St Mary's Church adjacent.
The Castle is open to visitors during May to September from 10AM , free admission, where you can visit the Keep and part of the Cellars. But there are fine views to be had from the outside and also from the riverside pier behind the castle.It is truly an amazing structure especially the lofty Keep. The Town of Maynooth being a University town is quite busy, even on weekends. Traffic can be a bit ,so if visiting, go as early as you can.
To find Maynooth Castle take the junction 3 exit for Maynooth/Straffan from the M4 Dublin to Galway. Upon exiting, take the right hand turn on the roundabout which crosses over the Motorway. This is the Straffan Road (R406/R405). After about a mile you will come to a T-Junction with the Main Street. Turn left and you will see the Castle ahead on your right. Parking is available around this area but limited, so drive around a bit or do what we did and park in the supermarket car park on the Kilcock Rd. 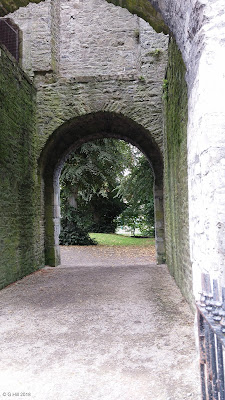 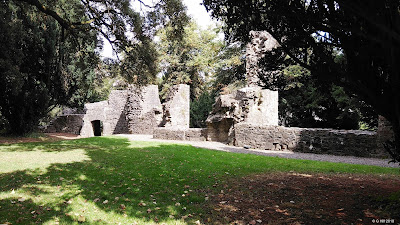 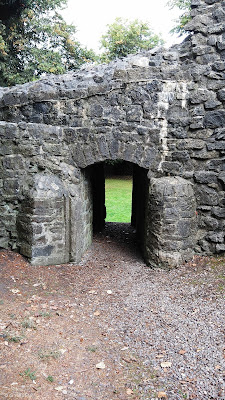 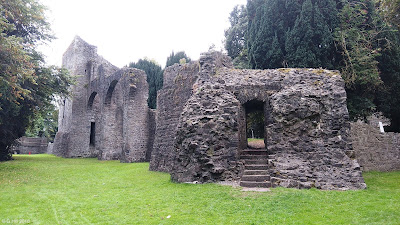 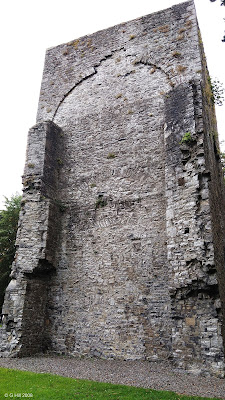 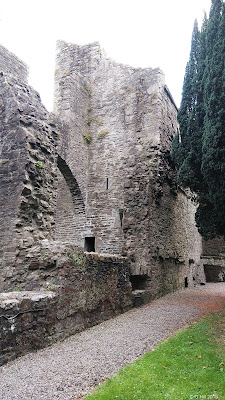 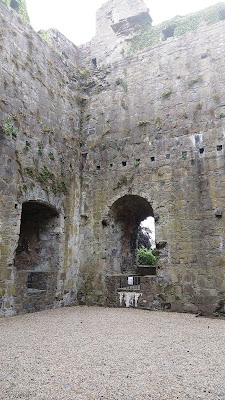 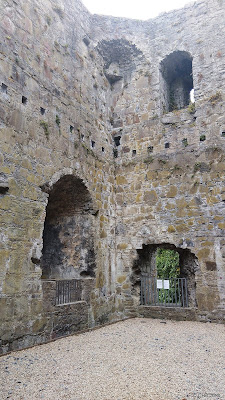 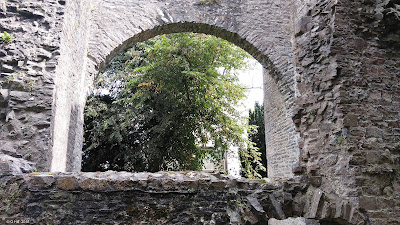 We returned here recently when it was open to the public and managed to get inside the keep and around the inner walls. A very helpful lady gave us the full history and made the visit all the more worthwhile.
Posted by Castlehunter at 20:28