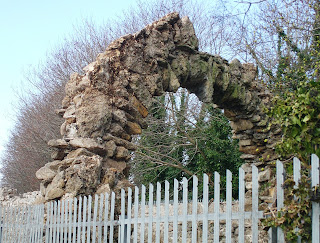 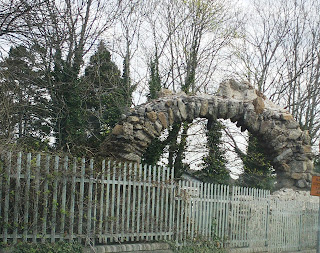 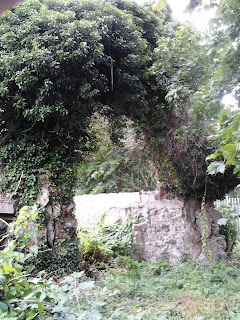 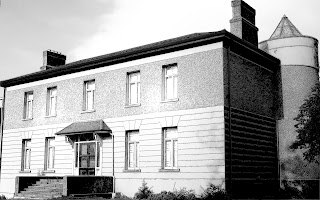 Above Image: Templeogue House. Parts of the old castle were
incorporated into the towers at the back.
Anyone who would be frequently driving down the N81 towards Templeogue in the last few years would have been surprised recently to see this stone archway appear as if out of nowhere. It has in fact been a feature for centuries but in the years following the 1980's it began to disappear beneath the ivy and bushes that grew alongside the then newly installed Tallaght by-pass. The Gothic style arch has now once again been exposed to the light as it is anticipated that it will become a feature along a new greenway being developed by the County Council.
The arch is not in anyway medieval or nor is it associated with the ruins of the nearby church at the Spawell roundabout (see earlier post here) but in fact a folly built as part of the ornamental landscaped gardens of the former Templeogue house demesne.
The house itself was by built in late Elizabethan times incorporating parts of the towers and subterranean vaulted cellars of the former 16th century Talbot castle. The lands had been granted to Thomas Domvile by James II following the bloody battle of the Boyne and it was Thomas's son Compton Domville who had the gardens laid out.
Both the Talbots and subsequently the Domviles were stewards of the City watercourse which ran on the North section of their land and Compton sometime following his Father's death in 1721 had several ponds designed in the forested gardens, that drew from the watercourse that connected to each other via a series of steps which had statues placed at each dropping point. At the Southern end he built the tall Gothic arch under which the stream flowed and then dropped as a twenty foot waterfall before rejoining the City watercourse.
In 1780 the Domviles moved to the lands at Santry and the ornamental statues and indeed an ornamental temple which had stood on a mound were transferred with them. Only the arch remained probably as it was not practical to take it down and try reassemble it. So as the estate waned the arch became a lonely sentinel over the diminishing gardens. Over subsequent years the streams and ponds dried up and disappeared and the mound on which the temple stood was finally levelled in 1972. The house is now utilized as a training centre and has been renamed St Michael's house.
I remember visiting the site of the arch some years back and finding little of it visible. From the roadside it just looked like part of the overgrown bushes. It was a forlorn sight. But now it has returned and serves as a reminder of a more fruitful time in its existence.
To find the arch take the N81 from Tallaght to Templeogue and after the Spawell roundabout look for it on your left behind a fence. Parking is difficult on the dual carriageway but if the gates of St. Michael's house are open (they are a few metres past the arch) you can park in the spaces inside the gate. The arch is fenced off but you can still get very close to it. If you like you can park at the church ruins back at the roundabout and take in both sites on foot.
Posted by Castlehunter at 15:37