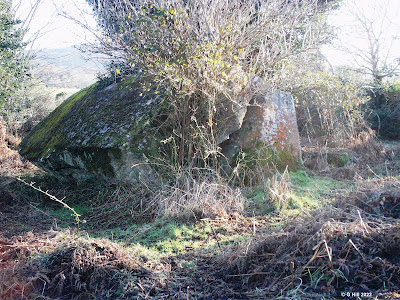 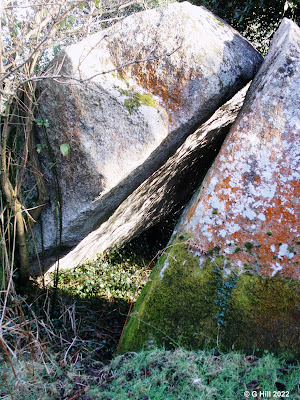 Above & Below Image:  The gap between capstone and portal stone 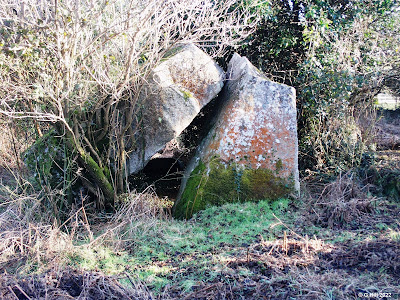 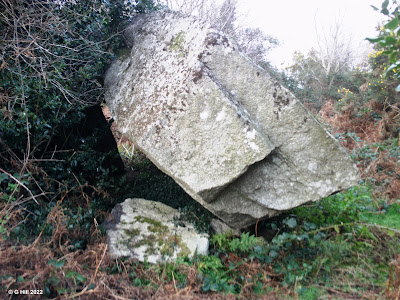 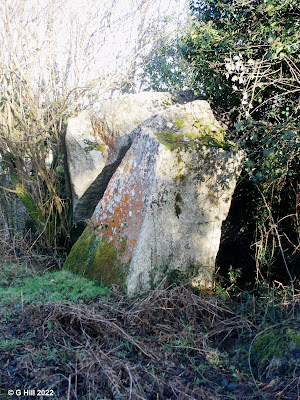 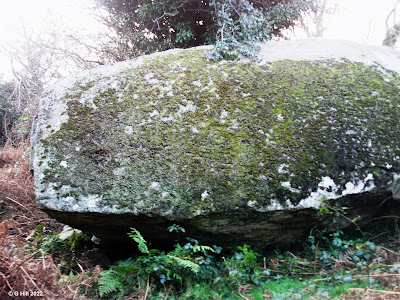 Above & Below Image: The huge capstone I came across this Dolmen a number of years ago but had a chance more recently to visit again. Situated in Woodtown not far from Rathfarnham it is generally known as the Mount Venus Dolmen.

The dolmen is actually an ancient portal tomb dating to the Neolithic period sometime between 4000BC - 2500BC. Portal tombs generally consist of two or more vertical stones supporting a a larger more flatter capstone. They were often covered over with soil or stones or in some cases laid bare.

The Mount Venus tomb can be found in a bushy and somewhat neglected spot on an earthen bank above the West side of the approach drive into the DSPCA animal shelter. There are a set of steps leading up from the car park to a small recreation area but a small diversion in through a hedgerow brings you to the location.

I was disappointed to see that the area was still somewhat overgrown but its hard to really miss this huge monument from the past.

The capstone measuring approx 18 feet by 9 feet has partially collapsed off all but one of the portal stones forming a triangular crevasse in between. A smaller stone lies beneath and another portal stone adjacent which is overgrown measures approx 15 feet. The size of the portal stones would indicate quite a high entrance height into the tomb when it was in its complete standing form..

The capstone is considered to weigh an incredible 44 tons!  William Borlase, a British antiquarian in his extensive publication "Dolmens of Ireland" described the dolmen as one of the most magnificent examples he had ever seen.

The dolmen has been in this ruined condition since the mid 18th century and is thought to have collapsed into its current state as a result of shock waves from the huge earthquake that took place in 1755 with its epicentre in Lisbon, Portugal. The shock waves also damaged part of Galway's city wall and some strong tsunami waters hit the peninsula at Auginish in County Clare destroying the central section of the peninsula thus creating an island offshore.

Even in its current state this portal tomb is worth seeking out. The land it is on is not owned by the DSPCA but I believe by Woodtown Farm. I don't think a close-up look at the dolmen would be an issue.

To find the tomb take the R115 (Stocking Lane) from Ballyboden towards Killakee. Go straight through the roundabout (junction with Stocking Ave) and continue for approx 1.4KM taking a left hand turn onto the L4026 towards Rockbrook. Continue down this road for approx 500m and you will see the entrance to the DSPCA on your right. Drive up the avenue and park anywhere along it. Then walk on toward the wire fence and gates that lead to the Cats and Dogs Home. There is a set of stone steps on your right just before the fence. Climb the steps and walk forward on the path until you reach the fenced hedgerow. Look for a gap near a field gate. The DSPCA gate is usually open between 8.00 - 17.30 Mon - Fri.