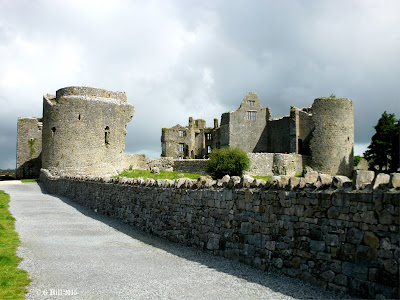 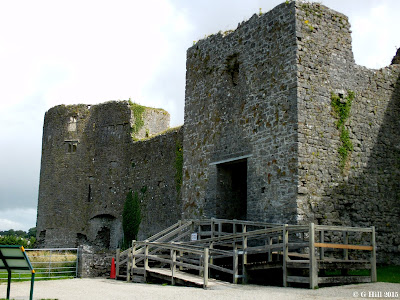 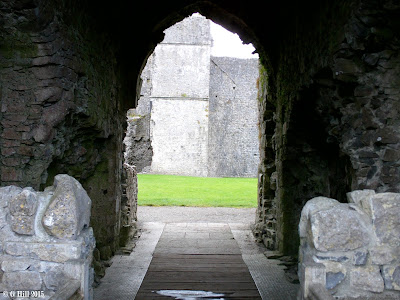 Above & Below Images: Entrance viewed from exterior & interior 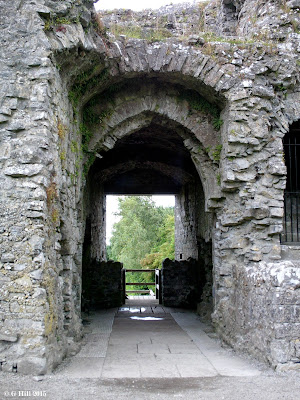 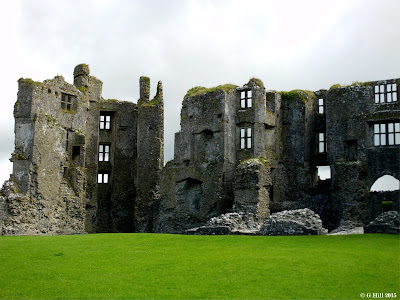 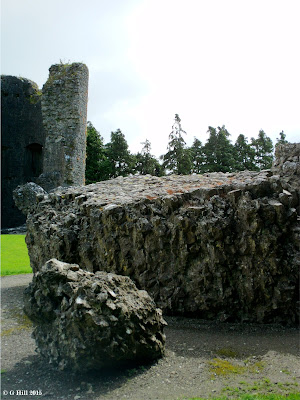 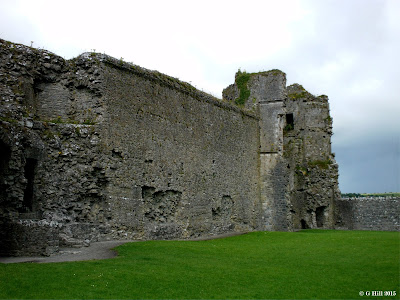 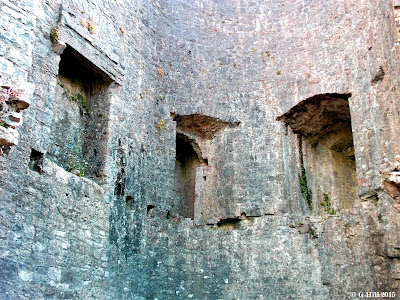 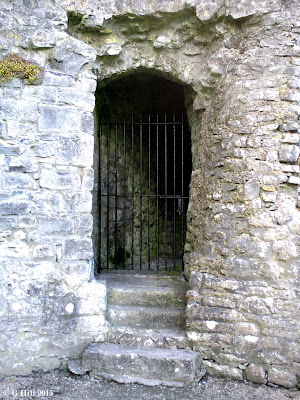 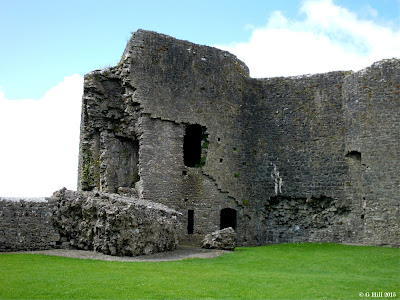 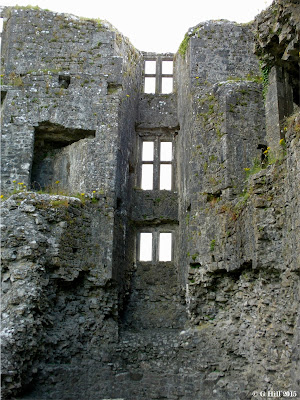 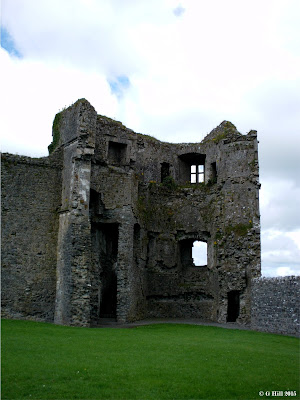 Above Image: Remains of corner tower 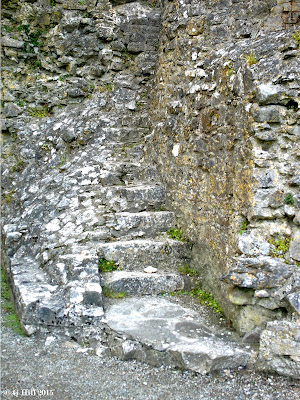 Above Image: Stairway to nowhere! 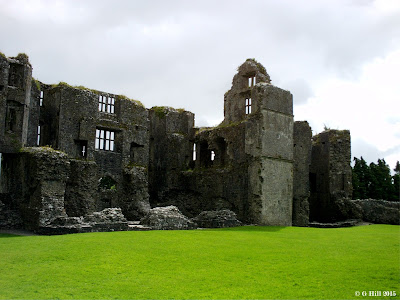 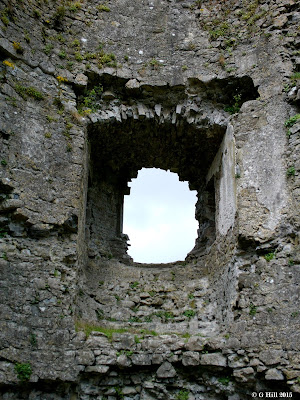 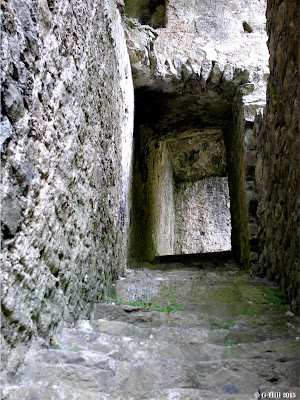 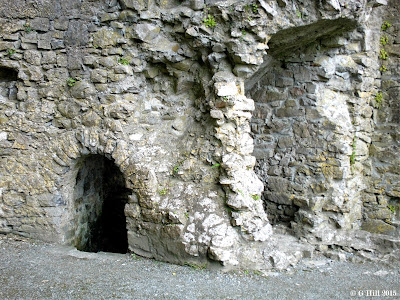 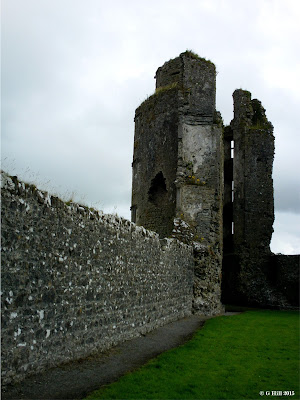 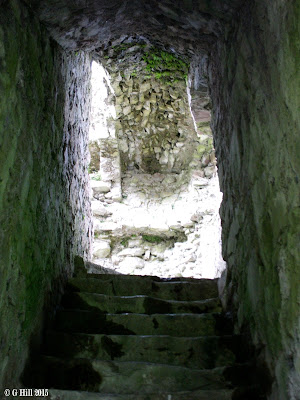 Above Image:  Another tower interior view 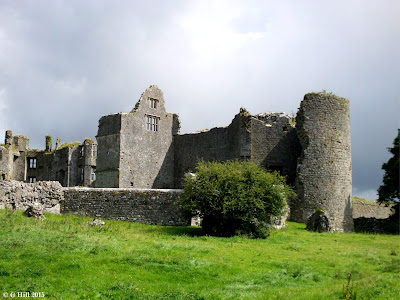 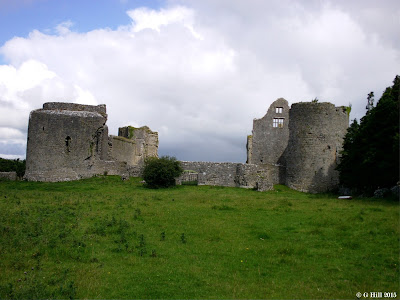 
This formidable castle was constructed in 1269 by the Robert De Lifford. The land it was built on was previously owned by the Augustinians but had been confiscated by the crown. The defences of the castle were magnificent including a large moat around the base and a two towered gateway. Quadrangular in shape the castle had towers on each corner and stood three storeys high. It went through some turbulent times and was attacked on several occasions including by the O’Connors in 1272. Although English control was regained the castle fell into O’Connor hands again in 1340 and remained so until 1569 when the castle was taken by the Lord Deputy. In the 1580’s Malby, the Governor of Connacht, made some extensive changes and added some additional buildings on the north facing side which included the mullioned Elizabethan style windows. He also had the moat filled in and the surrounds were landscaped into decorative gardens. In 1652 Cromwellian forces bombarded the castle and destroyed the fortifications. It was finally burned badly in 1690 and subsequently fell into ruin as its absent English owners did not want to reside there.
The castle is located in what is now Loughnaneane Park a very expansive public area in Roscommon Town and while not immediately visible from the town centre it can be seen clearly from the approach roads. A set of wooden steps and platforms enable easy access over what was once the moat through the large entrance gate. One of the towers within still has its vaulted roof intact. The interior is now a large expanse of manicured grass, the buildings destroyed and only the shell of the castle now standing. This includes large sections of the curtain walls that run between the corner towers. The North facing ruins are later buildings that contain the mullioned Elizabethan windows now looking stark and desolate. There are a couple of stairways within the ruins that have been gated off as they lead to sections that might compromise safety and so are not accessible but there is still so much to see here in this huge ruin. We spent about an hour wandering in and around its nooks and crannies. It is always a joy to get access so easily to one of the bigger castle ruins as so many can be tucked away from public view on private estates. Thanks go to those involved in the restoration for public access of Roscommon castle making it a must to see if in the area.

To find the ruins take the N61 from Athlone to Roscommon Town. As you approach the town you reach a roundabout adjoining the N63. Turn right at the roundabout onto the N63. Drive straight  through the next small roundabout and on the subsequent roundabout turn left back onto the N61 (there is a Aldi Store & KFC on your right as you approach the roundabout). Continue to the next roundabout and take the first exit left towards town centre (there is a sign pointing to the castle). Drive and take the second turn right onto Castle Lane. At the end of this lane is an entrance to Loughnaneane Park There is ample space to park outside the gate. You will clearly see the castle inside the park on the right.