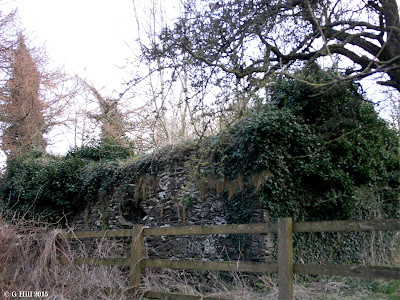 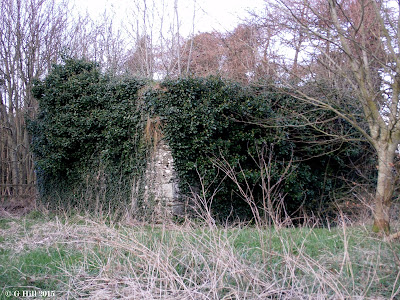 Above Image: A large pair of shears needed..... 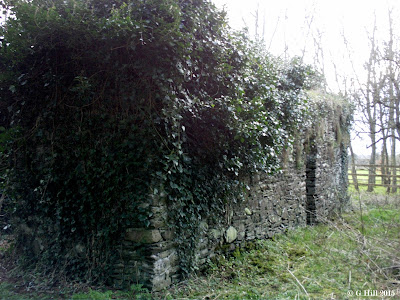 Above Image: The South facing wall 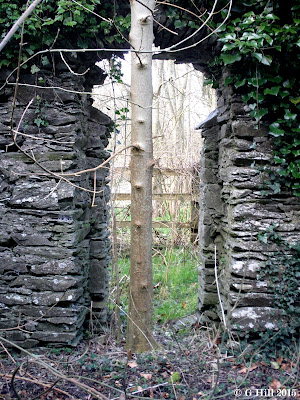 Above Image: Doorway in South wall 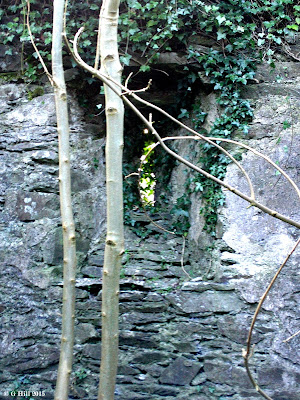 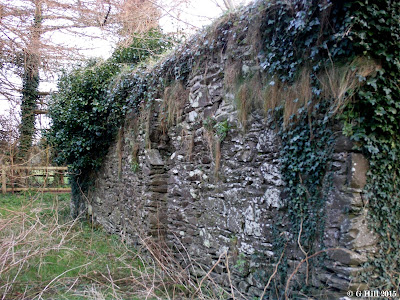 Oh dear this one is certainly on the wane. This medieval Church in Herbertstown caught our attention when a while back we saw it marked on the old 1897-1913 OS map, so we decided to seek it out. Eventually after a drive through Kildare our path led us down a narrow rural lane way South East of Newbridge. Only that we previously knew of its location we could have easily passed by without noticing it and ended up in the driveway of a private house.
Originally a small parish Church it appears at a rough estimate to measure approx. 27 feet X 15 feet in size and there are upstanding parts of all of the four walls. It is rife though with overgrowth and tons of brambles wind recklessly throughout it making it hard to navigate and indeed get a picture in your mind of what it looked like. It is listed as being in ruin by the late 19th century but I suspect that its fate was sealed long before that.
The ground around the ruin is unusually bereft of any gravestones making it an even more abandoned and forgotten ruin. While we were wandering around we drew the attention of the house owner adjacent to the ruins. He was in fact the owner of the land that the church is situated on and he had no problem about anyone looking at it as he had deliberately left a gap in the fence for access, but he was puzzled at our interest. He had actually thought that we might be from the OPW looking to assess it and possibly clean it up. Discovering otherwise he told us that he thought it sad that the ivy and brambles couldn’t be cleared but he just did not have the time to do it himself. Apparently a couple of council lads had turned up one day to survey it but he had not heard anything since. I told him I would be posting online about it and that maybe it might draw the proper attention needed. It is indeed a pity to see historical ruins like this be let go to ground.

To find the ruin take the R448 South out of Naas and take the 2nd right hand turn approx. 1.5km after the entrance to the Killashee House Hotel. Turn right onto this narrow road and drive approx. 3km until you reach a T-junction (there is a field gate opposite). Turn left at the junction and follow this again quite narrow cul-de-sac right to its end where you reach the gates of a house. The ruin is just to the right behind a fence. You can park adjacent to the gap in the fence.