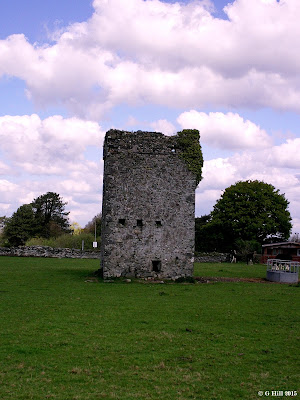 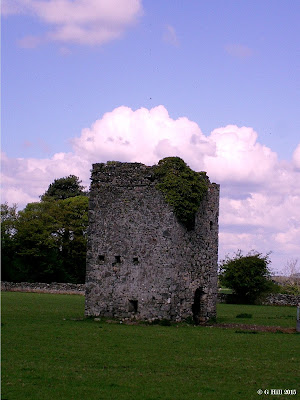 Here’s a small one to be getting on with. Constructed in the early part of the 15th Century Castle Rag is typical of the type of tower house built on the £10 Castle grant initiated by King Henry VI in order to build modest but defensive Castles that would dot the perimeter of the pale in an effort to deter marauding Irish clans.  A good number of these tower houses were built and occupied as residences with battlements attached.
The ground floor in this Castle has a vaulted ceiling while the first floor is the residential part and contains a fireplace. The Battlements are constructed above this and on the North East corner there is a projecting turret. Ivy is beginning to encroach a little on the uppermost part.
This particular Castle lies on private land behind Jigginstown house on the outskirts of Naas and could so easily be anonymous as only those entering the housing estate adjacent would be likely to notice it. It can be viewed at a short distance from the roadside of this housing estate. I’d like to have had a closer look but there were several horses wandering around the field and the land had a real no go feel about it. If in the area again I will try to see if I can locate the landowner and get permission to access it.

For the best view of the ruins take the R445 from Naas main street towards Newbridge. About 1KM along you will pass an Aldi supermarket on your left. Take the first left turn after this and drive for approx. 130m until you see a right turn onto Primrose lane. Follow this a short distance to a T-junction with Primrose Avenue. Turn right at the junction and follow the road around a bend. Park along here. The castle can be seen in a field on the right behind a perimeter wall.
Posted by Castlehunter at 13:35