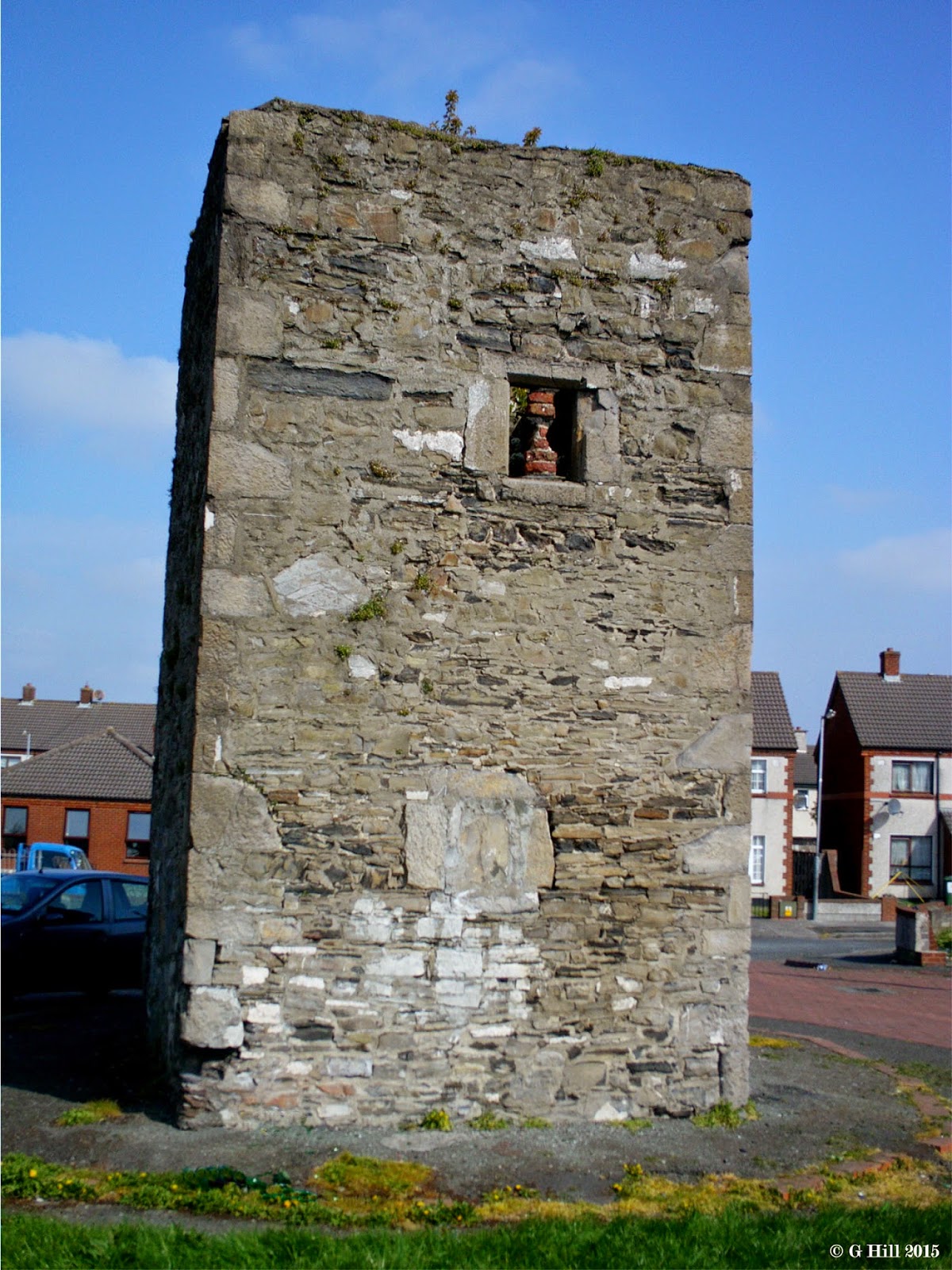 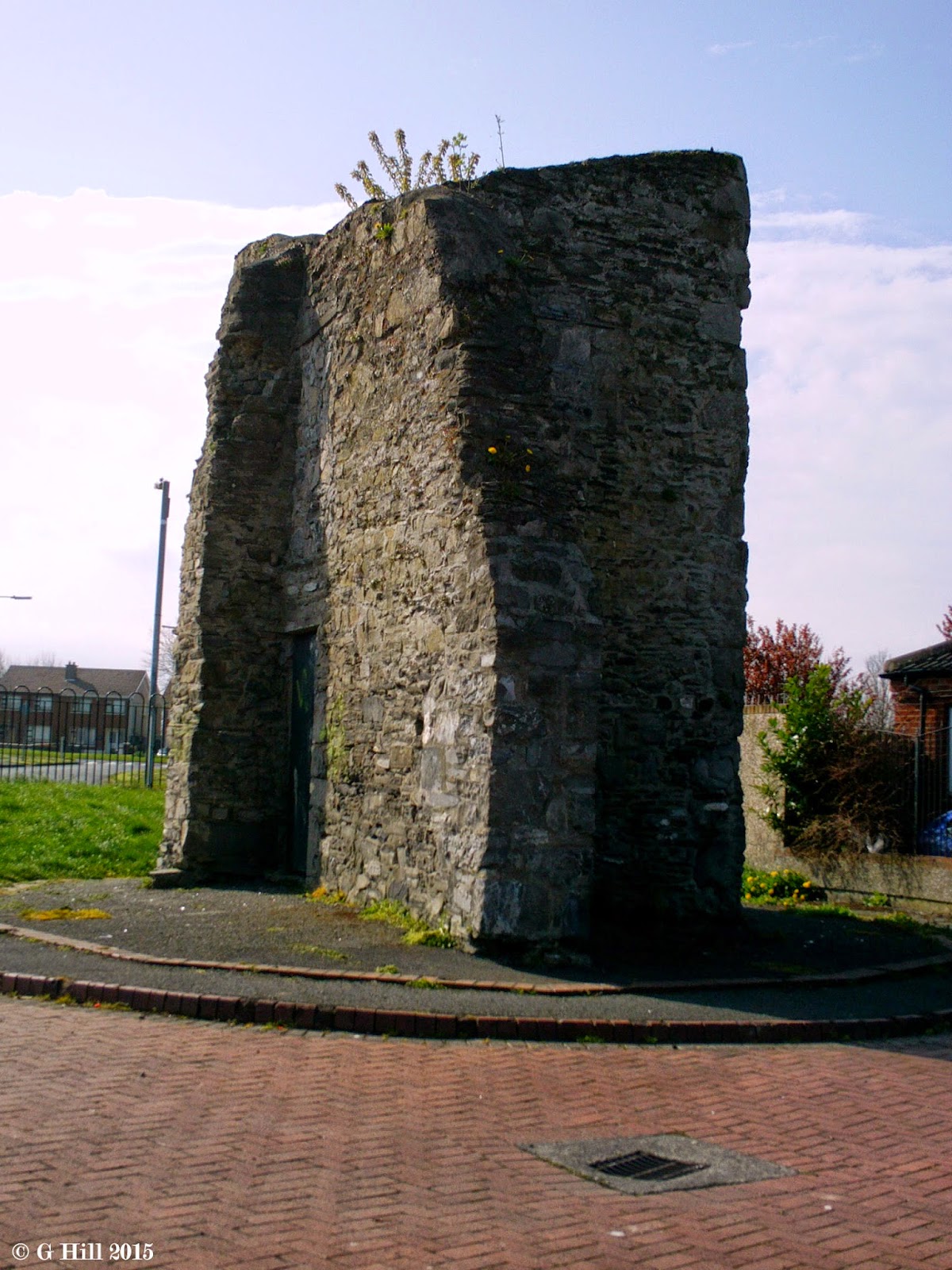 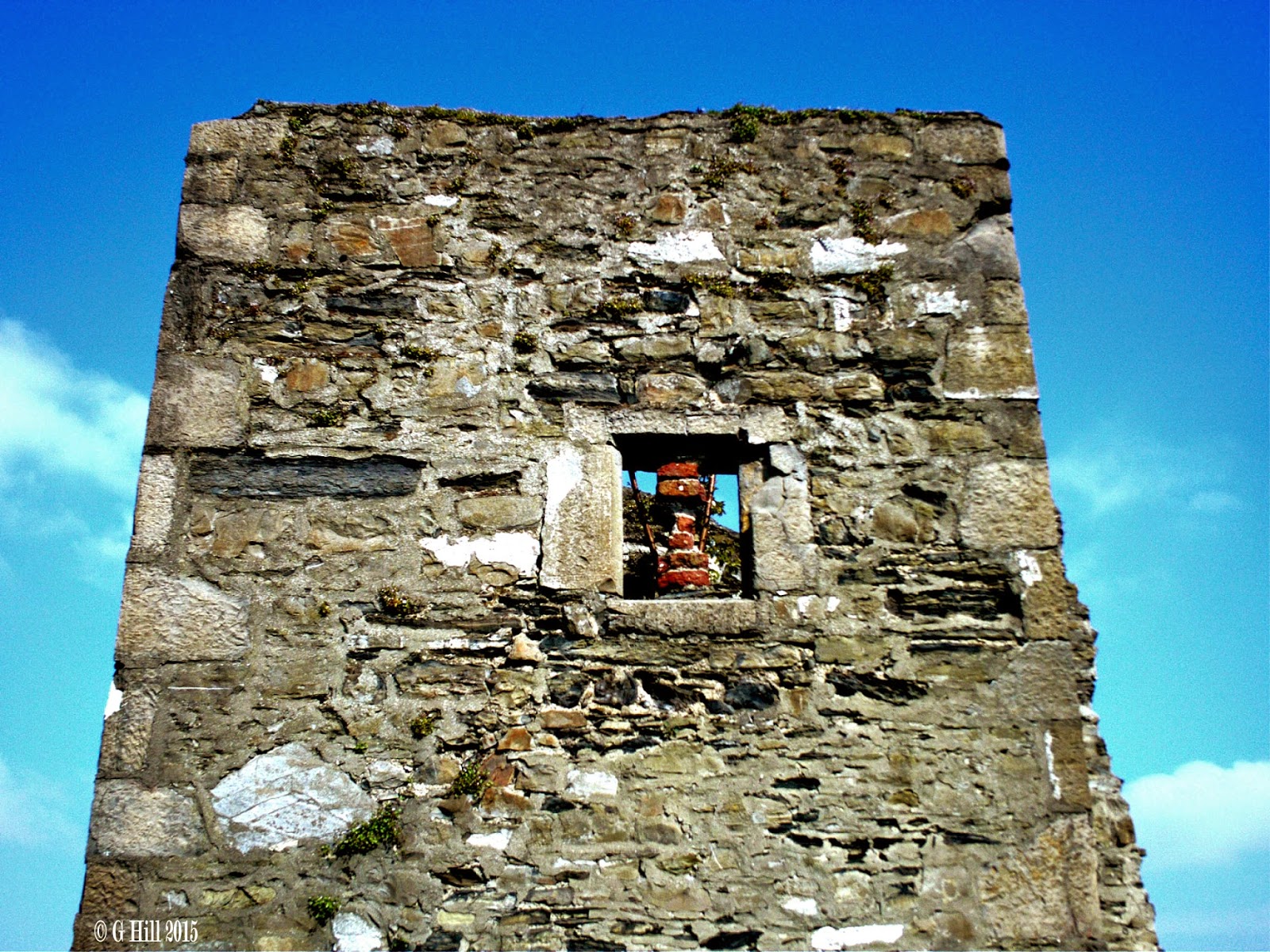 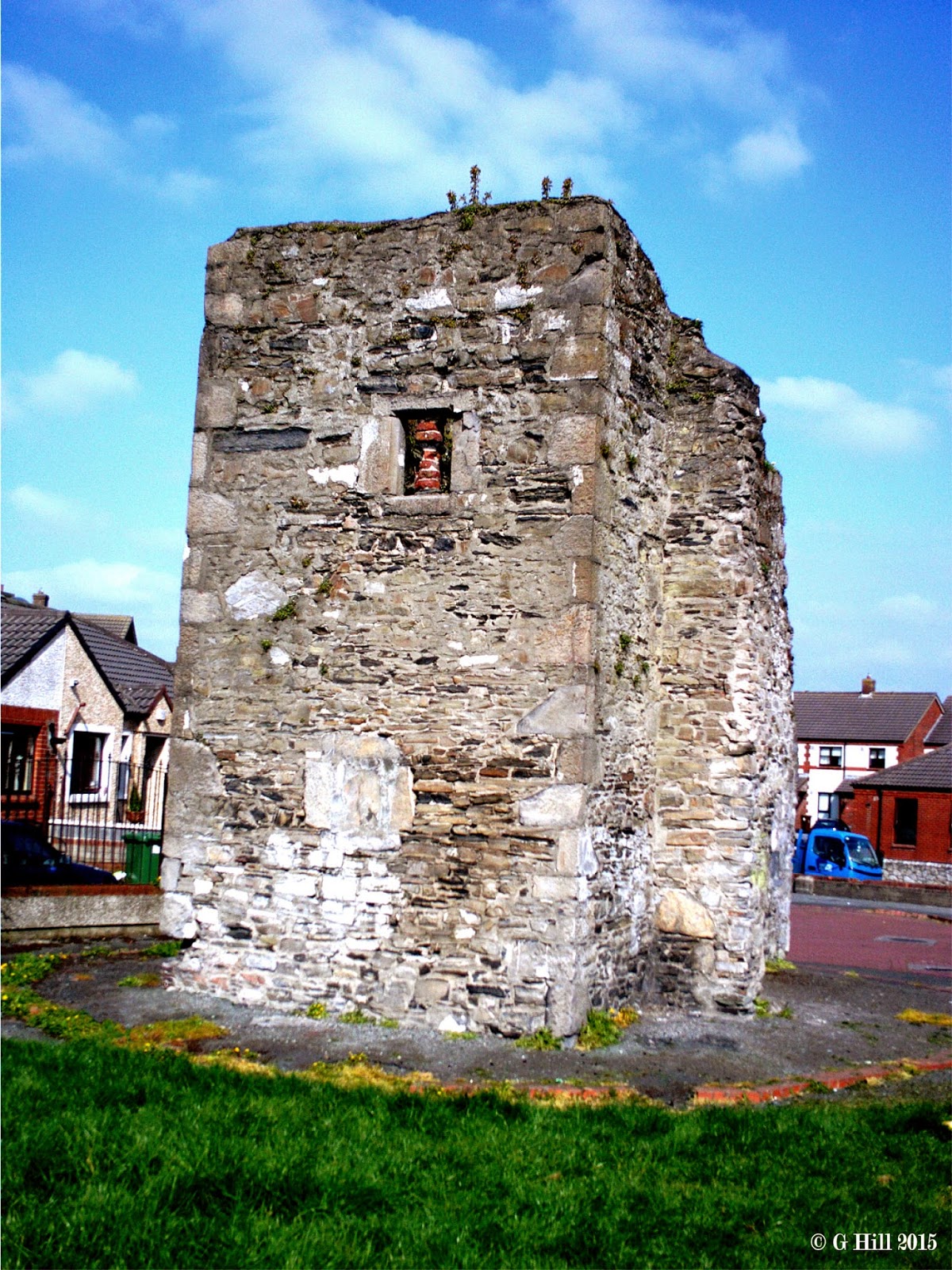 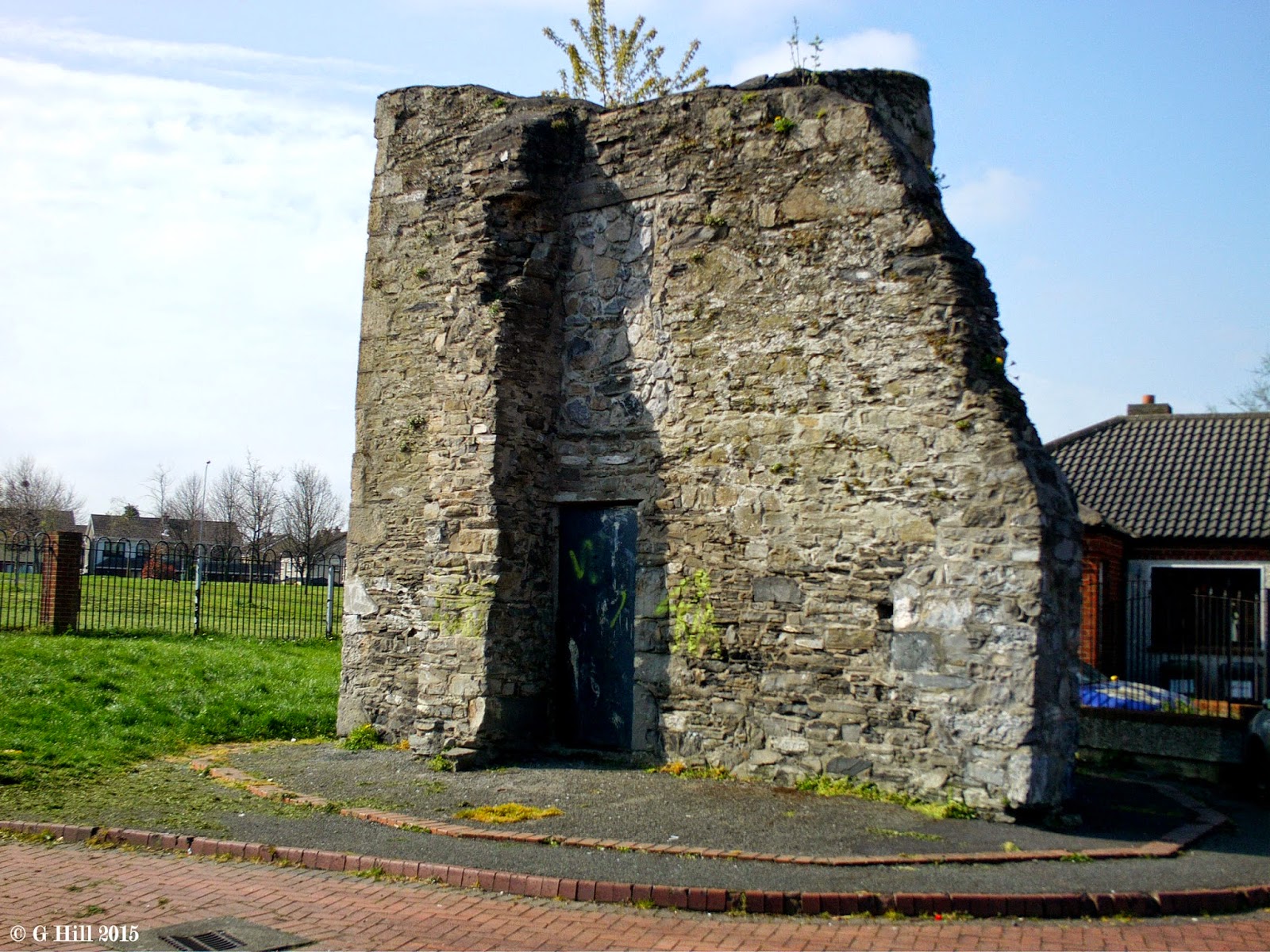 This modest castle was constructed in 1601 by Alderman Patrick Browne on lands passed to him. He and his wife resided there but its term of use was quite short. During the rebellion in 1642 the castle then defended by a garrison of 10 men found themselves conscripted into the confederate army and the Castle as with nearby Deansrath Castle (see earlier post here ) was lay siege to by English forces and no doubt suffered the same fate as Deansrath which was almost destroyed. A view of Irishtown Castle by the artist Gabriel Beranger from 1772 shows the Castle Roofless and pretty much in ruin.
Today the castle remains are surrounded by a modern housing estate and serve as a kind of monument within the estate given its own little corner in a cul-de-sac.
I visited on a quiet Friday morning to have look at this ruin with its brief but interesting history. The door on the East side is boarded up and there is a single small window in the South wall other than that it is featureless. The Castle in relation to the 1772 print looks decidedly shorter so it must have diminished over time. It remains anonymous in its surroundings but still I wonder how many residents know what history is literally on their doorstep.
Thanks go to Sinead Burke for pointing me in the direction of this ruin.

To find the ruin take the R113 heading Northwards from Newlands Cross and drive for approx.3.5KM until you reach a roundabout with a sign pointing left for Fonthill Retail Park. Take the 3rd exit on the right onto the R833 (Coldcut Road) and then the first left turn onto Greenfort Avenue. You will see the Ruin ahead of you. At the top of Greenfort Avenue turn Left and then take the first right onto Old Tower Crescent. This leads you directly to the Castle.