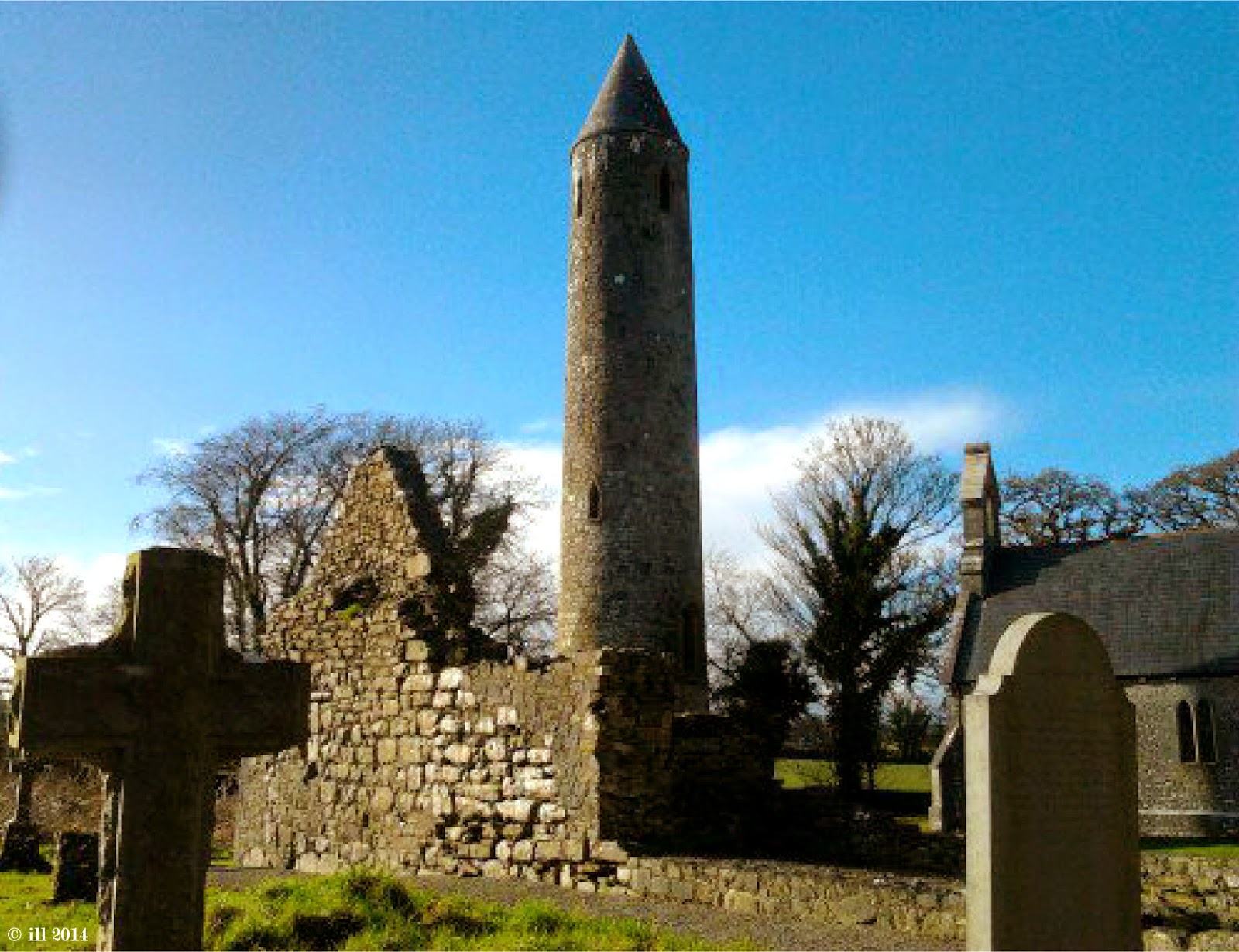 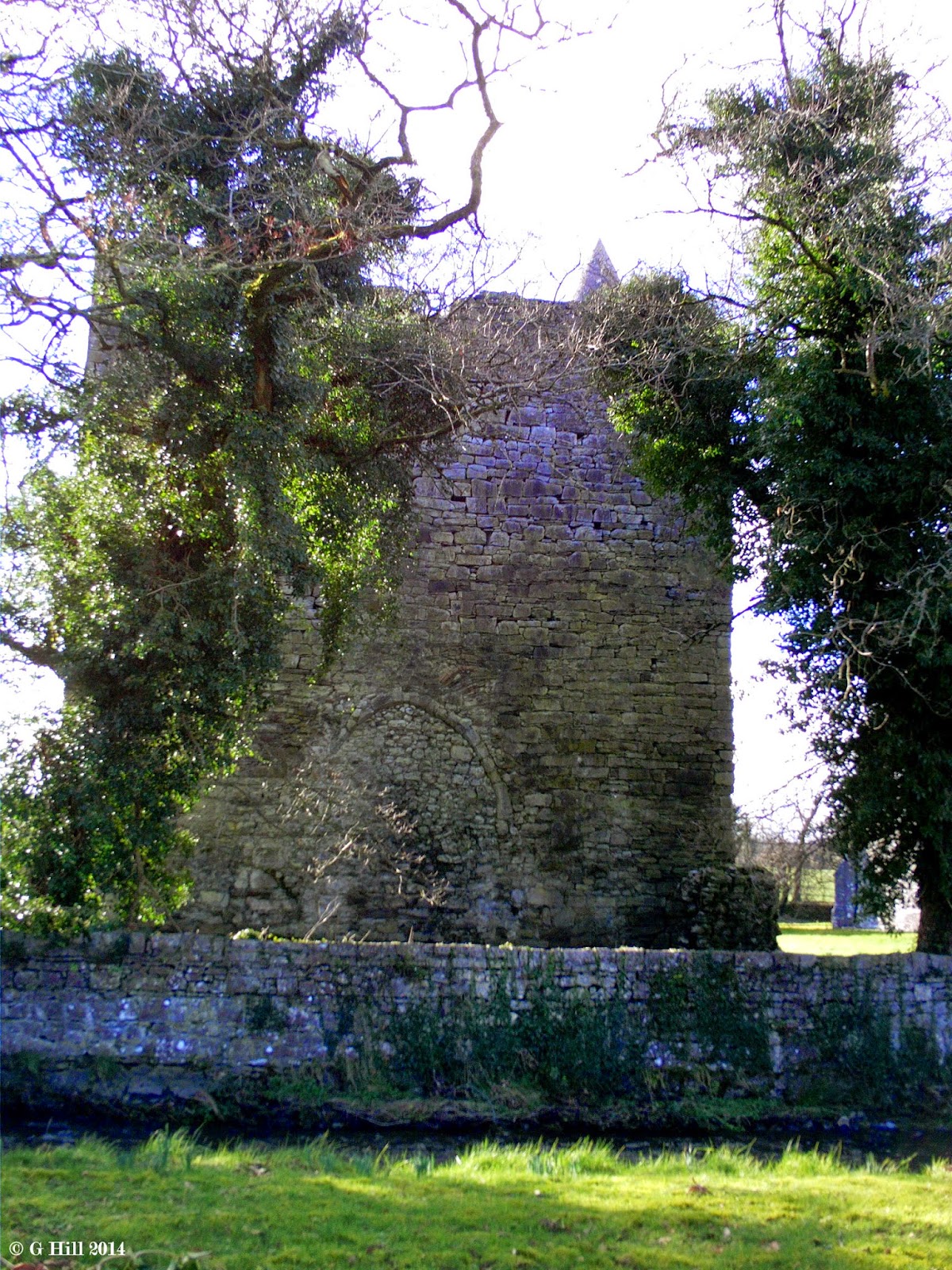 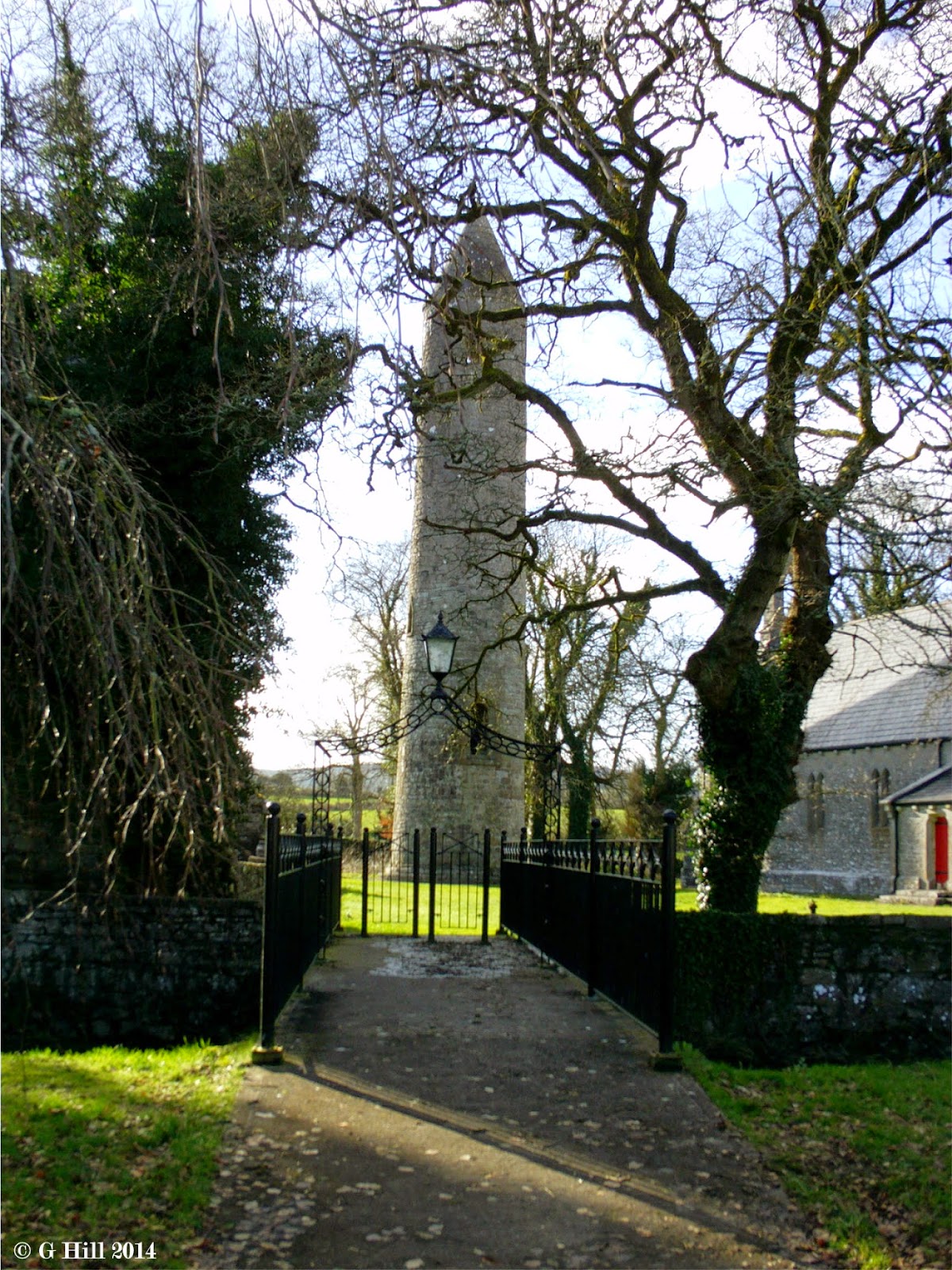 Above Image: The footbridge entrance 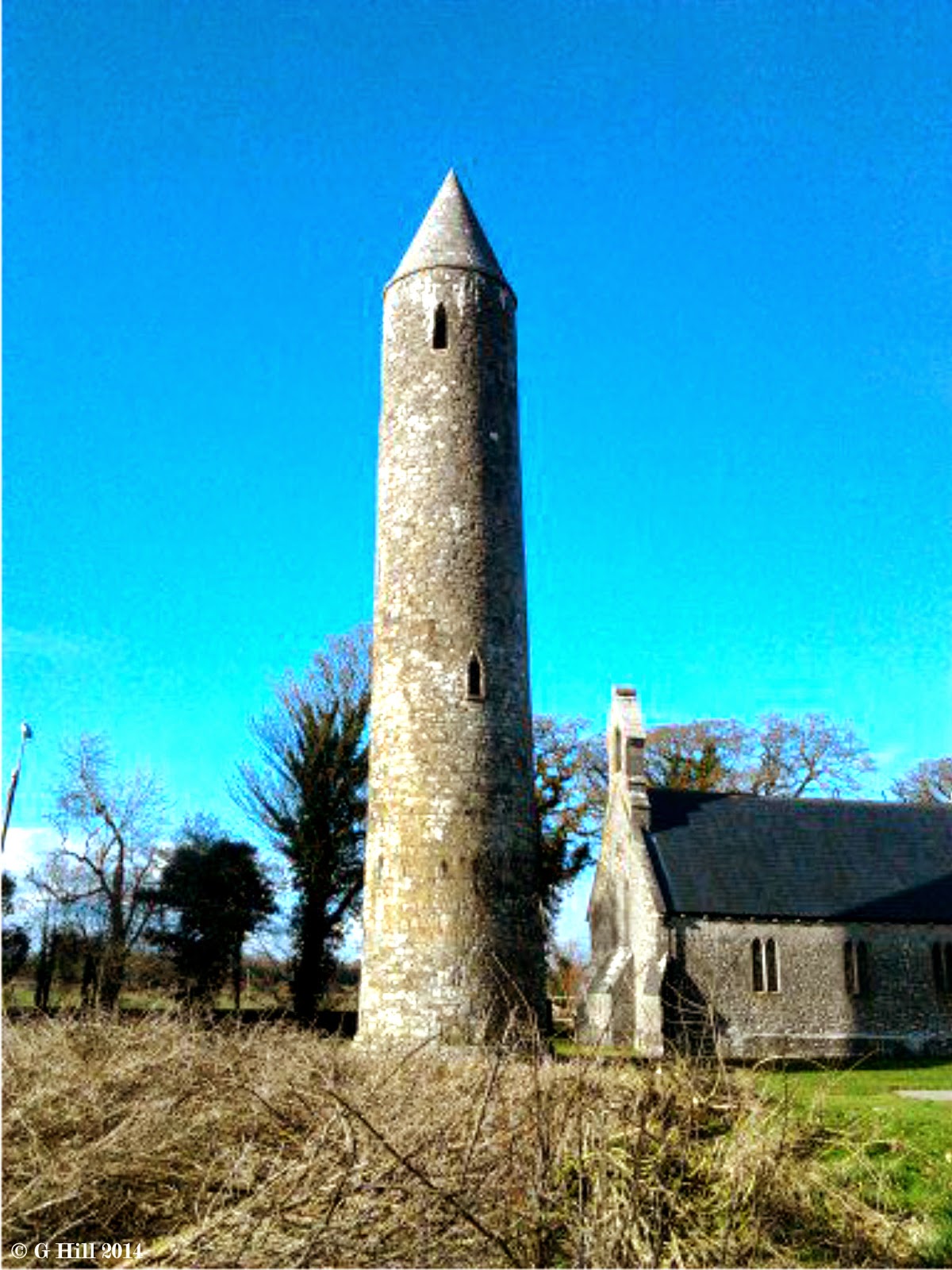 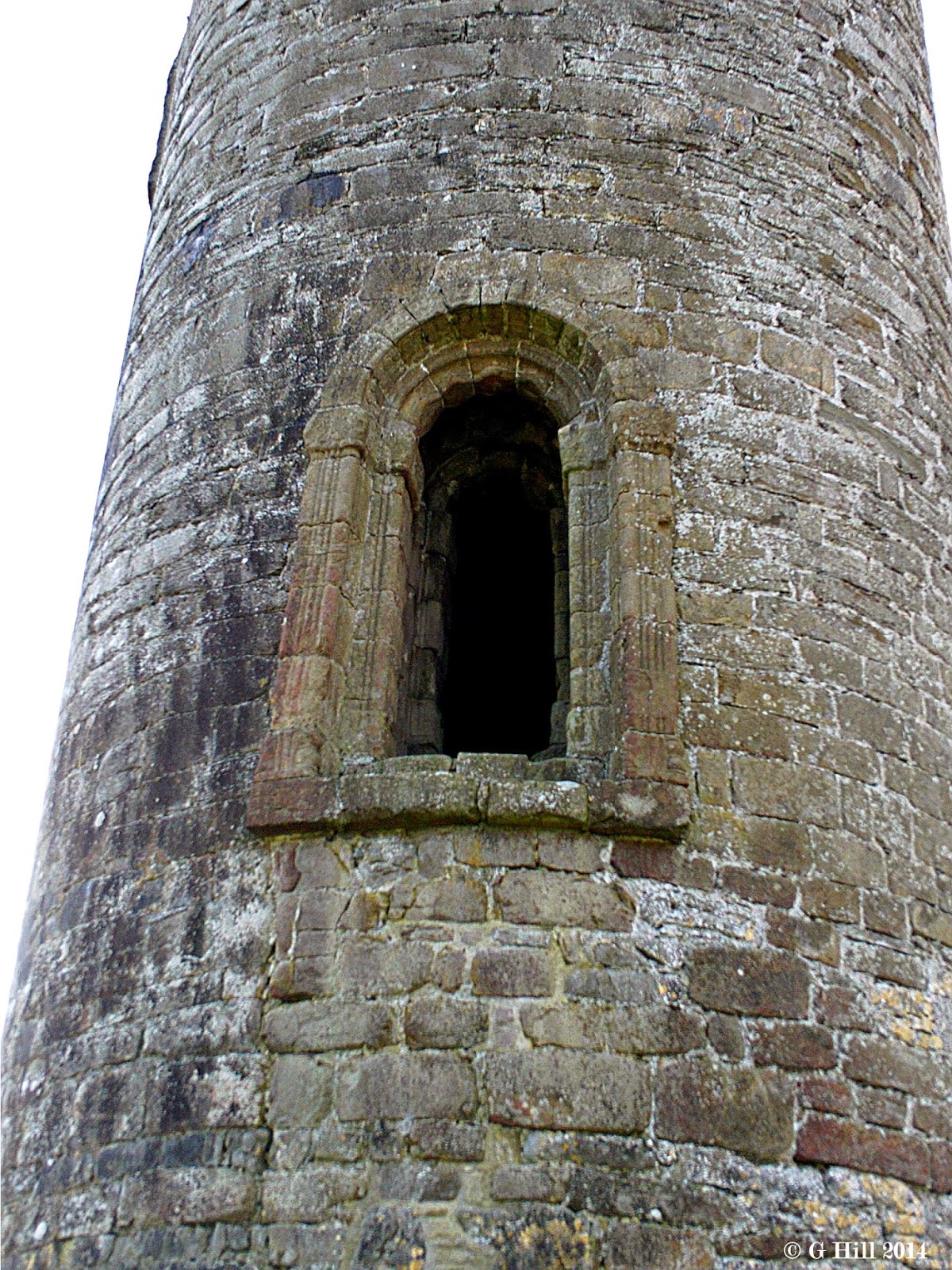 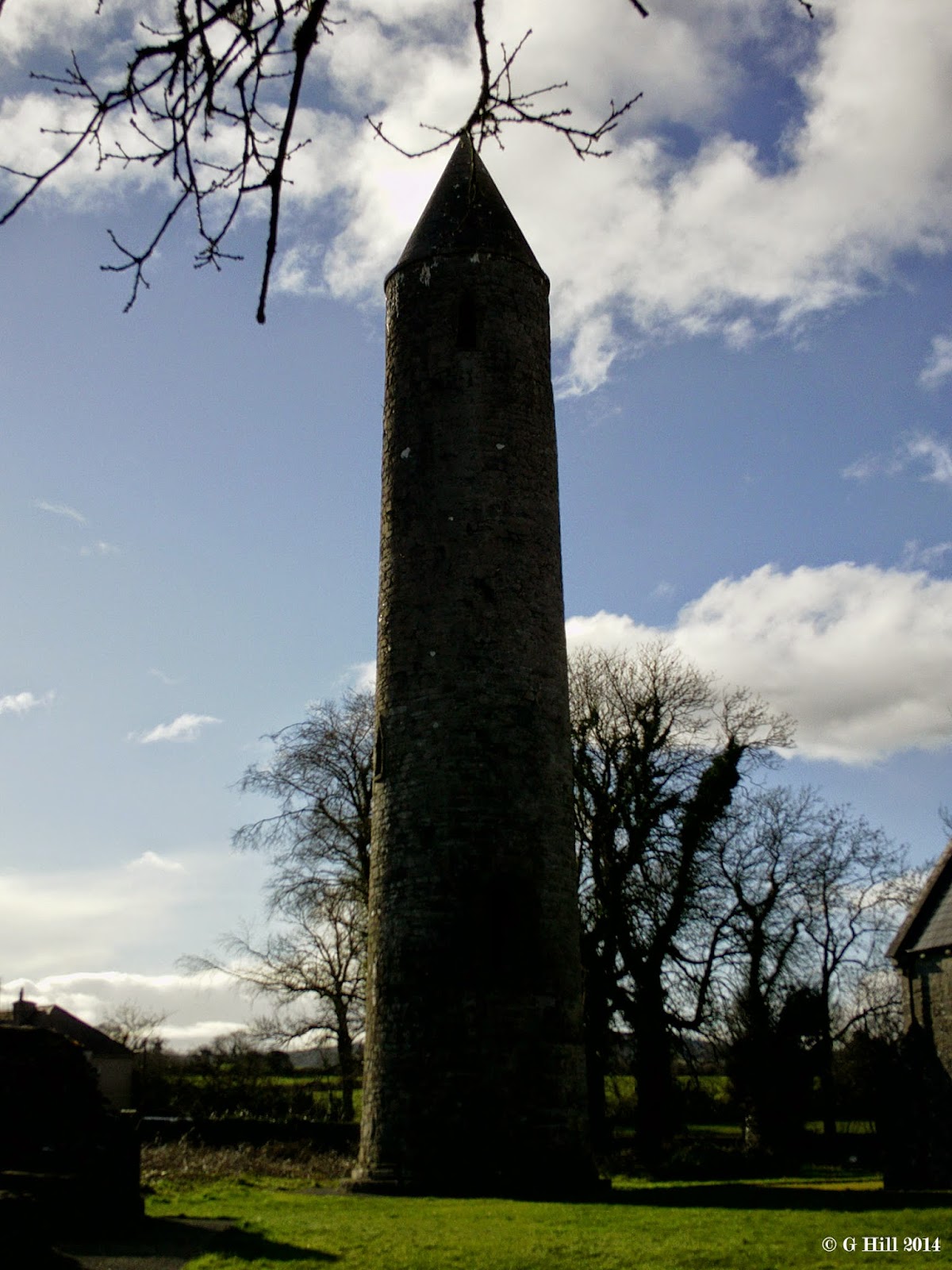 Above Image: Almost as if the tower had sprouted twigs! 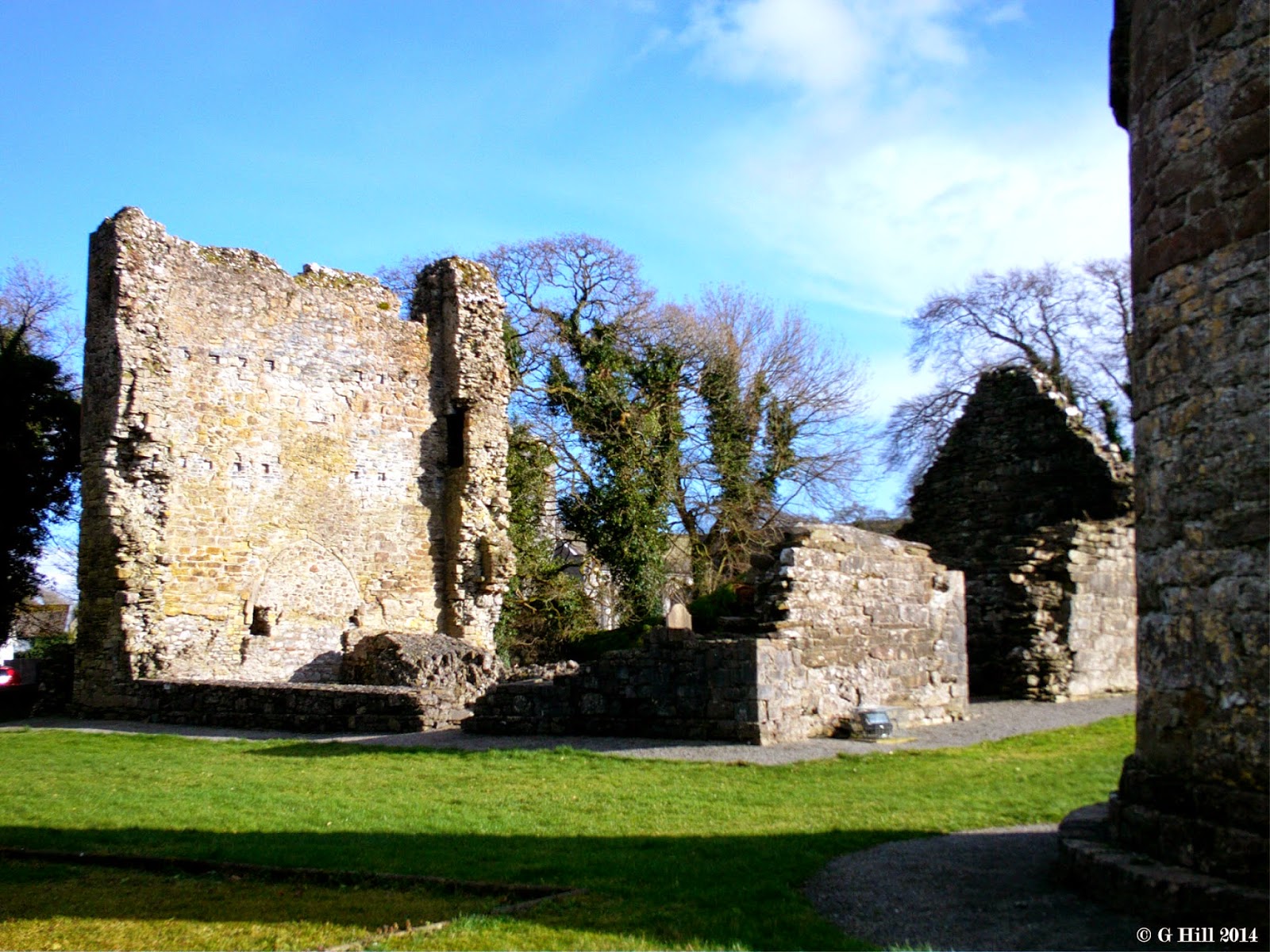 Above & Below Images: Remains of the Church/Castle 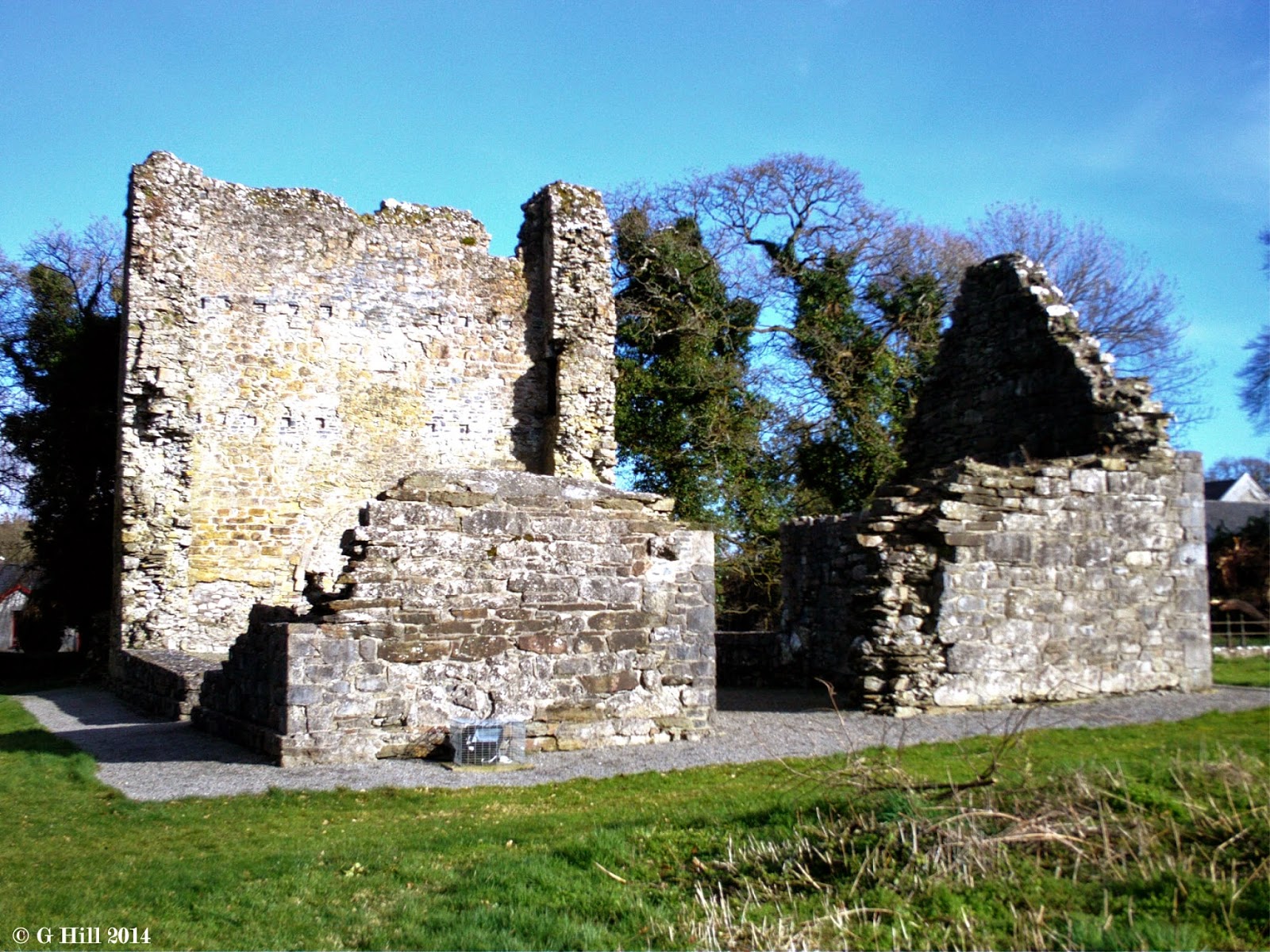 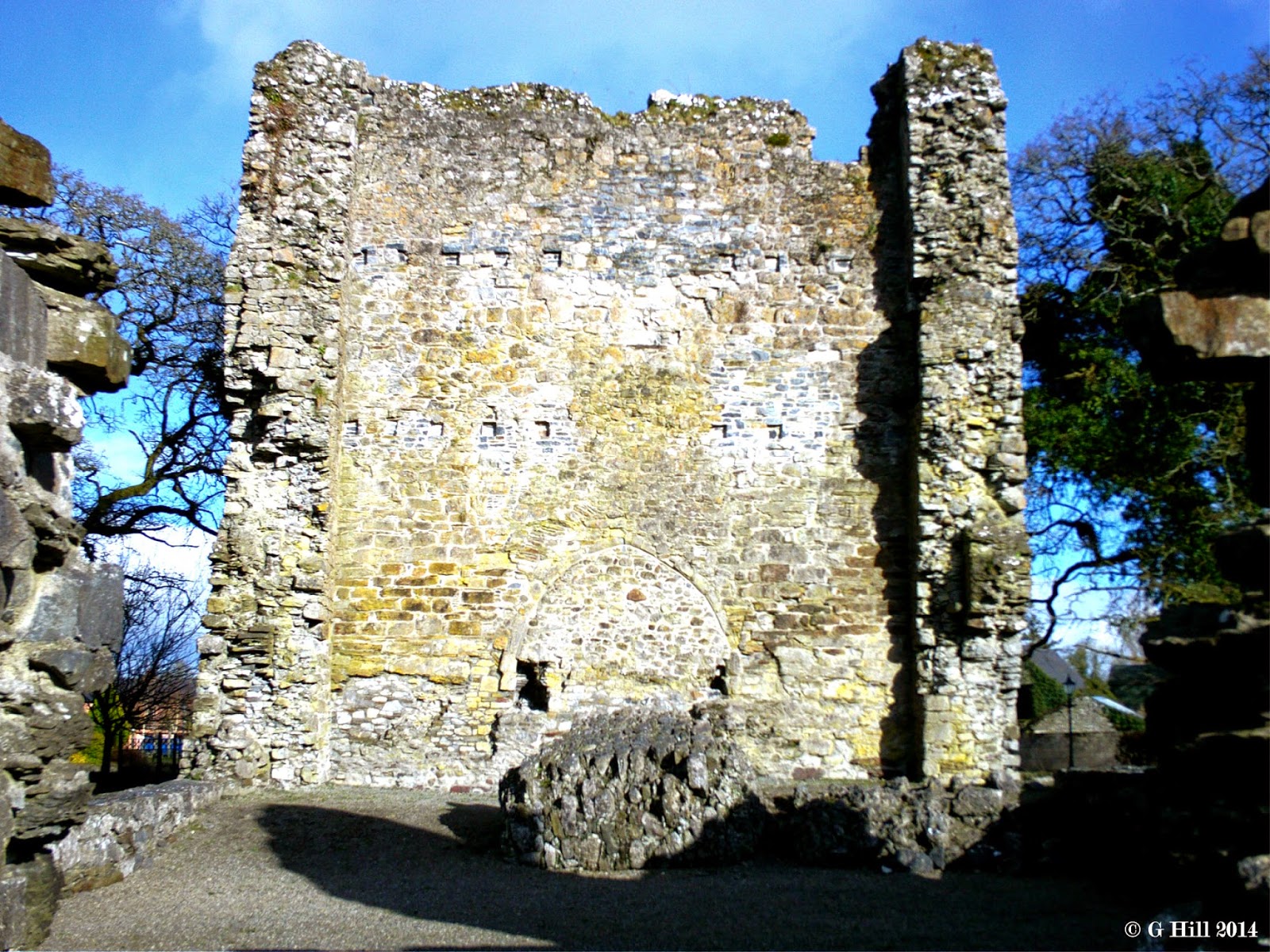 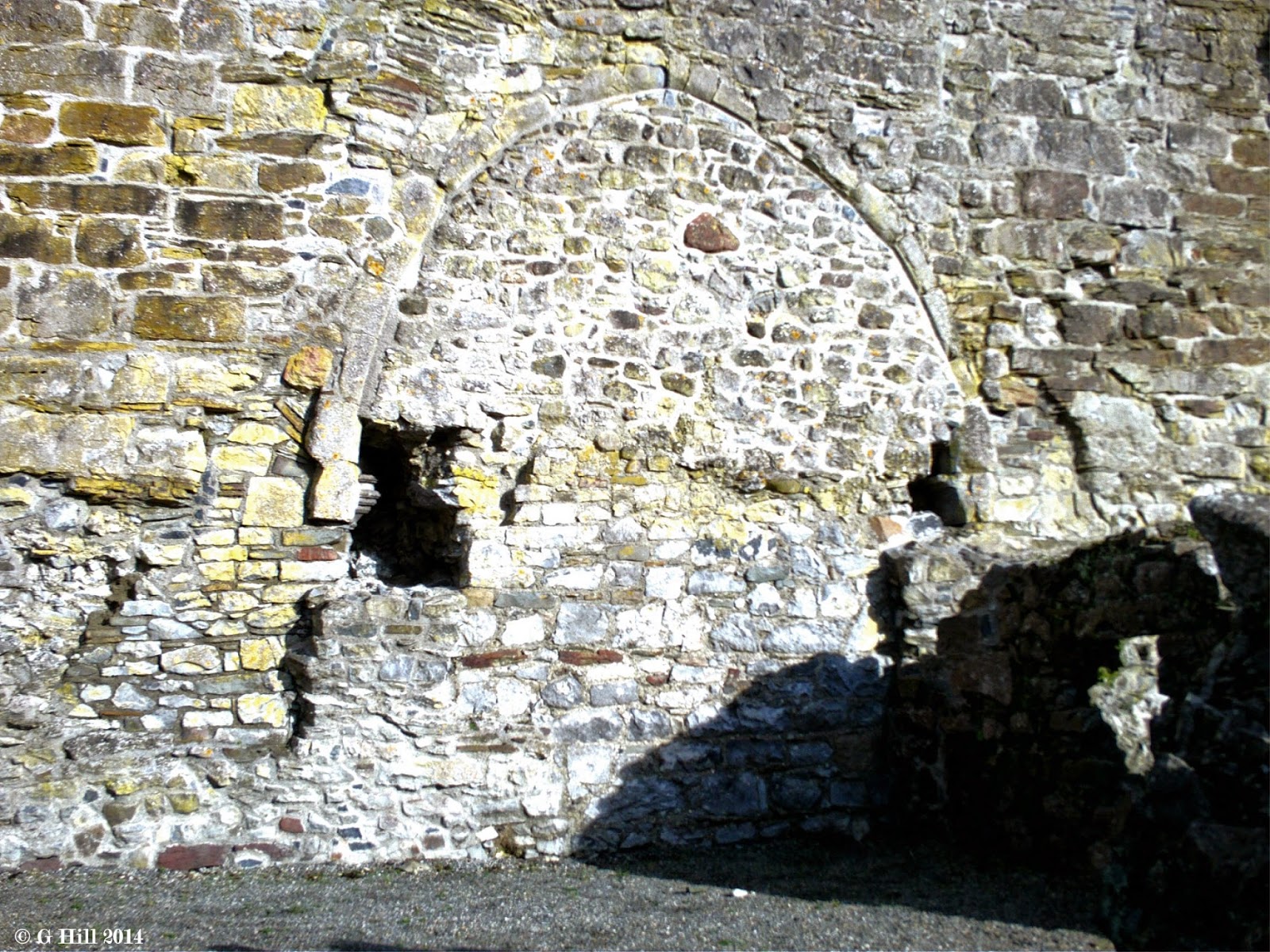 Above Image: The choir arch 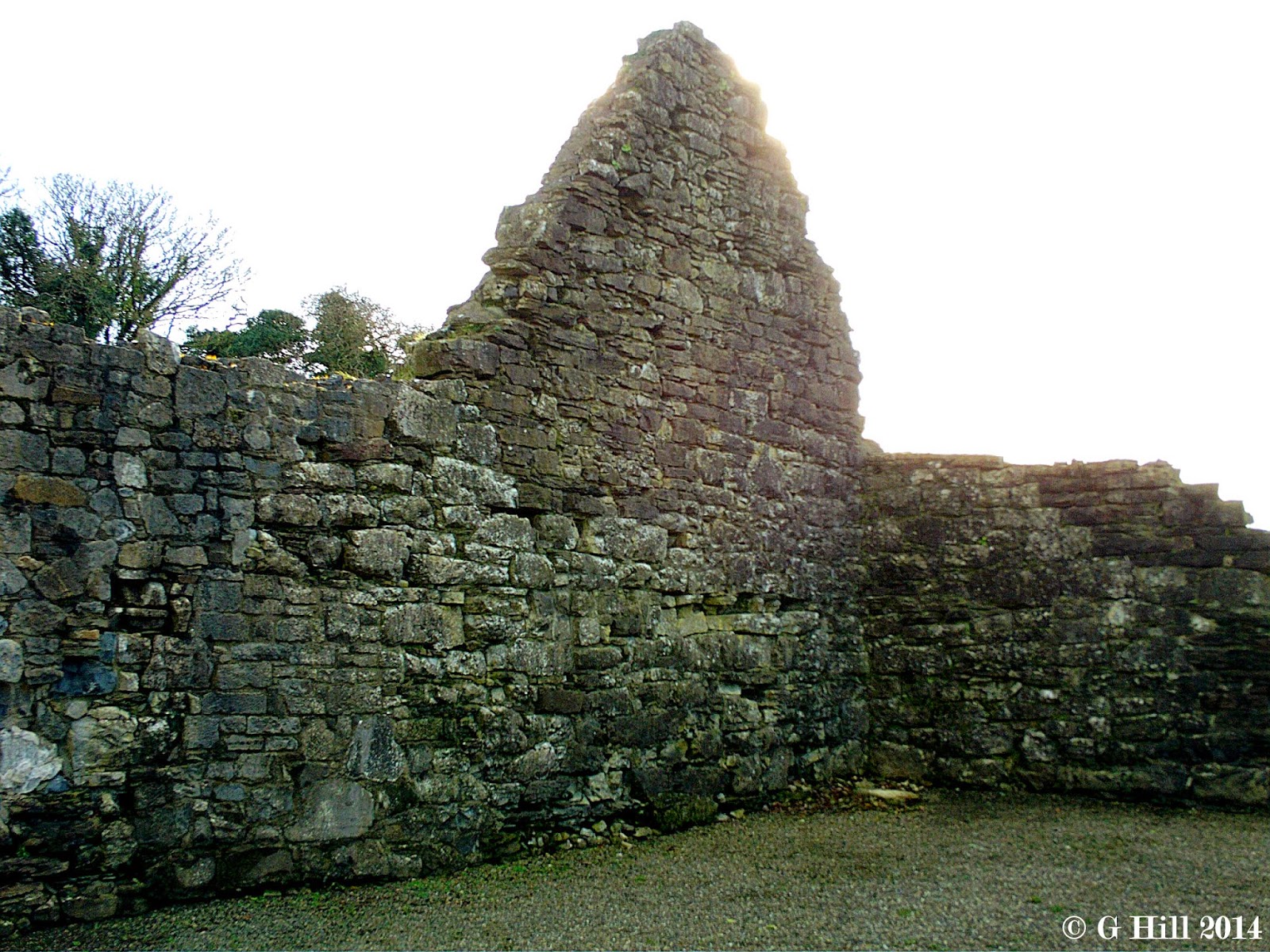 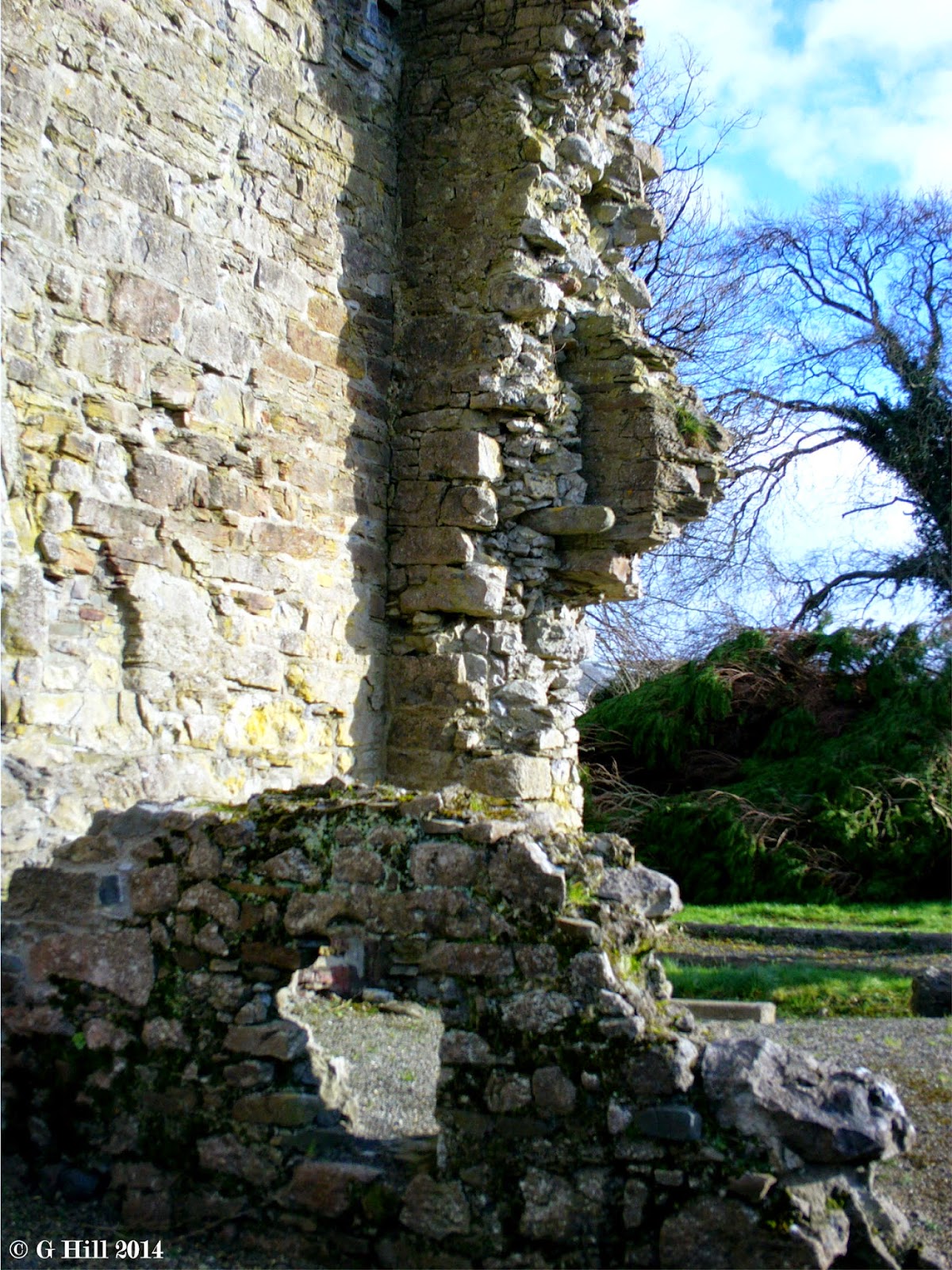 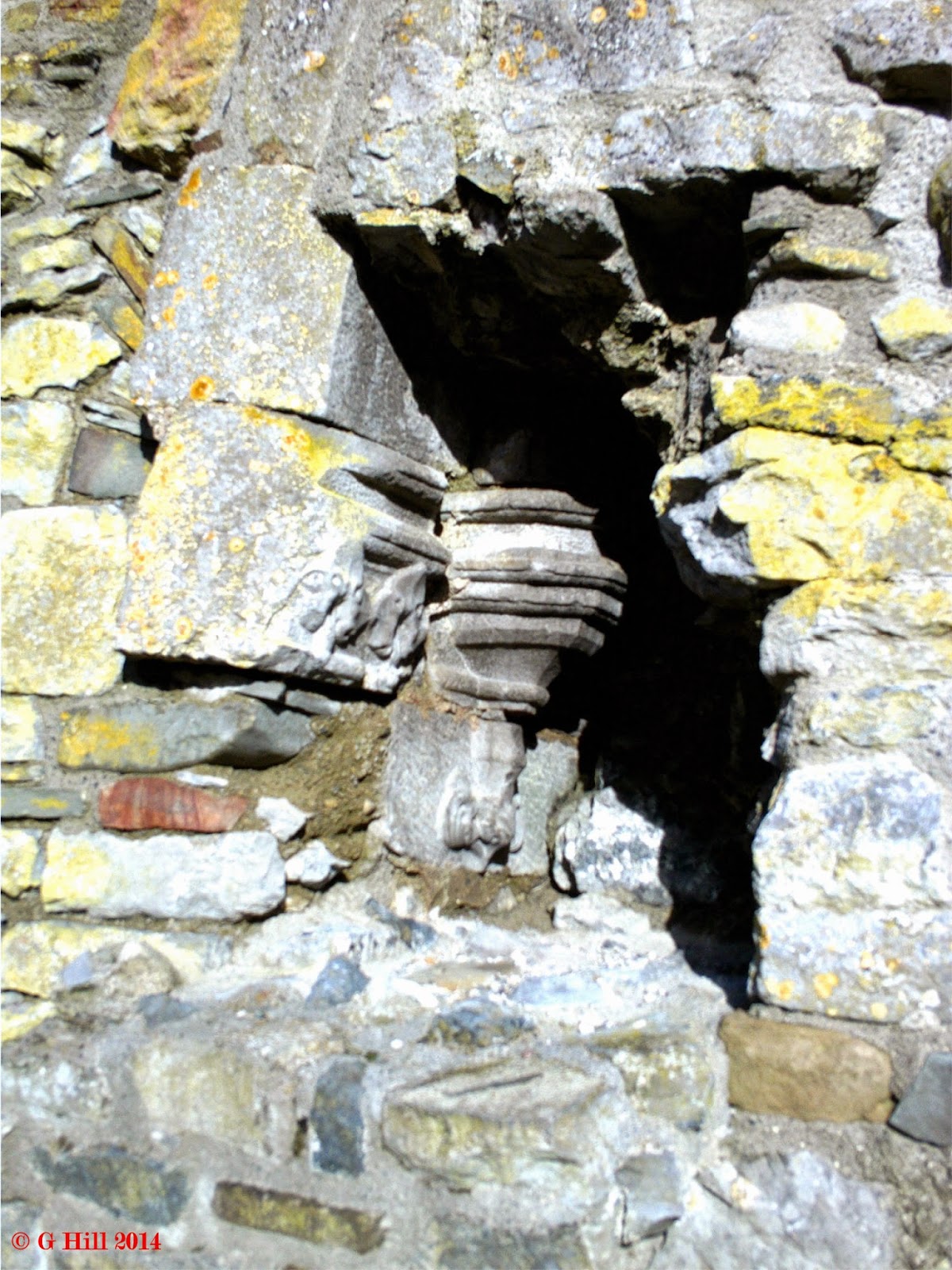 Above Image: Remains of a font? 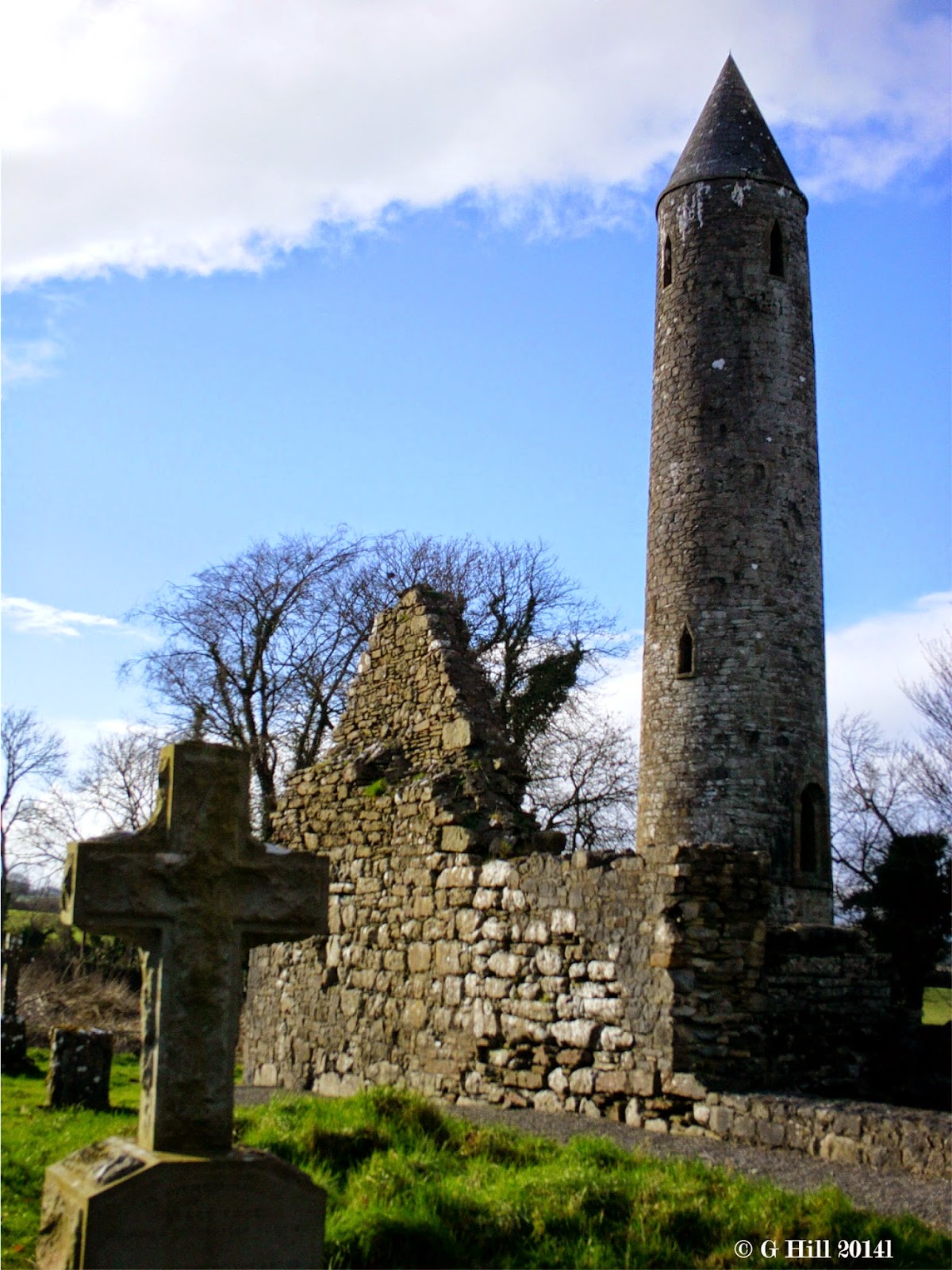 This monastic site was founded by St Mochua in the 7th century. None of the original monastery buildings survive after being seriously damaged in 1142 but the tall 90 feet tall round tower which was constructed in the 12th century remains intact and peeks above the trees on the skyline of the Village.
Access to the site is by way of a small footbridge over a stream into a secluded area. The conical roof remains atop undamaged making the tower a fine example of these amazing type of structures. There are four windows near the roof that face to all four compass points but most importantly a beautifully carved Romanesque doorway is situated approx. 14ft from ground level. This decorative doorway makes this tower unique in Ireland. The doorways on towers like these were placed high  mostly as form of protection. If under attack a ladder could be pulled up to deter the assailants.
A few yards from the tower a more modern Church building stands intact and has I’ve been told adapted into a library.
Adjacent South West to the tower are the ruins of a 15th century Church from a Franciscan friary constructed by the O’Mores. The friary was closed in the dissolution of the 1540’s. In the 1600’s the lands were passed to the Cosby family who were notable in the area and they went about converting the remains of the Church into a Castle complete with tower and bawn. Only partial remains exist today mostly of the East wall and a gable end of the Church. The East wall contains a choir arch which is completely blocked up.
The site sits in a very quiet spot in the village and has a very calm and peaceful atmosphere. When we visited there was just one other visitor who appeared to be a local walking his dog. Although the remains of the Church/Castle are scant the tower really makes a visit worthwhile.
To find the ruins, take the M7 Dublin to Limerick motorway and exit at junction 16. At the roundabout at the top of the exit ramp take the second exit and drive for approx. 4.5KM until you reach a T-junction with the N80. You will pass by the Rock of Dunamase on your way (see earlier post). Turn left onto the N80 and drive approx. 3KM until you reach Stradbally. In the Village take the right hand turn opposite the “Daniel Dunne” pub. Drive for approx. 8KM until you reach the crossroads in Timahoe Village. Drive ahead through the crossroads and take the first left turn. Once around, the road forks. Take the right hand fork and a few metres on you will spot the small footbridge crossing the stream. You can park safely along here.
Posted by Castlehunter at 10:56