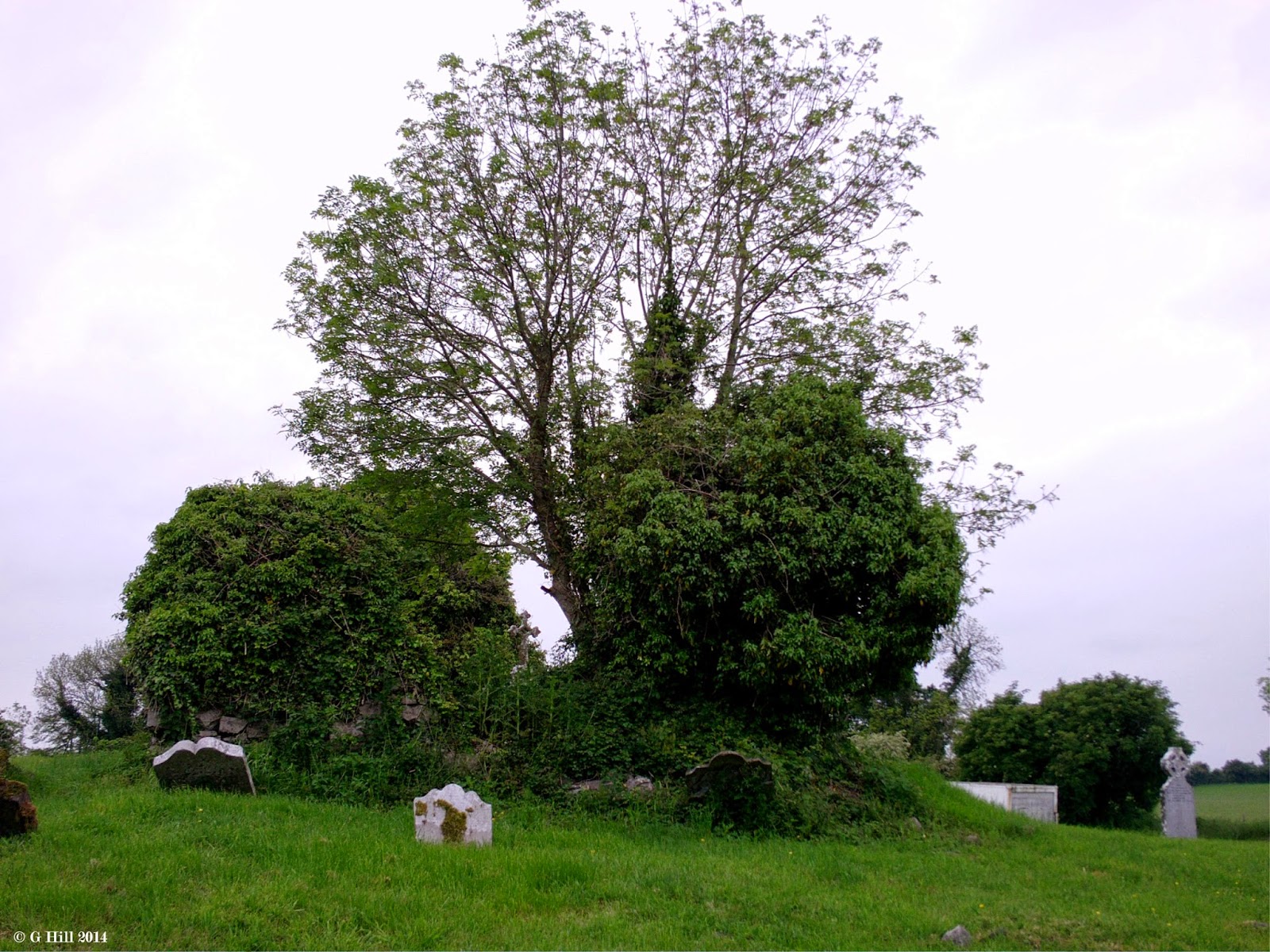 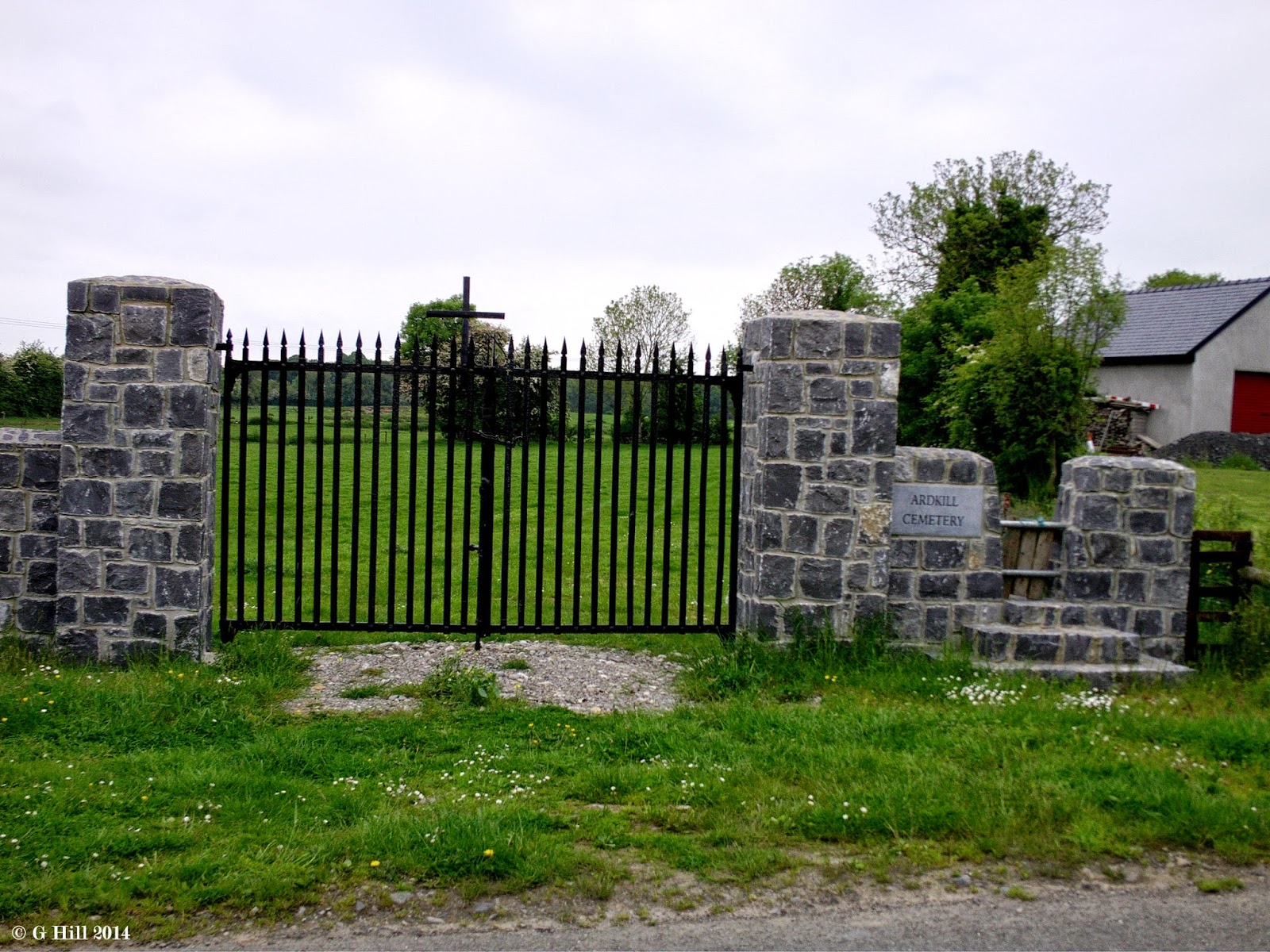 Above Image: The new roadside gate 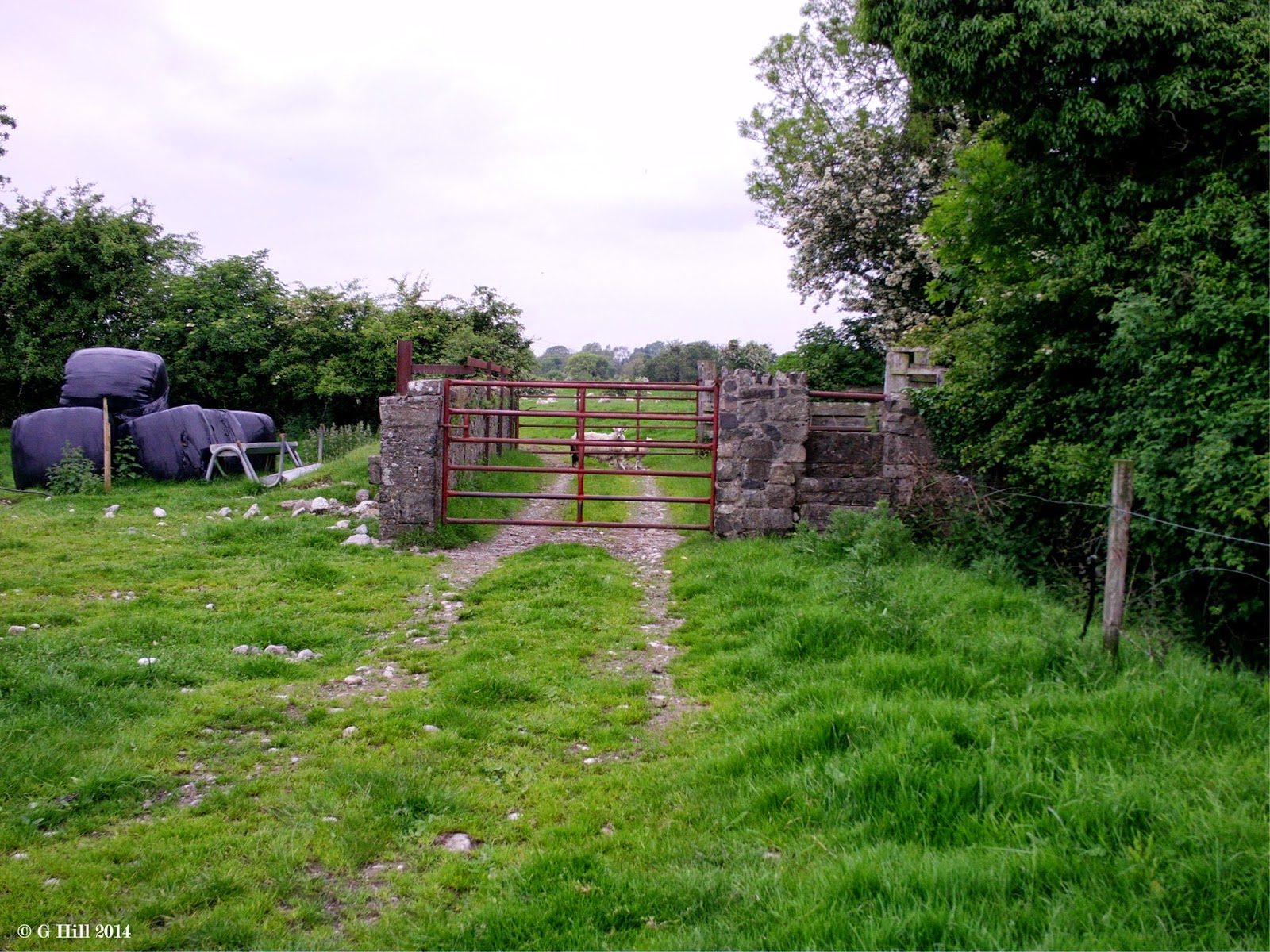 Above Image: The second stile (to right of gate) 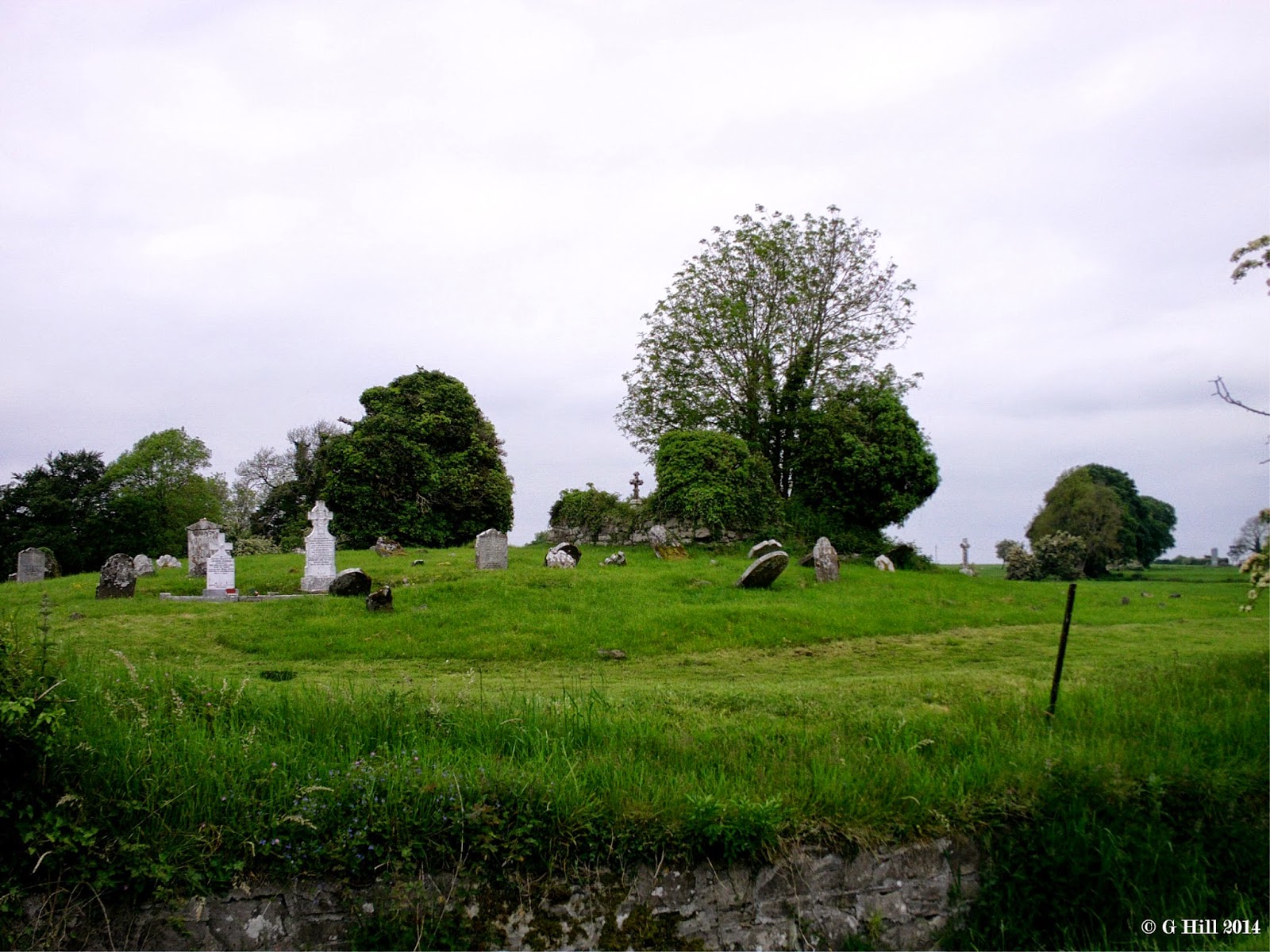 Above Image: The walled enclosure 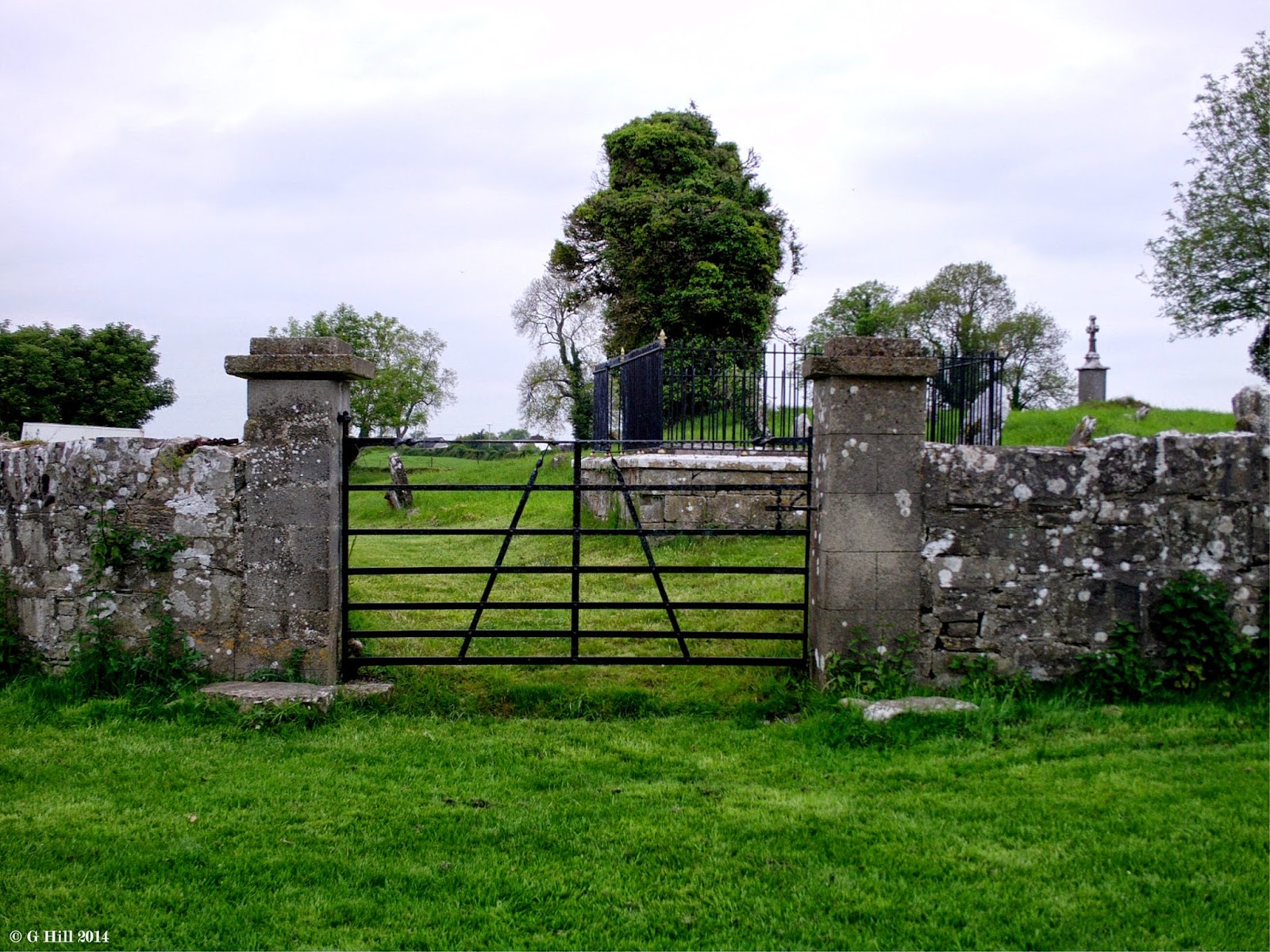 Above Image: The enclosure gate 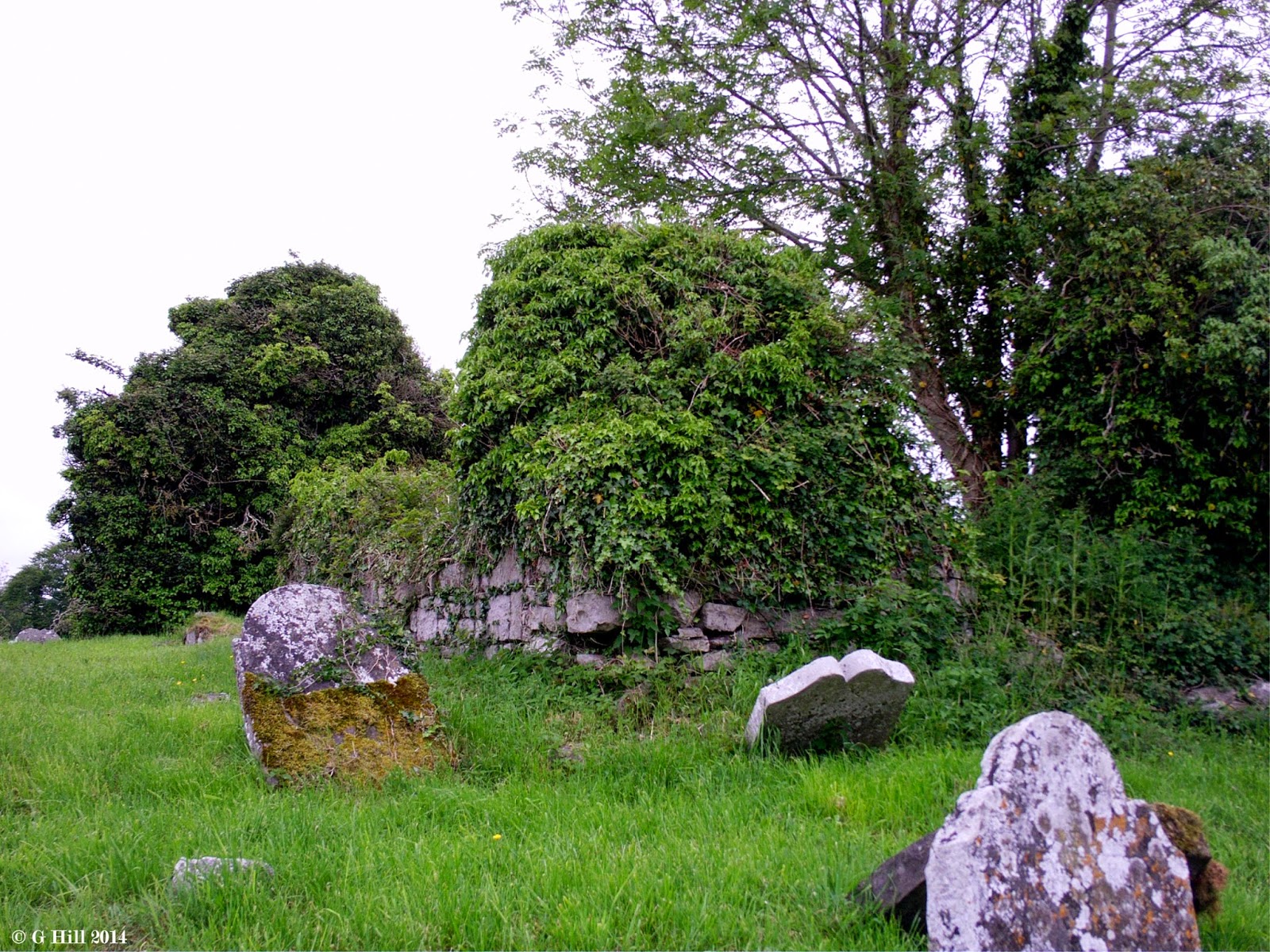 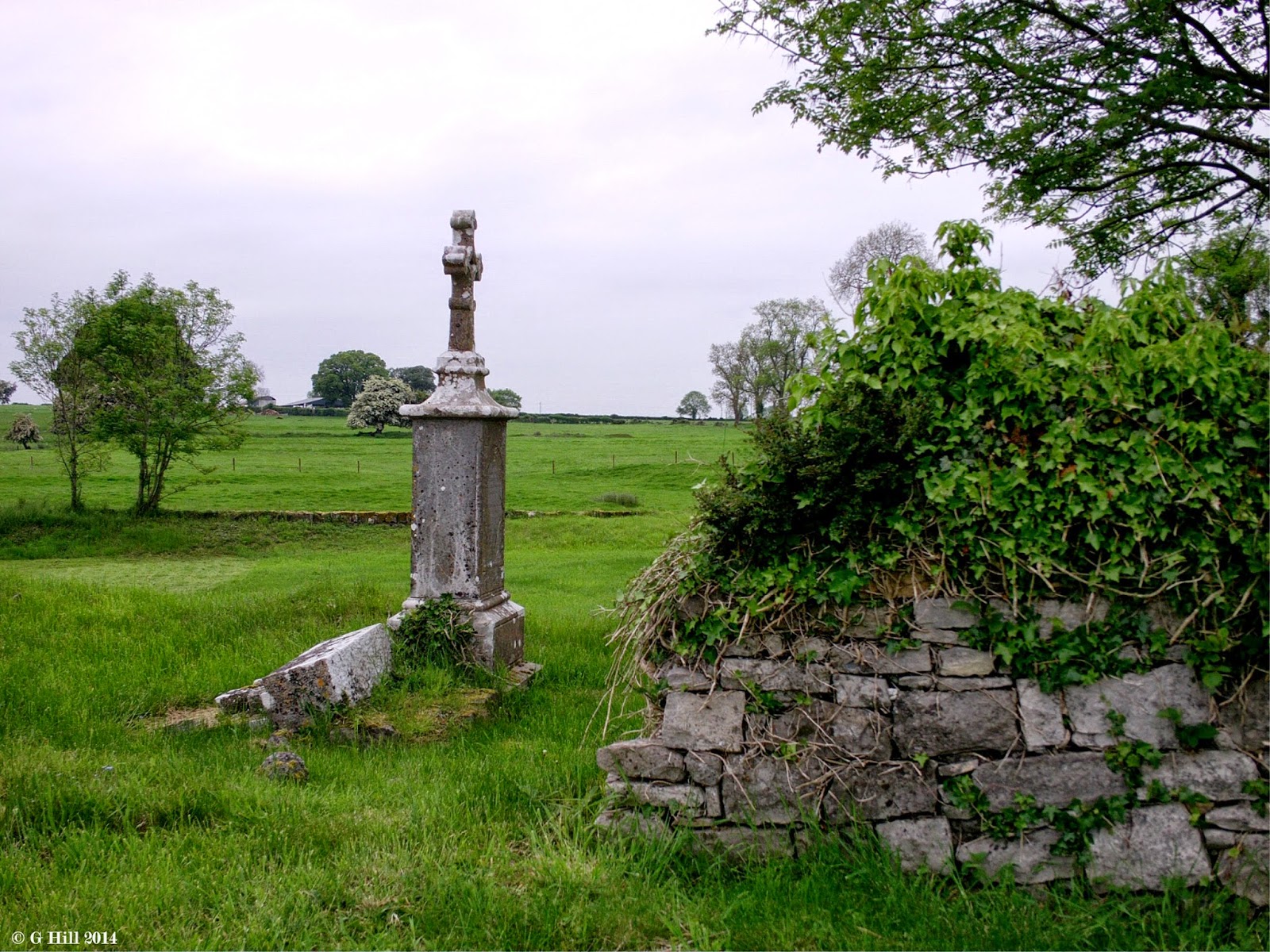 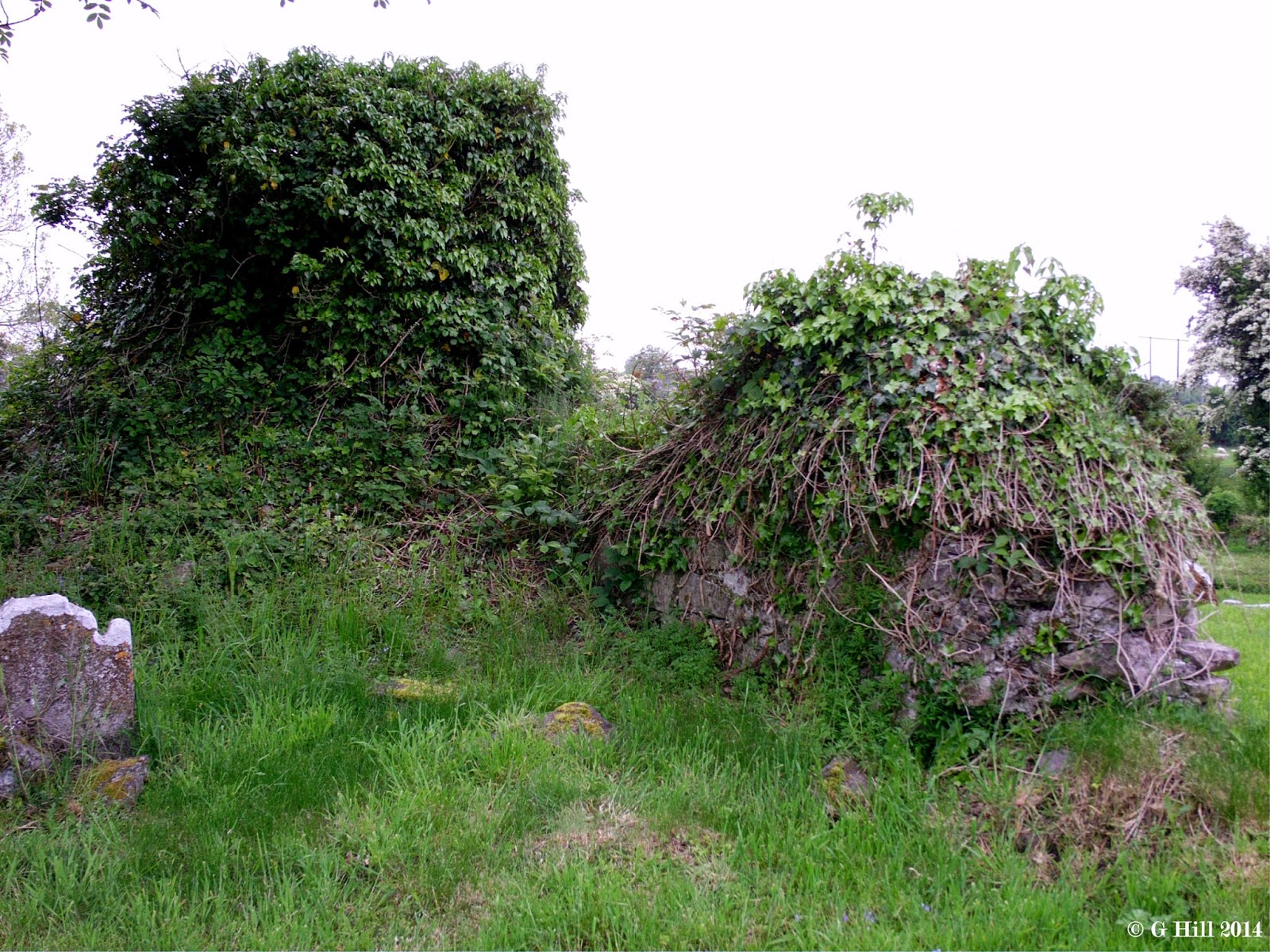 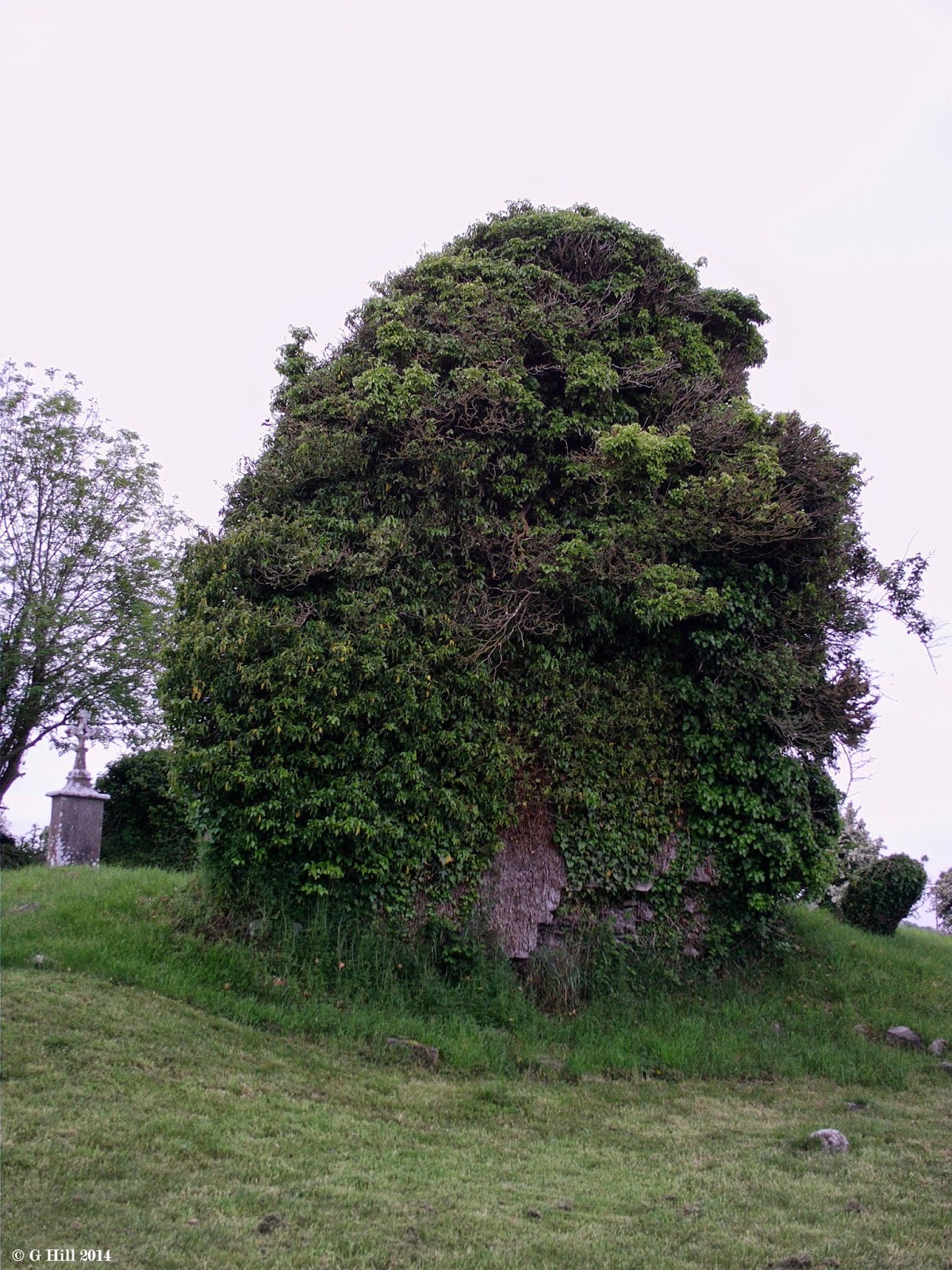 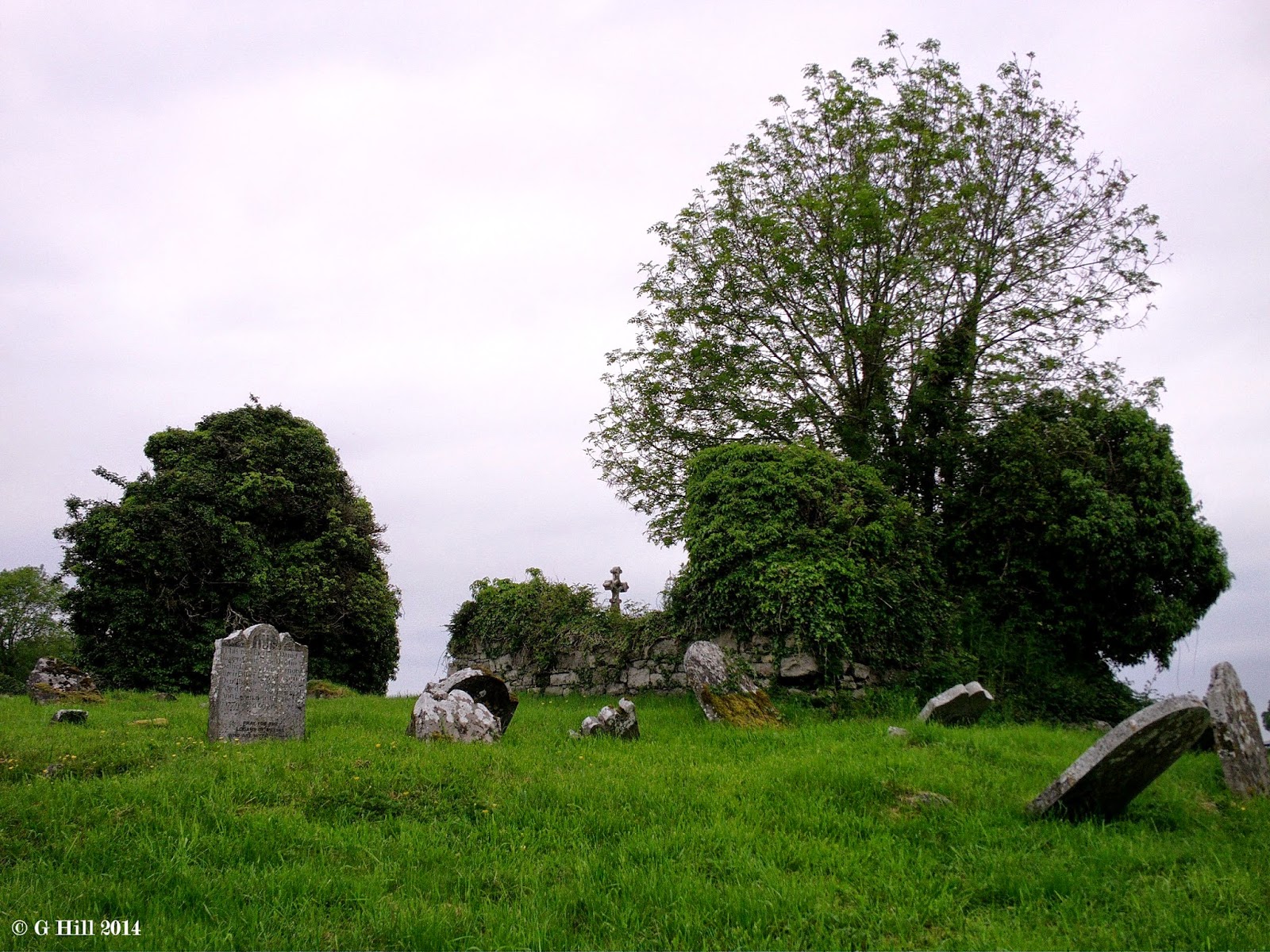 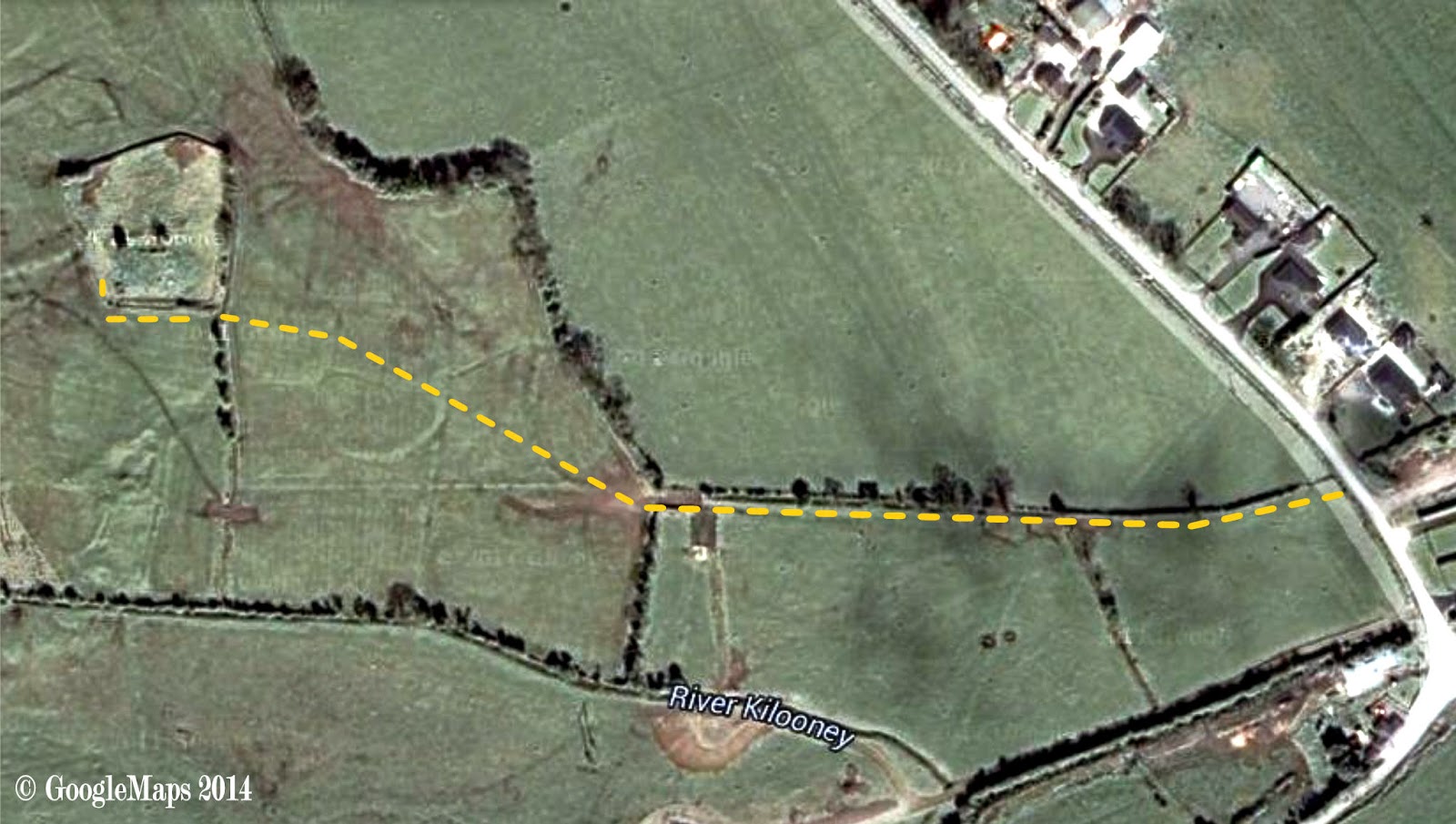 Above Image: Route from the road to enclosure

You’ll need some good walking boots for this one. The medieval Church of Ardkill (meaning High Church) lies in the Townland of the same name and requires a bit of a trek to find it. The first indication of its existence is a gate with a cross on it at the roadside which now has a brand new stile attached. From here it’s a walk across three fields and over another stile before you spot the walled enclosure around the ruins. This route may have originally been a Mass path for Churchgoers. The last of these fields has a cattle enclosure and a stile to cross. When we visited, the last field was chock full of Sheep who moved in great waves as we approached and at least two rams were giving us the beady eye. Just as you reach the enclosure wall you have to cross a small ditch which even on a sunny day still manages to retain some water. There is a gate in the enclosure wall on the South west corner which has a spring loaded catch which nearly took my finger off so be wary of this.
What remains of the Church is unfortunately mostly hidden by vegetation but it appears both gables are standing and partial amounts of the South and North walls. The Church would have measured approx. 21m x 10m. The ruins are situated on raised ground within the graveyard which is pretty uneven and they would probably look more dramatic if the ivy was cleared. The Kildare burial grounds survey documents that the East gable is buttressed but it’s not very evident with the overgrowth. There are a number of 18th century interesting grave markers scattered around.
It’s a long trek for such scant remains but there is a very remote, windswept and historical atmosphere to the place. There are also, a couple of fields further on, the partial remains of a Castle tower. This can be spotted from the road as you approach the roadside stile that accesses the mass path. We decided on this visit to pass on that viewing as we had pretty much enough of the smell of country air!
To find the ruins take the M4 junction 9 exit. At the top of the ramp take the R402 exit of the roundabout for Edenderry. Drive a short way to the next roundabout and take the 2nd exit continuing on the R402 toward Edenderry. Pass through the Village of Johnstown Bridge and drive for approx. 6Km until you reach a small crossroads with a white thatched cottage on the right. Turn left at the crossroads and drive for approx. 900m and keep an eye out on your right for a field gate with a cross on it and a stile adjacent. You can park on the grass verge opposite. Once over the stile follow the line of the hedgerow on your right and you will find the right route.
Posted by Castlehunter at 11:53