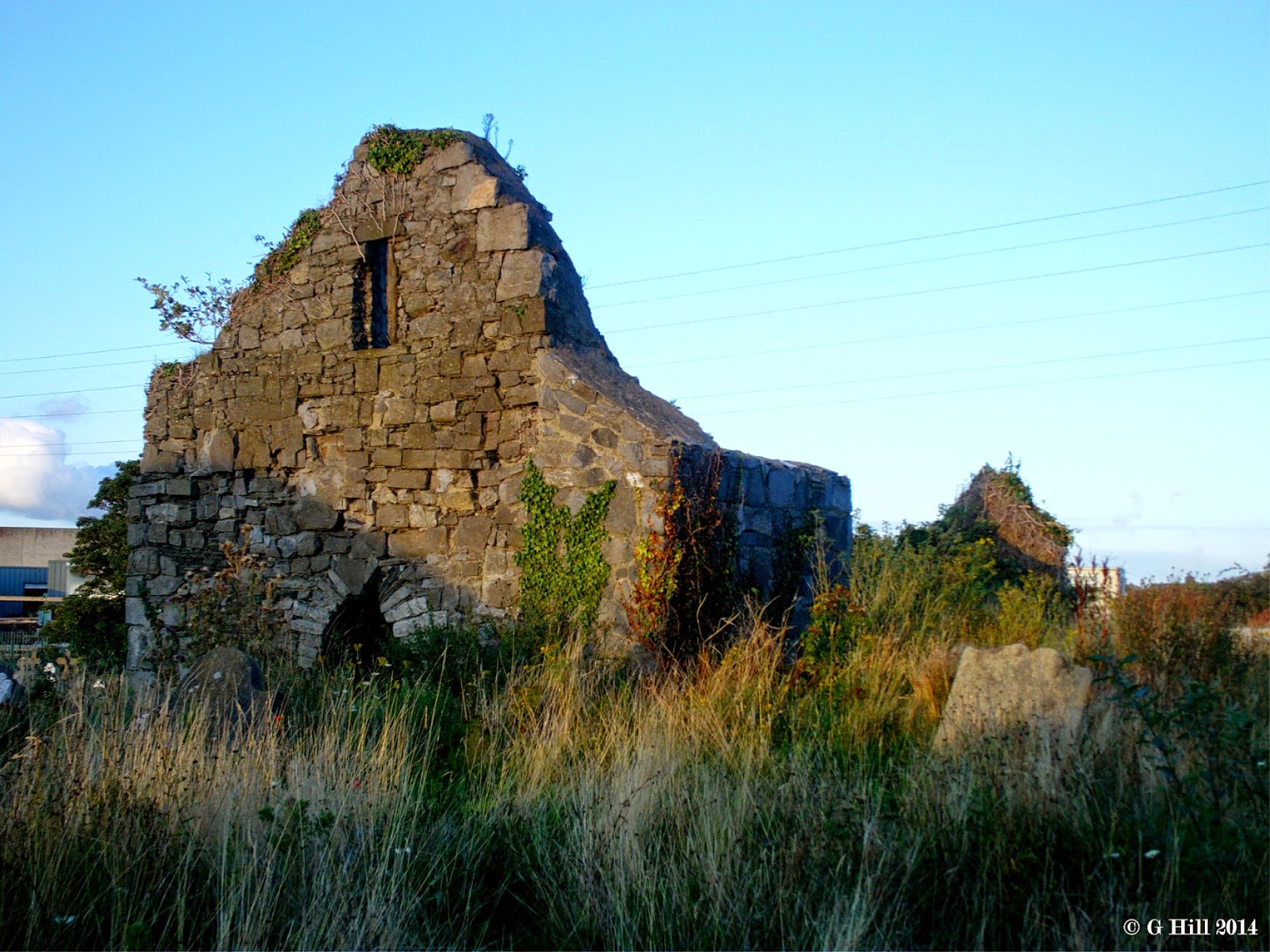 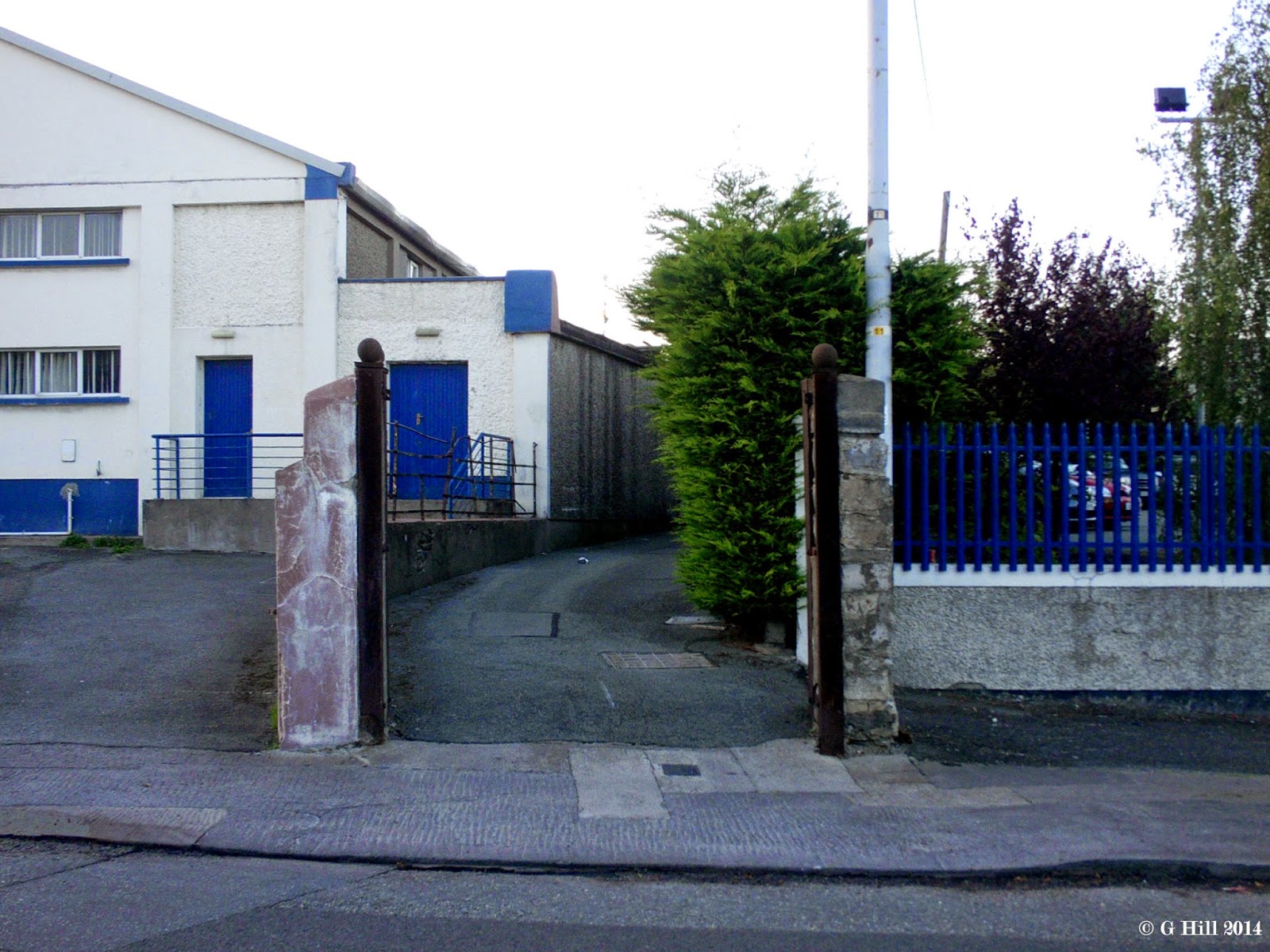 Above Image: The entrance lane way 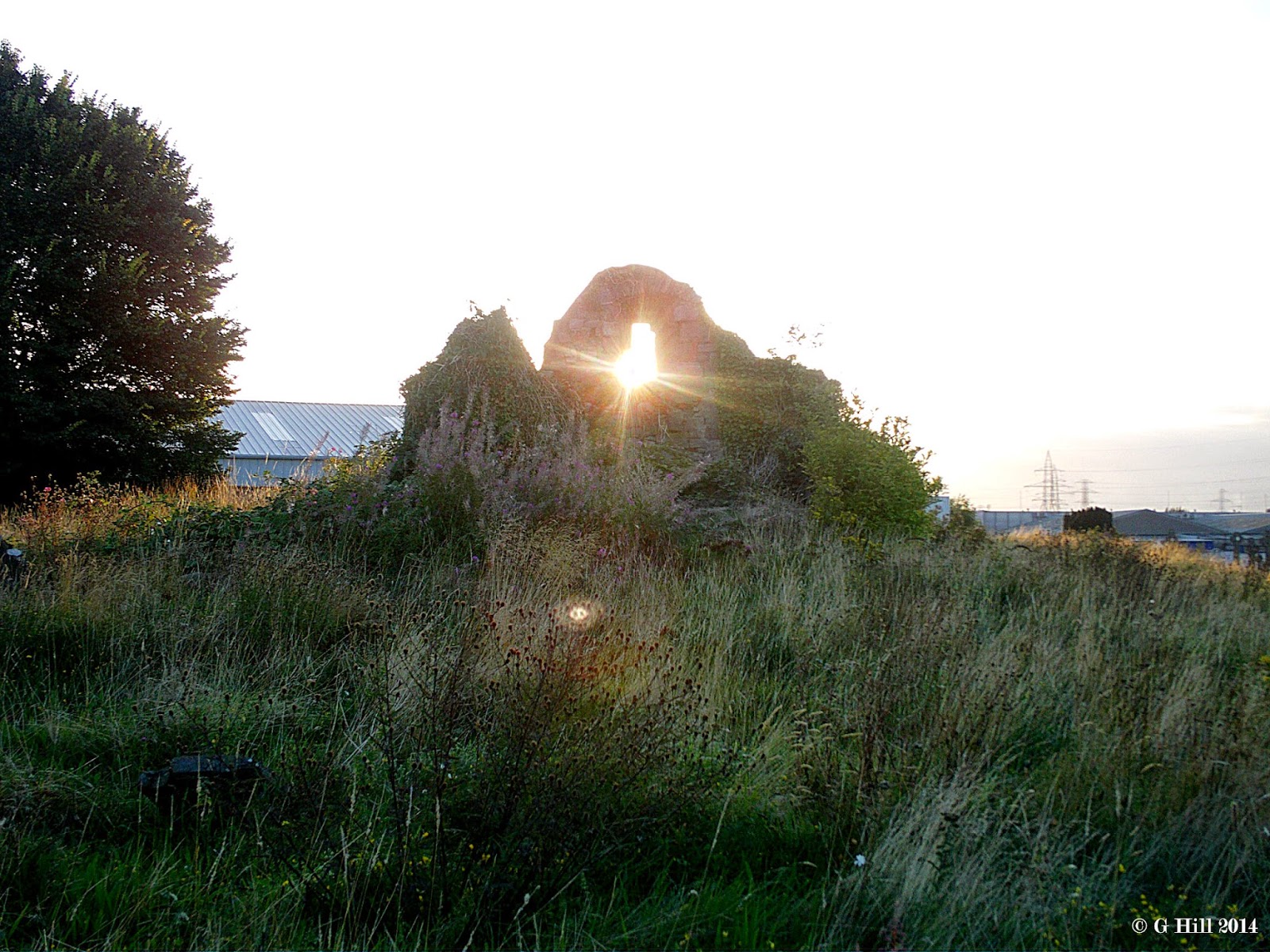 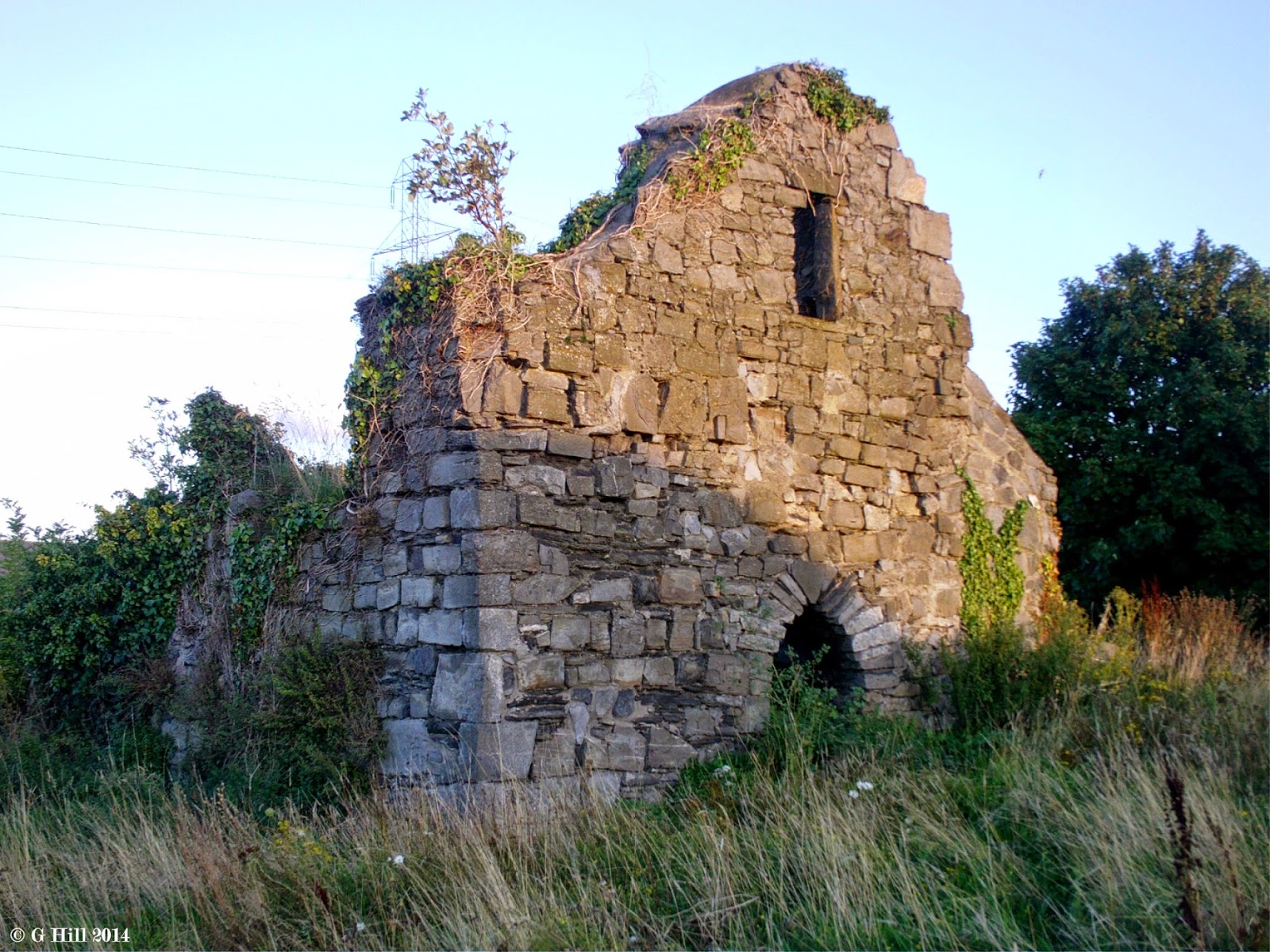 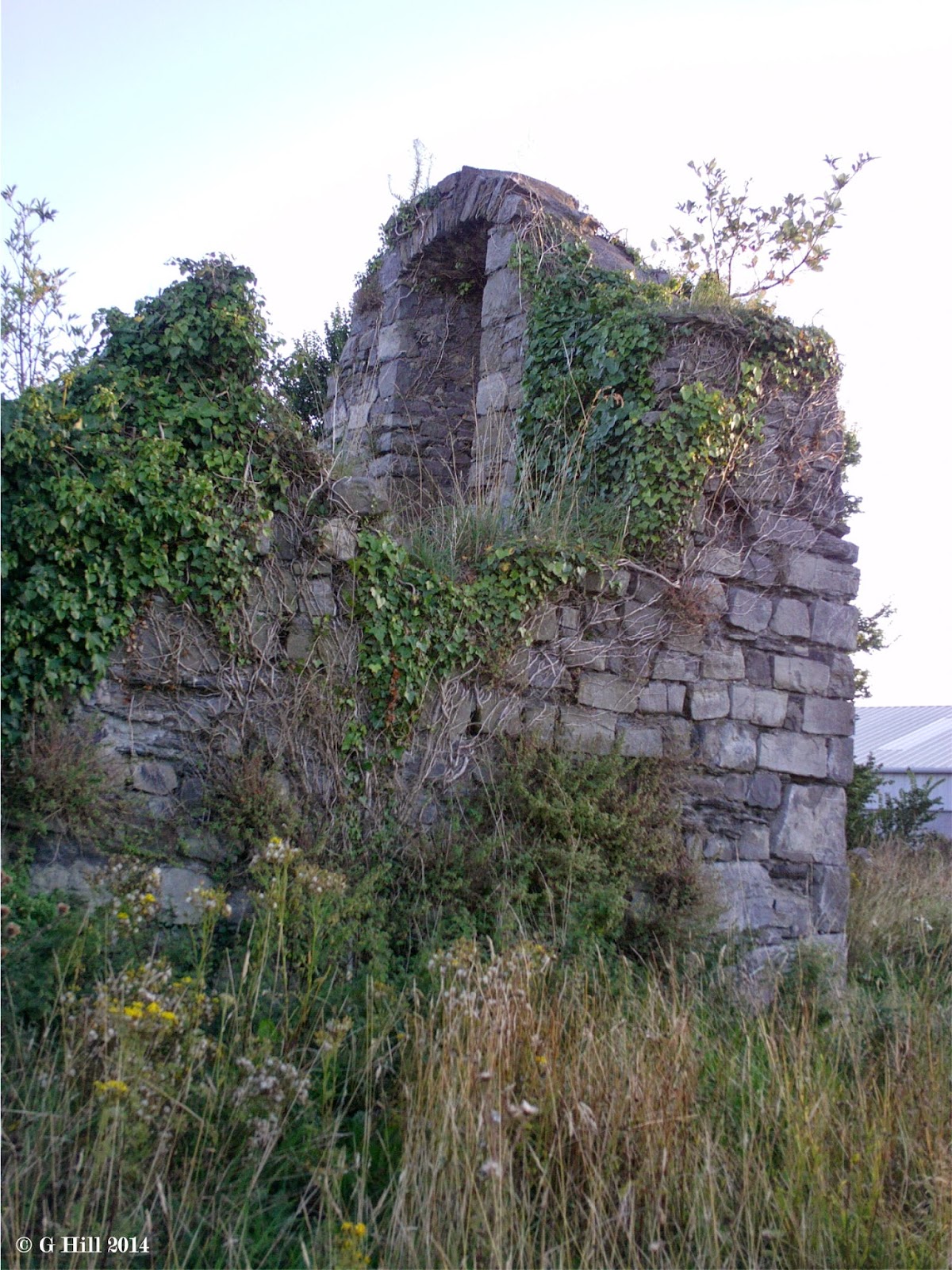 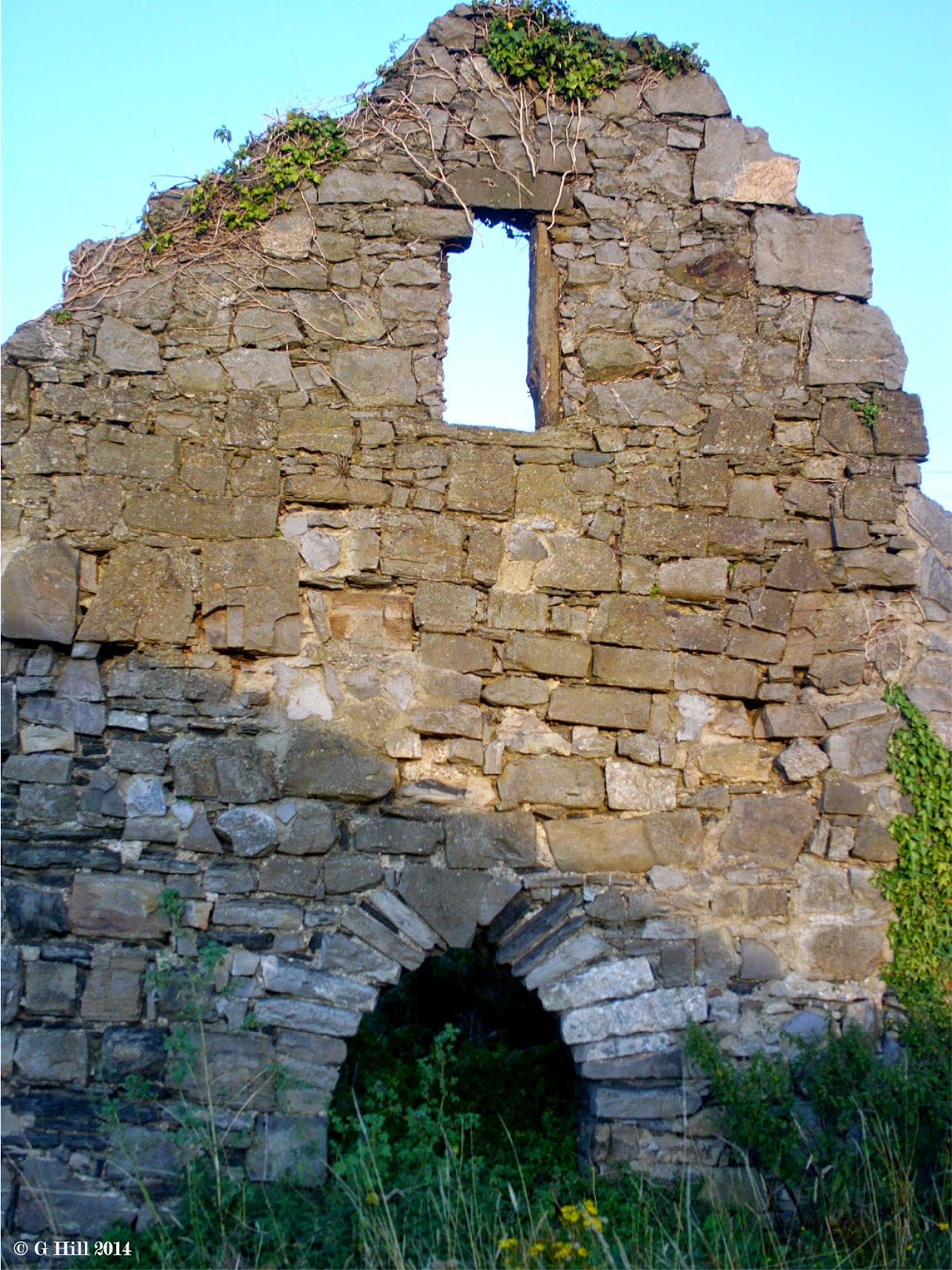 Above Image: The West gable doorway and window 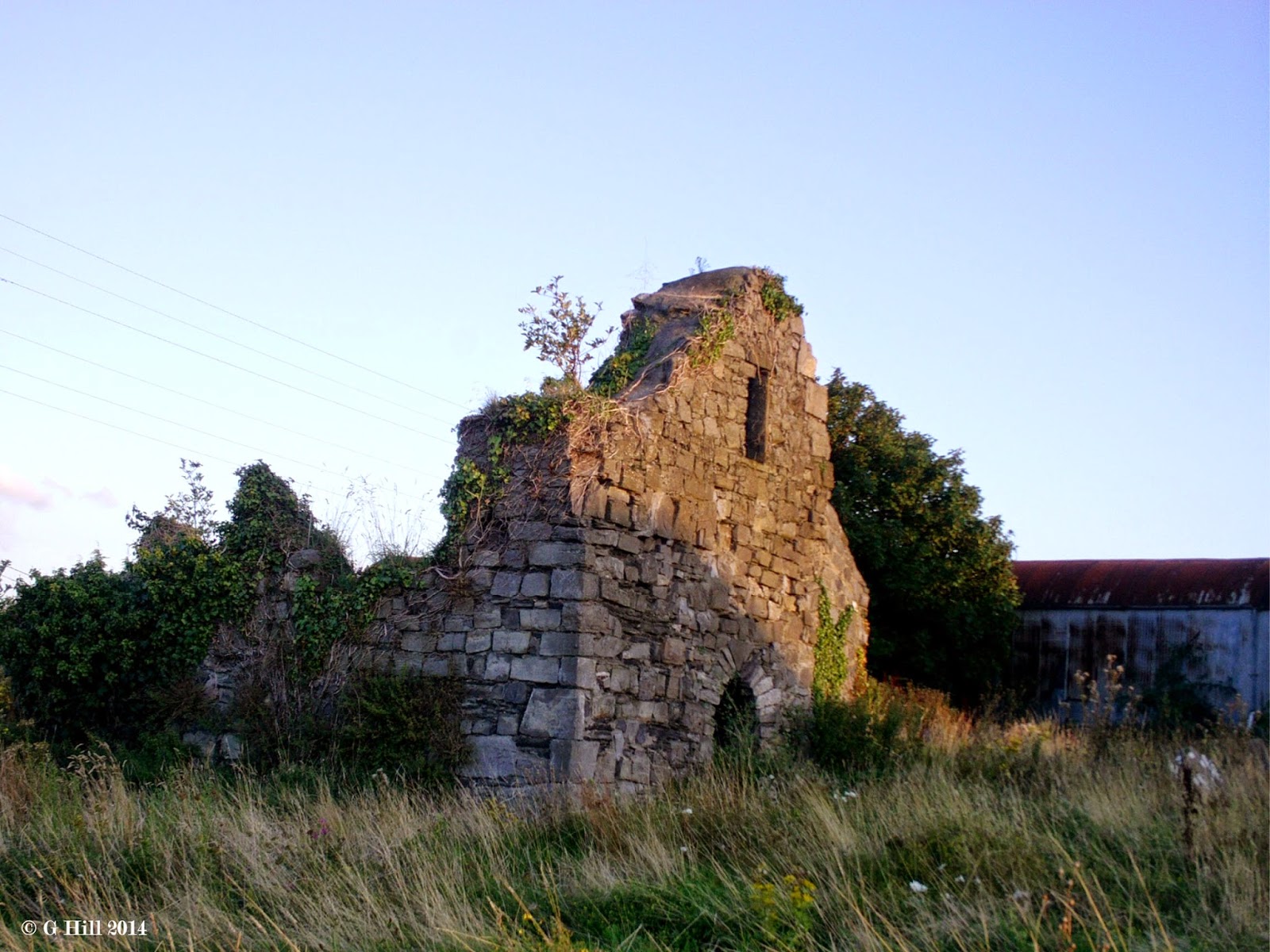 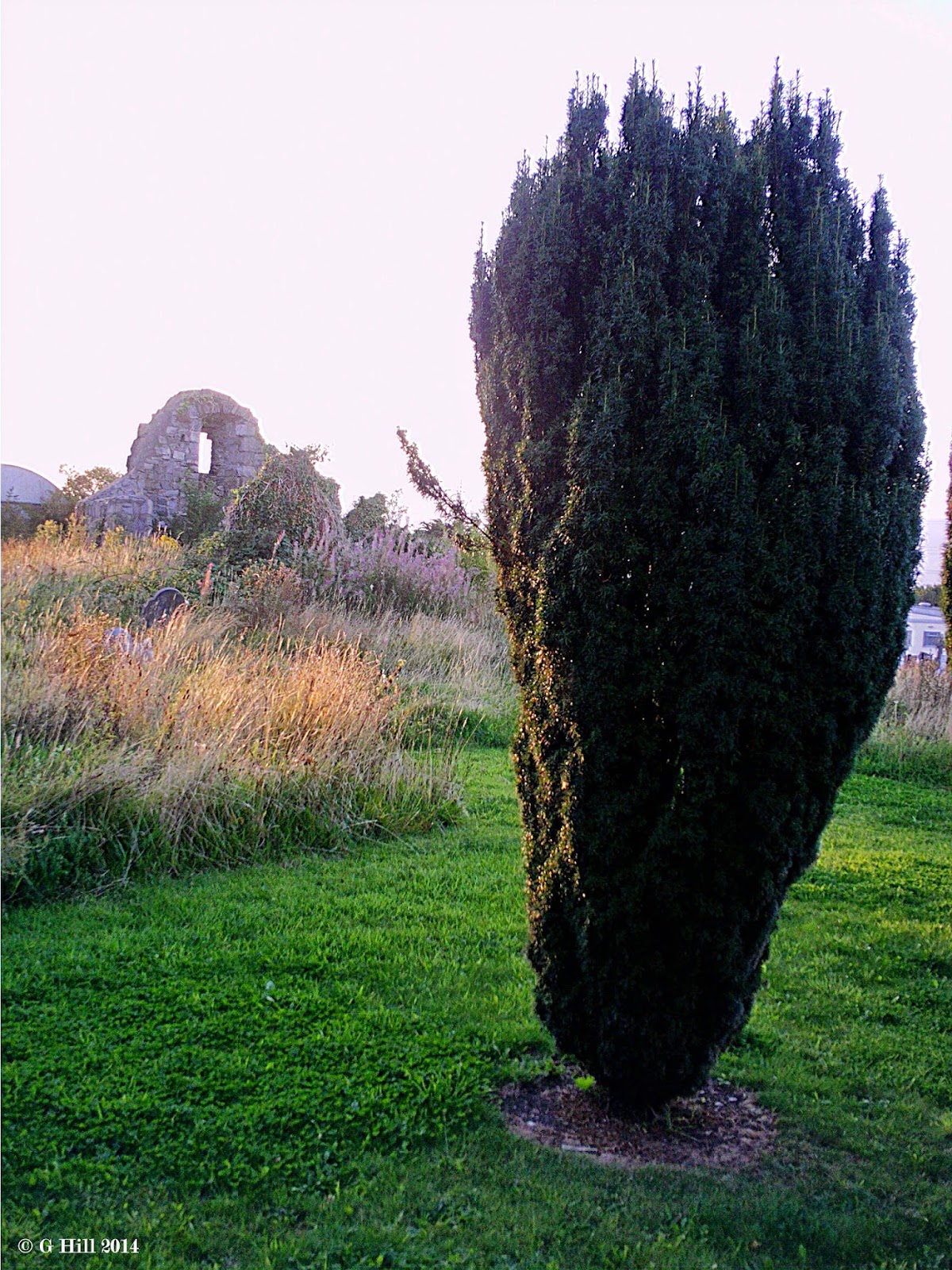 This small medieval ruin dates back to 1254 and was originally the parish Church for the Drimnagh Castle an estate owned by the Barnwalls. The Church measured 27ft x 18ft. It seems to have been in use at least up to 1547 when the dissolution of Abbeys and Churches was in effect. It is recorded as being in ruins by the time of the 1887-1913 ordnance survey map and is surrounded by stones of an ancient graveyard with the earliest stone dated to 1713. A more modern cemetery is now adjacent on the same grounds.
Well I was surprised to find this one as it is surrounded by a large industrial estate and apart from a sign pointing to “Bluebell cemetery” which has been knocked sideways and now points in the wrong direction there is nothing else here to indicate that it exists. I finally realised that a narrow lane way between two industrial units led directly to the site hidden away.
All that remains now are the West gable, fragments of the North and South walls and parts of the East gable. The entrance door has sunk somewhat into the overgrowth but its pointed arch is still plainly visible and there is a window just above this. Records state that the West gable was unusually high in relation to the rest of the building. There is a corbel jutting out inside that leads supposition that a gallery may have been attached.
The ruins sit aloft an area quite overgrown and this has infringed on the entrance door while a few yards away the adjacent graveyard is pristine with cut lawns. I regarded this unkemptness as just another example of the disregard shown to many small historical ruins, but apparently it is deliberate, as the city council has deemed this part of the graveyard as a wildflower meadow. A sign erected illustrates a number of different wildflowers present.  The council made some remedial work on the Church in 1992 and 1993 but nothing more seems to have happened and the Church now lingers as nothing but a large garden ornament amongst the wildflowers.


To find the ruins take the R110 Naas Rd exit from the M50 heading towards the city. At the junction with Kylemore road turn left. Drive approx.. 200m to the next set of lights at a small crossroads (The Kylemore house pub will be on your left). Turn right at the crossroads onto the Old Naas Rd. Drive for approx. 250m until you see a large sign on your left for Bluebell Business Park & Centre. The lane way to the Church is between this and the gates of the next business unit. (You will spot the sign for Bluebell cemetery opposite pointing the wrong way)  You can park along the road here.