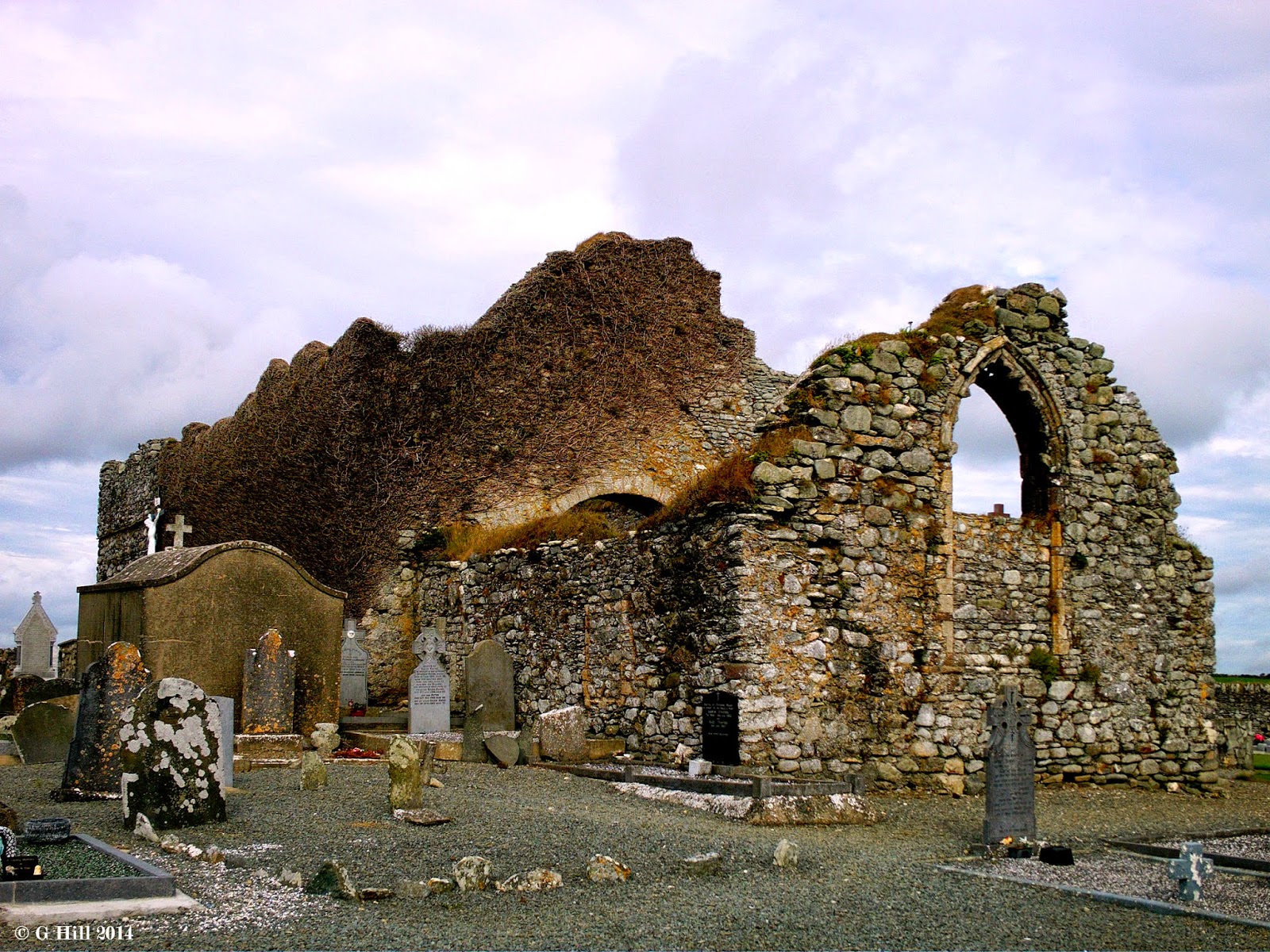 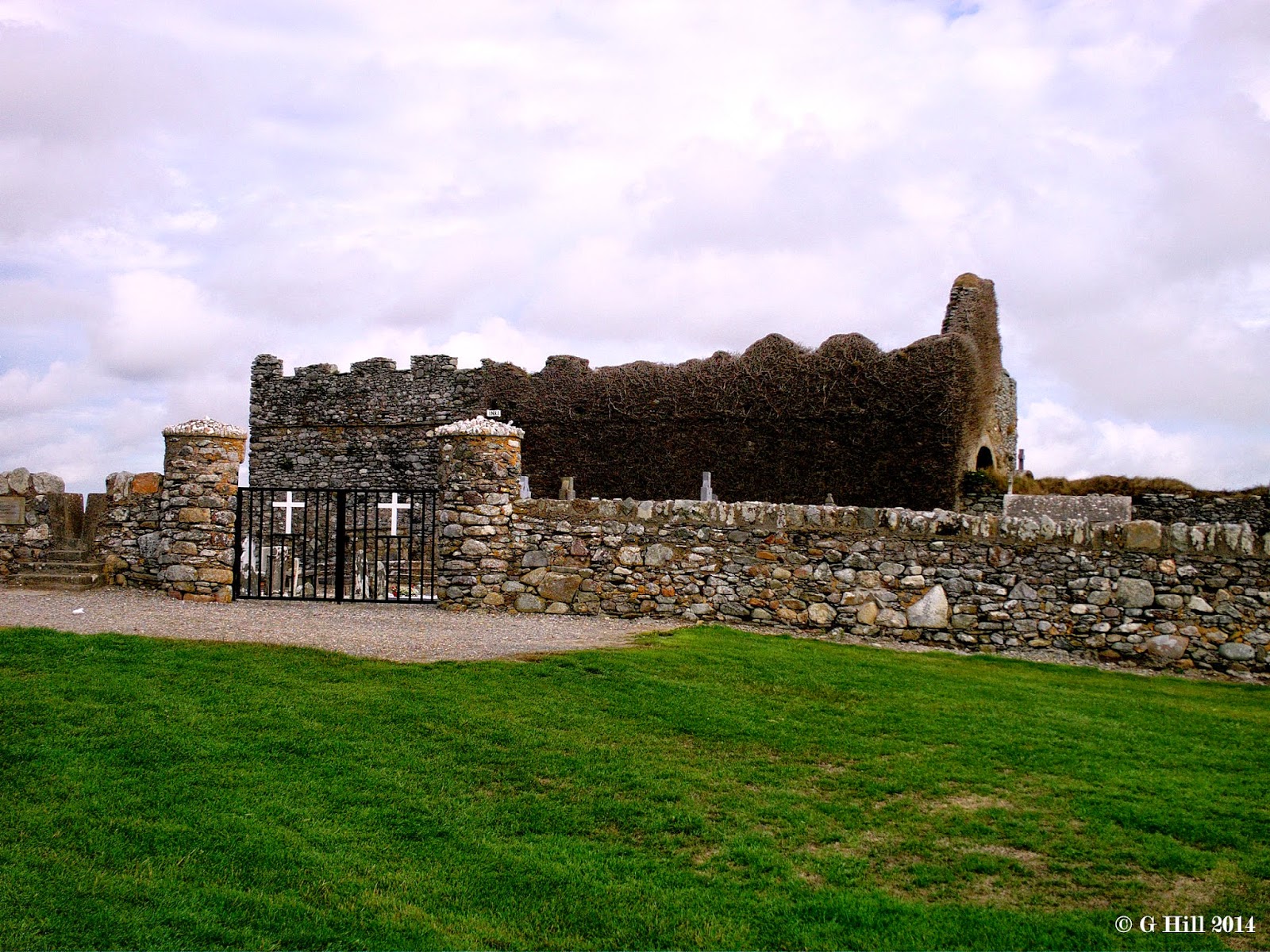 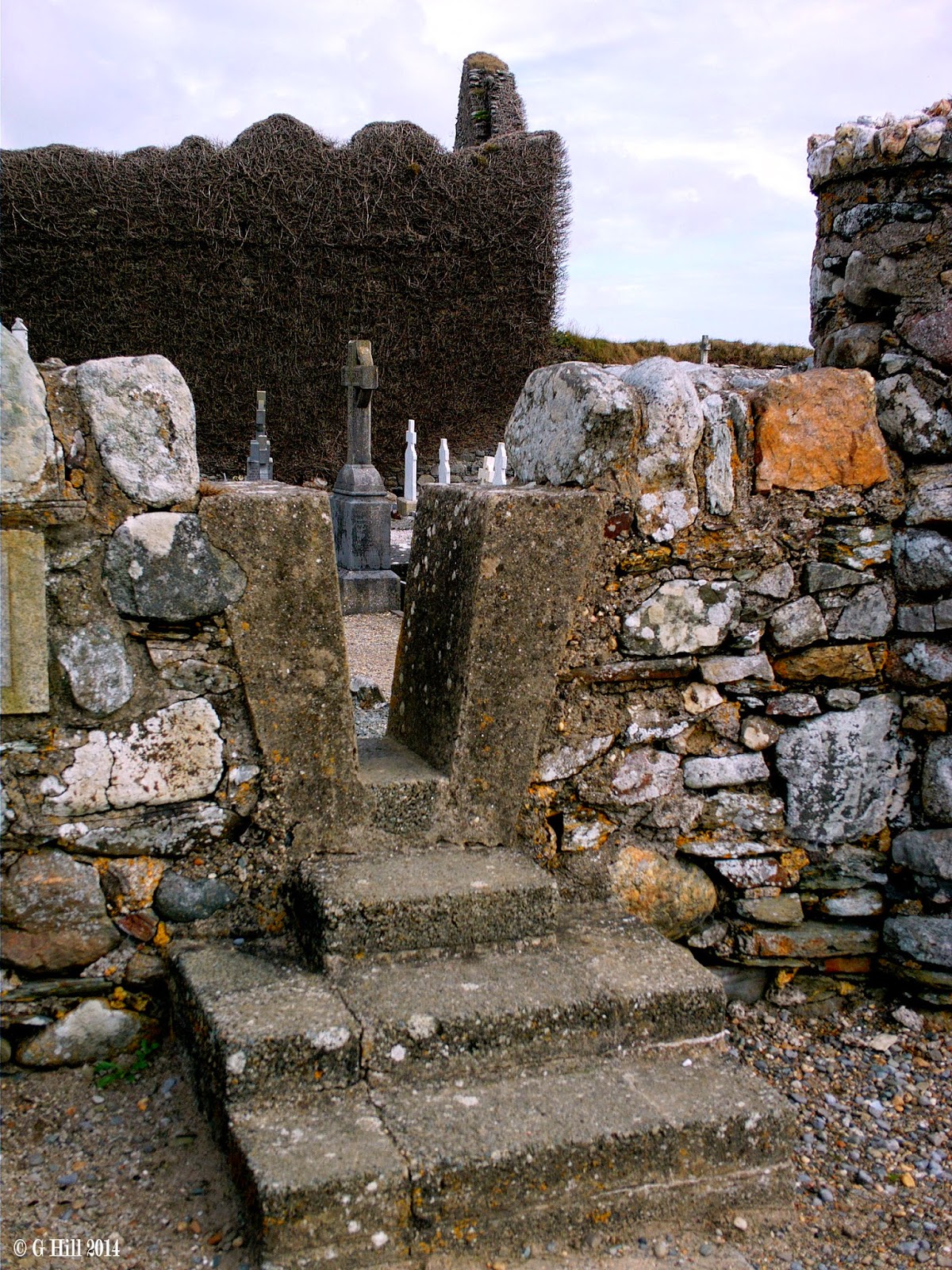 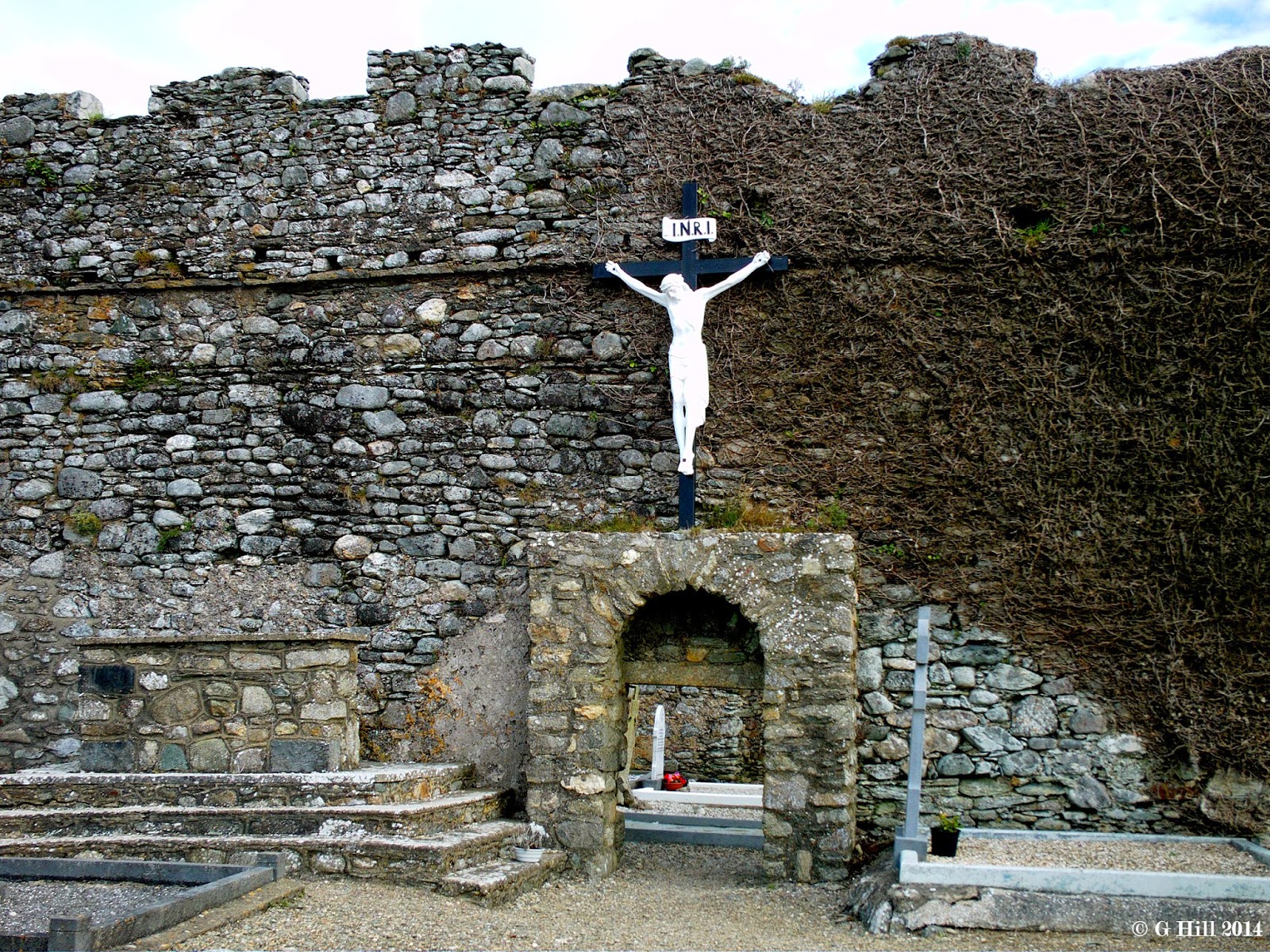 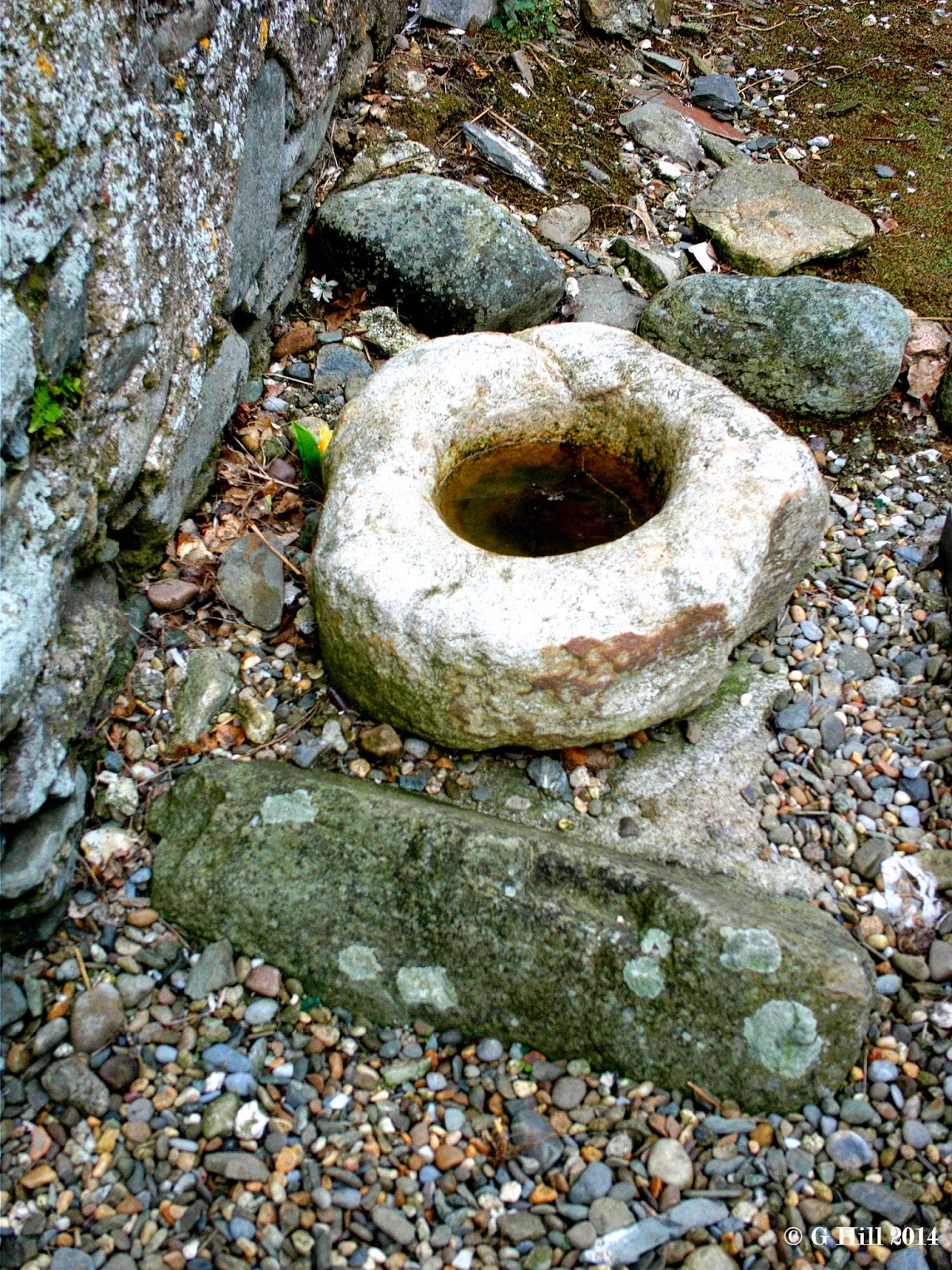 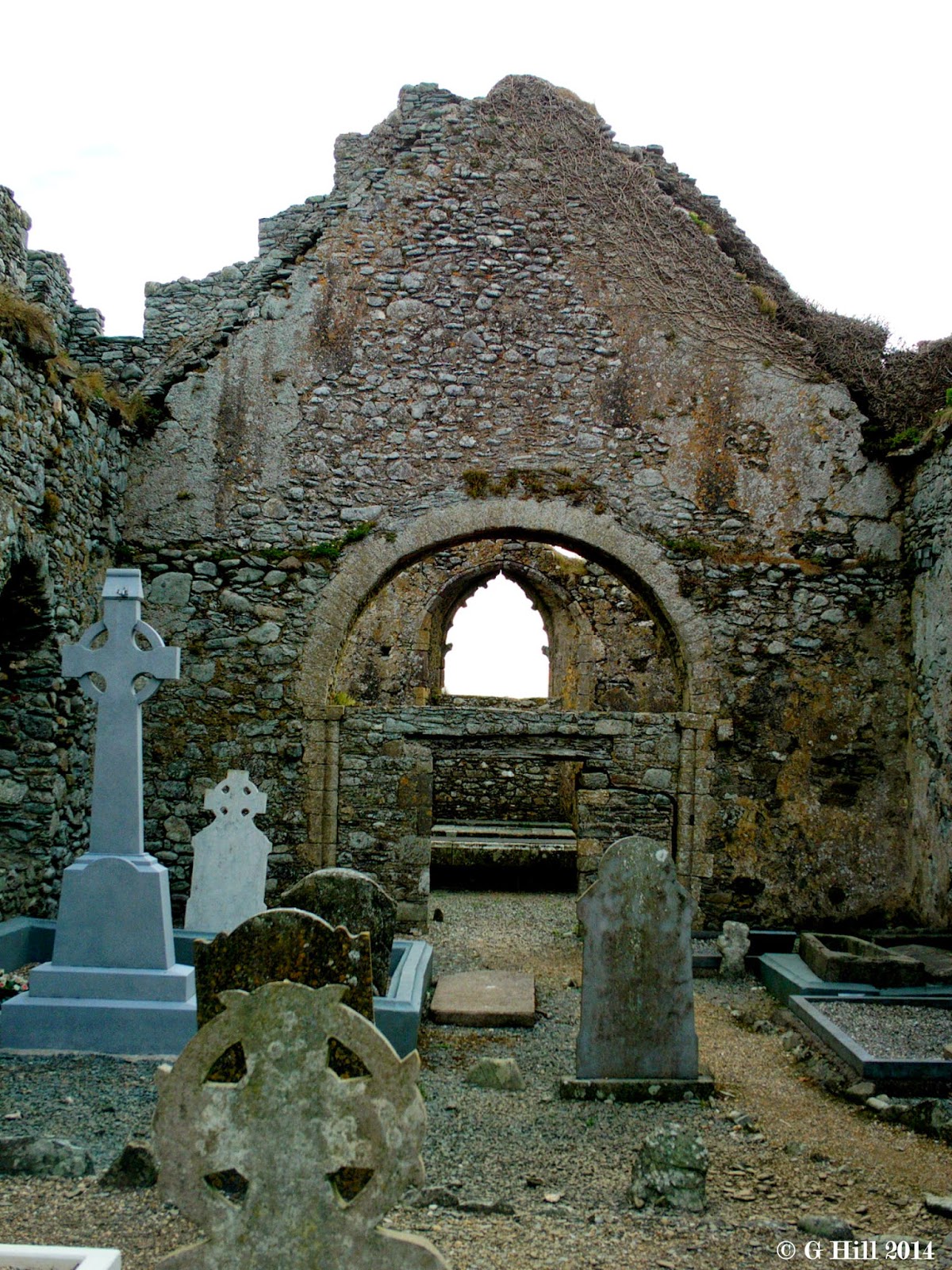 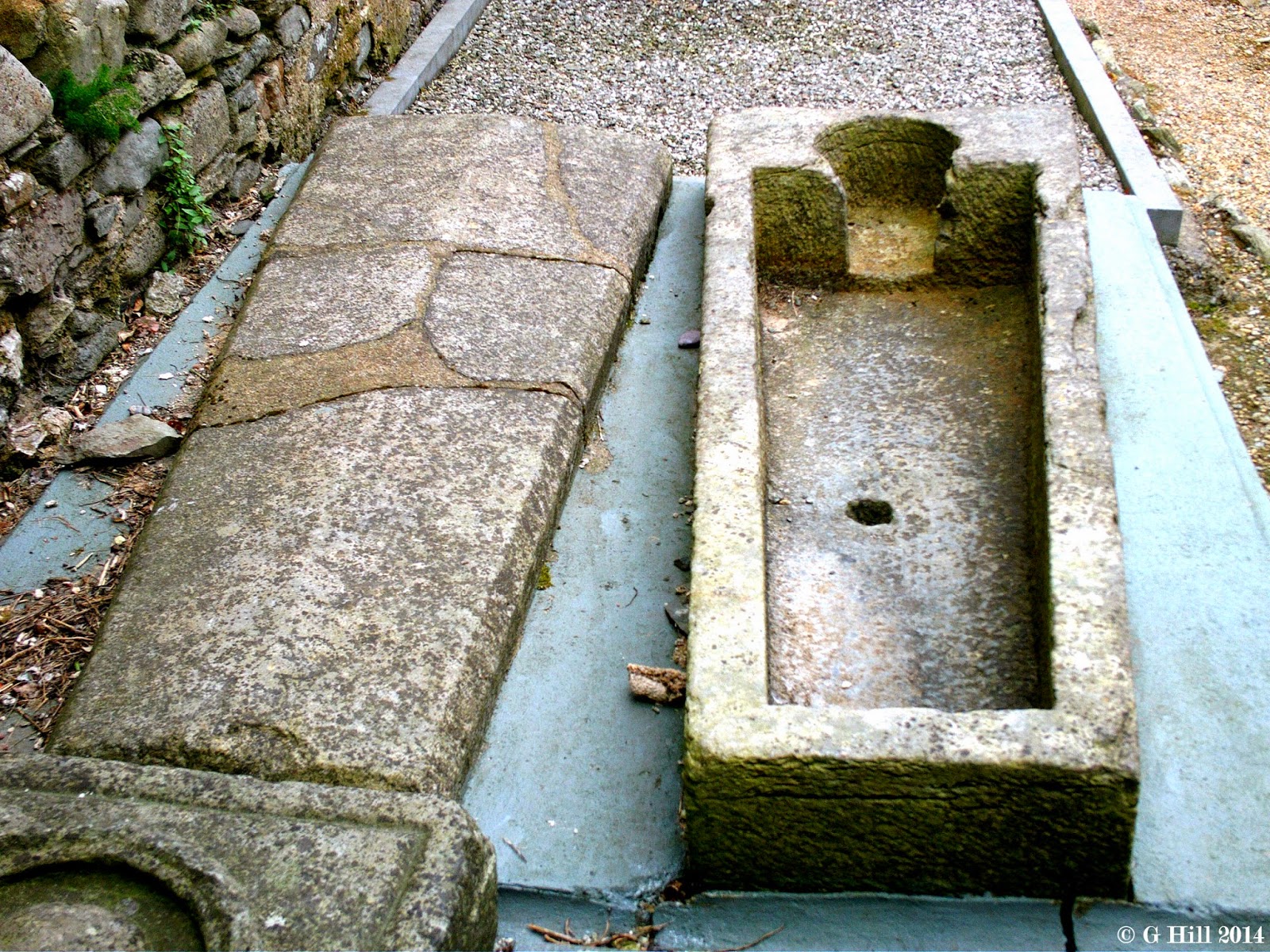 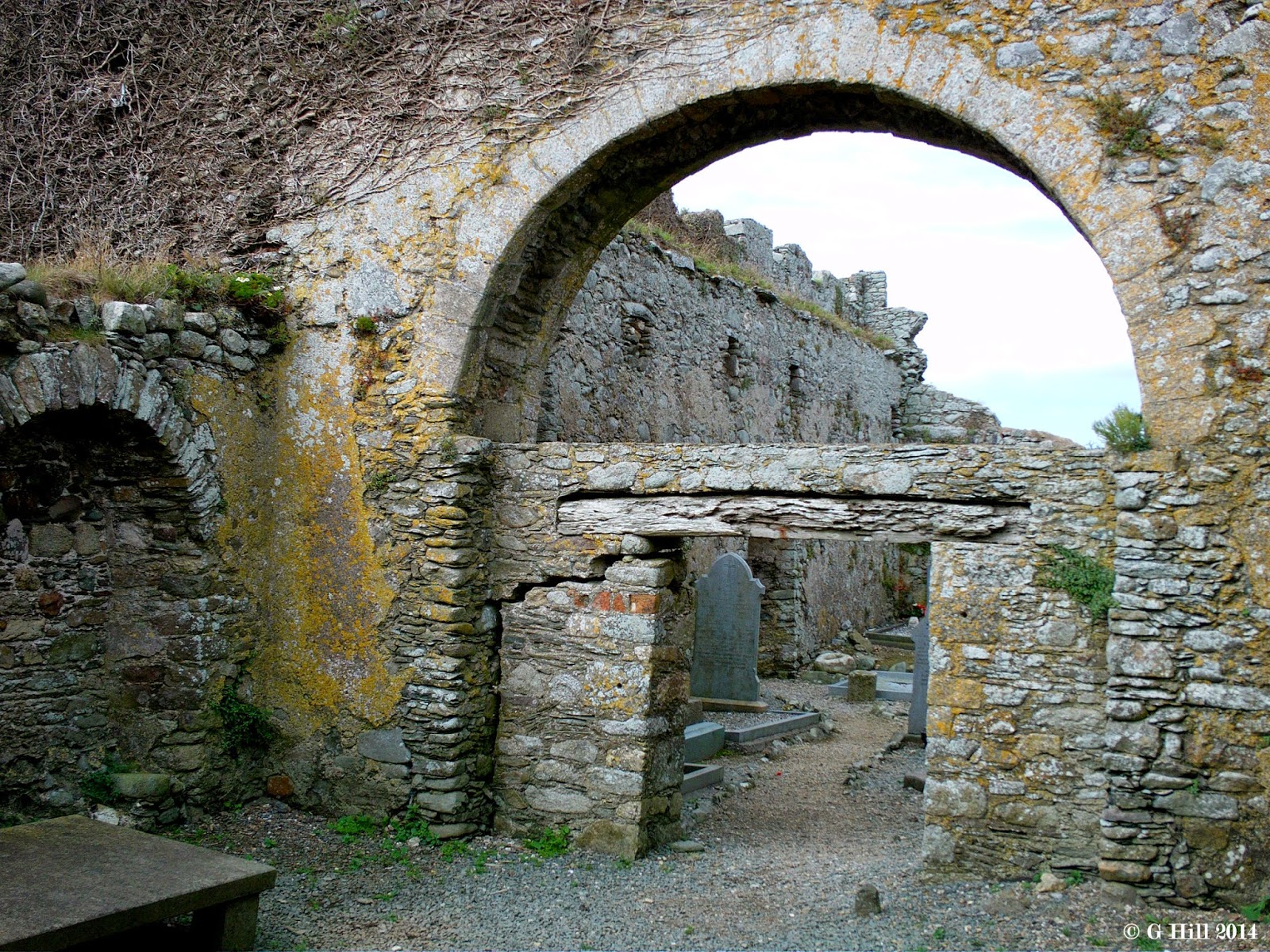 Image Below: The grave slab 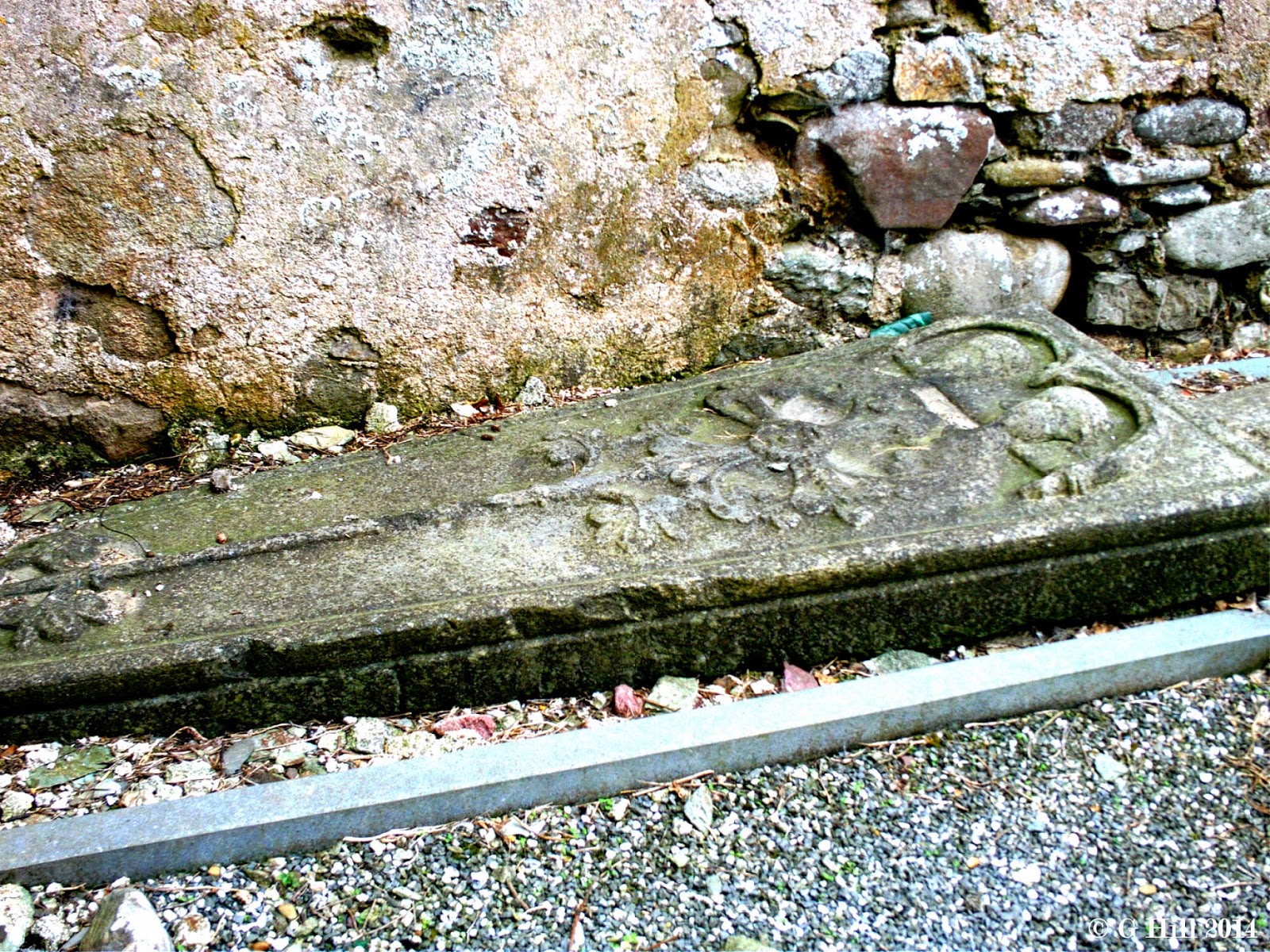 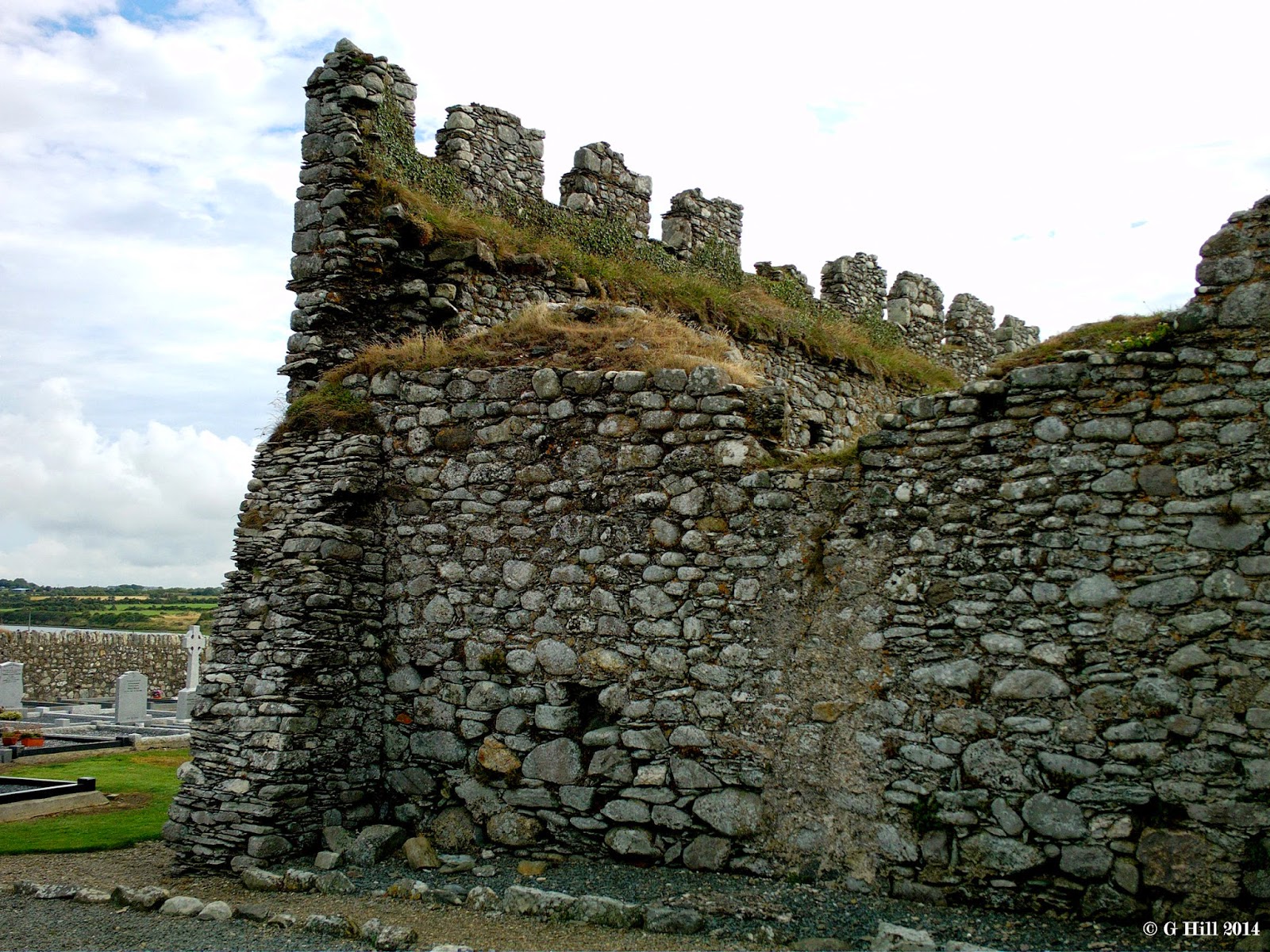 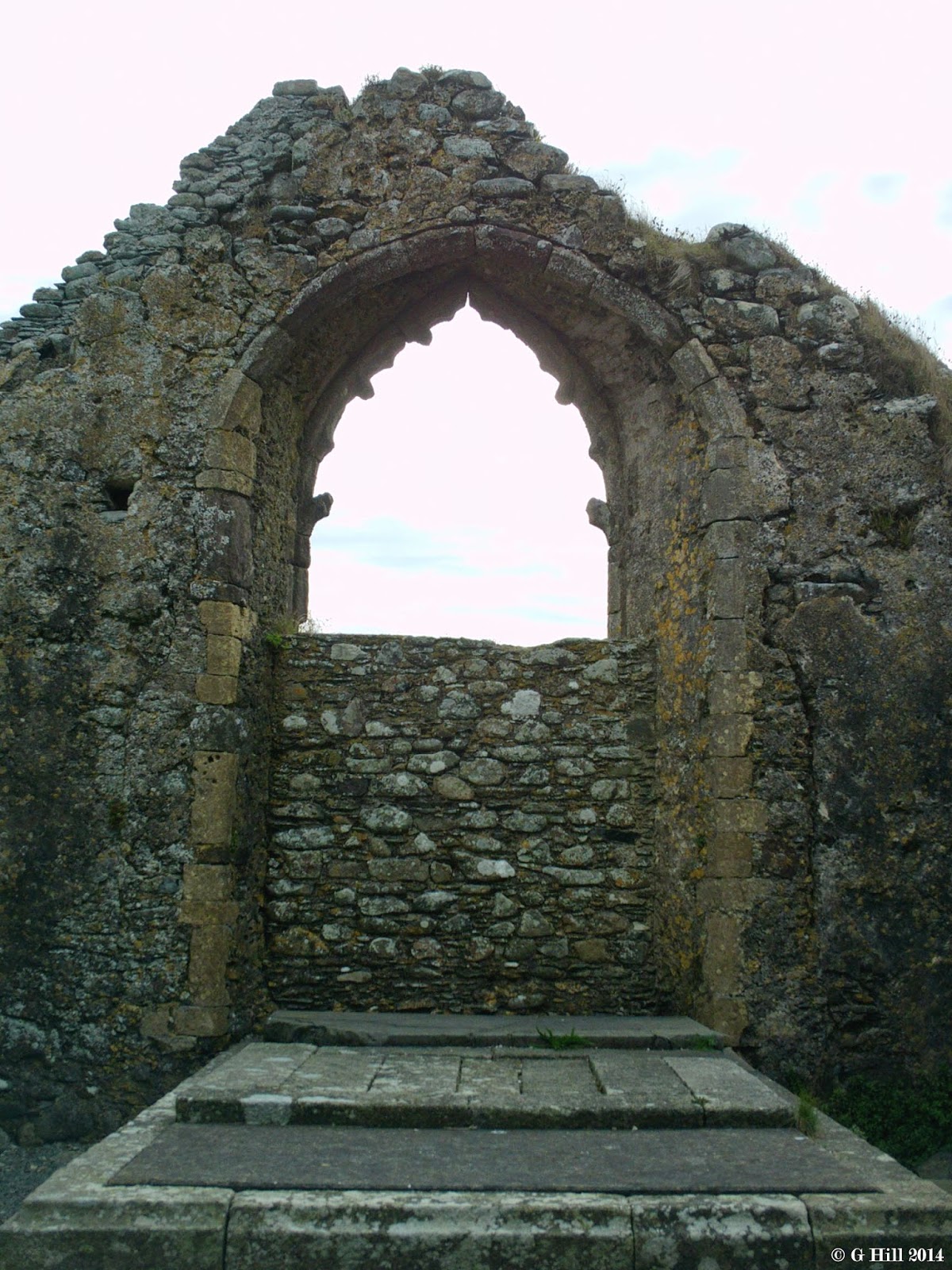 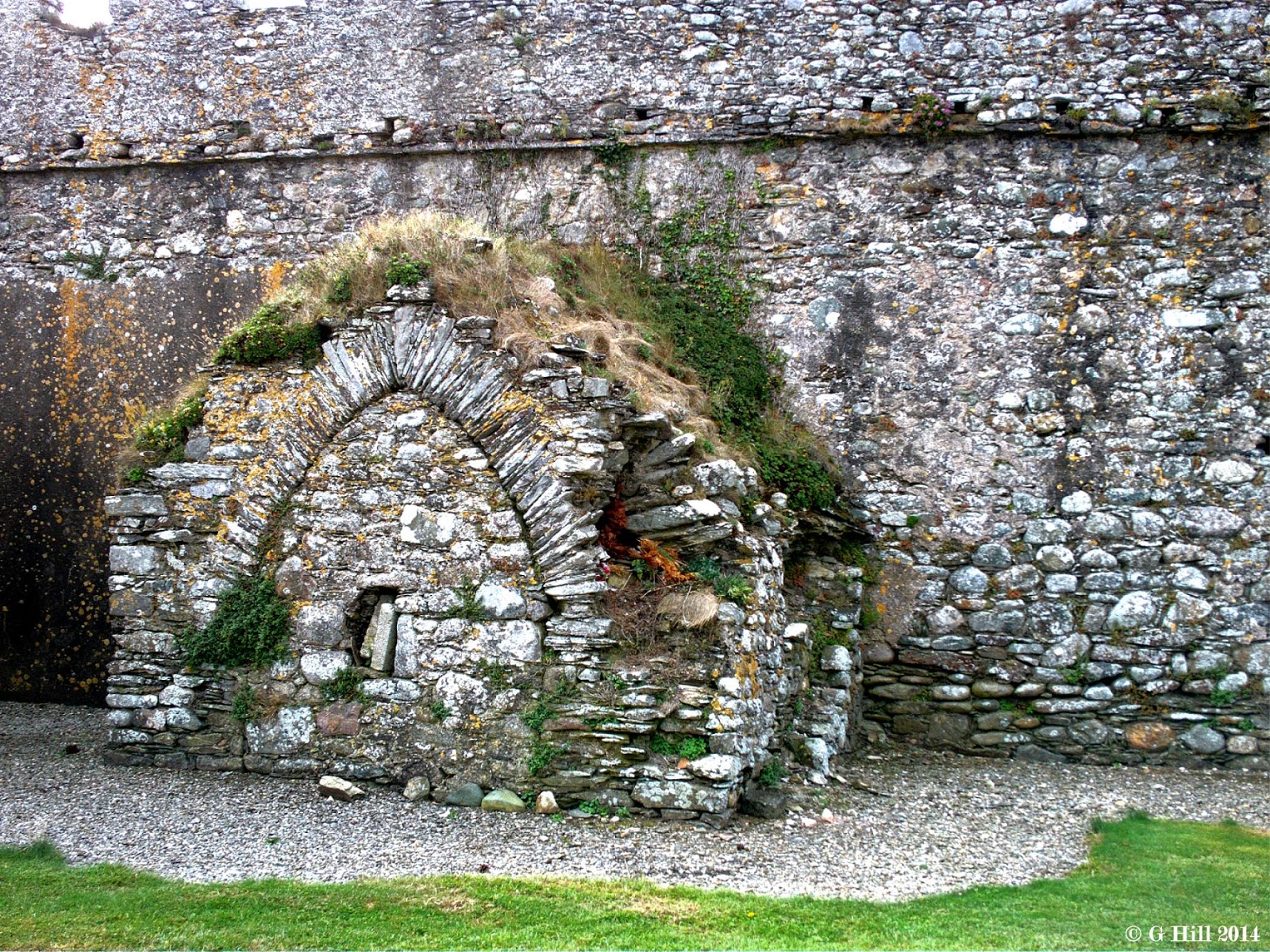 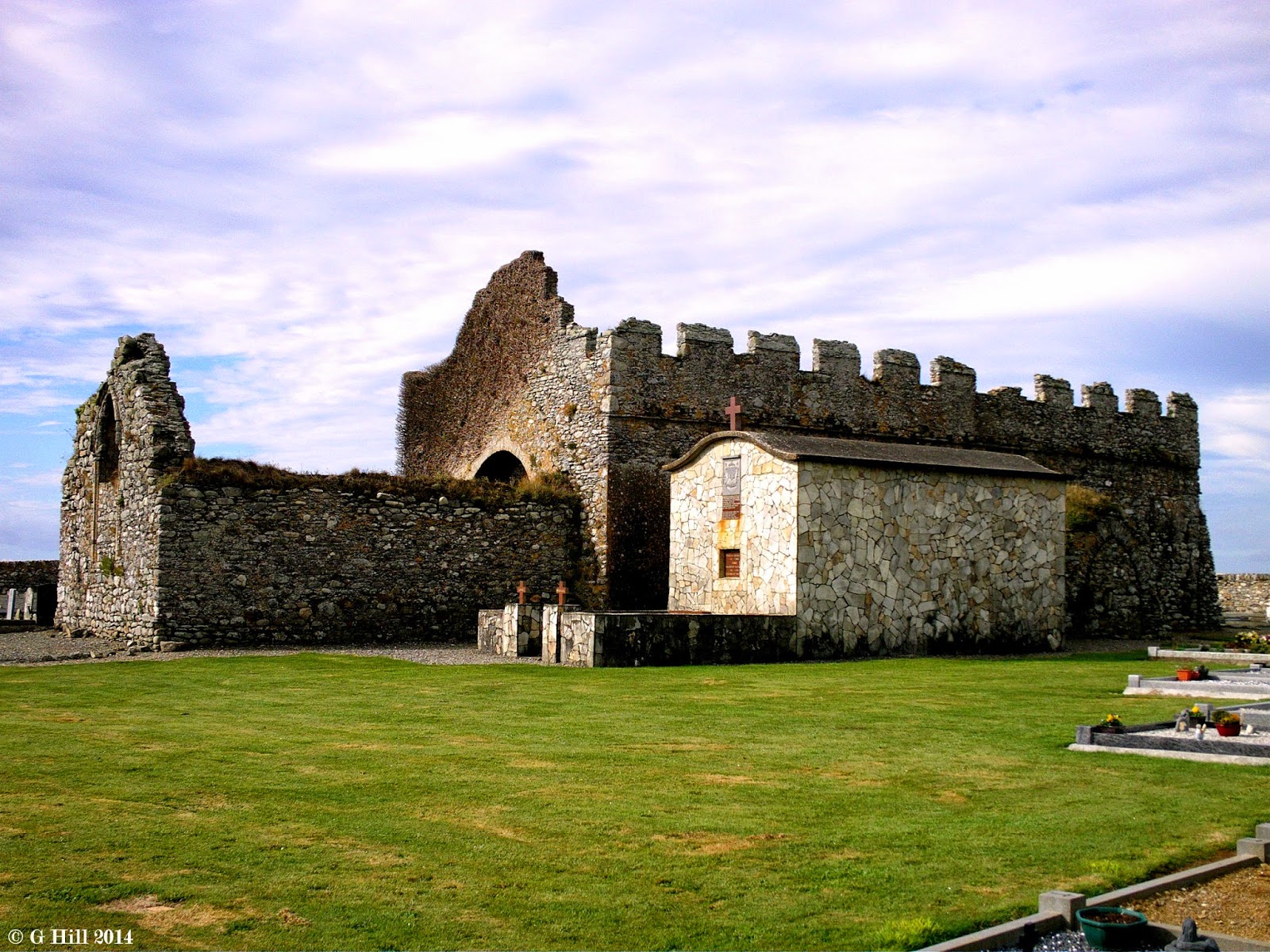 Above & Below Images: The Prince Michael Sepulchre & Plaque 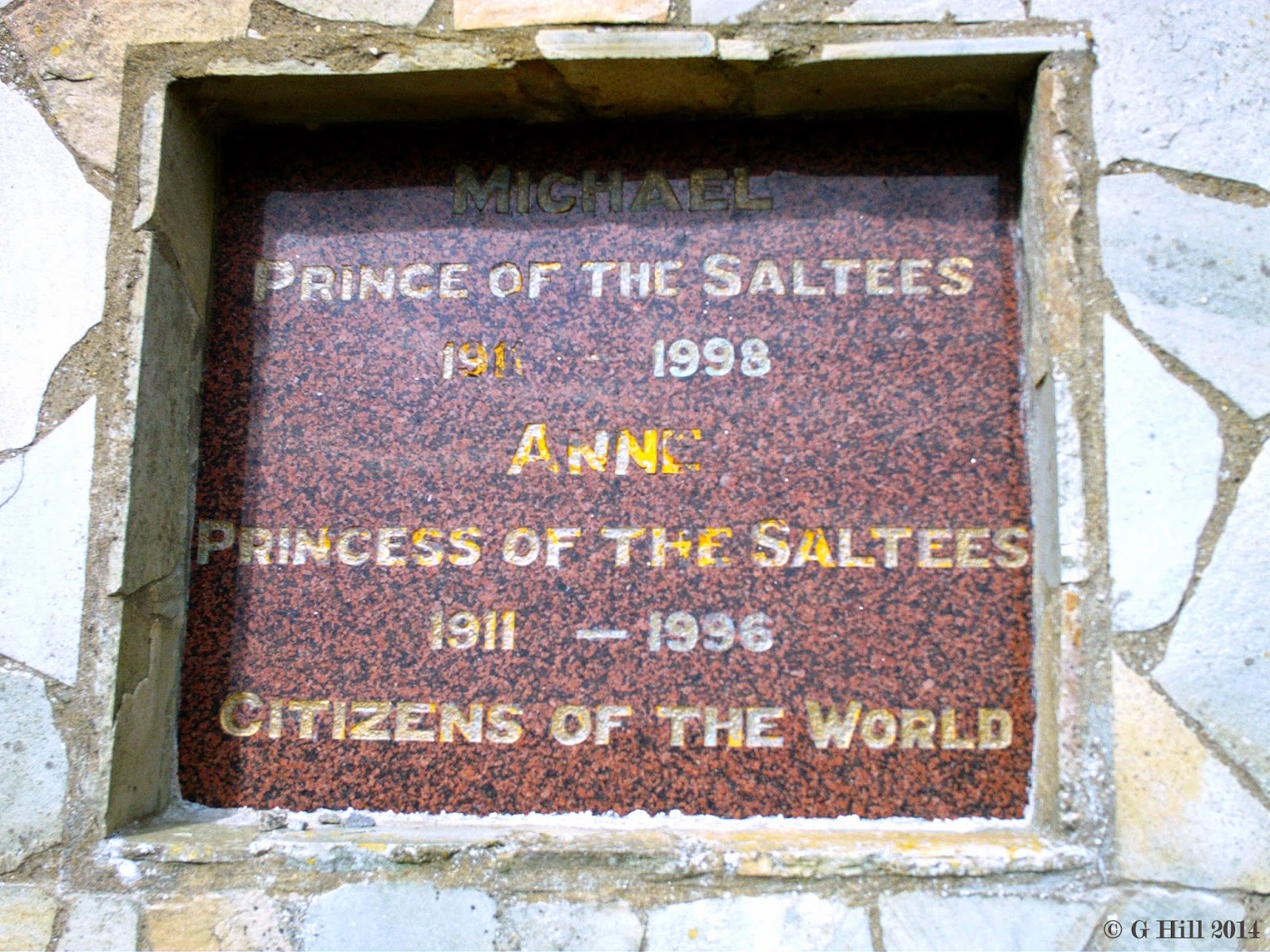 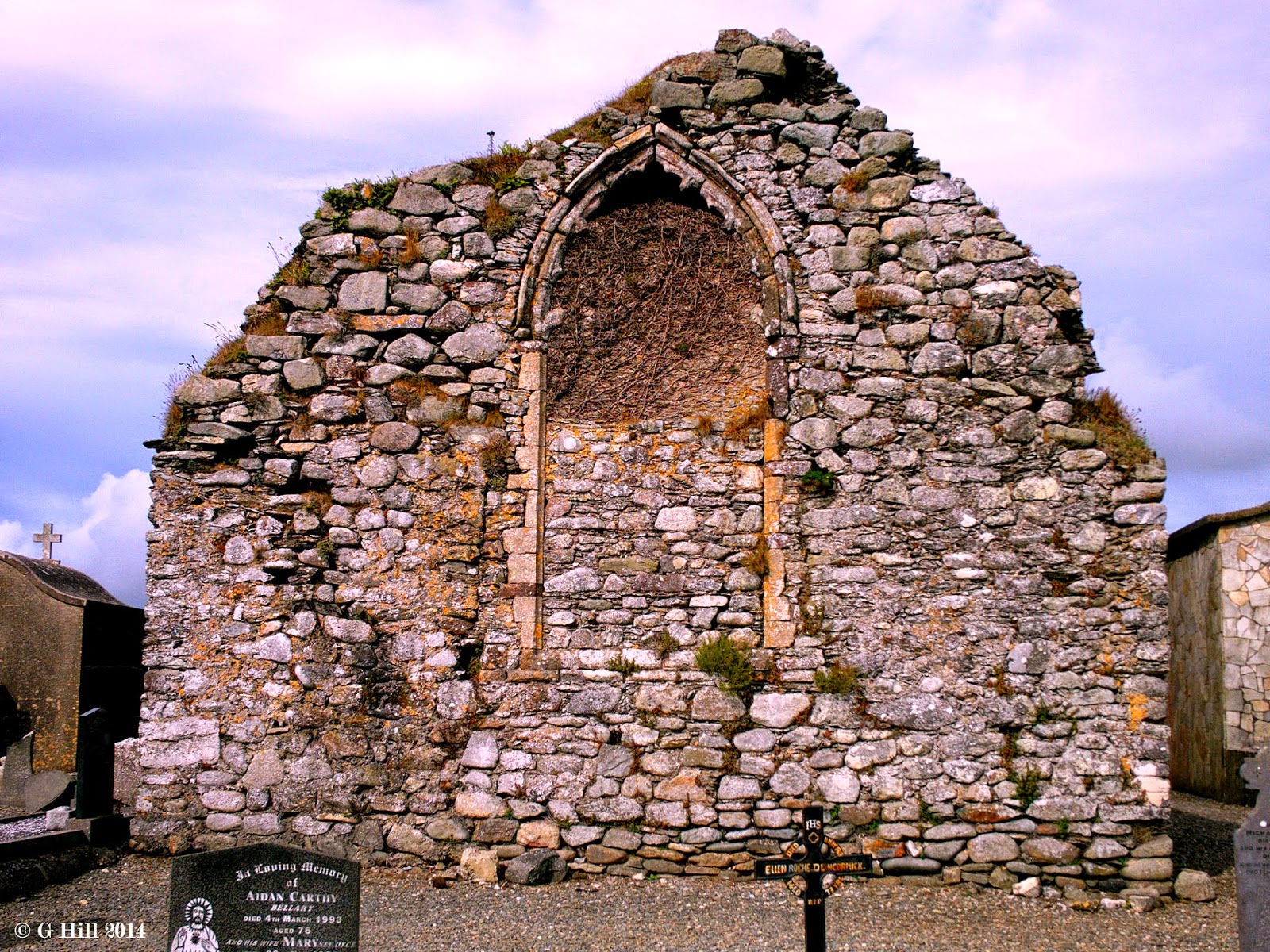 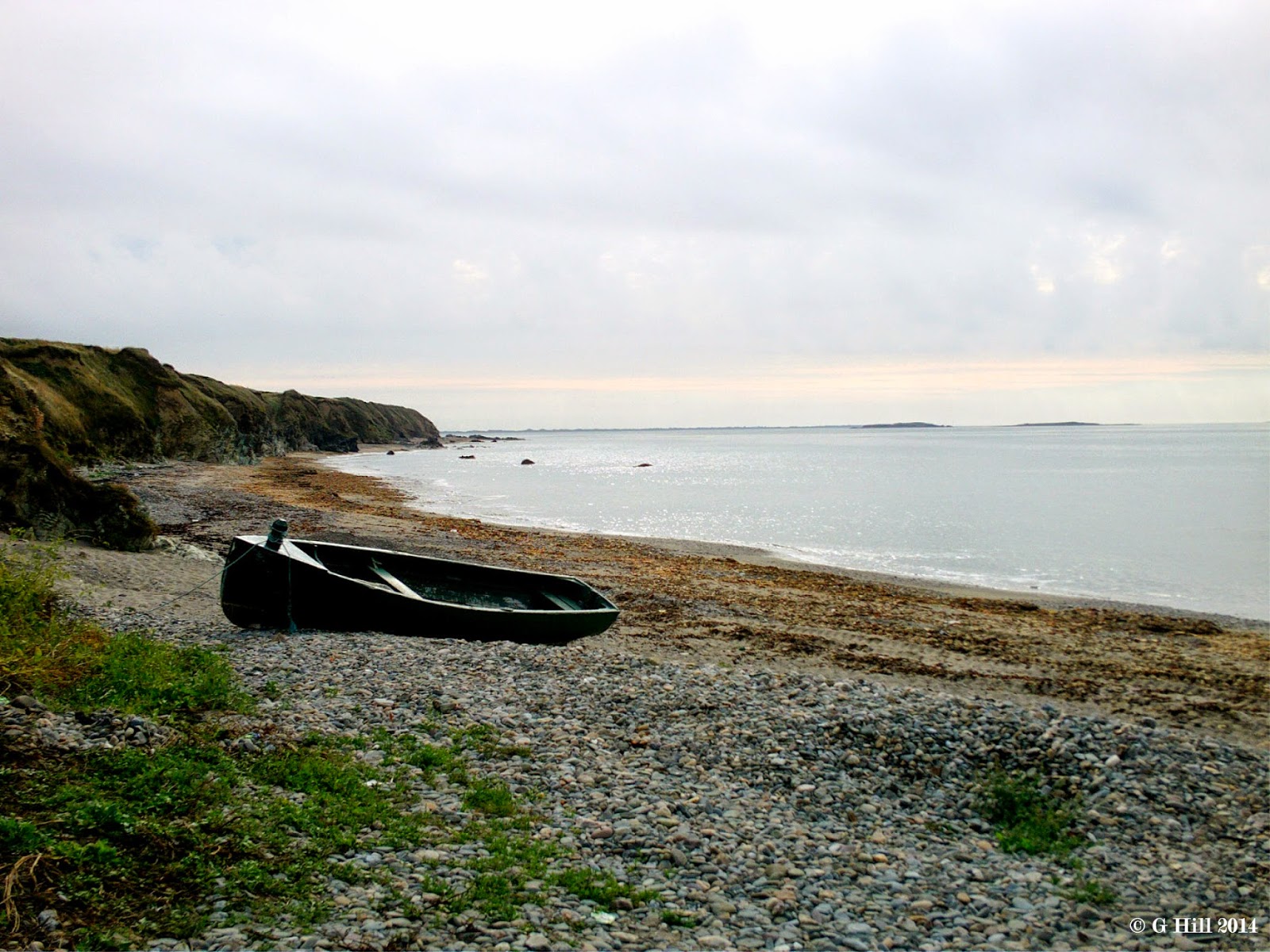 Above & Below Images: Two views of Bannow Bay with the Saltee
Islands on the horizon 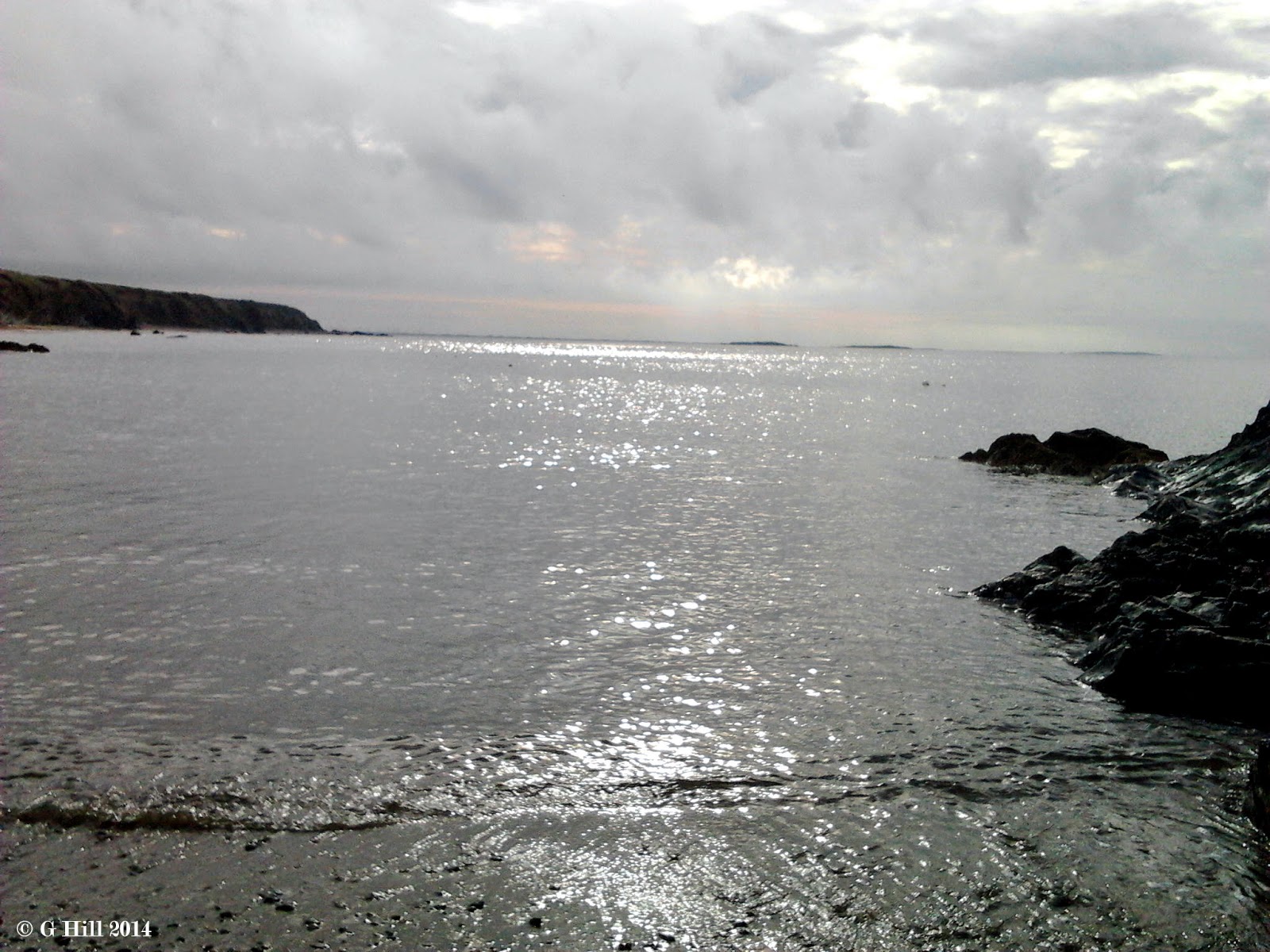 These interesting ruins are located on a sandy headland overlooking Bannow bay where the Normans first invaded Ireland in 1169. The Church constructed in the 13th century in a Romanesque style is the only remnant of the lost Norman town of Bannow which is said to have sunk beneath the sands in the 16th century when the silt in the bay rose and swept over Bannow Island. The town which was of some importance and had nine ‘named’ streets disappeared with the exception of the top of the chimney of the town hall. The church only survived because it was positioned 30 feet above sea level.
The Church dedicated to the Blessed Virgin Mary consists of a nave and chancel and is now surrounded by a more modern graveyard enclosure. The walls of the Church are crenellated giving it a very fortified appearance.
We came across this ruin purely by accident. We had taken a trip down to Bannow Bay to see where the Norman invasion had initiated and spotted the large structure in the distance on our way back. Never one to turn down an opportunity to see a good ruin I diverted us to have a look. A small sandy car park is provided as the Church is surrounded by a graveyard still in use. A stile gives you access and you enter the ruins by a doorway in the South wall of the nave. A small font lies just inside but apparently a more ornate font was removed in the past and now resides in the Church in Danescastle.
There are some interesting artefacts to see within including a large stone 14th century grave slab and an open stone coffin. The chancel area contains a large arched East window and some tombs.
Outside the walls a portion of the North wall has been smoothed for it seems to use as a hand ball court. I have noticed this several times before in places such as Newtown Church in Co. Kilkenny (See earlier post) Is this a peculiarly Irish thing?
At the North eastern end a large sepulchre stands attached with a memorial plaque dedicated to Prince Michael of The Saltee Islands and his wife Anne. In 1956 Michael Neale a colourful and quite wealthy character self declared himself Prince of the offshore Islands which he had purchased in 1943 and subsequently turned into a bird sanctuary. He and his wife lived periodically in this self styled micronation until their deaths in the 1990’s and his son Prince Michael II has now taken up the mantle. Visitors are allowed to visit the Great Saltee Island only during certain daytime hours.
So this small diversion turned out to be a quite interesting visit. The Church of Bannow stands silently now alone on its windswept location the only testament to the lost town but I have to say it was well worth the time to make a visit in what is a very historical area.
To find the ruins take the R736 south from Wellingtonbridge and drive for approx. 4.5KM until you reach a T-Junction. Turn right following the sign for “The Bannow Drive” and continue for approx. 4KM until you reach a fork in the road with two signs one pointing right to “Bannow Island” and the left for the “Bannow Drive”. Follow the right for “Bannow Island”. Approx. 400m later there is another fork in the road and you will see the ruins in the distance on your left. Follow the left track and it will lead you to the car park.
Posted by Castlehunter at 08:59