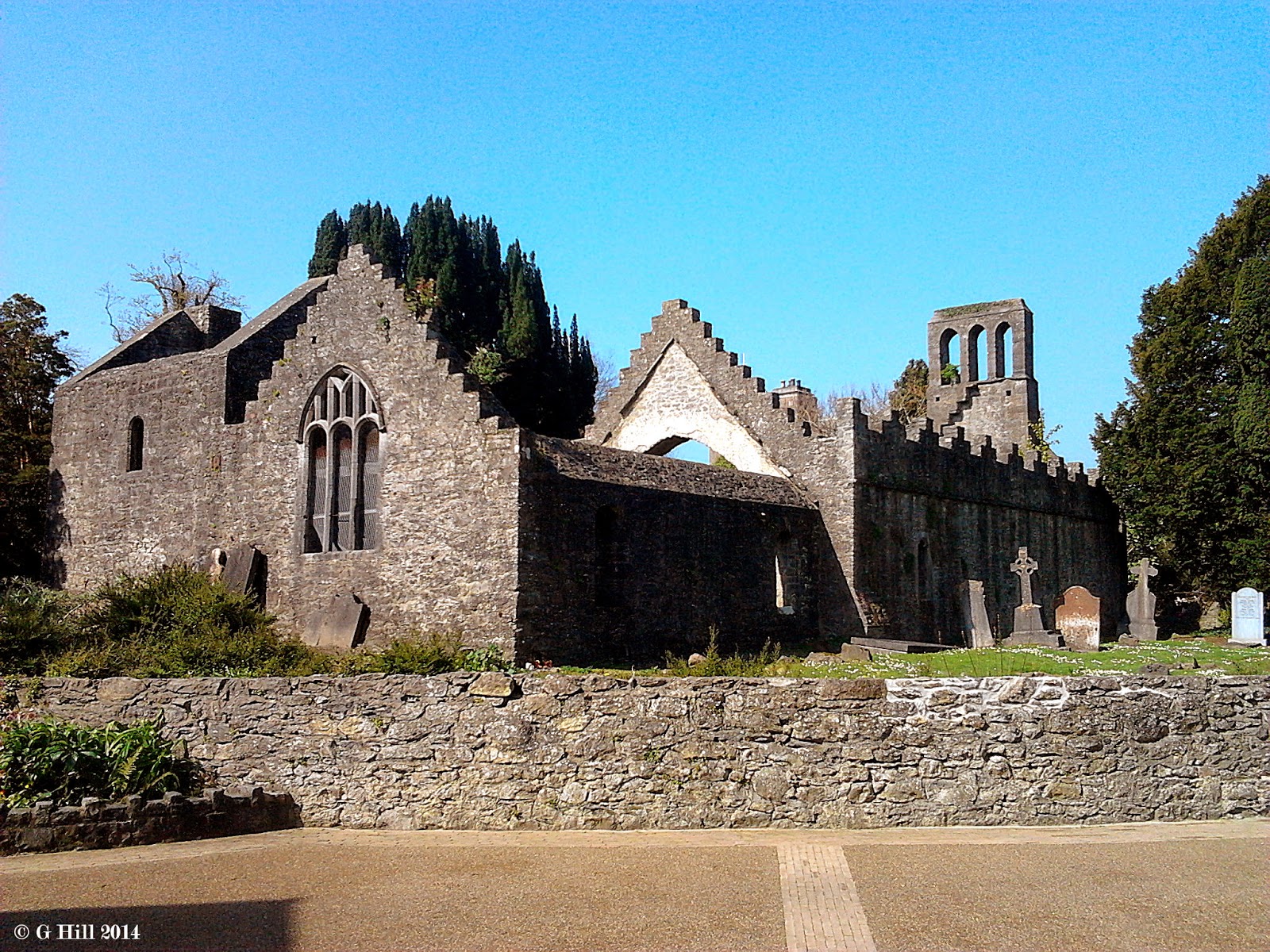 Above Image: The first view of the Abbey 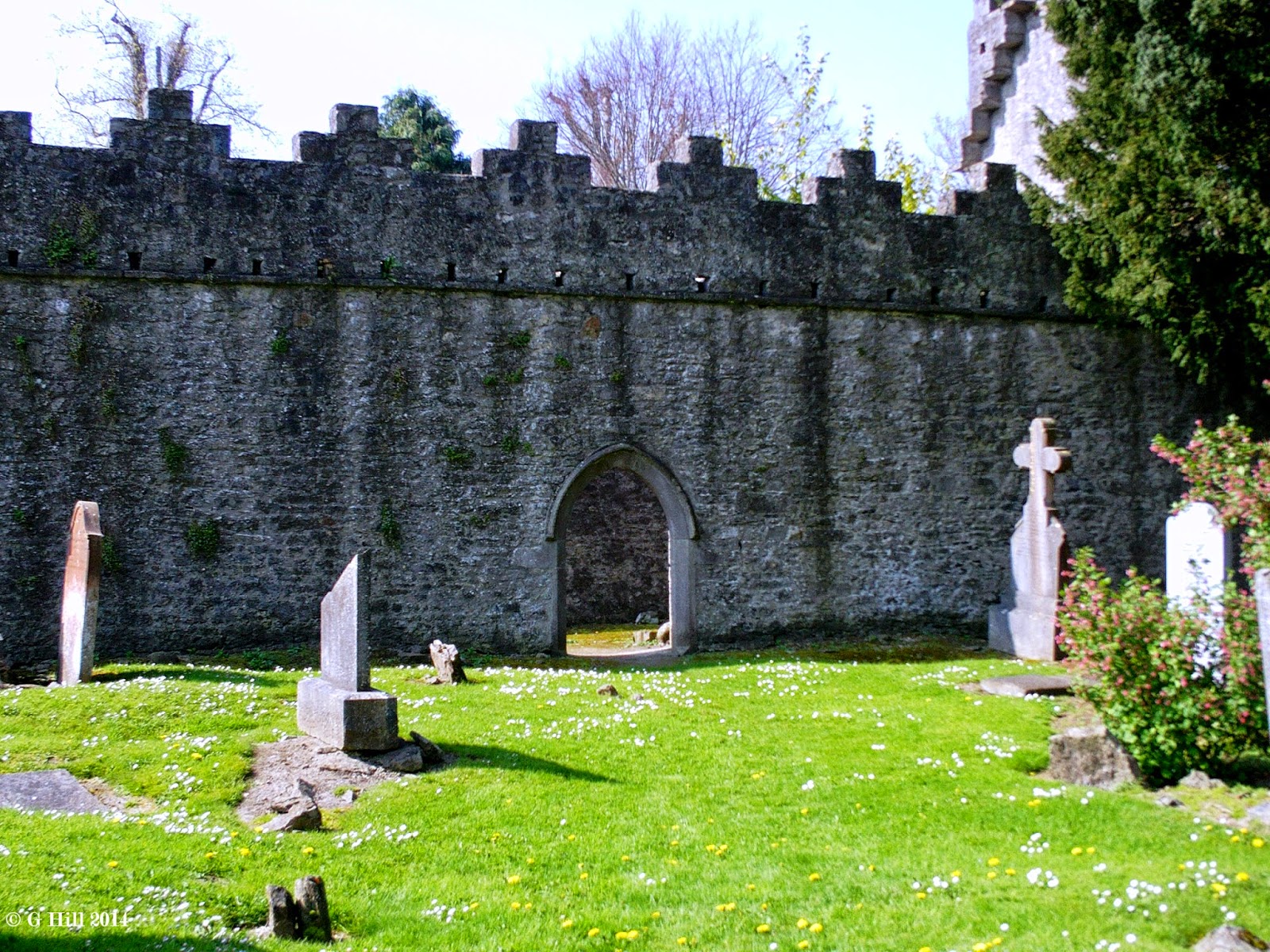 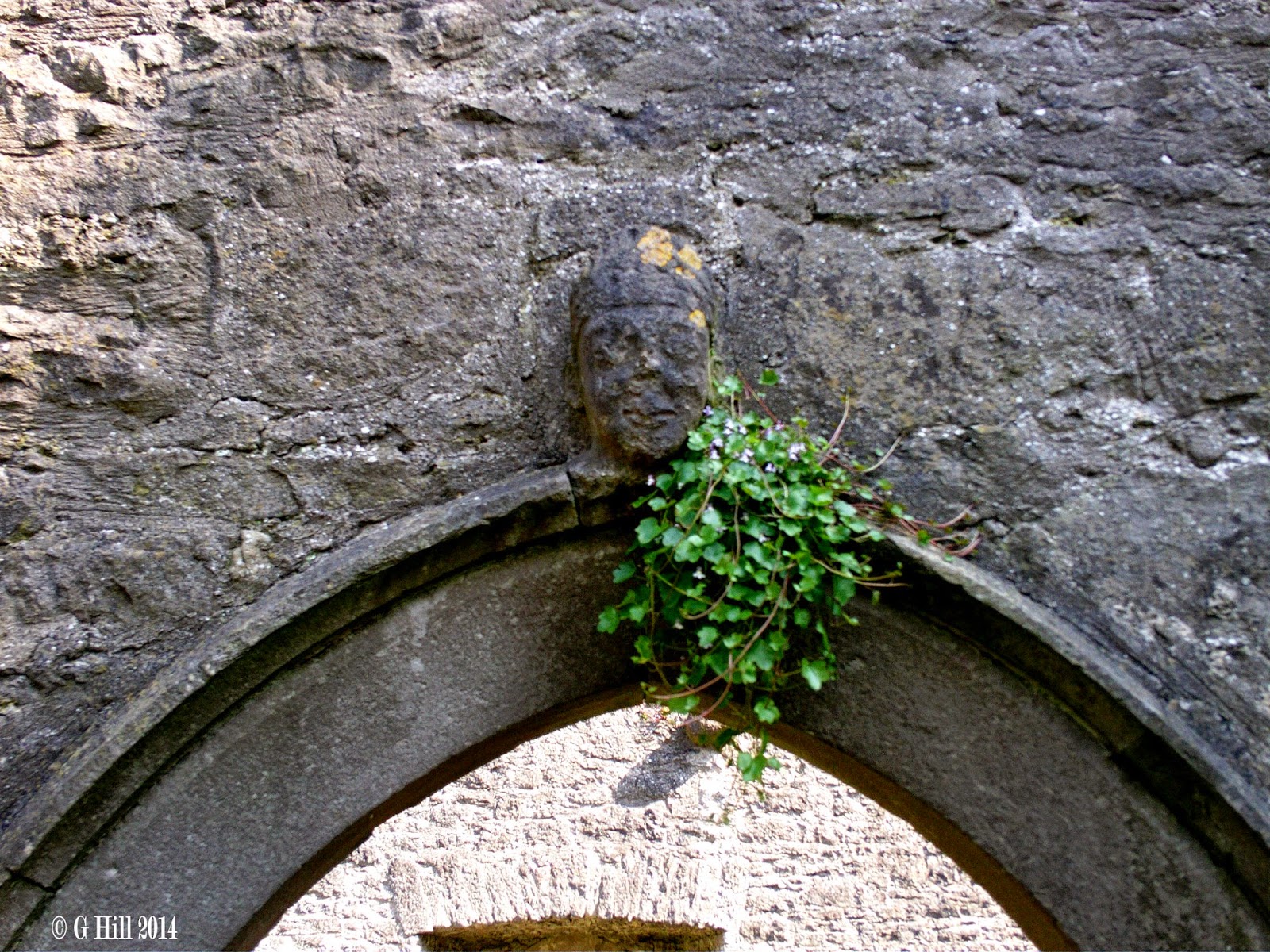 Above Image: The South doorway 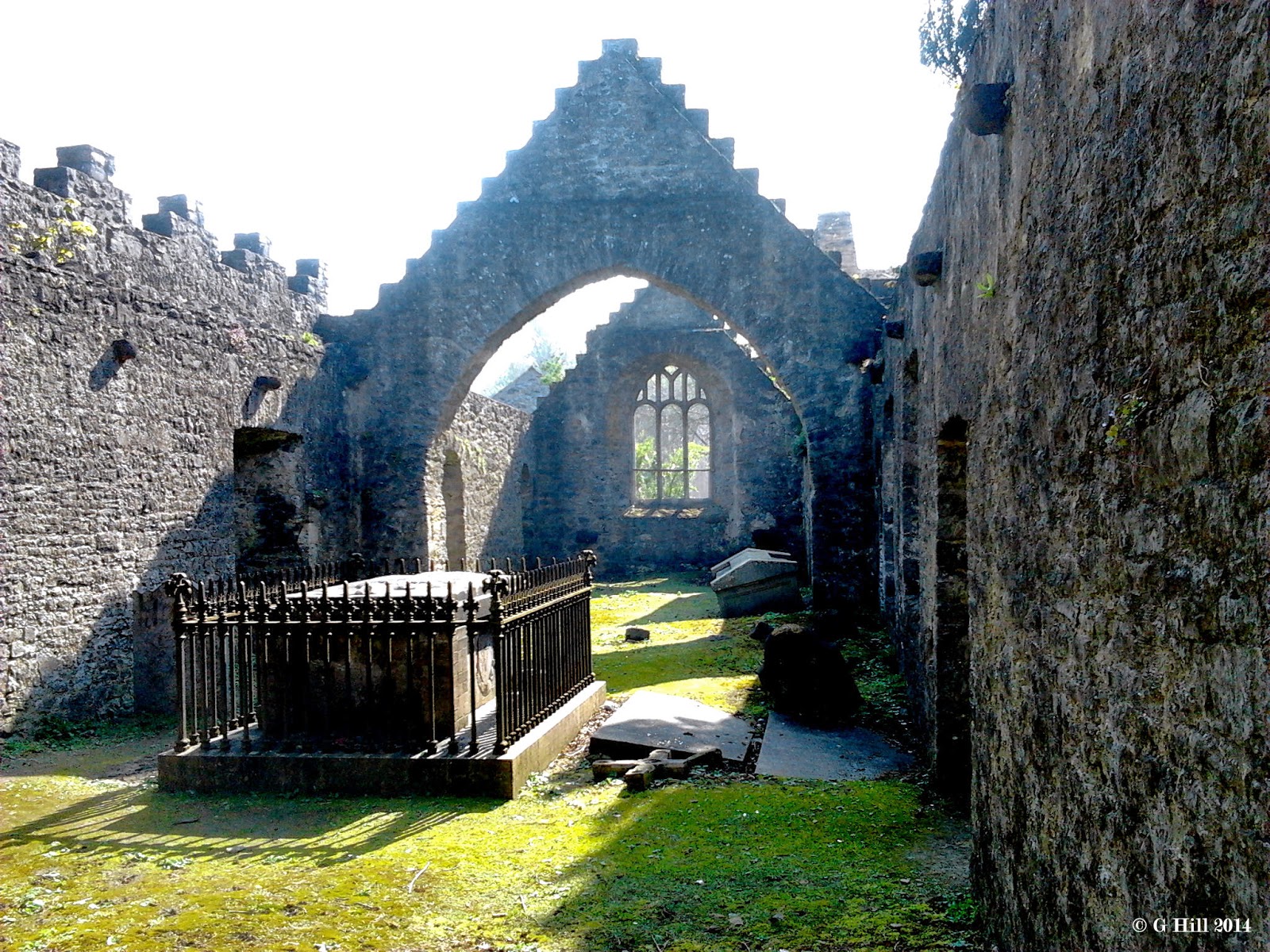 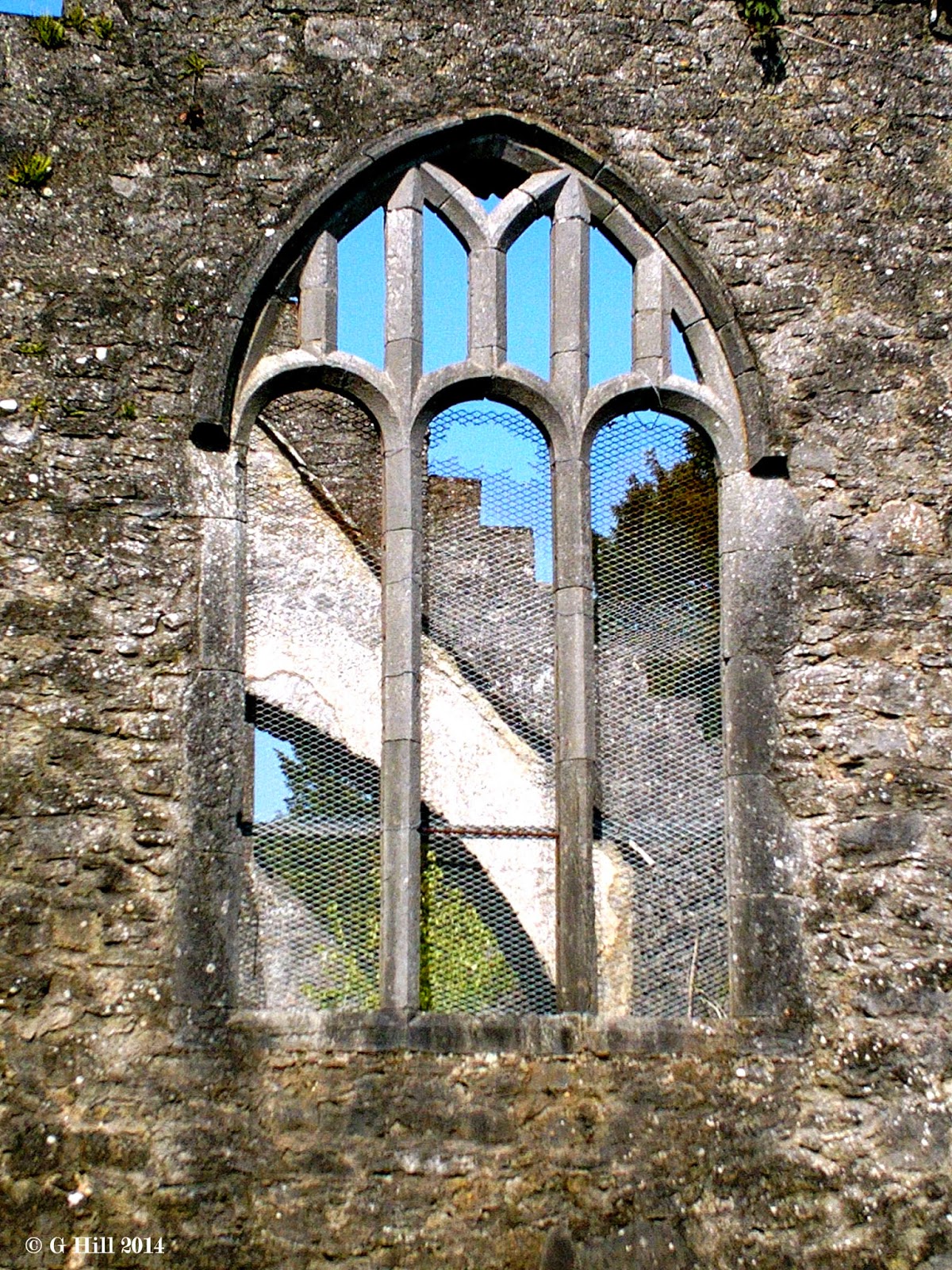 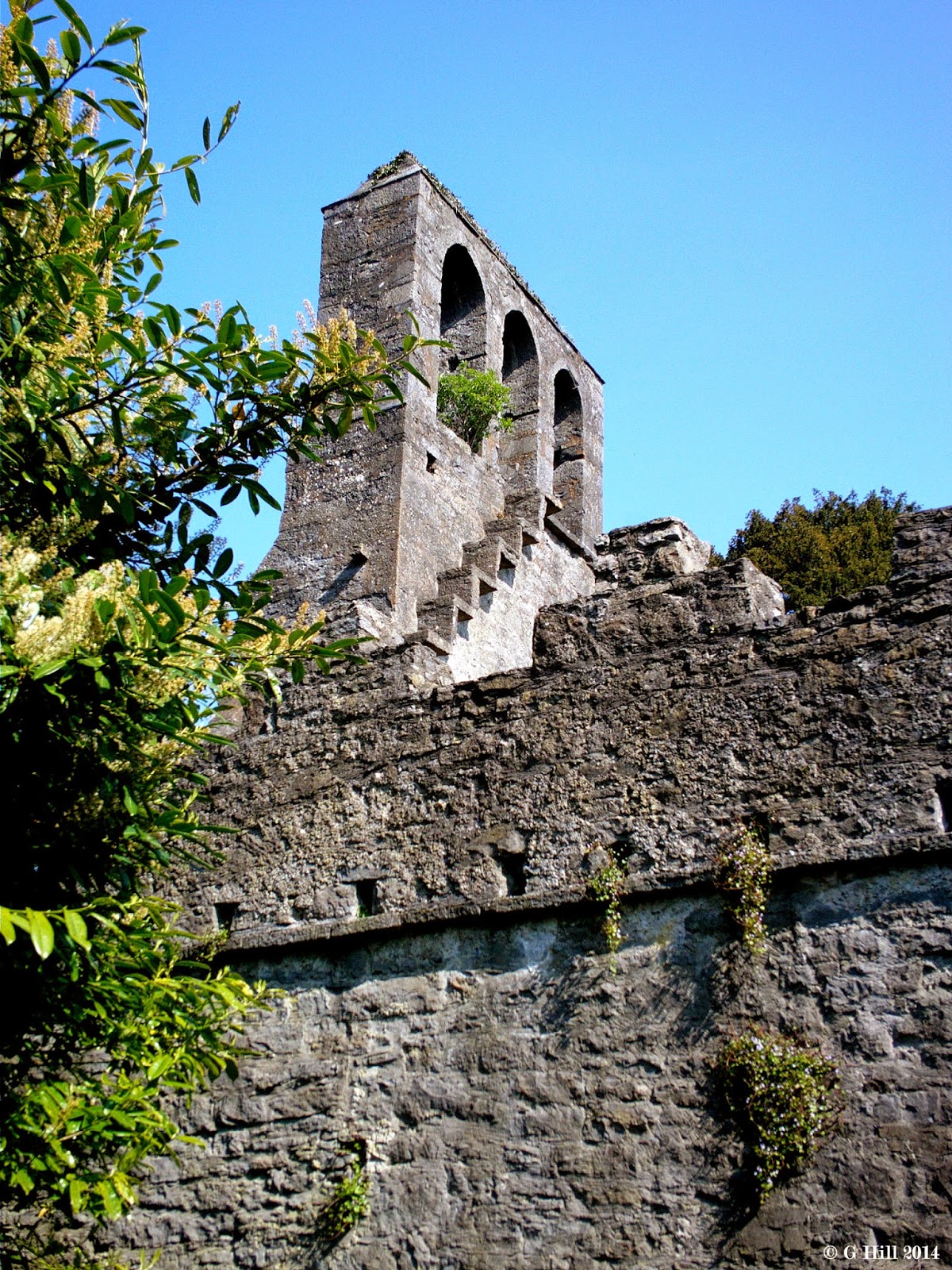 Above Image: View of the tower from the South side 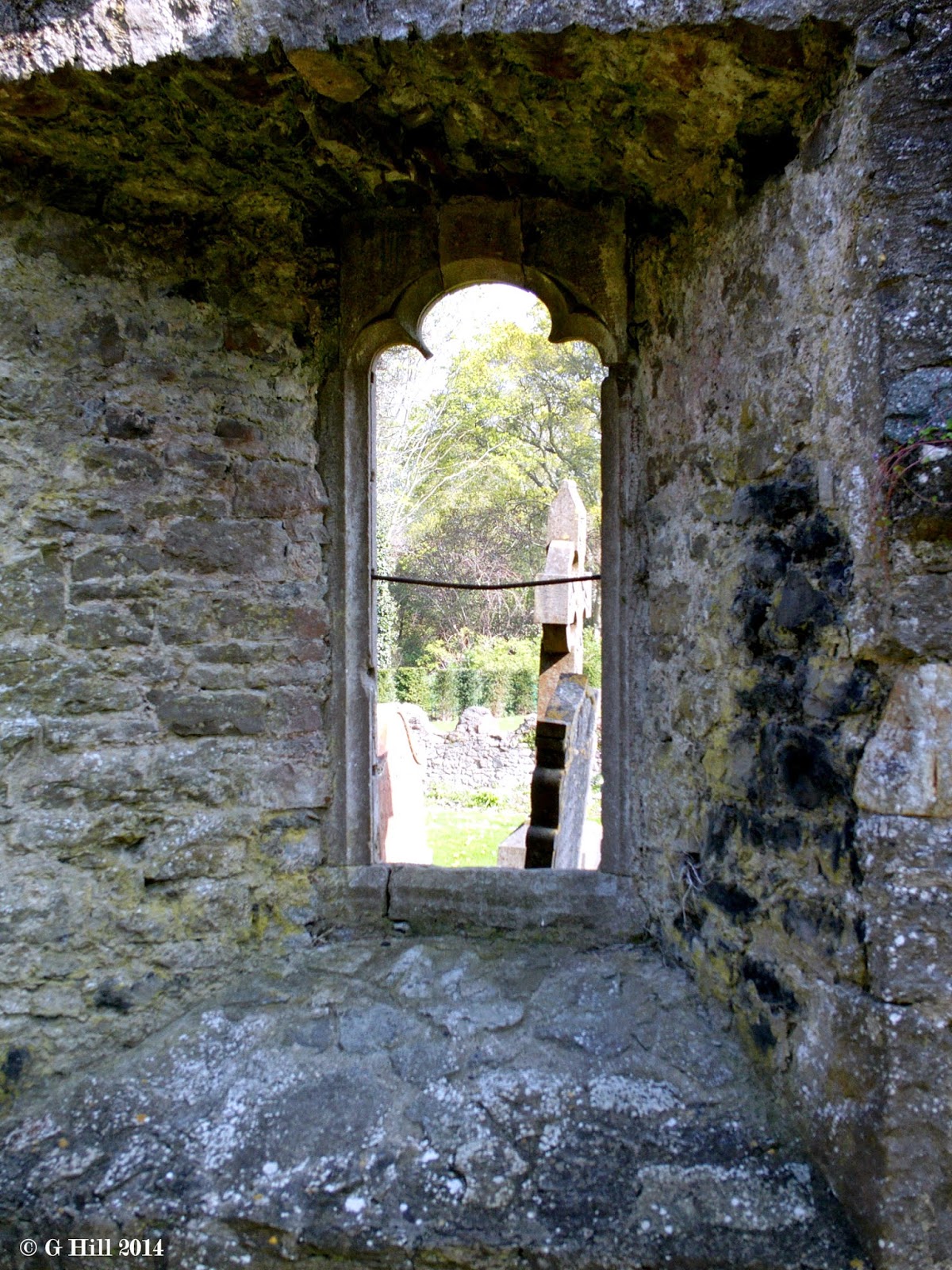 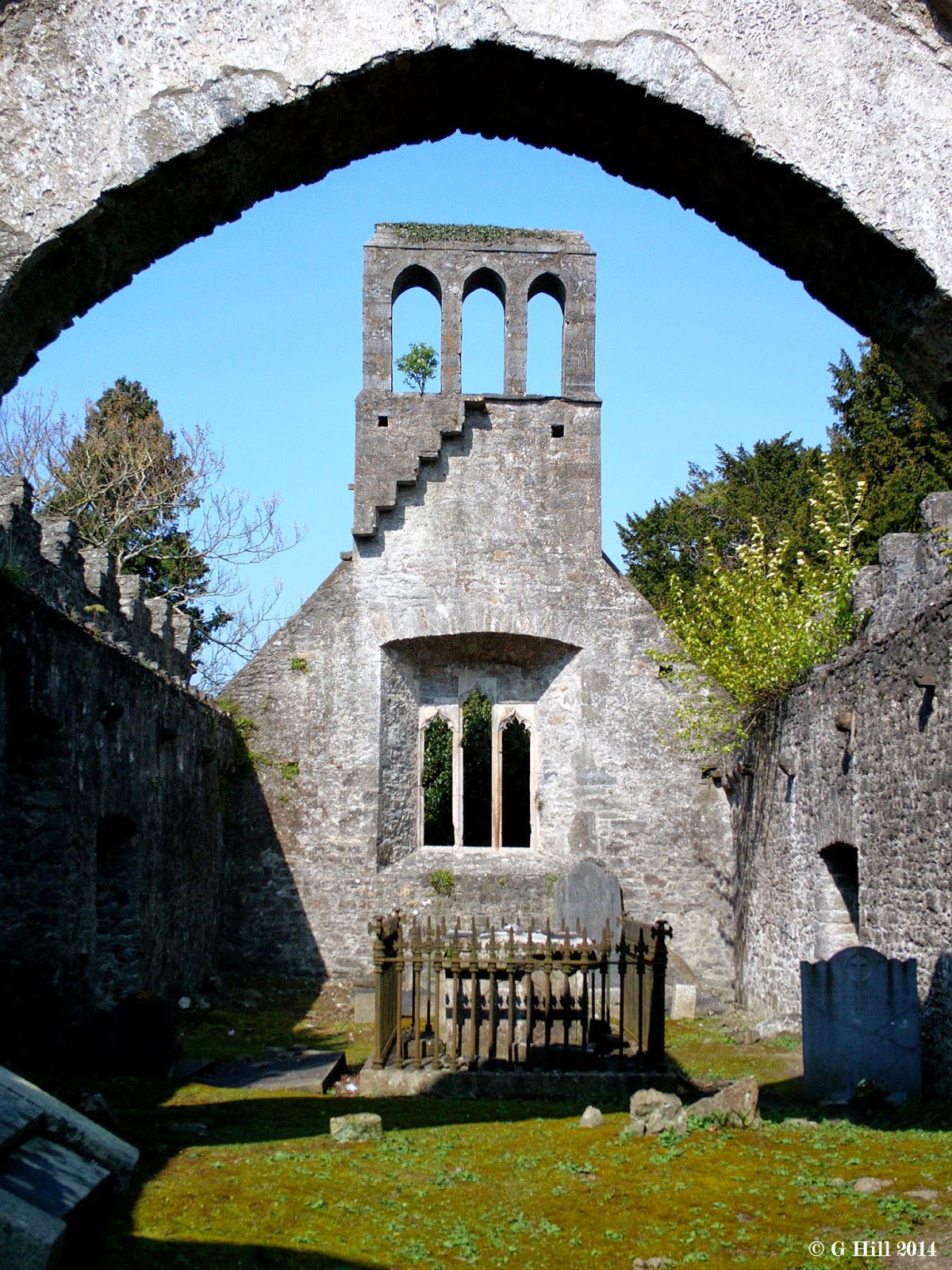 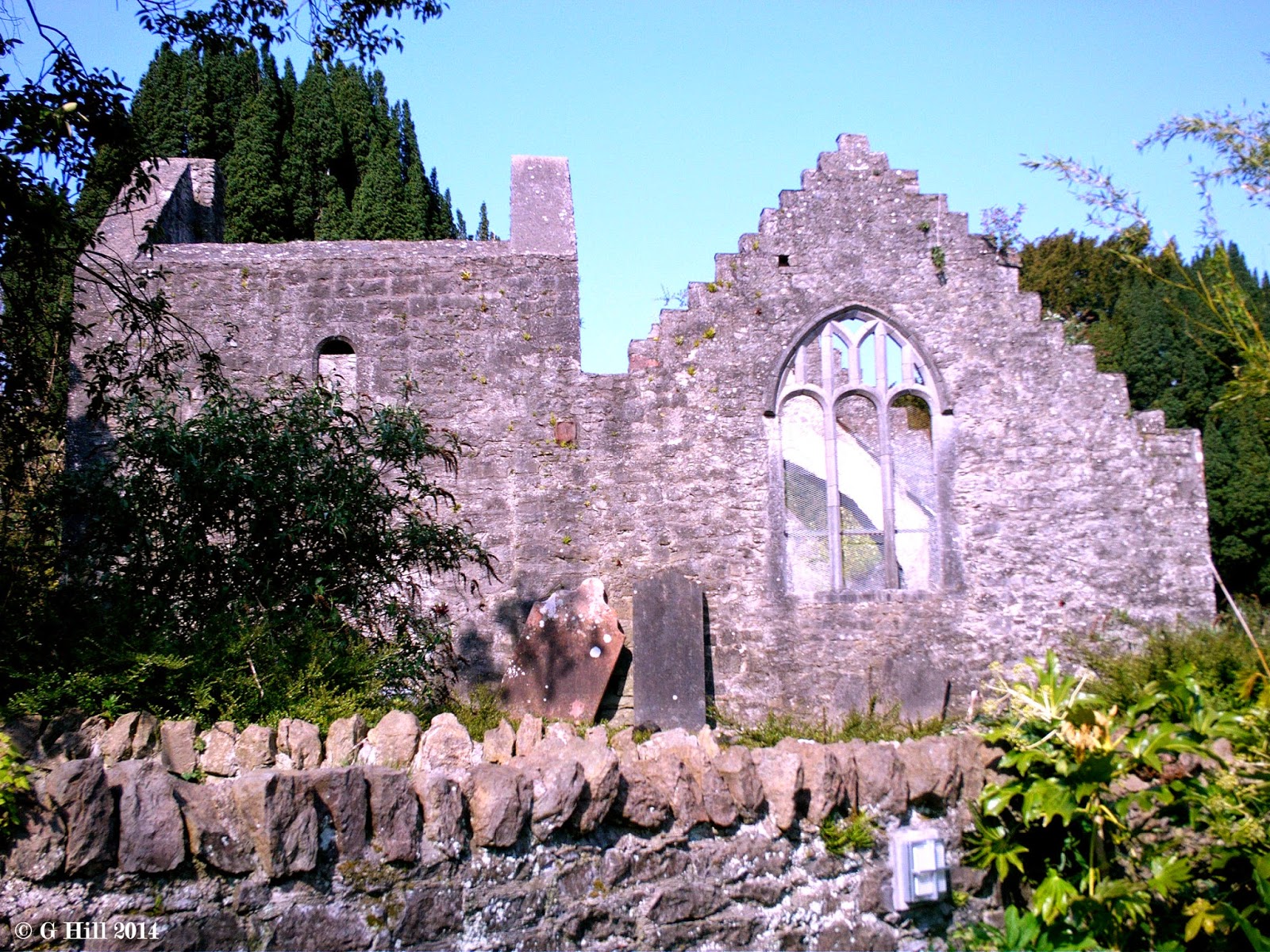 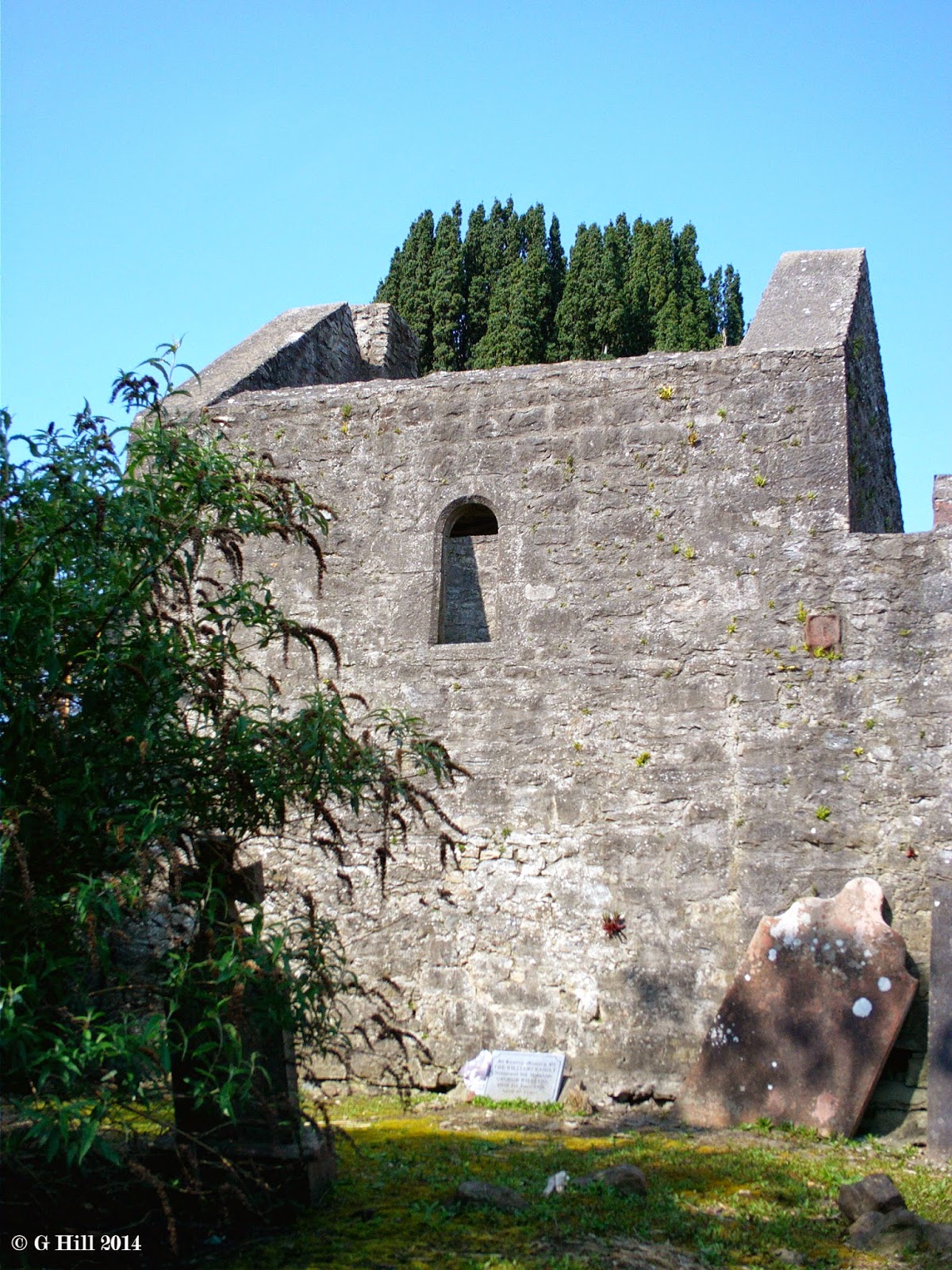 Image Below: The lawn. Follow the wall into the
bushes on the right. 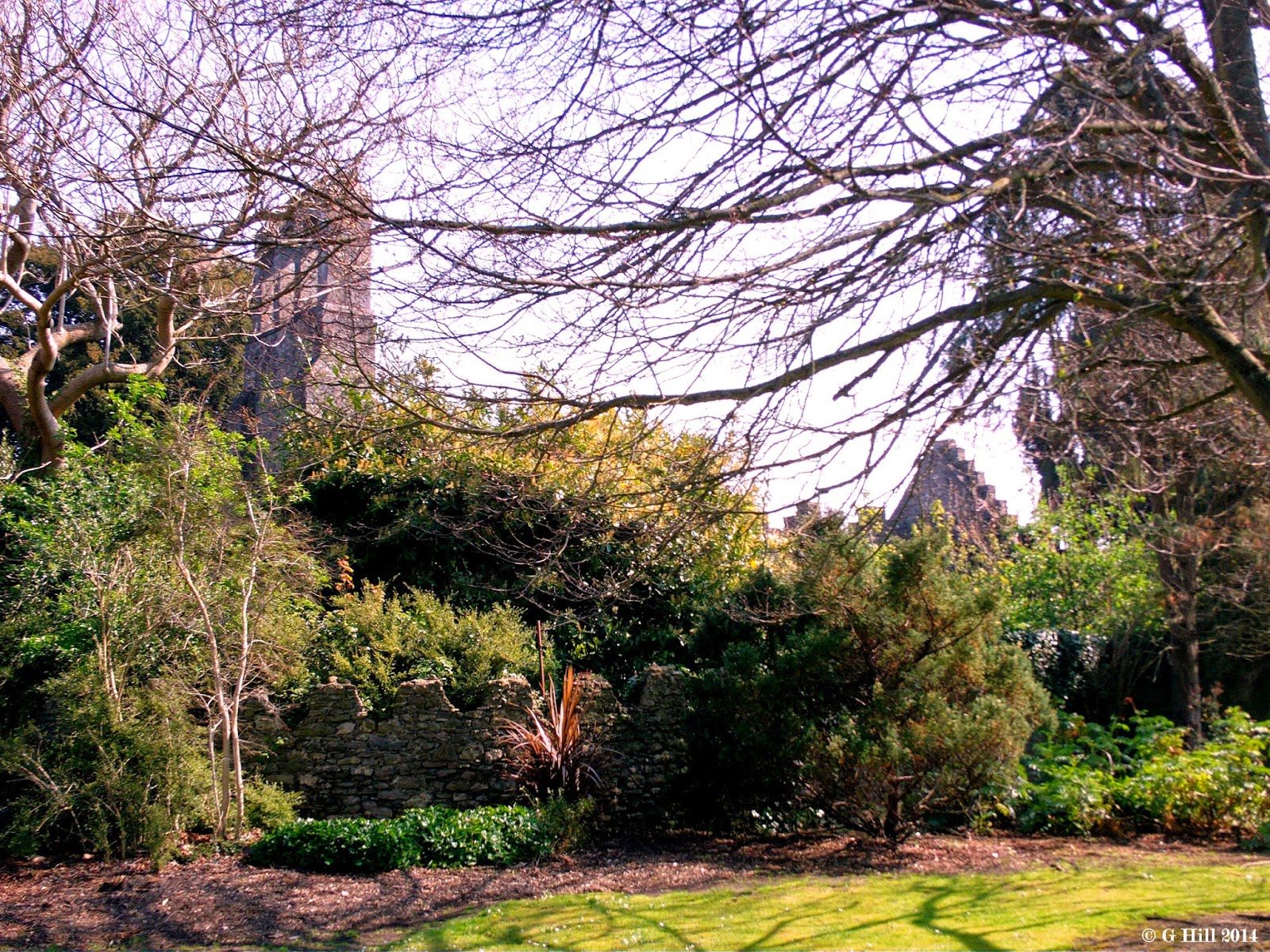 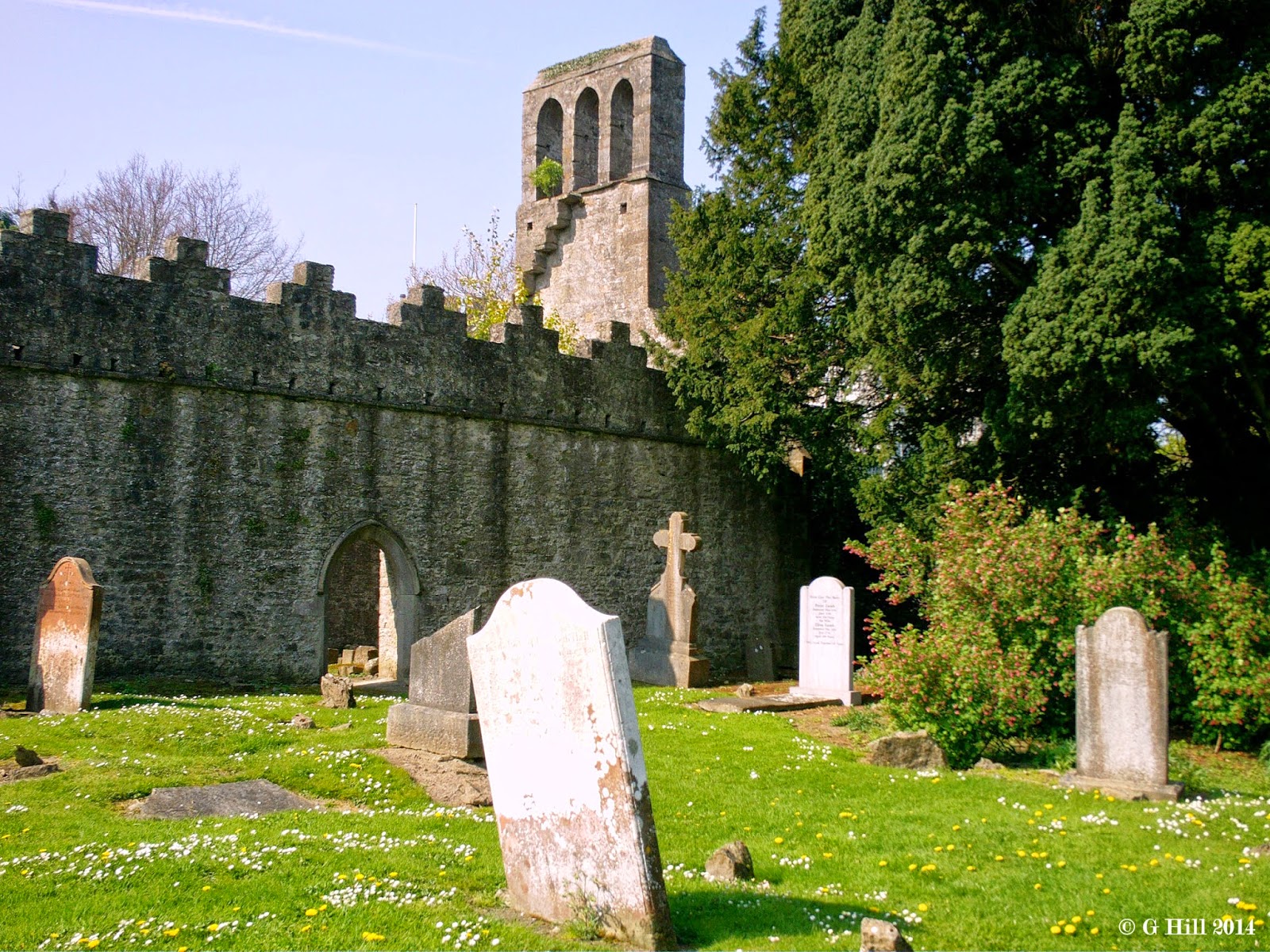 Situated in the picturesque grounds of Malahide Castle which was built for Richard Talbot by Henry II in 1185 are the ruins of Malahide Abbey. There was an ancient Church nearby to the Castle called St. Fenweis but this large later medieval structure may have been built upon this site. the Abbey flourished under the influence of the Talbots and was probably used as a parish church until the dissolution.
I had visited Malahide Castle many years ago and wasn't aware then of the existence of the Abbey ruins so when an opportunity arose recently and on a sunny late spring morning, I found myself amongst the throng of visitors wandering around.
These attractive ruins are very striking on first view, so full of anticipation I was suddenly disappointed to find the access gates well and truly locked. The enclosure wall wasn't too high but I don't think that the wardens would be in favour of someone clambering over it. So leaving the tourists frustratedly trying to get the best photos they could, I took a stroll around the perimeter finally finding a grassy lawn on the side near the Castle entrance. I continued to follow the line of the Abbey wall until nearly three quarters the way around it disappeared into some bushes. I followed suit through the bushes and found that the ground level here was much more in height to the wall. This spot was adjacent to the lane way that led from the car park to the ruins so I waited for some people to pass and then quickly hopped over the wall. I'm sure as I headed around to the Abbey doorway that some people were probably wondering how I got in. I moved swiftly so not to draw as little attention as possible.
The Abbey grounds contain the family tomb of the Talbots and within the ruins also is the tomb of Maud Plunkett who married Richard Talbot and died in 1482. All of the Abbey walls stand and contain a nave and chancel handsomely divided by a Gothic arch. There is a fine decorative East window and a second Gothic window beneath the belfry tower. The tower itself rises majestically jutting above the surrounding trees outside. The ruins are often referred to as an Abbey but it more likely that this in its time was more of a large Church. The affluent Talbot family would no doubt have been patrons.
I took some time to have a good look around discovering other things such as a mitred head carved above the Southern doorway. I would have liked to have stayed there longer as it was so peaceful and great to see the ruins without distraction, but I thought it probably wise to move back to my exit point as I had achieved what I had come to do. I don't know if it's the Castle's policy to keep the Abbey gate locked at all times but I really don't think it would present a problem for people to have a closer look
To find the ruins take the M50 motorway Northbound and at Junction 3 take the exit for the R139. 400m later go straight through the next big roundabout and continue on down the R139 until you reach a crossroads with the R107 (Malahide Road). Turn left here and drive for approx.5KM until you see a right hand turn with the gates and a colourful sign for Malahide Castle & Park. Turn right but do not enter the gates here. Continue on this road which is called the Back Road for approx. 700m and you will see the entrance drive to the Castle on your left. At the end of the drive there is a free car park on the right. Walk back out of the car park and follow the lane to the right towards the walled garden. You will eventually see the Abbey ruins on your left.
Posted by Castlehunter at 14:53