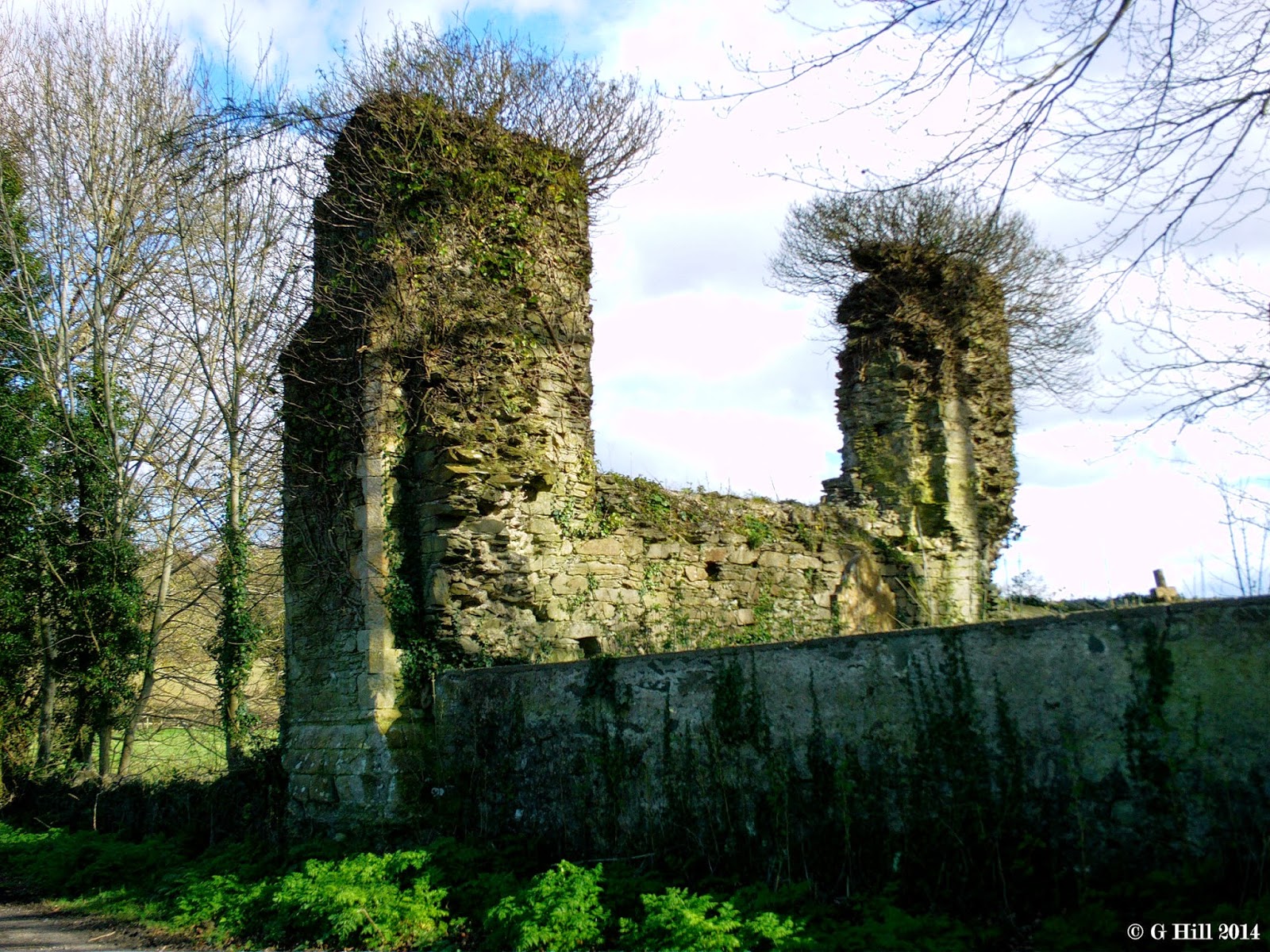 Above Image: The last remains Above Image: Entrance to Abbey graveyard 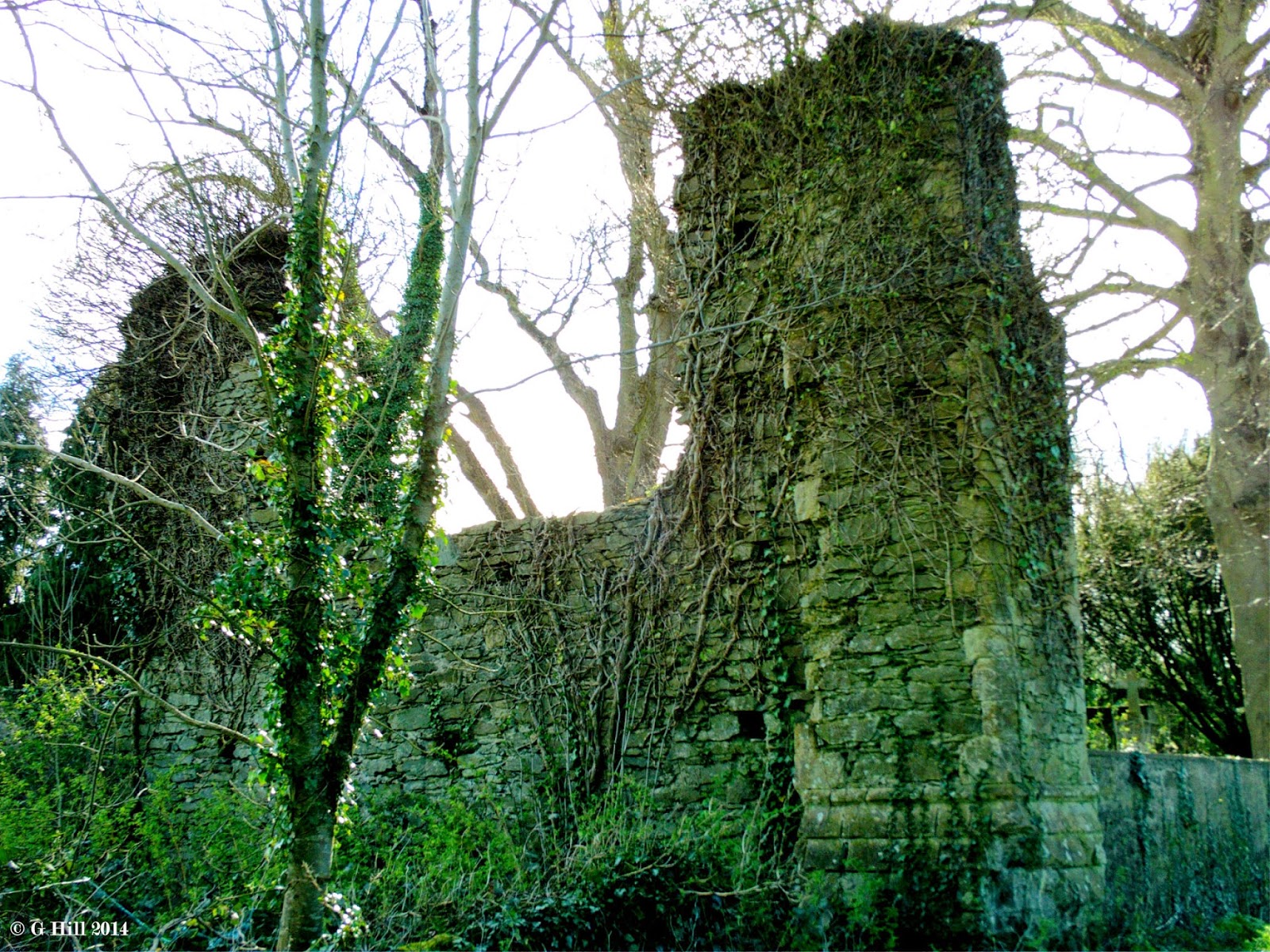 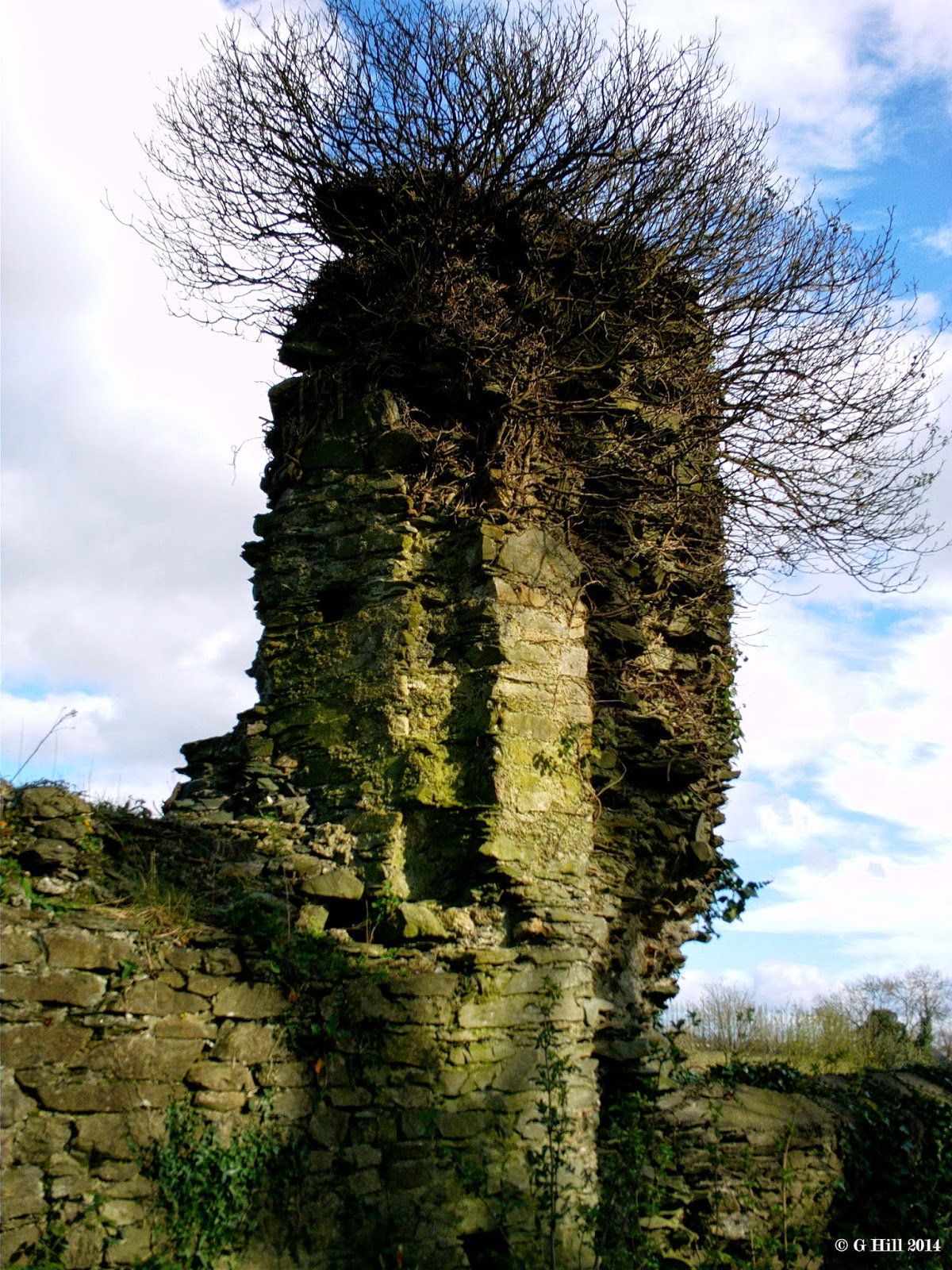 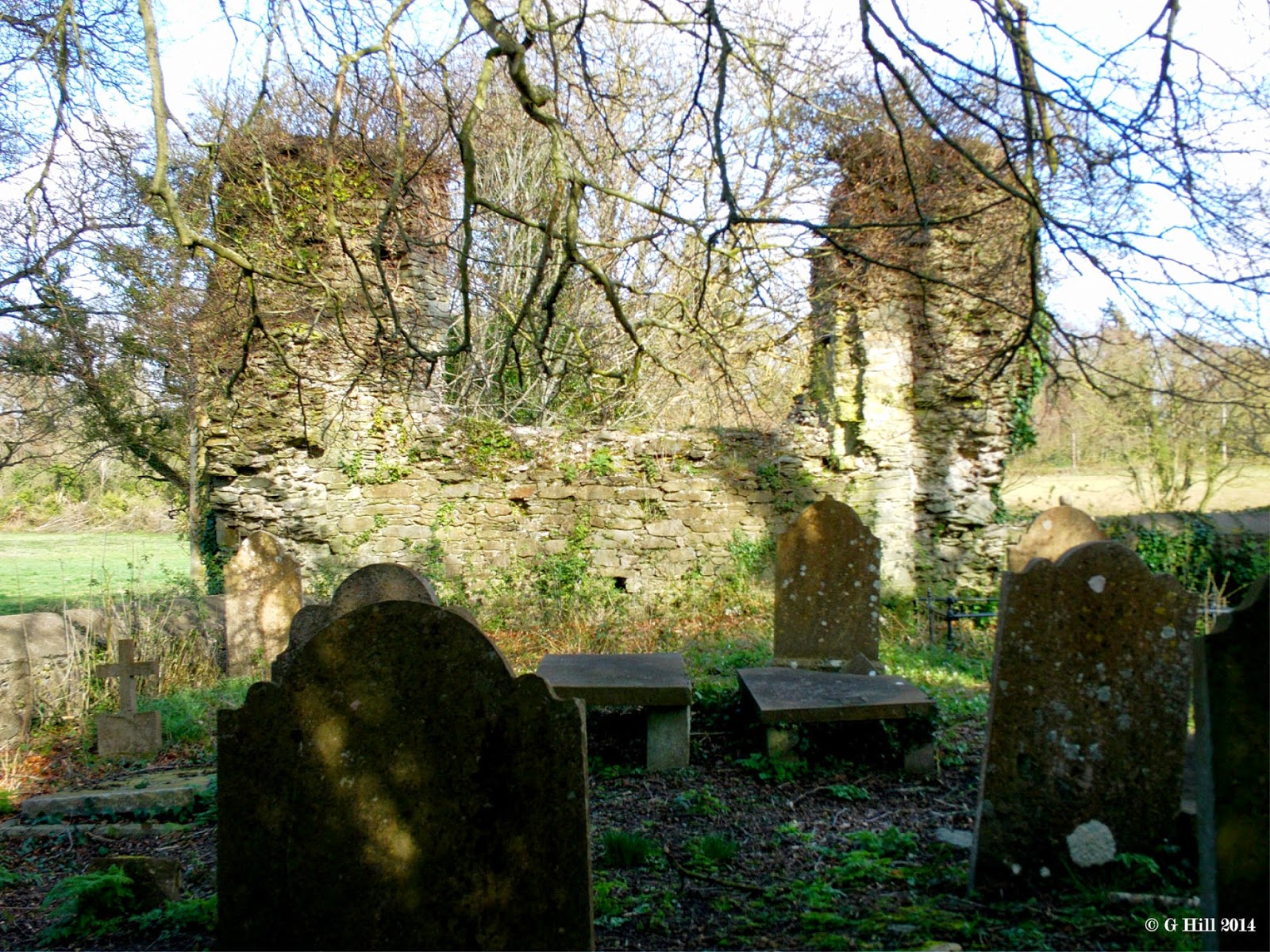 Above & Below Images: View of the Abbey remains from
within the graveyard 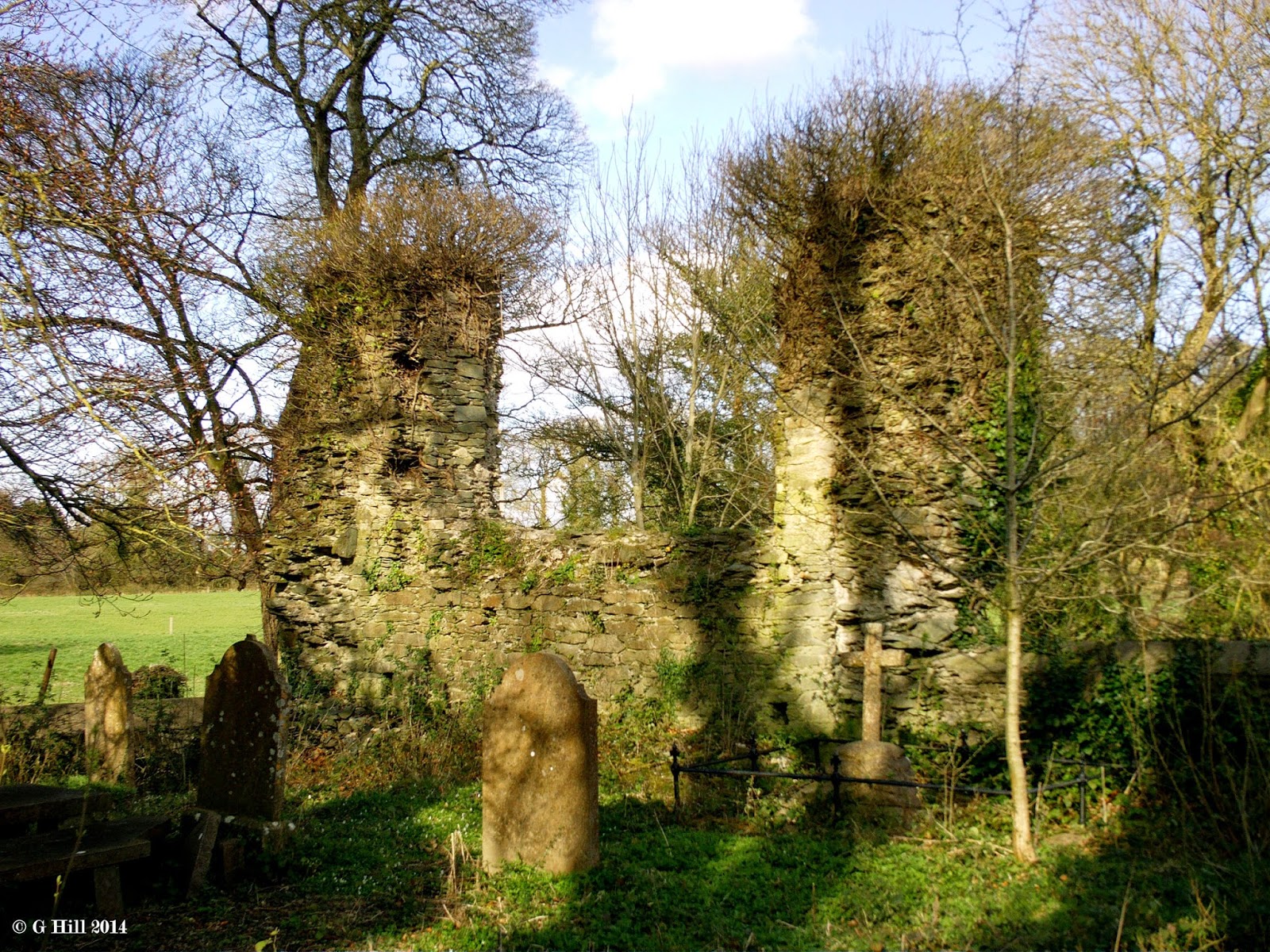 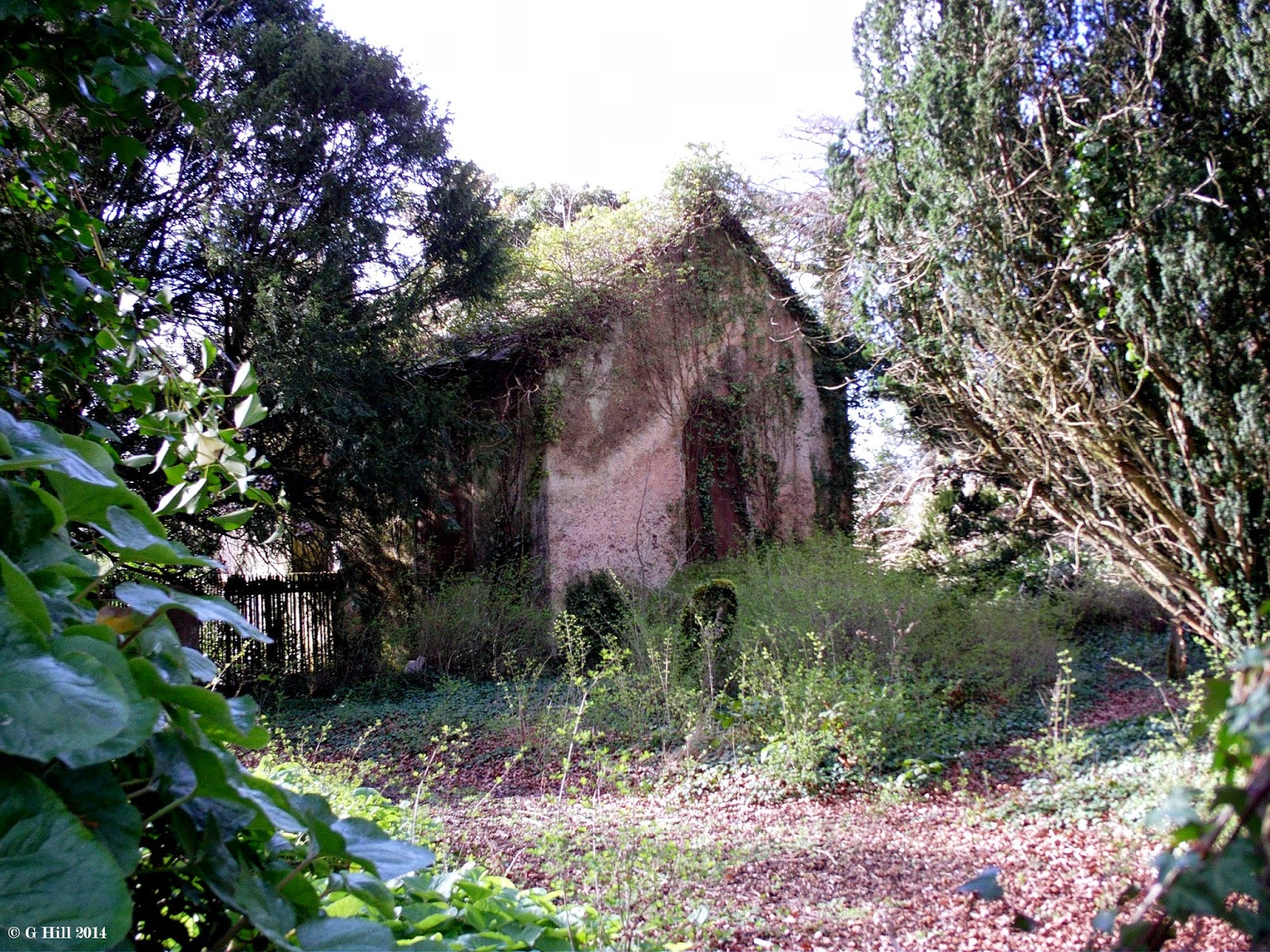 Above Image: The ruined Church 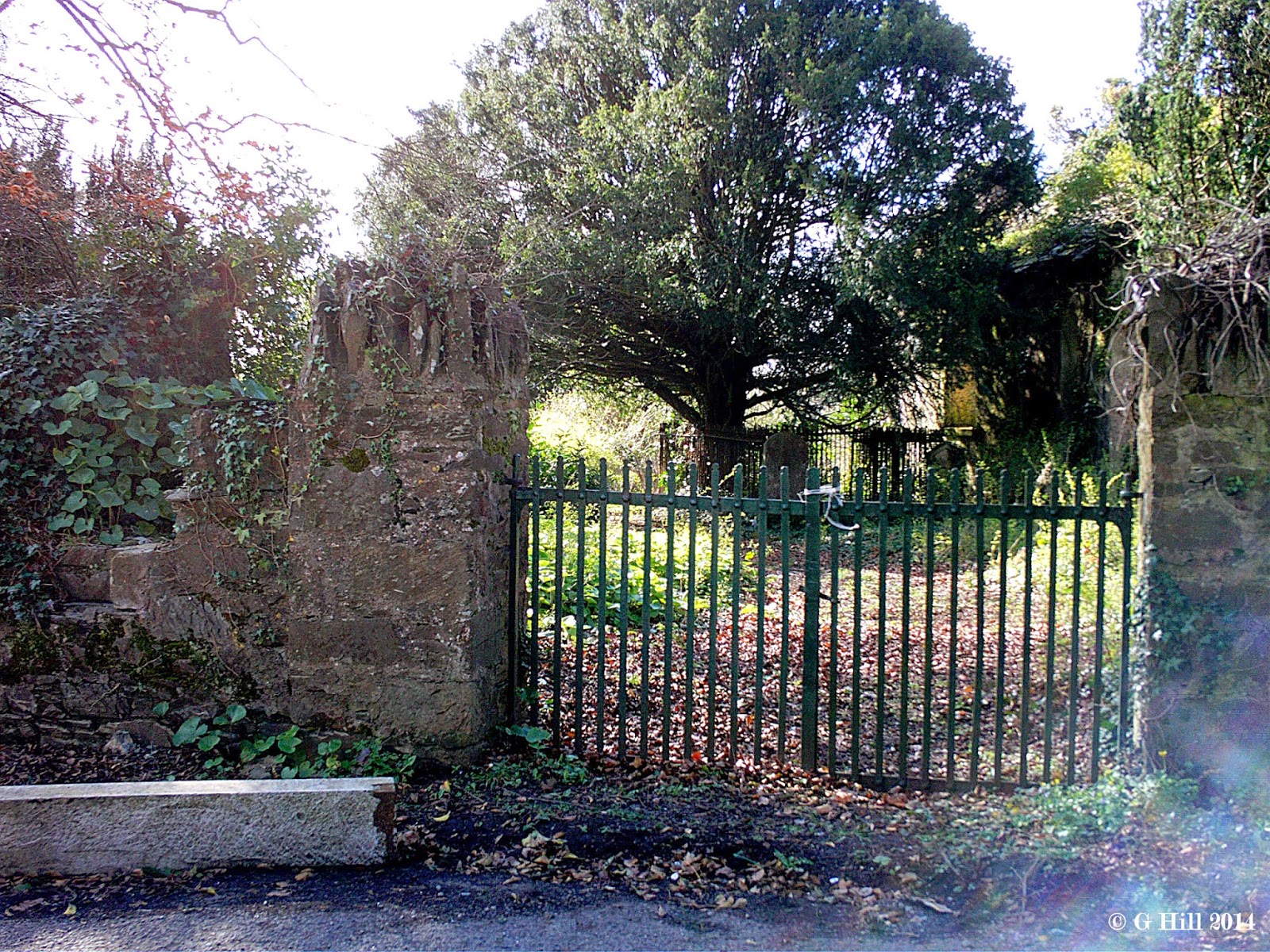 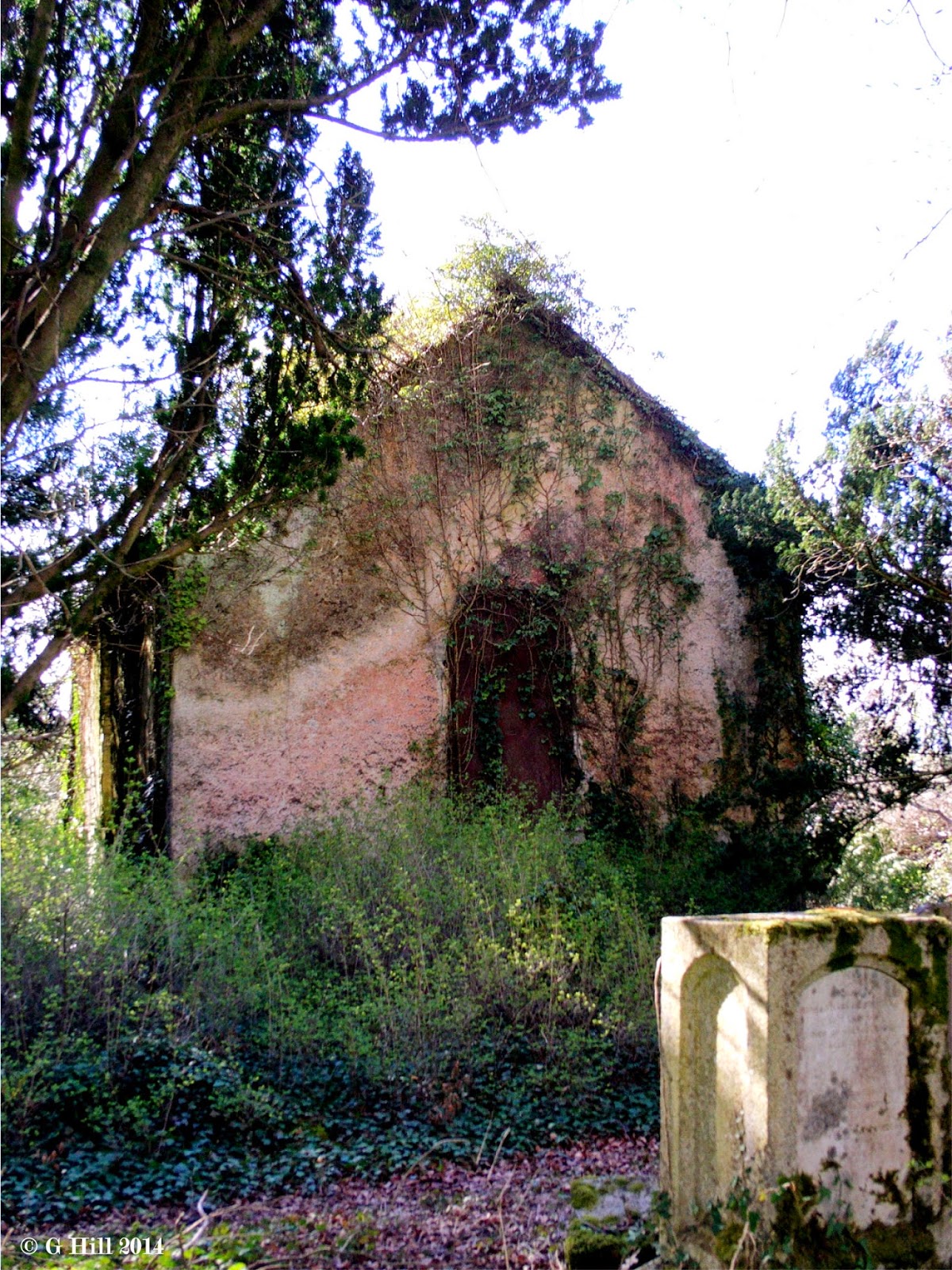 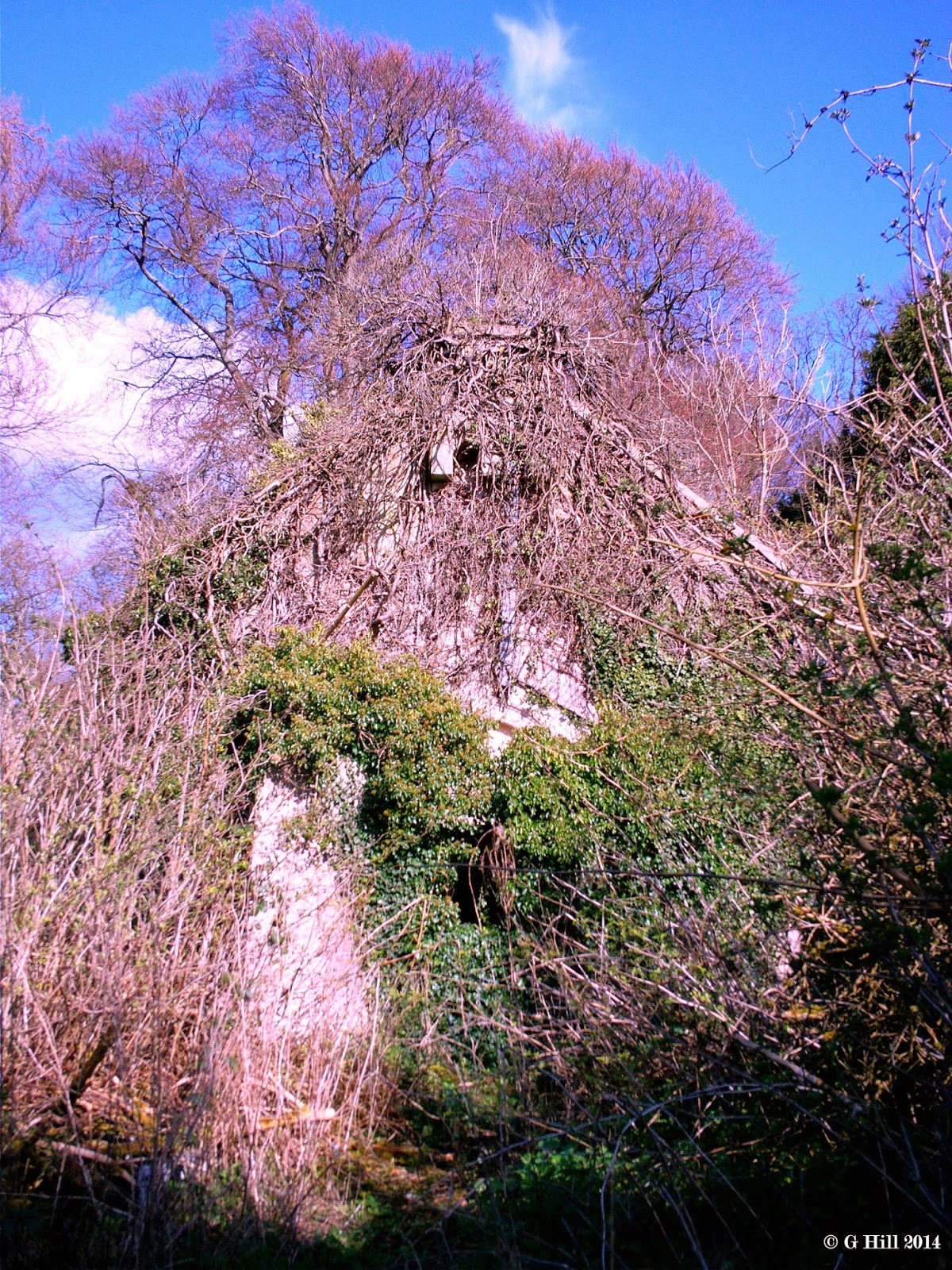 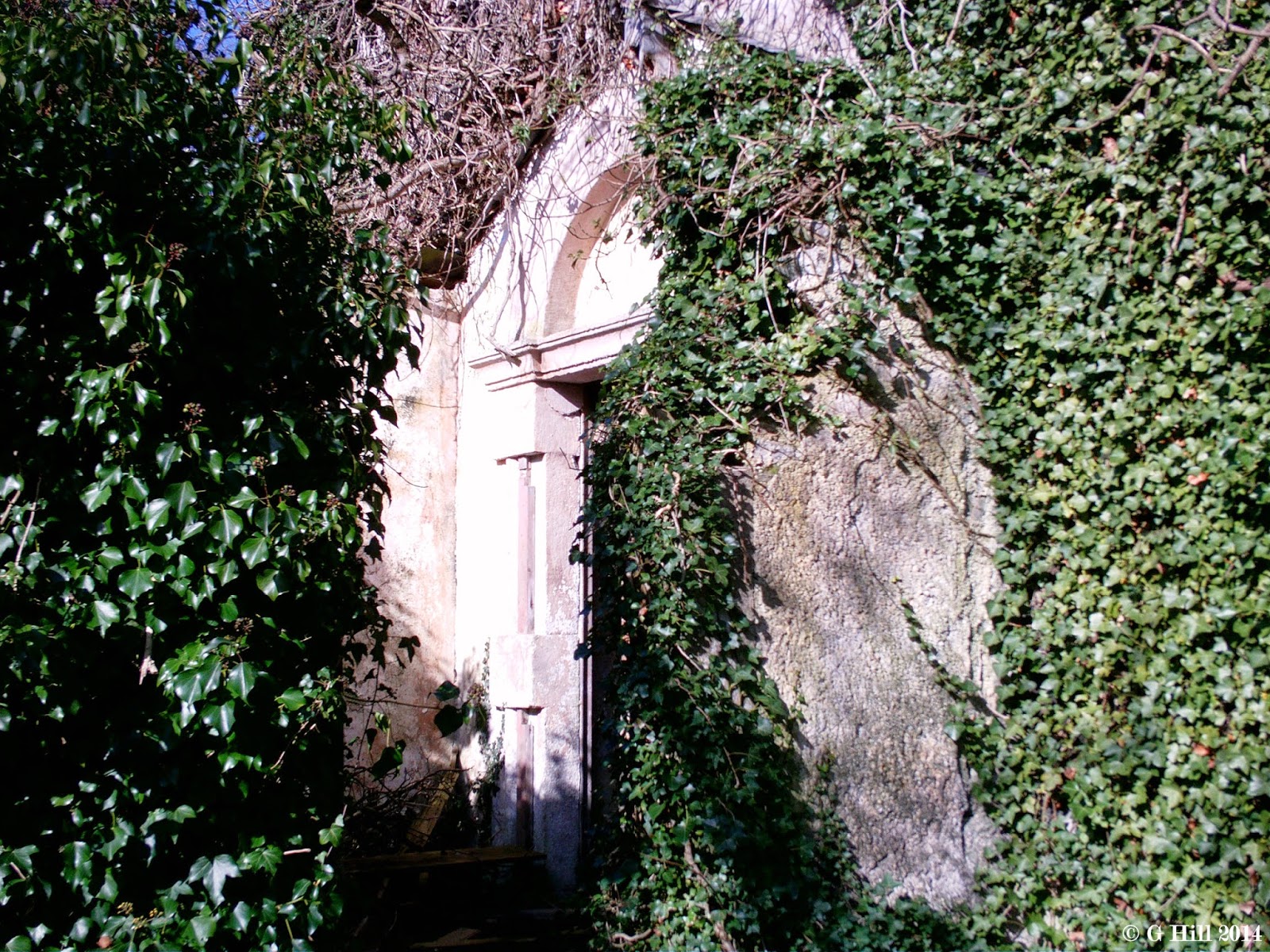 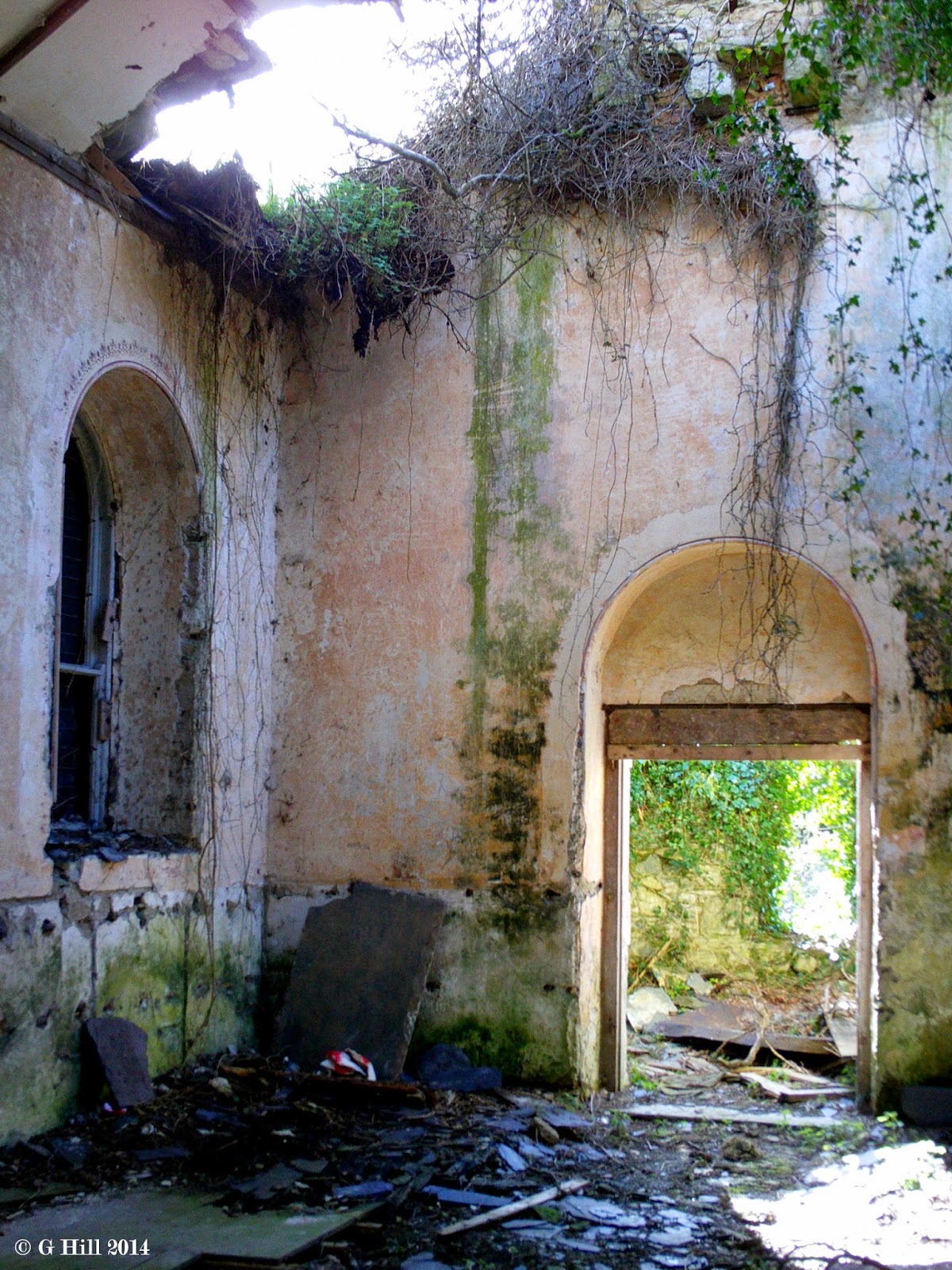 Above & Below 2 Images: The Interior 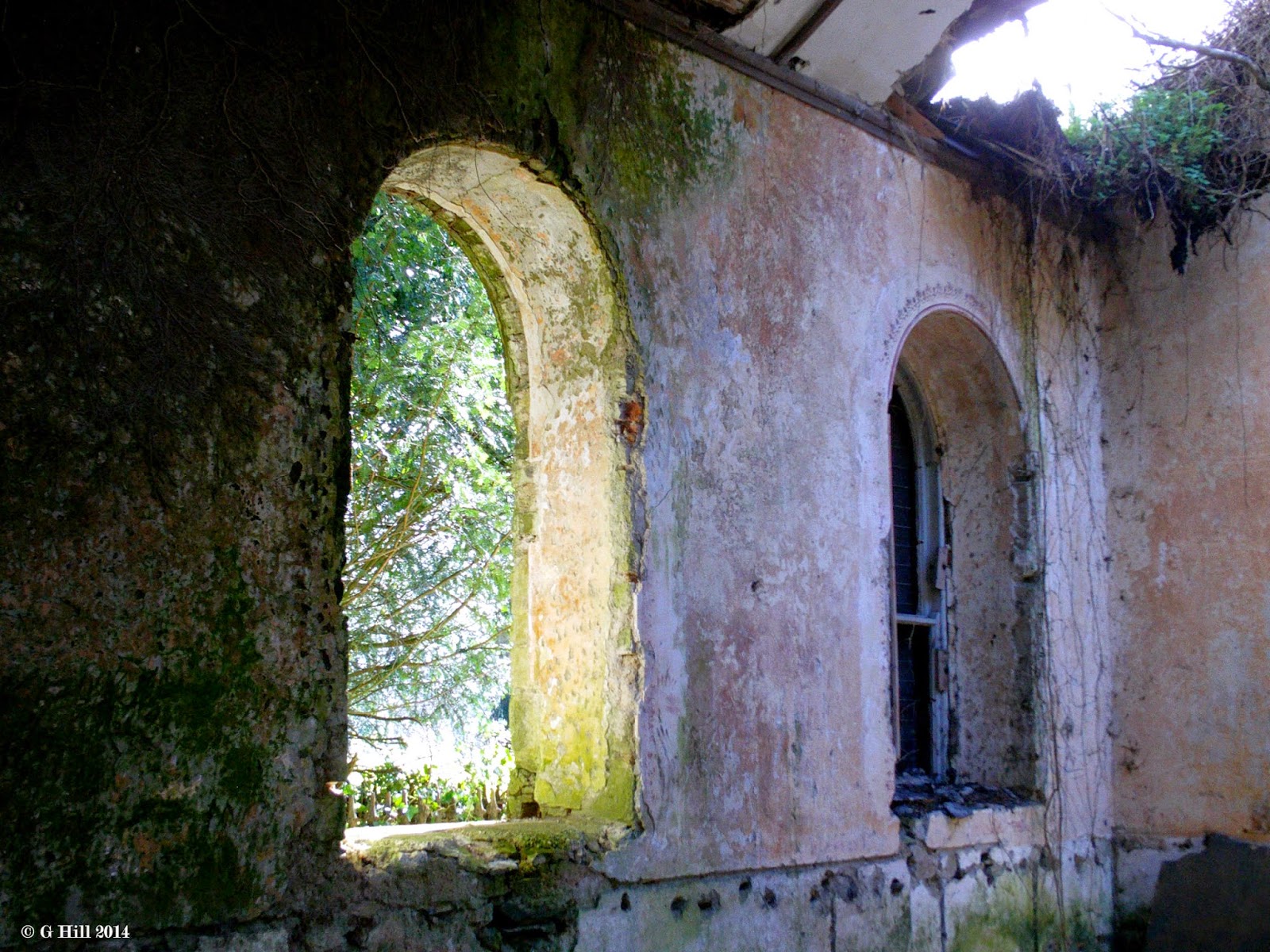 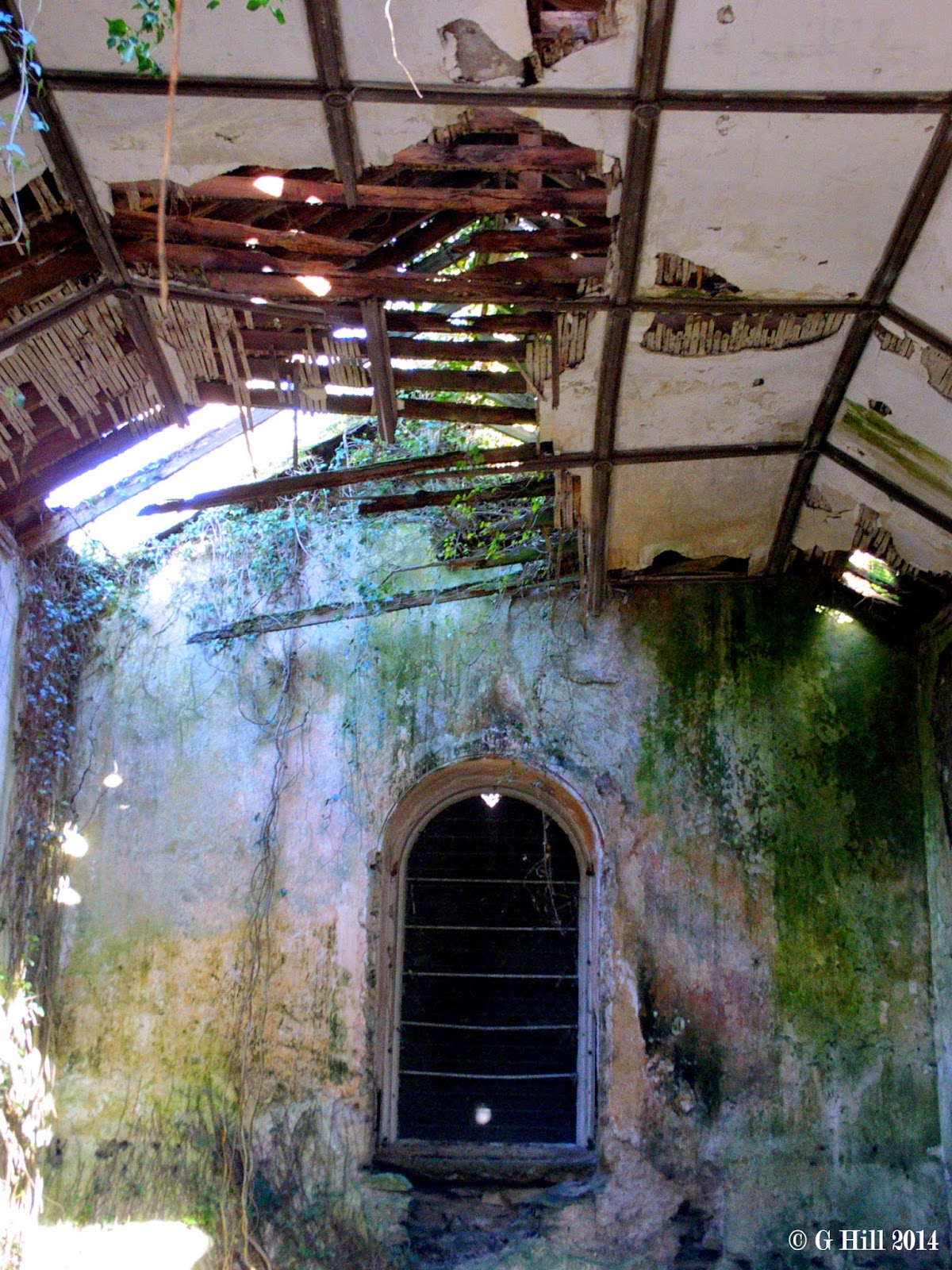 Founded in 1202 by Myler Fitzhenry for the an Augustinian order from Wales, Great Connell Abbey was built near a ford in the River Liffey called Connell Ford, which being an important crossing point may also have possibly been a part of the Slighe Dhala one of the five ancient routes from Tara. The Abbey was dedicated to St Mary and St David and was to become the principal Abbey of The Pale acquiring a great deal of land and wealth. Fitzhenry himself spent the last four years of his life within the monastery until his death in 1220.
In 1380 Richard II passed a law which forbade Great Connell from admitting any Irishmen into it's order but there is evidence that this was not always the case. When the Suppression of Abbeys arrived, Great Connell became one of its victims being dissolved in 1541 and the lands being passed to John Sutton. The Abbey slowly fell into a ruinous state and is documented in 1781 to have little of note upstanding and indeed within 20 years most of the stone remaining was removed to construct the British Cavalry barracks in nearby Newbridge.
The remains of the Abbey today are scant but along with a small ruin of a later Church adjacent, are well worth seeking out.
A country road from Newbridge called Connell Drive will get you to the right spot. There is a large gateway blocking a lane way which has a pedestrian stile in it. About 100m up this lane on the left lies an old graveyard which is enclosed by four walls. The Western wall has an arched gateway through which you can enter. What remains of the Abbey forms the Eastern boundary wall. The ancient stones have vegetation springing up from them but are obviously of older origin than the other walls. This wall that is left is believed to be the Eastern wall of the Abbey's Lady Chapel. Standing in this old graveyard on a golden sunlit day with the light reflecting on this wall really evoked a sense of history about it.
Back out at the roadside and to the right of the lane way gate is another graveyard of Victorian age with a walled enclosure. There is a small set of iron gates in the wall which when we visited were only tied up with a piece of cloth. There is an overgrown stile to the left of the gate but it's bottom step is missing.
Inside the enclosure amongst the ancient stones an overgrown pathway leads to the ruins of an 18th century Catholic Church. The windows on the East and North have been barred up but a single window on the South remains open. We walked around the perimeter of the Church and it looked as if there was no way to get a look inside except through the window but then we came across a gap in the overgrowth on the West side which gave access to a small porch entrance where the door had been knocked aside. Inside the Church the floor is strewn with plaster and wood mostly from the latticed ceiling which is till about 60% intact. Also in evidence some empty beer cans, the remnants of some other Un-Church like activity.
The sunlight streamed in through the gaps in the roof and the open window illuminating the interior and showing that this must at one time been a very attractive place especially judging by the plasterwork.
I couldn't find out much about this ruin but it still appeared on the 1897-1913 Ordnance Survey map as "Church". Usually if abandoned it would state "In Ruins". So it may have still been in use up to then. Maybe somebody out there can shed a little more light on this?
To find Great Connell ruins take the M7 from Dublin and take the exit at Junction 10. At the top of the exit ramp turn left and at the following roundabout take the 3rd exit on the right onto the R445 for Newbridge, Drive for approx. 6.5KM and along the way you will encounter two more roundabouts. On the second of these take the first left turn, this is Connell Drive. Continue on down this road straight through the next roundabout and approx. 600m later you come to lane way on your right with a wide closed gate. This is the entry to the Abbey ruins. The gate to the small Church is to the right of this. You can safely park at this spot. 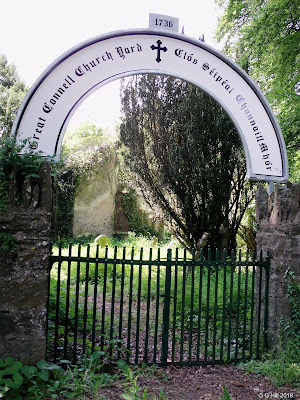 Above Image: An added arch to the entrance 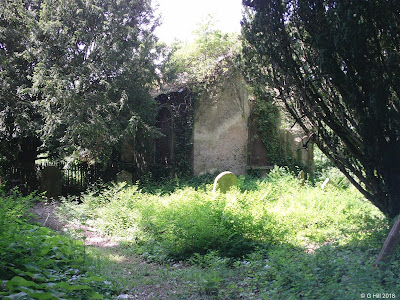 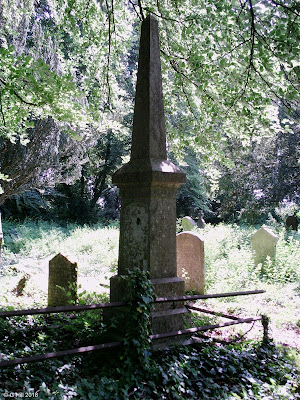 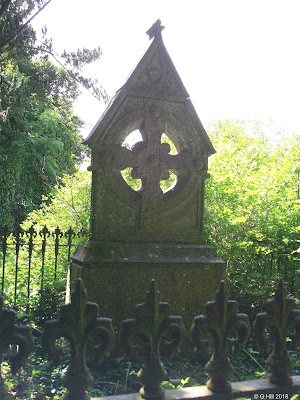 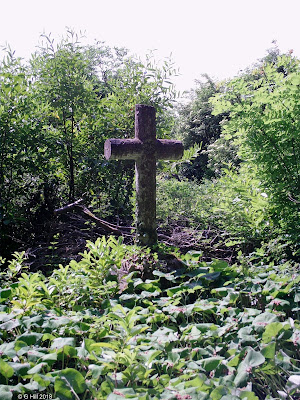 Above 3 Images: Some unusual monuments. the cross above
consists of two logs. 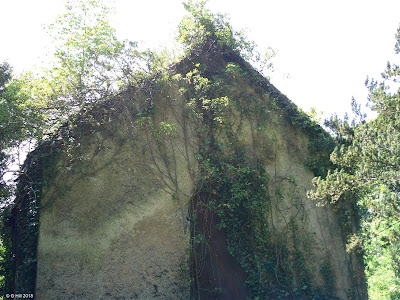 I was passing Great Connell recently and haven't been there since 2014 so I nipped into the old graveyard which is now sporting a new arch with its year of foundation 1736. On my previous visit I was able to gain access to the interior of the old church but this time it was so overgrown at the back and not having a machete with me I decided not to proceed further! If you make a visit bring something to break down the vegetation. I found a number of unusual monuments at the site that I missed first time round. This is a very very atmospheric spot indeed.
Posted by Castlehunter at 20:05