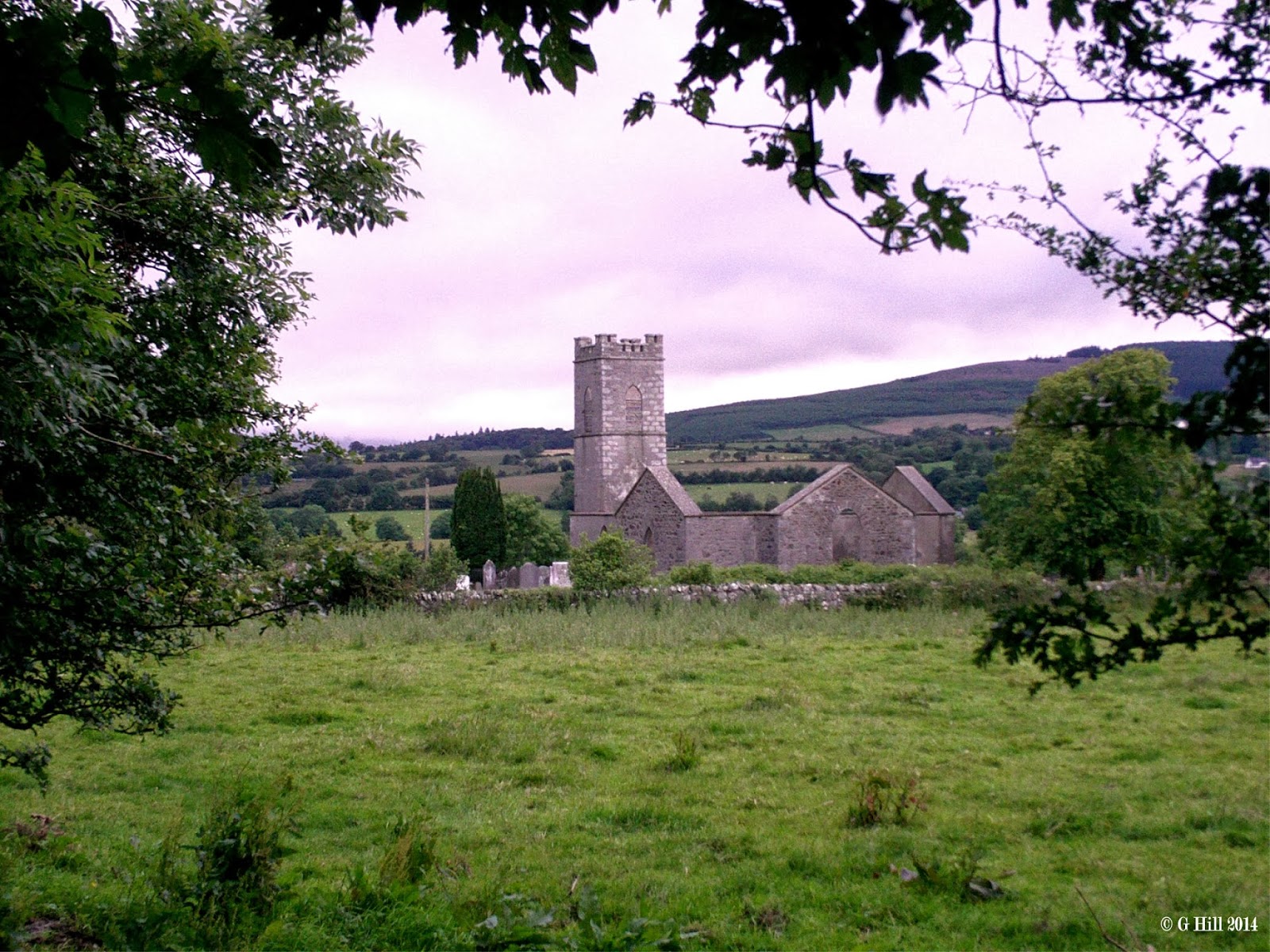 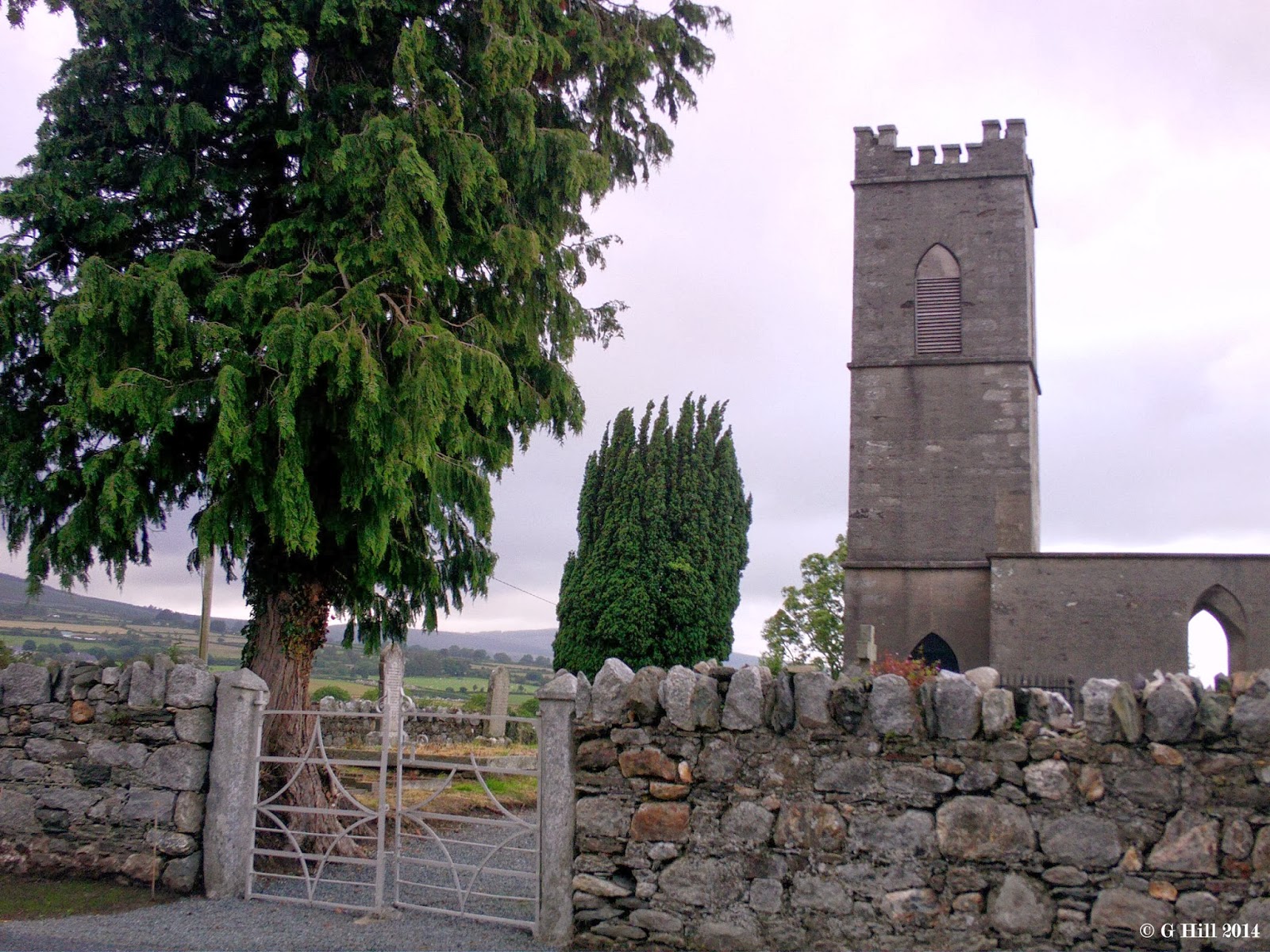 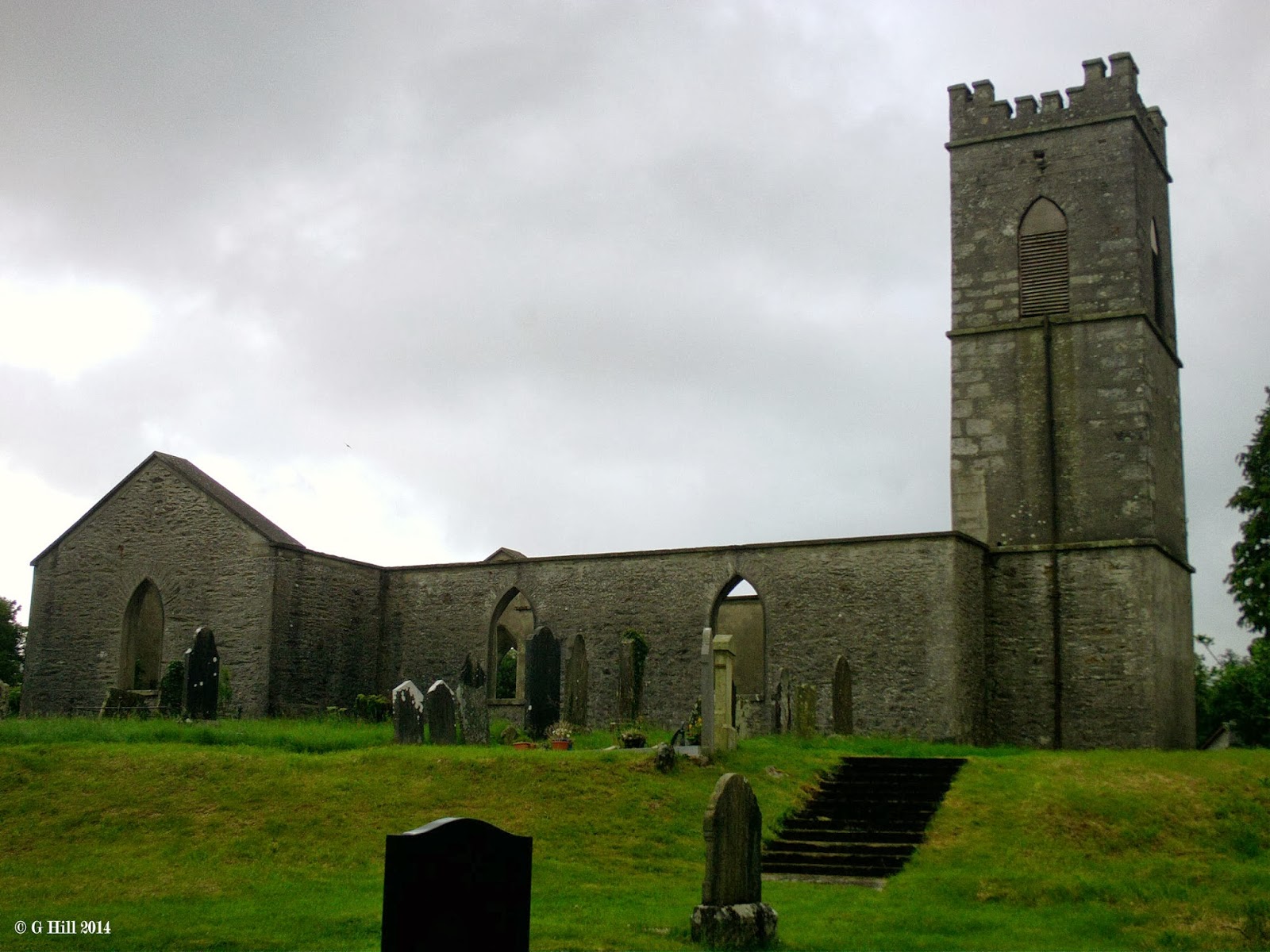 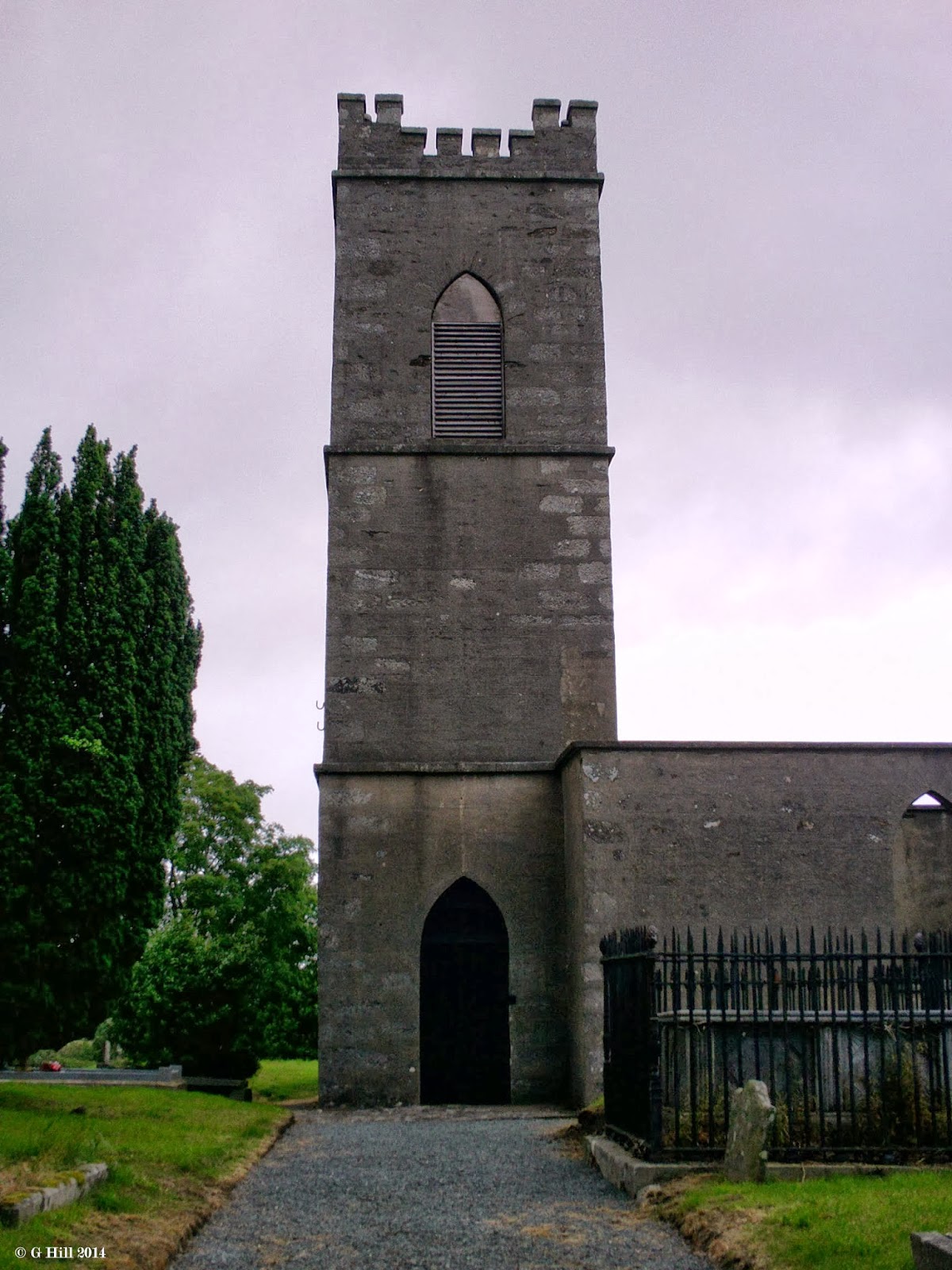 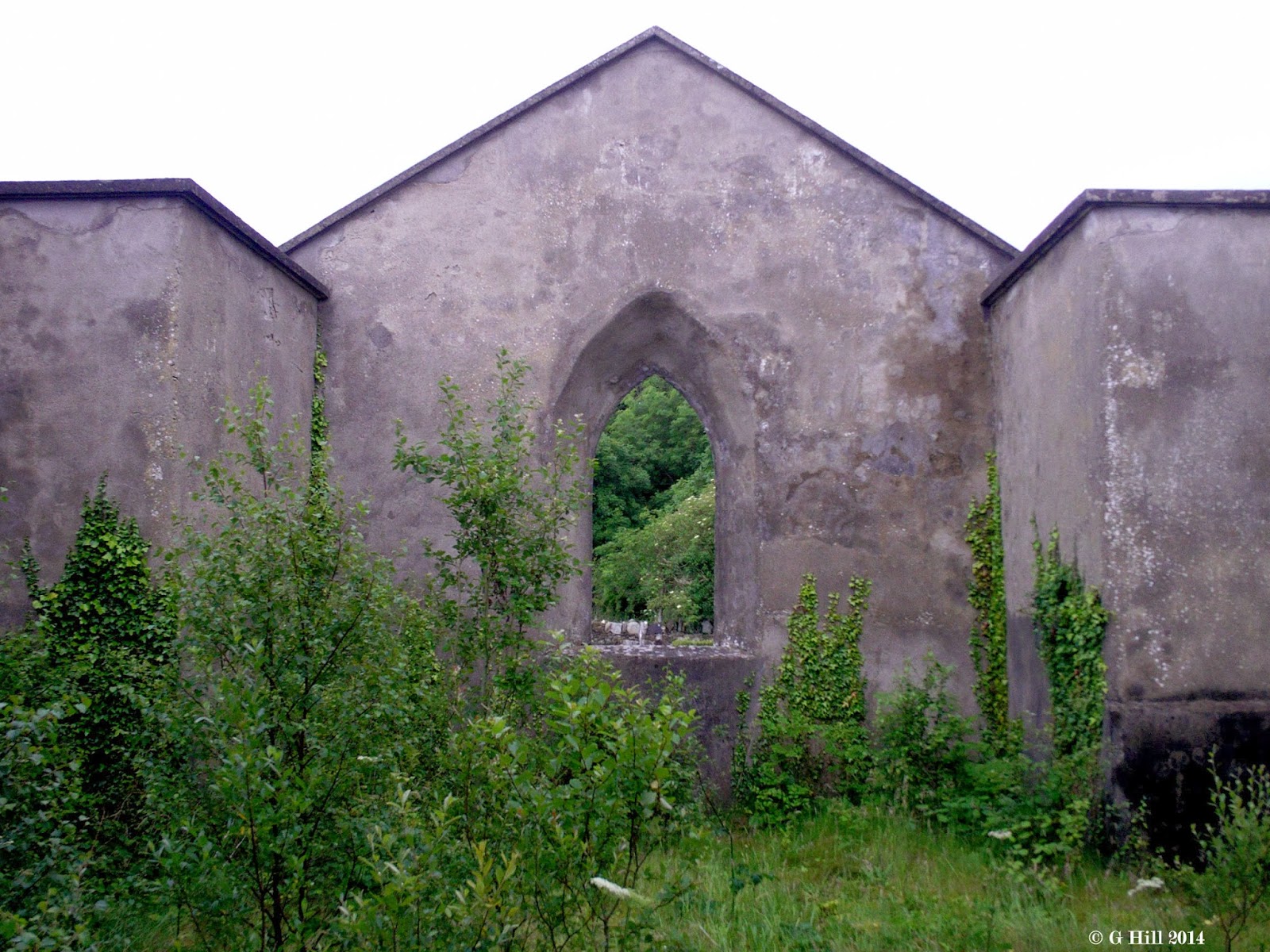 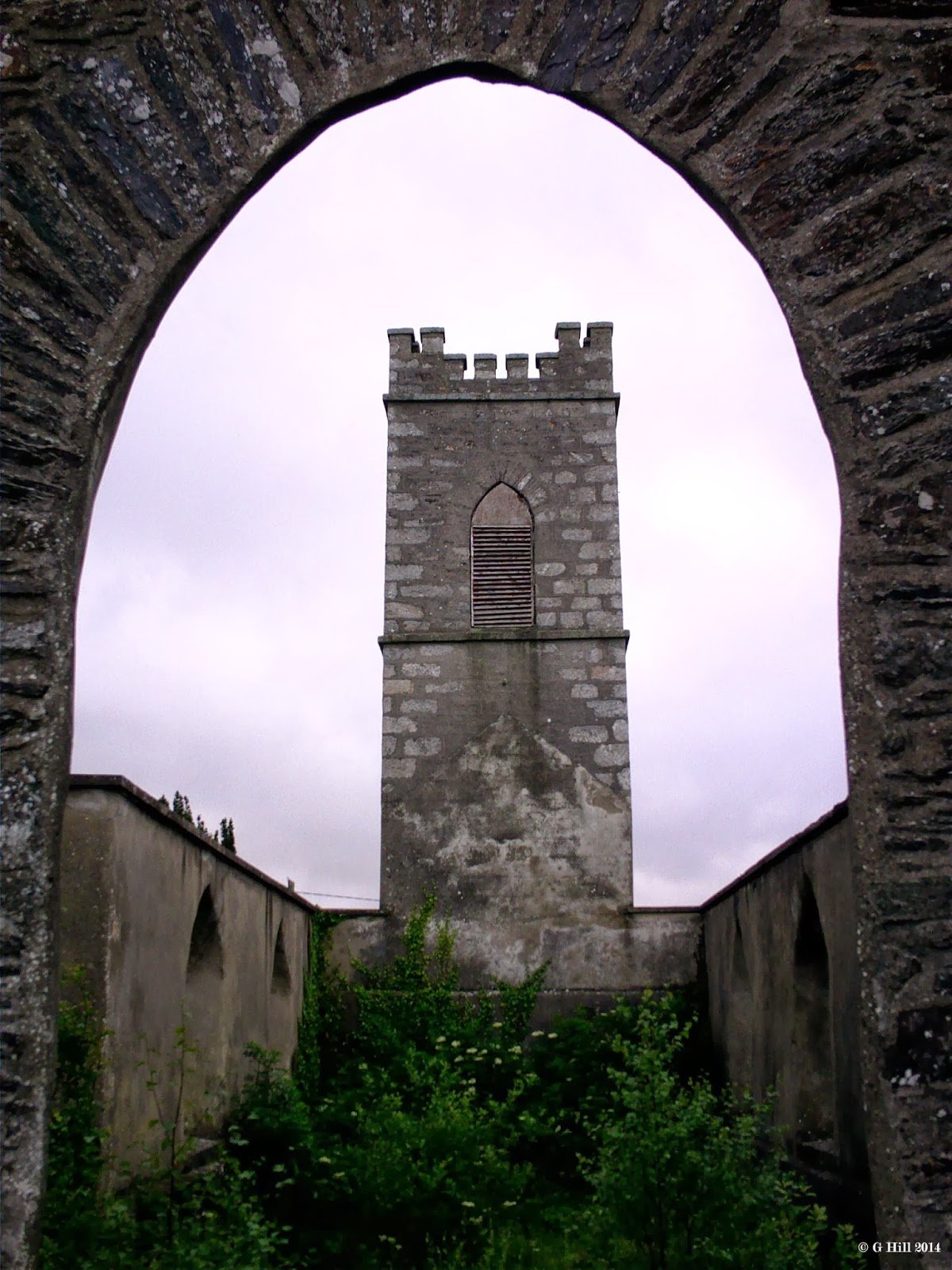 Above Image: View of the interior 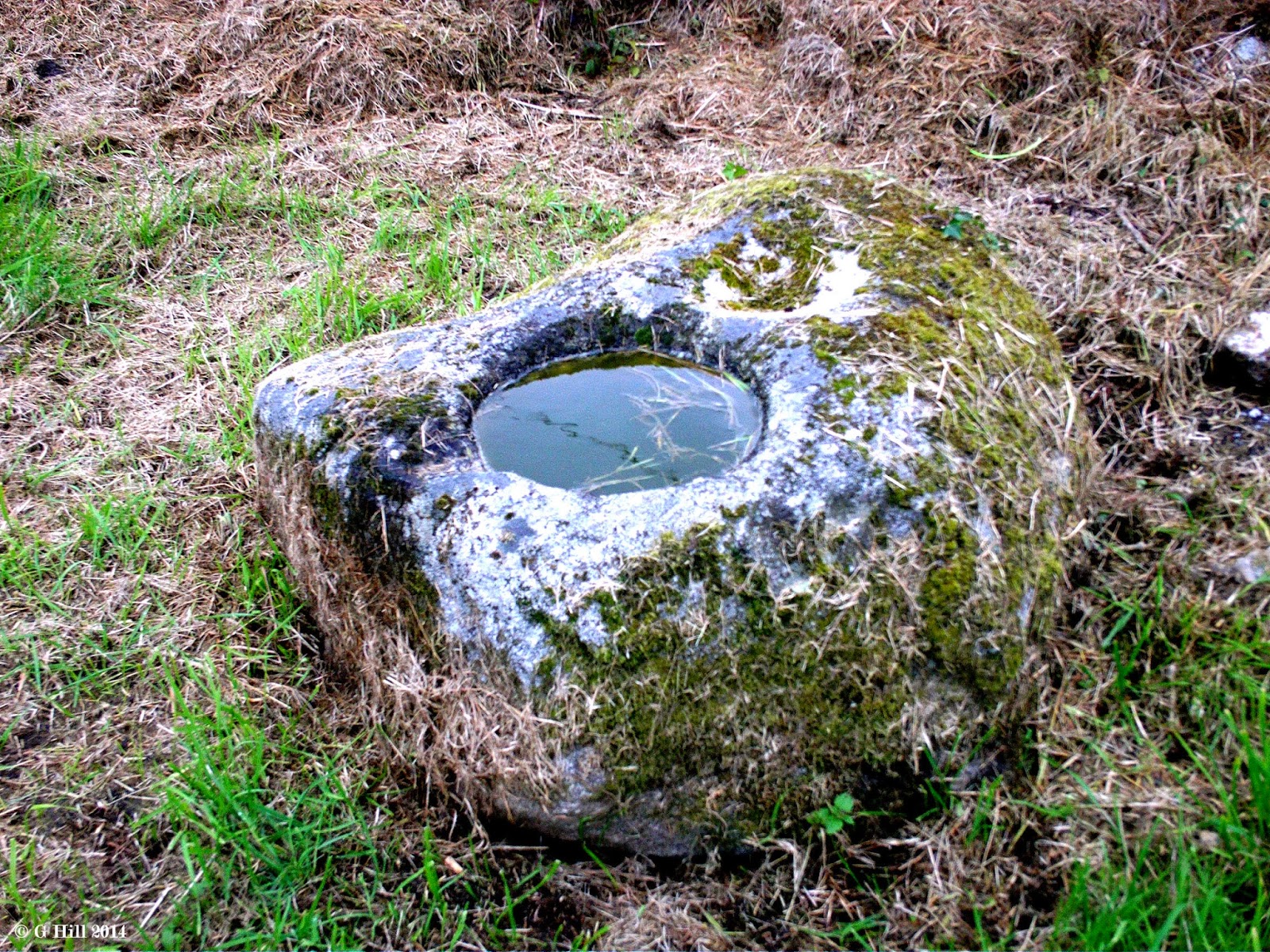 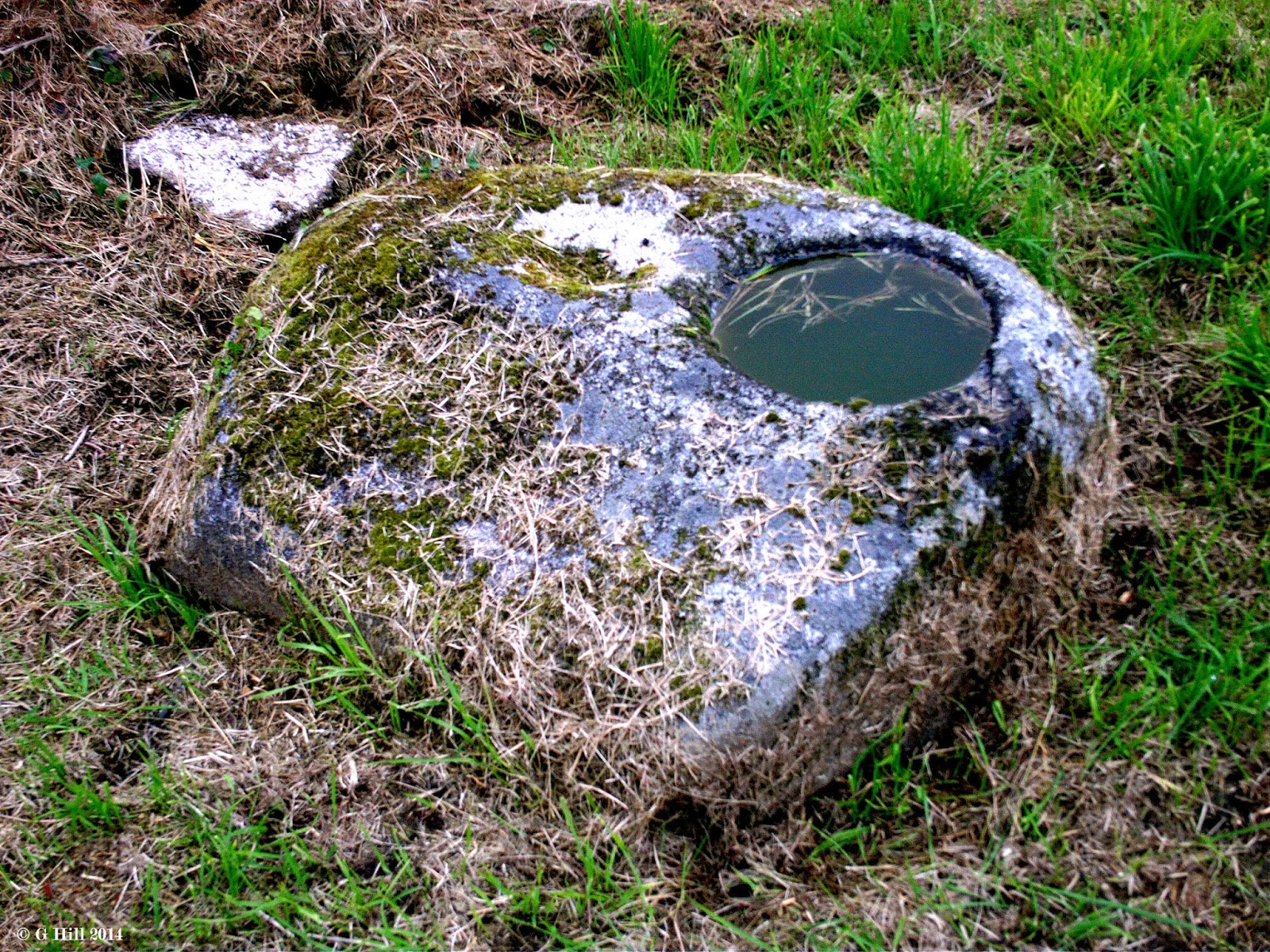 Above 2 Images: The bullaun within the grounds 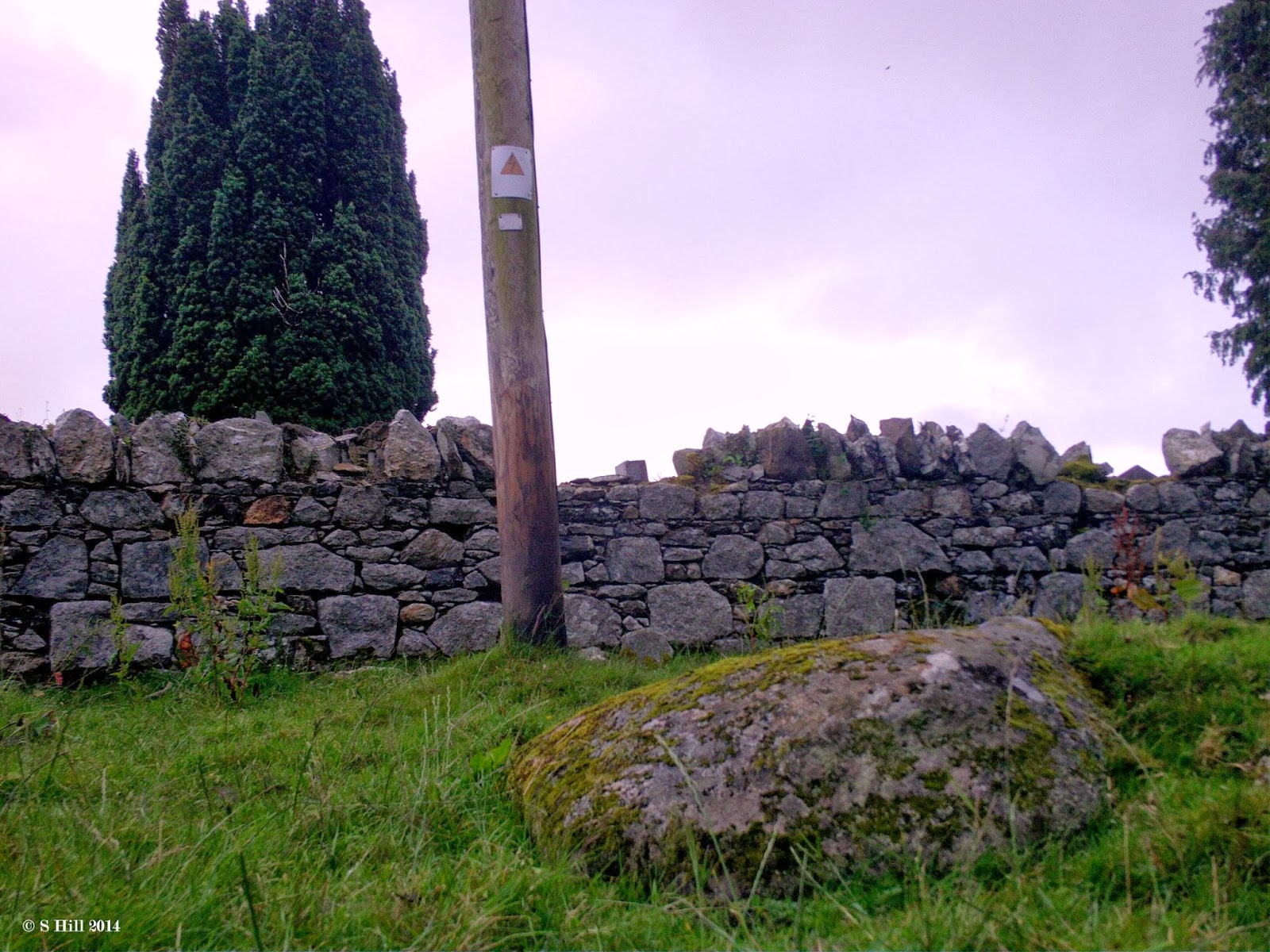 Above Image:  The proximity of the outer bullaun to the West wall 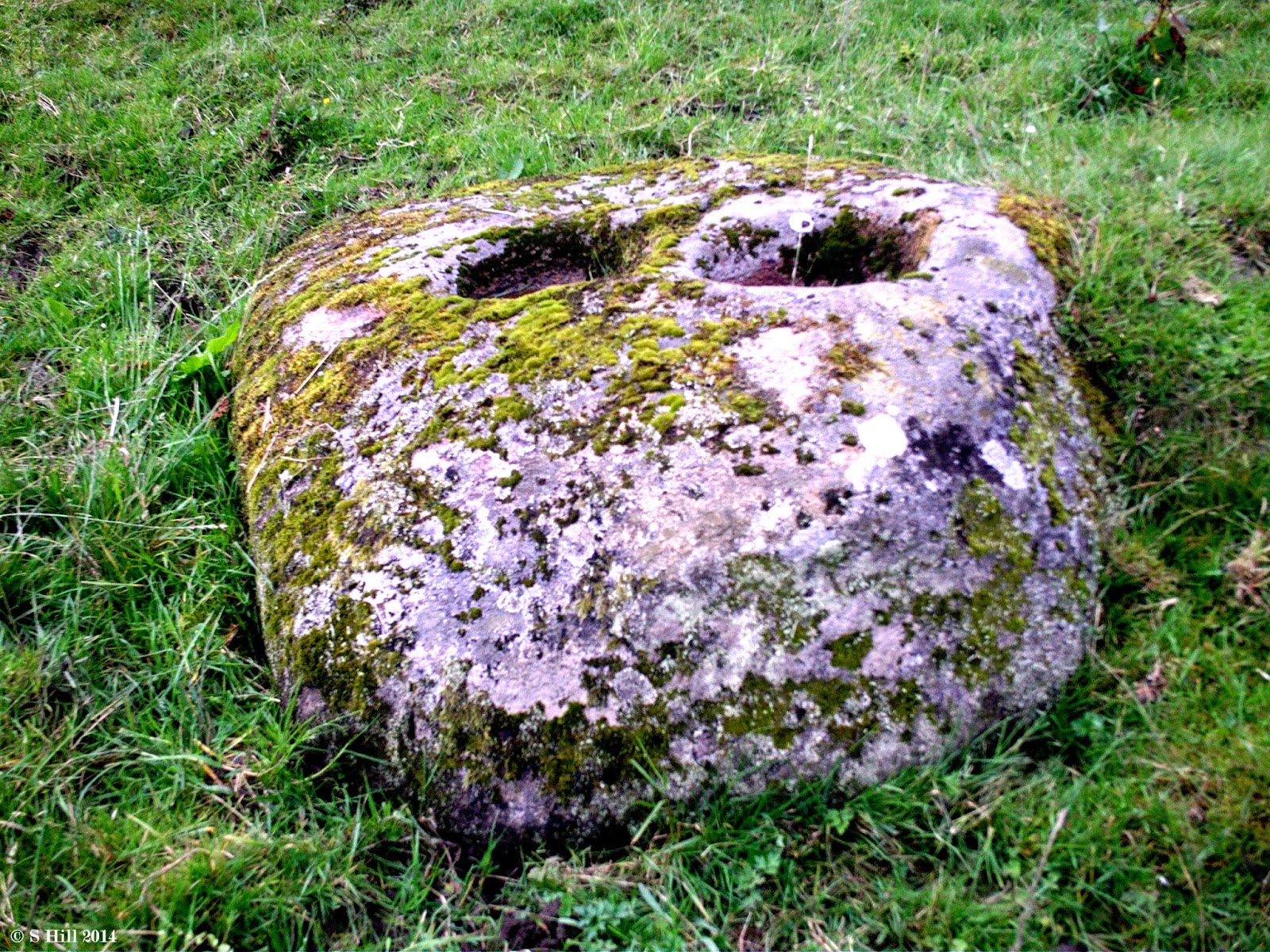 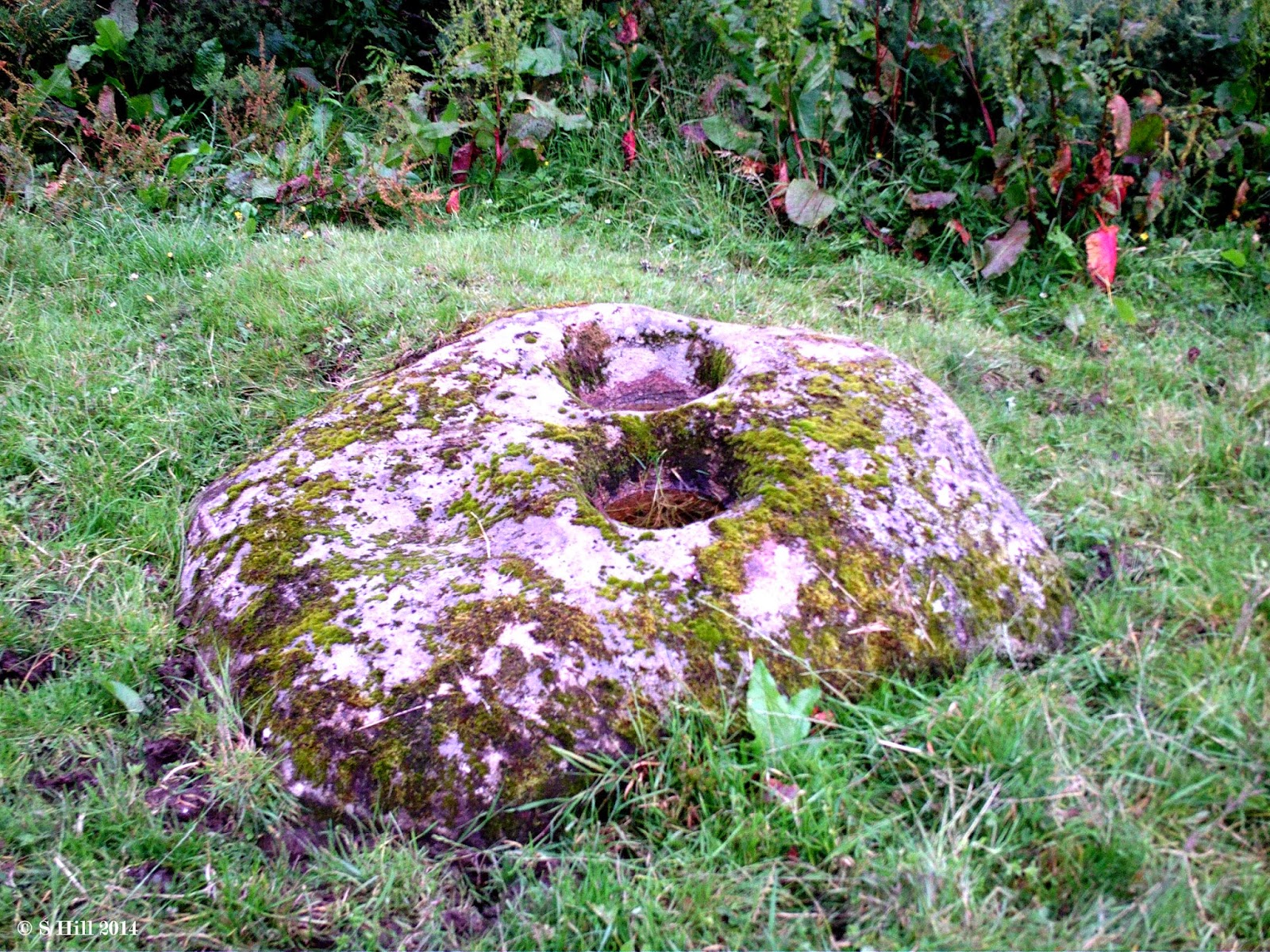 Above 2 Images: The bullaun outside the wall


This is a fairly recent ruin the last service being held here in 1968 and then abandoned due to diminishing patronage. In the mid 1980's the Church was stripped of it's roof and laid bare to the elements.
The Church is made up of two sections the original part was a simple nave and was depicted in a drawing by George Petrie in 1820. Around that time an expansion was made to the Church and a tall bell tower was added in the 1830's. It is believed that remnants of the medieval Church that stood here are included in the Prue-expansion section. The site although designated Church of Ireland contains many Roman Catholic graves. One notable grave in the Churchyard is that of former President of Ireland Erskine Childers.
While the ruin itself is aesthetically pleasing to the eye sitting on a hill adjacent to Scarr mountain and surrounded by bucolic countryside it is inaccessible unless you clamber in through one of the window apertures. But it is really fairly plain inside not full of nooks and crannies like the medieval Church ruins and so not worth the effort. The tower itself also remains locked. Interestingly enough there are a number of bullaun stones in the area and two of them lie close to the ruins and are worth seeing.
The first stone is situated within the graveyard down a set of stone steps near the West wall near the bell tower. It contains two "cups" one 6" in diameter and the other 14". The second stone is in a field just over the West wall. This contains three "cups" one measuring 12.5" another 11.5" and a third partially formed one at 7". These bullauns are fascinatng and are generally thought to be designed to capture rainwater for healing purposes. Some are also thought to be utilised to grind corn. A word of caution, if climbing over the wall to see the outer stone be wary of the capstones on the top of the wall as some are loose. I found this out the hard way when one of the larger ones came loose and dropped hard only millimetres from my foot!
Allin all a mixed bag then but a very attractively placed ruin with some interesting features. Worth a stop if in the area
To find the ruins take the M11 Dublin to Wexford motorway and at junction 15 take the exit for the L5067 heading West. At the junction with the R764 turn right and drive for approx.12Km until you come to a junction with the R755 signposted for Laragh. There will be a large Church in front of you at this junction. Turn left and drive for approx.1.5KM until, you see a left hand turn for the L5077 and a sign pointing to Derrylossary. You will find the ruins about 150m down this narrow road on the left.