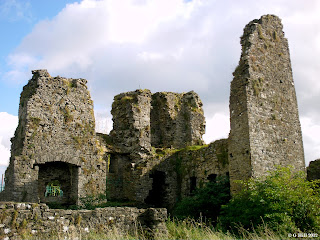 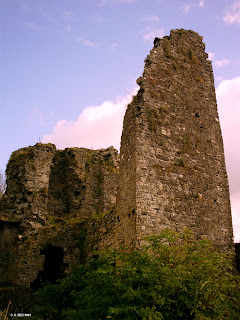 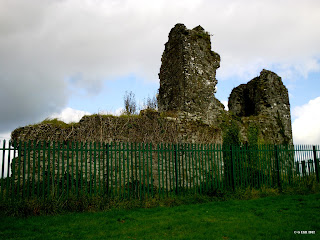 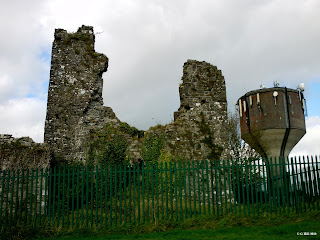 Above Image: The Castle's overseer, The water tower 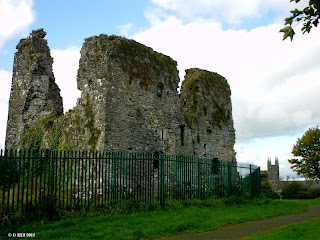 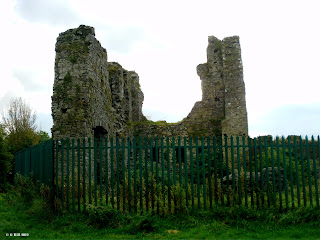 Blundell Castle ruins sit on a grassy hill in a small parkland area in the town of Edenderry. The Castle dates from the 15th Century when it was constructed  by the De Berminghams as a rectangular tower house consisting of three storeys. In the 16th Century it passed to the Cooley family whose name gave Edenderry it's former title, Coolestown. The Castle came under attack during the nine years war by the O'Neill clan and by 1659 it was under new ownership by George Blundell, whose family held the said ownership until the 18th Century. The Castle was attacked once again in 1691 by the forces of James II, it suffered badly and afterwards began it's descent into ruin. Today only the East and South walls remain standing exposing some of the innards.
The ruins are presently surrounded by modern housing but are isolated a little within a green area open to the public. These interesting remains are also overshadowed by a tall water tower which is jarring on first sight and with metal fencing now surrounding the ruins it almost looks as if the Castle is being held captive by a tall stark looking guard.
when we arrived there were no people in the park apart from a few hooded teens darting in and out of the trees. I was expecting our incursion on the ruins might draw some unwanted attention from them but fortunately they didn't seem to notice.
A short walk up from the road led us to the disappointing view of the Castle being fenced off, probably for safety reasons, but on closer inspection we found a bar in the fence had been removed by someone, probably not for a good reason, but in this instance I wont complain as it allowed us the opportunity to get access to a closer view. The walls of the Castle that remain jut awkwardly toward the sky giving the Castle a dramatic pose.
Looking at the remains of the interior there is evidence of two fireplaces, one on ground level in the East wall and the other in the South wall on the next level. There were no traces of any steps or stairs as they probably were attached to one of the missing walls.
walking around the rear of the ruins you can see three narrow windows still positioned in the South wall. The ground around the ruins within the fence is quite overgrown and full of nettles but is still quite easily navigated.
There is evidence of a tunnel not far from the ruins and local legend has it that it is part of a long conduit built supposedly between Blundell and another De Bermingham Castle, Carbury (see previous post here) If this is true then it must have been a massive undertaking as the distance between is almost five miles!
To find Blundell Castle, take the M4 Dublin to Galway motorway and exit at Enfield (junction 9).Turn left at the roundabout at the top of the exit ramp and then right at the next roundabout. Follow this road (R402) right to Edenderry. As you enter the town take the left hand turn onto Father Paul Murphy Street (just before the Corner House Pub) and then turn immediately up the road on your right. Drive a little way up this road and you will spot the water tower on your right hand side. Park along the roadside and you will see a small footpath leading into the park.
Posted by Castlehunter at 20:23