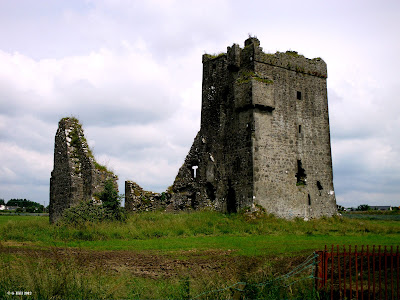 Above Image: You can step over the barbed wire left of the gate in
the foreground 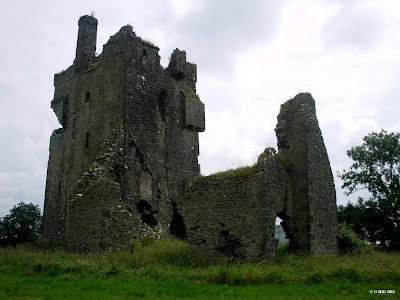 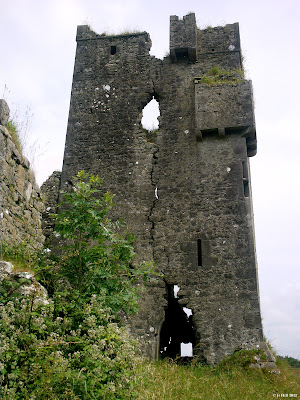 Above Image: The entrance with Bartizan and Machicolation above. 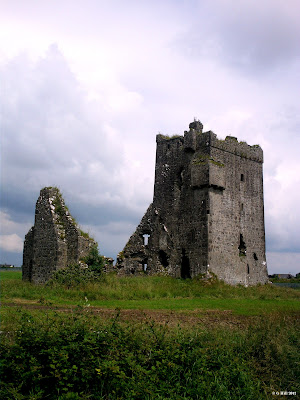 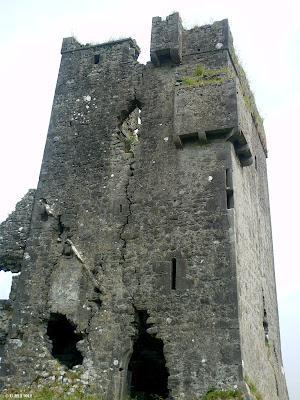 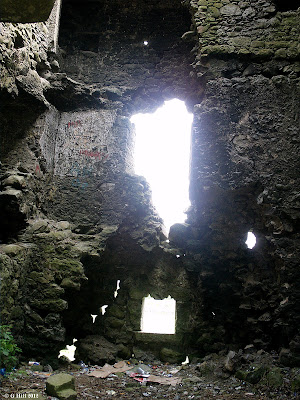 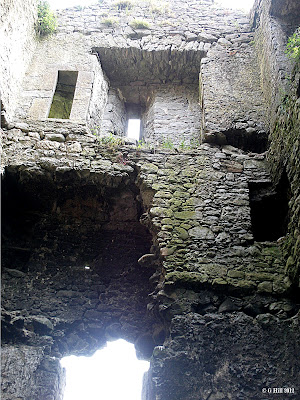 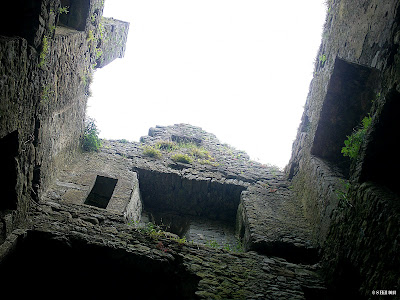 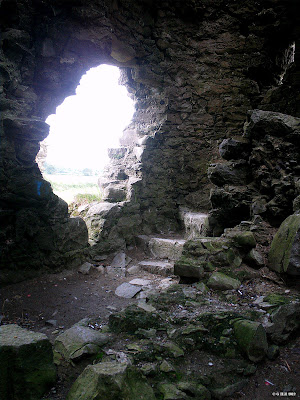 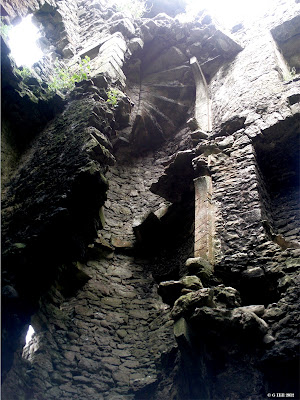 Above 2 Images: The remains of the spiral staircase 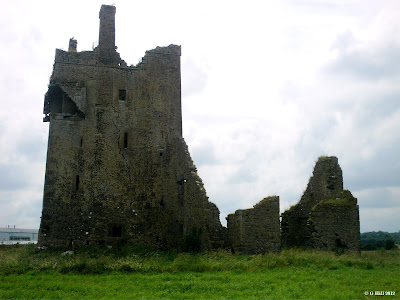 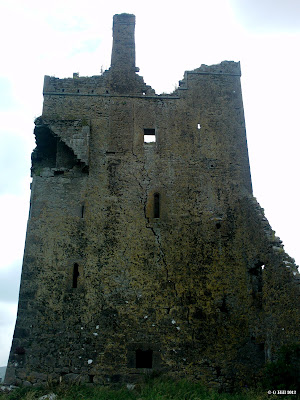 Srah Castle was constructed in 1588 by John Briscoe, an Elizabethan Officer from Cumberland. It was built as a four storey Tower House stretching 65 feet in height. The ruins of an adjoining 17th century residence stand on the North West corner of the Castle. Features of this heavily defencive Castle include gun loops, bartizans and a machicolation above the now ruined entrance door on the West wall. The machiolation was a projecting gallery with floor openings through which rocks and boiling liquids could be directed at attackers below. Though well designed with defence in mind the Castle still suffered extreme damage during the Cromwellian campaigns around 1650.
Today the Castle is approached by way of a former towpath of the late 18th century Grand Canal which stretches from Dublin all the way to the Shannon River in the West.
We have wanted to visit this ruin for quite a while and an opportunity this summer allowed us to do so.
Walking along the towpath at first there appears to be no sign of the Castle as it is cloaked by a large clump of trees at the field perimeter, but as soon as you reach them then the Castle comes into view looming above them.
The ruins stand in a slightly boggy meadow and you need to carefully step over a low barbed wire fence to gain entry. There is a sign stating "Reserved for Gun Club" but there is no prohibitive message so basically it is fair game. Later we would discover that entry was all too easy as on entering the ruins we were dismayed to find the ground littered with broken bottles and cans which is no doubt nothing to do with the gun club and more assuredly some local wastrels. This unfortunate circumstance may also be the reason that part of the spiral stairs has been removed to avoid any misadventures. The top part of the stairs can be seen above the third storey and it is a pity that you cant access what looks to be exposed doorways leading to mural corridors which would have been interesting to explore.
On the exterior North Eastern facing walls the bartizan is missing leaving a gaping maw in the Castle wall.
Large fissures are also evident on at least two walls stretching nearly the full height.
This is a Castle badly in need of some preservation. It is such a dramatic ruin and would certainly garner tourism especially with it's proximity to the canal and Tullamore Town.
To find Srah Castle take the M7 motorway from Dublin to Limerick and exit at Junction 17 onto the N80.
Follow this road through Mountmellick and Killeigh until you reach Tullamore. Take the route into the Town centre and turn left onto Patrick St. At the top of this street swing right and then left onto Kilbride Street.
Just over the bridge on the canal there is an immediate left turn onto Rahan Road. About 500 feet down this road you will see the towpath on your left. You can park here or back on Kilbride street (Disc Parking) if you wish. Walk along the towpath until you have passed under a road bridge and a rail bridge. The castle is on your right a short stroll later.
Posted by Castlehunter at 13:52