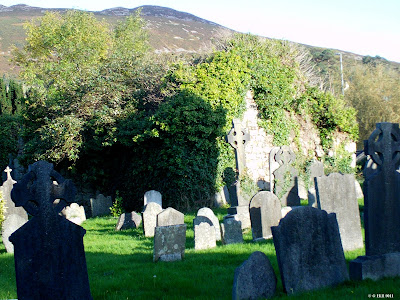 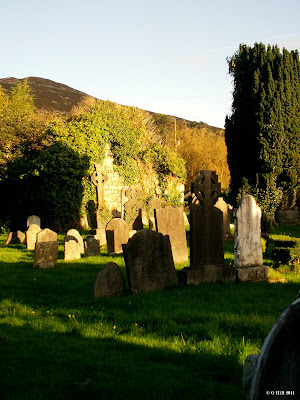 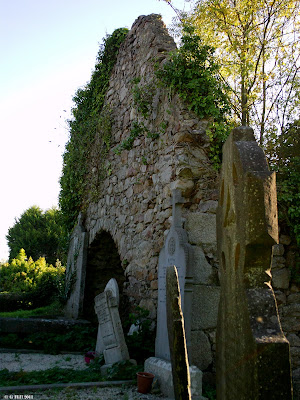 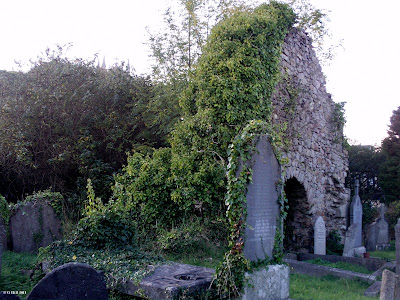 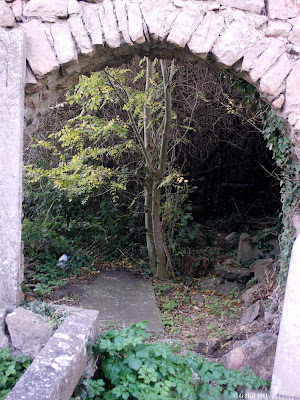 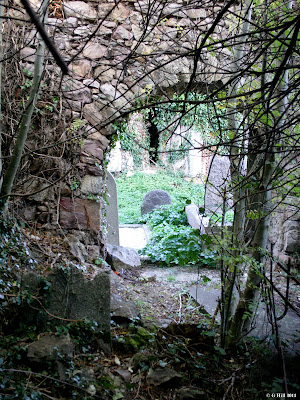 Above Image: A View from the inside 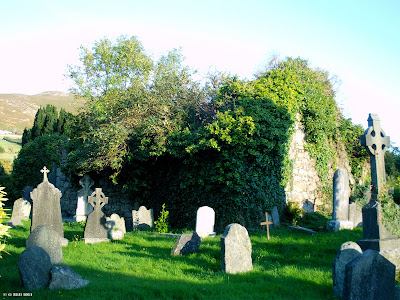 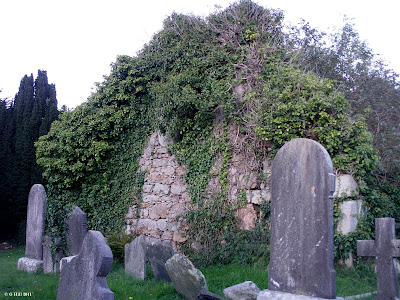 Derived from the old Irish name for the Church of Mochonoc, Kilmacanogue stands as a small Village near the picturesque Glen of the Downs. The old burial ground is situated on an ancient ecclesiastical site which dates back to the 6th century. While this has long passed into history there is still to be seen the ruin of a 12th century stone Church.The church had apparently remained in use up until the 1630's but is now ivy covered and only parts of the Nave, Chancel and both gable ends remain.
The burial ground contains both older and more modern gravestones and is surrounded by a wall. When we arrived we found the one access gate locked. A bit of quick thinking spurred us to inquire at the Post Office which lay adjacent to the grounds and here we were given a key to gain access. The postal staff said that now and again someone would come to try and trace family members on the old stones, but it was not the dead that intrigued us, but the slowly disappearing ruins that lie undisturbed.
The old Church is strewn with ivy but the gable ends are still much in evidence and it is possible with a bit of bush beating to get inside at least part of the structure. This ruin could so easily be cleared of its vegetation, but as in other places alike there doesn't seem to be the interest to do so and so, inevitably, pieces of history fade into thorny oblivion.
To find old Kilmacanogue Church, take the N11 from Dublin to Wexford and just before the Glen of the Downs you will see a slip road to exit to the Village on your left. Parking is limited in the Village but you will find a spot eventually. We parked in the nearby service station. To gain access, if locked, check with the nice folk in the local Post Office.

2018 UPDATE:
I passed by here recently and noticed that the Post Office is closed for business. I would advise checking with the local Church who might know the whereabouts of the key,
Posted by Castlehunter at 20:39