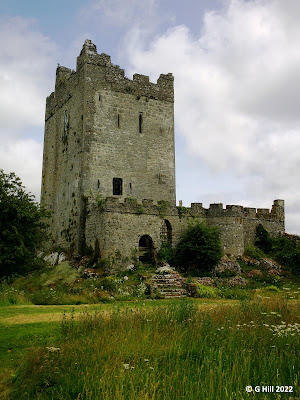 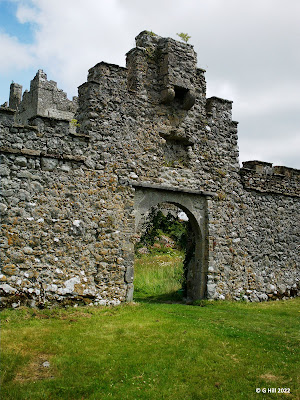 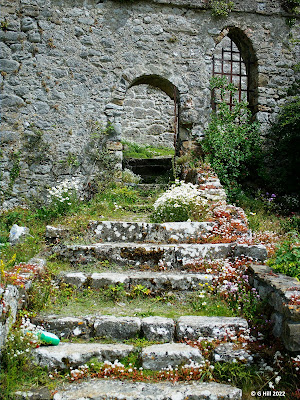 Above Image: Steps to courtyard gate 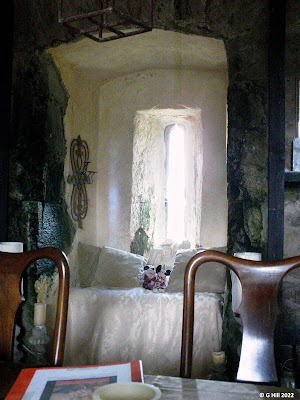 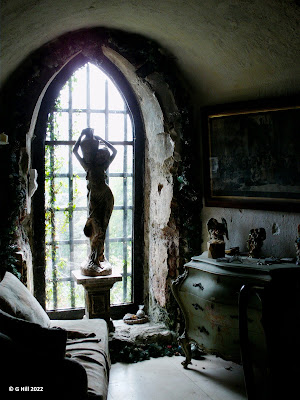 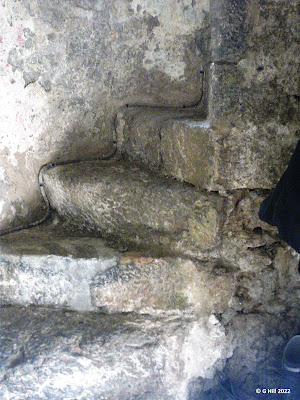 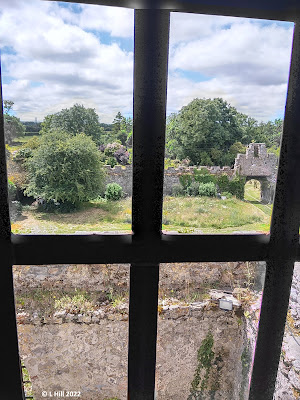 Above Image: View of bawn from first floor 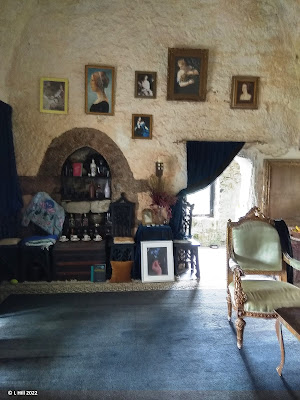 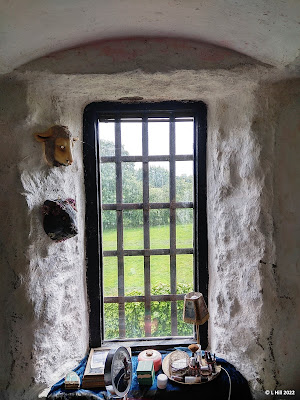 Above 2 Images: Interiors from upper floors 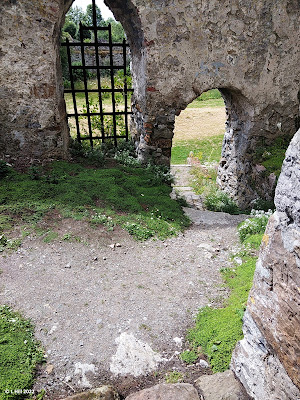 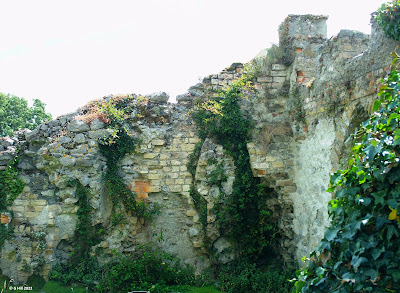 Above Image: Ruins of kitchen 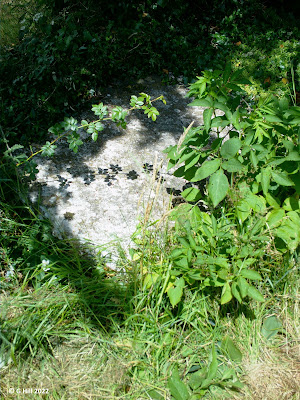 Above Image: Printed text of engravings on grave marker 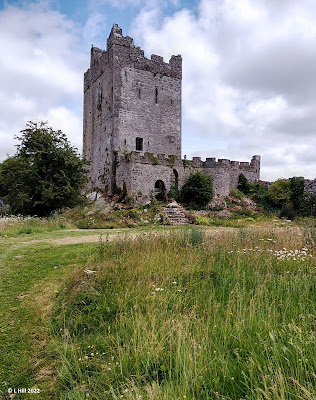 The sturdy and very striking castle of Colony towers over its surrounds and is probably the finest testament to the MacCoghlan's who constructed it during the 1490's. They also built nearby Coole castle which I visited recently (see earlier post here).

The castle stands three storeys in height and has partial remains of ancillary buildings attached. There are ruins of a kitchen and a chapel.

The history of the castle is particularly interesting because of its associations to the Boleyns of Tudor history. It was seized as an asset by Henry VIII in the early 16th century and was later given with its lands to the newly appointed Earl of Ormond, Thomas Boleyn It was a crafty move by Henry to gain Boleyn's daughter Anne as his bride, as she would now hold a position appropriate for a King to marry. Of course the best laid plans went awry later when Anne met the blade of the axeman. Following this event it was thought wise to relocate her cousins Elizabeth and Mary to the safety of Clonony castle in Ireland where they would eventually live out their lives. Elizabeth died quite young and it is said that Mary threw herself from the parapets in grief of her loss. In 1603 when land was being quarried near the castle, a cave was found and within it were the remains of two bodies with a stone slab declaring their place of burial. These were identified as those of the Boleyn girls. The bodies were supposedly later buried in the grounds of Gallen priory but the grave marker was placed under a hawthorn tree back in the grounds of the castle where it can be seen today.

During the reign of Elizabeth I the castle was owned by Matthew De Renzi who became something of a Gaelic scholar more so to keep ahead of the local Gaelic speaking MacCoghlans who resented him as an interloper and the fact he lived in a former MacCoghlan stronghold. De Renzi is attributed with compiling the first English - Irish dictionary.

Some conservation work was done on the castle in 2010 and restoration within has also been lovingly achieved by its current resident Rebecca Armstrong, a former ballerina from the United States. When we visited we had hoped to meet Rebecca but she was away from home that morning. We were however greeted by a friendly chap named Adam James who has been landscaping the garden and bawn area and was only too happy to show us around and tell us the history.

Once you enter through the impressive gate  from the roadside the castle comes into full view standing proudly on its rocky outcrop. A series of well worn steps lead up to the courtyard gate and the entrance to the tower. Within, on the ground floor, is a fine library with a large table and the walls depict the castle history through paintings and prints.

The upper floors are accessed by a narrow stone spiral stair bringing you to the living quarters where much of the restoration has taken place. The top floor and parapets are apparently haunted by a ghost in full armour. Is there not a castle in Offaly without its ghosts?

The courtyard area still remains ruinous and contains amongst others a former castle kitchen. There is also a very visible machicolation above the entrance door which is in the West wall.

All in all a very impressive structure and definitely worth visiting. The future of the castle being open for public visits will depend on the new owners as Rebecca has decided to move on (maybe to another project) so if you intend to visit use the contact details below to ask about access.

The castle is normally open during the summer months Friday - Sunday 12pm-5pm or otherwise by appointment. Contact +353877614034.

To find the castle take the junction 8 exit of the M6 and follow the signs for the N62 to Birr. Continue on the N62 through Ferbane until you reach Cloghan where you take a right turn onto the R357 toward Shannonbridge. Drive approx 3.5KM and you will see the castle bawn wall on your right. There is a small parking area just past the castle entrance gate. If the castle is open there is usually a sign hung up outside.