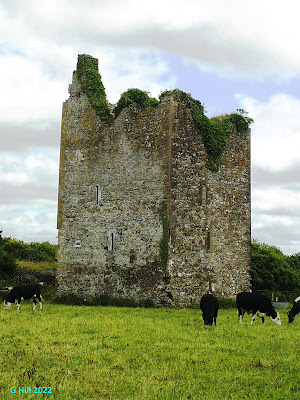 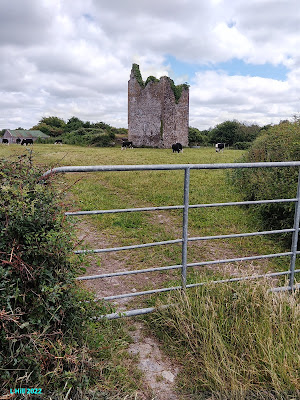 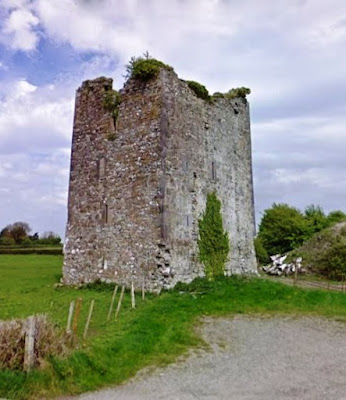 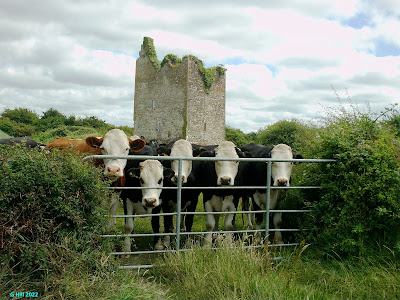 Above Image: The guardians of Coole Castle.

Having not been out in County Offaly for a while it was great to take in a bit of ruin hunting!

Just East of the village of Ferbane in the barony of Garrycastle and parish of Wheery on a country lane leading down to the Brosna River is the site of Coole Castle a 16th century stronghold built in 1575 as a gift to his second wife by Sir John MacCoghlan member of a very prominent family in this area.

The castle, a three storied tower house was completed, according to a engraved plaque inside, in 1575 after a couple of years of interrupted construction. An entrance door was placed on the East side while the South side had a commanding view of the river.

Sir John bequeathed the castle in his will to his wife Sabina O'Dallachain in 1590. It is thought to be one of the many castles destroyed or damaged badly by the English forces following the confederate wars and subsequent Cromwellian invasion. The family name however remained very influential both in the area and in the English parliament as far as 1790 and beyond.

There is only one real access route to the castle unless you have a row boat! A twisty country lane brings you literally down to a narrow bridge at the river and the castle is in a meadow near the road with a small rather beaten up metal pedestrian stile for access. Even though access to the interior is not possible and the upper floor has been damaged badly it is still a very commanding tower and worth a look. After all it is a listed building. The meadow is used for grazing cows and these ladies were very inquisitive but friendly following us around.

The castle has a legend, and we all love a legend, that there is an earthenware pot of gold hidden under a rock somewhere in the castle but it is protected by a spirit who will go to no ends to retain it. So if you find the gold be prepared to bring something else home with you!

To find the ruins take the junction 8 exit from the M6 motorway onto the N62 (first left off the exit roundabout). Drive straight on through the next roundabout following the N62 to Birr. Continue on the N62 until you reach Ferbane. Once on the Main Street take a left at the small crossroads in the village following the R436 to Kilbeggan. Drive approx 600m and turn at the first right hand turn onto the L30048. Follow this winding little road all the way to the bottom (passing Kilreahan cemetery) and you will see the ruins on your left. You can park just before the footbridge at the castle field gate.