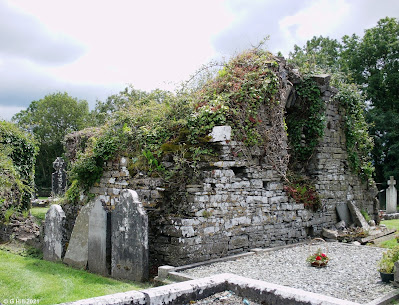 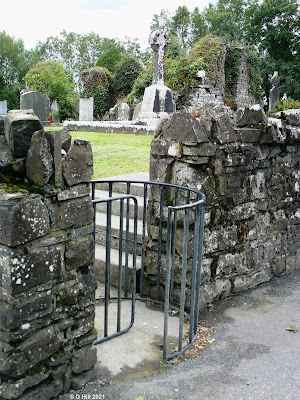 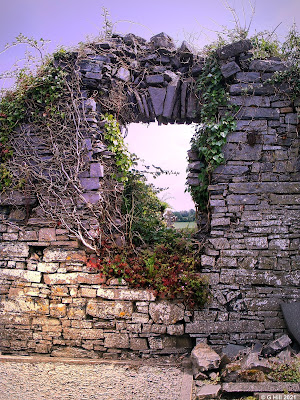 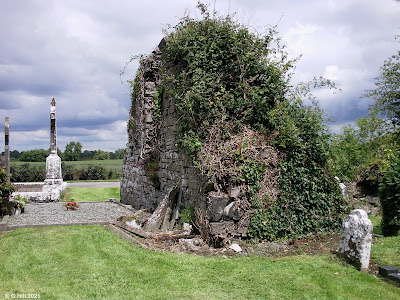 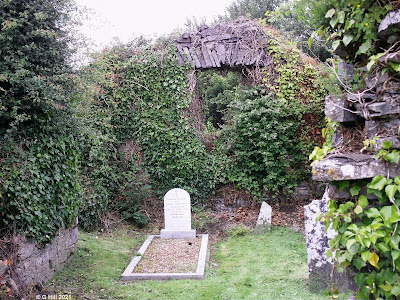 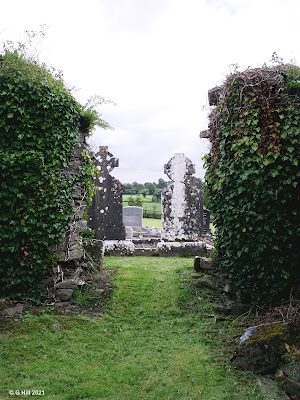 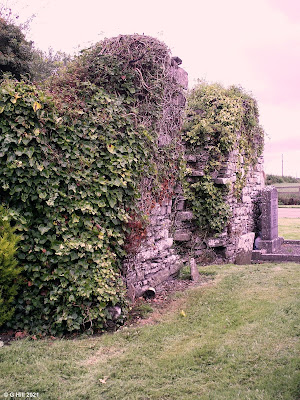 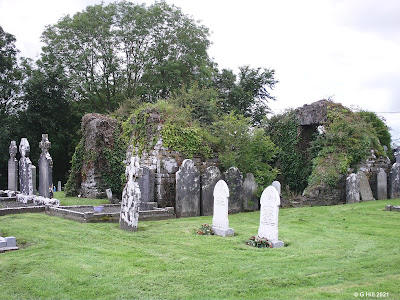 There is some ambiguity regarding the origins of this little ruin. Roadmain was part of the townland parish of Cussingstown or Cushenstown as it is known today. The graveyard is called Crossmacole derived from Crossmacool. While the church itself does not appear on church listings there are a number of records to give some backround to determining its age.
On a civil survey made in 1656 there is no mention of a church in Roadmain or indeed Cushenstown. On the 1837 ordnance survey map the structure is described simply as "church" and as "church in ruins" on the 1888 version. But it appears that the church was indeed ruinous back as far as 1836 as a civil survey made then mentions it as so. That leaves the possible origin date as being after 1656 and before 1836. Strangely, this building does have a more medieval look about it so there is one more possibility and that is that this structure being comprised of a single cell was not a church but a chapel of ease. This chapel would have been a small local place of prayer for a community to which a church might be too far a distance to travel. If this was so, it may not have been included on church lists and it could in fact have existed long before 1656. The nearest churches to Roadmain would be the ruins at Piercetown, Kilmoon, Rathfeigh and Ardcath. You can check my previous visits to Rathfeigh (here) and Ardcath (here)..
The  Roadmain ruins lie in an old graveyard in which the original borders are basically defined by the older stones some of which I believe stretch back to the 1780's.The graveyard has been extended beyond these perimeters over many years. Access is easy by way of a pedestrian swing gate and the ruins are close by inside. The structure is unfortunately in a bad state of affairs. Ivy has encroached upon it and sections of it have collapsed especially around the North and South walls. The doorway appears to be in the South wall and there is a large window opening in the West wall. The East wall has a large gap which starts at ground level splitting the gable in two but it may originally have contained another window. The small interior floor is grass covered and contains a couple of gravestones. I've been inside some small church ruins before but this is certainly very small indeed. I can't imagine very many people fitting inside here so the idea of a chapel of ease at least in my mind begins to fit the bill. The ruins are basically featureless today but the interest lies in the origins of this little ruin and what function it served in the community back in its day.
To find the ruin take the N2 heading North from Ashbourne towards Slane. Drive for approx 6KM until you reach a right hand turn at Kilmoon Cross signposted for the R152 to Drogheda. Turn right onto this road and drive until you spot a small pub in Cushenstown on your right with the name P. Dowling. The graveyard is approx 250m past the pub on the right hand side. You can park at the roadside gate.
Posted by Castlehunter at 17:20