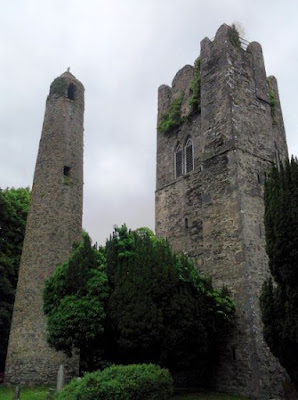 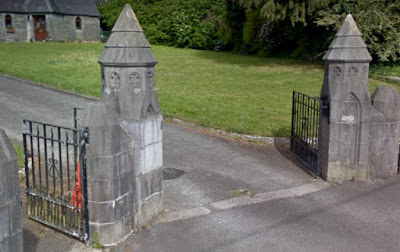 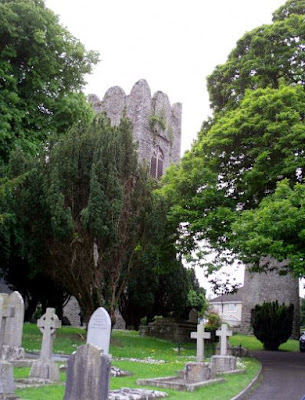 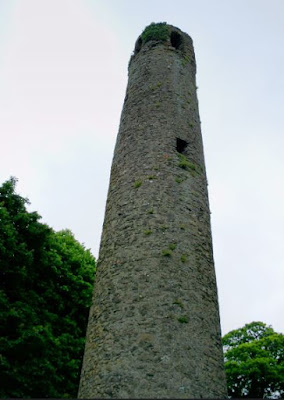 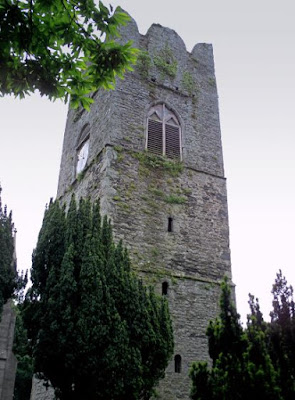 Above Image: The 14th century church tower
These ancient towers stand close to each other in the grounds of St. Columba's Anglican church in Swords, Co. Dublin. The present church is more recent having been built in the early 1800's.
A monastery was founded here in 560AD by St. Colmcille and it thrived initially but fell victim to many attacks over the centuries either by raiding Irish clans or subsequently by the Vikings. Nothing is extant here today of that monastery apart from the 9th or possibly 10th century round tower which would have been constructed as a refuge and safekeeping place against marauders. It stands over 80 feet high and about 16 feet in diameter. The original doorway is now almost at ground level but would have been a few metres higher when it was constructed.The last few metres at the top just below the cone were reconstructed at a much later time and a cross was placed on top.
The square tower standing beside the round tower is the belfry tower from the 14th century church that once stood here. The church nave and chancel fell into ruin long ago most likely after the suppression of the mid 16th century and the remains were still visible until the building of the new church took place in the early 19th century. They were subsequently demolished leaving only the bell tower. A clock was also later added to the East face of the belfry.
Both towers today stand imposingly side by side among the trees and they are somewhat awkward to get a good photograph of together in the one shot, especially when the sun is higher causing them to  silhouette against the sky. But a little time and patience wins out in the end.
Access to the grounds is simple enough with a pedestrian gate to the left of the main entrance gates that is unlocked whether the main gates are locked or not. Unfortunately the interiors to the towers at the moment remain closed.
To find the towers take the junction 3 exit off the M1 motorway and at the top of the exit ramp take the first exit left onto the R125 signposted for Swords. Continue along this road going straight through the next two roundabouts and again on the third joining the R836 for Swords. Continue into the town until you see the Lord Mayor pub on your left. Take the next left turn onto Church Road and follow it up until you see the Anglican church grounds on your left hand side. Parking on this road is reserved but if you follow the narrow road down to its end you will find parking there.
©  G Hill 2021
Posted by Castlehunter at 17:03