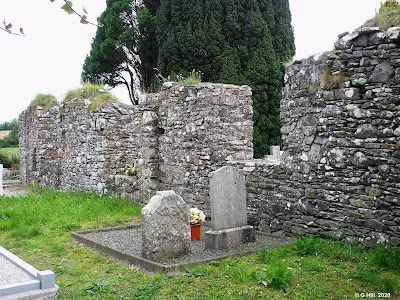 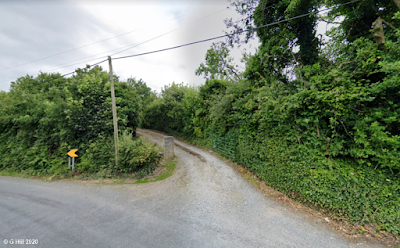 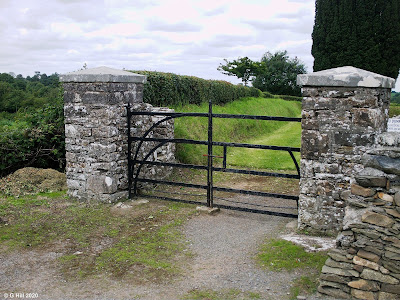 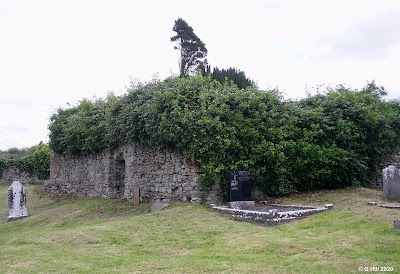 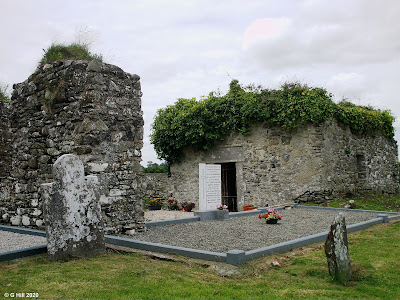 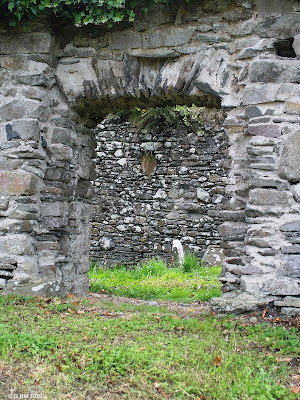 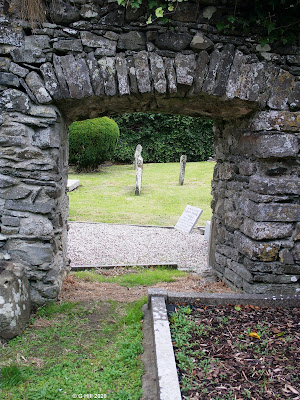 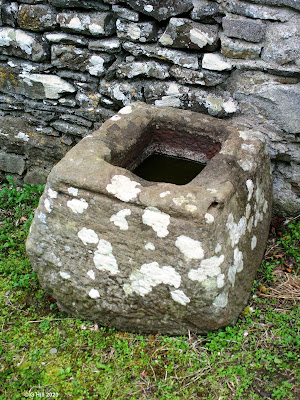 Above Image: Cross base within church 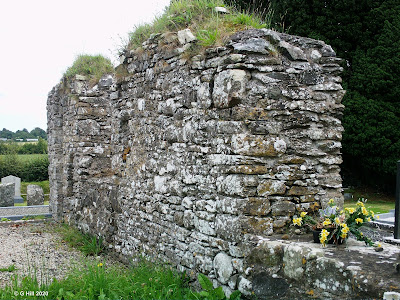 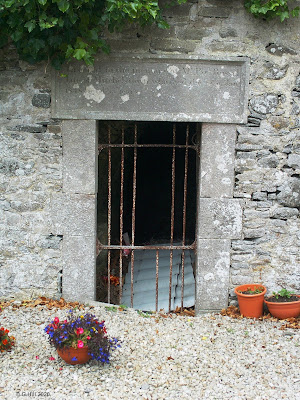 Above Image: Gate of mausoleum 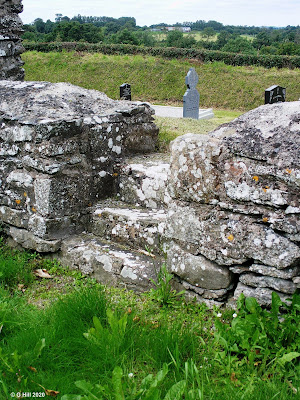 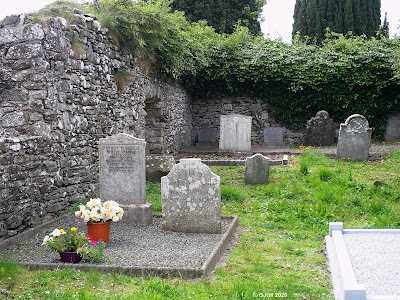 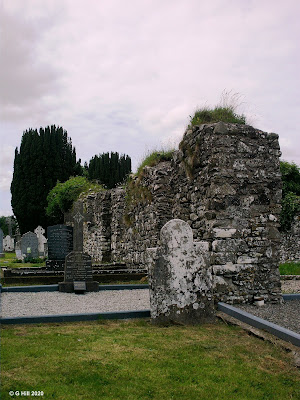 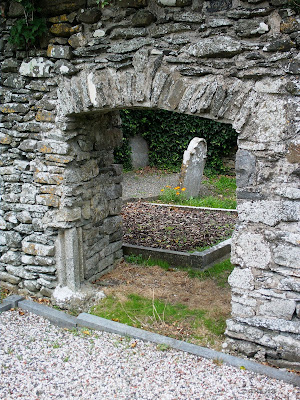 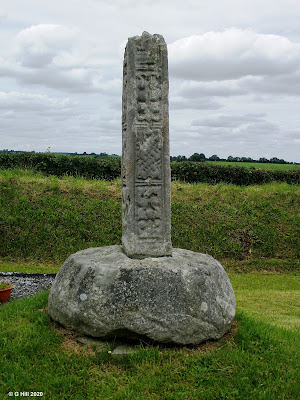 Above Image: High cross shaft & base 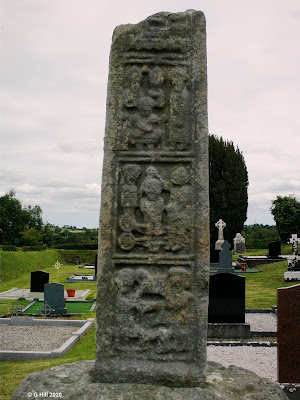 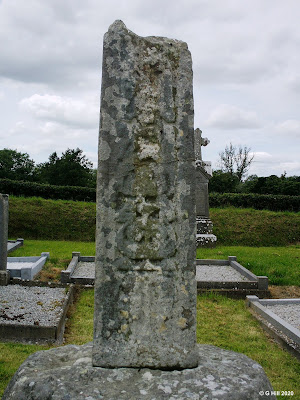 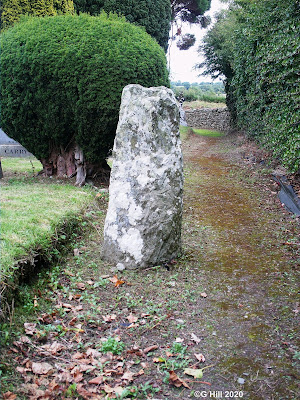 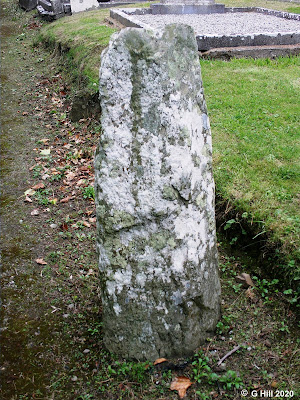 Above Image: Damage marks on face of stone 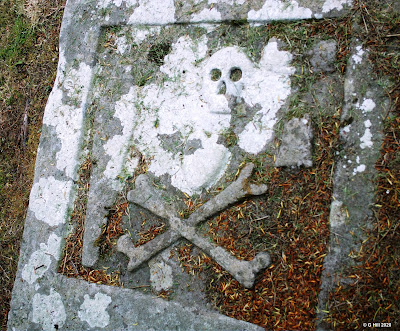 Above Image: Skull & crossbones grave slab
This medieval church dates back prior to the 14th century as it was mentioned in the ecclesiastical taxation report for Pope Nicholas IV made during the period 1302-1306.
It was a functioning parish church at least up to the dissolution and was dedicated to St Ivarii. The church was in ruins by the time of the Irish confederate war in the 1640's
We have come across quite a few church ruins in County Meath during our summer expeditions between the Covid lockdowns this year. Quite a number are on back roads or in this case secreted away from the road up a narrow laneway. We chose to visit this one in particular because the grounds also contained a few interesting features.
Firstly. the church ruins which are positioned in the centre of an walled enclosure, consist of a divided nave and chancel with a great deal of the walls still extant apart from the East wall which is now at foundation level. Two doorways stand opposite each other in the North and South walls with the remains of the base of a high cross just inside the Southern doorway. The absence of a church roof ensures this base is always full of water in the aperture at the top where the shaft was formerly inserted giving it the look of either a font of a large bullaun stone.
A little set of three stone steps lead up through the North wall which may have been another doorway to the exterior or a now non-extant extension. A mausoleum with a lintelled doorway and a dedication from 1818 to one Patrick Russell is located within the North was on the East end of the ruins.
Within the grounds just to the North West of the church are the remains of a high cross. What is present is the base and shaft. There are some interesting depictions from the Old Testament carved on the East face namely from bottom to top Adam & Eve, Noah's Ark ,The sacrificing of Isaac and Daniel in the Lion's den. The West face depicts scenes from the New Testament which are The annunciation to the Shepherds, Jesus's baptism, Adoration of the Magi and the Marriage at Cana.
Elsewhere in the grounds you can find a curious grave slab located just South of the church walls possibly two to three centuries old which has carved upon it a skull and crossbones with a heart in the centre and also just about visible beneath the bird droppings an hour glass and a bell. I have come across similar stones such as these around the country and they apparently are supposed to depict mortality and a reminder to those viewing that they too will one day succumb to inevitable demise.
One last item we came across was a standing stone located on the perimeter path to the South of the ruins. It is leaning at a slight angle and stands approx one metre in height. The surface on its West face appears to have been damaged by some implement or other as someone tried unsuccessfully to forcibly remove it.
The ruins and indeed the graveyard lie silent and we were not disturbed during our visit as we have been on occasion in the past when visiting out of the way sites, usually by well-meaning locals who are just curious as to what you are up to.
To find the ruins take the N52 heading North East from Kells towards Ardee.and drive for aprox 22KM then take a right turn onto the L1604 signposted for Lobinstown. Continue for approx 2.2KM and look for a narrow laneway on your left with a single stone pillar and open metal gate. it can be easily missed on this narrow winding road so drive slowly and you should spot it eventually. There is a photo of the lane entrance above for reference. Drive up the lane and you can park outside the graveyard at the top,
Posted by Castlehunter at 15:36