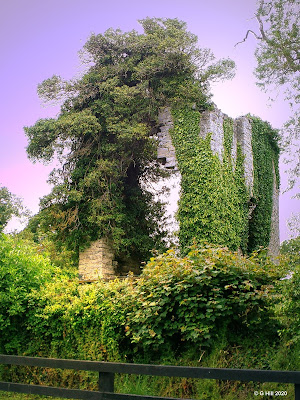 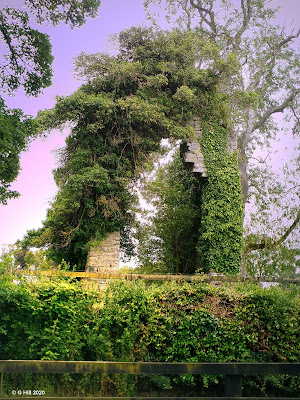 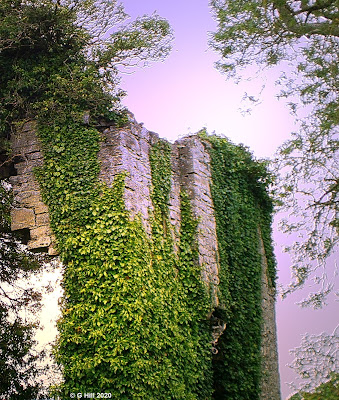 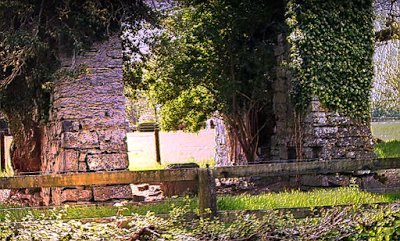 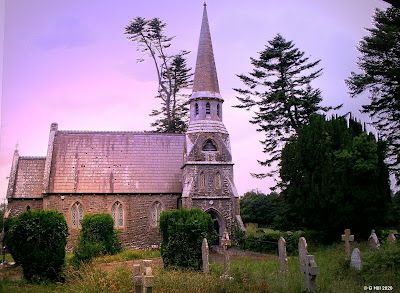 
Moyglare Road meanders Northwards out of Maynooth. Along its route, virtually unnoticeable unless you are actually looking for it, lies the remains of Moyglare Castle. The history regarding the origin of this castle appears to be lost in the swirling sands of time.
The Castle, bearing in mind its size and location, has all the attributes of the result of the statute decreed by Henry VI in 1429 stating that in order to protect the pale from marauding Irish clans a sum of £10 would be paid to any supporter of the crown who would build a fortified tower of specific dimensions on or along the borders of the pale. That's an equivalent of £6,250 by today's standards. Taking into consideration that today the remains of Moyglare only ascend to the first floor above the entrance, its dimensions otherwise fit the bill of the King's suggested castle specifications and also  the fact that its location is near Kilcock (which was on the border of the pale) increases the possibility further.
As to its fate and eventual ruination, the only other piece of information I could garner from research is that the land was owned in 1640 by one George Wentworth. This was just before the time of the  English civil war. George Wentworth went on to fight in that war on the side of the Royalists, He was the brother of Thomas Wentworth, 1st Earl of Stafford who was himself a Royalist and also Lord Deputy of Ireland from 1632 to 1640. It would then be of no surprise if Cromwell's forces on moving towards Drogheda in 1649 and taking into account Moyglare's Royalist owner would most probably have left Moyglare castle destroyed in their wake. The gaping hole on the South-Eastern wall looks to all intents and purposes like the result of cannon fire.
The remnants of the castle today are slowly being engulfed by ivy and encroaching trees. The walls though crumbling away at the top appear defensively thicker at their bases. Within the scant walls of the first floor there are the remains of a fireplace.
We would like to have gotten closer to the ruins but they appear to stand now on private land belonging to Moyglare Stud Farm one of many horse breeding farms in the area. As a result of this, especially in Summer and the proximity of the farms, there is an abundance of flies ready to lay siege upon the unsuspecting visitor who dares to exit their cars or stand still in any one spot too long.
A short distance from the castle is the church of St. Paul, which has a nicely designed tower and spire which was built in 1870. The church sits upon the site of an ancient medieval church built prior to 1300 which remained partially in ruin since the 1640's but was eventually demolished to make way for the new church. No traces remain of the medieval structure and the new church itself is now privately owned. Behind Moyglare Stud Farm there also lies oddly enough an airstrip (just in case you are travelling in by Cessna!).
To find the ruins take the junction 7 exit for Maynooth from the M4 onto the R406, When you reach the traffic lights at the T-junction with the R148 in Maynooth turn left and then take the first turn right and drive for approx 2.8KM along Moyglare Road. Keep an eye out on your left for a green sign welcoming you to County Meath and then about 200m on take the next left turn.(there are the remains of a wall based postbox on the corner). 200m along there is a fork in the road. On the left fork is Moyglare church while about 70m down the right hand fork is the castle. It is situated behind a fence and hedgerow. Its a quiet enough road and we parked at the edge with no problem.Watch out though for those pesky horseflies!
Posted by Castlehunter at 20:57