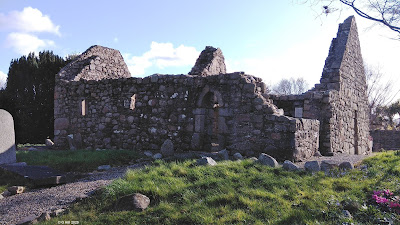 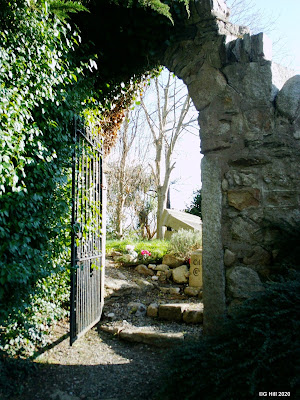 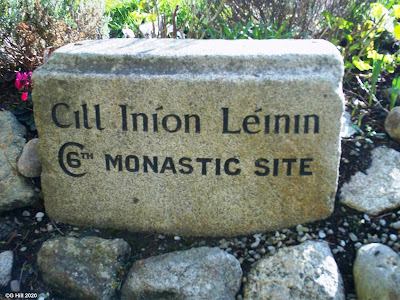 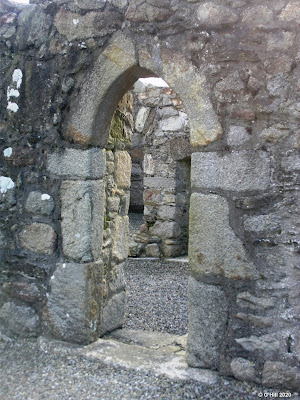 Above Image: The North facing doorway 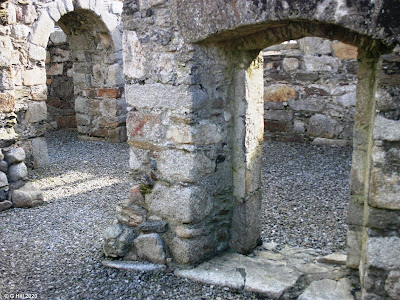 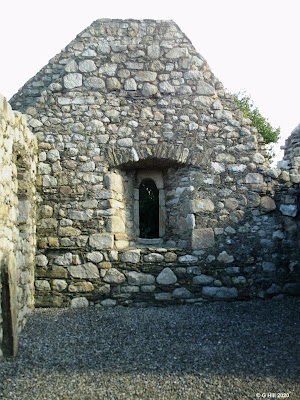 Above Image: Interior of East gable 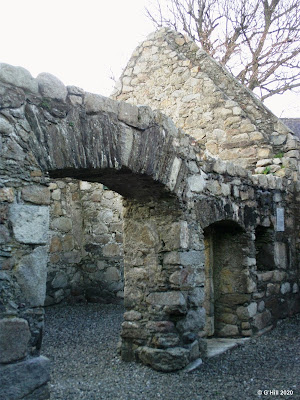 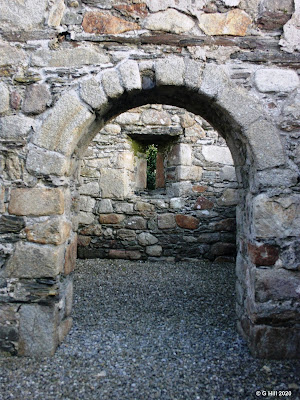 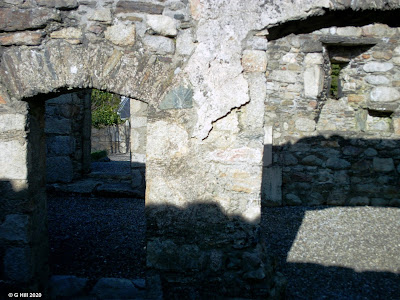 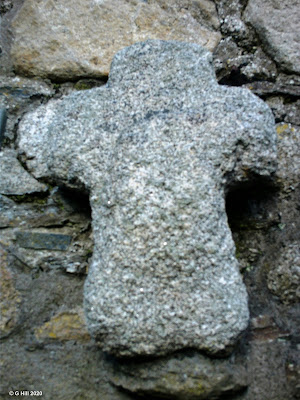 Above Image: A worn ancient cross 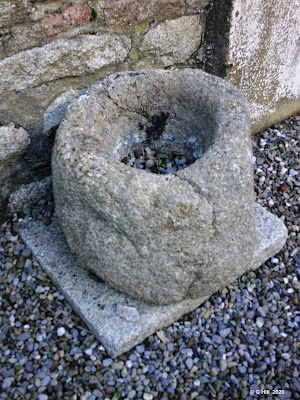 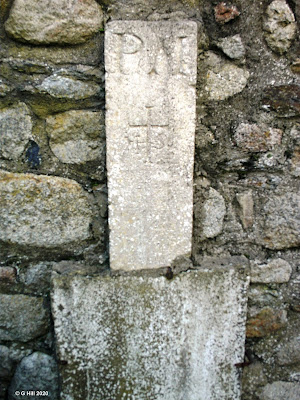 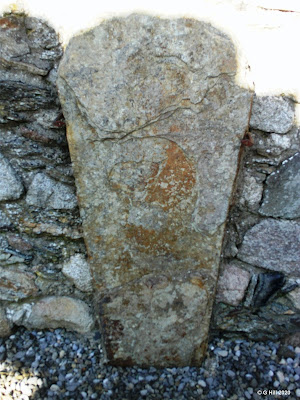 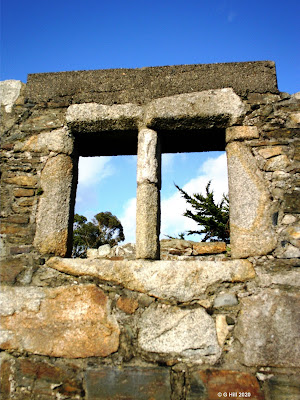 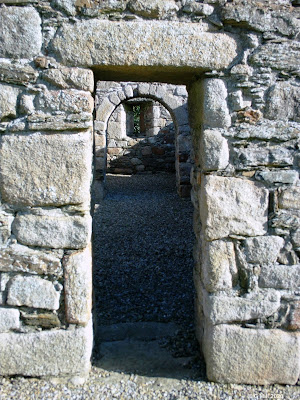 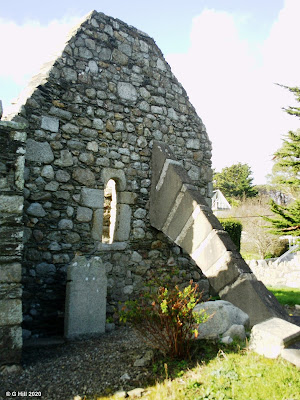 Above Image: Buttress on East gable 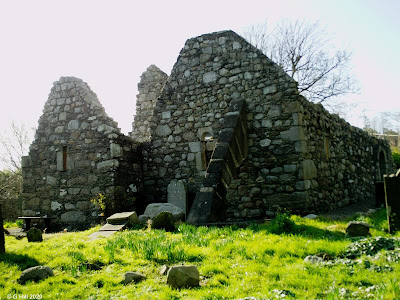 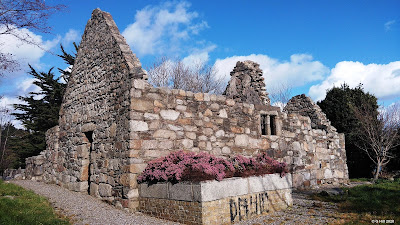 This old parish church ruin is really two churches in one and is one of the most interesting examples of its kind. It is situated in an elevated area within a stone walled graveyard nestled among some private houses in Marino Avenue West.
The church is called Killiney which is derived from the Gaelic "Cill Inion Leinin" which translated is "Church of the daughters of Lenin" (and no, not Vladimir Lenin!). Lenin was the son of Garrchon and his daughters were all saintly ladies who it is thought lived in this area as there has been an ecclesiastical presence here since the 6th century. One of his daughters Bridget (aka Brighit or Briga) was also associated with Tully Church in Loughlinstown (see earlier post here).
As mentioned the church is made up of two sections. The original Section on the South was constructed in the 11th century while the Northern part was added in the 16th century before the dissolution of which it fell victim to in 1541. The lands and church were passed over to the Church of Ireland deanery at Christchurch in Dublin and was manned by clergy from nearby Dalkey. To what extent its usage was is unsure but it is recorded as being in ruin and ivy covered by Samuel Lewis in his 1840 publication "A Topographical Dictionary of Ireland" The earliest gravestone found here dates from 1791.
We attempted to visit these ruins in the past but to no avail as the gate was always locked. It was not possible to get a good view from outside but it was surprising when we eventually got inside to see how large it was. Information on how to access the ruins came purely by chance as a reader of this blog put me wise. The key was located behind the counter of the "Cafe de la Gare" at the DART railway station in Killiney. A very helpful lady gave us the key on the promise of bringing it back.
Opening the locked gate felt like entering Hodgson Burnett's secret garden and we were full of anticipation. I have to say we weren't disappointed in the least and particular mention must be made to the grounds inside which are very well maintained.
We entered the Church itself by the Southern doorway which I believe is called the "Choir Arch". Once in here we discovered as mentioned how much larger the interior was than what we expected. Both sections are in remarkably good shape and all walls with small exceptions remain upright and  roofless, although the older part is missing the top half of its West gable. The horrible ivy described by Samuel Lewis in his gazeteer is no longer traceable making the interior open to full inspection. The two sections are divided by the original North wall of the church in which several arched openings were made to provide access to the newer section which seems to have been utilized as an aisle of some sort.
On the West side is a solid lintelled doorway which unusually has (and could be so easily overlooked) a "Greek" styled cross carved on its underside, Also within the older part of the ruins you will find a number of interesting artefacts, There is a plain and very weather worn cross, an old font belonging to the church and a couple of interesting grave slabs.
Altogether this was a really enjoyable visit although re-locking the gate took a little time as the lock had a short shackle and frustratingly needed to be positioned in a particular way to close properly. On returning the key we refreshed ourselves after the lock ordeal with a nice coffee break in the cafe!
To find the ruins, take the M50 motorway Southbound and exit at junction 16 onto the R118. Drive for approx 1.3KM and you will cross a bridge over the N11. About 500m further take the second right hand turn onto Wyattville Road. Follow this road through a small roundabout and a crossroads with Church Road (you will see a stone obelisk monument on the right) Drive straight on through the junction onto Military Road and approx 220m later you will reach a staggered crossroads with the R119 (Killiney Hill Road). From here you can find the ruins by turning left and 150m further take a turn onto the narrow Marino Avenue West. The Gate to the ruins are tucked away on your right between two houses about 260m up the lane. You can park at the gate but be careful not to block any other gates. You will of course need a key. So before you take the left hand turn off Military Road to visit the ruins, continue on straight through the crossroads with Killiney Hill Road to the next junction (very narrow so watch for oncoming vehicles) then turn left onto Strand Road. The DART railway station is on your right about 200m along. There are plenty of disc parking spaces around if you need them. The key is available at the station cafe (Cafe De La Gare). Don't forget to lock the graveyard gate when done and return the key.
Posted by Castlehunter at 16:34