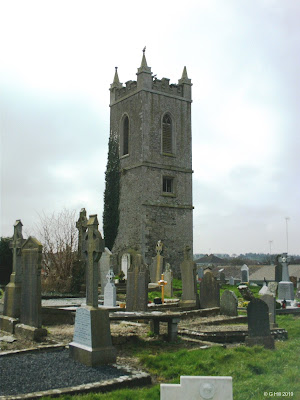 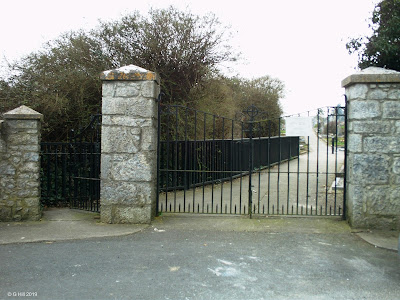 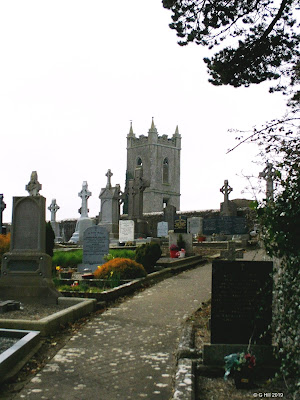 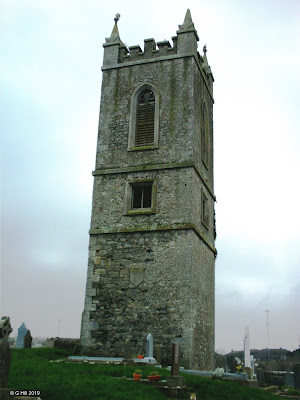 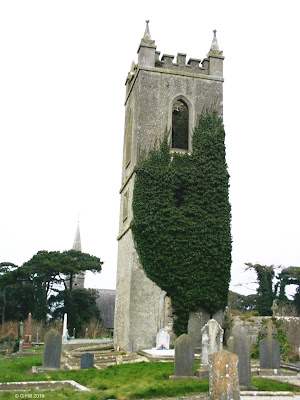 Above Image: Southern aspect with spire of
new church behind trees 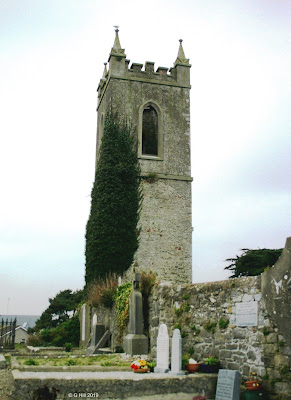 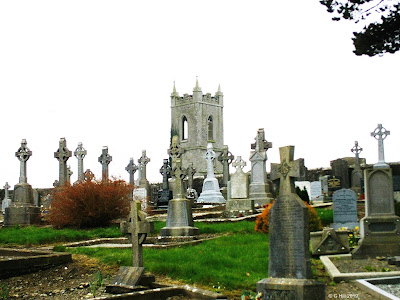 Situated on elevated ground within a cemetery in Skerries this tower is all that remains of the old parish church belonging to the Church of Ireland. The church dedicated to St. Patrick was constructed in 1722 at the behest of the new owners of the Holmpatrick estate who had acquired the lands from the Earls of Thomond in 1720. It remained in service until the early 1860's when it was torn down to make way for the new church which was completed in 1865 on lands adjacent. It was decided to leave the old tower untouched as it's position made it a clear landmark for shipping in the nearby Irish Sea making it a form of inland lighthouse if you like. It stands as a solitary sentinel over the gravestones.
The tower comprised of three levels and has crenellations on top. I'm not sure if there was originally a spire but if there was it was removed. Perhaps someone reading can attest to this. Attached to the base of the Southern wall of the tower are the only known remnants of the medieval priory that preceded this church. They are known locally as the Abbot's Headstone and the Delahide Stone. Surrounding the tower given it's location are a number of stones marking those involved in maritime fatalities.
To find the ruin take the M1 Northward and exit at junction 4 crossing over the motorway and following the signs for the R132 to Balbriggan. Drive as far as Blake's Cross and then take the right hand turn at Ace Express Freight for the R127 to Skerries. Continue on the R127 by-passing Lusk until you have went through the small railway bridge tunnel just outside Skerries. Beyond this is a small roundabout at which you turn right onto Miller's Lane. Drive for approx 500m until you reach a small crossroads with Miller's Lane/Golf Links Rd. Turn left here and drive for approx 400m until you see the new church on your right hand side. The entrance gate to the cemetery is just past this and there is room to park outside.
Posted by Castlehunter at 17:53