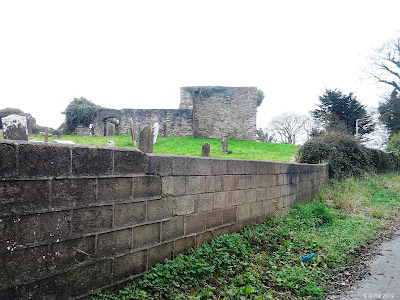 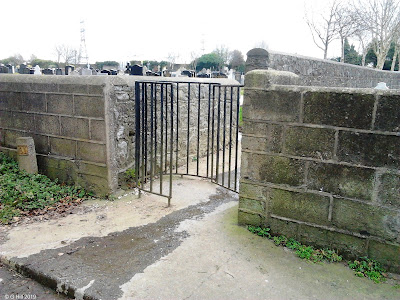 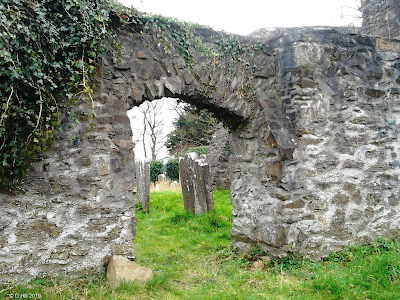 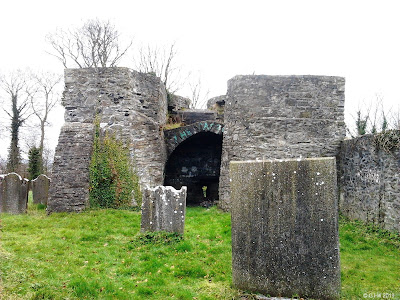 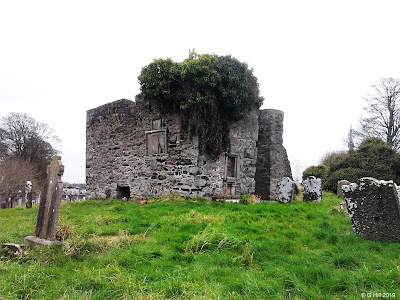 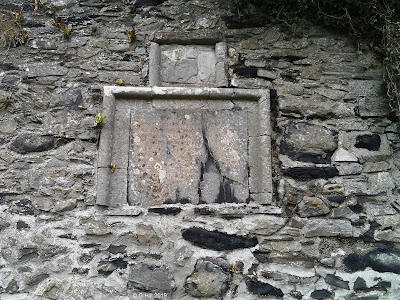 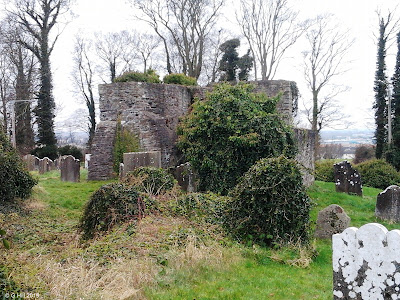 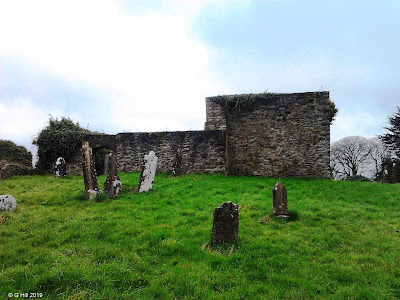 This forlorn little ruin is all that remains of the medieval parish church of Mulhuddart. More precisely the land is called Buzzardstown named after William Bossard, one of the Norman settlers. The church dates back to the fourteenth century with the tower being an addition possibly about a century later. The addition of the tower blocked the original entrance and so a new doorway was created in the North wall.
The church stands on a hill which once afforded fine views of the rural countryside but it now finds itself dwarfed by urbanisation. The church is dedicated to the virgin Mary as it is in close proximity to an important holy well which is now housed in a small chapel shaped structure on the roadside opposite the church. This well also gave a name to the local area of Ladyswell,
The church remained in use until the early 1600's although since the reformation mass could no longer be said there and so it was passed to the protestant community. A royal visit in 1615 had stated the the church was in good repair but with such a low protestant community to support it, the church finally fell in ruin as attested by Archbishop Bulkeley in 1630. It has remained a ruin since then.
I visited this site one day during a lunch break from work as it was close by. While not being awestruck by it, I did find the nature of the structure interesting, especially the vaulted lower room of the remains of the tower. A local tale tells of a company of men belonging to Col. Foulkes took refuge from a storm in the ruins in 1690 during the Williamite wars only to find themselves discovered by the Jacobites and killed outright. I felt that especially in the vaulted area there was still a tinge of something in the air that didn't seem quite right. I wasn't aware of the killings until later when researching the site but it still sticks with me that death had left a stain of some sort there.
What remains today are parts of the nave and chancel but most of the tower which would have been quite sturdy is non-extant. A modern graveyard has emerged beside the church which began around 1891. The old graveyard surrounding the ruins contains some very old stones. Access is easy by way of a swing gate at the roadside and the ruins are worth a visit if you happen to be in the area.
To find the ruins do as follows. From the junction with Snugborough Road at the North end of Blanchardstown village drive straight on towards the Shopping centre. When you reach  the roundabout take the third exit and continue up this road until you reach a major junction with Blanchardstown Rd North. Continue straight across this junction and drive for approx 600m until you reach a right hand turn for Church Road with Circle K service station on your left. Turn right onto Church road and go straight ahead on the next roundabout. Approx 700m on after the roundabout you will see the graveyard on your right hand side. You can park alongside the graveyard wall
Posted by Castlehunter at 17:42