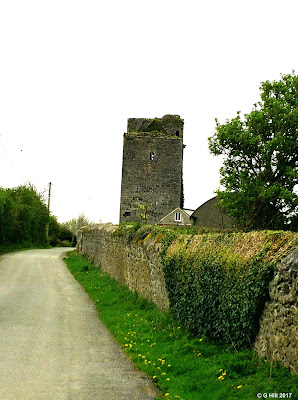 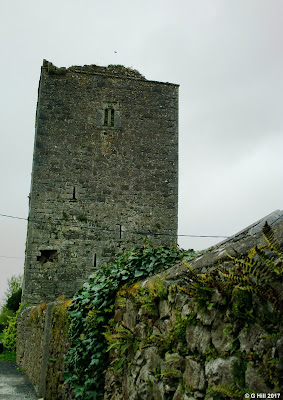 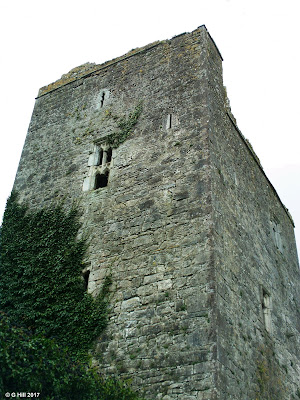 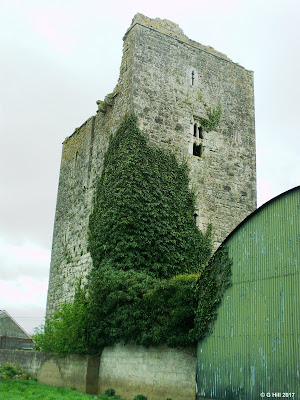 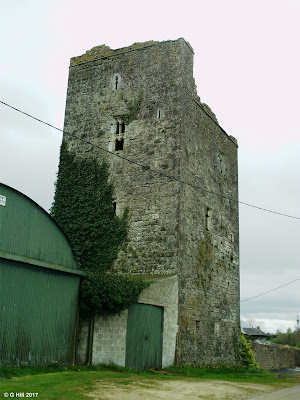 I came across this tall sturdy tower house on route to Kilfane Church (see post here) It is located on a side road leading out of Gowran in Co Kilkenny.

Following the Invasion of Ireland by the Normans the lands surrounding Gowran were granted to Theobald Fitzwalter the Chief Butler of Ireland. The family name Butler derived from this and from 1385 onward James Butler built some castles starting with Gowran and then subsequently others on his estate one of which was Ballyshanemore. The castle was in their possession until the Cromwellian invasion in 1650 in which nearby Gowran castle (the main residence) was very badly damaged. Ballyshanemore appears to have fared better and the ruins have survived well enough to this day. A particularly interesting feature is the double lit ogee headed window positioned in the North facing wall. Although there are several other windows present this one is the most decorative. Unfortunately it is not possible to view the interior with its reported large fireplaces as the entrance is completely blocked up. A shame really as it would be interesting to see what else has survived within. The castle has now been incorporated into some farm outbuildings and there was an open field gate when I visited so I could have a look at the out of view East wall. Sadly the field here just beyond the gate seems to have been misused and was strewn with litter some of it not very pleasant.

A nice example of a fourteenth century tower house then and well worth a visit if in the area.

To find the ruin take the M9 heading South and exit at Junction 7 and at the top of the exit ramp take the left hand exit for the R448 (signposted for Thomastown). Continue straight through the next roundabout and on the subsequent roundabout turn right on to the continuance of the R448. This will lead you to the village of Gowran and once past the huge Gowran Collegiate Church (see earlier post here) take the first left onto Mill Road and you will find the castle 500m along on your left.