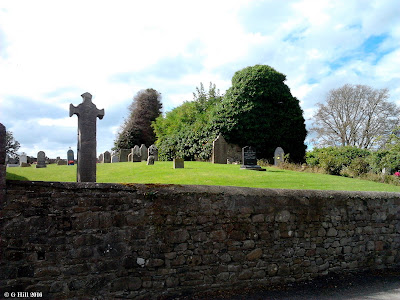 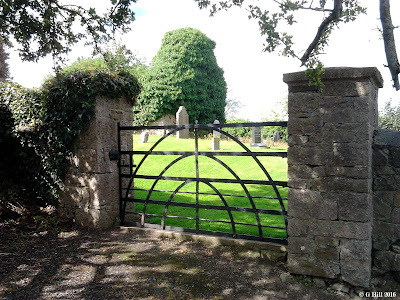 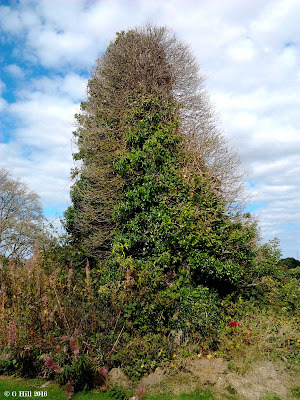 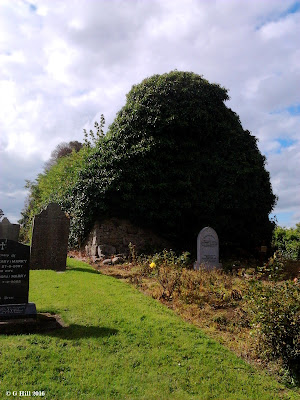 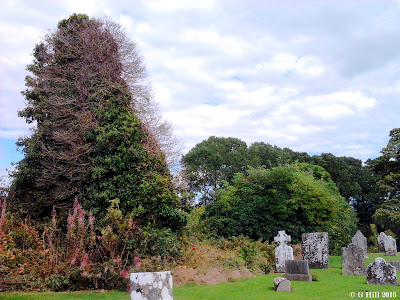 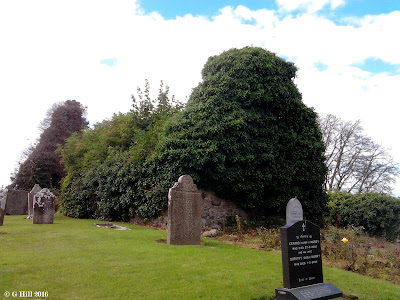 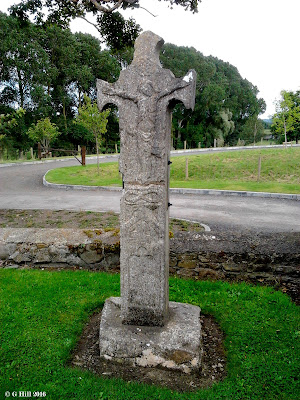 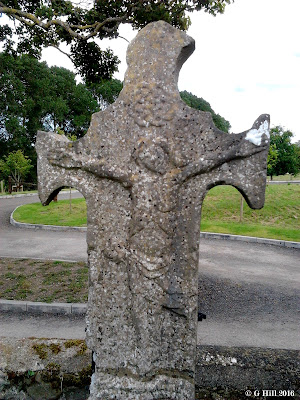 Above Image: West face of cross 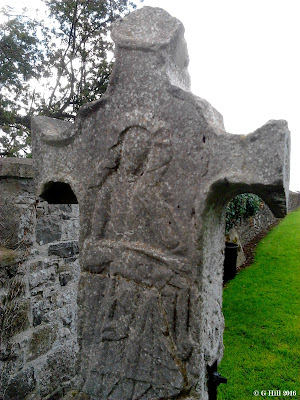 Above Image: East face of cross

Here we find another Church ruin that is slowly being entirely covered in creeping ivy and really should be cleared as the graveyard around it is so well manicured. It’s almost as if it is being deliberately let go to ground.
The Church thought to date to the mid 1600’s is built on hallowed ground that far precedes its construction. Both gables still stand although as mentioned they are hidden by overgrowth. The North and South walls have almost completely collapsed and are also overgrown. A long narrow window most certainly exists in the East gable although it's hard to see it clearly at the moment.
This is a particularly pleasant part of the county and the Church is positioned on elevated ground above the River Nanny a small distance from Balrath crossroads. If maintained this would be a very striking ruin especially viewed from the main road. A new development Ballymagarvey Viillage is the access point and you find the graveyard enclosure just before the entrance to this. There is room to park outside the walls and a metal gate offers entry to the site. I walked around the ruins but found myself shaking my head at the condition of them. I realise that there are so many of these old churches around but I myself think that these historic remnants should be given room to breathe as they can illustrate the history of this land for future generations. (I'll step off the soapbox now!)
Just inside the South enclosure wall a large stone cross is to be found. This is the sixteenth century Balrath Cross which was moved to this site during the widening of Balrath crossroads where it had stood as a wayside cross for hundreds of years. The cross is very detailed with a Pieta on its East face. There is also an inscription here stating it was "beautified" in 1727 by Sir John Aylmer and his wife Catherine. A crucifixion is carved on the West face and there are carvings of masks on the arms.
This is a very quiet and reflective spot which we visited after revisiting Athcarne Castle (see updated previous posthttp://irelandinruins.blogspot.com/2011/08/athcarne-castle-co-meath.html )

To find the ruin and cross take the N2 heading North from the M50 motorway and drive until you reach a roundabout at Ashbourne. Turn left here continuing on the N2 Northbound for approx. 11KM. You will reach a left hand turn onto the R153 for Navan. Turn here and 200 metres along this road take the first left into Ballymagarvey Village. You will see the ruin on your right hand side and room to park at the enclosure wall.
Posted by Castlehunter at 13:15