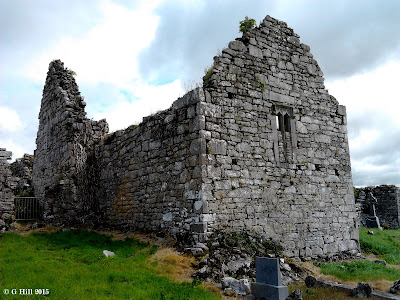 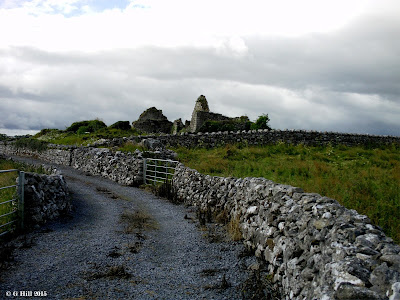 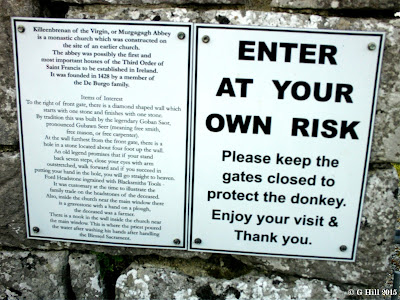 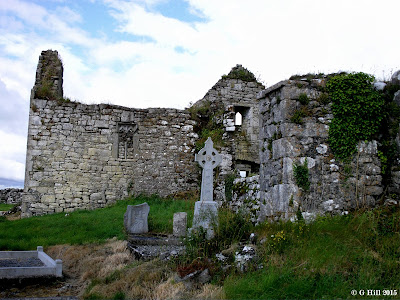 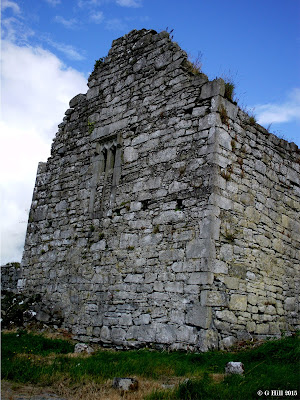 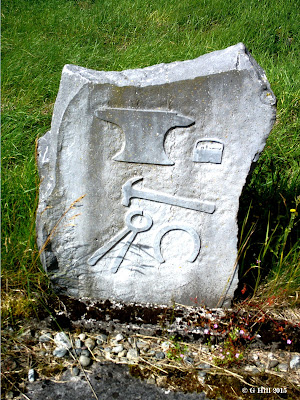 Above & Below Images: Interesting grave stones 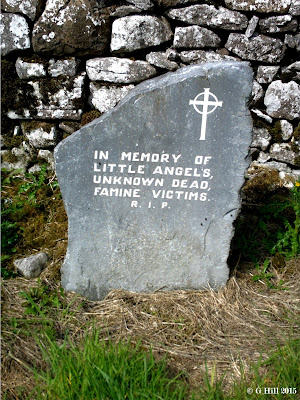 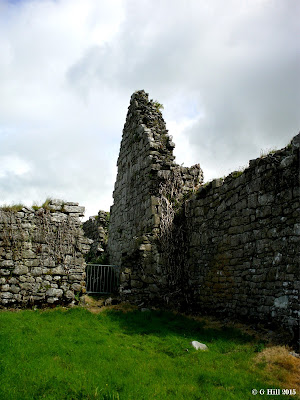 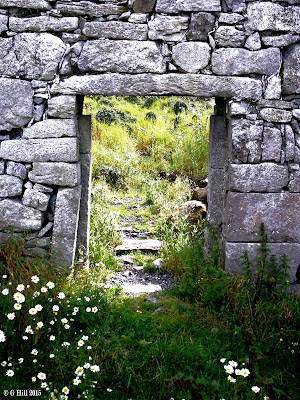 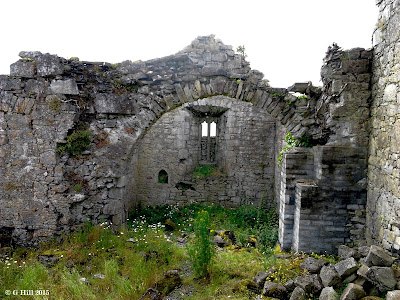 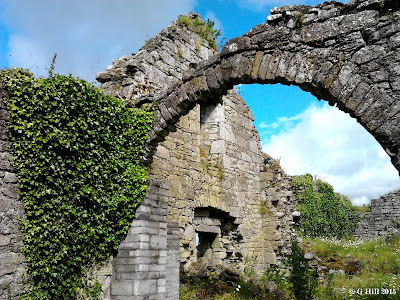 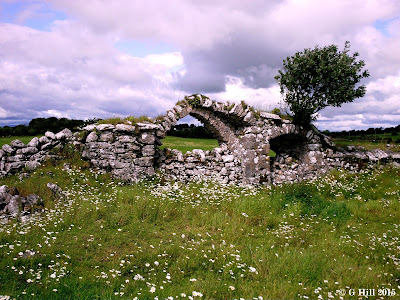 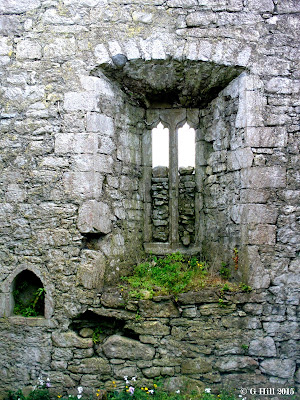 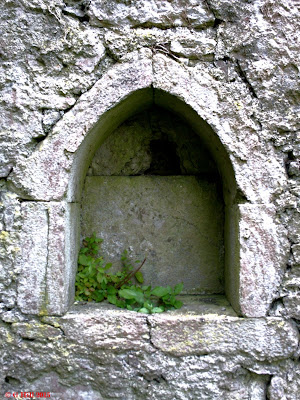 Above Image: Alcove in South wall 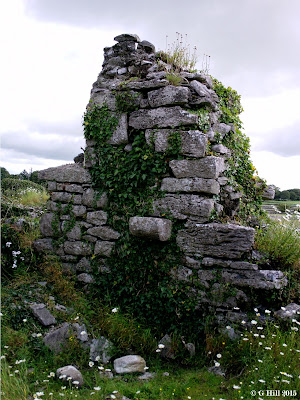 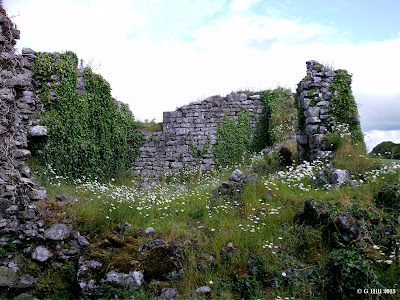 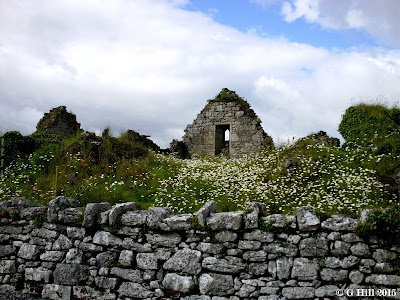 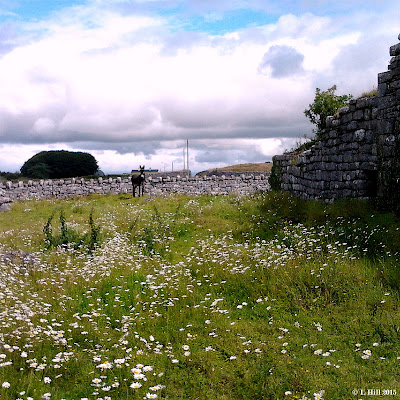 Above Image: The famous Donkey!


We were on our way to view Shrule Castle (see earlier post here) when I spotted a sign pointing to this Abbey so not knowing what it was like we decided to take a diversion on our return journey to check it out.

A winding country road brought us a view of the ruins in the near distance adjacent to the Lough Nakill turlough. (A turlough is a sort of disappearing lake which fills up in wet weather and empties during dry spells and with only a few exceptions is peculiar to Ireland). A narrow track then brings you down to the ruins which are located within a graveyard enclosure.
The history that I could gather regarding the Abbey which was originally known as Killeenbrenan or Moorgagagh (the adjacent townland) is that It is thought to have been constructed on the site of an earlier Church sometime before 1428 by one of the De Burgo family for the Third Order of Franciscans. It was a noted Abbey being mentioned in many records of the time and is considered to be the first Franciscan house in Ireland. According to local lore it survived the dissolution but came under attack by Cromwell’s forces in the mid 1600’s. The monks escaped when forewarned of the oncoming troops.
Being in such an off the beaten track location we didn’t expect to find many sightseers and in fact we didn’t except for the presence of a donkey which must be a very special one as there is a sign posted outside the Abbey along with some architectural details advising to keep gates closed to protect this donkey. It also states “enter at your own risk” presumably an insurance disclaimer as I would not suspect the Donkey of being a man-killer.
The location of this site is in a particularly beautiful part of Mayo and there is a great sense of peacefulness in the air. The Abbey is in a fairly poor state, parts of the walls having crumbled, but two gables still stand tall one South facing the other West facing. The donkey is positioned in the field with the West gable. He seems a bit indignant to visitors and snorts if you approach so we left him to his own devices. To the left of the West gable a slightly sunken doorway enables you to enter what remains of the inside. A single arc of stone is all that is left of an inner archway but it is quite dramatic. On the inside of the South gable there is a small alcove where the priest would have washed his hands  before handling the sacrament.
There are a couple of interesting headstones in the graveyard including one for a blacksmith depicting the instruments he would have used in his trade. In the wall furthest from the entrance gate there is a hole in the stone in the wall about four feet from the ground. Legend has it that if you walk towards it with eyes closed and your arm outstretched and manage to put your arm through the hole you will most certainly go to Heaven. It’s some feat as the ground is very uneven underfoot and if not careful you are likely to trip over something.
I found the visit rewarding and in a very bucolic landscape. Well worth your time to detour to.
To find the ruins drive northwards from Shrule towards Kilmaine and about 2KM out of Shrule you will see a left hand turn with a white sign pointing to Kille Abbey Cemetery. Turn left down this road and follow it until you spot the ruins on your left. You will see a narrow track leading down to it. Parking is tight at the gate but turn the car facing back towards the road and you should have no problem.
Posted by Castlehunter at 13:37