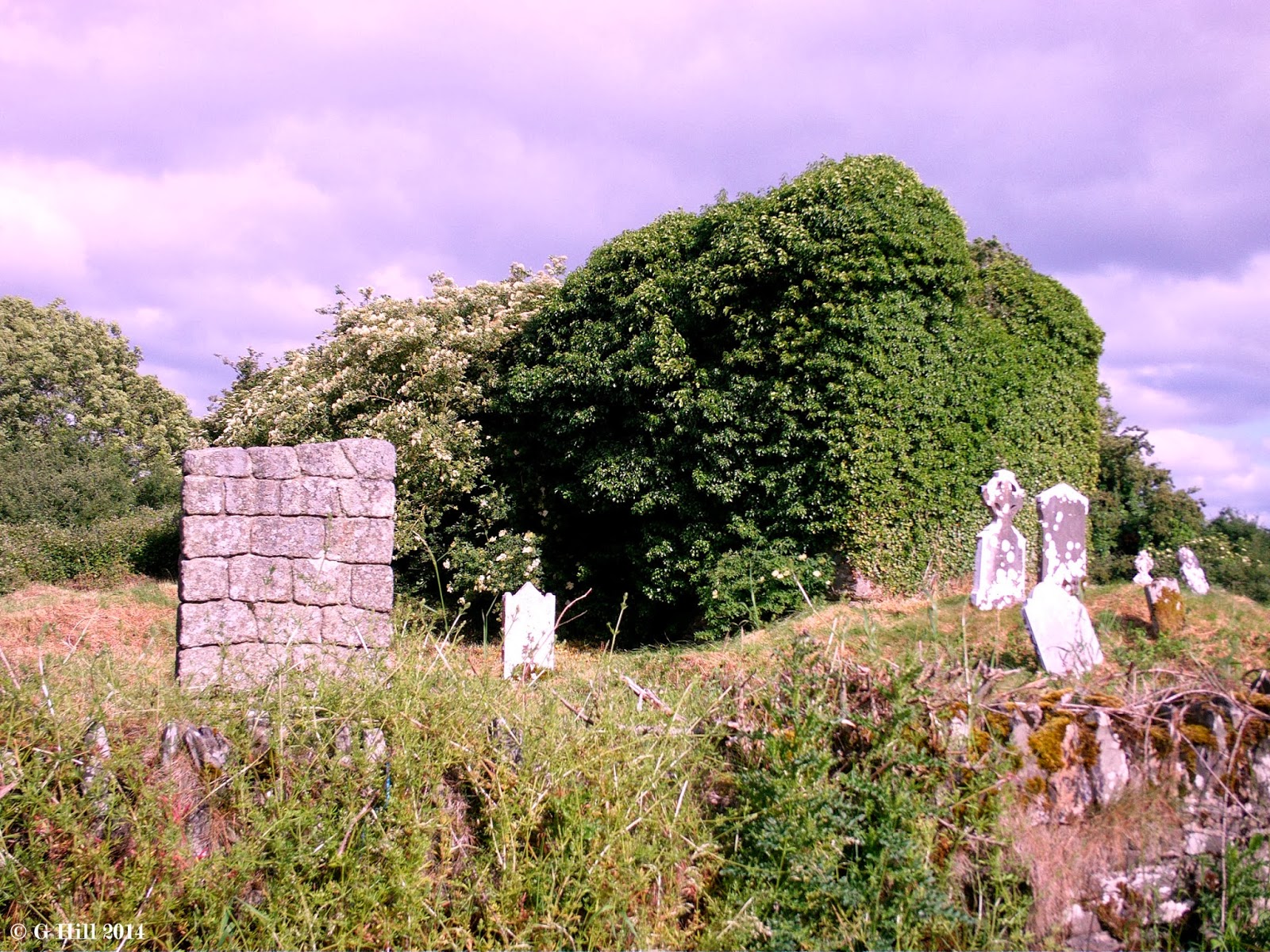 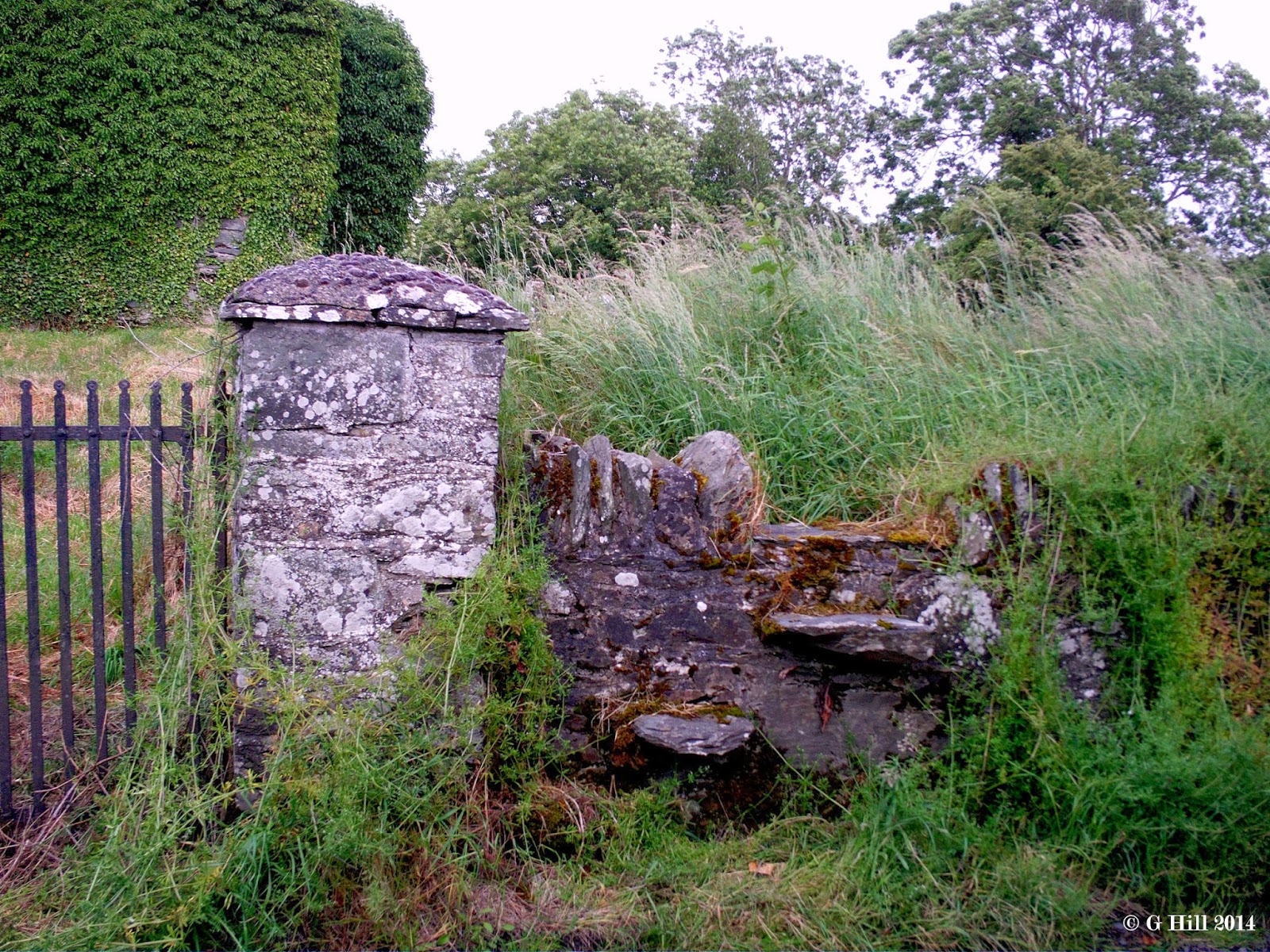 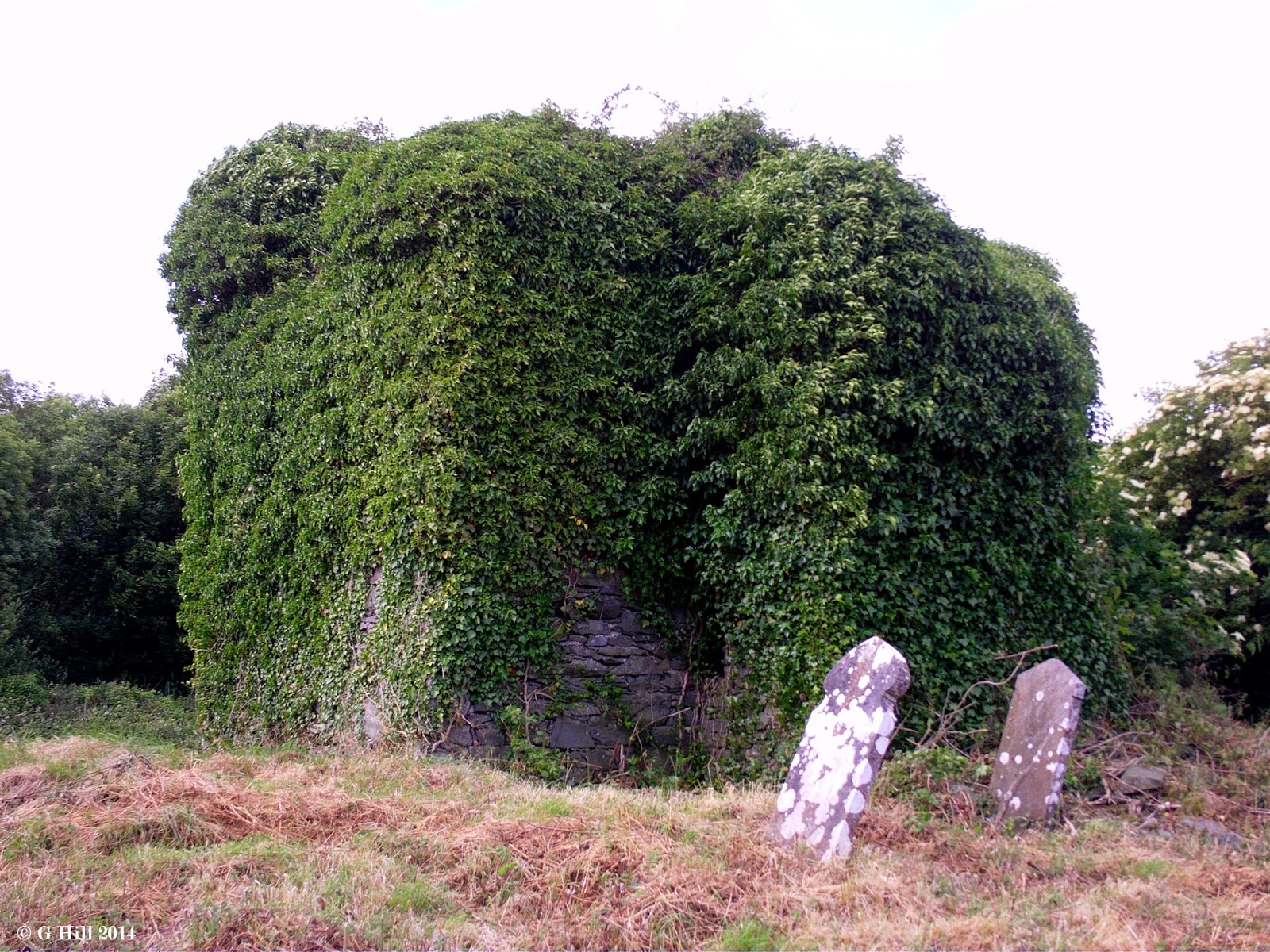 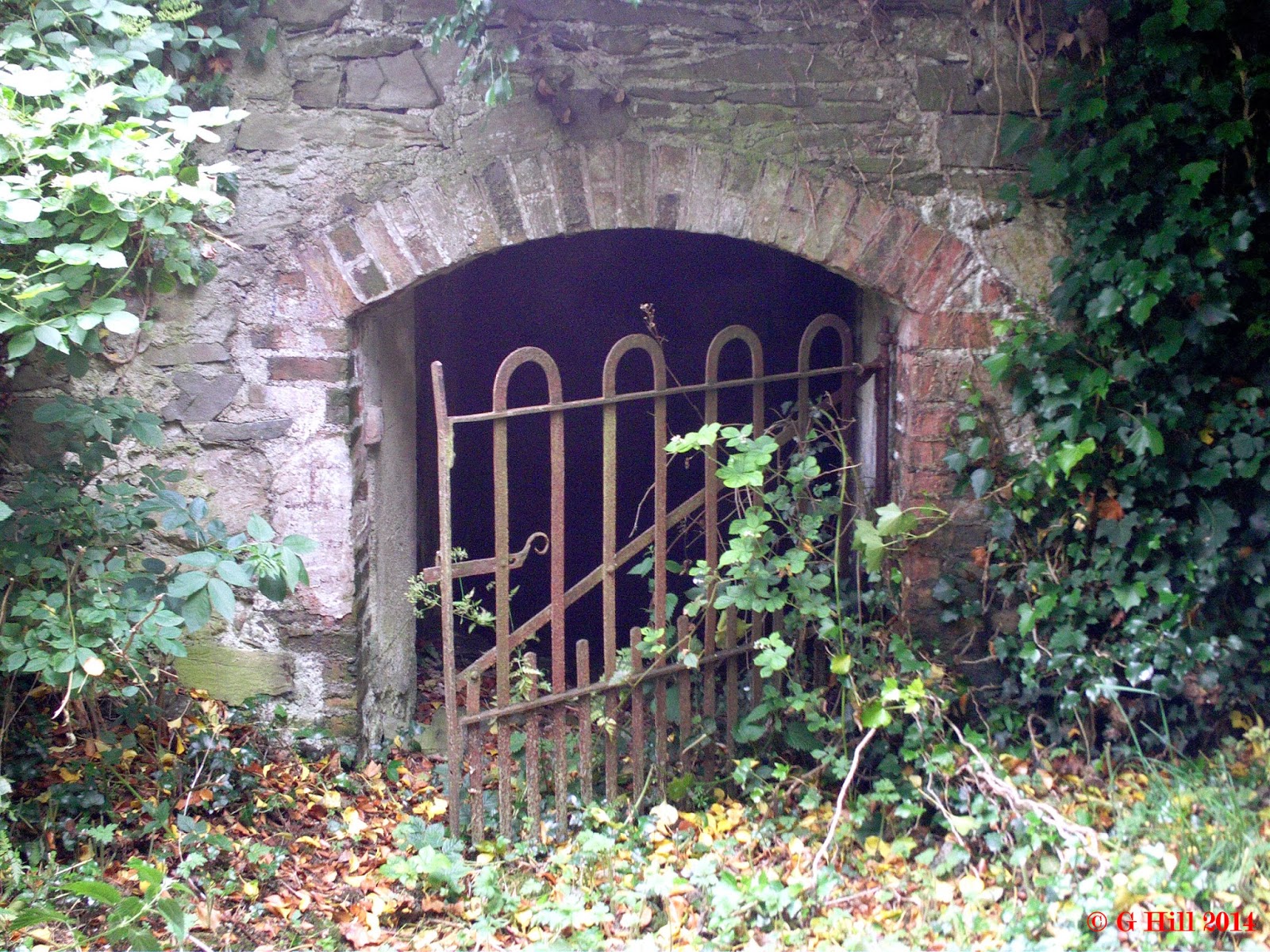 Above Image: The chamber entrance 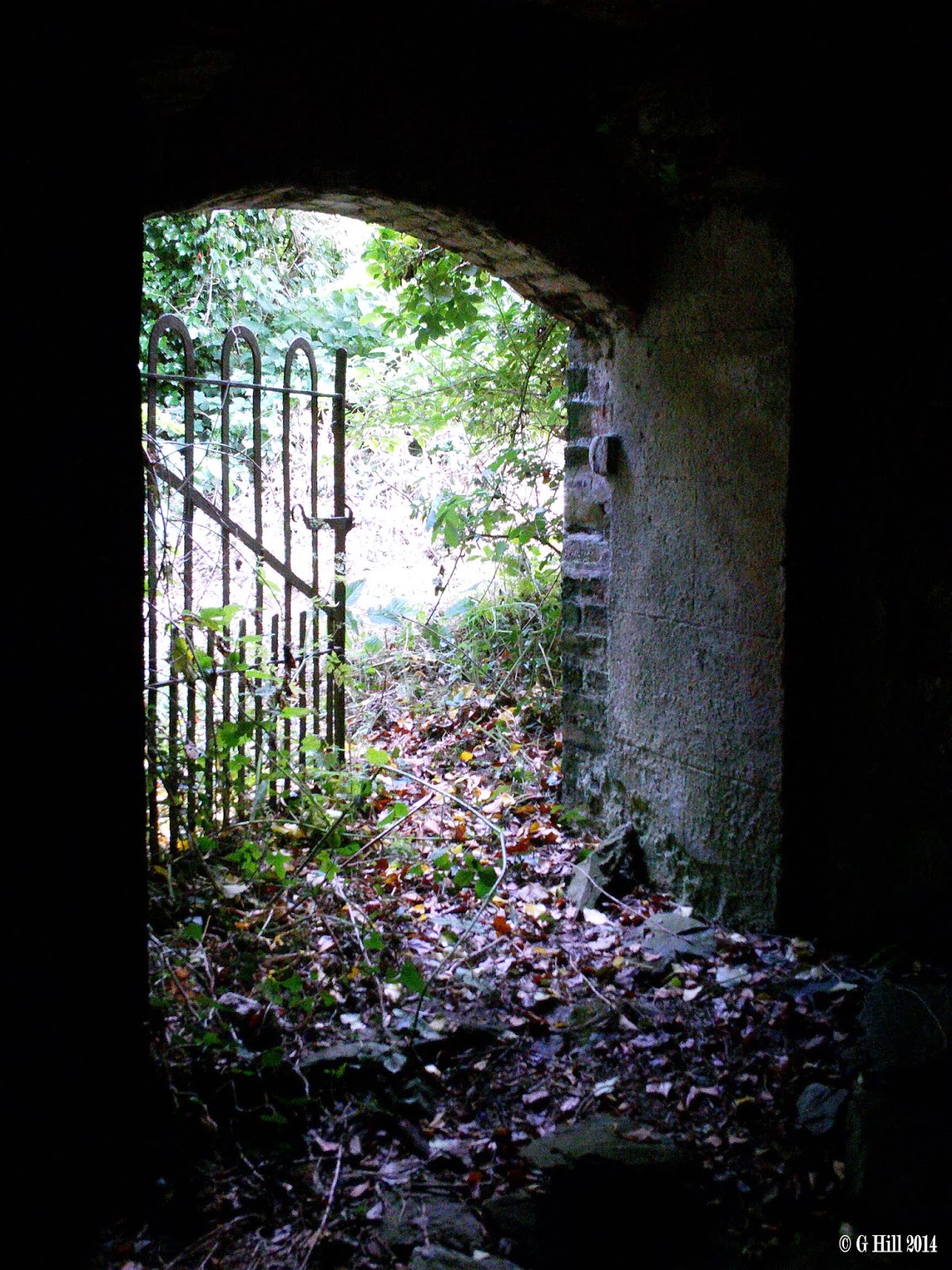 Above Image: View out from within the chamber 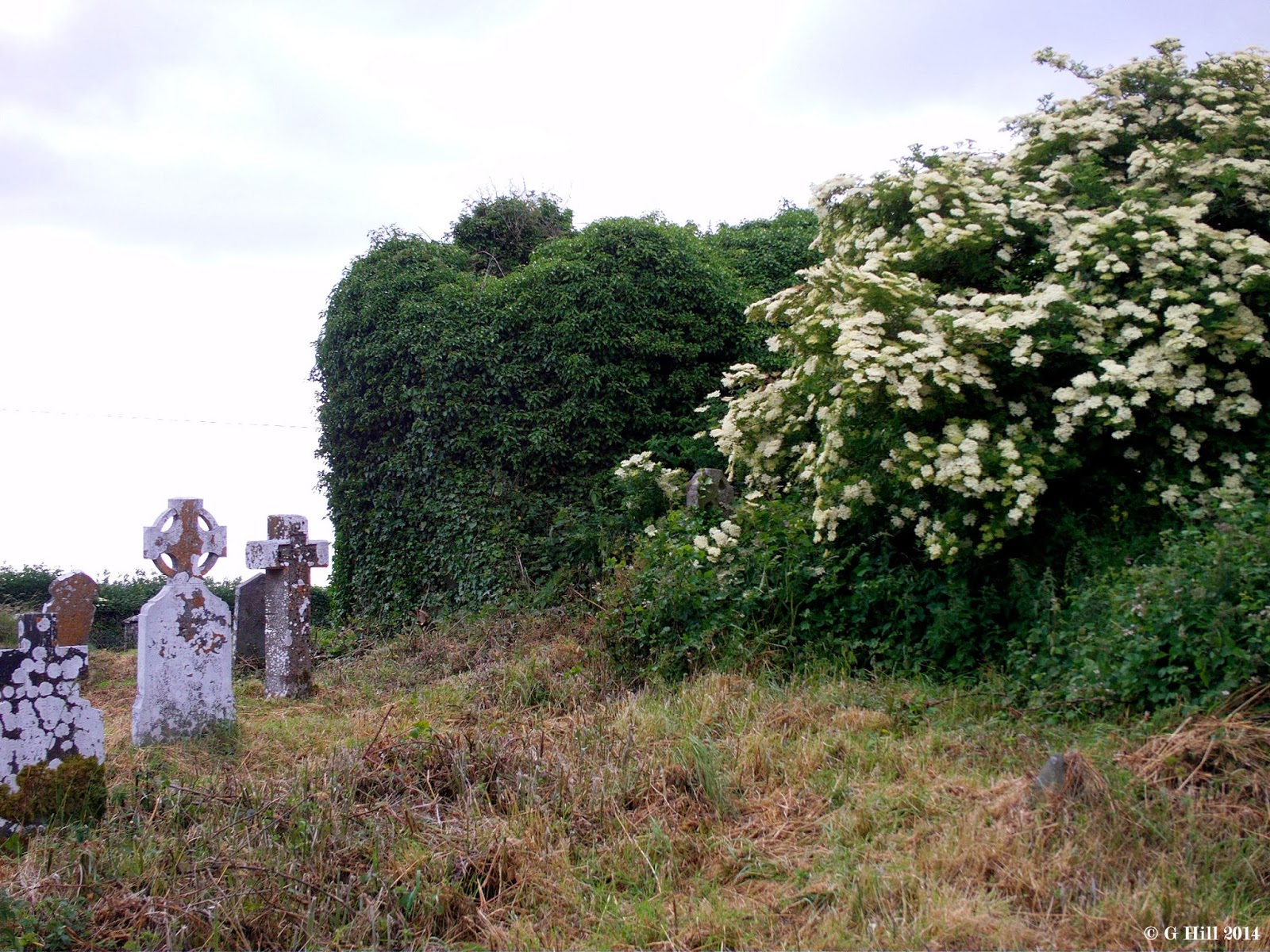 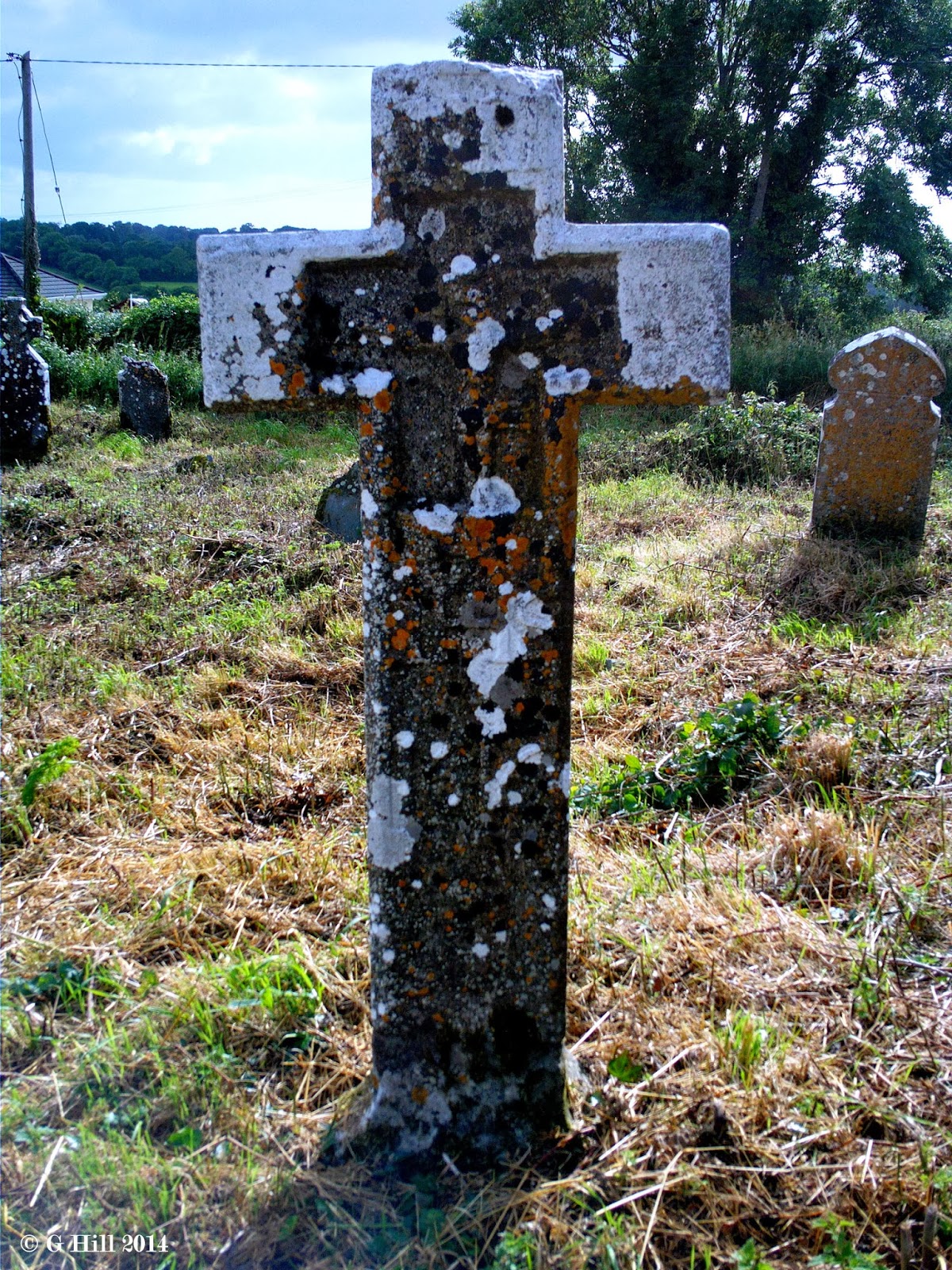 Above Image: East face of the cross 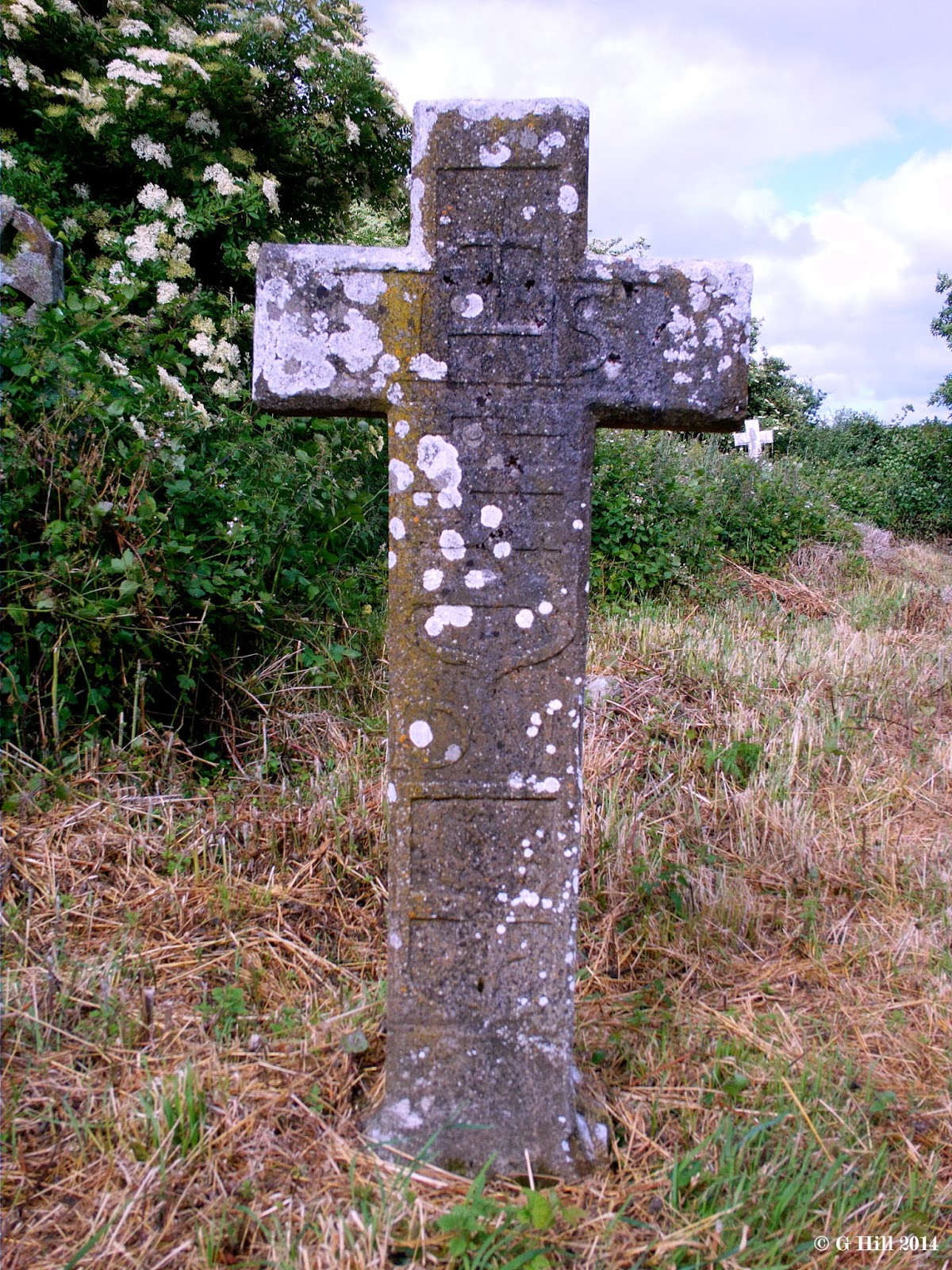 Above Image: West face of the cross 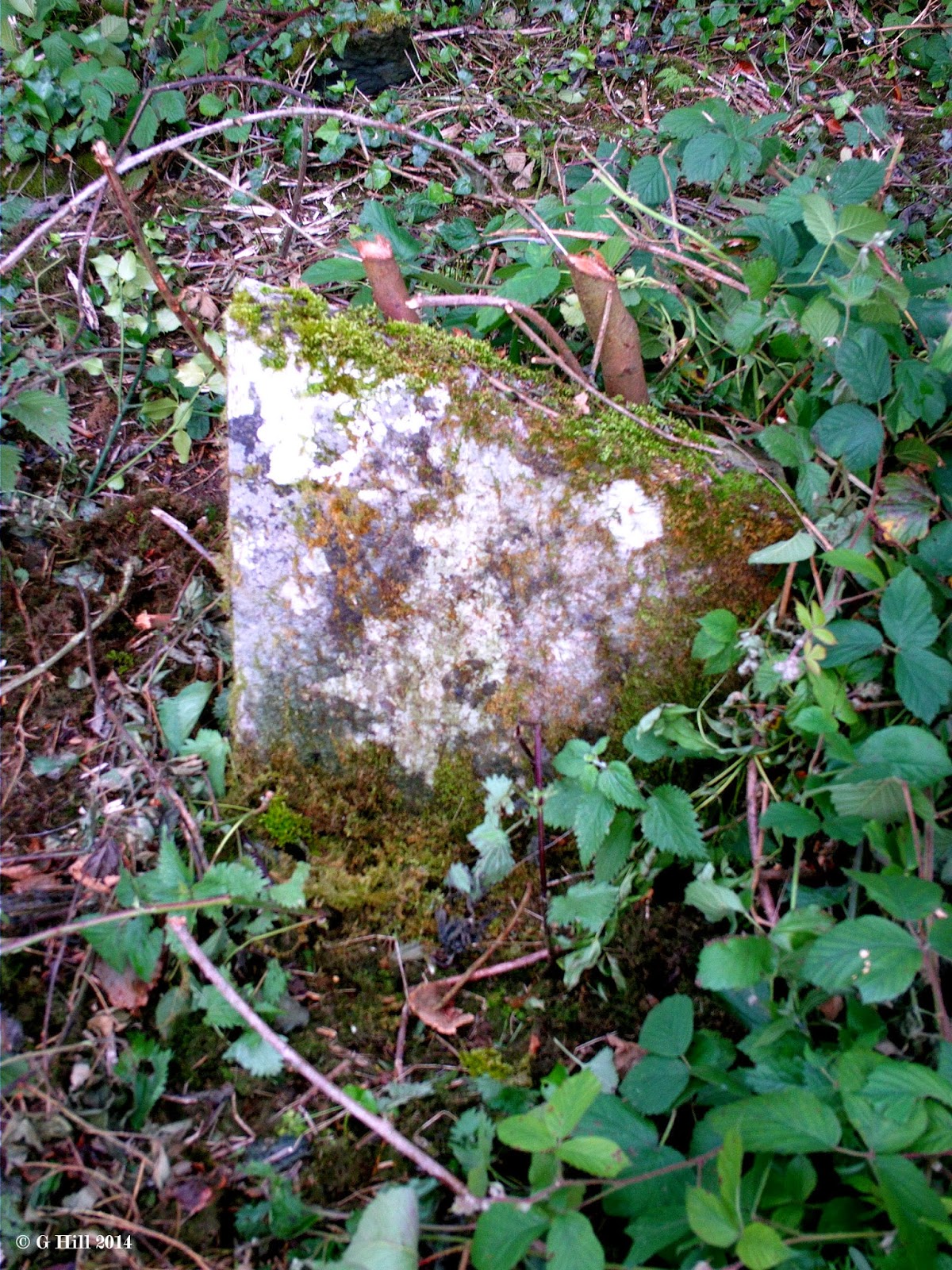 Above Image: One of the ancient stones 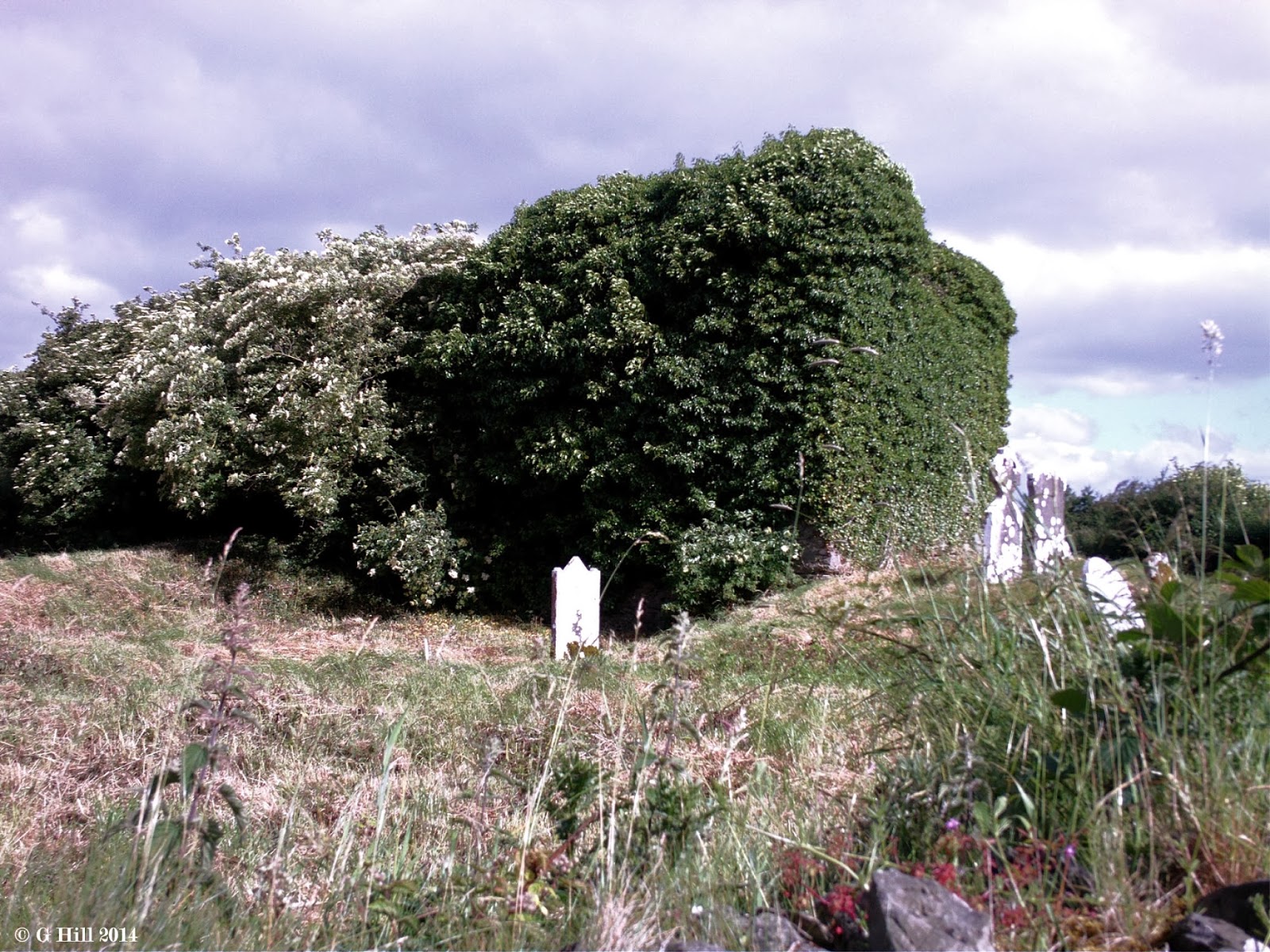 This one is disappearing quickly! The medieval Church of Tipper is almost entirely covered in ivy with only partial walls visible and yet it is still worth a visit. It is certainly an eerie spot even on a bright sunny day.
The first mention of a Church here was by Pope Innocent III in 1216 who referred to the Church at Tobar (translates to "Well" indicating the presence of a holy well). The name Tobar has changed over time to Tipper. This probably one time parish Church stands on elevated ground within a graveyard enclosure and appears even under heavy vegetation to have both gable ends standing. The structure measures approx. 18 feet end to end with a gap in the centre where walls have collapsed. Indeed the ruins are so heavy with ivy that I think it may in time cause further damage.
Within the central and uneven interior there is a chamber in the Western side with an iron gate. The gate is unlocked so it's possible to enter the chamber. It's quite dark in there but a light will reveal the vaulted ceiling above. On this occasion we had only a small penlight torch with us. The chamber is not that big but it certainly oozed a very creepy atmosphere, probably the claustrophobic space, but still it gave us the feeling of not wanting to linger around too long in there. We tried to photograph the ceiling but to no avail as our penlight was useless and no camera setting would capture it.
The graveyard was assessed in the past and some interesting items uncovered including a very decorative cross that has now been reset and now stands alongside the ruins. It is dated 1616 and is believed to be a commemoration to one John Delahyde and his wife Margery Walsh. One of the designs upon it depicts the crucifixion.
The enclosure seems to be deteriorating somewhat with dense weeds and such running fairly rampant. The entry gate in the Western boundary wall is so tied up with overgrowth that it difficult to open but at least there are rough stiles on either side one of which affords easy enough access.
Once inside the enclosure the ground is very uneven underfoot but it is still possible to carefully circumnavigate the ruins and see some of the ancient stones that lie hidden in the weeds.
All in all a bit of a sad state of affairs then but if the ivy could be cleared it would make such a huge difference. However having said that if you happen to be in the area do make a stop and check out the creepy chamber within.
To find Tipper ruins take the N81 Dublin to Tullow road and as you exit the main street in Blessington heading south there is a right hand turn signposted for the R410 to Naas. Take this turn and drive for approx. 8KM until you reach a crossroads. This has two right hand turns in close proximity. The first is for the L2019 to Kill, but it is the second that you need to take signposted for the L6035 to Johnstown. Drive for approx. 600m and you will see the graveyard on your right. You can park on a slightly wider part of the road a little way past the enclosure.
Posted by Castlehunter at 12:48